Battle of the Neman 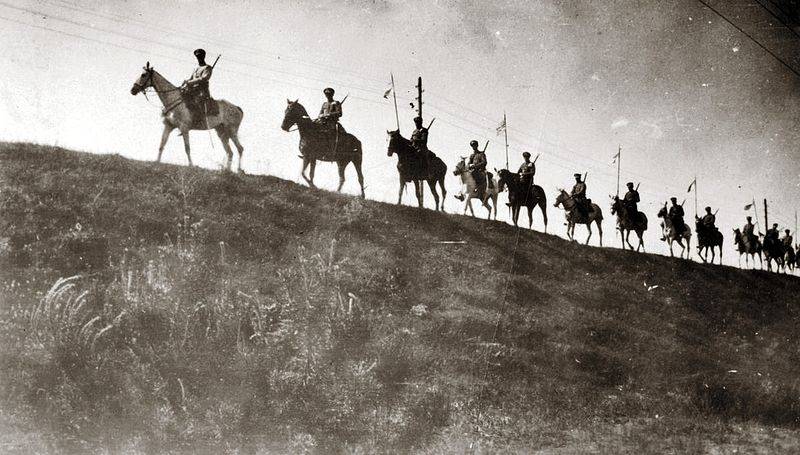 100 years ago, in September 1920, Polish troops again defeated the armies of the Western Front under the command of Tukhachevsky. The dream of a "red Warsaw" had to be abandoned. Moscow abandoned its initial demands on Warsaw and went to a "bawdy" peace, yielding Western Ukraine and Western Belarus to the Poles, and also paid an indemnity to Poland.

After the Vistula disaster

After a heavy defeat on the Vistula, Tukhachevsky's troops by August 25, 1920 stopped on the line Augustow - Lipsk - Kuznitsa - Visloch - Belovezh - Zhabinka - Opalin. The northern part of the front ran west of the Neman and Shchara rivers. The Poles, despite the severe defeat of the Russian troops, also stopped. Communications in this area were destroyed, it was necessary to tighten up the rear, restore railways and bridges, replenish units and establish supplies. The strike of the Polish army aimed from south to north with access to the Prussian border in order to cut off the shock group of the Western Front has exhausted itself. It was necessary to regroup the troops, it took time. At the same time, the Poles retained the initiative and prepared to continue the offensive. The Polish army numbered about 120 thousand soldiers, over 800 guns and 2500 machine guns.

The Soviet troops were even more exhausted. The victorious battles in Belorussia, the campaign against Warsaw, the defeat on the Vistula and the retreat, often chaotic, bled the Western Front. Tukhachevsky's armies lost most of the soldiers (mainly prisoners and internees), materiel, and artillery. It was necessary to reorganize and replenish the parts, supply them weapons, ammunition, equipment, etc. The Soviet command took urgent measures to replenish the greatly thinned troops on the front line. The rear units and institutions were disbanded, which had grown greatly, their personnel was sent to combat units. In early September, the remnants of the broken Soviet units, which made their way to the east through forests, far from the main roads, reached their own. It was necessary to bring them to their senses, arm, uniform, return to their units or include in others. It was also necessary to build fortifications on new lines of defense. Then up to 30 thousand people returned to the Western Front, who were interned in Germany. The front carried out mobilization in the rear areas.

As a result, Tukhachevsky was able to almost completely restore the combat strength of the front (although its quality was worse). The western front included 6 armies (3rd, 15th, 16th, 4th, 12th and 1st Cavalry), 18 rifle, 4 cavalry divisions, 1 rifle and 4 cavalry brigades. All in all, these troops had about 95 thousand bayonets and sabers, about 450 guns and 2 thousand machine guns. The 4th Army was restored, most of whose troops fled to the territory of East Prussia. The administration of the 4th Army, which had lost its troops, led the Mozyr group. The 4th Army became the front reserve.

Plans of the Soviet command

The Soviet leadership believed that in connection with the failures on the Western and Southwestern Fronts, it was necessary to abandon the plans for Sovietization of Poland and eliminate the threat from the south before the onset of winter. Destroy the White Guards in Northern Tavria and Crimea. The seat of the White Army in the Crimea was very dangerous, since at that time a new wave of peasant war began throughout Russia. Therefore, on September 21, 1920, the Southern Front was re-formed. Since September 27, it has been headed by the famous Soviet statesman and military leader Mikhail Frunze. The best divisions were sent to the Southern Front. It was replenished first. On September 26, they were withdrawn to the reserve and then sent to the Southern Front and the 1st Cavalry Army of Budyonny. The southern front received two strong mobile formations: the 1st and 2nd Cavalry armies. As a result, the Western Front has lost its primary importance for Moscow.

The military command, despite the disaster that had occurred (based on the errors of the command), believed that the troops could still return the strategic initiative and take Warsaw. Tukhachevsky craved revenge. At the first stage, the offensive of the Red Army was to return Brest and Bialystok, defeat the opposing Polish troops and develop an offensive on Lublin and Warsaw. It was proposed to again throw the troops of the 12th, 14th and 1st Cavalry armies on Lvov, pulling the Polish forces from the Warsaw direction to the south. Meanwhile, the right wing of the Western Front will again launch an offensive against Warsaw. However, the commander-in-chief of the armed forces of the Soviet Republic, Sergei Kamenev, was against the new adventure. He was against the involvement of Budyonny's army in the battle for Lvov and demanded to leave it in the Grubieszow area in order to threaten with a strike on Lublin. It is also worth considering that in the battles in the area of ​​the Lviv fortified area and in the battle of Komarov, the cavalry divisions suffered serious losses, were physically and financially exhausted. Only about 1 thousand horsemen remained in the 8st Cavalry Army. In addition, the Polish 3rd Army, supported by part of the 4th Army, defeated the Soviet 1th Army on September 6–12. Soviet troops pushed back to the east of the river. Western Bug south of Brest-Litovsk.

However, Kamenev and Tukhachevsky believed that these enemy successes were temporary. That most of the Polish army is concentrated on the southern flank and the Poles will not be able to fend off a powerful blow in the north. On the northern flank of the Western Front, there were 3 armies (3rd, 15th and 16th), up to 14 divisions. A new offensive was planned for November. Intelligence reported that the enemy was tired of fighting and was not preparing a new major offensive. The intelligence and command of the Western Front were wrong. The Poles were ready for a new battle and rushed forward.

The 3rd Soviet Army under the command of Lazarevich covered the Grodno direction. It consisted of 24 thousand people and more than 70 guns. The 15th Army of Kork covered Bridges on the Neman and Volkovysk. It consisted of 16 thousand soldiers, more than 80 guns. The 16th Army of Sollogub (from September 21, the troops were led by Cook) defended the road to Slonim and Baranovichi. There were 16 thousand people in the army. In the south of Belarus, in Polesie, the newly created 4th Army of Shuvaev was stationed. Its divisions numbered over 17 thousand people. 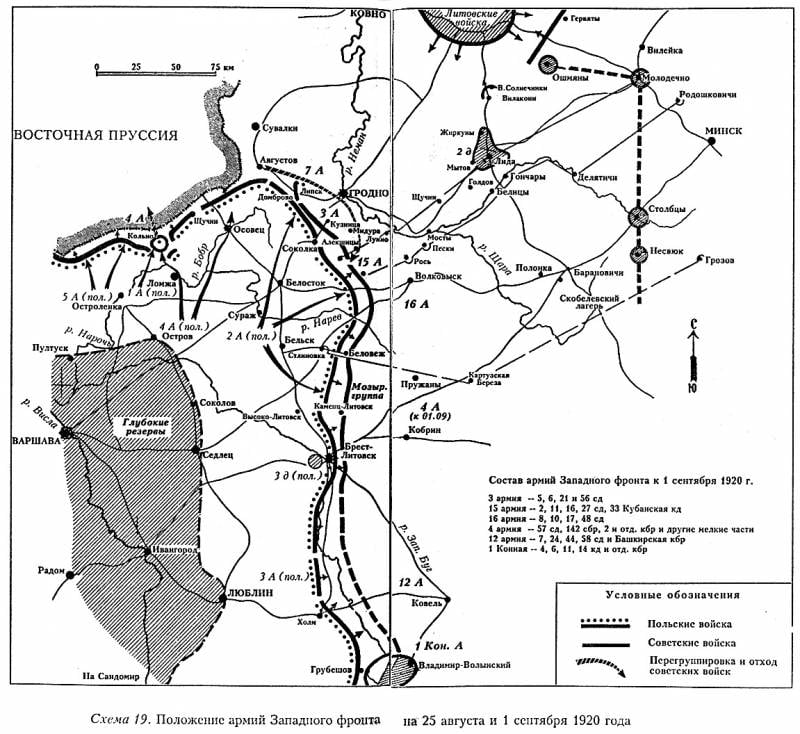 The Polish command was preparing a new offensive in Belarus. On August 27, 1920, after the end of the battle on the Vistula, the Polish commander-in-chief Pilsudski ordered the regrouping of the troops of the 2nd and 4th armies of Rydz-Smigla and Skerski. He strove to end the war in Poland's favor. On September 10, at a meeting with the commanders of the 2nd and 4th armies, Pilsudski announced that the main blow would be delivered in the Grodno-Volkovysk region. At the same time, a shock group was formed on the northern flank of the 2nd Army in order to march through Lithuanian territory to bypass the right flank of the Soviet front and in the Lida area to go to the rear of the enemy. Further, the Reds were going to be thrown back into the Polesie swamps. Poland wanted to inflict a decisive defeat on Russia and push the eastern border beyond the "Curzon line".

On September 19, 1920, Pilsudski's order was issued with detailed tasks for all armies and groups. The 2nd Army of Rydz-Smigly (6 divisions, 2 cavalry brigades and a group of heavy artillery) aimed at Grodno. Heavy artillery was required to capture the Grodno fortress. The 2nd Army was the most powerful in the Polish Army: over 33 thousand people in combat units (about 100 thousand in total), 260 guns, about 1 thousand machine guns, 16 armored cars, 18 aircraft, more than 350 vehicles. The Northern group of General Osinsky (former general of the tsarist army), consisting of the 2th division and the Siberian brigade, was allocated from the 17nd Army. The task force was to make a dash across Lithuania to the Lida area. Skersky's 4th Army advanced on Volkovysk and south of it. It consisted of 4 divisions, about 23 thousand people in combat units (more than 50 thousand in total), 170 guns, 18 armored cars and 5 aircraft. The soldiers were well armed and trained. The reserve of the Northern Front (2nd and 4th armies) had one infantry division and a cavalry brigade.

Polish troops had some advantage in manpower in the direction of the main blows. The qualitative composition of their armies was much better, as was the fighting spirit. Polish soldiers were encouraged by their successes. The Red Army men were demoralized by the defeat. Among them there were many poorly trained recruits, peasants from the regions of Russia, engulfed in uprisings, that is, those who had weak fortitude, motivation, and inclined to flee. 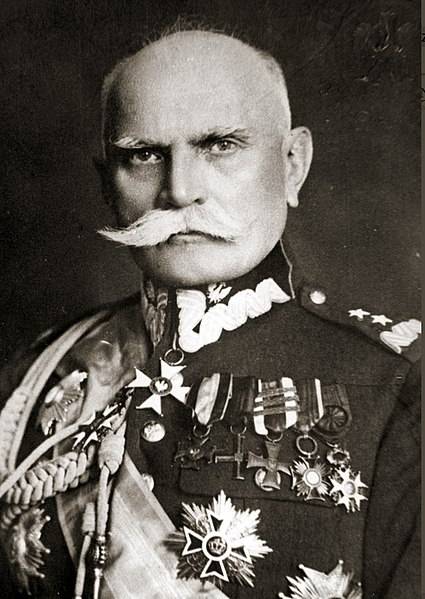 Battle of Rostov
The disaster of white Odessa
How Slashchev Crimea defended
Dono-Manych battle
The death of the Northern Army Miller
Why Western agent Kolchak is turned into a hero and martyr of Russia
The defeat of the army of Denikin in the battle of Tikhorets
How did the Ice Siberian campaign end
The fall of the White Kuban
Agony of White Novorossiysk
The death of the Kuban army
Denikin's resignation
Far Eastern Republic and the Japanese threat
Polish "liberation" campaign in Kiev
Baku “Blitzkrieg” of the Red Army
The battle for Belarus. May operation of the Red Army
War of the Russian Army Wrangel
The first victories of the Wrangel army
The defeat of the 13th Soviet Army in Northern Tavria
Our Kiev!
The battle for Rivne. How Budyonnovtsy smashed the Polish defense
Minsk is ours! The defeat of the Polish army in Belarus
Battle for Lviv. The failure of the Red Army in Galicia
The death of the cavalry group Rednecks
The fierce battle for the Kakhovsky bridgehead
The defeat of the landing group Ulagaya
"Miracle on the Vistula"
How Tukhachevsky destroyed his armies on the Vistula
Battle of Komarov. Defeat of the 1st Cavalry Army
Bukhara Blitzkrieg Frunze
"The danger of Wrangel is becoming enormous ..."
Battle on the Lower Dnieper
The last offensive of the Russian army