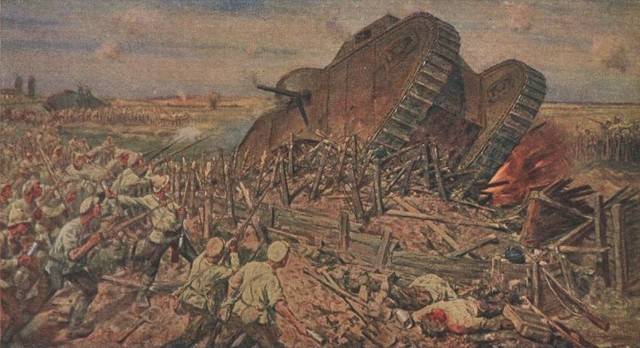 The assault on the Kakhovsky bridgehead lasted five days and nights. Soviet artillery met the White Guards with deadly fire. Multi-row barbed wire obstacles had to be cut with bayonets. Attempts to break through the defenses of the Red Army with the help of tanks also did not lead to success. The Red Army soldiers learned to beat enemy tanks, rolling out light guns for direct fire.

August battle on the Lower Dnieper

A group of Reds on the Dnieper launched an offensive on August 20, 1920. The blow fell on the 2nd Army Corps of General Vitkovsky. Blucher's troops (51st and 52nd rifle divisions, Sablin's combined cavalry division) developed the offensive, but slowly. The White Guards stubbornly fought back, counterattacked. They looked for gaps in the battle formations, threw their cavalry into them. In addition, the Red command feared for their open flanks and waited for the group advancing in the Perekop direction to achieve success. By the evening of August 27, a group of Reds in the Melitopol direction reached the Ivanovka - Nizhnie Serogozy - Novaya Aleksandrovka line. At this point, three days were stubborn battles with White, who tried to seize the initiative. The Latvian division, reinforced by the 15th division, was advancing on Perekop. The Reds advanced slowly and by August 27 they reached the village of Magdalinovka. The famous Latvian rifle division was greatly weakened in battles and lost its former power.

Against the left flank of Blucher's group, the Whites of the 27th concentrated a strike group in the Demyanovka area, which included the Kornilov, 6th Infantry and 1st Cavalry Divisions. The group was led by the head of the Kornilov division, Skoblin. The right flank of the Reds (Sablin's cavalry) was opposed by the 2nd Cavalry Division, in the center was a separate cavalry brigade. The white command tried to cover the flanks of the enemy, who was breaking through to Melitopol. Wrangel and Kutepov considered the situation very alarming. In response, Blucher strengthened his left flank (the 52nd Division was badly battered in previous battles and was small in number). Sablin's cavalry was transferred there by forced march.

On August 21, the Reds began an offensive on the eastern flank. In the center, the infantry of the 13th Soviet Army captured Bolshoi Tokmak. But the Reds could not break through further. Kutepov's 1st Army Corps and Morozov's Don Brigade fought to the death. The villages passed from hand to hand. The Red Army was only able to push the enemy a little. Crimean journalist A. Valentinov recalled:

What our troops did was not even heroism, but something supernatural. The Drozdovites reached their climax. Under hurricane fire, they attacked in formation. Each shell pulled 10-15 people out of the chain. And every time after the break, the command "ace, two, in step!" The 1st Corps fired 40 shells a week. The Bolshevik is five times bigger ... "
The losses on both sides were great. But the White Guards resisted, again threw the enemy back. This allowed Wrangel to remove the Kornilovskaya and 6th Infantry Divisions, and then the Barbovich's cavalry corps from the eastern flank, throwing troops to the west.

Taking advantage of the fact that the whites had transferred part of their forces to the western flank and weakened their positions in the northeastern sector, the Soviet command threw Gorodovikov's 2nd Cavalry Army into the offensive. The 2nd Cavalry Army was able to break through the enemy's front in the Vasilyevka area and was heading for Orlyansk to reach Blucher's group. On August 29, when Blucher's troops in the Seragoz region fought fierce battles with varying success, Gorodovikov's cavalry reached Malaya Beloozerskaya and defeated the Don Infantry Regiment. About 2 km remained between the 60nd Cavalry Army and Blucher's troops. However, the Soviet cavalry, which had not yet recovered from previous battles, moved extremely slowly and did not have time to break through to Blucher's divisions at the peak of their success. On August 30, the White Guards increase the pressure on the left flank of the Blucher group and, after a fierce battle, force the Reds to leave the Lower Seragoz area. 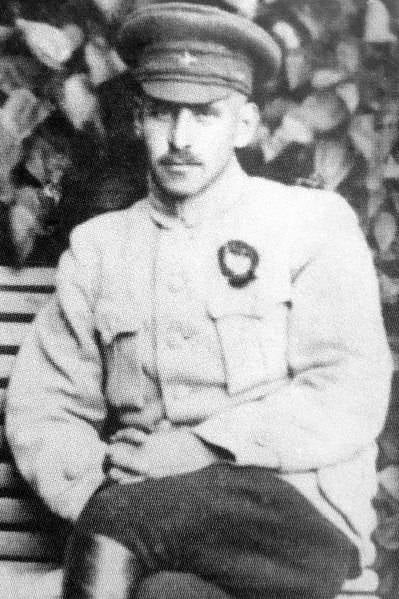 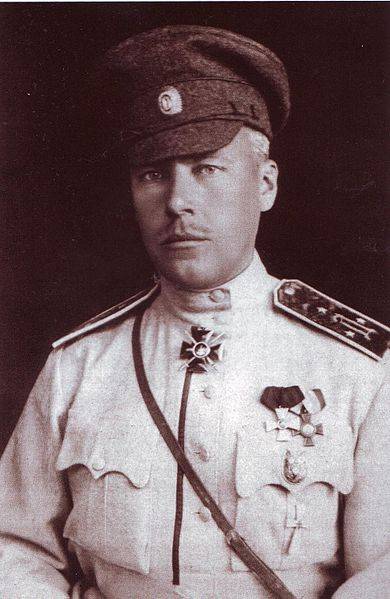 The cavalry army was at first held back aviation group of General Tkachev. The cavalry was bombed and fired upon from machine guns. Then a group of General Kalinin went to intercept the Reds - the 2nd Don Cavalry Division, a separate brigade, the Don Infantry Regiment and Markovites. The fight lasted all day. The Wrangelites were unable to defeat Gorodovikov's army, but they also did not allow the enemy to break through to help Blucher's divisions. Gorodovikov was forced to withdraw his troops to the northwest, to the village of Novoekaterinovka, in order to put the units in order. Putting a barrier against the red cavalry, Wrangel immediately threw all his forces against the Blucher group.

On August 31, the stubborn battle continued. Without waiting for the approach of the 2nd Cavalry, suffering losses and fearing encirclement, Blucher on September 1 began to withdraw troops to the Kakhovsky bridgehead. There, overhanging the northern flank of the Whites, the 1st Cavalry was also moving. She followed the westward front and began to threaten the enemy's rear. Sablin's cavalry division struck a counter blow and helped Gorodovikov's army to break through to his own. The Kornilovites and Barbovich's cavalry were pushed back. On September 2, Gorodovikov's cavalry at Kakhovka united with the 2st Infantry Division. Attacked by the enemy, the Perekop group of Reds rolled back to the Kakhovsky bridgehead.

The 2nd Cavalry was now only nominally an "army": after two August battles, only 9 thousand men remained from 1,5 thousand. It was taken to the reserve for replenishment. Gorodovikov was removed from command and returned under the command of Budyonny to the 1st Cavalry (headed the 6th Cavalry Division). The 1st Cavalry was headed by Philip Mironov. He was an experienced commander. Don Cossack by origin, veteran of wars with Japan and Germany. After the October Revolution, he supported the Bolsheviks and became one of the first holders of the Order of the Red Banner. 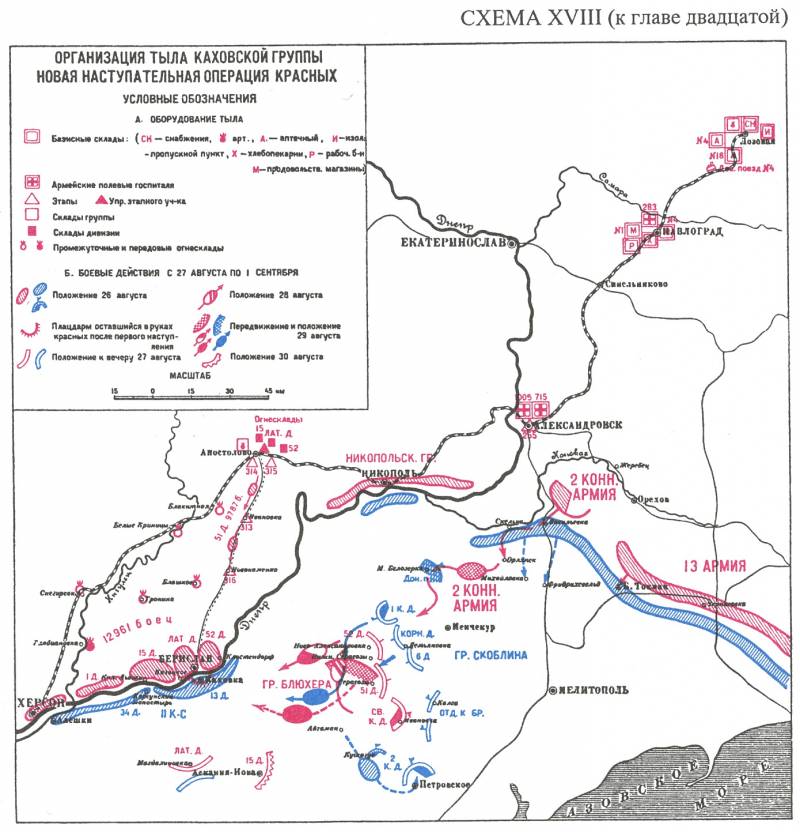 In addition to the remnants of the 1st Cavalry in reserve, in the Kakhovsky fortified area there were troops of 4 rifle divisions and one cavalry brigade. Despite the superiority of the Reds in the Kakhov area and the powerful defense of the enemy, Wrangel ordered a counteroffensive. The white command hoped that the Reds were psychologically broken by failure, and on the shoulders of the retreating they planned to develop an offensive. Destroy a large enemy grouping near the Dnieper, and then advance north. On the assault on Kakhovka went a group of General Vitkovsky, brought up to 7 thousand bayonets and sabers, reinforced by a detachment of tanks and armored cars. Tanks on the civil war front were a rare occurrence and bore personal names, like ships and armored trains: "Suvorov", "Kutuzov", "Skobelev", "Ermak", "For Holy Russia".

However, the calculations of the white command for the success of the quick assault were not justified. The Red Army was already quite different. After defeats, the Red Army, as before, did not break down, did not scatter at the first shots. Now the Reds retreated in an organized manner, regrouped, replenished units, brought weapon, ammunition and prepared for new battles. For violations of discipline and order, chieftaincy and partisanism were severely punished. In addition, the Soviet troops were protected by strong fortifications. The Kakhovsky fortified area had three lines of defense: 1) a forward line of 40 km, which consisted of separate trenches and platoon strongpoints reinforced with barbed wire; 2) the main line, 30 km away, was 3-6 km from the front line. It consisted of 2-3 lines of trenches with communication trenches, observation posts, company strongpoints, artillery positions, and infantry shelters. Antipersonnel and anti-tank mines (for the first time in the practice of the Red Army) were installed in the main directions; 3) the bridgehead line of defense, 2 km away, protected the crossings. The Kakhovsky fortified area had strong artillery, including anti-aircraft.

Vitkovsky's troops dealt the main blow along the Perekop-Kakhovka road. Soviet artillery met the White Guards with deadly fire. Multi-row barbed wire obstacles had to be cut with bayonets. There were no scissors for cutting: the French promised, but did not send. The Wrangelites could not break through the barriers even with strong artillery fire. The whites were experiencing a severe lack of ammunition. The shells had to be saved, especially for the British guns (there were no supplies). Attempts to break through the defenses of the Red Army with the help of tanks also did not lead to success. The Red Army men learned to beat enemy tanks, rolling out light guns for direct fire. Two white tanks were hit, two, having broken through the first line of obstacles, got stuck on the second and were captured during a counterattack by the Red Army. The assault lasted 5 days and nights. White's night attacks did not help. The red artillery shot the area well and hit the squares. By September 6, the attacks of the White Guards fizzled out. Having lost up to half of the personnel and 6 tanks, Vitkovsky's group went on the defensive (until September 14, when Wrangel's army went on the last offensive).

Thus, the next operation of the Red Army in the Crimean direction did not lead to the defeat and destruction of Wrangel's army. However, Soviet troops distracted the enemy from the Kuban, where the Ulagaya group was operating. They also defended the strategic Kakhovsky bridgehead, which hung over the enemy and was only 2,5 transitions from Perekop. He tied the forces of the whites, did not allow them to develop an offensive to the east or northeast. In addition, the Reds had complete superiority in human and material resources. The White Guards fought to the limit of their capabilities - human and material. All reorganizations and regroupings were carried out without withdrawing the best units from the front line. The elite divisions of Kutepov's 1st corps (Kornilovskaya, Drozdovskaya, Markovskaya) constantly rushed from one threatened area to another and had practically no rest. In this case, the White Army could have been destroyed by one battle. For the Red Army, temporary setbacks were not decisive. The Reds quickly replenished divisions, constantly building up forces and assets on the Southern Front. At the end of September, the 1st Cavalry of Budyonny was sent against Wrangel's army. 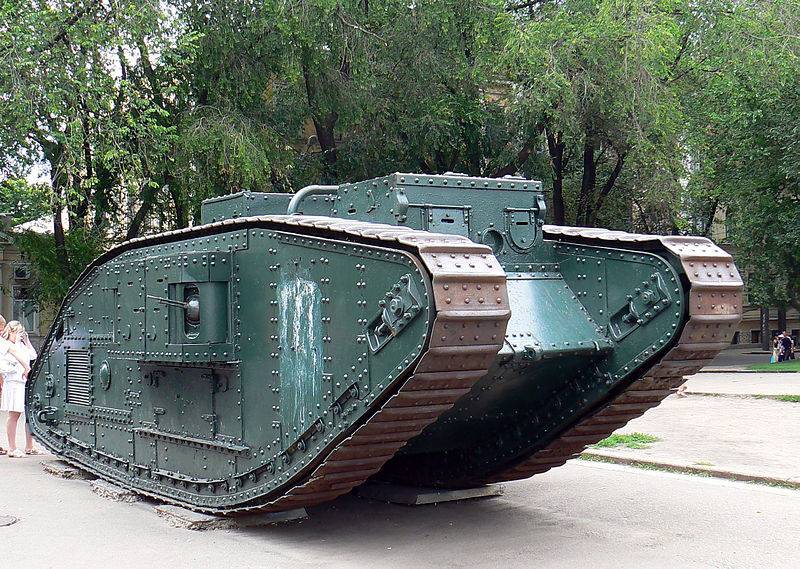 British tank Mark V release 1919 or early 1920, captured by the Red Army from the whites on the Kakhovsky bridgehead in 1920

Battle of Rostov
The disaster of white Odessa
How Slashchev Crimea defended
Dono-Manych battle
The death of the Northern Army Miller
Why Western agent Kolchak is turned into a hero and martyr of Russia
The defeat of the army of Denikin in the battle of Tikhorets
How did the Ice Siberian campaign end
The fall of the White Kuban
Agony of White Novorossiysk
The death of the Kuban army
Denikin's resignation
Far Eastern Republic and the Japanese threat
Polish "liberation" campaign in Kiev
Baku “Blitzkrieg” of the Red Army
The battle for Belarus. May operation of the Red Army
War of the Russian Army Wrangel
The first victories of the Wrangel army
The defeat of the 13th Soviet Army in Northern Tavria
Our Kiev!
The battle for Rivne. How Budyonnovtsy smashed the Polish defense
Minsk is ours! The defeat of the Polish army in Belarus
Battle for Lviv. The failure of the Red Army in Galicia
The death of the cavalry group Rednecks
The fierce battle for the Kakhovsky bridgehead
The defeat of the landing group Ulagaya
"Miracle on the Vistula"
How Tukhachevsky destroyed his armies on the Vistula
Battle of Komarov. Defeat of the 1st Cavalry Army
Bukhara Blitzkrieg Frunze
"The danger of Wrangel is becoming enormous ..."