Baku “Blitzkrieg” of the Red Army 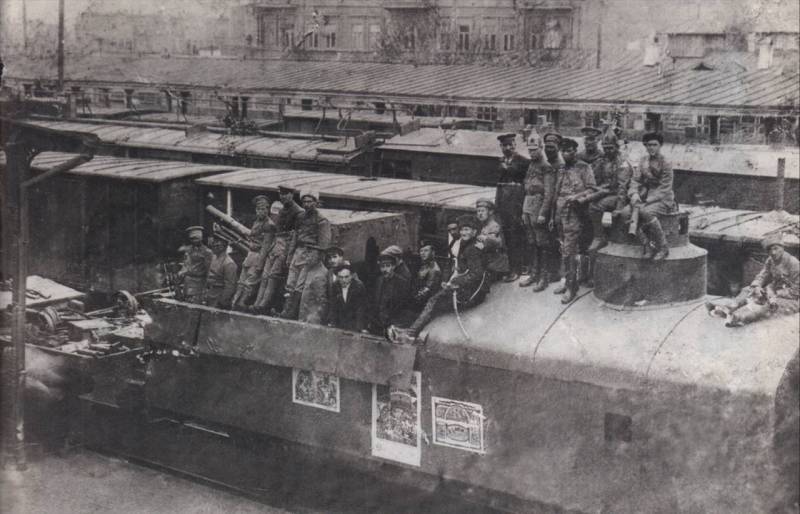 Smoot. 1920 year. 100 years ago, at the end of April 1920, the Baku operation was carried out. The Red Army established Soviet power in Azerbaijan. The region was returned to Russian control. On April 28, the Azerbaijan Soviet Socialist Republic was proclaimed.

The general situation in Azerbaijan

After the overthrow of Soviet power in Baku in 1918, the city became the capital of the Azerbaijan Democratic Republic (ADR), one of the "independent states" created during the "sovereignty parade" 1917-1918. ADR was divided into the Baku, Ganja, Zagatala provinces and the Karabakh governor general. In 1918, part of the territory of the republic was occupied by Turkish troops, in 1919 - British. Politically, the Muslim party Musavat (Equality) dominated the ADR. Therefore, in Soviet historiography, the political regime that existed in the ADR was usually called "Musavat".

All my short history ADR waged an unofficial war with Armenia. ADR and Armenia could not divide the disputed territories, where the population was mixed. The main hostilities were carried out by Armenian and Muslim-Azerbaijani militias, which were supported by states. Azerbaijan opposed the Armenian forces in Karabakh and Zangezur. The war was accompanied by ethnic cleansing, acts of genocide, forced displacement and mass exodus of the population.

The republic during the general Russian unrest experienced a deep political and socio-economic crisis. At first, the Musavatists tried to cling to the Ottoman Empire, but soon Turkey itself collapsed into turmoil, there was a civil war. The Turks were not up to the ADR. Moreover, Mustafa Kemal, who was fighting for a new Turkey and interested in financial and material support for Soviet Russia, supported the Bolsheviks. On April 26, 1920, Kemal announced that he was ready, together with the Soviet government, to fight against imperialist governments to free all the oppressed. Kemal pledged to influence Azerbaijan so that the republic became part of the circle of Soviet states, and asked Moscow for help to fight the imperialists (gold, weapon and ammunition).

Trying to rely on Britain also did not lead to success. The British brought troops into the republic, but after a general failure of the intervention in Russia, they were withdrawn from Azerbaijan. And without external support, Baku’s “independence” was a fiction. In addition, the Musavatist regime was digging a grave for itself with the war against the Armenians and the cold-hostile policy towards the white South of Russia. As soon as the shield of Denikin’s army collapsed, all the Transcaucasian “sovereign states” quickly collapsed.

Moscow offered Baku an alliance against Denikin, but the Musavatists categorically refused. In March 1920, in connection with the upcoming war with Poland, the Soviet government again tried to come to an agreement with Baku and restore oil supplies. Did not work out. Then they made a bet on a power operation. The situation was favorable, Kemal, a leading force in Turkey, supported Moscow.

The economy, the degradation of which began during the World War II, was in ruin. The rupture of economic ties with Russia and the general turmoil put the republic in a catastrophic state. Collapsed the main industry - the oil industry. Compared to 1913, oil production at the beginning of 1920 was 39%, refining - 34%. 18 out of 40 oil refineries worked. The industry has lost hundreds of millions of rubles in gold. The wages of Baku oil workers in October 1920 fell to 18% from the 1914 level. At the same time, hungry workers instead of 8 hours a day worked for 15-17 hours.

The second leading branch of the economy, agriculture, was also dying. Compared with the pre-war level, the area of ​​crops in 1920 decreased by 40%, under the vineyards - by a third, animal husbandry collapsed by 60-70%. Cotton crops almost disappeared. The irrigation system has declined. The country was seized by the food crisis. It was strengthened by the policies of the white government of southern Russia. Denikin imposed an economic blockade on Georgia and Azerbaijan, as he did not want to support local nationalists.

Thus, the socio-economic situation was catastrophic. The collapse of the national economy. Mass unemployment. A sharp drop in income, especially among low-income groups. An incredible increase in prices for food and essential goods. A sharp increase in social tension. All this was complicated by the war with Armenia, the huge flows of refugees that brought hunger and epidemics. In the counties there was a peasant war. The peasants seized landowner possessions, the feudal lords, with the support of the authorities, responded with terror. As a result, the ideas of the Bolsheviks were popular in the countryside. In addition, in conditions of weak power and turmoil, a mass of armed detachments and gangs operated. In fact, gangs were the power in many counties. The gangs included deserters, runaway criminals and local robbers, ruined feudal lords and peasants, refugees with no sources of livelihood, and representatives of nomadic tribes.

The Musavatist regime was in deep crisis. The Baku authorities could not solve the military-political crisis (war with Armenia), workers and peasants (land) issues, establish relations with Russia (white or red), restore the economy and restore order in the country. Parliament was busy with endless talking, discussions and disputes. The parties fought an endless war with each other, could not agree on any major issue. The authorities were overwhelmed by corruption, abuse, speculation and personal enrichment.

The army without military material support of Turkey quickly lost its combat effectiveness. The poor went to the soldiers, fleeing from hunger. They did not want to fight and deserted as soon as possible. The army almost collapsed due to mass desertion. Many parts of de facto existed only on paper or had only a small part of the staff. Disobedience and riots were commonplace. As a result, the April Revolution of 30 thousand. the ADR army was completely decomposed and could not provide any serious resistance. In addition, its main forces were concentrated in the Karabakh and Zangezur region, where they fought with the Armenians. 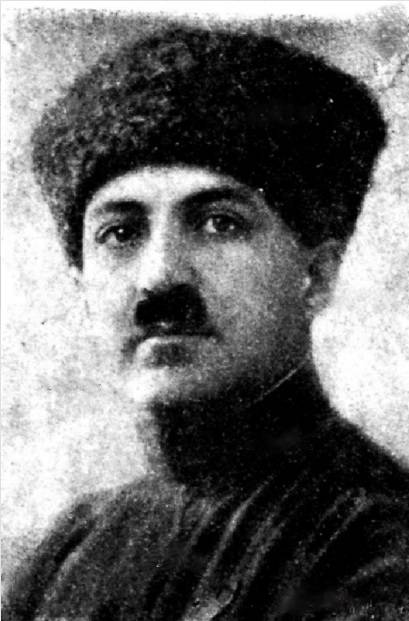 One of the leaders of the uprising in Baku, Chingiz Ildrym

The underground in Azerbaijan were the Social Democratic parties and organizations that were in the Bolshevik position. Initially, they were weak, many activists were killed or thrown into prison during the terror. However, as the situation develops and problems in the country grow, their positions have strengthened. Azerbaijani Bolsheviks and supporters of the establishment of Soviet power in the country were supported by the Left Social Revolutionaries. In the spring of 1919, the Bolsheviks defeated their opponents (Mensheviks and Socialist Revolutionaries) in workers' organizations. The leadership of the Baku working conference actually passed into the hands of the Bolsheviks. The Bolsheviks conducted active propaganda, published a large number of newspapers.

Gradually revolutionary sentiment penetrated the power structures and the army. So, metallurgical engineer Chingiz Ildrym, with the help of the parliamentary deputy socialist A. Karaev, became a member of the council under the Governor-General of Karabakh, and then chief assistant to the head of the Baku port and deputy chief of the military port. The revolutionaries actively acted in the garrison of Baku, on navy and even in counterintelligence.

Since October 1919, the Baku Party Conference headed for the preparation of an armed uprising. Money and weapons were brought from Baku to the North Caucasus and Astrakhan. On February 11-12, 1920, a congress of ADR communist organizations was held in Baku, which proclaimed the creation of the Azerbaijan Communist Party (Bolsheviks) - AKP (b). The congress aimed to prepare the workers and peasants for the overthrow of the existing regime.

The authorities responded with terror, trying to strengthen their power resources, but without much success. The government was in crisis and could not offer. The Baku government, learning about the preparations for the uprising and the Red Army in Dagestan, requested military assistance from the British and Georgia. They also asked to put pressure on Armenia to stop the hostilities in Karabakh and from there to transfer troops to the border with Dagestan, but without success.

In March 1920, preparations for the uprising intensified; issues of interaction between the rebels in the 11th Soviet Army, which operated in the North Caucasus in the Caspian Sea region, were considered. On April 24, the AKP (b) Baku Committee announced full combat readiness. An illegal issue of the AKP (b) body, the newspaper Novy Mir, was published, proclaiming: “Down with the Beksk-Khan government of Musavat!”, “Long live the Soviet government!”, “Long live the Soviet independent red Azerbaijan!” On April 26, the operational headquarters of the uprising was formed. On the night of April 26-27, the Bolsheviks revolted in Baku. The government was given an ultimatum on the transfer of power. The authorities discussed the issue of evacuation to Ganja to organize resistance there. However, the military declared the impossibility of armed struggle. The parliament convened at an emergency meeting transferred the power of the AKP (b) by a majority of votes, after which it dissolved.

The Interim Revolutionary Committee of Azerbaijan turned to Moscow with a proposal to create a fraternal union to fight the imperialists and asked for military assistance by sending troops of the Red Army. Already on April 28, the Azerbaijan Soviet Socialist Republic (ASSR) was proclaimed. 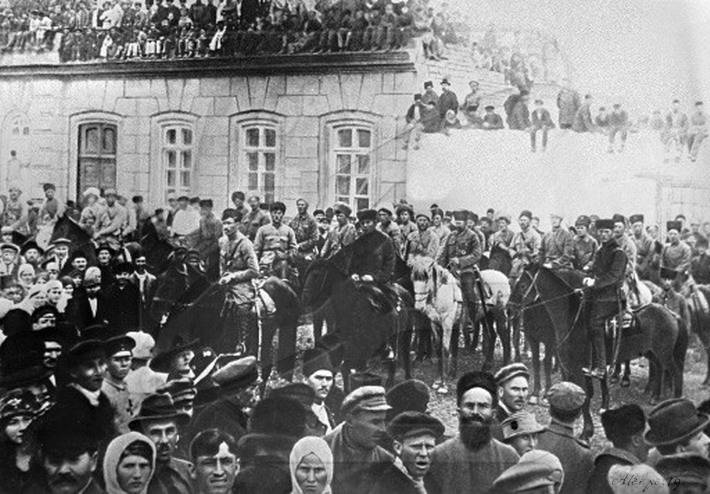 The entry of the Red Army in Baku 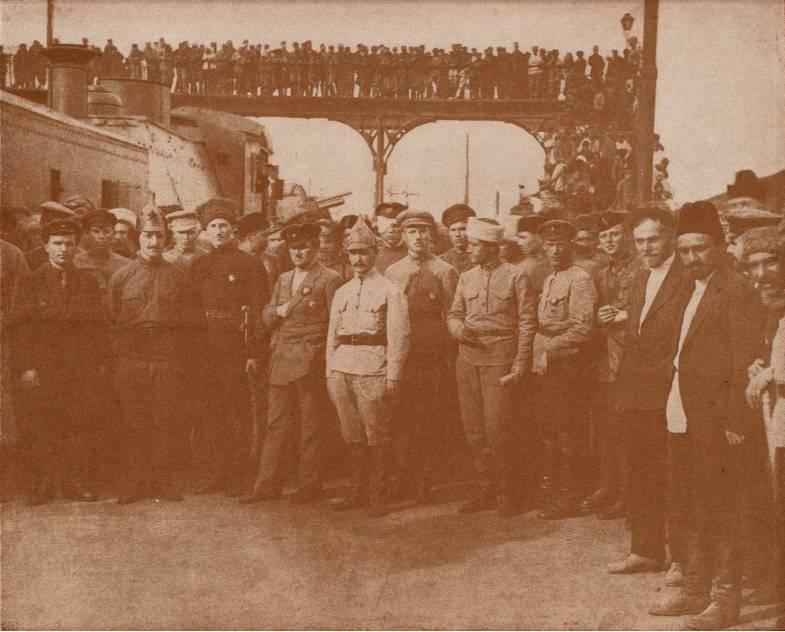 Kirov, Mikoyan, Ordzhonikidze and Lewandowski among the Red Army soldiers and commanders of the 11th army at the railway station in Baku, May 1920.

Blitzkrieg of the 11th Soviet Army

Along with the uprising in Baku, units of the 11th army led by Mikhail Lewandowski (a former officer of the tsarist army) crossed the border of the republic. The operation was directly led by Kirov and Ordzhonikidze. Parts of the 11th Army were concentrated in the area of ​​Derbent. On the night of the uprising, a group of four armored trains with a landing party rushed to Azerbaijan. Before the Samura River, the stations of Yalama, Khudat stops were made. The soldiers destroyed telephone and telegraph wires. The barriers of the Azerbaijani army were easily shot down. No one showed strong resistance. As a result, armored trains rushed undetected and broke into Baku in the early morning of April 28. Following them were trains with infantry. On April 30, the main forces of the 11th Army entered Baku. Soon the Caspian flotilla arrived in Baku.

As a result of the one-day “blitzkrieg” of the 11th Army, Azerbaijan became Soviet. In general, the Baku operation was painless and almost bloodless. Only in some places of Baku did minor skirmishes occur. The Red Army has solved the problem of restoring Soviet power in the Baku province. It is worth noting that this event did not cause stubborn resistance and mass anti-Soviet movement in Baku and the region. In general, Azerbaijan and its people only benefited (in all respects: socio-economic, cultural, demographic) from returning to Russia. 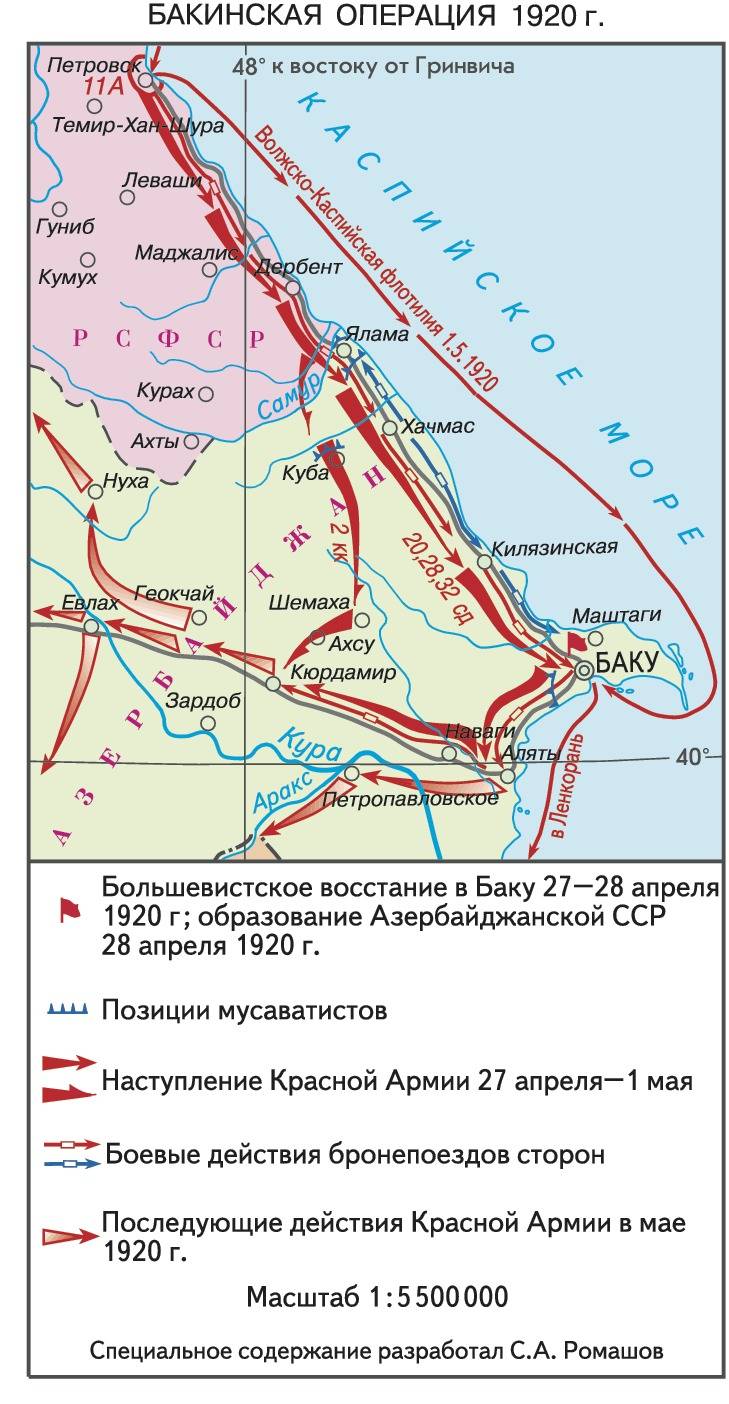 Ctrl Enter
Noticed a mistake Highlight text and press. Ctrl + Enter
We are
Red Persia. Part of 3. How South Azerbaijan almost went to the USSRRussian armored train
77 comments
Information
Dear reader, to leave comments on the publication, you must to register.