The last offensive of the Russian army 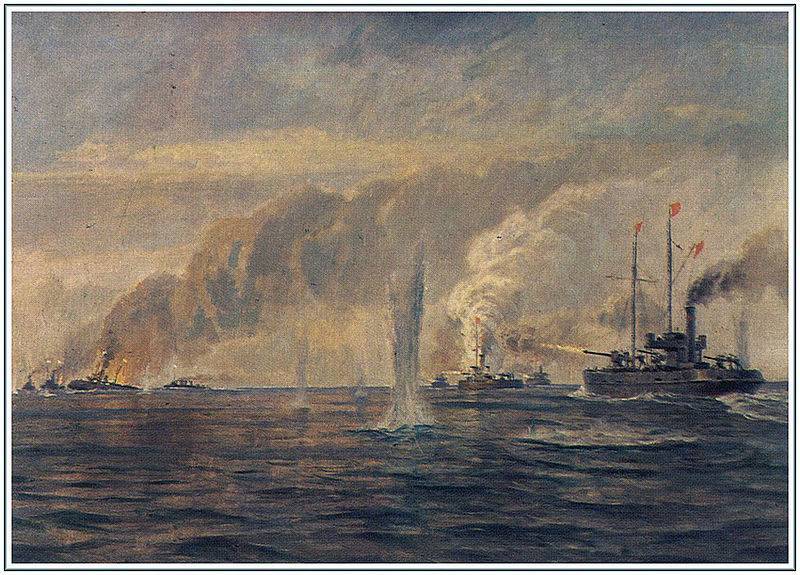 G.F. Gorshkov. "Battle of the ships of the Azov military flotilla with Wrangel's ships at the Obitochnaya Spit "

100 years ago, in September 1920, the last offensive of Wrangel's Russian army began. The White Guards again defeated the 13th Soviet Army, captured Berdyansk, Mariupol and Aleksandrovsk and found themselves on the outskirts of Yuzovka and Taganrog.

Attempts to strengthen the rear

After the unsuccessful assault on the Kakhovsky fortified area in early September 1920, a temporary lull set in on the entire Tauride Front. Both sides replenished losses, regrouped forces, pulled up reserves. We were preparing for new battles. This time the White command was preparing an operation on the northeastern flank, was going to strike in the Yekaterinoslav direction, break into the Donetsk basin and into the Don region. First, the Wrangelites had to defeat the Reds in the Pologi - Verkhniy Tokmak area, strike at the flank and rear of the enemy in the Orekhov - Aleksandrovsk area. After defeating the enemy on the left bank of the Dnieper, Wrangel was going to return to the Zadneprovskoy operation. Defeat the Red Army on the western flank, creating the possibility of a deep breakthrough in Ukraine and joining with the Petliura and Poles. Right-bank Ukraine was supposed to give the whites allies, reinforcements and resources for the war.

In the hope of creating a powerful new anti-Soviet front, the commander-in-chief of the Russian army continued to seek contacts with various forces. It was not possible to raise an uprising in the Don and Kuban. Representatives of the rebels from Ukraine came to Wrangel, they were provided material assistance. The real significance of such "alliances" was negligible. Atamanov and Batek were interested in money, weapon, supply. But in return they could not give anything, and they did not want to. They “walked by themselves” and did only what was beneficial to them. The white command tried to come to an agreement with Makhno, who had the most united and combat-ready forces. However, the Makhnovists did not make contact. The "generals" were "counter-revolutionaries" for the old man. The Makhnovists were fundamentally opposed to any government, but they were on the same side of the front with the Bolsheviks.

The lack of an alliance with Makhno worsened the situation in the rear of the White Army. The white rear was disturbed by the Crimean "green" and red partisans. There were quite a few of them, often deserters of various armies. They disrupted communications, robbed passers-by, and raided populated areas. This forced the whites to keep garrisons in the rear cities, to equip punitive expeditions from the rear units and cadets against the rebels and partisans. To fight the gangs in the rear, a special headquarters was created, headed by General Anatoly Nosovich. Many "green" ideologically considered themselves Makhnovists, recognizing the supreme authority of the father. The insurgent peasants of Tavria also considered themselves "Makhnovists". Since dad did not support Wrangel, they did not support the whites either. The peasants did not go to the Russian army, they hid from mobilization, went to the partisans. Large settlements in Tavria did not give a single conscript to the army. Wrangel's "draconian" orders (on mutual responsibility in the family and in the countryside, confiscation of property from deserters, etc.) were simply ignored.

The workers were on the side of the socialists. Crimean Tatars preferred the "green" ones. The masses of refugees who flooded the cities of Crimea preferred "politics", revelry in taverns or flight abroad. They did not want to go to the front line. As a result, the White Army was dying from a lack of reinforcements. Something was given to mobilization in the cities, prisoners of the Red Army were herded into the troops, reorganization and disbandment of rear offices and units was underway. But these reinforcements were much worse in quality than the front-line units. It was especially difficult to compensate for the losses in the officer corps. The white command could not bring to the rear to rest and replenish the unit from the front line. There was no one to replace them. The same units (Kornilovites, Markovites, Drozdovites, etc.) were thrown into threatened sectors of the front, into a breakthrough.

Reorganization of the Russian army

In September 1920, the position of the whites temporarily changed for the better. On the Polish front, the Red Army suffered a heavy defeat. Wrangel proposed to the Polish government in the central direction to stop at the old German positions and in the future to carry out the main operations in the Kiev direction. Wrangel himself planned to break through the Dnieper, to unite with the Poles in the Kiev region. Then one could think of a trip to Moscow. Savinkov in Poland began to create the 3rd Russian army. The Ukrainian National Committee was established under the Crimean government. The moderate Ukrainian nationalists who were in it fought for an autonomous Ukraine within the framework of a united Russia.

Wrangel's army received reinforcements. The Ulagai landing corps returned from the Kuban, with it thousands of Kuban Cossacks arrived, who joined the Wrangelites. Fostikov's "army" was taken out of Georgia. Their Poland was transferred 15 thousand. Bredov's building. Additional mobilization was carried out. With the help of foreign missions and émigré organizations, White Guards arrived in Crimea, singly and in groups, who for various reasons ended up in the Baltic States, Germany, Poland, Romania, even from China. A significant increase in the number gave the attraction of Red Army prisoners to the army.

This allowed Wrangel to reorganize the army. The troops were divided into two armies. The 1st Army and the Don Corps were brought together to the 1st Army under the command of Kutepov. The 2nd Army Corps of Vitkovsky and the 3rd Army, formed from the Consolidated Kuban Infantry Division (7th Division), Kuban and Bredovites, entered the 2nd Army under the command of Dratsenko. 1st Army was located on the right wing of the Tavrian Front, 2nd - on the left. General Barbovich's separate cavalry corps united the regular cavalry. A separate equestrian group included the Kuban division and the Terek-Astrakhan brigade. The combat strength of the White Army grew to 44 thousand people with about 200 guns, about 1 thousand machine guns, 34 aircraft, 26 armored cars, 9 tanks and 19 armored trains. In the rear, at the stage of formation, there were other units, but they had low combat effectiveness, it was also necessary to obtain weapons and uniforms from the Entente.

Before a breakthrough on the western flank, it was necessary to protect oneself in the north and east, where the 13th Soviet army threatened the whites. It was necessary to defeat the 13th Army or push it away. Also, the offensive of the 1st army of Kutepov on the right flank was supposed to divert the attention and reserves of the enemy. 2nd Army Dratsenko with Babiev's cavalry got time to prepare the Zadneprovskoy operation. By mid-September 1920, in the Mikhailovka-Vasilyevka area, the White command concentrated the 1st Army Corps, the Kornilov Division, the 1st, 2nd and 4th Kuban Cavalry Divisions and the Don Corps.

On September 14, 1920, Abramov's Don Corps launched an offensive. On September 15, a naval battle took place near the Obitochnaya spit (near Berdyansk). The Red Azov military flotilla led by Khvitsky (4 gunboats and 3 boats) left Melitopol with the task of attacking the white flotilla under the command of the captain of the 2nd rank Karpov (2 gunboats, two armed icebreakers, a destroyer, a minesweeper and a boat), which fired at Berdyansk. The forces of the parties were approximately equal. During the skirmish, the White Flotilla lost the Salgir gunboat, and the Ural gunboat was also damaged. Both sides declared themselves the winners. In general, the Reds gained an advantage in the Sea of ​​Azov and deprived the White Army, which was attacking the Donbass, of support from the sea.

In stubborn battles, the Don divisions battered and pressed the 40th and 42nd rifle divisions of the Reds. The enemy was thrown back to the east and northeast, on the river. Horse. Then the Wrangelites captured Berdyansk and the Pologi station. Developing the offensive, the whites moved to the Donbass. The 1st Army Corps also went on the offensive, breaking through the red front at Novo-Grigorievsky. Defeating the right wing of the 13th Army, the White Guards took Orekhov, on September 19 - Aleksandrovsk. The Red Army retreated to the island of Khortitsa opposite the city. Kutepov's troops continued to march north. The Whites took Slavgorod, in the area of ​​which stubborn battles were fought in the following days. On September 22, the 1st Russian Army occupied the Sinelnikovo station.

The White command transferred the Don Corps and Kuban divisions to the eastern flank in order to develop an offensive on Yuzovka and Mariupol. White on September 28 occupied Mariupol. The Don corps went to the border of the Don region. On this, the successes of the White Army on the right flank ended. The 13th Soviet Army, receiving reinforcements and introducing reserves into battle, counterattacked. In the area of ​​Sinelnikovo, there were fierce oncoming battles. The 1st corps went over to the defensive. The Don group of whites was first stopped and then thrown back. At the same time, the attention of the white command riveted the left flank, where a new offensive operation was conceived. Therefore, the Wrangelites were unable to develop the first successes in the northeast. 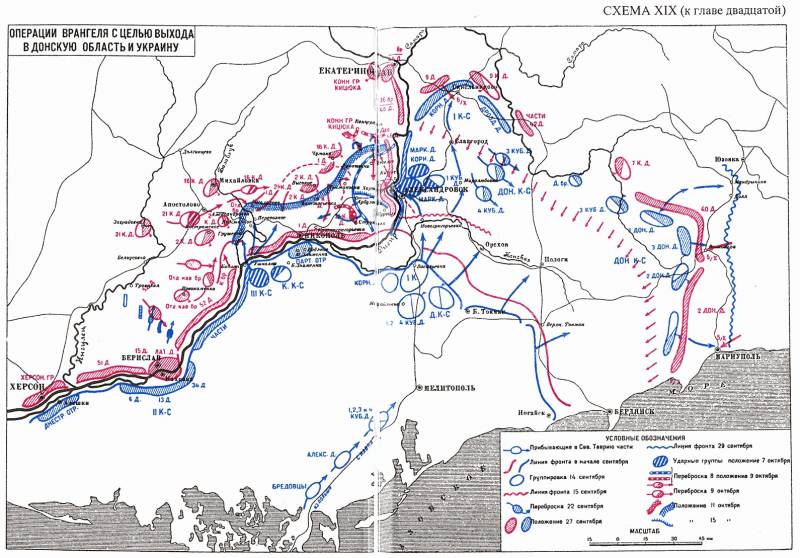 Battle of Rostov
The disaster of white Odessa
How Slashchev Crimea defended
Dono-Manych battle
The death of the Northern Army Miller
Why Western agent Kolchak is turned into a hero and martyr of Russia
The defeat of the army of Denikin in the battle of Tikhorets
How did the Ice Siberian campaign end
The fall of the White Kuban
Agony of White Novorossiysk
The death of the Kuban army
Denikin's resignation
Far Eastern Republic and the Japanese threat
Polish "liberation" campaign in Kiev
Baku “Blitzkrieg” of the Red Army
The battle for Belarus. May operation of the Red Army
War of the Russian Army Wrangel
The first victories of the Wrangel army
The defeat of the 13th Soviet Army in Northern Tavria
Our Kiev!
The battle for Rivne. How Budyonnovtsy smashed the Polish defense
Minsk is ours! The defeat of the Polish army in Belarus
Battle for Lviv. The failure of the Red Army in Galicia
The death of the cavalry group Rednecks
The fierce battle for the Kakhovsky bridgehead
The defeat of the landing group Ulagaya
"Miracle on the Vistula"
How Tukhachevsky destroyed his armies on the Vistula
Battle of Komarov. Defeat of the 1st Cavalry Army
Bukhara Blitzkrieg Frunze
"The danger of Wrangel is becoming enormous ..."
Battle on the Lower Dnieper