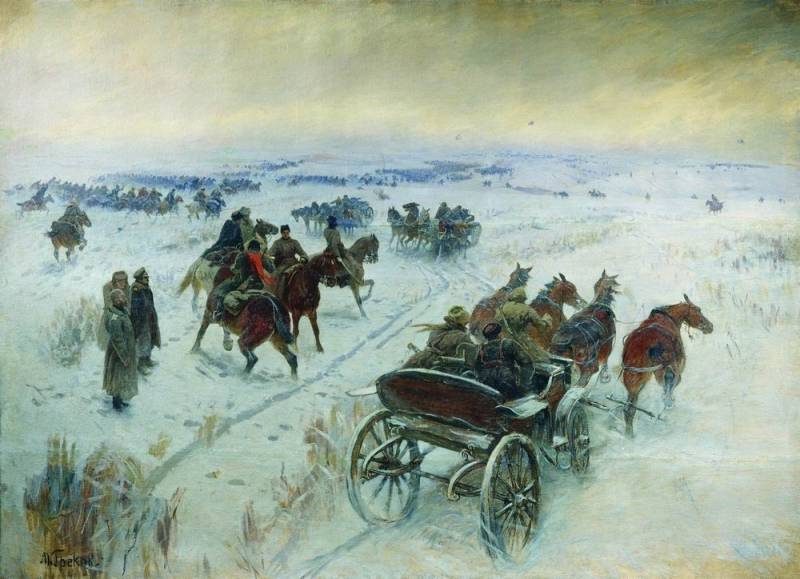 In January - early February 1920, the Red Army tried to “finish off” Denikin’s army in the Caucasus. However, she met fierce resistance and was thrown back. The first attempt to liberate the Caucasus failed.

General situation at the front

After the fall of Rostov and Novocherkassk, Denikin’s army retreated behind Don and Sal. The White Guards were able to repel the first attempts of the Red Army to break through behind the Don. The Reds were weary of previous offensives, bled of fighting, a strong epidemic of typhoid and desertion.

In early January 1920, the front ran along the Don to the village of Verkhne-Kurmoyarovskaya and from there, crossing the Tsaritsyn-Tikhoretskaya railway line, went along Sal to the Kalmyk steppes. The main forces of Denikin were located in the Rostov direction and in the center: the Separate Volunteer Corps of Kutepov and the Don Army of Sidorin. Behind Sal was the Caucasian army of Pokrovsky. Volunteers held the defense on the Azov-Bataisk section, where they expected a strike by the main enemy forces. Bataisk turned into a strong point. To the south of Bataisk there was a reserve - the Kuban corps. Don corps was located from the village of Olginskaya and further. White forces totaled about 60 thousand people with 450 guns and over 1180 machine guns.

On January 16, 1920, the Red Southeastern Front was transformed into the Caucasian Front under the command of Vasily Shorin (on January 24, it was temporarily replaced by Chief of Staff Fyodor Afanasyev, then the front was headed by Mikhail Tukhachevsky). The Caucasian front was tasked with smashing the North Caucasian White Army group and liberating the Caucasus. The front initially included: the 8th, 9th, 10th, 11th and 1st Cavalry armies. On the Rostov axis were the 8th and 1st Cavalry armies, in the center - the 9th army, on the left flank - the 10th and 11th armies. The troops of the front totaled more than 70 thousand bayonets and sabers, about 600 guns and more than 2700 machine guns. That is, the Reds did not have decisive superiority in forces in the Caucasian direction. In addition, the Reds were weary and bloodless of the previous offensive, their communications were stretched, the railways were destroyed during the fighting. Therefore, the Red Army could not quickly restore, replenish the thinned units, send reinforcements, establish supplies weapons, ammunition and food.

Plans of the Soviet command

The area beyond the Don was a plain with a large number of lakes, bolts, streams and rivers, which strengthened the position of the defending White Guards and interfered with the maneuverable actions of the Reds. Also, the Reds underestimated the enemy, believed that it would be easy to “finish off” the previously defeated Denikins.

The Soviet command decided to force Don and Manych on the move, not wait for spring, not allowing the enemy to gain a foothold in these positions and restore strength. To occupy the Yeisk-Grand Duke line, to develop an offensive on Tikhoretskaya. The 1st Horse Army of Budenny received the task of defeating the volunteers, reaching the border of Yeisk, Kushchevskaya. The 8th army of Sokolnikov struck in the area of ​​Bataysk and Olginskaya, had to defeat the 3rd Don corps and go to the line Kushchevskaya, Mechetinskaya; Stepin’s 9th Army to defeat parts of the 2nd and 1st Don Corps, go to the Mechetinskaya, Velikoknyazheskaya line, then send the Dumenko horse corps to Tikhoretskaya; Pavlov’s 10th Army - defeat the 1st Kuban Corps and attack the Grand Duke. The 11th Army of Vasilenko attacked Torgovaya with their right flank. Other parts of the 11th Army attacked Divnoye, the Holy Cross, and Kizlyar, confronting the North Caucasus troops of General Erdeli. Thus, the main blow was delivered in a “joint” between volunteers who stood in the lower reaches of the Don and the Don. It was also the shortest direction to Ekaterinodar.

On January 17–18, 1920, units of the 1st Cavalry and the 8th Army tried to force the Don, but were not successful due to the early thaw and lack of crossing facilities. On January 19, the Reds were able to force the river and occupy Olginskaya, and the troops of the 8th Army - Sulin and Darievskaya. On January 20, the Reds attacked Bataysk, occupied by volunteers, but got stuck in a swampy area. The red cavalry could not turn around, and the volunteers successfully repelled the attacks on the forehead.

In the meantime, the white command, in order to eliminate the enemy’s breakthrough, transferred its reserve corps of General Toporkov to the Bataysk region (the remains of the 3rd corps of Shkuro, Barbovich’s cavalry brigade). The 4th Don Corps was also transferred to the battle area, which, after the death of Mamontov, was led by General Pavlov. The white cavalry stealthily concentrated and dealt a sudden blow to the enemy. Volunteers also counterattacked. The Budenovites, who did not expect a strong blow, were overturned. Parts of the 1st Cavalry and 8th armies were forced to abandon the already occupied bridgehead, to retreat beyond the Don. A day later, the Red Army again tried to advance, captured Olginsky, but after a counterattack of the white cavalry, again retreated behind the Don.

Soviet troops suffered significant casualties and lost over 20 guns. The divisions of the 8th Army (15th, 16th, 31st and 33rd) were badly battered. White morale, on the contrary, has risen. The failure of the 1st Cavalry and the 8th armies led to a conflict between the commander of Budyonny and the Commander Shorin. Budyonny shouted that his troops were thrown head-on into the well-fortified positions of the enemy, for which the cavalry was not intended. The terrain was unsuitable for the deployment of cavalry. The Front believed that the main reason for the failure was an unjustified pause in hostilities, when the troops, taking Novocherkassk and Rostov, walked and drank, which was also condoned by the commanders. Shorin noted that the Budyonnovtsy drowned their military glory in the wine cellars of Rostov. In addition, the command of the 1st Cavalry Army did not use all its forces. As a result, the front command was changed. Shorin was sent to Siberia, and from there they called the “winner of Kolchak” Tukhachevsky, who led the Caucasus Front. Prior to his arrival, Afanasyev was the front commander. 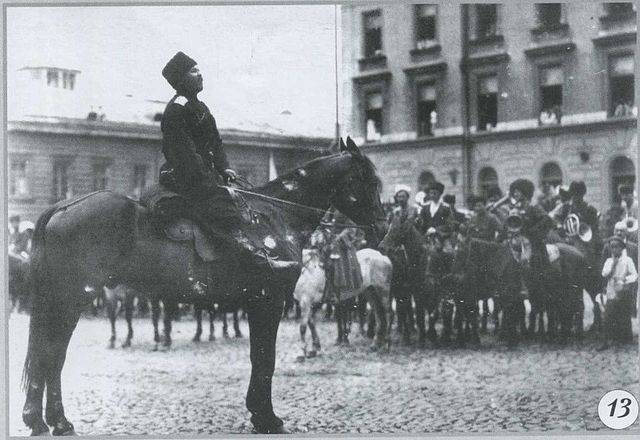 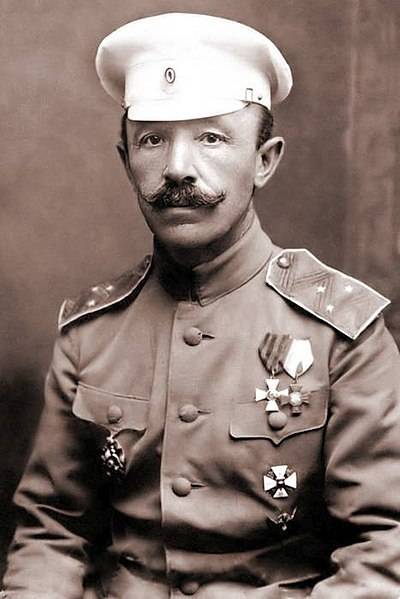 Commander of the cavalry brigade, combined cavalry division, General I. G. Barbovich
However, on the eastern flank of the Caucasian Front, the Reds were successful. The 9th and 10th armies crossed Don and Sal across the ice and reached the border of Starocherkasskaya, Bagaevskaya, Kholodny, Kargalskaya and Remontnoe. The Reds squeezed the 1st and 2nd Don corps, a weak Caucasian army. The Donets were thrown back for Manych, the 21st Infantry Division forced the river and captured Manych. There was a threat to the flank and rear of the main group of the Denikin army.

The Soviet command decided to transfer the main strike to the strip of the 9th army, to transfer the army of Budenny there and attack together with the horse corps of Dumenko. The 9th and 10th armies were to develop the offensive in the same direction. Having regrouped forces, on January 27-28, the troops of the Caucasian Front again went on the offensive. Budyonny’s army entered the Manych region. Dumenko's cavalry, together with the 23rd Infantry Division, struck from the Sporny area on Vesely, forced Manych and defeated the Don Infantry of the 2nd Corps. There was a threat of a breakthrough of the red cavalry in the rear of Denikin's army.

However, the white command was able to avoid disaster. In the region of Efremov, an urgent fist was formed from the 4th Don Corps, parts of the 1st and 2nd Don Corps. Toporkov’s corps was urgently put forward to the breakthrough area. Donets from three directions attacked the Dumenko corps and the 23rd division. The Reds retreated behind Manych. Then the whites hit Budyonnovtsy, who also retreated to Manych. As a result, the advance of the strike group of the Caucasian Front was frustrated. Volunteers also repelled new attempts by the Reds to advance in the Bataysk area. The fighting continued for several more days. January 31 - February 2, the Reds again tried to force Manych, but were discarded. On February 6, the offensive was stopped, the troops went on the defensive.

This failure caused a new controversy in the Soviet command. Shorin believed that the 1st Cavalry Army, after the first successful strike, was delayed for half a day without starting the pursuit of the enemy. And White managed to regroup. Voroshilov, a member of the Revolutionary Military Council of the 1st Cavalry Army, had a different point of view: the fact was that the two horse groups (Budenny’s army and Dumenko’s corps) attacked separately, were not united under one command. As a result, Dumenko’s corps rushed forward, Budenny’s troops were only preparing to force Manych. This allowed White to defeat Dumenko and Budyonny separately.

Thus, the Red Army was able to fulfill only part of the task: the territory north of the Manych River was occupied, a bridgehead was created for the development of the North Caucasus strategic operation. The main goal was not achieved: the North Caucasian group of the White Army repelled the attack on Tikhoretskaya - Yekaterinodar, successfully counterattacked.

The main reasons for the failure of the Caucasian Front: the Reds did not have decisive superiority in power; attacked in divided directions, could not concentrate efforts on the main direction; poorly used the main striking force of the front - the Budyonny army, which was stuck in the marshy floodplain of the Don; Soviet armies were weary and bled of previous battles, had a significant shortage of manpower; cavalry and rifle divisions interacted poorly; the enemy was underestimated, the white command skillfully organized the actions of its cavalry, inflicted strong counterattacks. 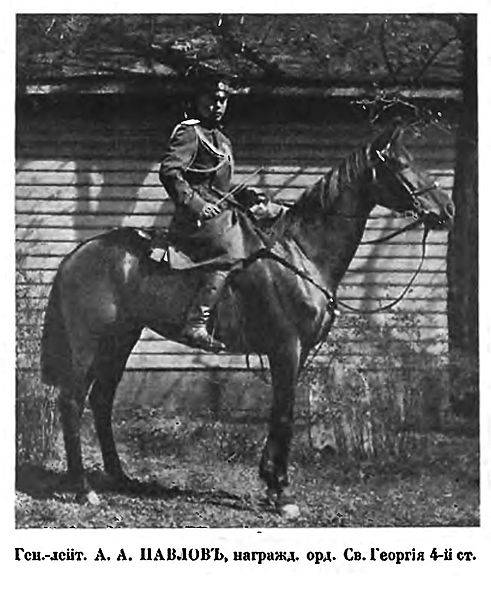 The commander of the 4th Don Corps and shock mounted group of the Don Army, General A. A. Pavlov

We are in Yandex Zen
How to release the "Gate of the Caucasus." February 14 - Rostov-on-Don Liberation Day
Cossacks in the Civil War. Part III. 1919 year. Russian Vendée
35 comments
Information
Dear reader, to leave comments on the publication, you must to register.