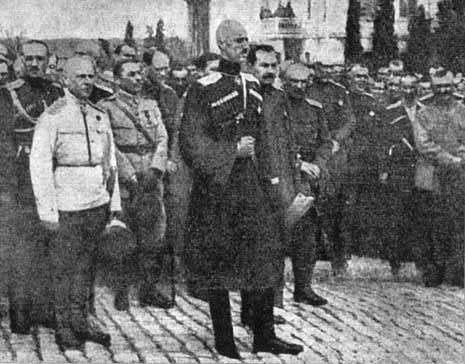 After the loss of the Kuban and the North Caucasus, the remnants of the White Army were concentrated on the Crimean peninsula. Denikin reorganized the remnants of the army. On April 4, 1920, Denikin appointed Wrangel the Commander-in-Chief of the All-Union Socialist League.

Reorganization of the White Army

After the loss of the Kuban and the North Caucasus, the remnants of the White Army were concentrated on the Crimean peninsula. Denikin reorganized the remnants of the All-Union Union of Liberal Democratic Forces. The remaining troops were brought into three corps: Crimean, Volunteer and Don, Consolidated cavalry division and Consolidated Kuban brigade. The remaining excess headquarters, institutions and units gathered on the peninsula from all over the South of Russia disbanded. The remaining personnel was sent to staff the existing troops.

The headquarters was located in Feodosia. The Crimean corps of Slashchev (about 5 thousand fighters) still covered the isthmuses. A consolidated detachment (1,5 thousand people) was deployed in the Kerch region to ensure the peninsula from possible landing from Taman. All other troops were located in reserve, for rest and recovery. Volunteers stood in the region of Simferopol, donts - in Yevpatoriya. In general, Denikin’s army had 35-40 thousand people with 100 guns and about 500 machine guns. The forces were enough to defend the peninsula, but the army was tired physically and mentally, which created the basis for further decomposition. Not enough inventory weapons and equipment. If the volunteers took out their weapons, the Cossacks abandoned it.

The White Army received a respite. The Red Army occupied the northern exits from the Crimean isthmuses. But her forces in the Crimean direction were insignificant, the best units were diverted to the new Polish front. In addition, the offensive impulse of the Reds restrained the activities in the rear of the detachments of Makhno and other rebels. From the side of Taman, no preparation for the landing was observed. The Soviet command rated the North Caucasus operation as decisive and last. It was believed that whites were defeated and the remnants of their forces on the peninsula would be easily finished off. The transfer of significant white forces, their activity, willingness and ability to continue the struggle will come as a surprise to the Reds.

Search for the culprits

Crimea was the center of all kinds of intrigues, where the defeated army, the generals left without troops, and many refugees were now added. They were looking for the perpetrators of the defeat and saviors. The South Russian government of Melnikov, created in March 1920, did not actually begin work. In Crimea, they took him in hostility, criticizing him as being created as a result of an agreement with the autocrats. Denikin, in order to avoid conflict, abolished the South Russian government on March 30. Former members of the government left Sevastopol for Constantinople.

Officers and generals were also looking for the perpetrators of the military catastrophe. The scapegoat was one of the leaders of the Volunteer Army and the All-Union Socialist League, chief of staff of the Denikin army, General Ivan Romanovsky. He was considered the culprit of the defeats of the White Army. Accused of liberalism and Freemasonry. They accused of embezzlement, although he was an honest man and constantly experienced material problems. Rumors and gossip brought down the general. Denikin noted in his memoirs:

“This Barclay de Tolly of the volunteer epic took on all the anger and irritation that accumulated in the atmosphere of fierce struggle. Unfortunately, the character of Ivan Pavlovich contributed to the strengthening of hostile relations. He expressed his views bluntly and sharply, not clothed them in the accepted forms of diplomatic craftiness. "
Denikin was forced to remove the "bravest warrior, knight of duty and honor" Romanovsky from the post of chief of staff of the army. Soon Romanovsky, together with Denikin, would leave Crimea and leave for Constantinople. On April 5, 1920, he was killed in the building of the Russian Embassy in Constantinople, Lieutenant M. Kharuzin, a former employee of the counterintelligence of the White Army. Kharuzin considered Romanovsky a traitor to the White movement.

Meanwhile, they were actively intriguing against Denikin himself. The Don command believed that the volunteers “betrayed the Don” and suggested that the Cossacks leave the peninsula and make their way to their native villages. The command of the white front intrigued in favor of Wrangel. The Duke of Leuchtenberg proposed to revive the monarchy, advocated for Grand Duke Nikolai Nikolaevich. The British proposed "democracy." Left without a destination, the generals Borovsky and Pokrovsky led their game. The new commander-in-chief was the former commander of the Caucasian Army Pokrovsky. The clergy, who led the extreme right, advocated Wrangel. Bishop Benjamin said that “in the name of the salvation of Russia,” General Denikin must be forced to resign and transfer it to General Wrangel. Like, only Wrangel will save the Motherland. Infected with universal bacchanalia, the commander of the Crimean corps, General Slashchev, also tried to play his game. He first contacted Wrangel, then Sidorin, then with the Duke of Leuchtenberg, then with Pokrovsky. Slashchev proposed that a meeting be convened and that Denikin should withdraw from command. 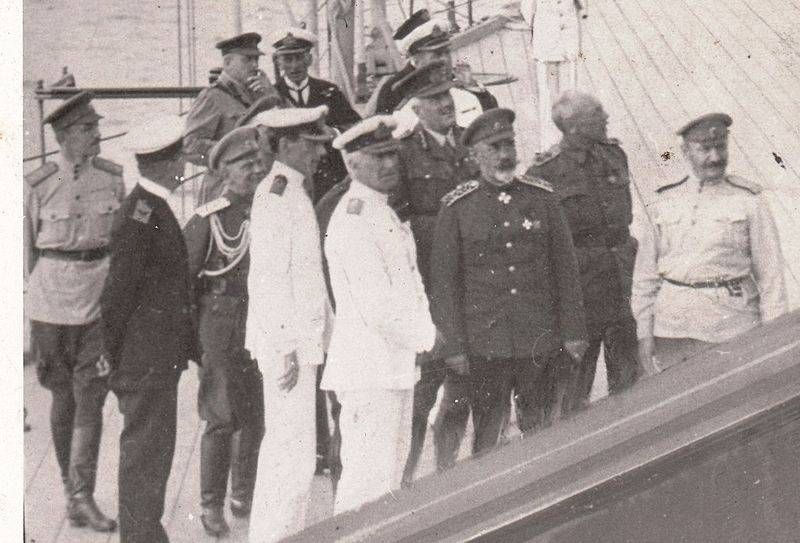 The resignation of the commander

Volunteer Corps of General Kutepov remained the basis of the army and its most combat-ready part. The fate of the commander in chief depended on the mood of the volunteers. Therefore, many conspirators tried to persuade General Kutepov to their side. They all received a general refusal. Kutepov reported on these machinations and suggested that Denikin take urgent measures.

However, Denikin had already decided to leave his post. He convened a military council in Sevastopol to elect a new commander in chief. It included members of the headquarters, commanders of corps, divisions, units of brigades and regiments, commandants of fortresses, navy the command, which was out of work, but popular generals, including Wrangel, Pokrovsky, Yuzefovich, Borovsky, Schilling, etc. Denikin appointed General Dragomirov as chairman of the council. In a letter to Dragomirov, Denikin noted:

“God did not bless the success of the troops I led. And although faith in the vitality of the army and in it historical I have not lost my calling, but the internal connection between the leader and the army is broken. And I can’t lead her anymore. ”
Apparently, Denikin was just tired. Endless war and political intrigue. His authority in the troops fell. A new man was needed in which people would believe. The new leader could give new hope. The Military Council met on April 3, 1920. The meeting was stormy. Representatives of the Volunteer Corps unanimously wanted to ask Denikin to remain in his post and expressed full confidence in him. Volunteers categorically refused the election. When Dragomirov announced that this was the decision of Denikin himself, the volunteers began to insist that Anton Ivanovich himself appoint his successor. They were supported by the Kuban. The Don people announced that they could not point to a successor, believed that their representation was insufficient. Slashchev believed that his corps did not have a sufficient number of representatives at the meeting (under the conditions of a possible offensive by the Reds, part of the corps command remained at the forefront). He also noted that the election of the commander in chief could adversely affect the troops. The naval command advocated Wrangel.

As a result, they didn’t come to anything. Dragomirov sent a telegram to the commander in chief, where he wrote that the council recognized it impossible to resolve the issue of commander in chief. The military council asked Denikin to appoint a successor. At the same time, the fleet supported Wrangel, and the ground forces offered Denikin to keep his post. However, Denikin did not change his position. He replied: "Morally overwhelmed, I cannot stay in power for a single day." He demanded that the Military Council make a decision.

On April 4, Dragomirov shared the council, admitting only senior commanders to it. On the same day Wrangel arrived from Constantinople. He led the ultimatum of the British. England proposed stopping the unequal struggle and, through its mediation, begin negotiations with the Bolsheviks on peace under an amnesty for the population of Crimea and the white troops. In the event of rejection of this proposal, the British relieved themselves of responsibility and ceased any support and help to whites. Obviously, the British in this way supported the candidacy of Wrangel. The meeting itself was delayed again. They discussed the message of Britain for a long time. Slashchev said that he was against the election and went to the front. As a result, the opinion of the military leaders was in favor of Wrangel.

On April 4 (17), 1920, Denikin appointed Lieutenant General Pyotr Wrangel as the Commander-in-Chief of the FJUR. On the same day, Denikin and Romanovsky left the Crimea and went to Constantinople in foreign ships. After the death of Romanovsky, Denikin on a British ship left for England. In exile, Denikin tried to help the Wrangel army. He met with parliamentarians and members of the government, appealed to the ruling circles and the public, spoke in the press. He proved the fallacy of reconciliation with Soviet Russia and the cessation of aid to the White Army. In protest against the desire of London to make peace with Moscow, left England in August 1920 and moved to Belgium, where he devoted himself to historical work. He wrote the history of the Civil War - "Essays on Russian Troubles." 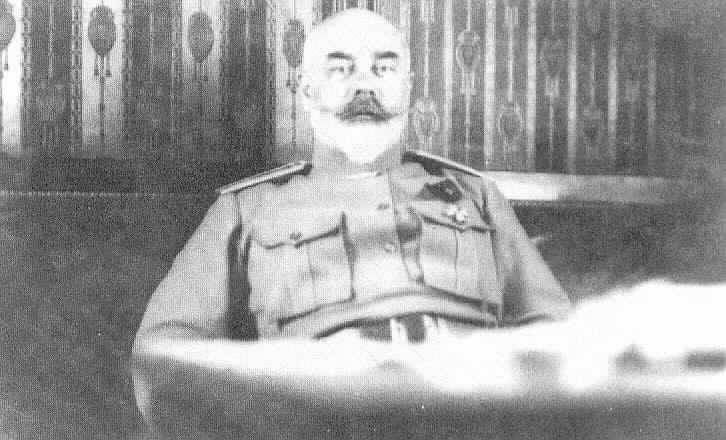 General A.I. Denikin on the day of his voluntary resignation from the post of commander in chief of the Armed forces of the South of Russia

Ctrl Enter
Noticed a mistake Highlight text and press. Ctrl + Enter
We are
How Slashchev Crimea defended"General's Council of Deputies" or as chosen by the Commander-in-Chief of Wrangel
100 comments
Information
Dear reader, to leave comments on the publication, you must to register.