"The danger of Wrangel is becoming enormous ..." 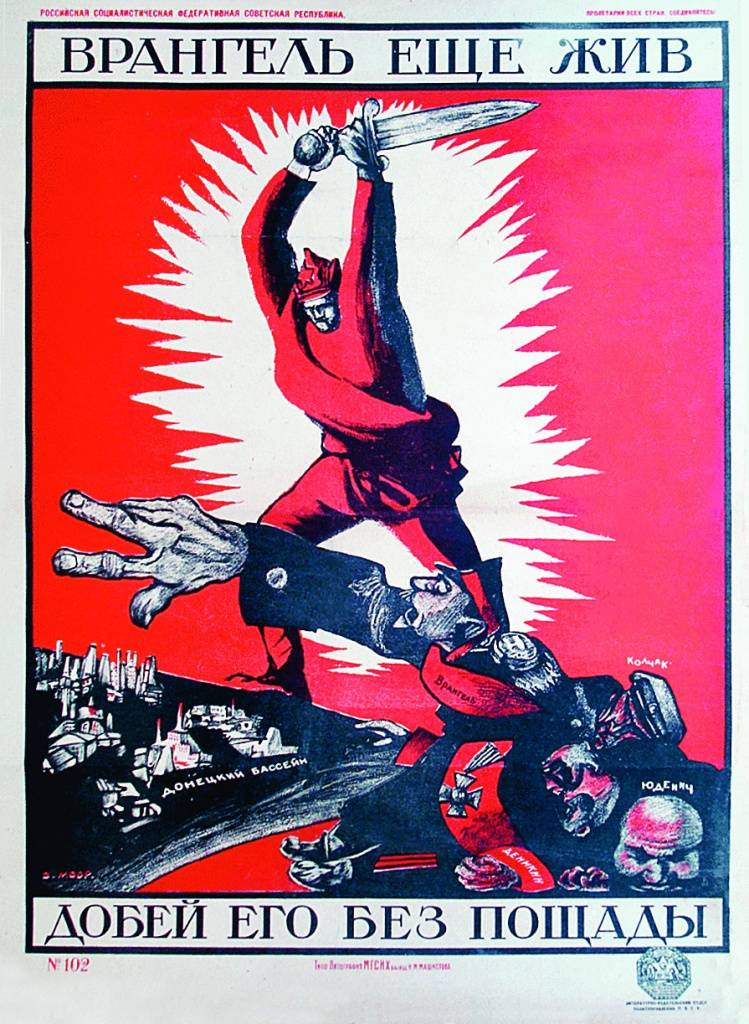 In the face of defeat on the Polish front, large-scale insurgent, peasant and bandit uprisings throughout Russia (Caucasus, Ukraine, Central Russia, Volga, Siberia and Turkestan), a breakthrough of the Wrangelites from the Tavria region to the north could lead to a new increase in the scale of the civil war.

"To recognize the Wrangel front as the main one ..."

On August 5, 1920, the plenum of the Central Committee of the RCP (b) recognized the priority of the Wrangel front over the Polish one. This was due to the "dizziness from the successes" of the Soviet military-political leadership. It was believed that Poland had almost fallen, that Warsaw would be red. On August 19, the Politburo made the decision "To recognize the Wrangel front as the main one ..." At that time, Tukhachevsky's armies were defeated and were retreating from Warsaw. However, Wrangel's army was considered the main threat.

Why? The answer is in the internal situation in Soviet Russia. The country was covered by a new wave of uprisings and riots. The Bolsheviks destroyed the main centers of resistance of the White Army. However, a large-scale peasant war was still raging in Russia. Failed to suppress the criminal revolution. Various insurgents, the remnants of the defeated White Guards, deserters of various armies, chieftains, fathers and crime bosses raged everywhere. Peasant uprisings engulfed the provinces of Siberia, where, until recently, the red partisans became one of the main reasons for the defeat of Kolchak's army. Now the same peasant leaders rose up against the Bolsheviks, the atrocities of the Cheka and the surplus appropriation system.

In Bashkiria, in the spring, one peasant uprising was suppressed (the uprising of the "Black Eagle"). In the summer, a new uprising began. One of its leaders was Akhmet-Zaki Validov. After the 1917 revolution, he advocated "autonomy" (in fact, independence) of Bashkiria with the inclusion of part of the territories of the Orenburg, Perm, Samara and Ufa provinces. Then he opposed the Kolchak government, received the support of the Bolsheviks. The Bashkir Soviet Republic was established. When Moscow began to restrict the autonomy of the Bashkir Republic, Validov and other members of the Bashkir Revolutionary Committee resigned and headed the anti-Soviet movement. Then Validov fled to Turkestan, where he was organizing the Basmach movement. 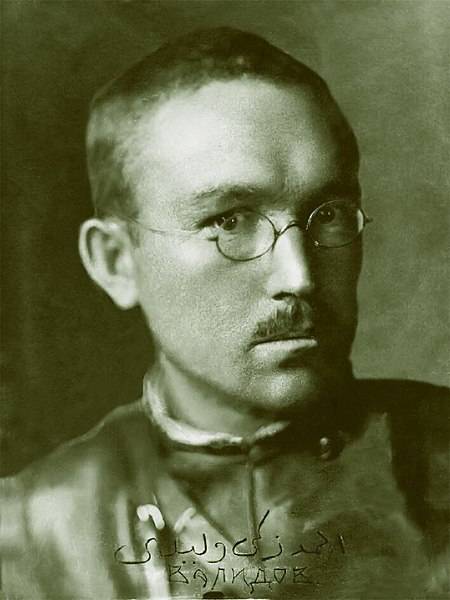 The Greens operated on the border of the Perm and Chelyabinsk provinces. The Samara province was seized by the Sapozhkov uprising. Alexander Sapozhkov was a participant in the German campaign. At first he supported the Left SRs, then went over to the side of the Bolsheviks. He was a member of the Samara provincial committee, formed Red Guard detachments from revolutionary-minded peasants and former front-line soldiers. The Red Guard brigades of Sapozhkov and Chapaev entered the 1918th Army of the Eastern Front, created in June 4. The brigade defended Uralsk from the White Cossacks and the Komuch army. Sapozhkov proved to be a talented commander. He headed the 22nd Infantry Division, which successfully fought back in the surrounded Uralsk from the Ural White Cossacks of General Tolstoy. The division held the defense for 80 days, it was removed by Chapaev's group. The heroic defense of Uralsk glorified the 22nd division: three of its regiments were awarded the Honorary Revolutionary Red Banners, another regiment and over 100 people were awarded the Orders of the Red Banner. The division commander himself received a telegram of greetings from Lenin.

Then the 22nd division was transferred to the Southern Front, but Sapozhkov was sent to the rear to form a new division "for inept command and for a corrupting policy". The 9th Cavalry Division was formed from former soldiers of the 25th Chapayev Division (mainly peasants) and the Ural Cossacks, who went over to the side of the Reds. There were many Left SRs among the commanders. Discipline was weak, violence against local residents and anti-Soviet sentiments flourished. The command of the division did not suppress these sentiments, rather, on the contrary. The reason for the uprising was the removal of Sapozhkov from the post of division commander. In response, on July 14, 1920, Sapozhkov and the commanders of his division revolted. They created the 1st Red Army, Pravda. The Sapozhkovites opposed the commissars and old military experts, demanded the reorganization of the Soviets, the abolition of the policy of war communism (the abolition of the surplus appropriation system, food detachments, the return of free trade, etc.).

The rebels took Buzuluk, but on July 16 the Reds recaptured it. Sapozhkov retreated from the city to the southeast. In this regard, Fedorov, the chief of the operational department of the Zavolzhsky military district, reported: “The further he moves south, the more sympathy among the population Sapozhkov meets, and the more successful his mobilization. Sapozhkov is rejoiced here, we are feared and hated. The further Sapozhkov moves, the more difficult it will be to fight him. " The command of the military district acted very unsatisfactorily. Therefore, the fight against the rebels continued throughout August. The Sapozhkovites even tried to take Uralsk and Novouzensk. Only under pressure from Moscow, where they feared the growth of the rebellion, the uprising was suppressed. The forces of the rebels were melting, and they were forced to retreat to the Trans-Volga steppes. On September 6, Sapozhkov died, the remnants of his forces were scattered and captured.

The North Caucasian highlanders in Dagestan were again raised by Imam Gotsinsky. The highlanders of the Gunib, Avar and Andean districts overthrew the power of the Bolsheviks under the slogan "imam and sharia". The uprising spread to Chechnya, where Gotsinsky fled in 1921 when the rebels were suppressed in Dagestan.

The remnants of Denikin's defeated troops were walking in the Kuban. Not all White Guards and White Cossacks were able to evacuate to Crimea. Many hid in the villages, fled to the mountains and coastal swamps. Several large detachments were created, which consisted of hundreds of fighters. In the summer of 1920, the former commander of the 2nd Kuban Division formed the "Army of the Renaissance of Russia" and occupied a number of villages of the Batalpashinsky department. By the time of the Ulagayev landing in the Kuban, Fostikov's army numbered about 5 thousand fighters. After the defeat of the landing Ulagaya, the Red Army was able to crush the troops of Fostikov. In September, the remnants of the White Cossacks fled to Georgia, from where they were taken to the Crimea.

Makhno still reigned in the Left-Bank Ukraine. He was on his own at that time. Wrangel tried to win over the willful dad to his side, but did not succeed. The Makhnovists considered themselves enemies of the White Guards. Right-bank Ukraine, where the front lines of the Polish and the Red had just swept through, was again teeming with detachments, gangs, daddies and chieftains.

In August 1920, a powerful uprising engulfed the Tambov province, neighboring districts of the Voronezh and Saratov provinces. It was headed by the commander of the United Partisan Army and the chairman of the Union of Working Peasants (STK) Pyotr Tokmakov and the chief of staff of the 2nd Insurgent Army, a member of the Socialist-Revolutionary Party Alexander Antonov. The number of rebels reached 50 thousand people. The precondition for the uprising was the policy of war communism (against the background of drought and crop failure). 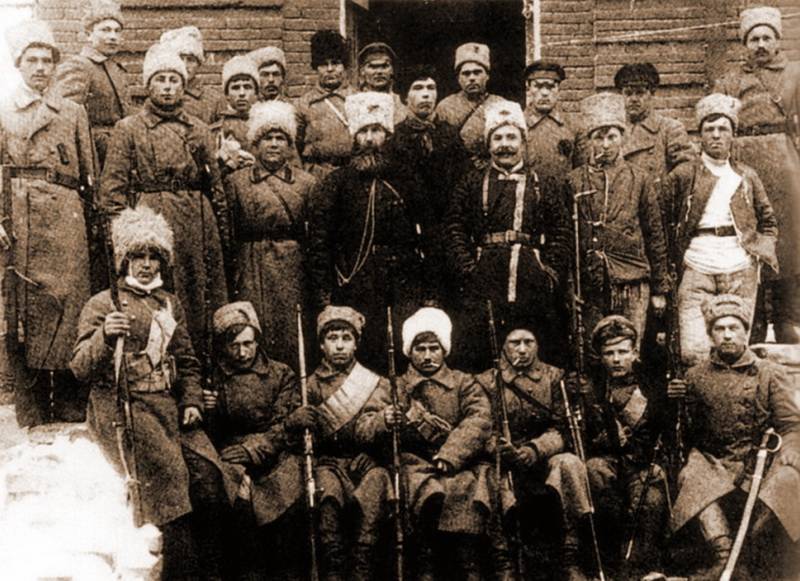 Partisan army of the Tambov province

Wrangel's army could become the center of the organization of a powerful anti-Soviet movement (as in his time Denikin managed to raise the Kuban and Don). In the face of defeat on the Polish front, large-scale insurgent, peasant and bandit uprisings throughout Russia (Caucasus, Ukraine, Central Russia, Volga, Siberia and Turkestan), the breakthrough of the Wrangelites from the Tavria region to the north could lead to a new increase in the scale of the civil war. In early August 1920, Lenin wrote to Stalin: "In connection with the uprisings, especially in the Kuban, and then in Siberia, the danger of Wrangel becomes enormous, and within the Central Committee there is a growing desire to immediately conclude peace with bourgeois Poland ..."

As soon as the Wrangelites began an operation in the Kuban, the Soviet command again decided to repeat the offensive in Tavria - from Kakhovka and Aleksandrovsk. Gorodovikov's 2nd Cavalry Army was to strike from the eastern flank, from the Aleksandrovsk region to Melitopol. On the right flank, Blucher's strike group from the 51st and 52nd rifle divisions was preparing for the offensive. This time, the right-flank group inflicted the main blow not on Perekop, but on Melitopol, in order to join up with Gorodovikov's cavalry. Only one division, the Latvian, was advancing on Perekop.

Thus, as before, the red command planned to encircle most of Wrangel's army in Tavria, to prevent the enemy from leaving for the Crimea. In addition, there was a hope that if it did not come out to destroy the enemy's army, then at least the threat from the northern direction would prevent the White Guards from transferring additional forces to the Kuban, or even force the White command to transfer the landing units of the Ulagaya group to the north.

Battle of Rostov
The disaster of white Odessa
How Slashchev Crimea defended
Dono-Manych battle
The death of the Northern Army Miller
Why Western agent Kolchak is turned into a hero and martyr of Russia
The defeat of the army of Denikin in the battle of Tikhorets
How did the Ice Siberian campaign end
The fall of the White Kuban
Agony of White Novorossiysk
The death of the Kuban army
Denikin's resignation
Far Eastern Republic and the Japanese threat
Polish "liberation" campaign in Kiev
Baku “Blitzkrieg” of the Red Army
The battle for Belarus. May operation of the Red Army
War of the Russian Army Wrangel
The first victories of the Wrangel army
The defeat of the 13th Soviet Army in Northern Tavria
Our Kiev!
The battle for Rivne. How Budyonnovtsy smashed the Polish defense
Minsk is ours! The defeat of the Polish army in Belarus
Battle for Lviv. The failure of the Red Army in Galicia
The death of the cavalry group Rednecks
The fierce battle for the Kakhovsky bridgehead
The defeat of the landing group Ulagaya
"Miracle on the Vistula"
How Tukhachevsky destroyed his armies on the Vistula
Battle of Komarov. Defeat of the 1st Cavalry Army
Bukhara Blitzkrieg Frunze