The battle for Rivne. How Budyonnovtsy smashed the Polish defense 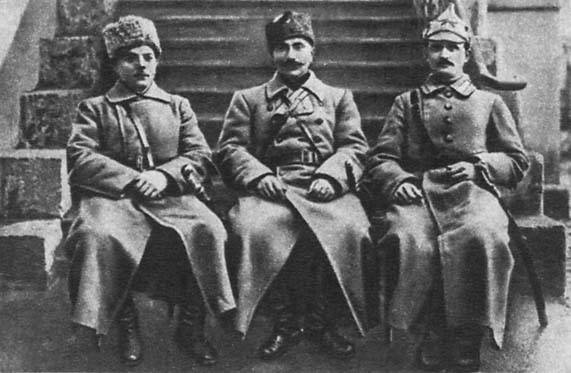 100 years ago, the Red Army defeated the 2nd Polish Army and liberated Rivne. Budyonny's cavalry in mid-July 1920 broke into the territory of Western Ukraine. The success of the armies of the Southwestern Front created favorable conditions for the transition to the general offensive of the troops of the Western Front in Belarus.

The Polish command, trying to save the front in Ukraine from complete collapse, transferred there all reserves and part of the troops from Belarus. This facilitated the advance of the armies of Tukhachevsky.

During the Kiev operation, the strategic initiative firmly passed into the hands of the Red Army. After the liberation of Kiev, Soviet troops continued their offensive with the goal of liberating the rest of Ukraine. The defeat of the 3rd Polish army in the Kiev direction forced the Polish command to withdraw the troops of the 6th army on the south wing. June 20, 1920 the troops of the 14th Soviet Army occupied Kalinovka and Zhmerynka. The South-Western Front entered the line Zhytomyr - Berdichev - Kazatin - Vinnitsa.

Budyonny’s 1st Cavalry Army (about 20 thousand bayonets and sabers, about 100 guns and 670 machine guns, a group of armored trains) set the task to continue the offensive in the direction of Novograd-Volynsky and Rivne in order to pursue the 3rd Rydz-Siigly’s 2rd army along a parallel route, cut it off from the Southern Bug. Polish troops occupied the defense at the turn of the rivers Uzh, Ubort and Sluch. The Sluch group of General Romer confronted the Soviet forces directly: 1 infantry and 24 cavalry division (about 60 thousand people, 360 guns and XNUMX machine guns).

On June 19, 1920, the Novograd-Volyn operation began. Immediately break into the operational space Budyonny army could not. It was possible to break the stubborn resistance of the Poles to the red cavalry only a week later. At the same time, the Poles successfully retreated to well-prepared rear defense lines and constantly counterattacked. Only on June 27, Soviet troops were able to occupy Novograd-Volynsky. Polish troops quickly went to Korets and Shepetovka. The 45th Infantry Division, which was part of the 1st Cavalry Army, occupied Novo-Miropol on the 28th. After a fierce battle on June 27-28, Kotovsky’s cavalry brigade occupied the town of Lyubar, which covered the way to Shepetovka.

The Polish defense cracked again, and a gap of 6 km was formed between the 3th Polish army (2 infantry divisions and the Ukrainian group) and the newly created 2nd army (2 infantry divisions and 80 infantry brigades), which covered Lviv and Rivne directions. The Polish army began to move west along the entire front. Other armies of the Soviet Southwestern Front also successfully advanced: the 12th Army liberated Korosten, Mozyr and Ovruch, and the 14th Army Zhmerinka.

The breakthrough of the Polish defense in Little Russia and the withdrawal of Polish troops to the west, in turn, laid bare the southern flank of the Polish Northeast Front. This led to the fact that on June 18 the Polish forces began to withdraw, which stood in front of the Mozyr group of the Soviet Western Front in the vicinity of the town of Rechitsa. Using the success of Yegorov’s front, the commander of the troops of the Mozyr group Khvesin began the pursuit of the enemy. Our troops crossed the Dnieper and liberated Mazyr on the night of June 29. The offensive of Khvesin’s troops led to the destruction of the integrity of the Polish defense in Belarus. For the initiative shown, Khvesin was awarded the Order of the Red Banner. Developing the offensive, the left flank of the Western Front by the end of the month left neither the Zhlobin-Mozyr railway line. 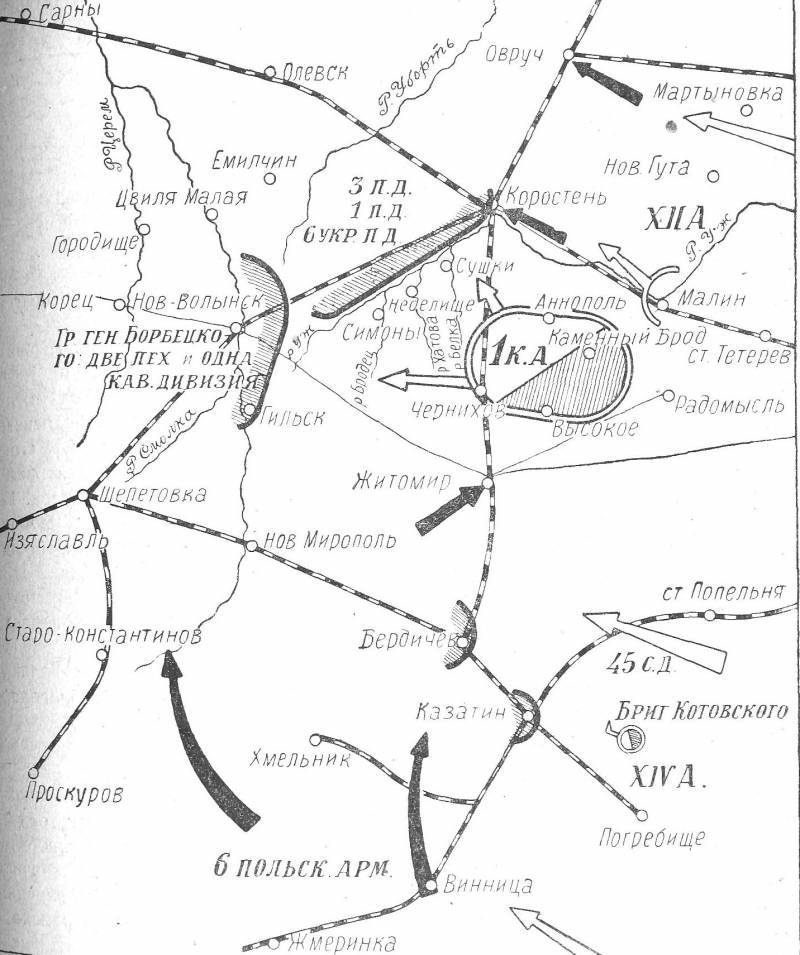 On June 27, 1920, the Revolutionary Military Council of the Southwestern Front set new tasks in the development of the offensive. The troops of the 12th Army of Voskanov, together with the 1st Cavalry Army, were to occupy the Rivne region. The 14th army of Uborevich received the task of occupying the Starokonstantinov and Proskurov. If successful, Yegorov’s army split the enemy’s front in two, discarding the Poles in Polesie and Romania. The Red Army got the opportunity to develop an attack on Lublin and Lviv. The main blow was dealt by the 1st and 12th armies. Budyonny’s army had about 24 thousand soldiers, the strike group of the 12th army numbered 12 thousand people, over 60 guns, more than 760 machine guns and 6 armored trains. They were opposed by the Polish 2nd Army - about 21 thousand people.

Meanwhile, the Budyonny army, without a pause, developed an offensive on Rivne. Polish troops tried to counterattack. On July 2, 1920, a counter battle took place near Rivne. Polish troops were defeated. On July 3, the main forces of the Budyonny army (3 divisions) took Ostrog, crossed the Goryn River and began to cover Exactly from the south and south-west. One division provided an offensive from the northeast, the rifle division and two cavalry brigades marched to Shepetovka. At the same time, the 12th Soviet Army, breaking the enemy’s resistance, reached the Mozyr region and the Uborot River. The 14th Army broke through the front of the 6th Polish Army, the 8th Cavalry Division entered the enemy rear and took Proskurov on the night of July 4. The management of the 6th Polish Army was disorganized.

The Polish command was preparing flanking counterattacks on the Budyonny army. From the south, from the Starokonstantinov region, an infantry division and brigade, a Lancers regiment, were to advance; from the north - infantry division supported by tanks and armored trains. However, the Budennovites, with the support of units of the 12th Army, broke the resistance of the Poles and on July 4 they took Exactly and foiled the enemy’s plans. About 1 thousand prisoners, 2 armored trains and 2 tanks were captured. This created the threat of a large gap in the Polish defense and a breakthrough of Soviet troops far to the west. The Polish command was forced to begin the withdrawal of troops.

On July 7, 1920, the 11th Cavalry Division occupied Dubno. Meanwhile, the 2nd Polish Army, moving west, was strengthened by 3 infantry divisions and a cavalry regiment at the expense of the 3rd and 6th armies. Polish troops launched a counterattack on July 7-8 with the goal of defeating the Red Cavalry. On July 8–9, the Poles even temporarily occupied Rivne, but Budyonny's cavalry possessed greater maneuverability. The 4th, 6th and 14th cavalry divisions quickly regrouped, launched a powerful counterattack, and on July 10 knocked out the enemy from the city. The Poles retreated again. Pursuing the enemy, Yegorov’s armies reached the line of Sarny - Rivne - Proskurov - Kamenetz-Podolsky.

Thus, the Soviet troops inflicted a heavy defeat on the 2nd Polish army. Polish troops retreated to the west. The conditions were created for the development of an attack on Lublin and Lviv. Egorov’s armies began to threaten the southern flank of the Polish Northeast Front, which crackled under the blows of the Western Front of Tukhachevsky. The victories of the Southwestern Front contributed to the July offensive of the Soviet Western Front, as the Polish high command, trying to stabilize the situation in Ukraine, threw all reserves there and withdrew part of the troops in White Russia. The main role in the operation was played by Budenny's equestrian divisions, which operated in a significant separation from the main forces of the front. The actions of the Budennovsky cavalry were distinguished by great maneuverability, activity and determination. The absence of a continuous positional front facilitated the actions of large masses of cavalry.

On July 11, 1920, the front command gave the troops new directions. The 12th Army was to develop an offensive on Kovel and Brest-Litovsk; 1st Cavalry Army - to Lutsk, Lublin, bypassing the Brest-Litovsky district; The 14th Army covered the offensive of the main forces from the side of Galicia, attacked Ternopol and Lviv. As a result, the main forces of the Southwestern Front were to turn to Brest and assist the advance of the Western Front. However, in fact, Budyonny’s troops were connected by battles with a strong enemy group in the area of ​​Dubno, Brody, Kremenets and deviated to the southwest direction. 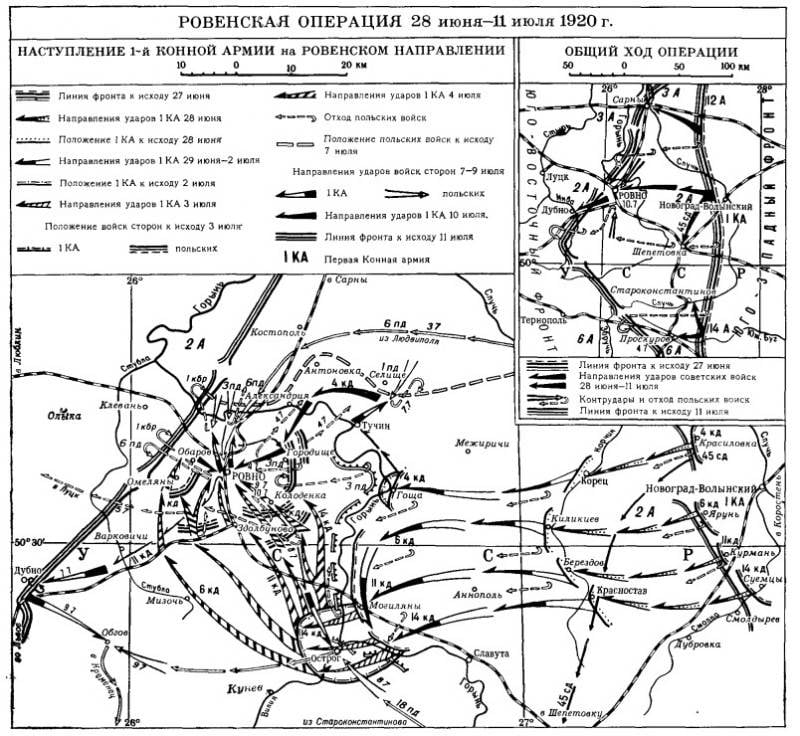 Battle of Rostov
The disaster of white Odessa
How Slashchev Crimea defended
Dono-Manych battle
The death of the Northern Army Miller
Why Western agent Kolchak is turned into a hero and martyr of Russia
The defeat of the army of Denikin in the battle of Tikhorets
How did the Ice Siberian campaign end
The fall of the White Kuban
Agony of White Novorossiysk
The death of the Kuban army
Denikin's resignation
Far Eastern Republic and the Japanese threat
Polish "liberation" campaign in Kiev
Baku “Blitzkrieg” of the Red Army
The battle for Belarus. May operation of the Red Army
War of the Russian Army Wrangel
The first victories of the Wrangel army
The defeat of the 13th Soviet Army in Northern Tavria
Our Kiev!