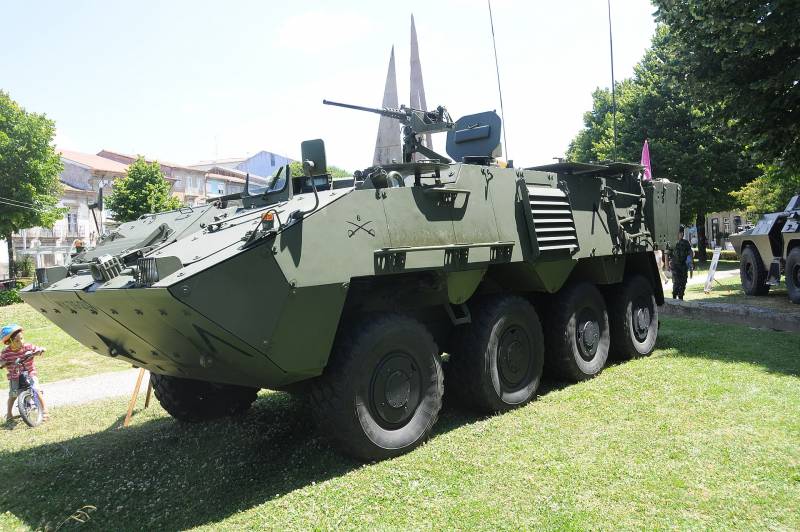 Combat buses. The modern multi-purpose wheeled armored fighting vehicle Pandur II, designed in Austria by the designers of the Steyr-Daimler-Puch Spezialfahrzeuge, was a successful solution for the European market. Pandur II was released in hundreds of units in the BTR and BMP variants, while licensed production of wheeled armored vehicles was established in Portugal and the Czech Republic. In addition, Pandur II armored personnel carriers were acquired by Indonesia, which also expects to deploy their localized production called Pindad Cobra 8x8.

Today, the Austrian wheeled armored vehicle Pandur II is mass-produced in three countries. In addition to Austria, they are engaged in licensed assembly in the Czech Republic at Tatra Defense Vehicle and in Portugal at Fabrequipa. In total, in the world GDELS supports the operation of more than three thousand combat vehicles on all Pandur platforms, of which more than a thousand are operated by countries members of the NATO military-political bloc. 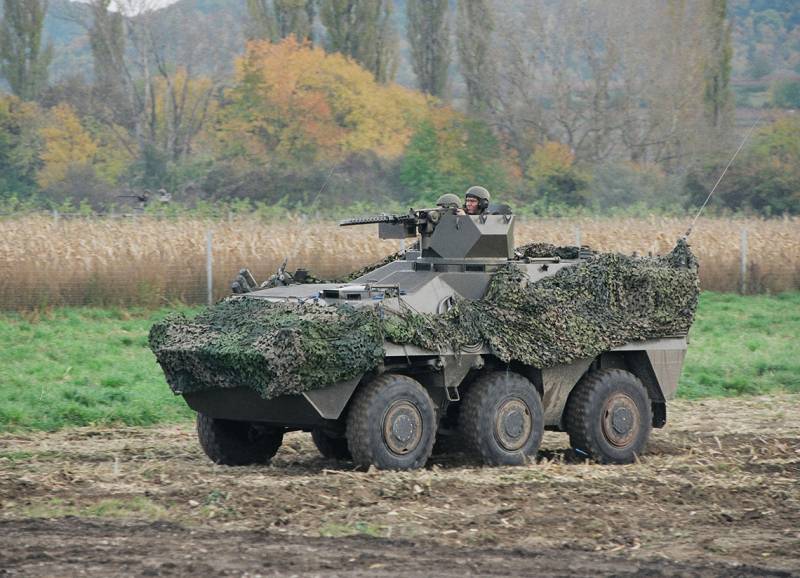 Armored personnel carrier Pandur I
It is worth noting that the company Steyr-Daimler-Puch Spezialfahrzeig itself is today the largest supplier of wheeled armored vehicles for the needs of the Austrian army. Despite the fact that after the end of World War II, Austria became a neutral country and retains this status until now, not being a member of any military blocs, the country has maintained a compact but well-equipped armed forces. In total, just over 50 thousand people serve in the Austrian army. Despite the small size of the armed forces, many samples used by the Austrian military weapons They are local developments: from the famous Glock pistols and Steyr AUG assault rifles to Pandur armored personnel carriers and Ulan tracked infantry fighting vehicles.

The Pandur I armored personnel carrier with a 6x6 wheel formula was started to be developed back in 1979, the first machine samples appeared by 1984, but only in 1993 was the first contract for the supply of these armored personnel carriers for the Austrian army concluded. The car was light, floating and at the same time quite well protected. Without the installation of an additional reservation, it provided circular protection for the landing party and crew from armor-piercing bullets of 7,62 mm caliber. However, by the beginning of 2000, military requirements for wheeled armored vehicles had grown significantly. It required a new combat vehicle with better frontal and circular protection, a more powerful engine and improved mine protection.

The answer to the challenges of the time was work on a modernized version of the BTR, originally in the Pandur II version with a 6x6 wheel arrangement. The first such samples were ready by the end of 2001, but very quickly the interest of customers and potential users of the new wheeled armored vehicles began to shift towards the model with the 8x8 wheel formula, which finally became the main one for armored personnel carriers in many countries of the world. The first prototype of a four-axis multi-purpose combat vehicle was ready in 2003. The model was very successful and interested foreign customers. The first country to buy the Pandur II in February 2005 was Portugal, and a year later the Czech Republic also ordered new wheeled armored vehicles. 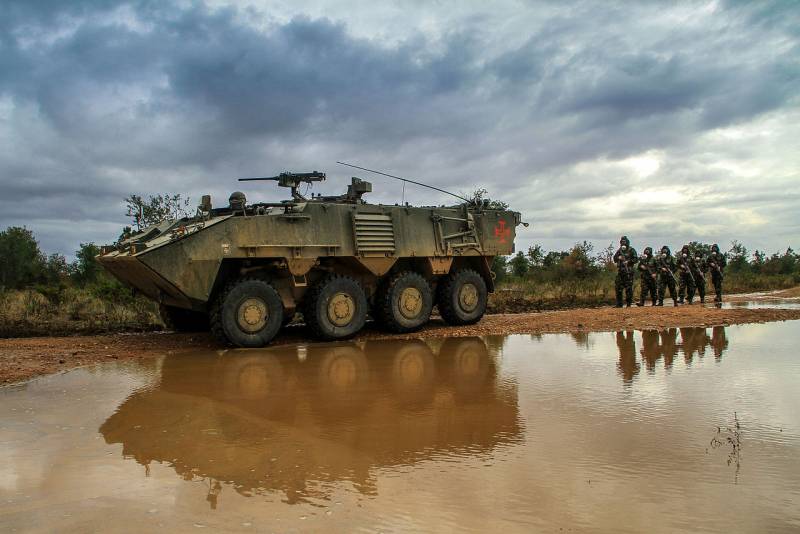 The basic version of the Pandur II armored personnel carrier received an all-welded steel case, which, as a rule, is made from steel grades of an increased level of strength. The supplier of armor plates is the Swedish metallurgical company SSAB, specializing in the manufacture of high-strength steel. The body of the Pandur II combat vehicle with an 8x8 wheel formula has a length of just over 7,5 meters, a width of 2,68 meters, a height of 2,08 meters (on the roof of the hull). At the same time, the useful internal volume of the armored personnel carrier is quite impressive and amounts to 13 cubic meters. The clearance is 450 mm, the track width is 2200 mm.

The layout of the car is classic for the vast majority of modern armored personnel carriers of Western countries. In the front of the case on the left side is the driver’s seat, on the right side of it is the engine. The engine and transmission compartment is isolated and equipped with fire fighting equipment. Behind the mechanical drive is the place of the commander of the combat vehicle and a spacious landing compartment. In the version of the armored personnel carrier, the crew of the car consists of two people, while it can carry up to 10-12 motorized rifles. When installing a tower with a 30-mm automatic gun, the capacity of the machine drops to 6 infantrymen. 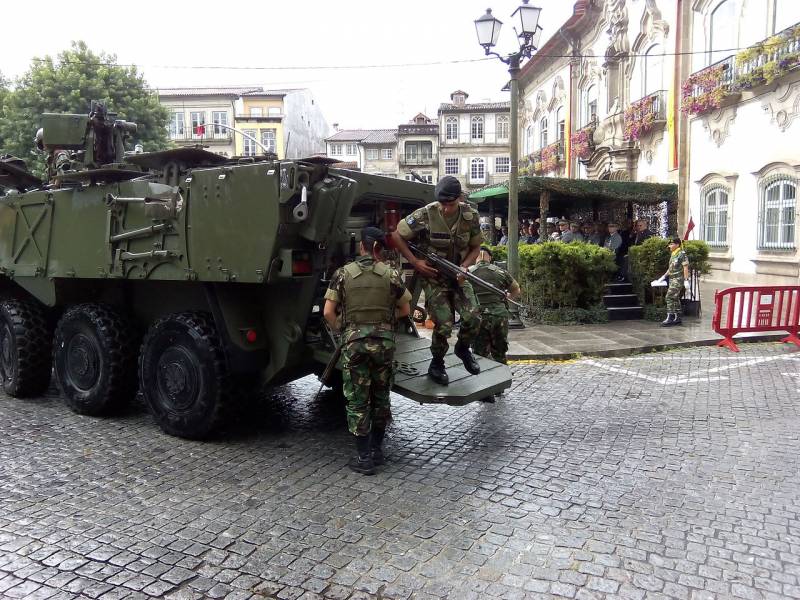 Portuguese military leave armored personnel carrier Pandur II
Reservation of the housing as standard provides frontal protection against armor-piercing incendiary bullets of 14,5 mm caliber and circular protection against shelling with 7,62 mm caliber armor-piercing bullets. At the same time, booking can be easily strengthened by installing hinged armor, there is such an opportunity, and the increase in weight of the machine is compensated by a powerful engine. Also, the armored personnel carrier is characterized by improved mine protection. Pandur II initially received a V-shaped bottom, as well as special mine-landing suspension seats for the crew and the landing team developed by Steyr. The landing seats are located along the sides of the hull, the infantrymen are sitting facing each other. To get out of the car, motorized rifles use swing doors or a ramp in the stern of an armored personnel carrier.

The total combat weight of the Pandur II in the version of the armored personnel carrier is 22,5 tons. Cummins' six-cylinder in-line ISLe HPCR diesel engine delivers a maximum output of 450 hp. The engine is paired with an automatic transmission ZF 6HP602C. The Pandur II has a fairly powerful power plant, which allows you to disperse an armored personnel carrier along the highway to a speed of 105 km / h, while the maximum range of the combat vehicle is up to 700 km and the fuel supply is 350 liters.

The vast majority of all released Pandur II has an 8x8 wheel arrangement, while two front pairs of wheels are controllable. The suspension of all wheels is independent. The armored car uses special tires with inserts that provide movement even in the event of a puncture or damage by bullets and fragments. Like other modern armored personnel carriers, the Austrian armored personnel carrier has a centralized system for changing tire pressure, which allows the driver to easily lower the pressure (to a maximum of 0,8 bar). This is necessary to improve the patency of the armored personnel carrier on sandy ground or in marshland. 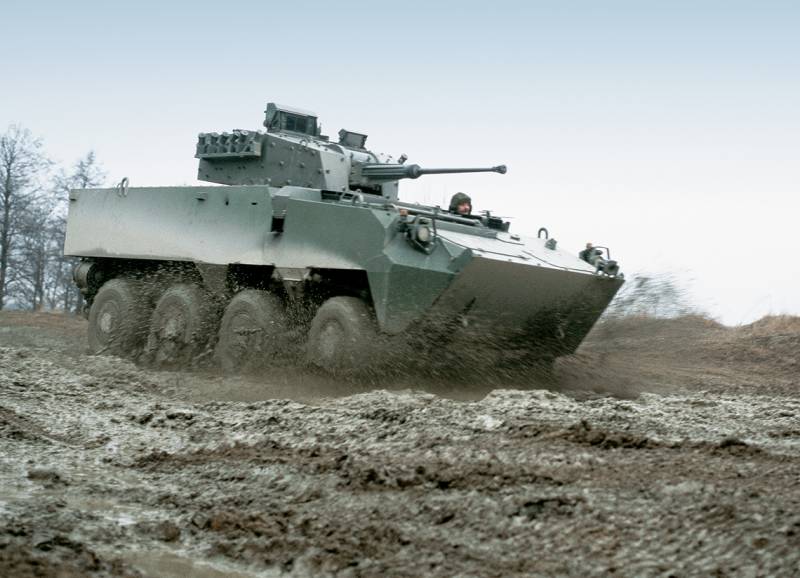 In the version of the classic armored personnel carrier Pandur II carries only machine gun weapons. These can be large-caliber 12,7 mm machine guns mounted on turrets. In this case, it is possible to install both a remotely controlled RWS combat module with a heavy machine gun and a simpler version with manual control. The latter option is cheaper, but dangerous for the shooter, since to fire he has to protrude from the body of the combat vehicle.

A distinctive feature of the entire Pandur II platform is its modularity. In total, Steyr announced 36 different variants of a combat vehicle. For example, on the basis of Pandur II, versions of the light wheeled tank with a 105 mm gun and a self-propelled 120 mm mortar. There are also anti-tank versions of the machine, equipped with modern anti-tank systems.

The Czech Republic for its variants of wheeled BMPs Pandur II chose a remote Samson remote-controlled combat module (RCWS-30) with a 30 mm Mk44 Bushmaster II automatic cannon and a 7,62 mm machine gun. In this version, an arms operator is added to the crew, and the number of paratroopers is reduced to 9 people. Additionally, two Spike-LR ATGMs manufactured by the Israeli company Rafael can be placed on the module. 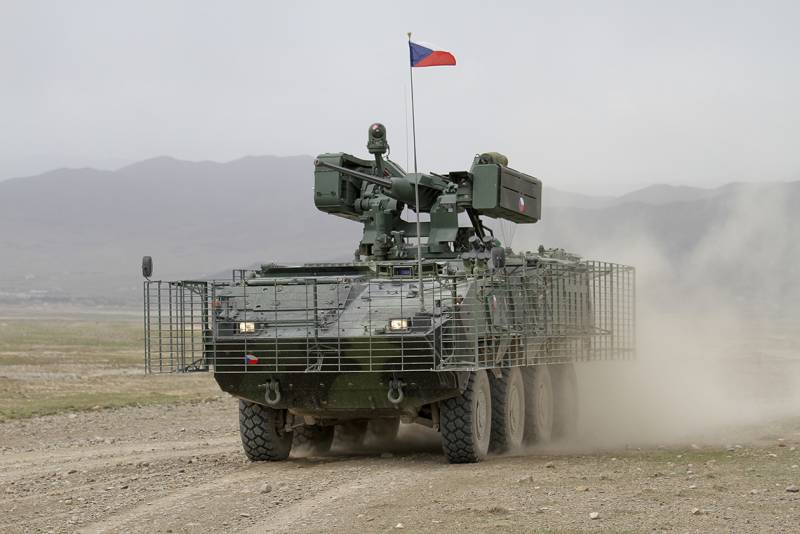 Czech Pandur II with Samson combat module (RCWS-30)
The Portuguese army also has two versions of the Pandur II, armed with 30 mm automatic guns. The first received a standard SP30 twin turret, which is a lightweight version of the Ulan BMP turret with a 30 mm Mauser MK30-2 gun and a 7,62 mm machine gun paired with it. In this case, all weapons are stabilized in two planes. The second option is equipped with a remote Elbit combat module with a similar weapon composition, which can also be supplemented by two Spike-LR ATGMs. In this embodiment, the combat vehicle is used by the Portuguese marines.