Dangerous "Fox" in the service of the Bundeswehr. BTR TPz 1 Fuchs 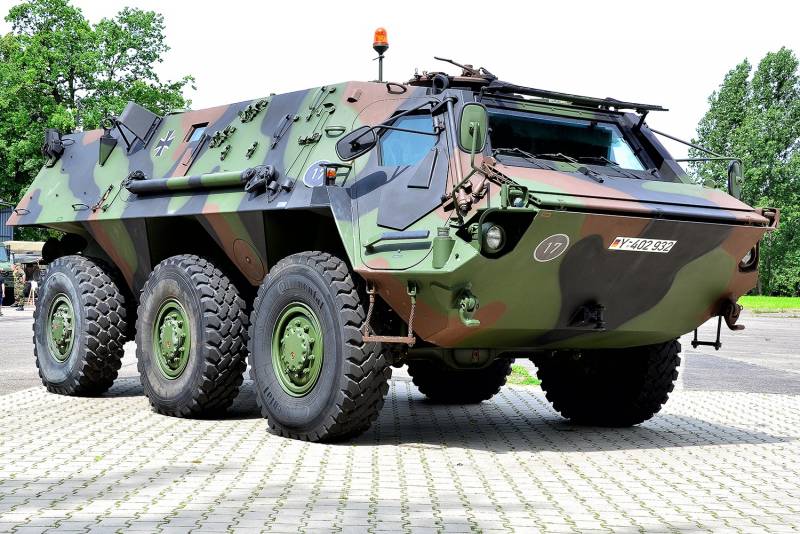 The process of creating an armored personnel carrier TPz 1 Fuchs

Work on the creation of a new wheeled armored personnel carrier, which was to be included in the line of second-generation armored wheeled vehicles for the needs of the Bundeswehr, began back in 1961. The first prototypes were presented to the military in 1964. In the course of work, the project was repeatedly modified, the requirements for the combat vehicle, and the composition of the contest participants changed. For example, in 1966, Henschel, Büssing, KHD, Krupp and MAN worked on creating their own versions of combat vehicles, and later Daimler-Benz also joined them. At the same time, work directly on the armored personnel carrier, which was adopted by the German army under the designation Fuchs ("Fox"), entered the active phase only in the early 1970s. In the Bundeswehr, new wheeled armored personnel carriers were to partially replace the tracked M113 SPZ and Hotchkiss SPz 11-2 of American and French production, respectively.

Issuing technical specifications for the creation of a new combat vehicle, the German military proceeded from the desire to make the design as simple and reliable as possible. In many respects this was dictated by the conditions of the time. The army of Germany at that time was formed due to a draft for military service, for this reason the new wheeled armored personnel carrier was to be as simple as possible in command and development. The calculation was made to train draftees as quickly as possible to operate an armored car, and, therefore, to reduce the cost of training. Particular attention was paid to the fact that the armored personnel carrier could be easily maintained and repaired. In fact, the representatives of the Bundeswehr expected to get a modern combat vehicle, the level of service of which would correspond to serial trucks. Separately stipulated the possibility of providing a circular view. In this case, it was not only about the place of the driver, a good visibility was required to ensure the landing. That is why in the airborne compartment along with the main hatch in the roof of the hull, designed for mounting various weapons, separate observation devices were installed in the sides and doors of the hull. 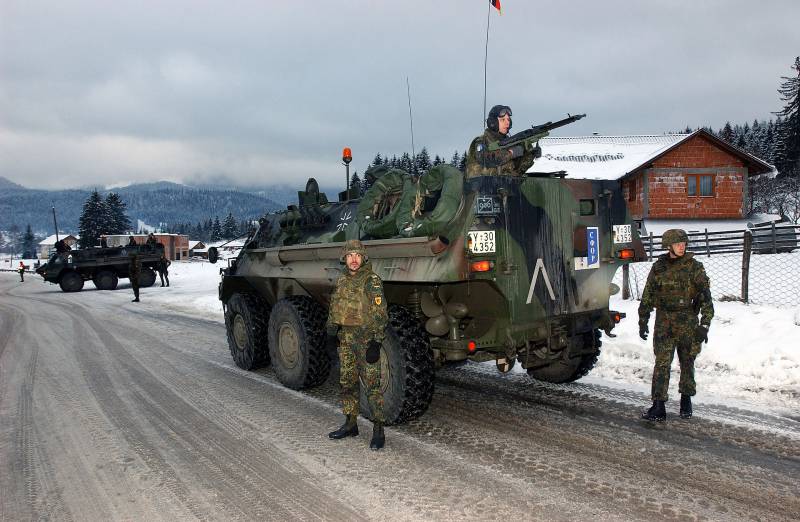 Another requirement of the Bundeswehr was the capacity of the machine. The armored personnel carrier was supposed to carry up to 10 fighters with full armament. At the same time, the soldiers in the airborne squad were planned to ensure satisfactory freedom of movement. Ideally, the crew and the landing should calmly survive a 24-hour stay inside the combat vehicle without the appearance of symptoms of premature fatigue. As one of the measures to increase the convenience of finding the landing inside the combat vehicle, the option of increasing the height of the hull was considered. But this idea was quickly abandoned, since a high center of gravity would seriously limit the passability, the car would lose stability, which could increase the accident rate. Ultimately, the maximum height of the armored personnel carrier was 2300 mm, which is quite comparable to the peer - the BTR-70 Soviet-made. 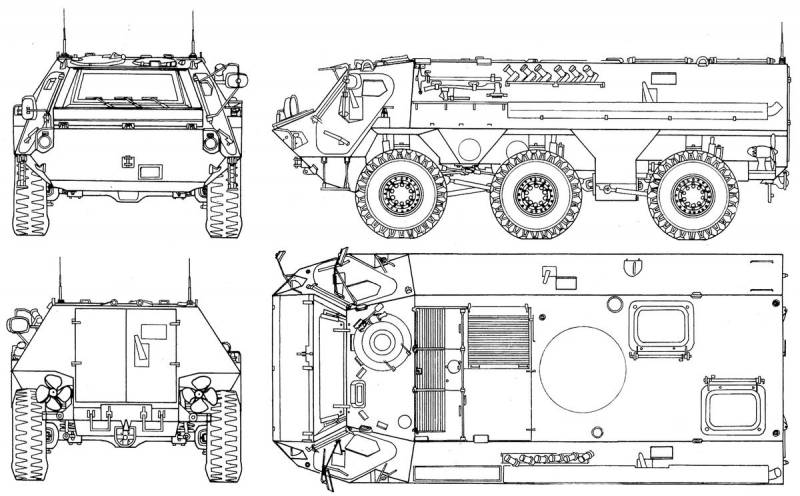 For the Fuchs armored personnel carrier, Daimler-Benz engineers chose a layout with a front-mounted control compartment, a mid-mounted engine and transmission compartment, and aft - an airborne compartment. In this case, the MTO was separated from the departments with a crew and an airborne firewall. You can get from the control compartment to the landing force along the left corridor on the right side of the combat vehicle. The body of the armored personnel carrier is self-supporting, all-metal, made of steel armored plates located at rational angles of inclination. The cross section of the body forms a rhombus. The hull provides protection for the crew and troops from fire from a small weapons rifle caliber (including armor-piercing bullets), as well as fragments of shells and mines. Later, during the modernization, the protection capabilities of the crew and the landing were seriously enhanced through the use of mounted composite armor.

In the control department were the places of the driver and the commander of the combat vehicle. The overview of the road and the situation is provided through the frontal bulletproof glass of a large size, comparable to conventional automobile ones. Also, the review is improved by bulletproof glass installed in the side doors. In combat conditions, all bulletproof glass is easily covered by steel armored shutters. In such conditions, the crew monitors the terrain using periscope observational instruments located on the roof of the hull. In addition to the doors to leave the combat vehicle, the crew can use two hatches in the roof of the hull. 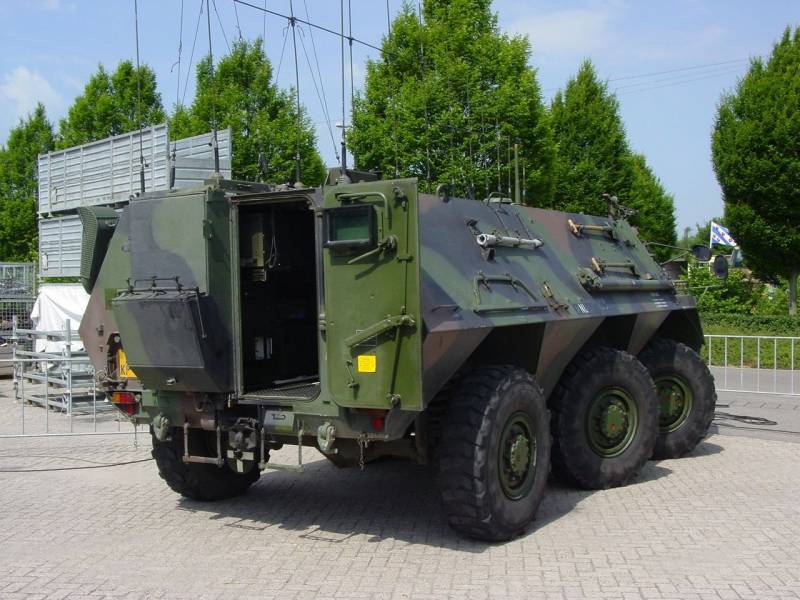 In the landing compartment, which is located in the rear of the armored personnel carrier, could accommodate up to 10 people. Depending on the models, the number of paratroopers could vary. Gradually, for the standard version of the armored personnel carrier, the number of paratroopers was reduced to 8 people, and the squad itself was seriously modernized, including in terms of ergonomics. Inside the combat vehicle, motorized arrows are located on the seats along the sides of the hull - facing each other. The main method of boarding / disembarking from a combat vehicle is the aft double-wing door, this is the safest way to leave an APC, which is implemented on almost all members of the class. Also, for emergency exit of the combat vehicle, paratroopers can use the hatches in the roof of the hull.

As a power plant on the TPz 1 Fuchs installed an 8-cylinder V-shaped diesel engine manufactured by Daimler-Benz OM 402A series. This engine develops a maximum power of 320 hp. at 2500 rpm. The diesel works in conjunction with a 6-speed automatic gearbox. The engine power is enough to disperse an armored personnel carrier with a combat weight of about 17 tons (standard equipment) to 100 km / h when driving on a highway, the speed of the armored personnel carrier on the water does not exceed 10 km / h. Cruising range - 800 km. The armored personnel carrier has amphibious properties; it moves on water with the help of two propellers and wheels. The maximum load capacity statements without loss of buoyancy are 4 tons. 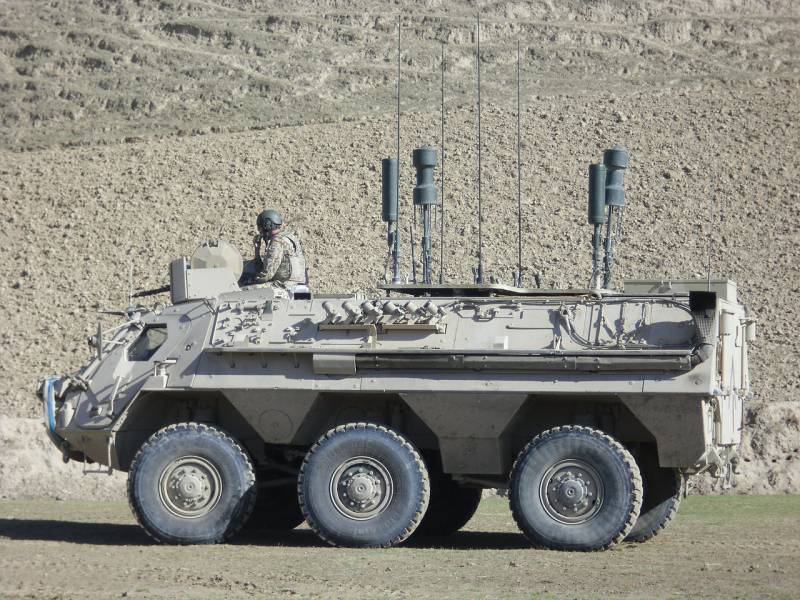 Version with additional armor and a landmine suppression system
During the modernization, the combat mass of the armored personnel carrier grew. For example, the TPz 1A7 version, which received additional mounted MEXAS-type ceramic armor, anti-fragmentation lining and improved mine protection, including the jamming system for protection against radio-controlled landmines, “recovered” up to 19 tons. Similar armored vehicles were actively used by the Bundeswehr in international missions, including in Afghanistan.

Like all armored vehicles with a wheelbase, the TPz 1 Fuchs armored personnel carrier has excellent mobility and mobility. The 6x6 wheel arrangement and an impressive ground clearance of 400 mm provide the Fox with good cross-country ability. Three-axle chassis with a uniform arrangement of wheels on the base is the hallmark of the machine. A similar scheme was often used by European manufacturers of wheeled armored vehicles. Two front axles are steered, the total radius of the BTR turning is 17 meters. In combat conditions, an armored personnel carrier uses special bulletproof tires with a built-in internal metal deformation limiter, the diameter of which is less than the diameter of the tire itself. Such a device allows for a long time to move at a reduced speed even with seriously damaged tires. 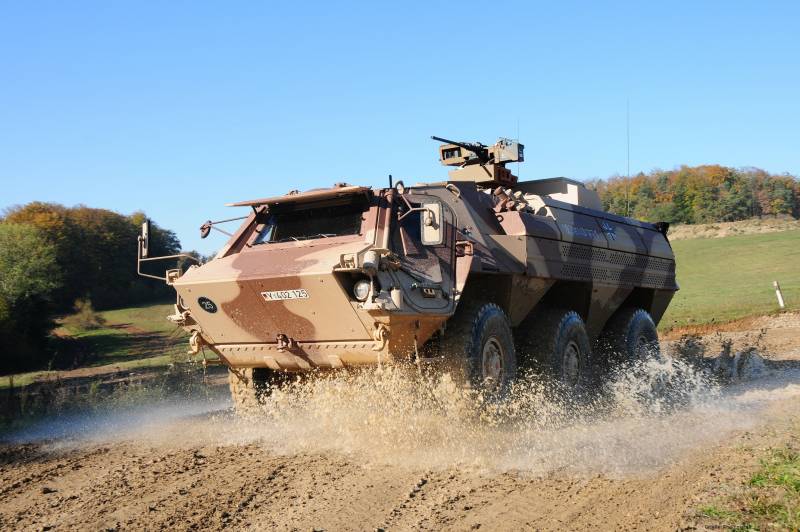 The most modern option. BTR TPz 1A8 Fuchs
The armament of the machine is represented by a different combination of machine guns: from one 7,62 mm MG-3 machine gun to three such machine guns. On machines with anti-tank systems Milan, maximum two machine guns were installed. In order to defend themselves, 6 smoke grenade launchers mounted on the sides of the hull are also used. After upgrading to the TPz 1A8 version (a total of 267 combat vehicles remaining in the Bundeswehr’s service is planned to be re-equipped), Rheinmetall installs a remote-controlled weapon module FLW 200 with a 12,7-mm M2HB machine gun in the armored personnel carrier.

The armored personnel carrier developed in the 1970s continues to serve in the Bundeswehr in 2020, as well as in the armies of other states: Algeria, the UAE, Saudi Arabia, Venezuela. After the upgrades, which seriously increased the security of the crew and the landing, including from detonation by mines and improvised explosive devices, the APC still remains relevant.