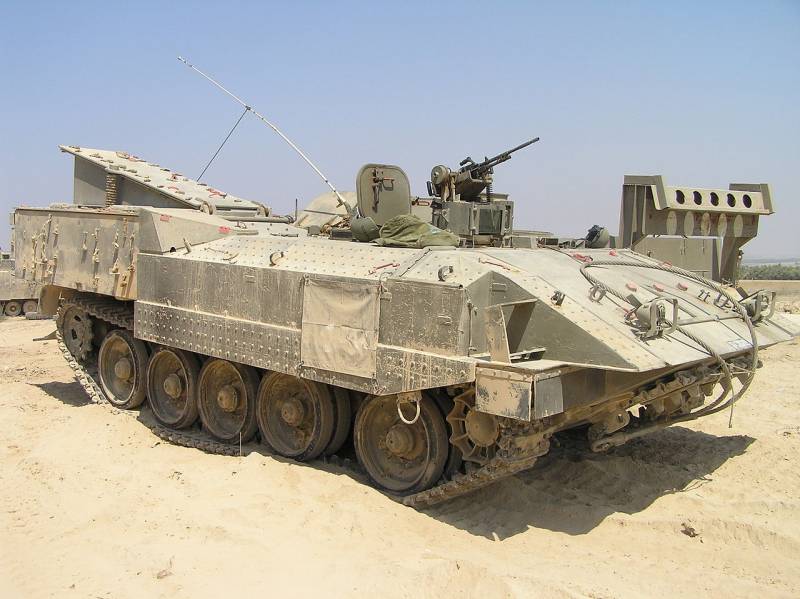 Combat buses. The idea of ​​creating an armored personnel carrier based on tank not new. The first such machines were created during the Second World War. Great Britain and Canada created improvised armored personnel carriers using Sexton self-propelled guns, Ram and Sherman tanks as chassis. In the 1980s, the Israeli military returned to a similar idea, but at a new technical level. They created their armored personnel carrier with tank armor on the basis of numerous captured tanks T-54 and T-55, which were captured as trophies from various Arab states.

The Israeli military turned to the idea of ​​creating a heavily armored tracked armored personnel carrier in the early 1980s, largely based on the experience of the 1982 Lebanon War. During the armed conflict, according to official figures, Israel lost up to 185 armored personnel carriers, which at that time were mainly represented by American M113. During the conflict, it became apparent that this military equipment does not provide the landing party with an adequate level of protection.

Given the specifics of the region, when the enemy of the Israeli army had a large number of large-caliber rifle weapons - 12,7 and 14,5 mm machine guns, anti-tank hand grenade launchers and anti-tank systems mainly of Soviet manufacture, it became clear that the military needed a heavy armored personnel carrier with adequate armor. The fact that Israelis often had to operate in cities and urban agglomerations, where military equipment became even more vulnerable, also played a role. 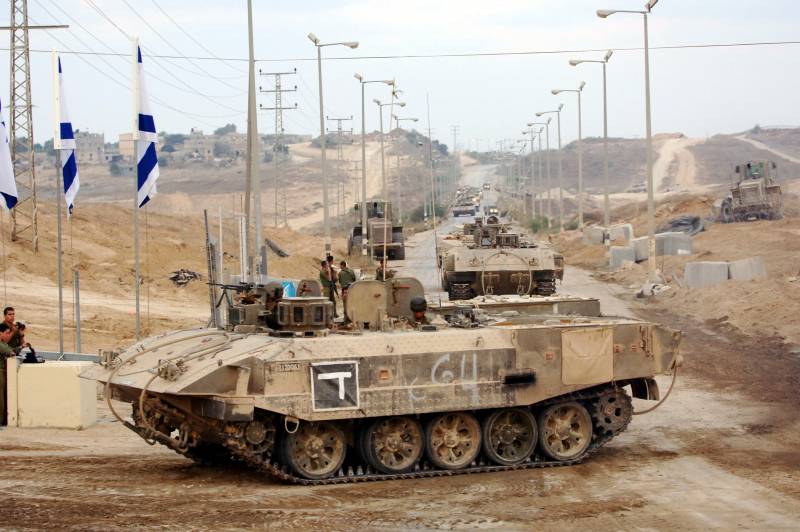 Also important was the fact that in the battles during the Lebanon war the Merkava tank proved to be excellent. The tank, which has an unusual layout, could in some cases be used as an impromptu armored personnel carrier. In the rear of the Israeli tank’s hull there was a compartment for placing racks of additional ammunition or reserve crew, and here it was also possible to place up to 6 paratroopers or 4 wounded on a stretcher. In the fighting, many unnecessary items were loaded from many tanks, and they were used as heavy armored personnel carriers, which proved their good defense in combat conditions.

Summing up the combat experience accumulated by the early 1980s, the Israeli military ordered the industry a heavy tracked armored personnel carrier with powerful armor that could operate in urban areas, and also be used in conjunction with the Israeli Merkava main battle tank. The Israeli military and designers approached the issue of creating the necessary APCs with a fair amount of pragmatism. An armored personnel carrier was decided to be made on the basis of numerous Soviet-made T-54 and T-55 tanks, which were captured by Israel from the Arab states as trophies. Such military equipment was stored by the Israeli army and was waiting in the wings.

The main emphasis when creating new armored vehicles was placed on the maximum protection of the crew and landing. This was consistent with the entire concept of the Israeli army, according to which the life of a soldier is more important than the safety of military equipment. The first prototypes of the future heavy tracked armored personnel carrier were ready by 1987. The machine completely suited the Israeli military and already in 1988 was launched into serial production. In total, 54 to 55 vehicles were converted into armored personnel carriers from T-400 and T-500 tanks. Currently, it is Israel that is the main operator of heavy armored personnel carriers in the world, including the BTR "Namer" with a combat weight of 60 tons, built on the basis of the Merkava tanks.

All Akhzarit armored personnel carriers were built on the basis of the chassis and hull of the Soviet main battle tanks T-54 and T-55 with a tower dismantled during the conversion. The use of a tank corps with anti-shell armor, which was further enhanced, provides excellent protection to the crew and the landing of the combat vehicle. The crew consists of three people, landing - 7 people. 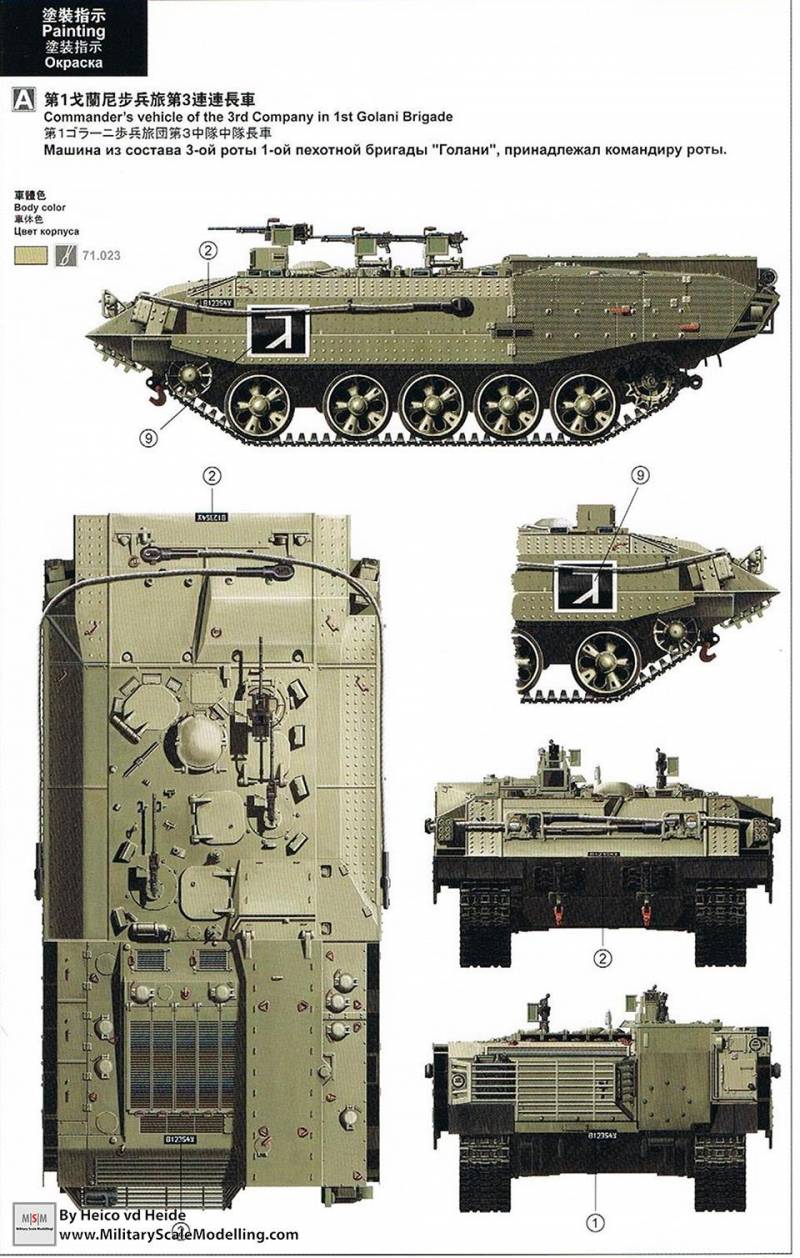 When remaking tanks in armored personnel carriers, the Israelis replaced Soviet engines and transmissions with American-made products. The first versions of the armored personnel carriers appeared more powerful and compact American 8-cylinder V-shaped diesel engines Detroit Diesel 8V-71 TTA with a capacity of 650 hp The engine is mated to an Allison hydromechanical transmission. At the same time, the specific power was small - less than 15 hp. one tone. In the future, when upgrading to the “Ahzarit-2” level, the engine was replaced with a more powerful Detroit Diesel 8 V-92TA / DDC III, which developed 850 hp. With a similar engine, power density increased to 19,31 hp. per ton, which is almost equal to the specific power of the Merkava-3 tanks. The maximum speed of the Akhzarit armored personnel carrier is 65 km / h, the range is up to 600 kilometers.

Significant changes were made to the body of the combat vehicle. Recycling was associated with a change in layout and the addition of a full landing squad. In the front of the hull there is a compartment for crew members, all of them are sitting face in the direction of the fighting vehicle. On the left side is the place of the driver, in the center - the commander of the armored personnel carrier, on the right - the arrow. Each of them has its own hatch to get out of the armored personnel carrier. Also in the roof of the hull there are two hatches for possible landing. Initially, there were seven, according to the number of foot soldiers transported, but later the number of hatches was reduced to two, since each additional hatch reduced the level of reservation of the roof of the hull.

Places of paratroopers are located directly behind the crew seats in the middle part of the APC. Three marines are placed on a bench on the left side of the compartment, another three on the folding seats on the right side, and one also on the folding seat in the center of the aft compartment. At the rear of the armored personnel carrier, the designers installed a power plant. Due to the compact size and lateral arrangement, it was possible to save space for a through passage from the fighting compartment to the right side of the stern of the hull. Thanks to this, the landing is carried out through the aft reclining ramp in the most safe way for motorized rifles. At the same time, a unique technical solution was used in the design of the aft BTR door. To facilitate and accelerate the process of disembarking motorized rifles, a part of the roof above the exit is raised by a hydraulic actuator, increasing the height of the opening. 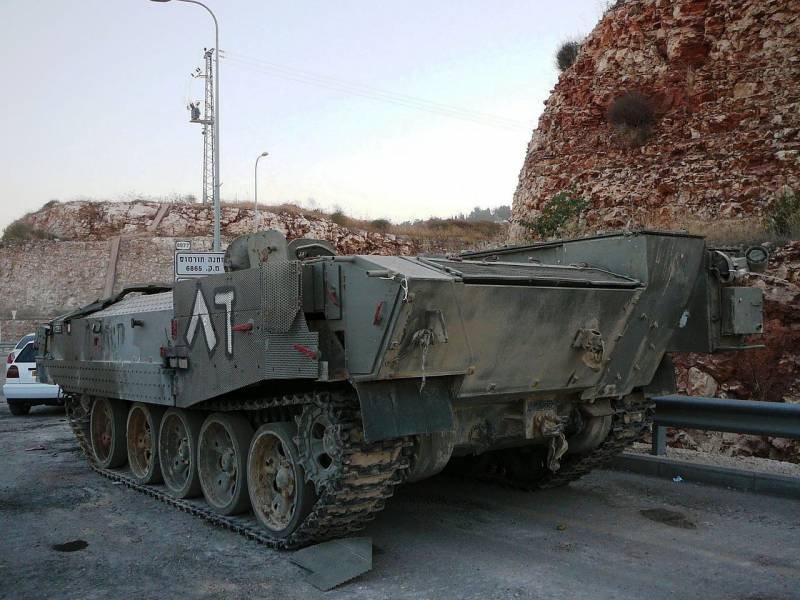 When creating a heavy tracked armored personnel carrier, the Israelis paid special attention to the safety of the crew and the landing, which was protected from all sides: the hull sides, feed, roof and bottom are well-armored, and the frontal armor of the hull reaches 200 mm. It is worth noting that the designers significantly strengthened the existing Soviet booking. Without a tower, the tank weighed about 27 tons, but the combat mass of the resulting armored personnel carrier is 44 tons. Almost all of the "excess weight" gained during the work falls on the reservation placed by the Israelis additionally.

The largest amount of additional reservation is concentrated around the fighting compartment and protects personnel. At the same time, the principle of protecting the more important units of the combat vehicle with less important ones was used in the design of the armored personnel carrier. On the sides of the fighting compartment, designers arranged fuel tanks, which play the role of additional protection for the crew and the landing force. The aft part of the armored personnel carrier is also covered by perforated armor plates made of high-strength steel. By car, dynamic protection kits and a modern automatic fire extinguishing system appeared. Additional protection is provided by the low silhouette of the combat vehicle - the height of the armored personnel carrier is about 2000 mm. This allows you to easily hide in the folds of the terrain and behind the bush.

The main armament of the heavy Israeli armored personnel carrier is the usual FN MAG 7,62-mm machine gun aka M-240, located on the OWS (Overhead Weapon System) turret, which Rafael was responsible for developing. The machine gun turret has a remote control, which significantly reduces the risk of damage to the crew during its use. On some machines, as part of the modernization, the Israelis installed Samson remote-controlled installations with a large 12,7-mm machine gun. A special thermo-smoke equipment was also placed on the BTR, which creates a smoke screen by injecting fuel into the exhaust manifold. It is also possible to install standard smoke grenade launcher blocks. 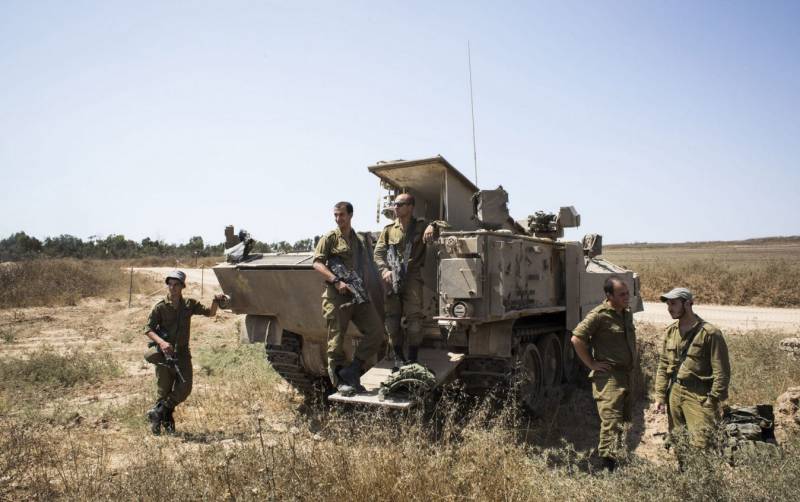 Experts rightly consider the Israeli tracked armored personnel carrier "Ahzarit" one of the most protected in its class. Not a single armored personnel carrier of other countries can boast of such a level of armor protection. It is worth noting that, according to various estimates, from 14 to 17 tons of APC weight falls solely on additional booking, including using composite armor. The Israeli military claims that the APC is able to survive not only the hit of RPGs, various cumulative ammunition, but also armor-piercing shells. According to them, “Ahzarit” can withstand several hits of 125-mm armor-piercing feathered sub-caliber shells when hit in the frontal projection. No APC in the world can boast of such a level of protection.

Due to the high level of protection, the Akhzarit armored personnel carrier can be used on the battlefield together with the main battle tanks, acting practically in their order. Also, this technique feels good in urban areas and can be used for assault actions.

Some experts attribute to the shortcomings of the armored personnel carrier a large combat weight of 44 tons, but this is an objective necessity, due to the terms of reference and the requirements of the military. Also sometimes the disadvantages include the part of the roof raised during landing, which can tell the enemy that the landing is preparing or is already leaving the combat vehicle. 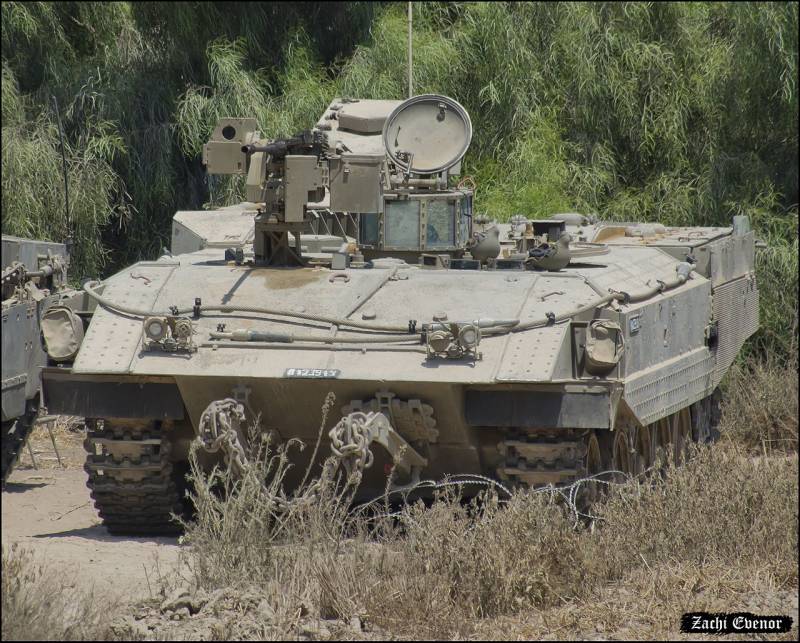 In general, it is worth recognizing that the "Ahzarit" is a unique modern armored personnel carrier, which is characterized by very good protection of the crew and landing. The creation of this armored personnel carrier is dictated by the rich combat experience of the Israel Defense Forces and demonstrates the pragmatism of the approach of the Israeli military, which turned hundreds of obsolete captured tanks into a machine that is still in service.