The main armored personnel carrier of the Wehrmacht. Sd.Kfz. 251 Ganomage 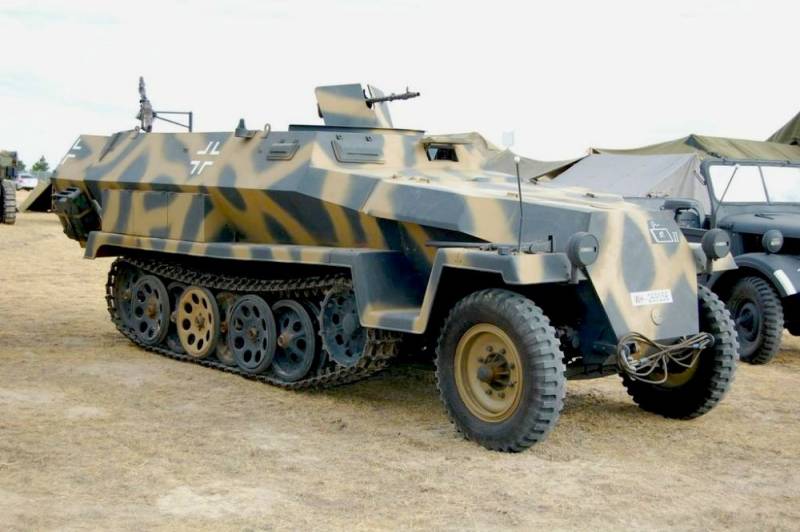 В history German half-track armored personnel carrier Sd.Kfz. 251 also entered under the name "Hanomag", by the name of the manufacturing company: Hanomag Engineering Plant from Hanover. In total, during the years of World War II, more than 15 of thousands of similar armored personnel carriers in various versions managed to be released in Germany. The successful chassis was actively used to create various combat vehicles, including ambulances, artillery reconnaissance vehicles, mobile command posts, and also as a carrier of various weapons: from anti-aircraft automatic guns to 75-mm anti-tank guns. At the same time, the main purpose of the Ganomag armored personnel carrier throughout the war was to transport motorized infantry (panzergrenadiers). Armored personnel carriers showed themselves especially well on the Eastern Front and in North Africa, since, thanks to the semi-tracked mover, they had good cross-country ability and could operate in off-road conditions.

The appearance in the German army of a full-fledged armored personnel carrier by the beginning of World War II is inextricably linked with the appearance in Germany of half-track artillery tractors. The creation of half-tracked vehicles in Germany worked during the First World War. Work in this direction led to the fact that in the 1930-e years Germany firmly held the palm of the lead in the production of vehicles for various purposes on wheeled and tracked tracks. This development of industry ideally fell on the doctrine of the German military, who understood that the future war would be a war of machines and deep offensive operations. Such a strategy required the availability of specialized vehicles, which were numerous wheeled-tracked conveyors, which provided greater mobility for the Wehrmacht artillery. It was the wheeled and tracked tractors that became the shadow trump card of the German army in the first half of World War II, providing the Nazi troops with a serious advantage over the armies of opposing states.

The semi-crawler tractors created in Germany were also an ideal chassis for creating various specialized equipment, including machines such as ARVs that could even be used for evacuation tanks from the battlefield. Sooner or later, the idea of ​​creating an armored personnel carrier on such a chassis should have been born in the minds of the German military, it was only a matter of time. An armored personnel carrier with an armored caterpillar chassis was much preferable to conventional wheeled trucks, which in the conditions of modern warfare were extremely unreliable vehicles, they did not provide the crew with protection from enemy fire, had no weapons, had insufficient cross-country ability and could be withdrawn out of action even fire from a small weapons. 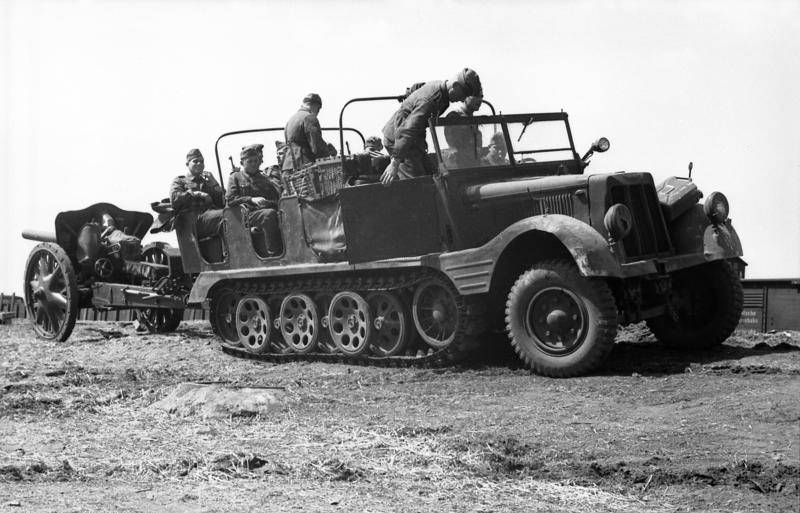 Already in 1933, the German company Hansa-Lloyd-Goliath developed the lightweight 3-ton half-track artillery tractor. Serial production of the machine under the designation HLkl 5 began in the year 1936. At the same time, the company could not cope with the mass production of such equipment and could not satisfy the ever-increasing demands of the Wehrmacht, until the end of the year Hansa-Lloyd-Goliath released 505 of such artillery tractors. In 1938, this company changed its owner and received the new name Borgward. At the same time period, the company began assembling the upgraded 3-x HLkl 6 artillery tractors equipped with the new Maybach HL38 90 horsepower engine. This time, soberly assessing the production capabilities of the Bogvard company, the leadership of the armed forces immediately chose the second manufacturer of these tractors - the Ganomag company from Hanover. The latter presented its version of the Hkl 6 half-track tractor, which was practically no different from the Bogward model.

This artillery tractor was adopted by the Wehrmacht under the designation Sd.Kfz. 11 is an abbreviation for Sonderkraftfahrzeug 11, where "Sonderkraftfahrzeug" stands for "special vehicle" and Arabic numerals indicate the model of the car. Artillery half-track tractor Sd.Kfz. 11 was mass-produced in Germany from 1938 to 1945 a year, during which time more than 9 thousand machines of this type were assembled. The tractor could carry up to 8 fighters, a load of 1550 kg in the back of the truck and tow a trailer weighing up to 3-x tons. In the Wehrmacht, this half-track conveyor was often used as a standard means for towing the light 10,5-cm field howitzers leFH 18. 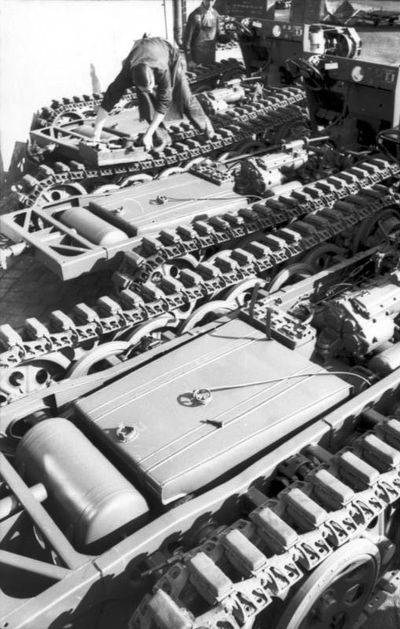 Chassis Sd.Kfz. 11 at the factory

The armored housing on the first models was riveted, later it became completely welded. It was assembled from rolled armor plates located at rational angles of inclination. The thickness of the armor ranged from 15 mm in the front of the hull to 8 mm on the sides and in the stern of the combat vehicle. Additional protection from the sides could be boxes with spare parts and various equipment. The case was open, the car didn’t have a roof, in case of bad weather, it was easy to pull on a canvas canvas from above. Landing and landing were carried out from the stern of the hull, where a double-leaf door was placed. Thus, leaving the combat vehicle, panzergrenadiers were covered from frontal fire by the body of the fighting vehicle. There were no loopholes for firing on the sides of the hull, but if necessary, soldiers could fire from personal weapons on top of the sides. The standard armament of the armored personnel carriers was one, in some cases two single 7,92-mm machine guns MG34 or later MG42. The front was mounted on the roof of the control compartment and was covered by an armored shield. The rear machine gun was mounted on a swivel, which was attached to the rear armor plate, this machine gun could be used to fire at air targets.

The chassis of the armored personnel carrier was similar to the Sd.Kfz.11 artillery tractor. The armored personnel carrier received a half-track chassis with a staggered arrangement of track rollers, while the front wheels of the combat vehicle were steered, and the presence of tracks significantly increased cross-country cross-country ability. The control of the armored personnel carrier was carried out by turning the steering wheel of an automobile type. When turning at a small angle (in different sources from 6 to 15 degrees), the rotation was carried out only through the use of the front wheels. For a steeper turn, the driver used the tracks when one of them braked and the other transmitted up to 100 percent of engine power. 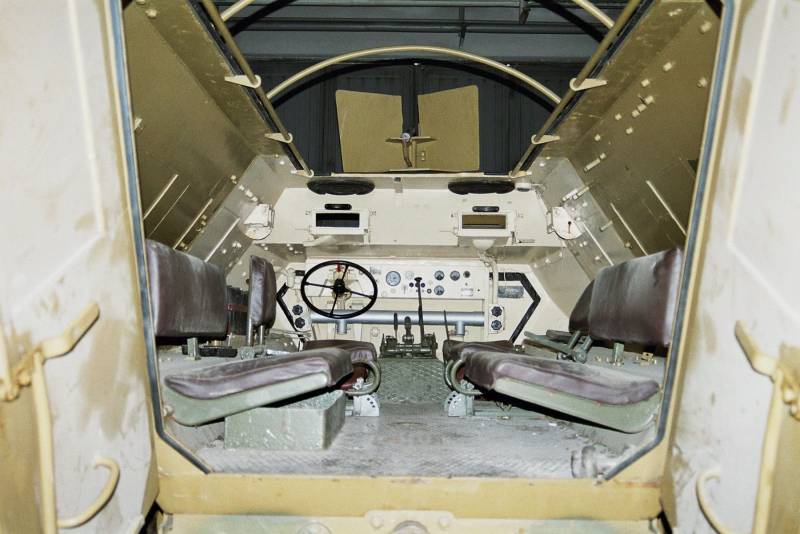 The heart of the Sd.Kfz.251 armored personnel carrier was the Maybach HL 42 TURKM six-cylinder liquid-cooled carburetor engine. This engine with a displacement of just over 4,1 liters provided maximum 100 horsepower. at 2800 rpm. Engine power was enough to disperse an armored personnel carrier, whose combat mass reached 9,5 tons, to 53 km / h when driving on the highway. Cruising on the highway was estimated at 300 km. In addition, the half-track mover in a pair with the specified motor provided the machine with the ability to overcome climbs up to 24 degrees, overcome ditches up to two meters wide and fords up to half a meter without any preparation.

All German Sd Kfz armored personnel carriers. 251 were mass-produced in four major Ausf versions. A, B, C and D and in 23 various specialized versions, which could differ from each other not only by the availability of special equipment, but also by the composition of weapons. The most massive of all was the Ausf modification. D, such vehicles were produced by 10 602, armored personnel carriers of the three previous modifications - 4650. The most common was the Sd.Kfz.251 / 1 model, which in fact was a full-fledged armored personnel carrier, designed to transport a full infantry squad (10 people). For example, other variants of the machine were designated as Sd.Kfz. 251 / 3 (communication machine, characterized by the presence of mast, whip or loop antennas and various radio stations) or Sd.Kfz. 251 / 16 released in the amount of several hundred flamethrower version with two MG34 machine guns and two 14-mm flamethrowers with a range of flamethrowing up to 35 meters. 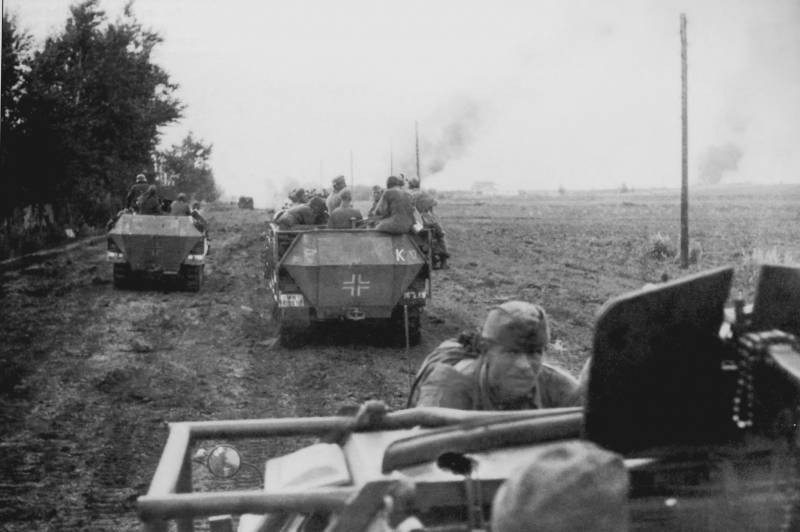 The first production Sd.Kfz. 251 entered service with units of the Wehrmacht in the summer of 1939, the Polish campaign became their debut on the battlefield for these combat vehicles. The first new equipment was received by the elite 1-I tank division. Already in the second half of the 1939 year in Germany, they began assembling the modification Sd.Kfz.251 Ausf.B. The main difference from the Ausf.A modification was the absence of viewing slots for paratroopers on the sides of the hull (on the Ausf.A modification, such slots were covered with bulletproof glass). In addition, the radio antenna moved from the wing of an armored personnel carrier to the side of the fighting compartment. Another notable difference was the appearance of an armored shield, which covered the front unified 7,92-mm MG34 machine gun. The appearance of an armored shield is a generalization of the experience of real combat use of armored personnel carriers in Poland. Also, the model was distinguished by the appearance of armored air intakes. This modification of the BTR was mass-produced until the end of the 1940 year.

The next mass modification was Sd.Kfz.251 Ausf.S. Compared with the two previous versions of the BTR, the new car could boast a large number of changes that seem to remain invisible. All changes were aimed at simplifying the technology of producing an armored personnel carrier, and real experience in combat use was also taken into account. A noticeable difference of this modification was the changed front of the case. A direct monolithic armor plate appeared at the front, placed at a rational angle of inclination, such a plate better protected the power compartment of the machine. On the wings of the armored personnel carrier appeared separate boxes for the transport of spare parts and various military equipment, sapper tools moved further to the stern of the car. Ausf.C modification armored personnel carriers were produced up to the 1943 of the year. 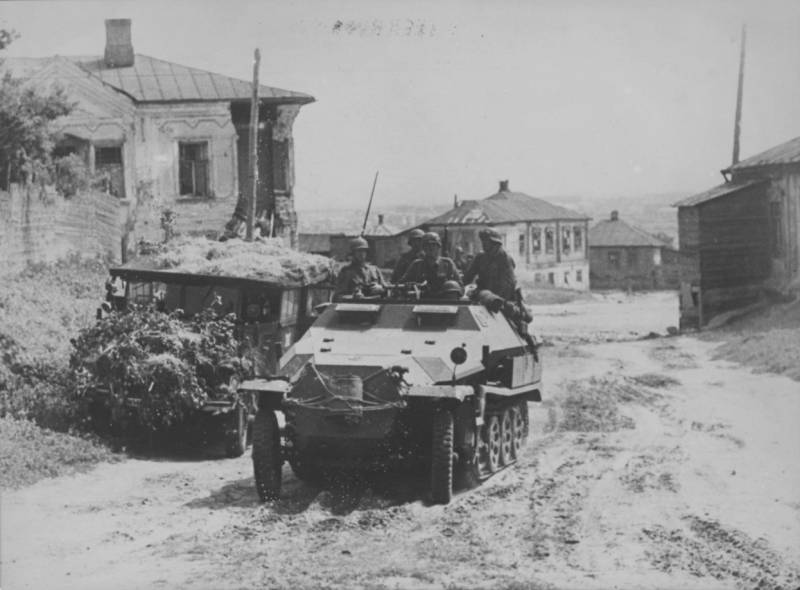 Armored personnel carrier Sd.Kfz. 251 Ausf. C on one of the streets of Voronezh, 1942 year, photo: waralbum.ru

In the same 1943 year, the last and most massive modification of Ausf.D appeared. By this time, the production of armored personnel carriers in Nazi Germany had reached its peak. In 1943, German industry launched the 4258 armored personnel carrier, and in 1944, 7785. The main feature of the new Sd.Kfz.251 Ausf.D armored personnel carrier was a modified form of the hull and sides of the airborne squad. On this model, the spare parts boxes were integrated into the sides of the hull, and the aft part received a simpler form in production, now it was a single direct part mounted at an angle. The main difference between this version was that the case became welded and more technological, the Germans completely abandoned the use of riveting. On the first three models, the landing sites along the sides of the hull were covered with dermatin, on the Ausf.D modification it was replaced with a simple tarp, and there were also options with wooden benches. All the technical simplifications of the model were aimed at increasing the production of armored personnel carriers in wartime conditions.