October 22 2019
24
"Combat buses." Before the start of World War II, Sweden favorably stood out among all Scandinavian countries with a developed industry, which made it possible to create very complex military products, including Tanks. It is not surprising that, using its neutral status, the country continued to work on the creation of its own armored vehicles during the Second World War. In particular, it was in Sweden that the first armored personnel carrier was created in Scandinavia. The car was quite simple, but proved to be very practical and actively served in the Swedish armed forces until the early 1980s. 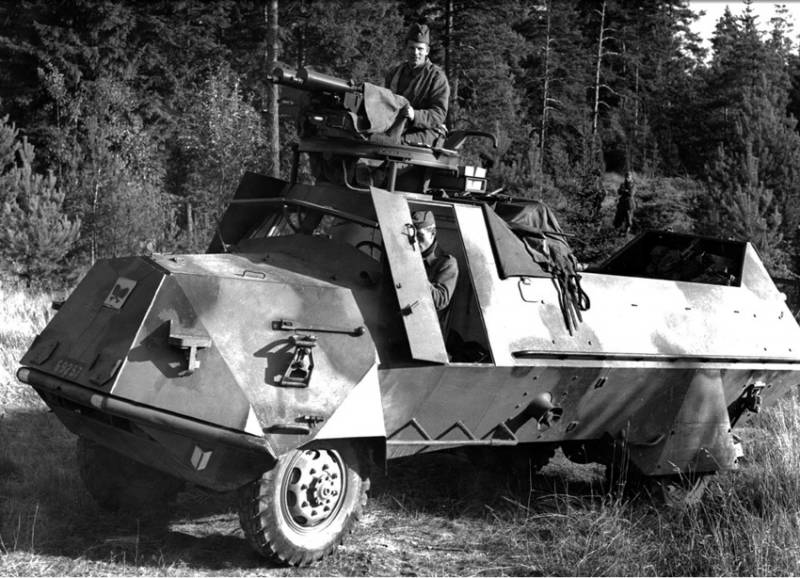 On the way to the first Swedish armored personnel carrier

Terrangbil m / 42 KP became the first armored personnel carrier of the Swedish army and the first such combat vehicle in Scandinavia. At the same time, the Swedish engineers approached the problem as simply as possible, using Volvo TLV 141 and Scania-Vabis F10 truck chassis to create their APCs. With a developed automotive industry and companies such as Volvo and Scania that do not give up their positions in the automotive market in the 21st century, such a move was predictable. 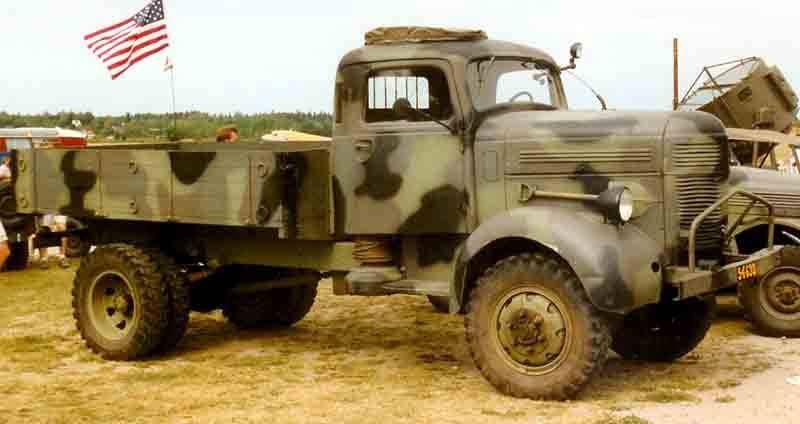 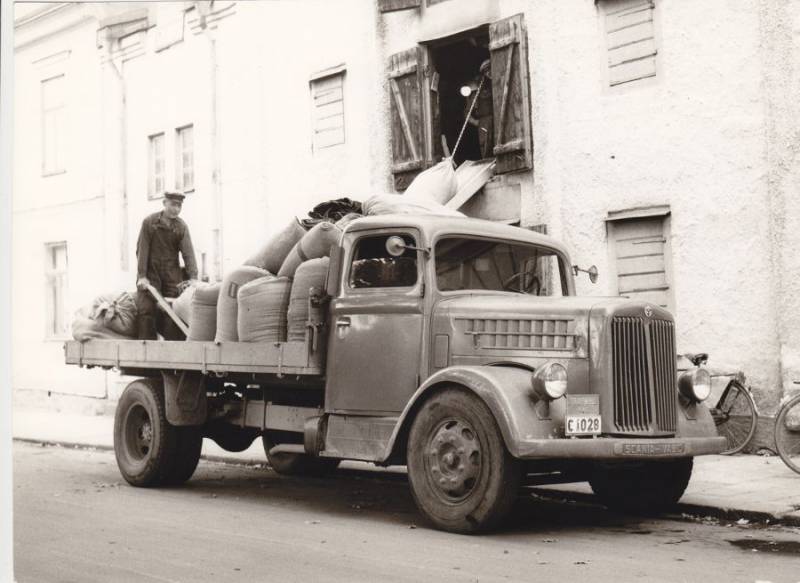 The Volvo TLV 141 was a truly successful truck, one of the best for its time and, importantly, with the 4x4 wheel formula. During the Second World War, Volvo produced a whole gamut of three-ton bonnet-mounted trucks specifically for the needs of the armed forces. These were all-wheel drive models TLV131, TLV140, TLV141 and TLV142. Each such truck was equipped with a powerful gasoline engine delivering 90-105 hp. (For comparison, the famous Soviet three-ton ZIS-5 was equipped with 66-73 hp engines). In total, until 1949, the Swedes produced about a thousand of these cars.

But to produce trucks, staff buses and special equipment based on them is one thing, and armored personnel carriers are completely different. For example, the Soviet Union, which historian Aleksei Isaev rightly calls the "great truck power," neither before the war nor during the war created his own armored personnel carrier. Sweden, which remained neutral, was able to digest the experience of military campaigns in Europe in a calm atmosphere and study the tactics of German troops. In the new conditions of the war, the Germans increasingly used specialized armored personnel carriers - the famous half-tracked Sd. Kfz.251, gained fame in our country by the name of the manufacturer's company "Ganomag". 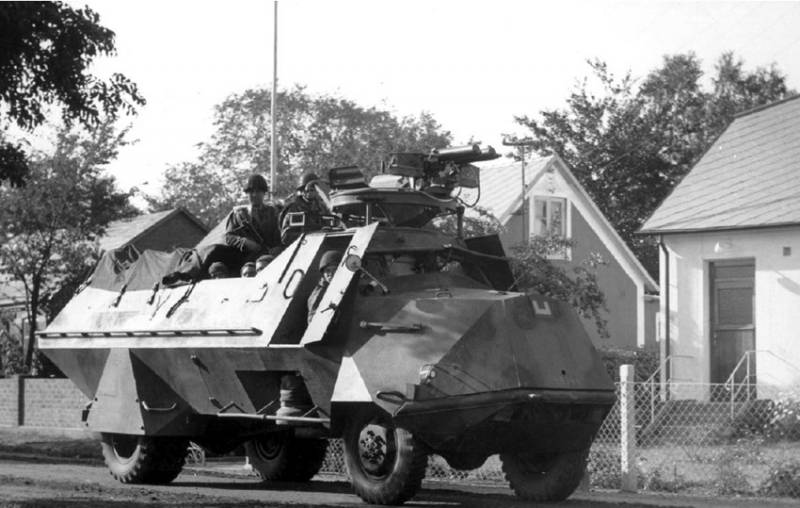 The use of armored personnel carriers helped motorized infantry to follow the tanks, confidently overcoming the obstructive artillery fire of the enemy. Reservation of new combat vehicles protected the landing from fragments of shells and mines, as well as small arms fire weapons, significantly increasing the combat capabilities of the advancing tank groups. As you know, the capture and retention of the territory is provided not by tanks, but by infantry. Therefore, the more infantry can follow the tanks, the better. Given the German experience in using armored personnel carriers, the Swedish military decided to get a similar car. At the same time, in the context of the great war, which had already swept all over Europe, the Swedes could not count on the acquisition of armored personnel carriers from other countries, it was necessary to create their own car. Work on the creation of his armored personnel carrier began in Sweden in the 1941 year. 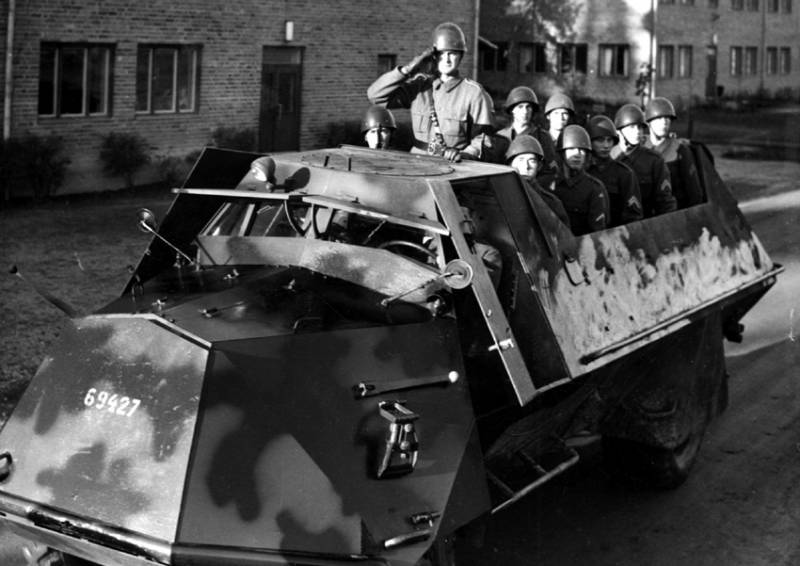 Swedish designers created an armored personnel carrier of a classic layout with a front engine and control compartment, behind which was an airborne compartment. At the same time, the chassis of the truck with the wheel formula 4x4 was left unchanged. The car also used front gable wheels and rear gable. On top of the chassis was a welded armored hull of the original form with a rational arrangement of armored plates and gable sides. The location of the armored plates produced by Bofors and Landsverk resembled the corps of the most famous German armored personnel carrier in stories - Sd. Kfz.251, but the Swedes did not have their own half-track chassis. Moreover, such a chassis would be much better suited for the conditions of Sweden. In the future, the Swedes themselves noted the insufficient patency of the chassis of a conventional, albeit four-wheel drive, truck. Managed to increase throughput only through the use of chains.

At the same time, the first Swedish armored personnel carrier could not boast of serious armor protection. The frontal part of the car body had maximum armor with a thickness of 20 mm, the sides and the feed of the body had 8 mm. An armored personnel carrier received an airborne compartment open from above; there was no roof. With precipitation in the form of rain or snow, it was possible to pull a tarp from above, which was part of the laying of the combat vehicle. The crew of the first armored personnel carrier in Scandinavia consisted of two people - a driver and a commander, later a shooter was also added to them. The airborne squad allowed transporting up to 16 fully equipped fighters who were sitting on benches with their backs to each other, but usually there were much fewer of them - up to 10 people in the back. The paratroopers exited through the door in the rear of the hull; in an emergency, the soldiers could leave the car simply by crossing overboard. For the characteristic shape of the corps, Swedish soldiers quickly nicknamed the new armored personnel carriers "coffins." 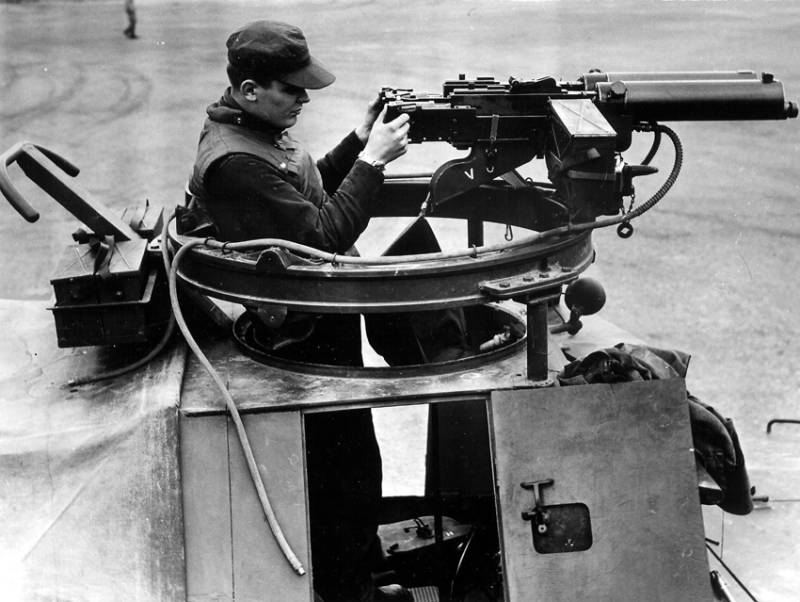 The heart of the armored personnel carriers were Scania-Vabis 4 402-cylinder engines with 115 horsepower. at 2300 revolutions per minute, or 6-cylinder Volvo FET with 105 hp at 2500 rpm. The engine power was enough to accelerate a vehicle with a combat weight of 8,5 tons and a length of almost 7 meters to a speed of 70 km / h, the cross-country vehicle could move at a speed of 35 km / h, but in practice such a speed was practically unattainable, and cross-country ability armored personnel carrier left much to be desired. 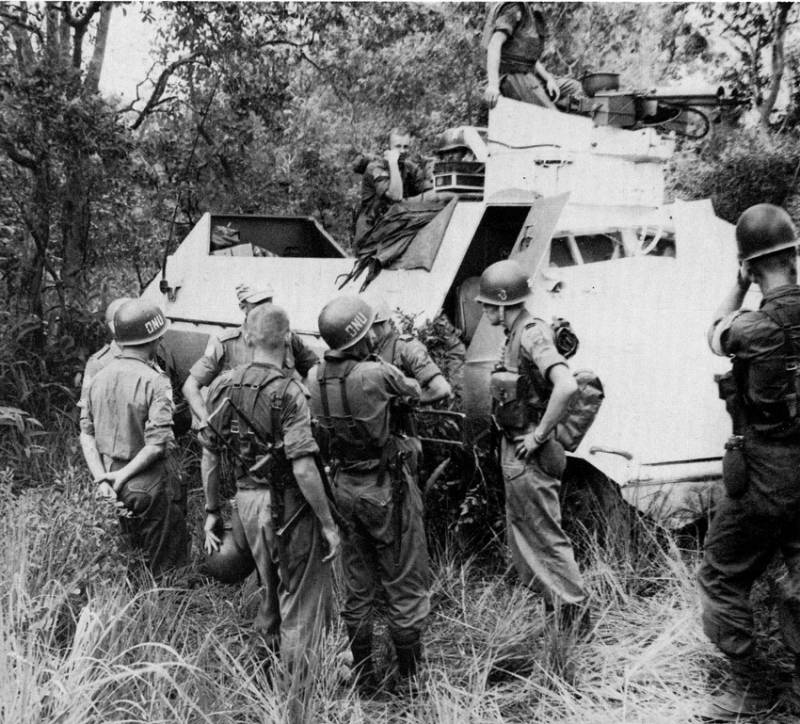 Already the first months of operation of new cars revealed their shortcomings, which included insufficient cross-country ability, problems with the transmission, which were considered not entirely successful, as well as poor visibility from the driver's seat. Later, weak reservations began to be attributed to shortcomings. Moreover, during operation, the armored personnel carriers were modernized several times, which allowed to extend the period of their active use until the beginning of the 1980-s. In particular, in later versions, archaic water-cooled machine guns were replaced with more advanced KsP 58 machine guns under the standard NATO cartridge 7,62x51 mm. Also, a full roof appeared over the landing squad, the armored personnel carrier became airtight, but now no more than 7 people were transported in the landing squad. 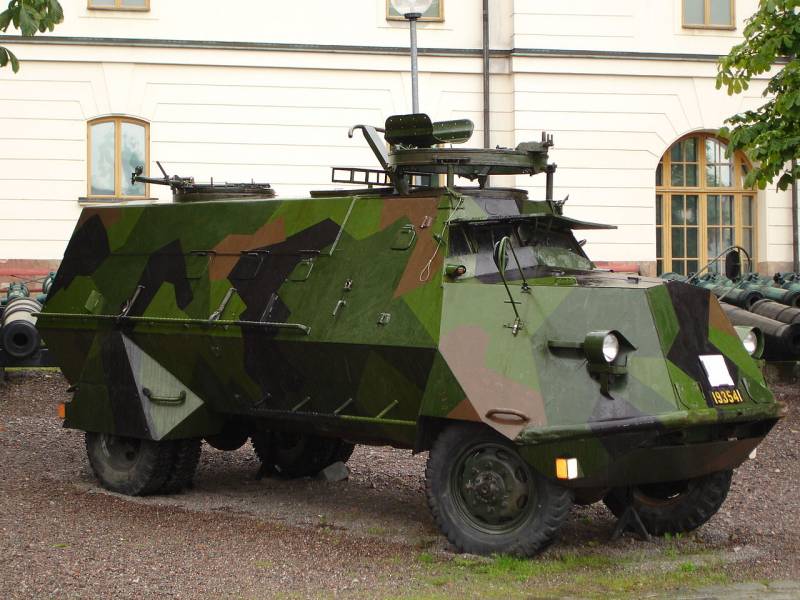 Ctrl Enter
Noticed oshЫbku Highlight text and press. Ctrl + Enter
We are
Family BTR-60 / 70 / 80 in combatIs the "old" well forgotten to become the "new"? Part-2. At the call of honor and duty
Military Reviewin Yandex News
Military Reviewin Google News
24 comments
Information
Dear reader, to leave comments on the publication, you must to register.