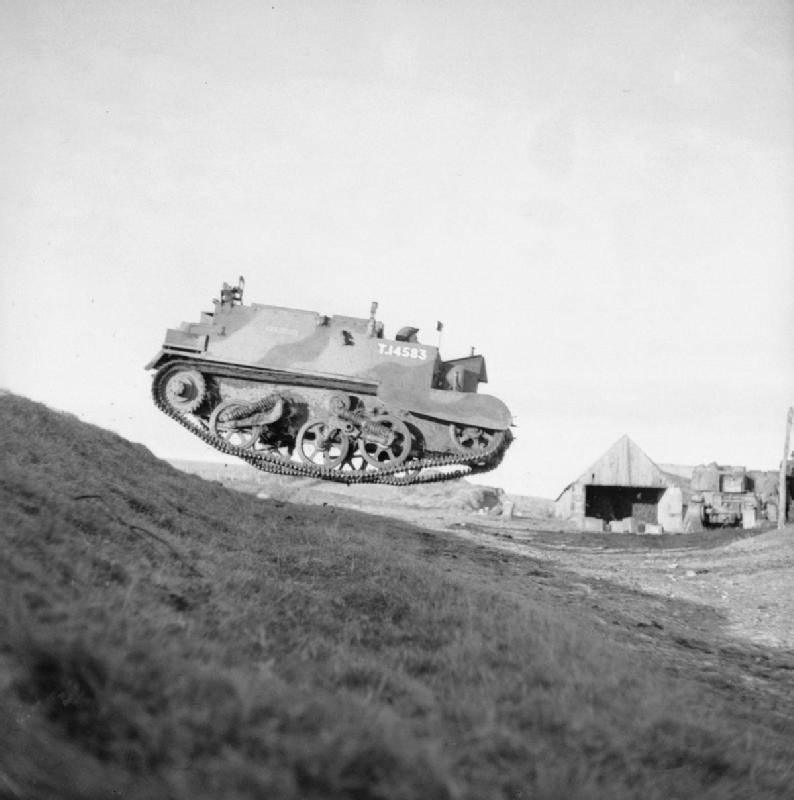 The most massive armored personnel carrier of the Second World War was developed on an initiative basis by engineers of the British company Vickers-Armstrong in 1934-1936 years. The new combat vehicle was a modernized and updated version of the Carden Loyd family of light English wedges, created back in the 1920 years, in particular the Vickers Carden-Loyd Mk.VI wedge, which was an infantry armored personnel carrier. Initially, the "Universal Transporter" was created as a carrier of various weapons, primarily machine-gun systems. At the same time, it’s clear from the name that the car was diverse. In addition to transporting machine guns and assault forces, an armored personnel carrier could be used to transport light field systems weapons together with the calculation. At different times, an reconnaissance version was created, an artillery observer machine, an artillery tractor for transporting mortars and light weapons, an ammunition transport vehicle. In addition, Universal Carrier was a carrier of various weapons, including flamethrowers and anti-tank rifles. 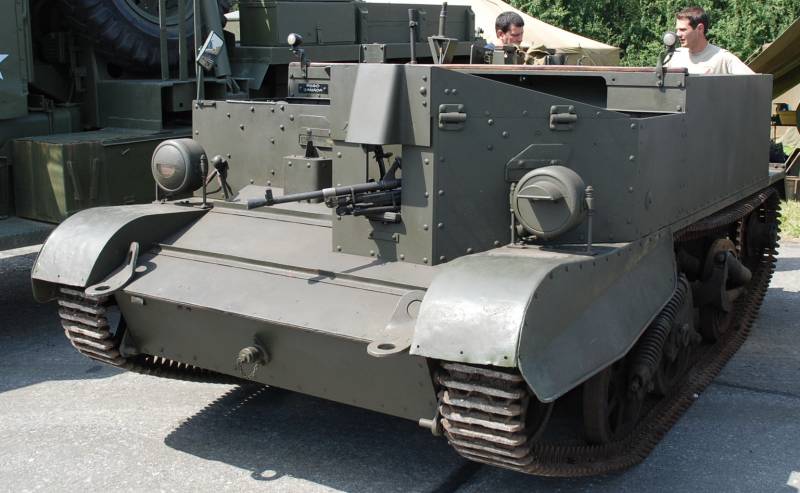 The British army purchased the first two vehicles already in the 1935 year, and from the 1936 year the mass production of armored vehicles of the early series began, which did not stop until the 1945 year, and the armored personnel carriers themselves were used until the beginning of the 1960 years. In addition to the UK, where they managed to collect about 57 of thousands of universal conveyors, they were massively assembled at enterprises in Canada (29 of thousands of cars) and Australia (5 of thousands of cars), and about 20 of thousands of conveyors were assembled at US enterprises. The American version was distinguished by an improved chassis, which received a second full-fledged wheeled trolley, as well as the installation of Ford's American engines of greater power.

Operation of vehicles in the troops led to changes in their design, so at the turn of the 1937-1938 years, Universal Carrier armored personnel carriers underwent a number of changes. A full-fledged public debut of the new armored vehicles took place in September 1938, when the first serial Universal Conveyors, armed with the 7,7-mm Bren machine gun, were presented to ordinary people and journalists during brigade exercises of the British army. As part of the exercises, the machines demonstrated good cross-country ability and high maneuverability. Caterpillar armored vehicles did not experience problems when used in rural areas, confidently overcoming dense thickets of shrubs, wattle and fences. More from such a technique was not required.

The number of armored personnel carriers issued indicates that the vehicle was simple and easy to manufacture, and also met the demands of the military, who received an combat vehicle that was easy to learn and operate, capable of solving a variety of tasks. A large number of armored vehicles in the framework of the Lend-Lease program fell into the Soviet Union. In total, the USSR received more than 2500 of such conveyors, of which 200 before the end of the 1941 of the year. In the Soviet Union, vehicles from December 1943 were re-equipped with domestic weapons. So the 7,7-mm machine gun “Bren” was replaced by the 7,62-mm machine gun DT, and the 13,9-mm anti-tank gun “Boyce” on the 14,5-mm anti-tank guns PTRD and PTRS. 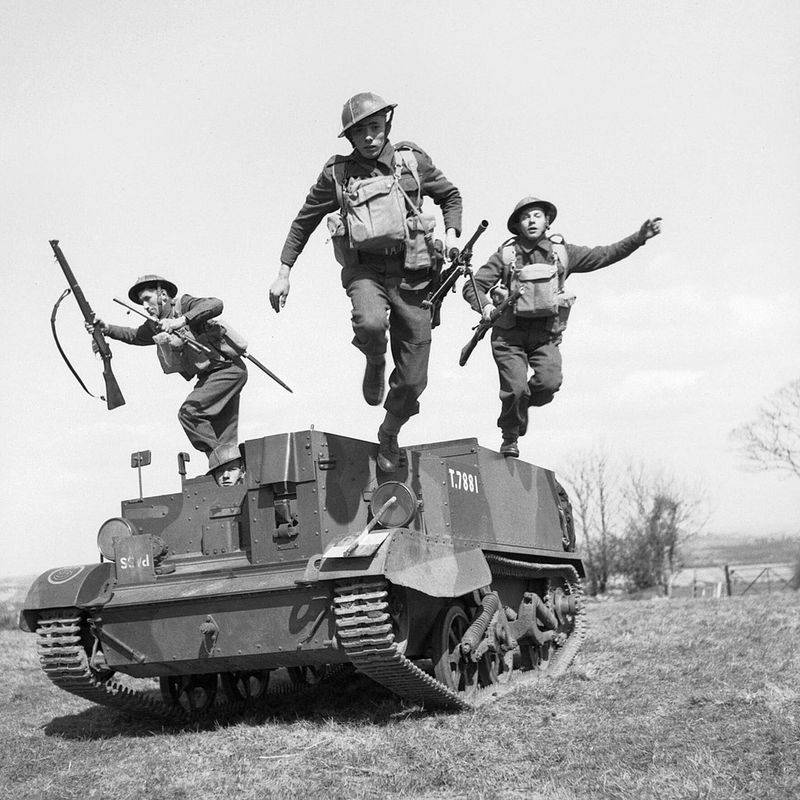 Like the light Carden Loyd wedges, the new British armored personnel carriers were distinguished by their recognizable low open, simple, rectangular hull. The main purpose of the armored vehicles was to transport the Bren and Vickers machine guns, but the military themselves quickly cooled off to this role the use of light armored vehicles, having found a lot of applications in the army for Universal Conveyors. The total combat weight of the vehicles did not exceed 3,8 tons. When creating armored vehicles, steel rolled armor plates were used, but their thickness was very small: 10 mm in the front of the hull and 7 mm on the sides and stern. We can say that the reservation was symbolic, protecting the car and crew from small fragments and non-armor-piercing rifle caliber bullets.

The length of the body of the Universal Carrier armored personnel carrier was 3,65 m, width - 2,06 m, height - 1,57 m, clearance - 203 mm. The machine was squat and easily hid in the folds of the terrain and behind bushes, which in some cases, especially when used as a reconnaissance vehicle, was an advantage. The heart of the armored car was the 8-cylinder gasoline liquid-cooled engine of 3,9 liter volume. The engine produced maximum power 85 hp at 3500 rpm. This was enough to accelerate the Universal Conveyor to 48 km / h when driving on the highway. Given the low power of the engine, it is quite a worthy indicator for tracked vehicles. Cruising range on the highway was estimated in 225-250 km. Due to the small specific pressure on the ground - approximately 0,45 km / cm2 - the armored personnel carrier was distinguished by good cross-country ability in different types of terrain. 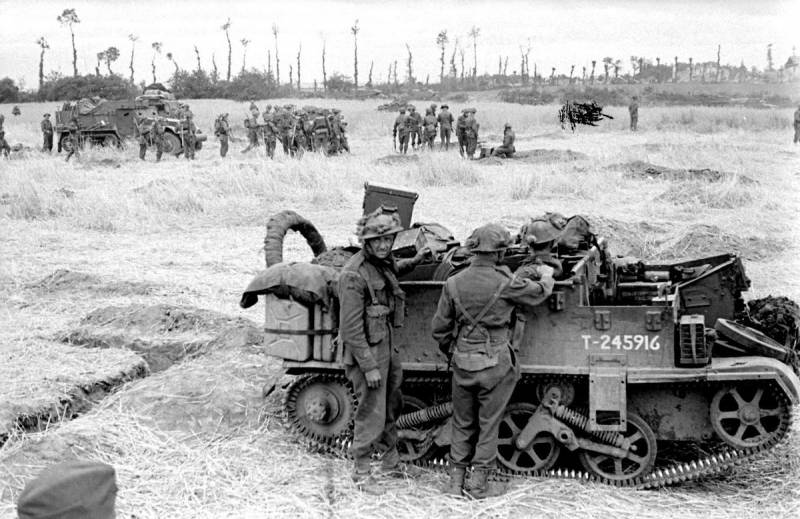 The chassis of all English cars, the most massive of which were Universal Carrier Mk I (II, III), consisted of three road wheels on each side, the first pair was combined into a trolley. The chassis and suspension were borrowed from the British Light Tank Mk.VI 1930's with minor modifications, which Vickers was also responsible for. The suspension of the armored personnel carrier also used spiral springs, and the suspension itself was known as Horstmann, by the name of the inventor Sidney Horstmann, who invented it back in the 1922 year. Later on the American versions of the conveyor, which received the designation T16, the chassis was improved, the composition of the track rollers was increased to four on board, which allowed the formation of two full-fledged carts.

An unusual feature of Universal Carrier was the location of the engine, which was located in the rear of the machine, the engine was installed along the central axis of the hull. There, in the power compartment, there was a five-speed gearbox and side clutches. In the front part of the building there was a control compartment, where a driver and a machine gunner or anti-tank gun operator were located, depending on the composition of the installed weapons. Behind the control compartment was an airborne or transport compartment, depending on the modification. Typically, Universal Carrier carried no more than three to five people. 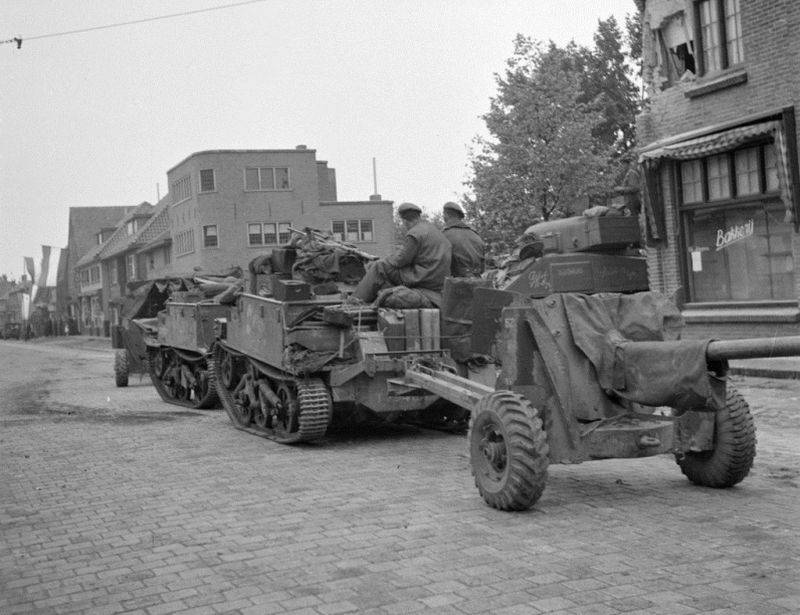 The location of the engine in the middle of the hull divided the landing compartment into two parts. The paratroopers sat with their backs to the sides of the armored personnel carrier, practically resting their feet on the engine, the upper part of which formed a kind of “countertop”. With a different arrangement of seats, the paratroopers rested on the engine protection with their side. Given the small dimensions of the Universal Carrier armored personnel carrier, the location of people in the hull should be considered not the most convenient. For example, in the conditions of the hot climate of North Africa, the paratroopers received constant additional heating, which hardly improved their well-being, even despite the open hull. At the same time, in the winter in Europe, especially in the northern regions of the USSR, such a “stove” was a help for the paratroopers and the shooter and driver should have envied them, who did not have such a heater in the control department.

After the end of World War II, the service of Universal Carrier armored personnel carriers in the British army continued until the 1950's. They managed to take part in the hostilities during the war in Korea. At the same time, part of the armored vehicles was delivered to third countries, where it continued to remain in service until the 1960's. A large number of such conveyors of various modifications and production from different countries have survived to this day. For example, in Russia in the armored museum in Kubinka a flamethrower modification of the Universal Carrier armored personnel carrier is presented.