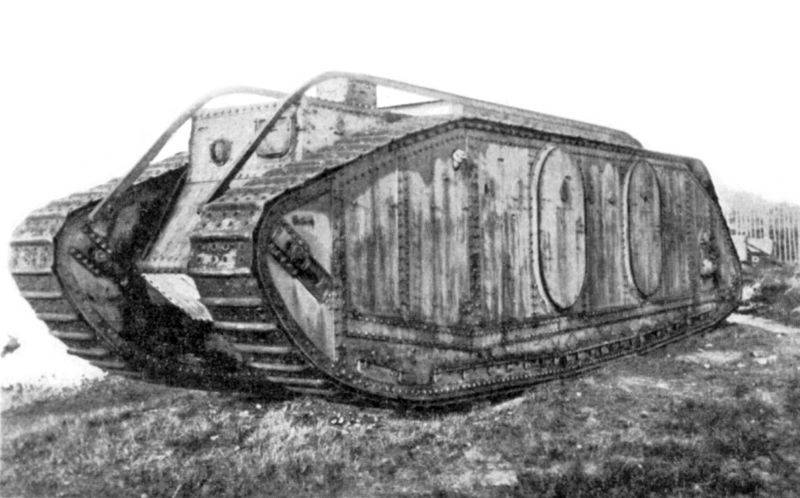 The first armored personnel carriers appeared long before the advent of infantry fighting vehicles. New combat vehicles designed to transport troops appeared at the same time that the first tanks entered the battlefields. Even during the First World War, the British created the Mark IX crawler transport tank, which they began to produce in 1917. It is this fighting vehicle that can rightly be called the first real armored personnel carrier.

How did the first armored personnel carrier appear?

The appearance of the first armored personnel carriers is inextricably linked with the appearance of the first tanks on the battlefield, especially when you consider that they were almost the same vehicles. Both were the first English rhomboid tanks that could not be confused with other armored vehicles because of the characteristic shape of the tracked contour covering the armored corps. The debut of the tanks took place on 15 on September 1916, when the British tanks Mk. 1 went into battle during the famous Battle of the Somme. Before the construction of the first armored personnel carriers began, there was still a year left.

Already during the first battles involving tanks, it became clear that the infantry did not keep up with the armored giants. At the same time, it was not even about speed, until the moment armored personnel carriers began to move at the speed of automotive equipment, tens of years would pass. The first tanks on the battlefield moved at the speed of a pedestrian, but the soldiers did not keep up with the armored vehicles for this reason, they were stopped by dense enemy fire. For the infantryman, mortal danger was posed not only by bullets, but also by fragments of mines and shells. In turn, many of the positions that it was possible to repel or break through with a tank attack turned out to be lost due to the lack of infantry filling and the consolidation of actions between infantry and tanks. The fact that the infantry during the attack turned out to be very vulnerable to machine gun fire made the British think about creating special vehicles for the safe transportation of soldiers. 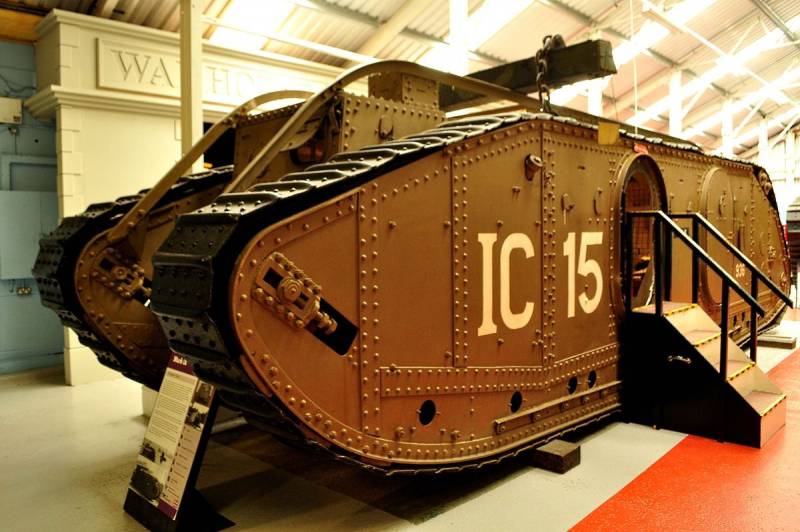 The option of landing several infantrymen in each tank was also considered, but there was little space inside, and apart from crampedness, exhaust gases created a great inconvenience, since the soldiers were in the gas-polluted compartment. The release of carbon dioxide and cordite vapor led to the fact that crew members of the first combat vehicles often lost consciousness. Often they became victims of intoxication, so they had to be carried out into the open air in an unconscious state, what an airborne potential.

That is why the idea was formulated to create a specialized combat vehicle, which would provide the soldiers with not only protection, but also mobility. The soldiers needed to be given the opportunity to get to the enemy’s positions as close as possible, while avoiding unnecessary losses from the infantry weapons and artillery shells. The second important advantage was that the infantrymen were freed from the expenditure of forces on moving over difficult, rough terrain. Thanks to this, before the attack, they had to maintain great freshness and fighting efficiency. All these considerations led the British military and designers to the idea of ​​creating the first armored personnel carrier. This concept will only reach true prosperity by the Second World War, when in Hitler Germany a whole family of half-track armored personnel carriers will be created, perfectly coping with these tasks. But the British were still the first to initiate work on creating a vehicle for transporting infantry based on a tank in the summer of 1917. The work on the creation of the first armored personnel carrier was led by Lieutenant G.R. Wreckham.

The construction of the first two prototypes of armored personnel carriers began in England in September 1917 by the largest British industrial company of the early 1899th century - Armstrong Whitworth & Co Ltd, which specialized mainly in the production of various weapons and ships. For example, it was this company that produced for Russia the world's first icebreaker of the Arctic class "Ermak", which was put into operation in XNUMX, and decommissioned fleet only in 1963 year.

As a basis for the infantry transporter, they took the already developed Mark V tank, the hull of which was specially extended to 9,73 m (for Mark V - 8 m). At the same time, the very layout of the hull of the new combat vehicle was not much different from the related tank. The main differences were the Ricardo engine displaced in the front of the body with 150 horsepower. and the placement of the troop compartment between the power plant and the gearbox, which is located in the stern. Moreover, on the roof of the first stories The armored personnel carrier is a small superstructure and a commander’s cupola of cylindrical shape. The length of the landing squad formed inside the hull, from which all the excess was removed, was 4 meters, width - 2,45 meters. This made it possible to place soldiers in full outfit in the body of the combat vehicle up to 30.

To facilitate the location of the troops inside the combat vehicle, a water tank was installed inside. But the main innovation that made life easier for ordinary soldiers was two exhaust fans, which the designers placed in the roof of the armored personnel carrier. In addition to the 30, the first armored personnel carrier in the history also carried a crew of four people - the commander of a combat vehicle, driver, mechanic and machine gunner. The armament of the combat vehicle consisted of two 8-mm Hotchkiss machine guns. In addition, on the sides of the hull there were 8 loopholes through which the paratroopers could fire from personal small arms. Four such loopholes were located in four large oval-shaped doors that were located on the sides of the hull (two on each side), it was through these doors that the landing and landing took place.

Reservation of the first armored personnel carrier was left at the level of the Mark V. It was not possible to increase the level of armor protection, as this would automatically lead to a deterioration in the already low driving performance of the armored personnel carrier. It is not surprising when you consider that the 27-ton mass combat vehicle was driven by the 150-strong engine. As a result, the thickness of the armor in the frontal part, hull sides and aft did not exceed 10 mm, the hull roof and bottom were even weaker-armored - only 6 mm. In the tests, the newly made armored personnel carrier showed a maximum speed of 6,9 km / h, which was not bad for the first armored vehicles. At the same time, the APC easily crossed trenches up to 3,8 meters wide, but the cruising range was very small - only 32 km. 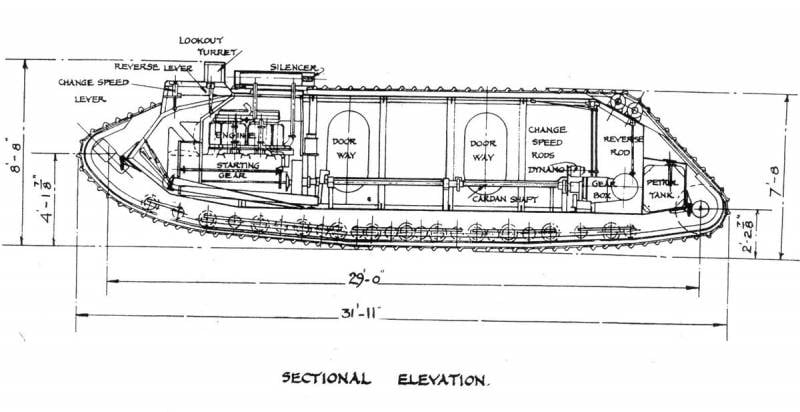 The scheme of the armored personnel carrier Mark IX

The undercarriage of the first armored personnel carrier in the history consisted of 24 road wheels with blocked suspension, front guides and rear drive wheels. The shape of the hull, the caterpillar stroke and the very structure of the chassis were characteristic of all diamond-shaped tanks, and Mark IX was no exception. The lower part of the caterpillar was supported by 24 blocked rollers, the upper part - by a guide groove (metal plate) and two tension rollers from each side, shifted to the stern. The caterpillar itself was metal with gearing. For the characteristic appearance of the front of the hull and the silhouette of the tracks, which resembled a muzzle, the armored personnel carrier created was nicknamed “Pig”.