The most massive armored personnel carrier of World War II 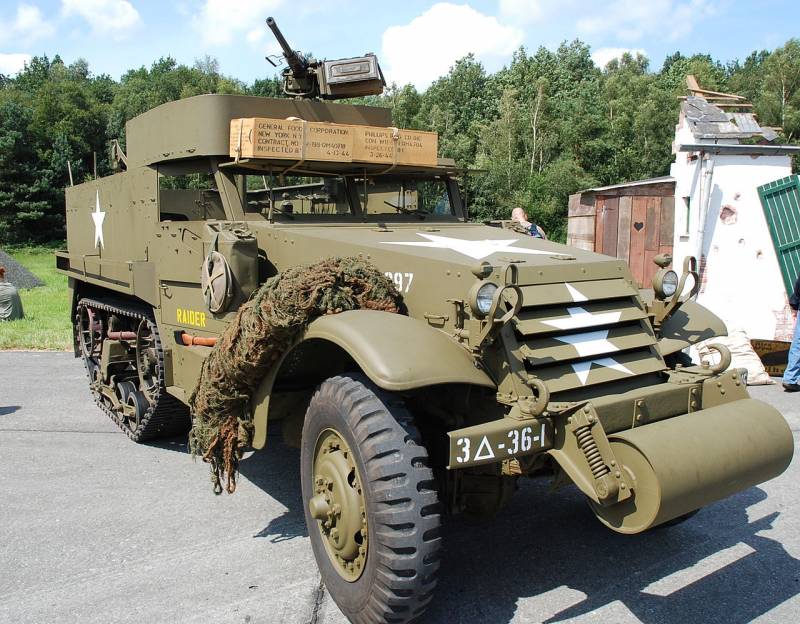 The history of the creation of the M3 armored personnel carrier

As in Germany, the first full-fledged American armored personnel carrier was born from a line of half-tracked tractors. The creation of half-track armored artillery tractors and simply vehicles with a wheel-caterpillar mover in the United States began in the early 1930's. Four American companies James Cunningham and Sons, GMG, Linn, Marmon-Herrington worked on the creation of new machines at once. The progenitor for the vehicles being developed in the USA was the French Citroen-Kegresse P17 semi-tracked vehicle. Several of these cars, as well as a license to manufacture them, were acquired by James Cunningham and Sons.

On the basis of the French chassis, the Americans developed their own vehicles, which received the designation from T1 to T9E1. The first American half-track car was designated the Half-Track Car T1, it was already ready in the 1932 year. In the future, such vehicles have continuously developed. The T9 model was considered the most successful of the first prototypes. It was based on the chassis of a Ford truck with the 4x2 wheel arrangement, a Timken caterpillar mover was installed on the machine instead of the rear axle, the caterpillar was rubber-metal.

Half-tracked vehicles were interesting primarily for the American cavalry, and later tank parts. This technique had increased cross-country ability and could operate better in rough terrain and off-road conditions compared to conventional trucks. After the appearance of the light wheeled reconnaissance armored car M1938 Scout in 3, the U.S. military decided to combine this vehicle with the existing developments of wheel-tracked tractors. At the same time, the body of the car, of course, was increased.

The first version of the new combat vehicle, combining the elements of the chassis and body of the reconnaissance armored vehicle M3 Scout and the rear tracked trolley Timken, received the designation M2. This vehicle was positioned as a half-track armored artillery tractor. The machine was actively used in this capacity throughout the Second World War, all in the USA, an 13 691 similar tractor was assembled that could carry anti-aircraft, anti-tank and field guns, along with a crew of 7-8 people. Tests of the new car showed great potential as a specialized vehicle for transporting motorized infantry. Quite quickly, a full-fledged M3 armored personnel carrier appeared, which outwardly differed little from a half-track armored artillery tractor. The main difference was the increased M3 length, which could carry up to 10-12 paratroopers, while the entire interior of the body was rearranged. Serial production of the new armored personnel carrier began in the 1941 year.

Already during the war, the American military had the idea to combine the M2 and M3 models so as not to keep two very structurally close combat vehicles in the troops. M3A2 armored personnel carrier was supposed to be unifying, the start of mass production of which was planned for October 1943 of the year. But by this time, the program for the production of half-tracked combat vehicles was seriously revised. According to the original plans, it was planned to collect more than 188 thousand, these are astronomical figures. However, by the middle of the 1943 of the year it became clear that the M8 wheeled cannon armored car was more suitable for arming the reconnaissance units, and the M5 fast tracked tractor for artillery units. In this regard, the need for wheeled and tracked vehicles has seriously decreased, and the production of a single M3A2 armored personnel carrier has been abandoned. 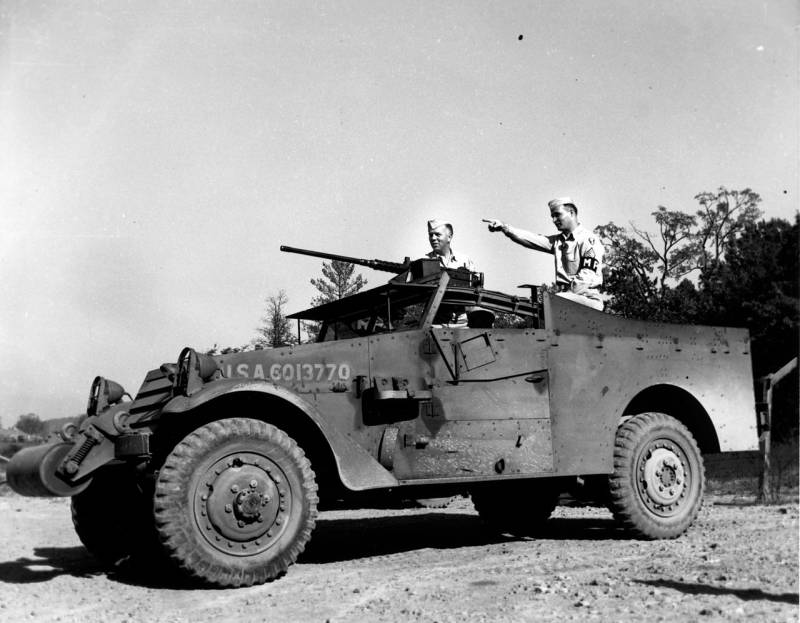 In the design of armored personnel carriers, automobile units and components, which were produced by a well-developed American automobile industry, were widely used. The mass production of armored wheeled caterpillar tractors and armored personnel carriers is largely due to the presence of such a production base that made it possible to produce military vehicles at a large number of enterprises without prejudice to the release of freight transport and tanks.

Armored personnel carriers were distinguished by the presence of an open box-shaped hull simple in production, the sides and feed of the hull were strictly vertical, rational angles of inclination of armor were absent here. The hull was assembled using rolled armored plates of surface hardened armor steel, the thickness of the armor on the sides and stern did not exceed 6,35 mm, the highest level of reservation was in the frontal part - up to 12,7 mm (half an inch), this level of protection was provided only by bulletproof booking. Rational angles of inclination had only a sheet of the engine compartment (26 degrees) and a frontal sheet of the control compartment (25 degrees). Reservation of the bottom was absent. For landing and disembarkation of the crew, two doors were used on the sides of the hull, and paratroopers landed through the door in the aft sheet of the hull, from the frontal fire of the enemy, the paratroopers were protected by the body of the armored personnel carrier. The crew of the machine consisted of 2-3 people, the landing - 10 people. On the sides of the hull there were five seats, under which there were luggage compartments, the paratroopers sat facing each other. 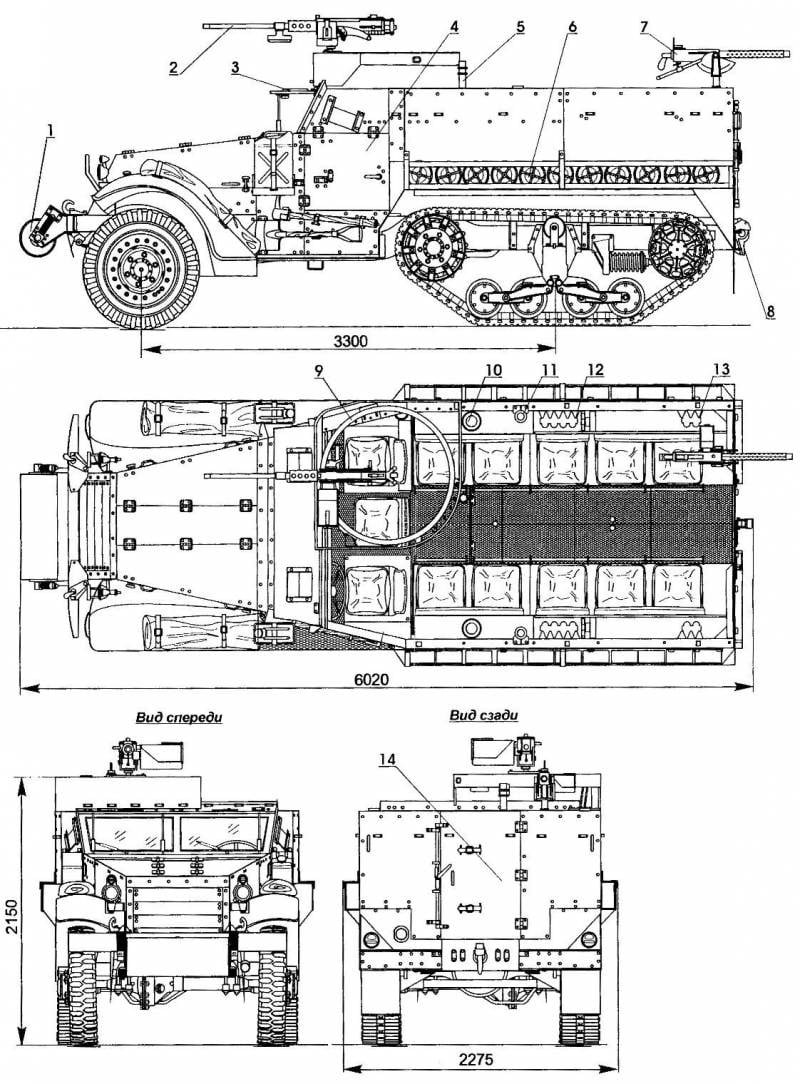 The M3 armored personnel carriers used a white 160AX liquid-cooled six-cylinder in-line liquid-cooled engine. The engine produced maximum power 147 hp at 3000 rpm. This power was enough to disperse an APC with a combat weight under 9 tons to a speed of 72 km / h (this maximum speed was indicated in the instruction manual). The cruising range of the car along the highway was 320 km, the fuel reserve was approximately 230 liters.

All American armored personnel carriers were distinguished by sufficiently powerful small arms. The standard was the presence of two machine guns. The large-caliber 12,7-mm Browning machine gun M2HB was mounted on a special M25 machine between the seats of the commander and the driver, and the 7,62-mm Browning M1919A4 machine gun was located in the rear of the hull. On the M3A1 version, the heavy machine gun was already placed on a special M49 ring turret with additional armor. At the same time, at least 700 cartridges of 12,7-mm caliber were transported in each machine, up to 4-x thousand cartridges for an 7,62-mm machine gun, as well as hand grenades, sometimes the Bazooka anti-tank grenade launchers were also placed, in addition to weapons the paratroopers themselves. 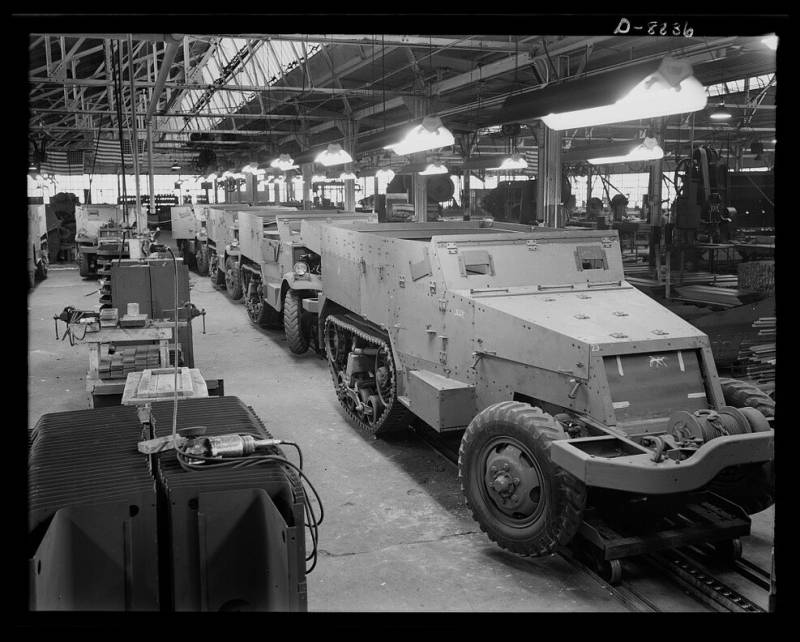 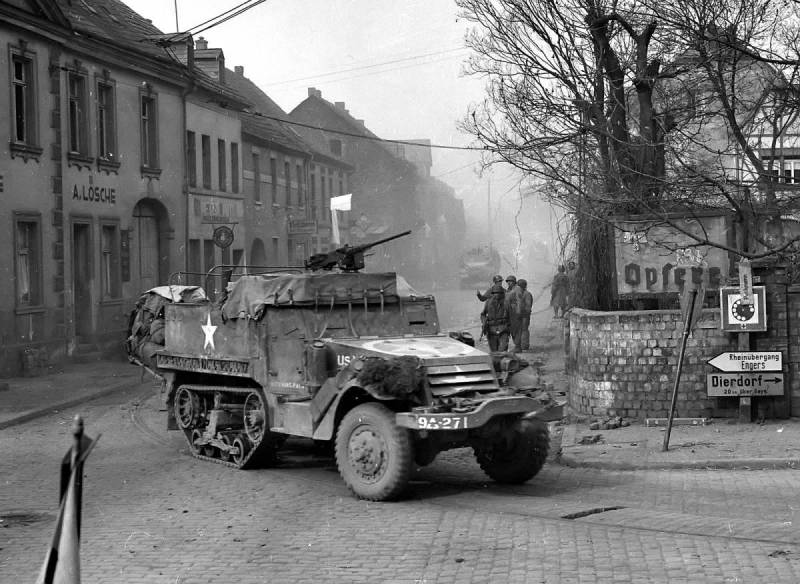 Over time, the Americans developed tactical models and techniques for using new equipment, corrected children's sores, and actively used M3 armored personnel carriers in all theaters of war. Already during the fighting in Sicily and in Italy, the number of complaints about new equipment decreased significantly, and reviews from the troops were replaced by positive ones. During Operation Overlord, armored personnel carriers were used especially massively and were subsequently actively used by the Americans and their allies until the end of hostilities in Europe. The fact that the car turned out to be quite successful is evidenced by both the huge release of both the M3 armored personnel carriers and special equipment based on them, and the armored M2 half-track artillery tractors, whose total production during the war exceeded 50 thousand units.