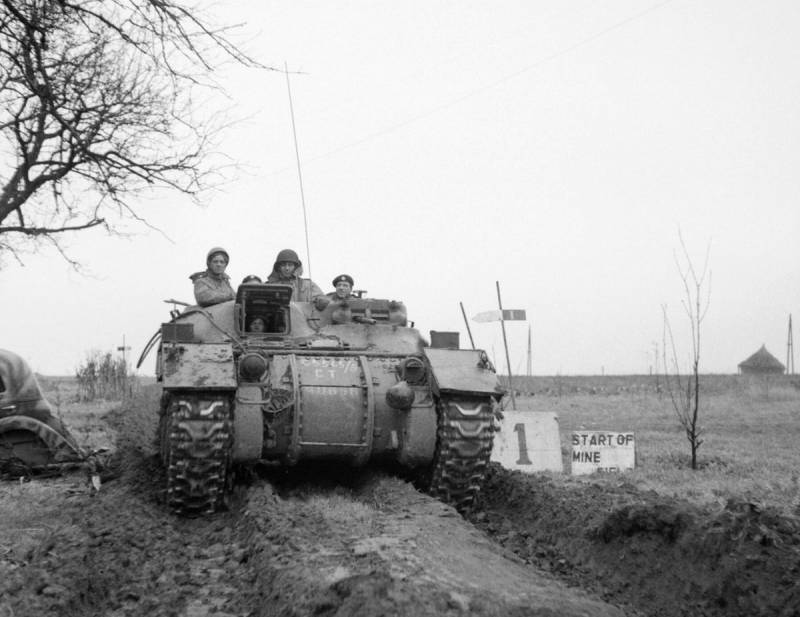 BTR Kangaroo based on the tank Ram

In the Allied armies, the peaceful word "Kangaroo" has become quite common for the heavy tracked armored personnel carriers of the Second World War, united by another word - improvisation. The Canadians, and then the British, turned to the idea of ​​creating such armored vehicles not from a good life. There were few similar specialized equipment at hand. The first attempts to create improvised armored personnel carriers were made back in the 1942-1943 years in North Africa by reworking the light American tanks M3 and M5 Stuart, from which the towers were dismantled. These combat vehicles were used as artillery tractors. At the same time, attempts to use the first “Kangaroo” as armored personnel carriers were considered unsuccessful due to poor reservation of the original tanks. But most likely, it was a misuse of such equipment, given that such improvised APCs had tangible advantages in smaller sizes and visibility on the battlefield, high maneuverability and mobility. One way or another, it was precisely as armored personnel carriers that alterations from the M3 and M5 Stuart tanks were practically not used.

The next time the idea of ​​creating an armored personnel carrier on the tank chassis turned in the summer of 1944. The Canadians, worried about the large number of losses among the infantry in their motorized rifle units, decided in a short time to create a heavy tracked armored personnel carrier that could not only follow the tank fist, but also reliably protect the infantrymen. At the same time, British and Commonwealth states experienced a shortage of American M3 half-track armored personnel carriers, which the US needed to form its own units. And built in huge quantities universal conveyors Universal Carrier possessed conventional combat value and limited capacity, not to mention the security of the landing. 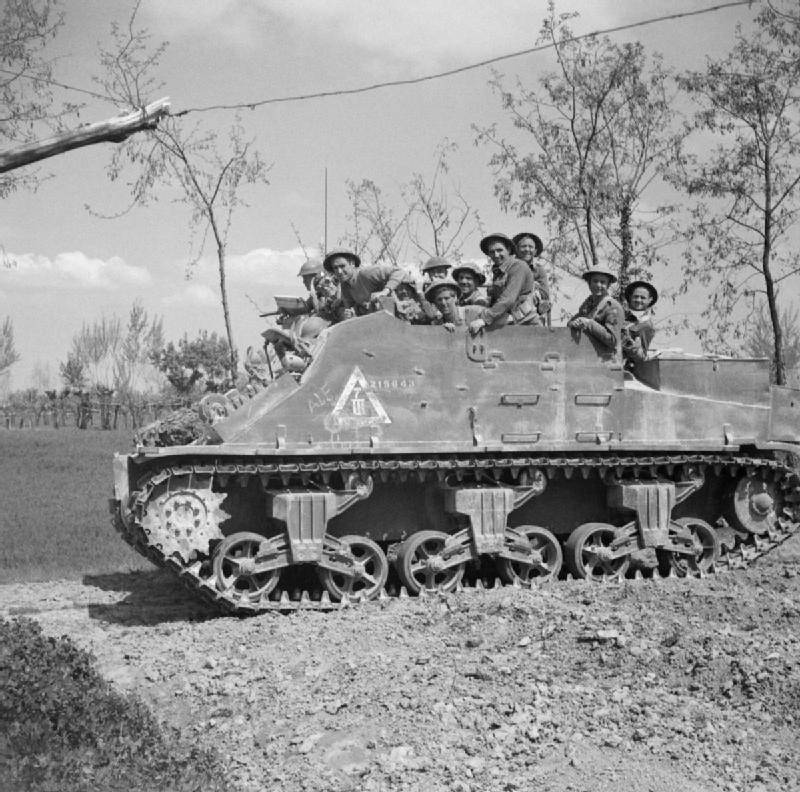 Since there was simply no time to create new armored vehicles from scratch, Canadians turned to the improvisation worked out earlier with the alteration of military vehicles already in service. The 72 M7 Priest self-propelled artillery guns immediately came into hand. This was an ideal option, it was only necessary to dismantle artillery weapons and slightly modernize the spacious conning tower. It was also important that this version of the alteration did not exclude the possibility of the reverse transformation of combat vehicles into self-propelled guns. Such improvised armored personnel carriers took part in the fighting in August 1944 as part of the Totalize operation, the British-Canadian offensive with the aim of breaking through from the bridgeheads in Normandy south of Caen to the heights near the city of Fales. The initial stage of the operation was accompanied by a massive nightly bombardment of advanced German positions, as well as the use of heavy Kangaroo armored personnel carriers, which, along with the tanks, followed the firing rampart. The bombing and subsequent attack of the Canadian units began at 23 hours 7 August 1944 year.

The first experience using improvised armored personnel carriers was rated very highly. Machines that possessed the patency of the tanks were distinguished by good armor and reliably protected the landing from bullets, fragments of shells and mines, as well as from small-caliber artillery shells. The losses of the Canadian units decreased, so the generals enthusiastically began to remake additional Priest self-propelled guns into armored personnel carriers. But self-propelled artillery mounts are not enough for everyone, so quickly enough the focus shifted to the Canadian tank Ram (from the English ram), which did not take part in hostilities on the fronts of World War II. 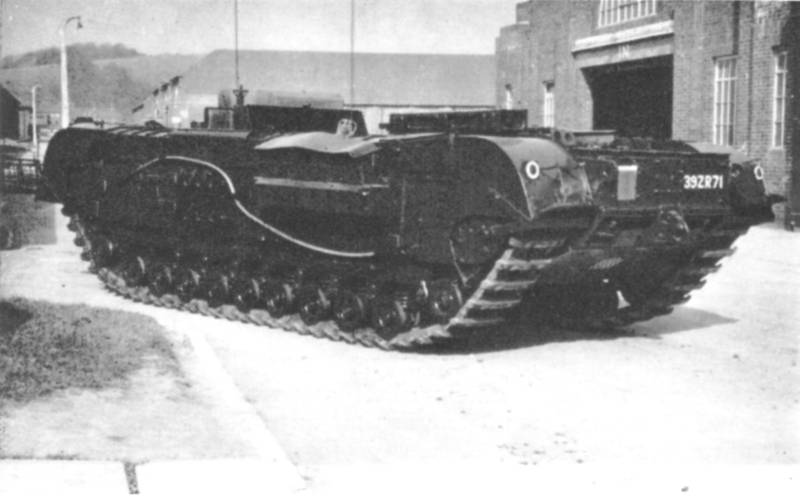 Armored personnel carrier "Kangaroo" on the basis of the Churchill tank

In Canada, they managed to assemble almost 1900 Ram tanks, which had a conditional combat value and in the 1944 year could not resist German combat vehicles. However, such tanks were widely used in training units for training tankers, in the UK there were enough such combat vehicles. The British, who appreciated the Canadian experience, also began to remodel the Ram tanks into makeshift Ram Kangaroo armored personnel carriers. At the same time, Sherman serial tanks were also redone. Mostly, vehicles that were previously damaged in battles were used, from which, like Ram tanks, the tower was dismantled. To this day, a photograph even came up with a reworking of the Churchill tank in the makeshift armored personnel carrier "Kangaroo", whether this vehicle took part in the battles is unknown. In total, several hundred self-propelled guns and tanks were converted into heavy tracked armored personnel carriers.

All Kangaroo armored personnel carriers were improvisation. A distinctive feature of such armored vehicles was the simplicity of alteration, at the first stage no action was even taken to facilitate the process of landing and landing. The cars were simple and reliable, since all were based on the chassis of medium tanks. There were no problems with the maintenance and operation of such equipment in the troops; some special spare parts were not required for them. At the same time, the simplicity of work made it possible to remake combat vehicles directly in field workshops at the front, which was a significant plus for ersatz armored personnel carriers.

The original M7 Priest self-propelled guns were redesigned to be the ideal and easiest, but there were few free self-propelled guns. The problem was that serviceable installations that were needed at the front were redone into armored personnel carriers. That is why over time, Canadians and the British switched to remaking unused Ram tanks and damaged Sherman tanks in battle. At the same time, self-propelled guns were preferable for these purposes, since they initially had a large open cabin. 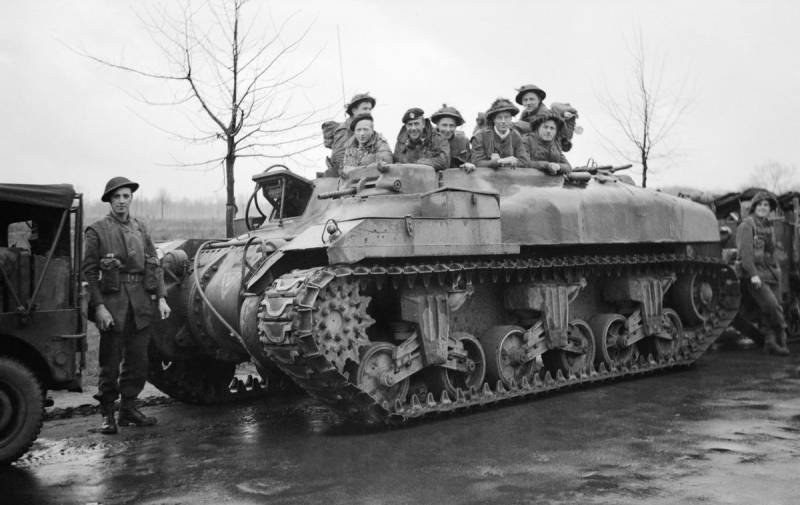 BTR "Kangaroo" based on the tank "Rem"

When converting to heavy tracked armored personnel carriers from M7 Priest self-propelled guns, the 105-mm howitzer and all related equipment, including laying under the shots, were dismantled. The presence of a spacious armored wheelhouse with an open top made it possible to place fighters with weapons inside up to 15. At the same time, theoretically, even more soldiers could be transported inside, as often happened, but with less comfort. The paratroopers left the car from the stern, through the roof of the engine compartment. It was convenient also because from the front the fighters were reliably covered from enemy fire by armor. Armored personnel carriers "Kangaroo" had protection not typical for such equipment, their reservation reached 38-50 mm. Another advantage of the M7 Priest self-propelled guns was the presence in the right corner of the body of a cylindrical sponson to accommodate a machine-gun ring turret. Usually a large-caliber 12,7-mm Browning M2 machine gun was installed here. Thus, the armored personnel carrier automatically received powerful small arms.

But the use of artillery systems, which were convenient for alteration into armored personnel carriers, but such artillery systems that were needed in battle, was not entirely expedient, so quickly it was decided to “put under the knife” Canadian Ram tanks. The “Sheeps” who didn’t get to the battlefields were distinguished by even greater reservation, the reservation of the forehead of the hull ranged from 44 to 76 mm, and the sides - 38 mm. The tanks and turret box were dismantled from the tanks, all unnecessary equipment was removed and primitive seats were placed inside, after which newly made armored personnel carriers could transport soldiers with full armament to the 11, the crew of the armored personnel carrier consisted of two people. At the same time, the paratroopers were located in the former fighting compartment of the tank, where they got, just climbing into the hole in the roof of the hull. When converting to armored personnel carriers, tanks kept exchange rate machine guns located in the frontal part of the hull, so that the machines again had regular weapons, and the paratroopers themselves could easily fire directly from the fighting compartment, protruding from the opening in the hull roof. A distinctive feature of the Ram tanks and armored personnel carriers at their base was the turret on the left side of the hull, in which the 7,62-mm Colt-Browning M1914 machine gun was installed. Already during combat operation, for the convenience of paratroopers, handles and handrails were welded onto the armor. 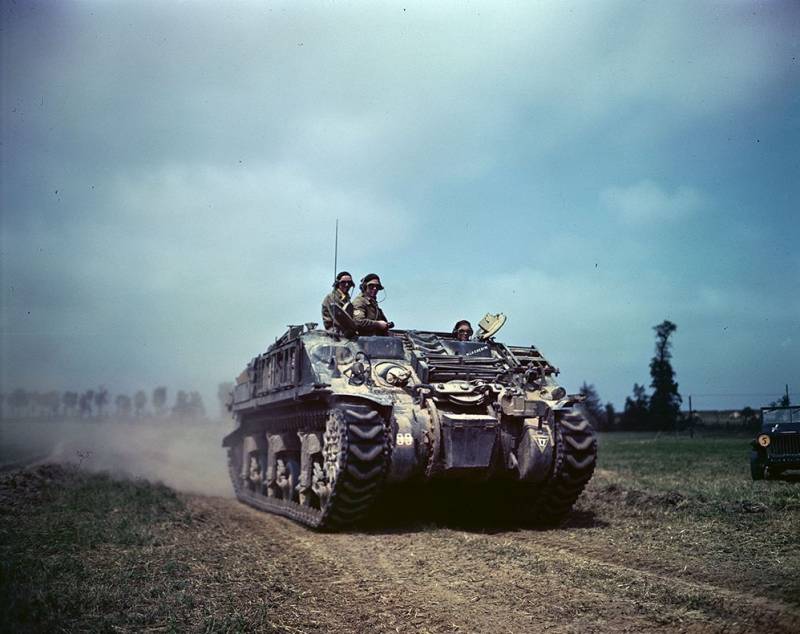 BTR "Kangaroo" based on the tank "Sherman"

Ctrl Enter
Noticed oshЫbku Highlight text and press. Ctrl + Enter
We are
The project of an engineering tank Churchill Ardeer Aggie (UK)Heavy Israeli armored vehicle "Ahzarit"
14 comments
Information
Dear reader, to leave comments on the publication, you must to register.