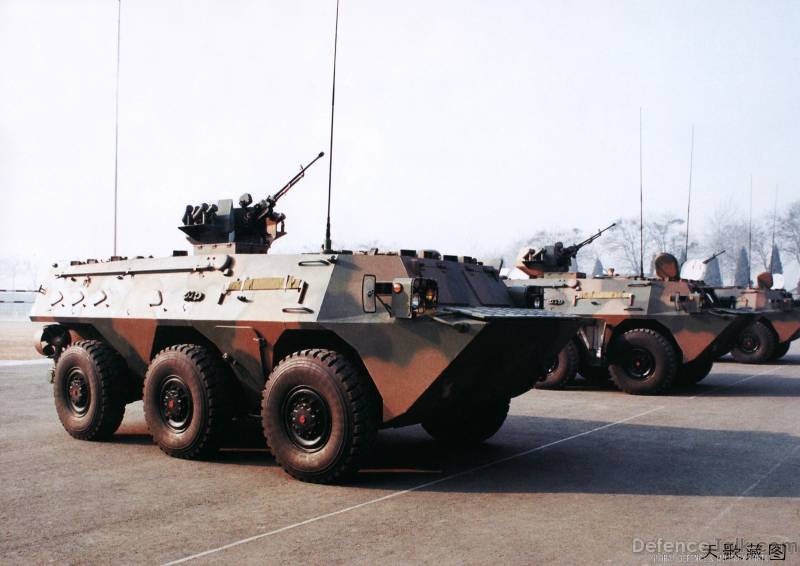 The debut of the armored personnel carrier WZ-551

The first full-fledged appearance of the new Chinese armored personnel carrier in public took place in November 1986. At the Asiandex international exhibition in Beijing, one of the first 16 prototypes of the new Chinese wheeled armored personnel carrier was presented. The developer of the new armored fighting vehicle was the famous Chinese company NORINCO. This large state-owned corporation, whose name is translated from Chinese as “China Northern Industrial Corporation”, specializes in the production of military equipment. This is a very large Chinese automaker, developing both passenger and commercial, and freight transport.

It is not surprising that this company is responsible for the development of wheeled armored vehicles in the country. Initially, NORINCO specialists presented a whole line of combat vehicles. In addition to the 6x6 version, the WZ-4 4x550 models (primarily for police units) and the 8x8 WZ-552 version (as a base for placing heavy weapons, for example, 122 mm howitzers) were presented. The three-axle version became the main one and served as the basis for a huge number of combat vehicles from conventional armored personnel carriers armed with a heavy 12,7-mm machine gun to wheeled infantry fighting vehicles with cannon armament (25-mm automatic gun), ambulances, command post vehicles, as well as self-propelled 120 mm mortars and ZSU with a twin 23 mm artillery mount. 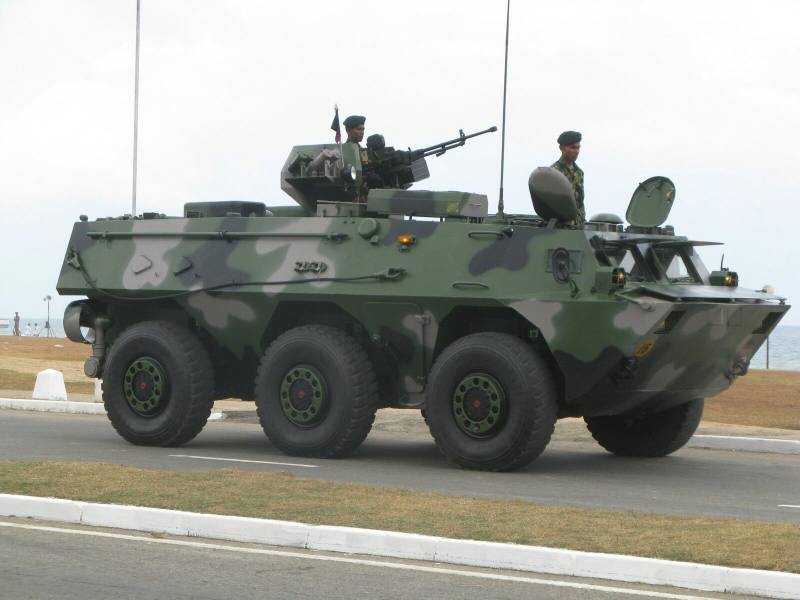 The new Chinese combat vehicle immediately attracted the attention of specialists. Many Western experts quickly recognized the new French armored personnel carrier VAB (front-line fighting vehicle) as a novelty. Created by engineers from Renault and Saviem at the request of the French army, the VAB combat vehicle was put into mass production back in 1976. BTR was presented in three main versions - biaxial, triaxial and four-axis. In total, since 1976, more than 5000 thousand such military vehicles were produced, most of which were supplied to the French army, and the rest went for export to at least 15 countries of the world.

In China, this combat vehicle was demonstrated in the early 1980s. At the exhibition, a model with a 6 × 6 wheel arrangement was shown, armed with the French second-generation ATGM “HOT”. At the same time, the Renault and Euromissile companies, which showed the fighting vehicle in China, claimed that they did not sell the military equipment itself or the technical documentation for it to Beijing. And yet, a close acquaintance with the WZ-551 allows many experts to say that we are facing, if not twins, then immediate relatives. Although the Chinese press claims that the WZ-551 armored personnel carrier was developed in the Celestial Empire by local engineers on the basis of the Tiema heavy-duty commercial truck, however, using a power plant manufactured in Germany. At the same time, the Chinese truck itself was built on the basis of the Mercedes-Benz 2026 truck.

The layout of the armored personnel carrier is standard for combat vehicles of this class and repeats the layout of foreign triaxial counterparts. The hull itself is made by welding from steel armor plates, which the designers placed for better protection of the crew and units of the combat vehicle at rational angles of inclination. According to the developers, booking WZ-551 is slightly better than tracked armored personnel carriers “Type 63”. As with most such combat vehicles, armor only protects the crew from small arms fire. weapons and small fragments of shells and mines. 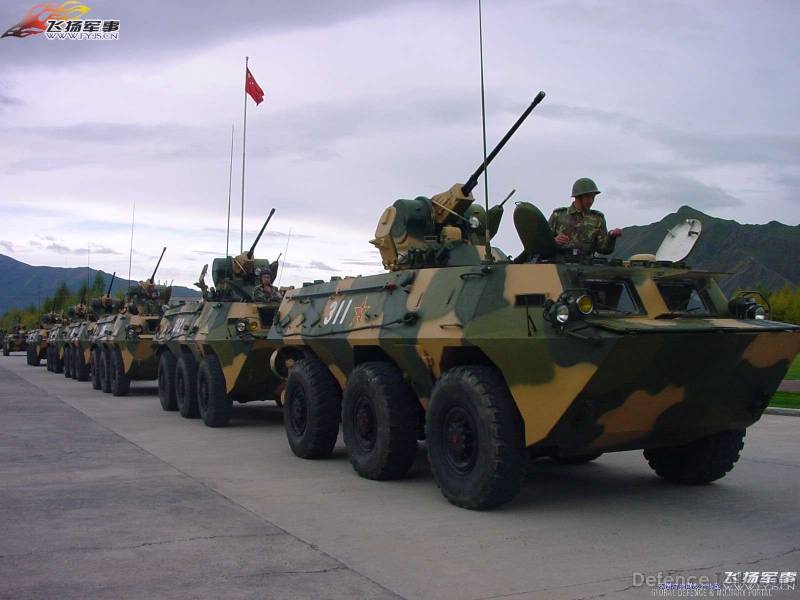 Type 92 with 25 mm automatic guns
In the front of the Chinese wheeled armored personnel carrier, there is a control compartment, in which there are jobs for the commander of the combat vehicle (right) and the driver (left). The control compartment is separated from the rest of the internal space of the APC by a sealed partition in which there is a door. There are also two hatches in the roof above the commander and driver’s seats, which can be used to exit the combat vehicle. To review the road and the terrain, the commander and driver use two large-sized bullet-proof glasses located in the upper part of the frontal part of the hull; there are also bullet-proof glasses on the sides, but smaller ones. In a combat situation, the glazing is covered with special armored shields, and the crew uses prism surveillance devices located in front of the hatches in the roof of the hull to assess the situation.

In the middle of the hull is a power plant. Moreover, on the right side along the side there is a narrow hole that allows you to get from the control compartment into the landing compartment. The engine itself is located closer to the left side of the combat vehicle, an exhaust pipe is located on the same side, and the air intakes are on the roof of the armored personnel carrier. The heart of the car is a turbocharged diesel engine with an air cooling system. This is a licensed copy of an 8-cylinder German diesel engine with a maximum power of 320 hp. The engine is paired with an automatic gearbox: 5 speeds forward, one back. Engine power is enough to disperse a combat vehicle with a combat weight of 12,5 to 15,8 tons to a speed of 90 km / h when driving on the highway. Cruising range is 800 km.

At the rear of the armored personnel carrier is an airborne squad, which can accommodate from 9 to 11 people in full gear. The landing sites are located along the hull sides. For landing and disembarkation, the motorized rifle uses a large door located in the aft armor plate. The door has an embrasure for firing from personal weapons, as well as a block of surveillance devices. There are 4 more loopholes for shooting from personal weapons from each of the sides. In the roof of the airborne compartment, the designers placed 4 large hatches, which can also be used by motorized gunners. At the same time, hatches can be fixed in a vertical position so that they provide additional protection from enemy fire. On the sides of the troop compartment there are fuel tanks that hold up to 400 liters of fuel, which also play the role of additional protection. 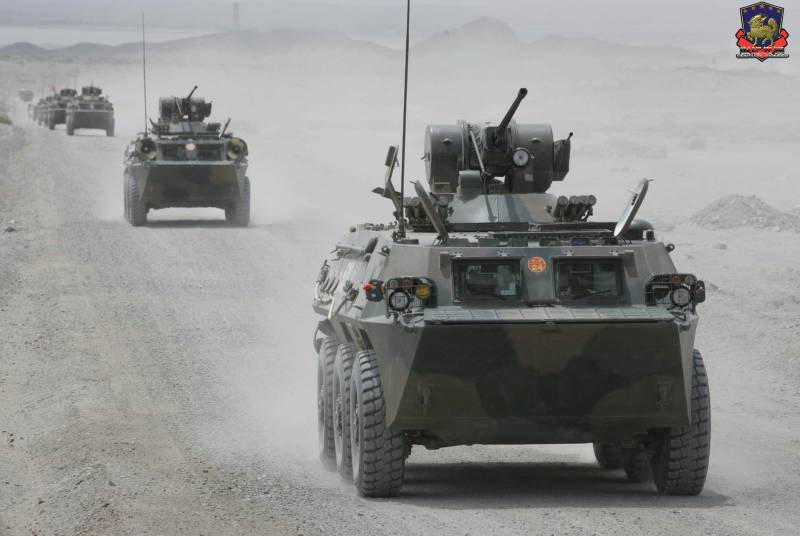 On the roof of the airborne compartment, which is combined with the military, on the armored personnel carriers, a standard turret with a large 12,7-mm machine gun is installed. The machine gun is serviced by one of the shooters. This is a standard turret with a heavy machine gun, which is widely used on Chinese tracked armored personnel carriers. For additional protection, it is covered with armor plates protecting the shooter from bullets and small fragments. The standard ammunition for a 12,7 mm machine gun is 500 rounds. The version with machine gun weapons is designated as Type 92A (ZSL-92A), with the cannon weapon - with a 25-mm automatic installation - Type 92 (ZSL-92). The version with cannon weapons is often called wheeled infantry fighting vehicles.

Type 92 armored personnel carriers have a 6x6 wheel arrangement with all driving wheels, two front axles being steered. The combat vehicle received a centralized tire inflation system. At the same time, the manufacturer guarantees that even in the event of tire damage by bullets or splinters, an APC will be able to drive up to 100 kilometers at a speed not exceeding 40 km / h. At the same time, the armored personnel carrier is amphibious, for propulsion through the water there are two propellers located along the sides in the annular channels in the rear of the hull. They can be rotated 180 degrees, which provides the armored personnel carrier with good maneuverability on the water. The maximum speed on the water surface does not exceed 8,5 km / h.

The potential of the armored personnel carrier WZ-551

It is noteworthy that the combat vehicle developed in the early 1980s was the first to be adopted by the 127th Motorized Infantry Division from the Jinan Military District. This unit is considered one of the elite military units in the PLA. This at least indicates the demand for this military equipment and that the Chinese army was waiting for the appearance of such military vehicles. 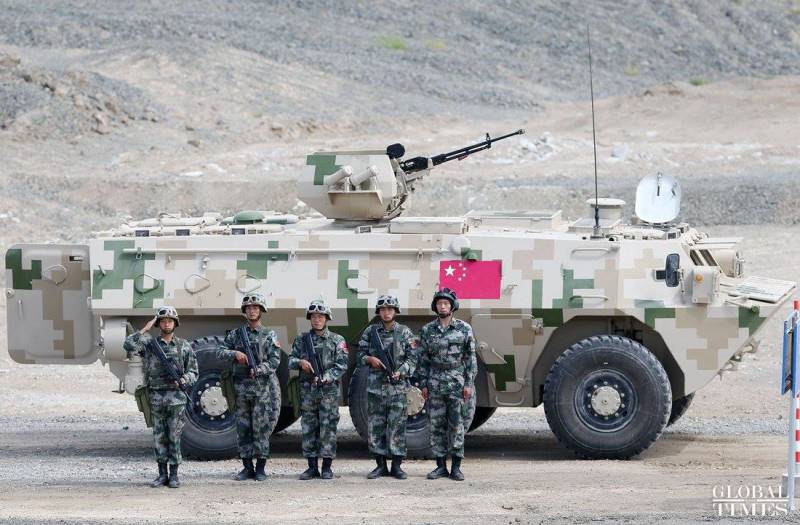 Regardless of whether China copied the designs of French engineers and designers or not, the Chinese BZ WZ-551 (Type 92) turned out to be as demanded in the international arms market as the French VAB. The model has achieved particular success in the market of countries that are accustomed to counting every penny in military spending. Traditional markets for Chinese weapons are Africa and Asia. More than 92 foreign countries around the world have already become buyers of Type 20 armored personnel carriers, as well as military vehicles on this wheelbase. And although some of them acquired the equipment individually or by several dozen units, the figure is still worthy.

Ctrl Enter
Noticed a mistake Highlight text and press. Ctrl + Enter
We are
Collection of Chinese armored vehicles at the Military Museum of the Chinese RevolutionFamily of armored vehicles WZ 551 (China)
12 comments
Information
Dear reader, to leave comments on the publication, you must to register.