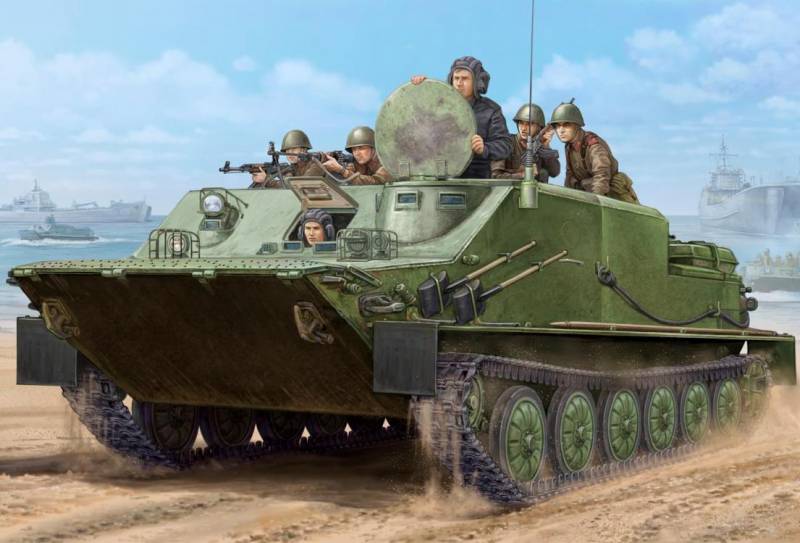 "Combat buses." The BTR-50P armored personnel carrier has largely become a unique combat vehicle. In addition to the fact that this was the first domestic tracked armored personnel carrier, the BTR-50 was also floating. Here his pedigree fully affected. This model was created on the basis of light floating tank PT-76. In addition to the paratroopers, the APC could safely transport up to two tons of cargo by water, including mortars and artillery mounts of a caliber of up to 85 mm inclusive, and fire on the enemy from the gun could be conducted directly during transportation. 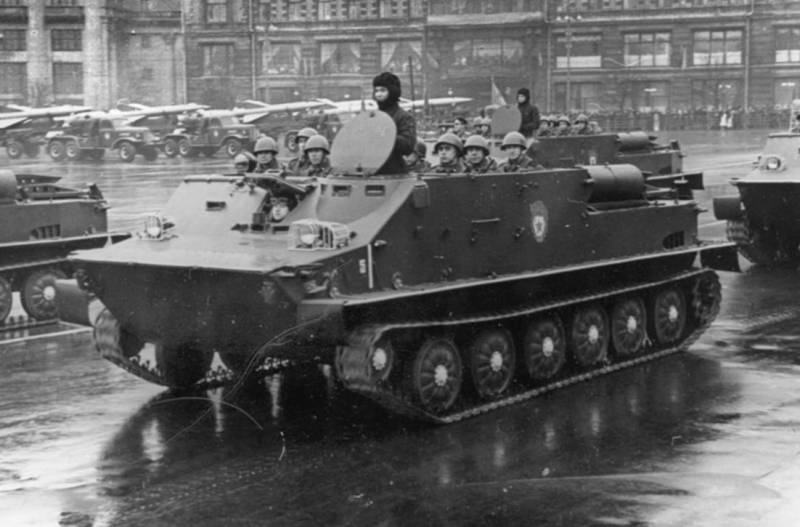 BTR-50P
One of the requirements of the technical specifications when creating a new combat vehicle was the transportation of two tons of various cargoes up to the division artillery and the GAZ-69 SUV. While working on a solution to this problem, designers encountered difficulties in choosing a loading device. Two main options were considered: a crane installation with an electric drive and a winch with a drive from the main engine of an armored personnel carrier with loading on folding ramps. In the course of work, the option with a crane was abandoned due to the excessive design and operational complexity of this solution.

An interesting fact is that already during the tests of the new tracked armored personnel carrier, on their own initiative, the designers fired on land and afloat from the transported artillery systems: the anti-tank 57-mm gun ZIS-2 and even the 85-mm gun D-44. Carrying out such tests with technical assignments from the military was not provided, the only requirement was the transportation of divisional artillery. To the surprise of many, these firing were successful and did not lead to breakdowns in the chassis of the armored personnel carrier and any incidents. Moreover, the vehicle’s buoyancy margin turned out to be quite sufficient for firing from a transported gun without flooding or capsizing an armored personnel carrier, which only confirmed the very high amphibious capabilities of the new vehicles. 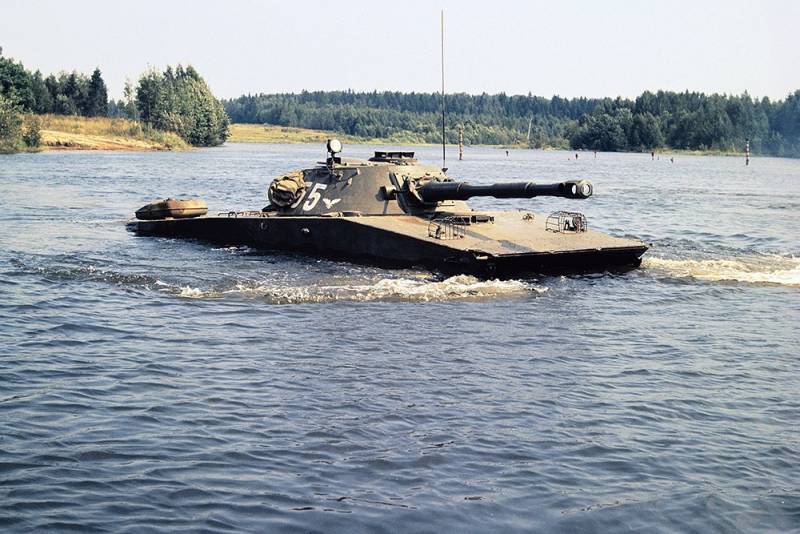 Light amphibious tank PT-76
The first prototype tracked armored personnel carrier was ready by the end of April 1950 of the year, from April 26 to June 11 of the same year, the APC was factory tested. The tests carried out allowed us to adjust the technical documentation for the new combat vehicle, in July two new prototypes of the “750 Object” were ready, the state tests of which were carried out in the second half of the 1950 year. Based on the results of state tests, the car was finalized once again, and in the third quarter of 1951, ChKZ submitted two more prototypes for testing, which passed the military test stage the following year. The military noted the insufficient design strength of the wave-reflecting shield, the unsatisfactory accuracy of the regular weapon battle - the large-caliber 12,7-mm DShK machine gun, as well as cases of spontaneous operation of fire fighting equipment. After eliminating all the shortcomings indicated by the military and finalizing the APCs, they passed control tests in the autumn of 1953, breaking thousands of kilometers of 1,5 altogether. In April of the following year, the new armored personnel carrier was officially adopted by the Soviet Army by order of the USSR Minister of Defense under the designation BTR-50P.

The new Soviet combat vehicle was unique in many of its characteristics and was a completely domestic development, which was created without regard to foreign models of such equipment. Moreover, the amphibious tank PT-76 with powerful artillery weapons, on the chassis of which the BTR-50P was created, was the only vehicle of its kind. In many ways, the creation of such equipment was helped by the extensive experience in the development of light amphibious tanks, which was accumulated in the USSR before the Second World War.

BTR-50P transports an artillery gun
BTR-50P got the chassis, transmission and power plant without changes from the PT-76 tank. The heart of the combat vehicle was the V-6PVG diesel engine, which developed maximum 240 horsepower. This power was enough to provide the tracked vehicle with a maximum speed of up to 45 km / h when driving on the highway and up to 10,2 km / h afloat. Cruising range was estimated in 240-260 km (on the highway). The new armored personnel carrier, as well as the light tank PT-76, was distinguished by high mobility and maneuverability characteristics, had a buoyancy reserve, good maneuverability and stability. It is for this reason that the new equipment came into service not only motorized rifle units, but also units of the marine corps. In addition to water bodies, the BTR-50 easily overcame obstacles in the form of ditches and trenches up to 2,8 meter wide and vertical walls 1,1 meter high.

In the aft part of the car, on the roof of the engine-transmission compartment, the designers placed folding ramps for loading artillery guns and mortars (the BTR-50P could transport the 120-mm mortar, 57-mm, 76-mm or 85-mm artillery), as well as all-wheel drive GAZ-67 or GAZ-69. For transporting weapons, the BTR was specially equipped with a loading device, which consisted of. in addition to folding ramps, from a powerful winch with a pulling force at the level of 1500 kgf. 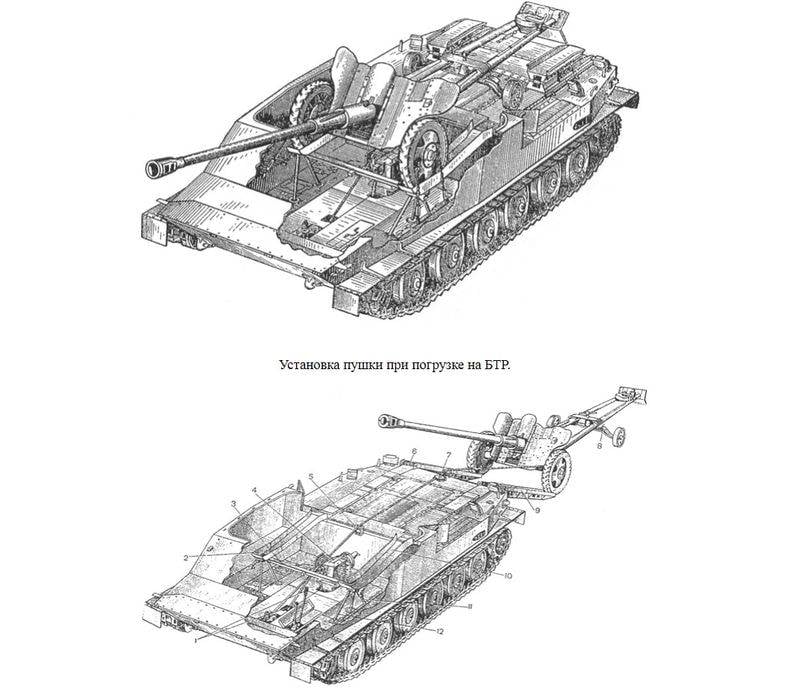 Despite the fact that a large-caliber machine gun DShK was installed on the prototypes during the tests, armored personnel carriers went into the series either without full-time armament or with the 7,62-mm SGMB machine gun, created on the basis of the SG-43 machine gun. The second attempt to arm the war machine with a large-caliber weapons was already undertaken in the year 1956. The prototype BTR-50PA was armed with an 14,5-mm KPVT machine gun, which, as before, was tried to be mounted on a turret with an armored back on the hatch of the BTR commander. Despite the efforts of the designers, this version of the BTR-50 with increased firepower did not reach the stage of adoption.

Already in 1959, the mass production of the tracked armored personnel carrier, which received the designation BTR-50PK, was launched into serial production. The main difference of this model was the presence of a roof, which covered the entire landing compartment. For landing and landing in the roof, three separate hatches were designed. It is worth noting that the roof in 1959 was equipped with all available Soviet armored personnel carriers, this also applied to wheeled vehicles - BTR-40 and BTR-152. The Soviet military took into account the experience of urban battles in Hungary in the 1956 year, when paratroopers were vulnerable to fire from the upper floors of buildings, in addition, it was easy to throw fuel bottles or grenades into the body. In addition to the protective function, the roof above the airborne compartment improved the already very good amphibious properties of the armored personnel carrier, allowing you to swim even with slight excitement, the water simply did not get inside the car. 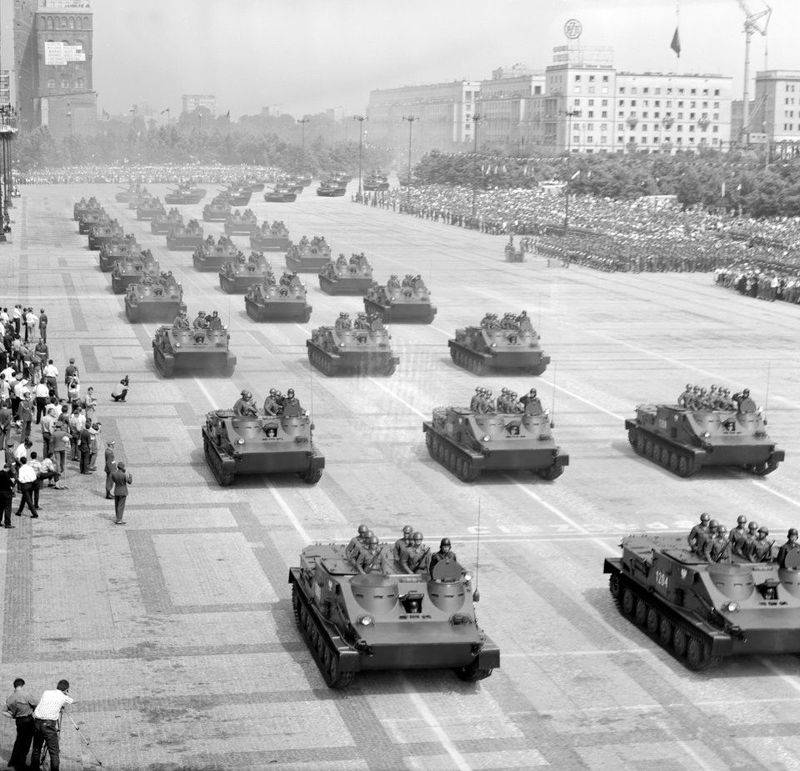 BTR-50PC Polish People's Army
The BTR-50PU and BTR-50PN command-and-staff vehicles also became quite widespread; the production of the first model in Volgograd was launched in 1958. Such a machine could transport up to 10 people, and a desk was set up in the headquarters for working with cards and documents. Also a distinctive feature of the command post vehicle was the presence of a complex of three radio stations P-112, P-113 and P-105. Three four-meter antennas, one 10-tee and one 11-meter antenna became the standard equipment of the combat vehicle. In the process of modernizing machines, the composition of equipment and communications located inside was changing.

Already in the 1970-ies, some of the first serial BTR-50P were converted into technical assistance vehicles (MTP). Such armored vehicles were used by motorized rifle units that received new BMP-1 infantry fighting vehicles. In the modernized armored personnel carriers, instead of the airborne landing, there was an industrial compartment with an armored roof. The height of the compartment was increased, which allowed the repairmen to work at full height. Work tools were transported in the production department, equipment and devices for repair and maintenance of BMP-1 were installed, and there were funds for evacuating the infantry fighting vehicle. And for the installation and installation on the BMP-1 of various components and assemblies on the MTP, a jib crane was placed.

MTP Model
In total, during the serial production from 1954 to 1970, a year in the USSR it was possible to assemble up to 6500 armored personnel carriers BTR-50 of various modifications. This technique remained in service with the Soviet Army until the end of the USSR. Some of these armored personnel carriers can still be stored. At the same time, there is interest in such machines now. For example, the Kharkov plant named after Malyshev still offers options for the modernization of this armored personnel carrier with the installation of new 400 horsepower engines, heavy machine guns, a new gearbox and modified chassis components. The Ukrainian company hopes that the upgraded BTR-50 will be able to interest potential customers from Africa and Asia.

Ctrl Enter
Noticed oshЫbku Highlight text and press. Ctrl + Enter
We are
Heavy tanks of the USSR in the postwar periodExperienced medium tank "Object 907"
45 comments
Information
Dear reader, to leave comments on the publication, you must to register.