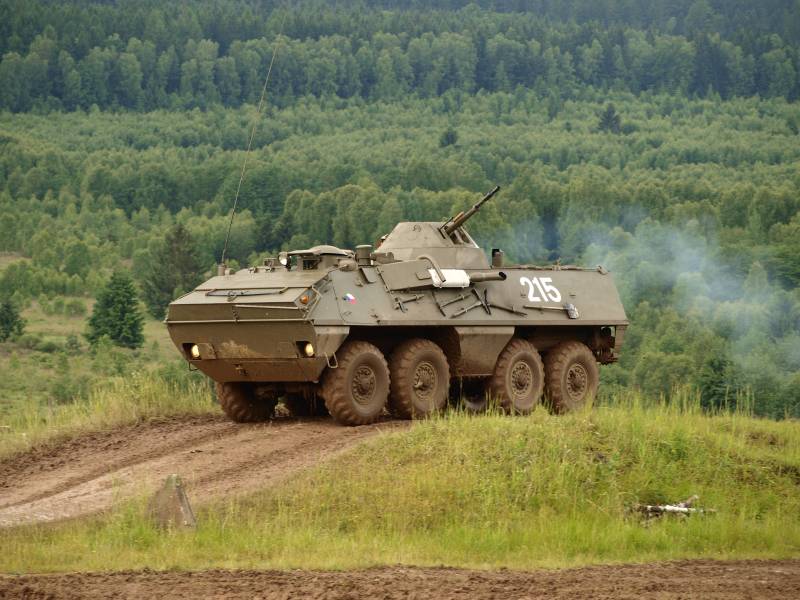 "Combat buses". The most famous armored personnel carrier of the eastern block is considered to be OT-64 SKOT. This combat vehicle was its own view of the wheeled armored personnel carrier of socialist Czechoslovakia and Poland. At the same time, most of the military equipment used by the armies of the Warsaw Treaty countries was Soviet, but some models were also created locally. It would be strange if Czechoslovakia had not used the country's existing industrial potential to produce its own military equipment.

The creation of a wheeled armored personnel carrier with amphibious properties in the countries of the eastern bloc began at the turn of the 1960's. Czechoslovakia's industrial enterprises joined the creation of the new combat vehicle: the Tatra and Prague plants, which were responsible for the development of the chassis and transmission, and Poland, whose enterprises were engaged in the production of hulls and weapons.

It is worth noting that the developed industry of Czechoslovakia, which even before the start of the Second World War managed to arrange the production of a huge range of weapons, including tanks, retained its potential. In the post-war years, the country deployed the assembly of an adapted version of the half-tracked German armored personnel carrier Sd.Kfz. 251, the Czech version received the designation OT-810. From 1958 to 1962, about 1,5 thousand such armored personnel carriers were produced in the country, the main visual difference from which of the German vehicles of the Second World War was the presence of a completely closed hull, there was a roof over the airborne squad. 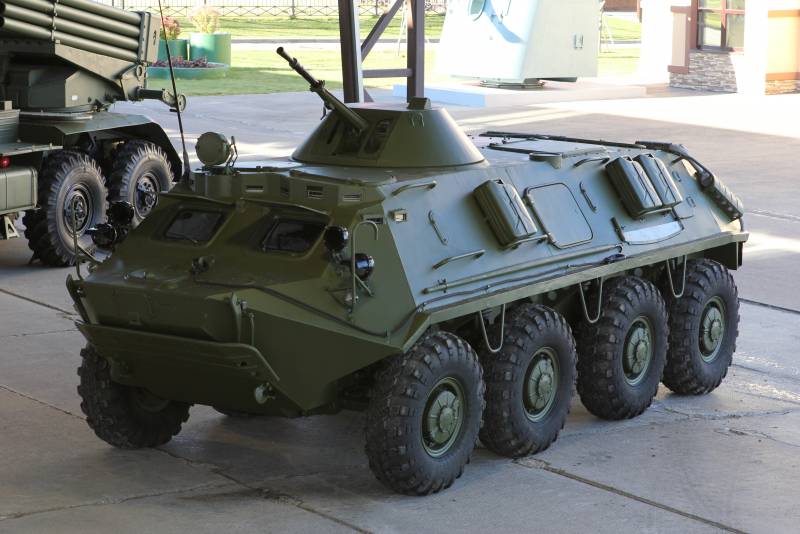 Although the features of the Soviet BTR-60 were guessed in the new armored personnel carrier, even the appearance of the vehicle had noticeable differences. For example, on OT-64 SKOT, the intervals between the first and second and third and fourth axes were equal. There was a greater distance between the second and third axes. At the same time, the aft body armor plate had a backward inclination of the armor, as was realized on the last version of the famous German Sd half-track armored personnel carrier. Kfz 251 Ausf.D. Also, it was in the stern armored plate that the designers arranged the doors through which the motorized riflemen left the airborne compartment. The bow of the combat vehicle was also distinguished, which had a characteristic wedge-shaped shape with a lower armor plate, which was less inclined to the vertical than the upper armor plate. 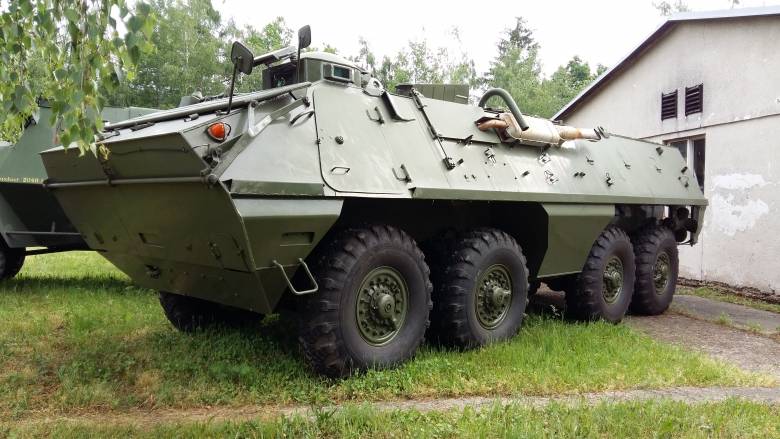 The body of the Czechoslovak armored personnel carrier was produced by welding from steel armored plates with a thickness of 6 to 13 mm, providing the vehicle only with bulletproof armor. For their offspring, designers from Czechoslovakia and Poland chose the following layout. In the front of the case there was a control compartment with the seats of the commander of the car and the driver, who had at his disposal a night vision device. Behind the control compartment was the motor-transmission compartment. In this case, the most part of the middle and aft part of the hull was occupied by the airborne squad. Up to 15 fighters could be accommodated here, one of whom was an operator of weapons and sat on a special height-adjustable chair, the rest sat on reclining benches along the sides of the hull facing each other. To exit, they could use both the rear double door and two large sunroofs in the roof of the car body.

The heart of the combat vehicle was the X-NUMX-cylinder air-cooled Tatra engine model T-8-928 located in the MTO, delivering maximum 14 horsepower. The engine was paired with a semi-automatic gearbox manufactured by Praga-Wilson (180 + 5). The engine power was enough to disperse an APC with a combat mass of 1 tons to a speed of 14,5-95 km / h when driving on a highway, while the cruising range was up to 100 km. An armored personnel carrier moved on the water due to two propellers installed in the rear of the hull, and a special water-repellent shield was located in front of it. The maximum speed of the car on the water was 740-9 km / h. 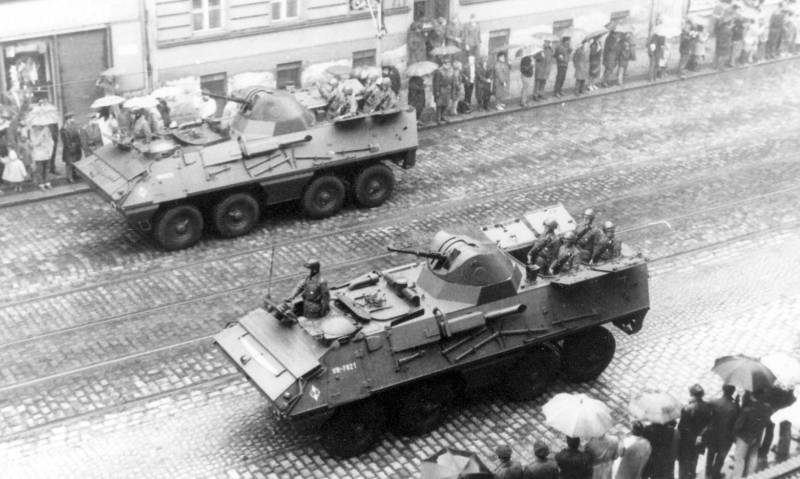 All the wheels of the combat vehicle could be driven, the first two pairs of wheels were steered. In this case, the four-wheel drive was pluggable, the BTR could work in 8x4 and 8x8 modes. A feature of the machine was the presence of a centralized tire pressure control system, which was available to the driver. When changing road conditions, the driver could always change the tire pressure to increase the patency of the car, as well as pumping the wheels as a result of damage, for example, in combat conditions.

The first version of the armored personnel carrier had no weapons and was used only as an armored transporter for transporting infantry. Then, almost all versions began to install a circular rotation tower, similar to the one that was placed on the BRDM-2 and BTR-60PB / BTR-70. The main weapons in this version were the 14,5-mm heavy machine gun KPVT, paired with the 7,62-mm machine gun PKT.

The OT-64 SKOT armored personnel carrier was in all respects a successful combat vehicle for its time. Released by a series large enough for European countries, this all-wheel drive amphibious armored personnel carrier remained in service with the Czechoslovak and Polish army for a long time, and was also in demand on the international arms market. Even during the existence of the Eastern Bloc, it was exported to 11 states, competing with Soviet-made equipment. The second peak of export supplies came already in the 1990 years after the collapse of the socialist camp, when military equipment that was in service with the armies of the Warsaw Pact countries surged for export, which was of interest to many developing countries. 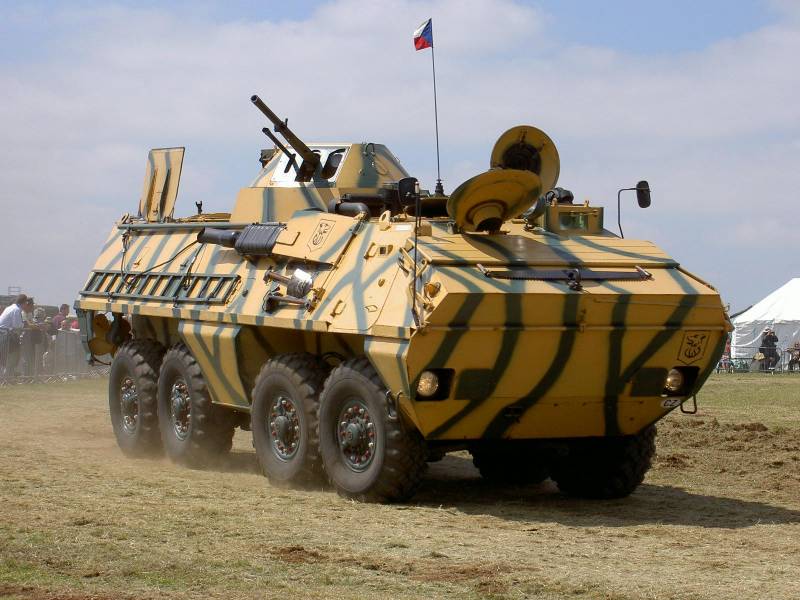 Creating a new combat vehicle, engineers from Czechoslovakia definitely relied on the Soviet experience with the creation of the BTR-60, but managed to make an even more interesting vehicle that surpassed its Soviet counterparts in some respects. First of all, OT-64 SKOT surpassed Soviet cars from a technological point of view. The heart of the armored personnel carrier was a diesel engine, which was borrowed from the Tatra-138 truck. The use of a diesel engine increased the fire safety of the machine. In addition, the Soviet BTR-60 used a spark of two gasoline engines, while the OT-64 had one diesel engine, which reduced fuel consumption and increased cruising range. Another obvious advantage was the simplification of the design of the armored personnel carrier, as well as its maintenance and repair.

The OT-64 SKOT also had the advantage of better armor protection, although the differences in the thickness of the armor plates were not so significant. So the BTR-60 case was assembled from armor plates with thickness from 5 to 9 mm, and the OT-64 case from armor plates with thickness from 6 to 13 mm. At the same time, the OT-64 SKOT was significantly heavier, its combat weight was 14,5 tons against the 9,9 tons of the BTR-60. Also, the armored personnel carrier from the socialist camp was distinguished by large dimensions and a more noticeable silhouette on the battlefield. The height of the armored personnel carrier was 2,71 m (along with the tower) or 2,4 m (on the roof), while the total height of the Soviet armored personnel carrier did not exceed 2,2 meters.

Another advantage of the OT-64 SKOT was its layout with the engine compartment located in the middle of the hull, and not in the stern, like the BTR-60. Such a solution allowed the landing through spacious swing doors in the stern armored plate of the hull. Motorized riflemen leaving the armored personnel carrier were protected from enemy frontal fire by the entire body of the combat vehicle. At the same time, on the BTR-60, as well as on the BTR-70 / 80, due to the implemented layout, the landing is carried out either through the side doors along the sides of the hull or through the hatches located in its roof, while the soldiers are protected from enemy fire much worse. This hereditary design problem, characteristic of the most popular wheeled Soviet / Russian wheeled armored personnel carriers, was eliminated only with the modern Boomerang machine, which is a unified wheeled platform that can also be used as an armored personnel carrier. 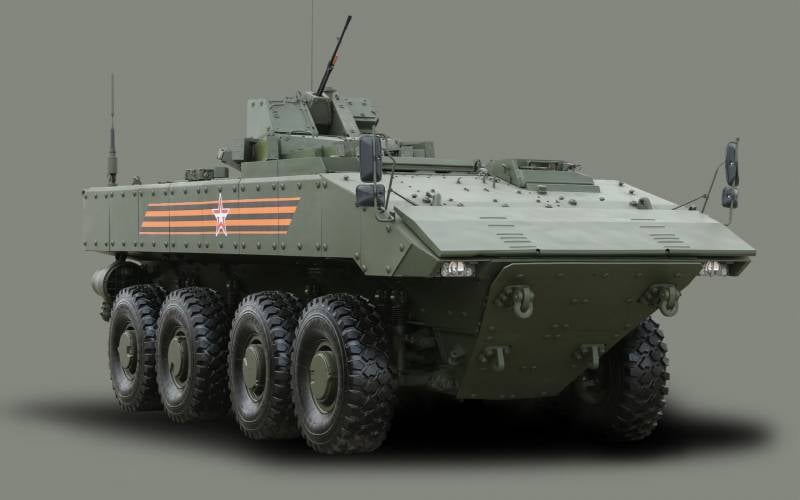 Option BTR on the platform "Boomerang"
Based on the foregoing, we can conclude that the OT-64 SKOT for its time was a fairly successful armored personnel carrier. He was in the arsenal of the countries of the socialist camp for a long time, and also actively promoted for export. It was a simple and reliable amphibious car with high speed and a large power reserve. A small part of the OT-64 armored personnel carriers is still in service with the armies and police structures of a number of developing countries.