BTR Namer: the heaviest armored personnel carrier in the world 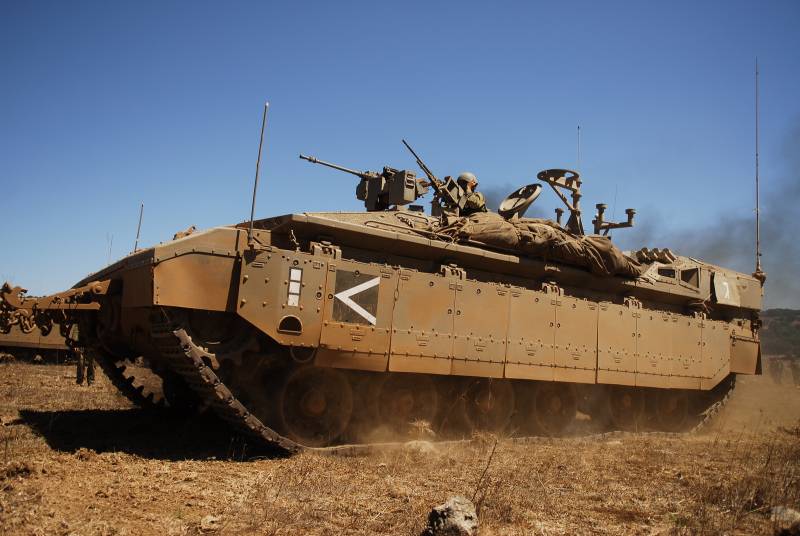 Combat buses. Israel is anxious about the life and health of its military. The country, which is located in the ring of unfriendly Arab states, cannot afford to be scattered by trained military personnel, the most expensive and limited resource for Tel Aviv. It is no coincidence that heavy tracked armored personnel carriers built on the base took root in Israel. tanks. These machines, by their mass, amount of armor and security, have no analogues in the global arms market. Palm by weight and level of protection today belongs to the Israeli armored personnel carrier Namer.

The history of the appearance of the Namer armored personnel carrier

The new combat vehicle was created as a product exclusively of the Israeli defense industry. The main battle tank Merkava was taken as a basis. The first work on a new heavy tracked armored personnel carrier began in Israel in 2004, and already in 2005, the first armored personnel carrier built on the chassis of the Mk1 tank was presented to the military for testing. The car was originally called Namera. Translated from Hebrew - a female leopard, but later the name was changed. 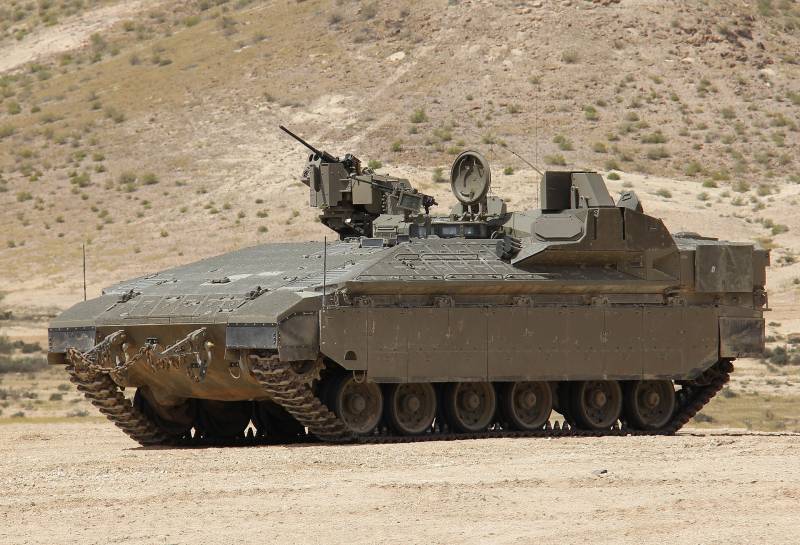 Already in 2006, the Israeli army decided to start mass production of a new armored personnel carrier. The first armored personnel carriers entered service in 2008. At the same time, deliveries are carried out rather slowly, given the high cost of armored vehicles. In total, up to 130 units were manufactured. And in the future, their number in the IDF is planned to be increased to at least 500 pieces. At the same time, no more than 30 such military vehicles were produced in Israel for a long time a year, but in 2016 they decided to double the production of armored personnel carriers. In the future, they should completely replace the M113, which is still operated by the Israeli military. 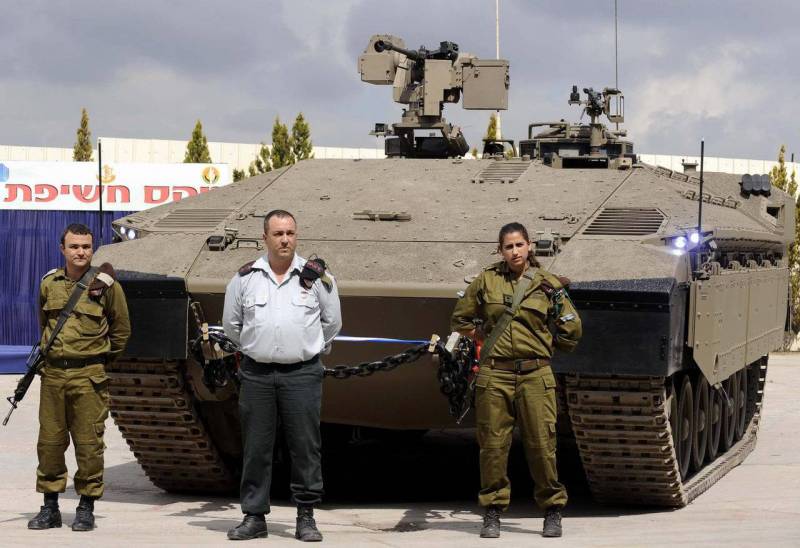 The Namer armored personnel carrier has a classic layout for its class. An engine is located in front of the hull, behind it are the workplaces of the crew of a combat vehicle, consisting of three people: commander, driver, and weapons operator. This is followed by the landing squad, designed to transport 8-9 soldiers in full gear. To exit the APCs they use a descending ramp with a hydraulic drive in the stern of the combat vehicle. The crew leaves the combat vehicle through hatches in the roof of the hull.

The main feature of the Israeli Namer armored personnel carrier is the level of protection that is unattainable for vehicles of this class. The armored personnel carrier built on the basis of the Merkava tank was specially adapted for the transport of soldiers with the highest possible level of protection. Weight gain from dismantling the turret with cannon armament went to strengthen the reservation of the combat vehicle. According to Israeli general Yaron Livnat, the armored personnel carrier has a heavier reservation than the Merkava Mk 4 tank, on the basis of which it was built. The total weight of the Namer combat vehicle exceeds 60 tons. 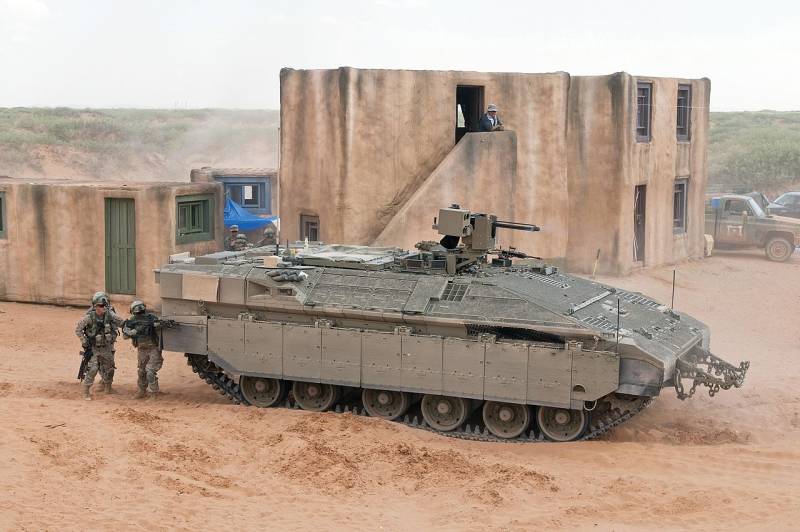 As the main weapons on the Israeli "Leopards" installed remote-controlled weapon module Katlanit (RCWS). Usually it is equipped with a large 12,7 mm M2HB Browning machine gun (200 rounds of ammunition), options are also available with the installation of a single 7,62 mm FN MAG machine gun or a 40 mm Mk automatic grenade launcher. 19. In addition, a 7,62 mm FN MAG machine gun with manual control can be mounted on the hatch of the armored personnel carrier commander on a special pin support. On the sides of the APC in the aft part there are six-barrel launchers for firing grenades.

The remote-controlled combat module has a modern combined sight with a thermal imaging camera. As noted by the Israeli military, the installed thermal imager is a very worthy solution, since it allows you to recognize a person at a distance of up to 2,5 km. And here the scope capabilities are already superior to the capabilities of the 12,7 mm M2HB machine gun. This machine gun is already too old and is not the most effective weapons, especially at such a battle range. In Israel, they are working to create an uninhabited turret with cannon weapons. 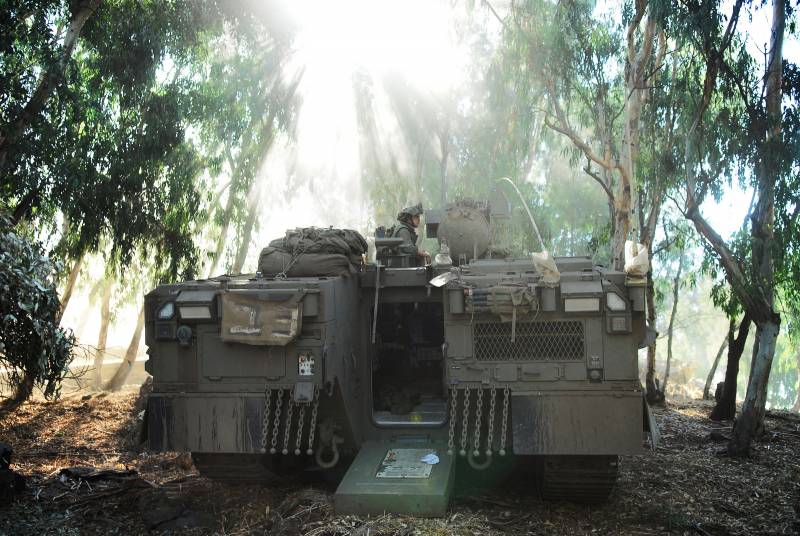 Namer got a desert tower

One of the latest upgrades of the Namer armored personnel carrier is a variant with an uninhabited turret, which houses the 30-mm automatic gun Mk44 Bushmaster II, which today is presented on many models of military equipment. With such a composition of weapons, the combat capabilities of the machine significantly increase. At the same time, the armored personnel carrier already claims to be a BMP niche, while at the same time its capabilities for transporting troops have not diminished. The tower is remotely controlled and uninhabited, it has no crew, and there is no turret compartment and other systems in the body of the combat vehicle, so the useful volume of the airborne compartment was not affected in any way.

A model with cannon armament hit the camera lenses in early 2017. In addition to the automatic cannon, a 7,62 mm machine gun coaxial with it is installed in the turret, and there is also a 60 mm mortar, similar to those that began to be installed in the towers of the Merkava tank, starting with the Mk2 version. 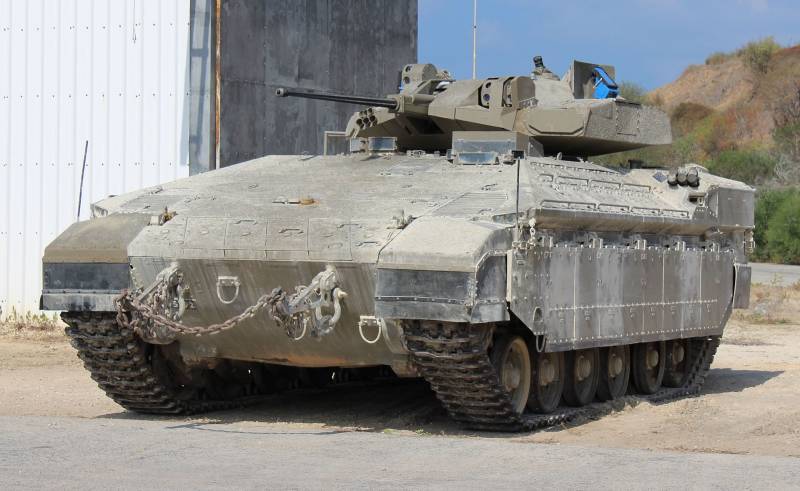 Another option for enhancing the combat capabilities of the Namer armored personnel carrier is to deploy modern anti-tank systems on the machine. In 2018, Israel published videos of launches of anti-tank guided missiles of the Gil complex, which are included in the uninhabited combat module of an armored personnel carrier. Their distinctive feature is that the launcher is hidden in the tower and rises only at the time of launch. This placement option protects the ATGM from being hit by fragments of shells and mines, as well as bullets and small-caliber shells. If the crew detects a suitable target, the container with ATGM simply rises from a specially organized niche, and after the shot is again hidden in the hull.

We are in Yandex Zen
Is the old well forgotten to become the new? Part-2. By call of honor and duty
Heavy Israeli armored vehicle "Ahzarit"
162 comments
Information
Dear reader, to leave comments on the publication, you must to register.