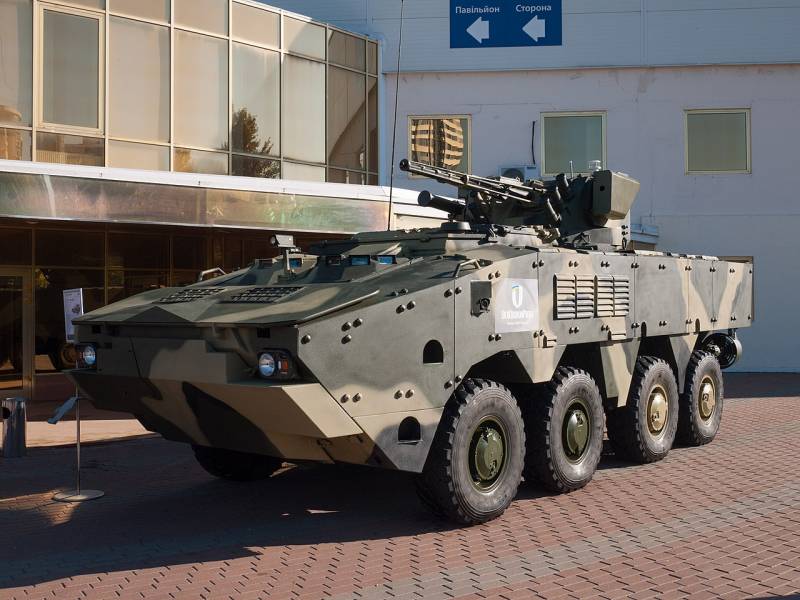 BTR-4MV1 with the combat module "Sail"

The first version of the BTR-3 was a simpler project, representing a further modernization of the BTR-80. Ideologically, he is close in everything to the Russian serial armored personnel carrier BTR-82A. The second option is more complex and promising - BTR-4 "Bucephalus". The family of these Ukrainian armored personnel carriers has been developed and is the basis for the creation of a large number of models of different wheeled military equipment. This is due to a new approach, a change in layout and the use of a modular design that allows you to quickly and painlessly create machines for various combat missions.

Numerous newsrelating to marriage, malfunctions or breakdowns of the BTR-4 are in no way connected with the design of the machine itself, and especially with the work of Kharkov designers. The main problem of the armored personnel carrier is the weakness of Ukrainian industry, a low production culture and chronic underfunding. The Ukrainian defense industry is still not able to mass-produce such armored personnel carriers in commercial quantities. At the same time, the armored personnel carrier, of course, is in demand both by the Ukrainian military and foreign customers. On the international market, it can compete with Russian wheeled armored vehicles, primarily with its price and the best set of characteristics. 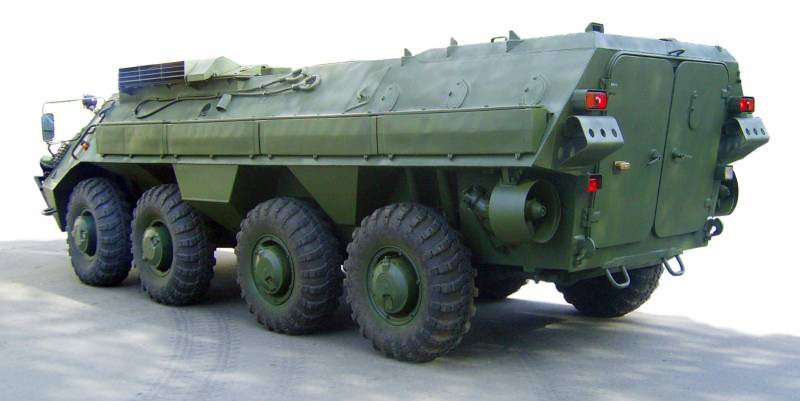 The layout and construction of "Bucephalus"

In addition to motorized rifle units, the machine can be used by marines and special forces. The presence of modern equipment, primarily thermal imaging devices, allows the use of the BTR-4 for solving combat missions both in the daytime and at night. It can be used in various climatic conditions at air temperatures from -45 to +55 degrees Celsius (standard requirements for military equipment created in the post-Soviet space). The machine has sufficient cross-country ability for off-road operations, including in conditions of complete impassability.

The manufacturer relates the BTR to a new generation of wheeled armored vehicles. Indeed, in comparison with the Soviet legacy, work was carried out on the re-arrangement of the entire internal reserved space of the machine and the transition to Western standards for such equipment. The convenience of accommodating the crew and the landing was given increased attention. The BTR-4 Bucephalus is divided into three sections: 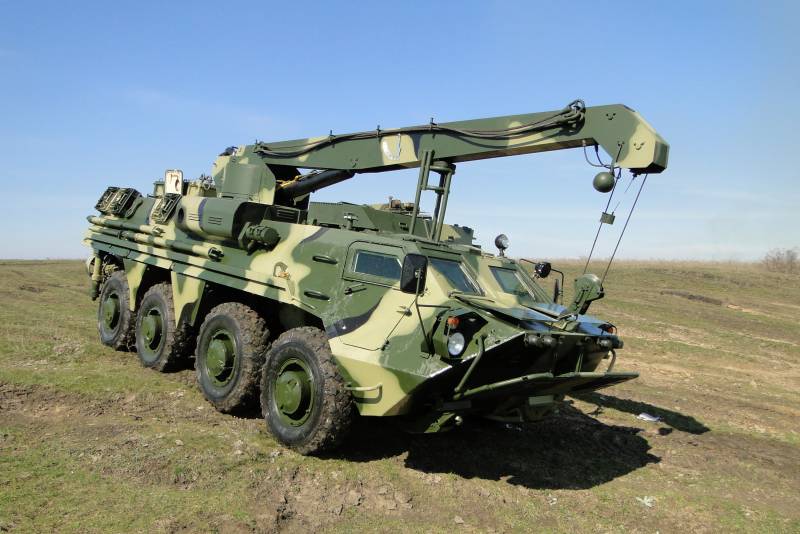 BREM-4RM
The use of the new layout scheme provides the ability to quickly transform the combat and airborne compartment of the combat vehicle without changing the layout and implemented solutions for the transmission and power plant, which opens the way for creating a large range of various combat vehicles based on the standard BTR-4 armored personnel carrier. Also, the implemented layout solutions made it possible to provide the safest of all possible landing methods. Soldiers leave the APC through a double-wing door in the stern of the combat vehicle hull. This solution provides maximum protection for soldiers from frontal fire, and also paratroopers can use hatches located in the roof of the hull to exit.

The layout solutions and the BTR-4 design allow without significant changes to make modifications to the armored personnel carrier, which differ in the set of installed weapons (4 combat modules are already available), as well as the level of protection. Various solutions make it possible to use Bucephalum in different roles: both as an armored vehicle for transporting a motorized rifle compartment, and as a wheeled infantry fighting vehicle. At the same time, the designers note that the large useful volume of the BTR enclosure provides the ability to install various equipment inside to create auxiliary equipment or support machines.

Already now, on the basis of BTR-4, the following have been created: the BTR-4KSh command and staff vehicle, the BTR-4K command vehicle, the BREM-4RM armored repair and recovery vehicle, the BMM-4 armored medical vehicle, and the BRM-4K combat reconnaissance vehicle . There are also options with heavy weapons - the installation of a 120-mm mortar. 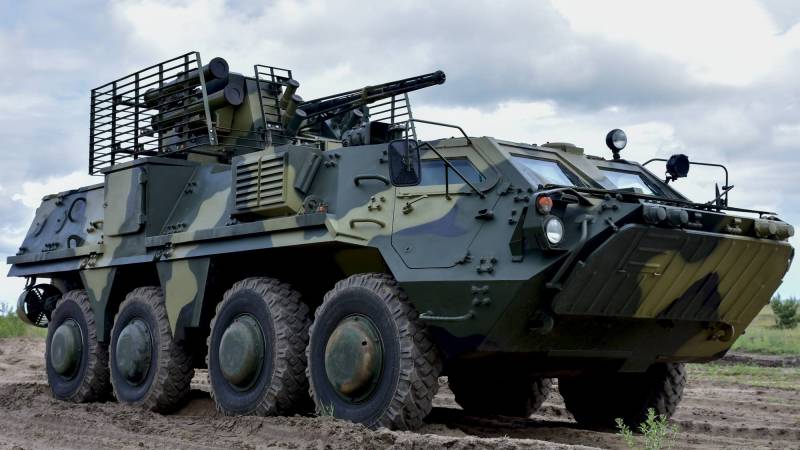 The new Ukrainian armored personnel carrier, developed in Kharkov in the early 2000s, has an 8x8 wheel arrangement and is an all-wheel drive car, which, at the request of the customer, can be equipped with various power plant options. Three main options are available: Ukrainian 3TD engine, Italian Iveco or German Deutz. Three-cylinder diesel engines 4TD-3 with a volume of 3 liters are installed on serial Ukrainian BTR-8,15 "Bucephalus". Such an engine develops a maximum power of 500 hp, providing the armored personnel carrier with a maximum speed of 110 km / h when driving on the highway, and up to 60 km / h on rough terrain. Cruising on the highway - at least 690 km. The armored personnel carrier has kept buoyancy and can move through water at a speed of up to 10 km / h.

The increased off-road patency is provided by the ground clearance of 475 mm. The BTR-4 armored personnel carrier itself is distinguished by the following geometric dimensions: body length - 7760 mm, height - 2860-3200 mm, width - 2932 mm. The maximum allowable roll angle is 25 degrees, the maximum lift angle is 30 degrees.

The combat weight of the machine has grown significantly compared to the Soviet BTR-60/70/80, which have weak bulletproof armor. As standard with bulletproof armor providing circular protection according to standard 2 STANAG-4569 from 7,62 mm armor-piercing bullets, as well as fragments of 155 mm high-explosive fragmentation shells at a distance of 80 meters, the BTR-4 combat weight is 17 tons, s installed combat module mass increases to 20 tons. At the same time, with an enhanced reservation option that provides protection against shells of 30-mm automatic guns (in frontal projection), the combat weight of the vehicle increases to 25-26 tons. It is important to understand that currently serial BTR-4 have numerous problems with the hulls, including in the form of cracks. Also, armor steel itself often does not meet the declared parameters, Ukrainian media also regularly write about this. 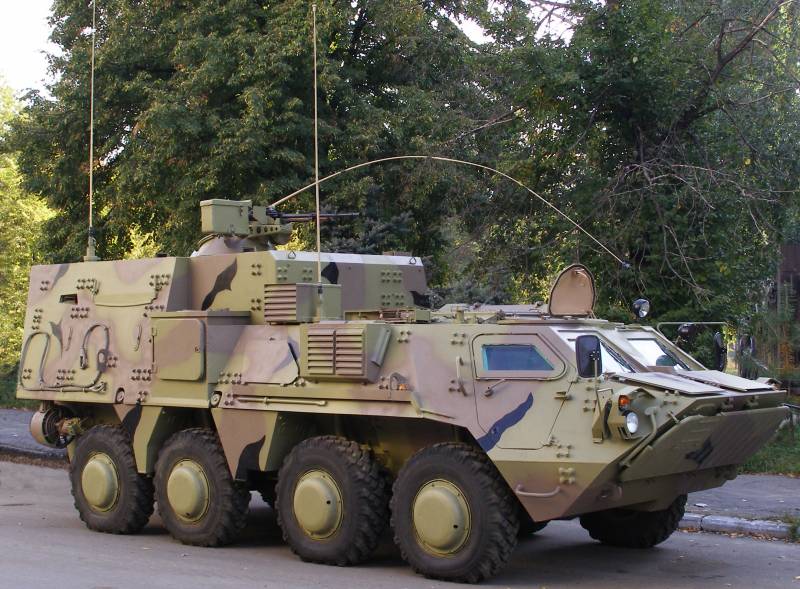 Command and staff vehicle BTR-4KSh
For comparison: the standard Soviet / Russian armored personnel carrier BTR-80 has a combat weight of 13,6 tons, no additional booking options are provided for it. The BTR-82A with a combat module equipped with a 30-mm automatic gun weighs 15,6 tons and also cannot boast of any serious level of armor protection, preserving the old BTR-80 body. In this regard, the Ukrainian armored personnel carrier provides a fundamentally different level of protection for the crew and the landing force (while improving the culture and quality of production) than the Russian production models. The situation can be corrected only by the production of a fundamentally new armored personnel carrier based on the Boomerang wheeled platform.

Depending on the modification, the BTR-4 can take on board 7-9 paratroopers, the crew of the armored personnel carrier is 2-3 people (a machine commander, a driver, if there is a combat module - an archer-operator of weapons). On the sides of the hull there are loopholes with armored shutters for firing from personal weapons. Inside the body are individual seats of paratroopers, which are attached to the roof of the combat vehicle. They can be located either in the center of the machine, or along the sides opposite each other. These seats are quick-detachable, which makes it easy and efficient to transform the airborne squad for solving various problems, including for transporting military cargo. 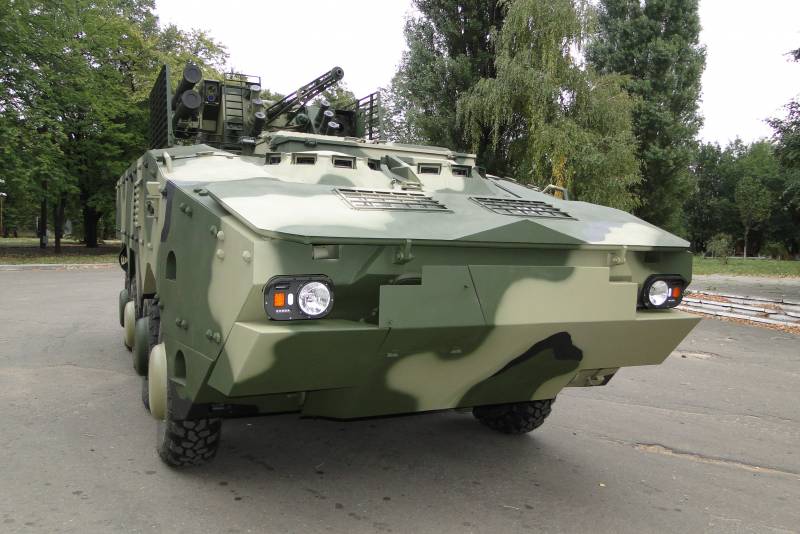 BTR-4MV
The most modern version of the armored personnel carrier is the BTR-4MV, the combat mass of which, depending on the level of protection, ranges from 21,9 to 23,55 tons. As standard, the armor withstands hit by 12,7 mm bullets in the frontal projection. From other options, this modification differs by changing the shape of the case. The frontal part of the armored personnel carrier was substantially redesigned, which allowed to significantly improve protection in the frontal projection. The BTR-4MV model, which was first introduced in 2013, lacks bulletproof glass and side doors of the driver and armored personnel carrier commander, landing of which is now carried out through hatches. In 2017, the BTR-4MB1 version was first introduced, which received additional ceramic armor. Also, on the BTR-4MV models, a full fodder ramp for landing has appeared on the back.

The armament of an armored personnel carrier BTR-4 may differ; for this model, the Ukrainian defense industry has already developed four combat modules. We are talking about combat modules "Thunder", "Flurry", BM-7 "Sail" and BAU-23-2. The simplest is the last module, which is two 23 mm 2A7M automatic guns, providing a maximum rate of 850 rounds per minute. Ammunition module 200 shells, an additional 7,62 mm PKT machine gun with an ammunition load of 2000 rounds is installed.

More interesting are the modules "Thunder" and "Flurry", which received anti-tank systems to combat the main combat tanks the enemy. The main armament of the Grom module with external armament is the 30mm ZTM-2 automatic gun (analogous to the Russian 2A42), the 30mm AG-17 automatic grenade launcher and the 7,62mm KT-7,62 machine gun coaxial with the gun. Also on the module are 4 ATGM 9M113 "Competition" or "Barrier". The Flurry module also has a 30-mm automatic cannon coaxial with a 7,62-mm machine gun, but we are talking about the ZTM-1 gun (an analogue of the Russian gun 2A72, placed on the BTR-82). It is also possible either to mount 4 Barrier anti-tank systems, or instead of two anti-tank missiles, a 30-mm automatic grenade launcher is installed. 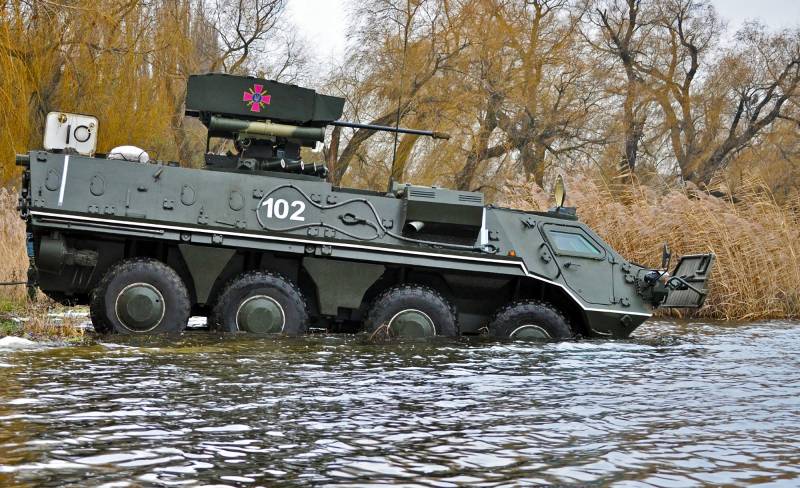 Ctrl Enter
Noticed a mistake Highlight text and press. Ctrl + Enter
We are
Armament of domestic armored personnel carriersFamily BTR-60 / 70 / 80 in combat
57 comments
Information
Dear reader, to leave comments on the publication, you must to register.