Smoky Leopard. Wheel BTR of the Republic of China 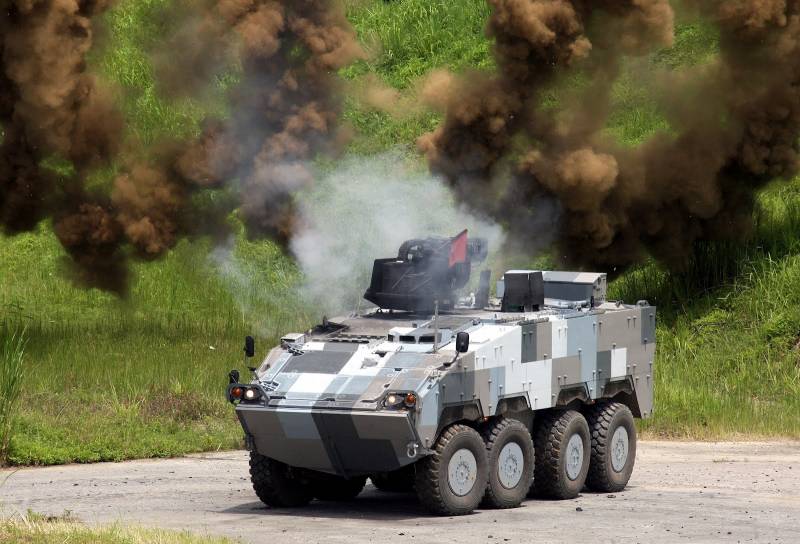 Combat buses. Taiwan, which is separated from mainland China by the Taiwan Strait up to 150 kilometers wide, has become the last refuge of the Kuomintang government. The loser in the Chinese Civil War, Generalissimo Chiang Kai-shek took refuge on an island that today is a partially recognized state. Today, Taiwan (officially: Republic of China) is a highly developed state with a strong economy.

At the same time, the PRC still claims to this territory and does not recognize the sovereignty of the Republic of China. In such a situation, the island state is forced to develop its armed forces, focusing on coastal defense. For a long time, the United States has acted as the guarantor of Taiwan's security, which has committed itself to ensuring the island’s security. In many ways, this cooperation extends to the supply of weapons and military equipment. For example, the basis of the air force fleet of the Republic of China today consists of F-16 fighters of various modifications. The same goes for the naval fleet. At the same time, the island has a developed industry, which is able to mass-produce adapted versions of various weapons and work on its own projects. One of the successful examples of organizing its own production is the CM-32 Clouded Leopard ("Smoky Leopard") and a family of wheeled combat vehicles built on its basis.

Smoky Leopard is a further development of the project of the small Irish company Timoney Technology Limited and an improved version of the BTR CM-31, which is fully adapted for production in the territory of the Republic of China. It is worth noting that the small in size and number of employees Irish engineering company is behind the creation of a large number of wheeled armored vehicles around the world. 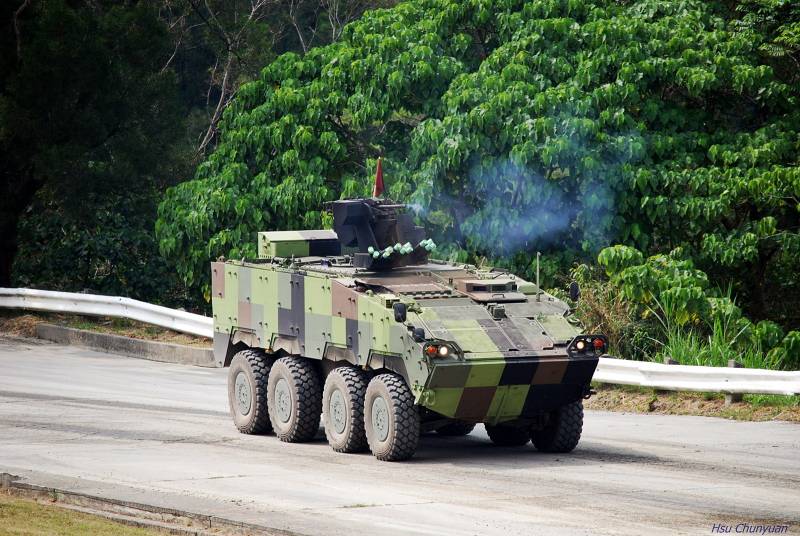 The main specialization of the company is the development of wheeled armored vehicles, transmissions, and chassis. In addition to Taiwan, the company worked with Singapore, offering a small country its own version of the Terrex wheeled armored personnel carrier, which is produced in Singapore by STK. This machine took part in the Australian tender. Also, the Singapore company STK created, together with the Turkish company Otokar, a version of the four-axle armored personnel carrier for the Turkish armed forces - AV-82 (Yavuz). The legs of all these projects grow precisely from Ireland.

Today, the Irish company Timoney is working with a large number of manufacturers of armored vehicles around the world. The customers of this company are such giants as Lockheed Martin (Amphibious Combat Vehicle 1.1 armored personnel carrier), Emirates Defense Technology (Enigma modular armored car), Russian KamAZ (Typhoon armored vehicles family), Jygoimport-SDPR Serbian company (Lazar armored personnel carrier), Taiwan and the SM-32 Cloud Leopard BTR. These are far from all projects of the Timoney Technology Limited company, 25 percent of the shares of which are owned today by Singaporean company STK (Singapore Technologies Kinetics). For example, for the Russian Typhoon armored car, Irish specialists designed bridges, a transfer case and an independent suspension.

At one time, Taiwan lagged behind its neighbors, primarily China, in the production of its own armored vehicles. Over time, the military of the Republic of China simply had to tackle this problem. The country's army needed modern armored vehicles, while not all countries were ready to directly cooperate with Taiwan. The experience of cooperation with the Irish company Timoney Technology Limited resulted in the creation of an armored personnel carrier CM-31, originally with a 6x6 wheel arrangement. In the future, the project was "finished" already on the island, presenting its own version of the CM-32. The ORDC (Ordinance Readiness Development Center) of the Army of the Republic of China was responsible for fine-tuning the machine. Serial production was established at the Chung Hsin Electric & Machinery factory in Taoyuan. 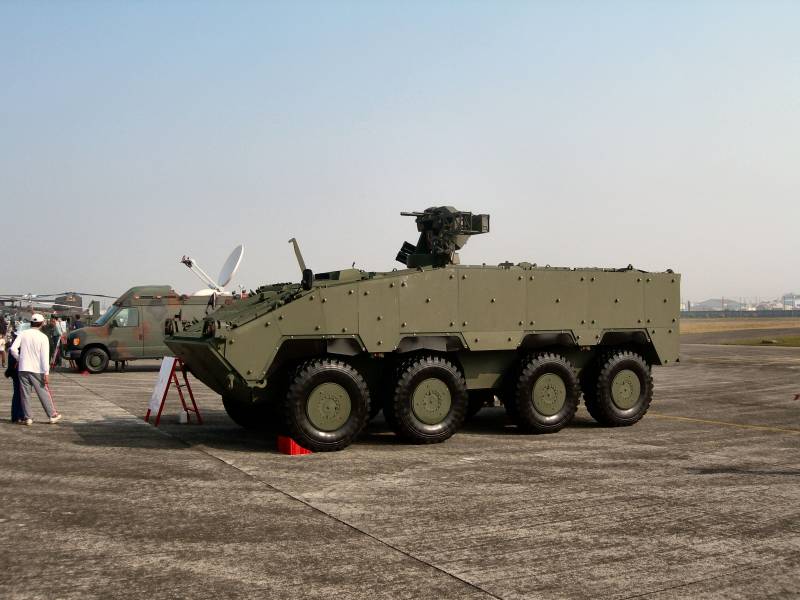 The new armored personnel carrier of the army of the Republic of China became the country's first such vehicle with an 8x8 wheel formula. The development is quite successful and served as the basis for the creation of a wide variety of combat vehicles, including infantry fighting vehicles with full-fledged artillery weapons in the inhabited tower: options with a 20-mm automatic gun and a 30-mm automatic gun Bushmaster II are presented. There is also a modification in the form of a wheeled tank or wheeled combat vehicle with heavy weapons, received a 105-mm rifled gun. We consider options for creating self-propelled mortars - 81 mm and 120 mm, and even a variant of a wheeled self-propelled guns armed with a 155 mm artillery mount.

Serial production of new armored personnel carriers began in Taiwan in 2007. During this time, local enterprises transferred to the military about 662 wheeled chassis in various versions, most of them in the BTR version. Modernization of these combat vehicles and further developments to improve them continue today. In particular, it is known about work on the Clouded Leopard II armored personnel carrier. In total, the Taiwanese army expects to get up to 1400 different combat vehicles on this chassis with an 8x8 wheel formula.

The new army vehicle of the Republic of China received its name in honor of the smoky leopard. Officially, the machine is called CM-32 Yunpao (Clouded Leopard), which should demonstrate that the armored personnel carrier is just as nimble and fast. In the Republic of China’s army, a new armored personnel carrier should replace obsolete wheeled armored vehicles, as well as a tracked SM-21, which is a local version of the American M113 armored personnel carrier. The supply of new combat vehicles to the troops should increase the mobility of motorized rifle units and strengthen their firepower. The initial contract for the supply of armored vehicles was placed back in 2006, but they are in no hurry with the construction of military vehicles on the island, it is expected that all deliveries will be completed in full only by 2023. 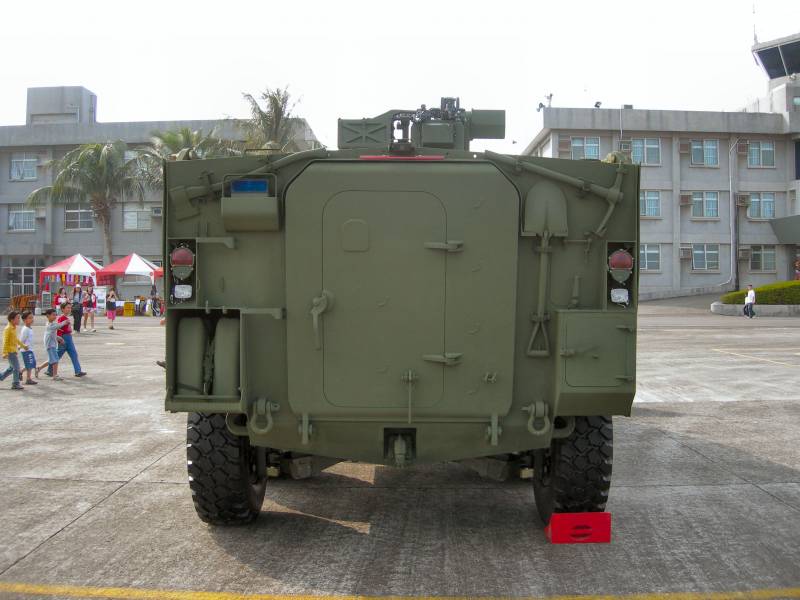 Like many modern armored personnel carriers, the CM-32 looks similar to all models at once. It is easy to guess in it both the American Stryker, and the Swiss MOWAG Piranha, and the Singapore Terrex, and the Russian "Boomerang", which can not get to the stage of mass production, although the Russian fleet of wheeled armored vehicles has long been in need of a radical update. The similarity of these combat vehicles is explained by the same requirements of the military and the tasks they solve.

The CM-32 armored personnel carrier has a typical layout for vehicles of its class with a front-mounted control and engine compartment. The power plant is separated from the driver’s seat and the landing by a special protective partition. The place of the mechanical drive is on the left, a diesel engine is installed on the right side of it. The entire middle and rear part of the APC is occupied by the airborne squad combined with the fighting squad. The landing is carried out through the aft ramp, which also has a door. In addition, the landing can use to exit the hatches located in the roof of the hull. Loopholes for firing from the airborne squad are not provided.

The combat weight of an armored personnel carrier with an 8x8 wheel formula is approximately 22 tons. At the same time, almost all of the CM-32 combat vehicle variants presented today carry additional mounted armor. The frontal sheets of the hull are located at rational angles of inclination, the sides of the hull and feed are located vertically. The designers provided circular protection against armor-piercing bullets of 7,62 mm caliber; in the frontal projection, an armored personnel carrier withstands shelling with 12,7 mm armor-piercing bullets. Most likely, due to the widespread use of hinged armor, car booking indicators have been improved. 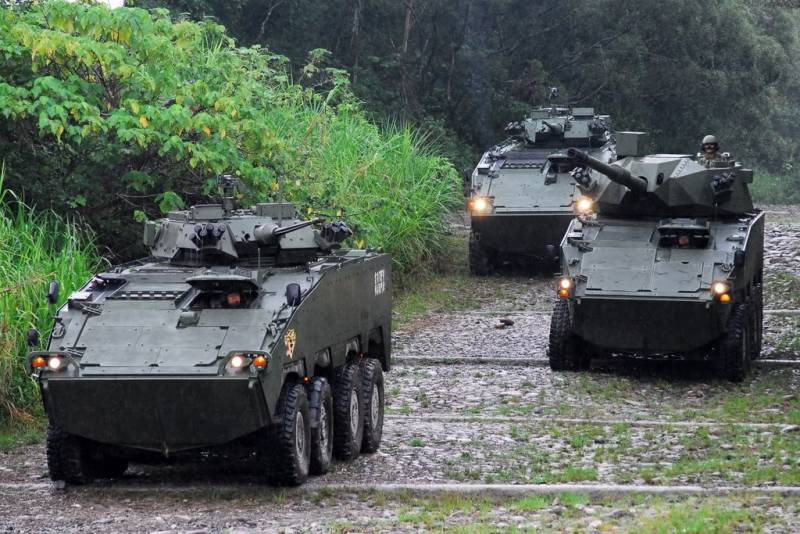 Wheeled infantry fighting vehicles and wheeled tank with a 105-mm gun based on CM-32
A distinctive feature of all “Smoky Leopards” is the V-shape of the bottom of the hull. The BTR was originally developed with enhanced mine protection. The level of mine protection ensures the survival of the crew and the landing forces if a self-made explosive device with a power of up to 12 kg TNT is blown under any wheel of an armored personnel carrier. The case itself is quite spacious. The standard loading option for an armored personnel carrier: two crew members and 8 landing personnel. In the wheeled BMP version, the crew consists of three people, the landing is reduced to 6 people.

The length of the armored personnel carrier is 6,35 meters, the height on the roof of the hull is 2,23 meters, and the width is 2,7 meters. The combat weight is 22 tons. The machine is able to overcome ditches and trenches up to two meters wide, to climb walls up to 0,7 meters high. Thanks to the fairly powerful Caterpillar C12 diesel engine with a capacity of 450 liters. from. and high specific power (more than 20 hp per ton), the armored personnel carrier has good dynamics. The maximum speed on the highway reaches 110 km / h, the power reserve is 800 km.

We are in Yandex Zen
Family BTR-60 / 70 / 80 in combat
BMP Smoky Leopard CM-32
14 comments
Information
Dear reader, to leave comments on the publication, you must to register.