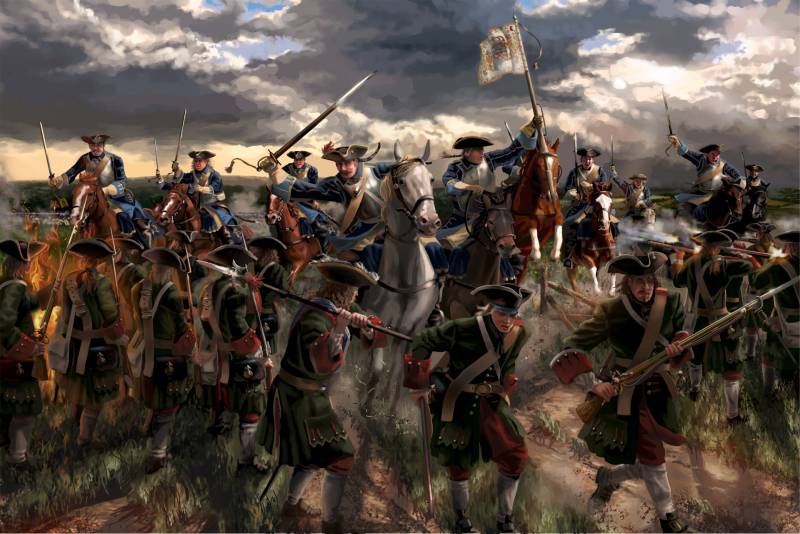 Time goes by, you can't forget about it
We must not live our youth in vain,
Bravely in love
Catch happiness
Remember that you are not without reason
You are called a hussar.
Time goes by, it won't wait for us,
We are not given to live our lives twice.
Remember, hussar:
Do not expect happiness
Happily go to meet!
Operetta "Princess of the Circus". Lyrics: J. Eichenwald, O. Kleiner

Military affairs at the turn of the eras. So, last time we stopped at the fact that at the turn of two eras, namely the 1812th and XNUMXth centuries, in different countries of Europe, almost simultaneously, old cuirassiers were replaced by completely new ones, Polish plate "winged" hussars disappeared, and in general they began to wear armor not fashionable, so at times even the cuirassiers did not have them. So it was on the eve of the war of XNUMX in Russia, but the Saxon cuirassiers did not receive cuirassiers and ... and so they were cut with Russian cuirassiers in the rye on the Borodino field without cuirasses! And at the same time, many varieties of lighter cavalry appeared, which did not have any protective equipment at all and heavy horses, which at least were among the Saxons and which operated on the flanks of the heavy cavalry, and in the rear of the enemy, and even on foot, like infantry. And someone even threw hand grenades, which, however, they quickly abandoned due to the imperfection of this weapons... And in European countries, national cavalry units appeared, many of which proved themselves so well that they soon turned from national to international ones, like, for example, all the same hussars. And some of them remained as national formations. It was so. And we will continue our today's story about this light cavalry.

Today, on the map of Europe, there is such a state as Bosnia and Herzegovina (which until 1992 were part of Yugoslavia). Residents of the Muslim faith are called Bosnians. They were originally Christians, but converted to Islam after Turkish rule was established in Bosnia in the late XNUMXth and early XNUMXth centuries. They did this in order to preserve their land ownership and privileges. True, it was required to pay for this, sacrificing not only faith, but also life. The fact is that in feudal Turkey, anyone who owned land was obliged to go into military service in case of war, so the Bosnians served in all Turkish armies of that time.

In 1740, the War of the Austrian Succession began. The Prussian king Frederick wanted to annex the rich province of Silesia, but Austria opposed this, which was a sufficient reason for war. At the very beginning of the war, known as the First Silesian War, Saxony was on the side of Prussia, but decided to change her. Preparing for a possible continuation of the war, the emissaries of the Saxon Elector in 1744 were sent to Ukraine to recruit people for the Saxon cavalry. The reaction of the Cossacks turned out to be negative, but they still managed to lure out of the Turks about 100 Bosnians - light horsemen armed with spears who guarded the Turkish border in Ukraine. So the Bosnians ended up in Dresden. But there they were met by emissaries from Prussia and promised them more than the Saxons, and the Bosnians ... went to Prussia. In 1745, Frederick founded a regular Bosnian corps, one of which became part of the 5th Hussar Regiment, also known as the Black Hussars (Totenkopf), symbolized by the famous “death's head”.

The hostilities continued during the Second Silesian War and ended in 1748, but the Bosnians remained in the service. In 1756, for the same reasons, a new war broke out between Austria and Prussia, the Seven Years. Its scale was such that it led to an acute shortage of human resources and forced Frederick to recruit soldiers on the side, whatever, anyone. Light horsemen from the east (Poles, Lithuanians, Tatars), all came to the court of the great Frederick and were included in the Bosnian cavalry, which by 1760 had grown to 10 squadrons. In the same year, the Bosnians became a regular light cavalry regiment in his army at No. 9. 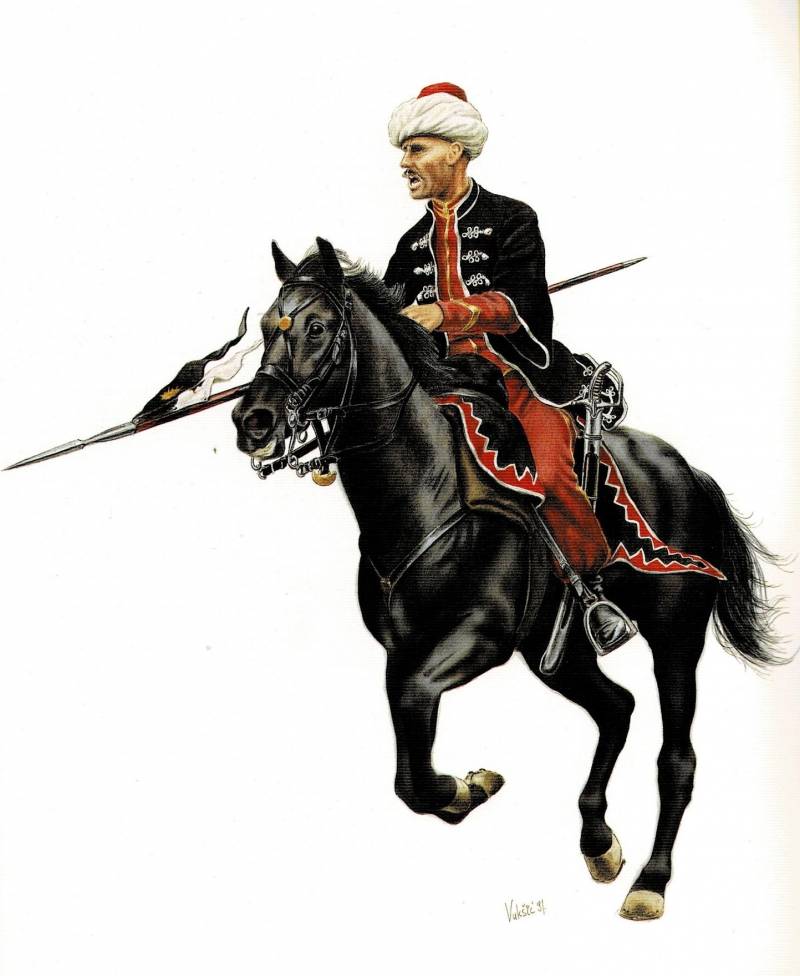 Prussian Bosnian spearman 1760 Fig. from the book: V. Vuksic, Z. Grbasic. Cavalry. The history of fighting elite 650BC - AD1914. L .: Cassell, 1994. P.169
After the end of the war in 1763, the regiment was disbanded, but one squadron was kept from it for ceremonial purposes. In 1778 another war broke out between Prussia and Austria, this time over Bavaria. The Bosnian Corps was again replenished to 10 squadrons, mainly with recruits from Ukraine and Poland. In this war, in which there were no major battles, the Bosnians suffered heavy casualties as a result of surprise attacks by the Austrian hussars.

When, by the end of the 15th century, Poland disappeared from the map of Europe (one part was annexed by Russia, another by Austria, and the third by Prussia), Prussia recruited XNUMX Polish squadrons of light horsemen, who also fell into the "Bosnians". But these horsemen were Bosnians in name and costume only.

Alas, adults very often (both before and now!) Behave like little children. They will see a neighbor's toy and begin to whine: "And I have the same one." So in Sweden, which entered into frequent conflicts with Russia over control of the Baltic in the XNUMXth and XNUMXth centuries, military experts decided that their army could not conduct serious operations without the support of light cavalry, especially against an enemy with ten hussar regiments. This means that the Swedes also need hussars. And the Swedes brought them in!

In December 1757, the government signed a contract with Captain Count Frederick Putbuss and Lieutenant Philip Julius Bernhard von Platen, obliging each of them to recruit two hussar squadrons of 100 people. The following year, another contract was signed, this time with Major Baron Georg Gustav Wrangel, on the recruitment of a hussar regiment from ten squadrons with a total strength of 1000 people. It was formed in Rügen and was named the Kungliga Husarregementet (Royal Hussars). Since it was formed in a German-speaking province, the language of official communication and command in it was German, and the Swedish hussars were trained according to the Prussian charter, because how could they get their own!

The famous Prussian Marshal of the Napoleonic Wars Count Blucher (1742-1819) served for some time in the Swedish hussars. Fifteen-year-old Blucher was with his son-in-law in Rügen, and when the Swedish hussars were sent to Pomerania, the young cadet Blucher somehow fell into their number. In 1760 he was taken prisoner by the Prussian hussars from the eighth regiment, who recruited him into their ranks. And here he is, the finger of fate: after serving 49 years, Blucher became his commander at the Battle of Jena in 1806. 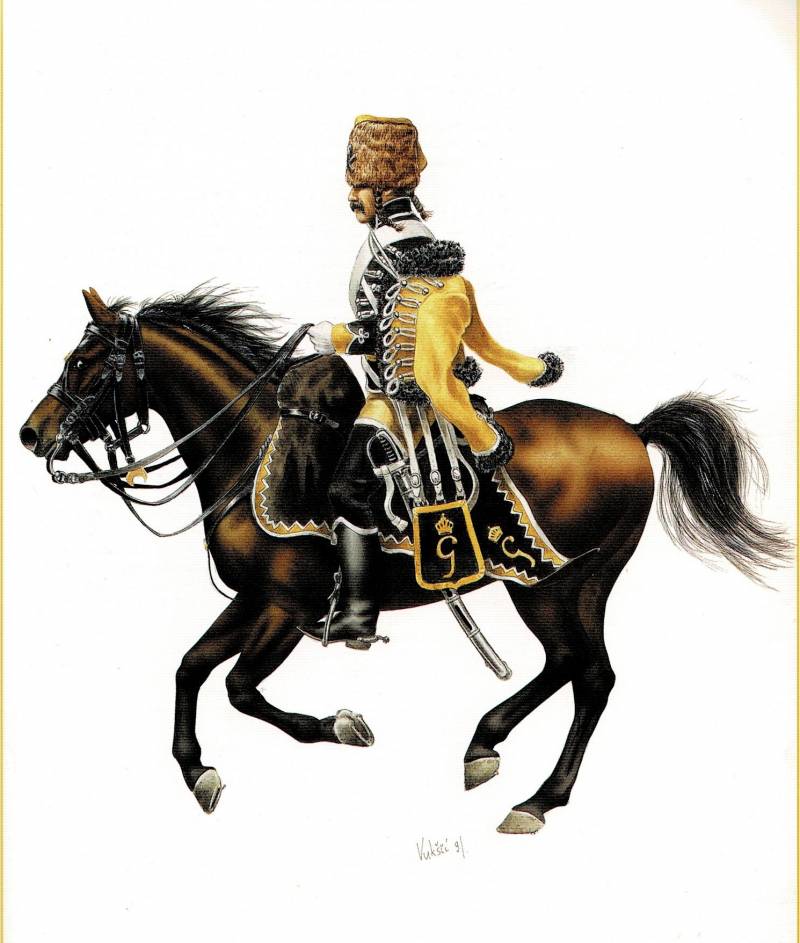 Swedish "Yellow Hussar" 1761 Fig. from the book: V. Vuksic, Z. Grbasic. Cavalry. The history of fighting elite 650BC - AD1914. L .: Cassell, 1994. P.171
In 1761, Sweden decided that one hussar regiment was not enough for it, and formed a second. The existing regiment was divided into two, each of which consisted of six squadrons with a total strength of 800 people each. The new regiment, commanded by Colonel Putbuss, had a blue uniform and was known as the Blue Hussars, and Wrangel's men were known as the Yellow Hussars; everyone was happy, because blue and yellow are, of course, the Swedish national colors. Mustache was another obligatory part of the uniform. Therefore, beardless and beardless hussars, in particular, such as the same Blücher, were allowed to wear false mustaches.

Now let's move across the ocean and see what kind of cavalry at that time existed on the territory of the North American colonies of Britain, which just at the end of the XNUMXth century waged a war of independence with the mother country.

First of all, it should be noted that until 1745 the British cavalry consisted mainly of dragoons, although during the Jacobite uprising, the Duke of Kingston organized at his own expense a whole regiment modeled on the hussar. The next year it was dismissed, but then the Duke of Cumberland, using the same people, formed a regiment ... "light dragoons". After full service in Flanders, it was disbanded in 1748. In 1755, it was decided that England would have three regiments of guards dragoons and eight regiments of army dragoons. In 1759, Colonel George Augustus Eliot assembled the 15th Light Dragoon Regiment, which consisted of six companies and numbered 400 men. At the Battle of Emsdorf, light dragoons attacked enemy lines three times and captured an entire battalion of 125 French infantry and 168 horses. Then five more such regiments were formed, so this name became common in the British army. Only, unlike other cavalry units, "light dragoons" underwent special equestrian training and learned how to shoot from the saddle. The horses they used were smaller: 154 cm at the withers. The same units ended up in the colonies ...

Interestingly, there, overseas, at the very beginning of the American War of Independence (1775-1783), not all "Americans" opposed the "British". Thus, a group of American loyalists formed the "British Legion" under the command of Lieutenant Colonel Banastre Tarleton. Some of his cavalrymen were recruited from the 16th and 17th Light Dragoon Regiments, the only British cavalry units serving in America at this time. These men were called "Tarleton Light Dragoons" and were organized and equipped to British standards. 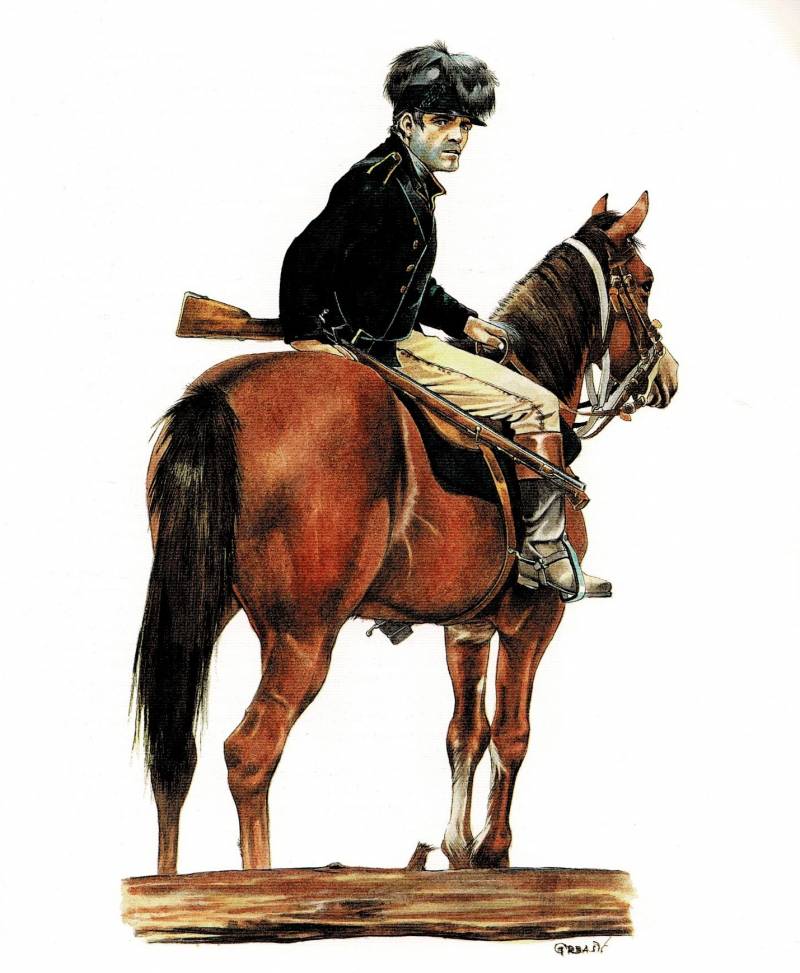 Light Dragoon Tarleton, 1780 Fig. from the book: V. Vuksic, Z. Grbasic. Cavalry. The history of fighting elite 650BC - AD1914. L .: Cassell, 1994. P.173
America was vast and rugged, and the cavalry, although small in number, was an extremely valuable arm and was constantly used for reconnaissance and ambushes, which made it look like the European hussars. In May 1780, Tarleton and his dragoons covered 170 km in 54 hours and, as a result of a surprise attack on Wexhau near the border with North Carolina, destroyed several companies of Colonel Buford's infantry, who were in a hurry to lift the siege of Charleston. Tarleton also inflicted great damage on the forces of General Gates in Camden and General Sumter in Phishing Creek, for which he was nicknamed the Bloody Tarleton. But at Copens, his riders suffered a crushing defeat. Interestingly, after the end of the war, they regained their characteristic helmet, designed by Tarleton himself. It was officially adopted by the British Light Dragoons and remained in service until the late XNUMXth century.

The experience of the wars of the XNUMXth century has unequivocally shown that the light cavalry of the army is very necessary - both national and consisting of people from different countries, dressed in their national costumes, bright and unusual.

Author:
Vyacheslav Shpakovsky
Articles from this series:
Enemies of cuirassiers of the XNUMXth century
Cuirassiers and cuirasses of the Napoleonic wars
Cuirassiers in Russia: how it all began
Cuirassiers in battles and campaigns
Horse latniks back in service
Cuirassiers in museums
Friends and Enemies of Imperial Cuirassiers
Polish shells, Austrian hussars and Turkish fives
Enemies of the Cuirassiers
With whom the latniks of the emperor Maximilian fought?
“A small discovery in the butt of an arquebus ...”
Horsemen of the Eighty Years War
Horses and saddles of the XVI-XVII centuries
“By people and by horses, not by aer”
Ordonance companies
“It's a miracle if someone is killed with a spear”
Mounted Latniks Sunset