Horse latniks back in service 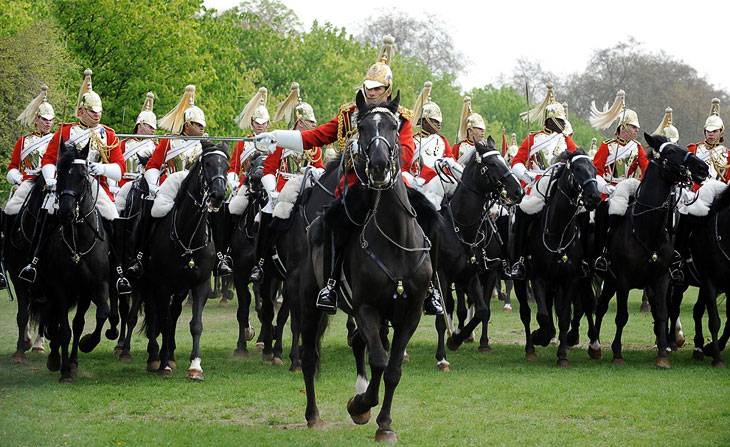 Life Guards Cavalry Regiment, one of the units of the Royal Guard of Great Britain

And he prepared for them Uzziah, for the whole army, shields and spears, and helmets and armor, and bows and sling stones.
2nd book Chronicles 26:14

Military affairs at the turn of the eras. We again return to the theme of equestrian armored men, and all because in 1700 their история far from over. It just became a milestone in the history of military affairs. Changes, of course, began long before this date, but accumulated gradually. And here all appeared at once, and at once in many countries. Moreover, this year marked the beginning of the Northern War, which lasted 21 years, while the last big war in Europe, Thirty Years, lasted 30 years. 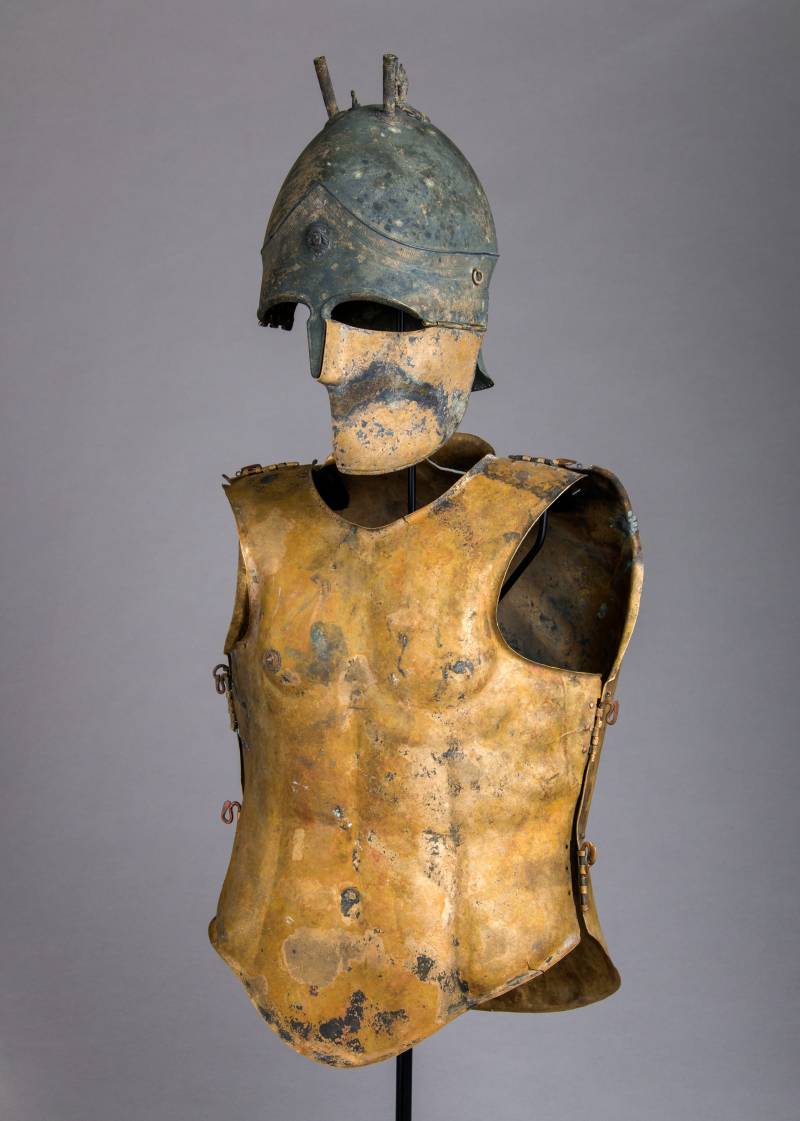 The cuirasses of Ancient Greece were mostly anatomical in shape and demonstrated not only security, but also the physical strength of their owner. Metropolitan Museum of Art, New York 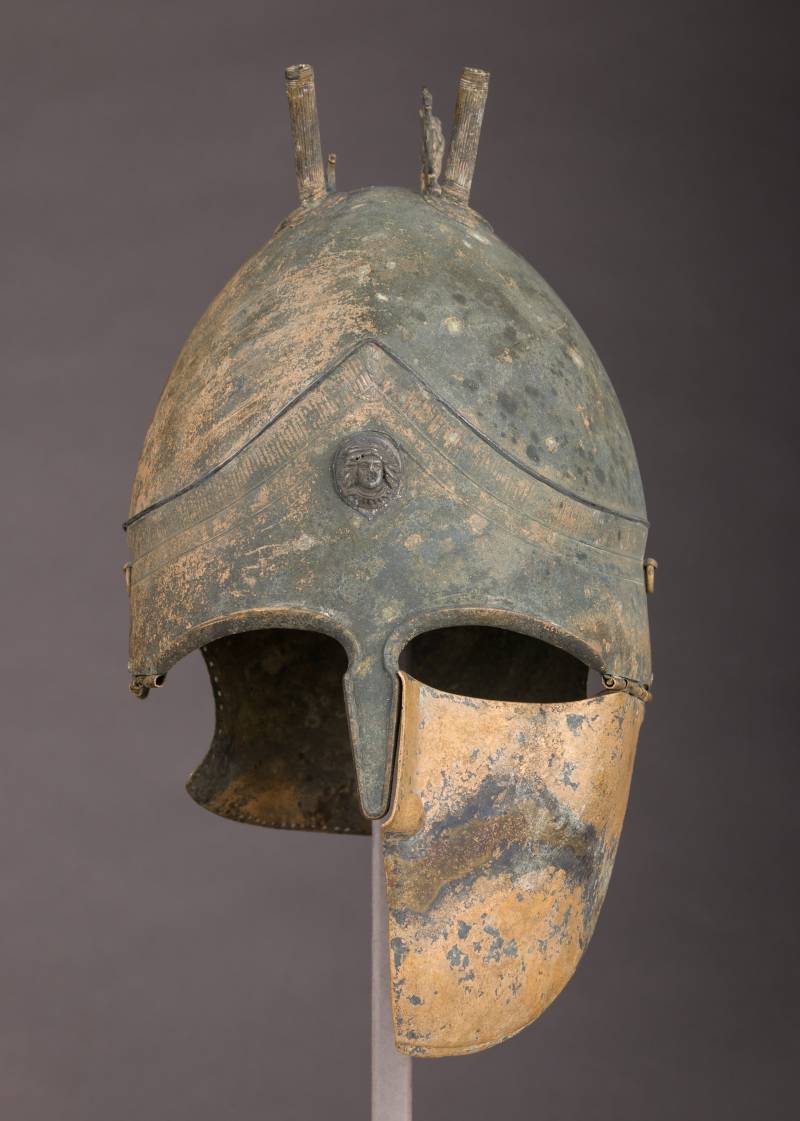 The helmets to such cuirasses very often had face masks! Metropolitan Museum of Art, New York
To begin with, we recall that already in Tudor England, the traditional armament of the armor was the bourguignot helmet, cuirass with leggings, and plate "pipes" on the hands. The armor covered the horseman's body to the knees, so they were called "three-quarter armor!" Similarly, the Dutch cuirassiers, the black Reitars, the armor of Emperor Maximilian I were armed, and, in fact, almost all of Europe’s heavy cavalry. 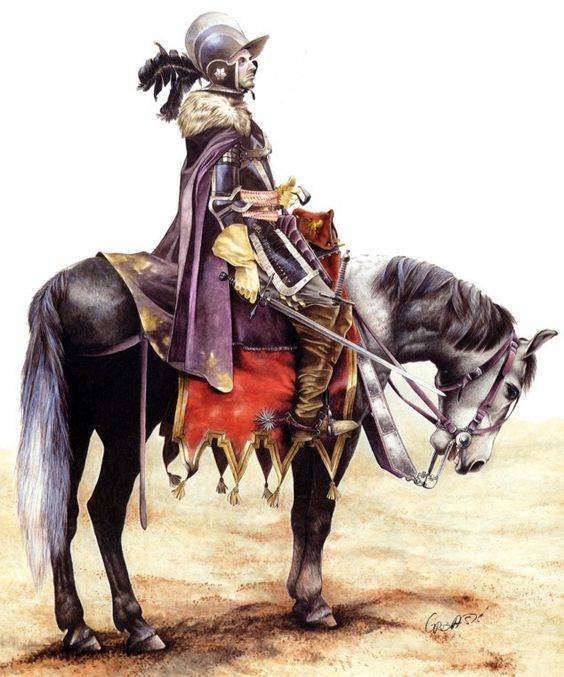 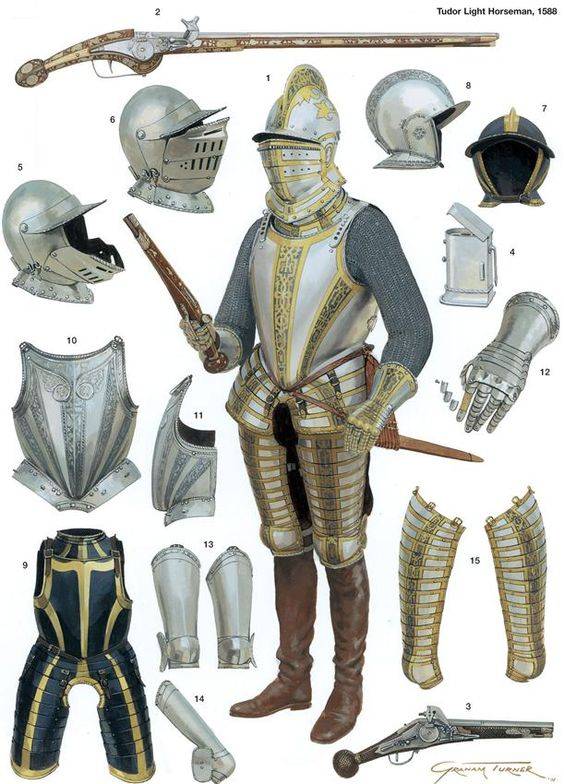 Full equipment of the plate British cavalryman of 1588. Such armor was considered the average version of the horsewear vestment worn by light horsemen (!). They had chain mail sleeves and could also be used in infantry. The breastplate of the cuirass is double, that is, spaced armor was already used then! Together with the bourguignot, the “folding-buff”, or “folding buff”, is used, which folds down the forehead. The length of some pistols reached half a meter, and their firepower was simply amazing. On the other hand, they also armed themselves with short pistols, which they had to shoot at point blank range, seeing the whites of the enemy’s eyes. Fig. Graham Turner
The middle of the next, XVII century was marked by a sharp relief of heavy cavalry. The “sweat” helmet (pot) now no longer covered the whole face, although it had a “visor” of three rods. We used felt hats with a metal frame, a cuirass on a torus and a metal wristband on the left hand. The most heavily armed riders of this era were the Polish winged hussars, especially distinguished themselves near Vienna in 1683. 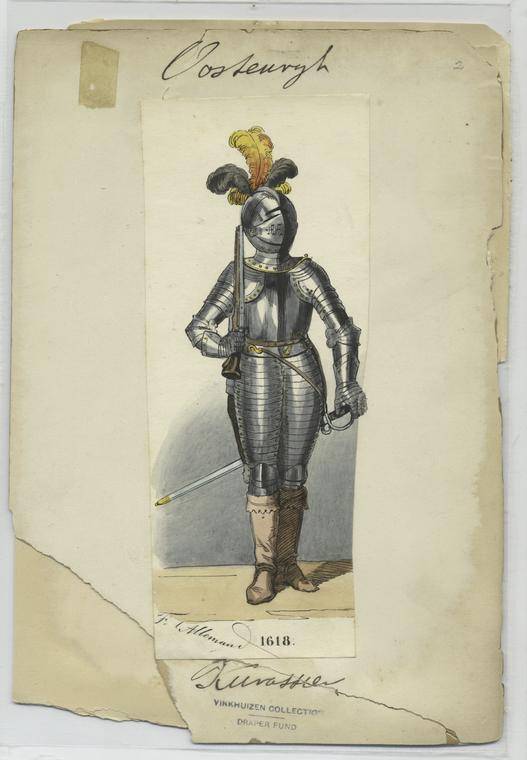 Cuirassier 1618. Thumbnail from Vinkhuijzen collection of military uniforms. New York Public Library
Meanwhile, their time was nearing sunset. The fact is that all this horseman armor was designed for a battle with two types of infantry: musketeers and pikemen. But the bayonet bayonet that appeared in the middle of the 1689th century made this division unnecessary. Now the musketeers could already defend themselves from cavalry attacks. The French army was equipped with bayonets in 1690, Brandenburg-Prussia in the same year followed the example of France, and Denmark armed the infantry with bayonets in 1694. In Russia, baguettes inserted into the trunk appeared in 1702, and French-style bayonets with a nozzle in the guard in 1709, and by the whole army by XNUMX. 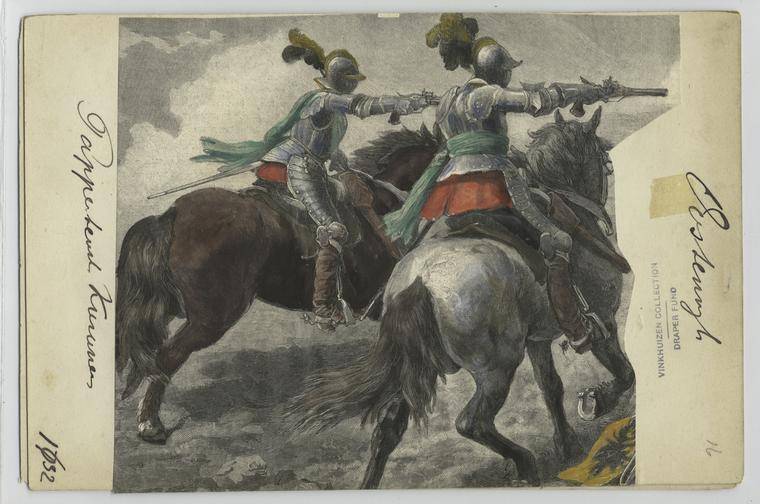 Cuirassiers of Pappenheim 1632. Miniature from the Vinkhuijzen collection of military uniforms. New York Public Library
Now the infantry met the attacking cavalry both with fire and bayonets, so the tactics of its action changed in the most serious way. Shooting a horse from pistols was replaced by a cold blow weaponsand the pistols, although they were left to the cavalry, were more used for self-defense than for the extermination of enemy infantry on the battlefield. About any karakolirovanie now and there was no question. The attack, as a rule, was carried out by a two-line formation, knee to knee (due to which high stiff over the knee boots became a mandatory element of uniform for heavy cavalry) and at full gallop to reduce the time spent under fire. Again, a helmet on his head was now needed not so much to protect against enemy weapons, but to protect it from horseshoes flying from their hooves! In the horse lava, the horseshoes also flew and were mortally dangerous for the riders, but ... immediately the riders raced in rows one after another, and the risk of getting a horseshoe on the head increased many times. 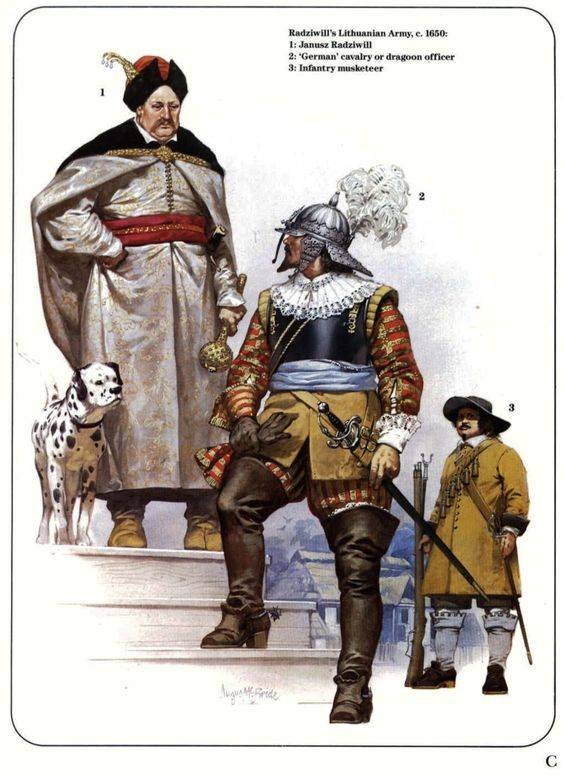 Lithuanian army of Janusz Radziwill, circa 1650 Angus McBride
The rate of fire of new guns, from which they were firing without a stand, also increased and reached two rounds per minute. An interesting test was carried out in Austria with weapons from museum collections manufactured between 1571 and 1700. The goal was a mannequin of a human figure of medium height. The mannequin was shot at distances of 30 and 100 m. About 20 smoothbore arquebuses, wheel and flintlock guns were tested. The results showed that the probability of hitting at a distance of 100 m from the gun attached to the test table ranged from 40 to 50 percent. At the same time, a 17 mm caliber bullet at a distance of 30 m could penetrate 3-4 mm thick armor, and 100-1 mm thick at 2 m (for comparison: the Belgian FN assault rifle can penetrate 12 mm of armor at a distance of 100 m). Moreover, the only difference between weapons of the XVII and XVIII centuries. consisted only in the fact that later models were lighter and had a greater rate of fire. Three pistols were also tested, one of which was manufactured in 1620, and the other two in 1700. Their accuracy at a distance of 30 m (also attached to the test bench) was much higher: from 85 to 95 percent. All three pistols were able to break through a 2 mm sheet of armor. 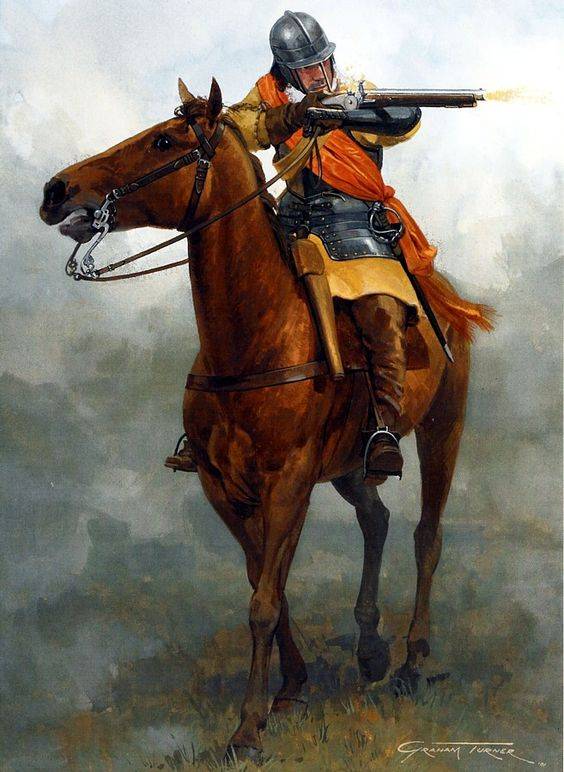 British cavalryman of the middle of the XVII century. Fig. Graham Turner
For some time, the armored cavalry tried to repel the infantry, using armor to protect against muskets, and armor to protect against pistols, but together they weighed more than 15 kg, and this defense did not justify their high price or significant inconvenience. As a result, already at the beginning of the 1698th century, France, Bavaria, Austria, Saxony, Brandenburg, Denmark and the Netherlands left their cuirassiers with only cuirasses and hats under which they wore steel comforters. In 1707, Britain officially abolished the use of armor in equestrian regiments, but in 1821 it reintroduced the breastplate, worn under a uniform (!) During the war for the Austrian inheritance. The cuirass was not worn until the coronation of George IV (XNUMX), and then was used only in the horse guard.

The weight of the cuirass was about 5 kg and the thickness was about 2-3 mm. That is, such a shell was intended primarily to protect the rider from chopping and piercing weapons, but its effectiveness against firearms depended on the distance from which the shot was fired. Until the middle of the 1755th century, cuirasses were forged from red-hot metal plates on massive castings of a special shape. The first series of cold pressed bibs was only made in Prussia in XNUMX. This new technology has made it possible to produce large batches of standard quality cuirass.

Broadsword of the English cavalry of the XVII century. Metropolitan Museum of Art, New York
However, we will return to England, where in 1660 Charles II reigned again. He dismissed the existing army and created a new one. In particular, out of the 600 nobles who followed him into exile, three companies were formed: a detachment of His Majesty, a detachment of the Duke of York, and a detachment of the Duke of Albemarl (General Monck, who did much to restore royal power in England. A fourth detachment appeared in Scotland, shortly after Restoration of the monarchy. 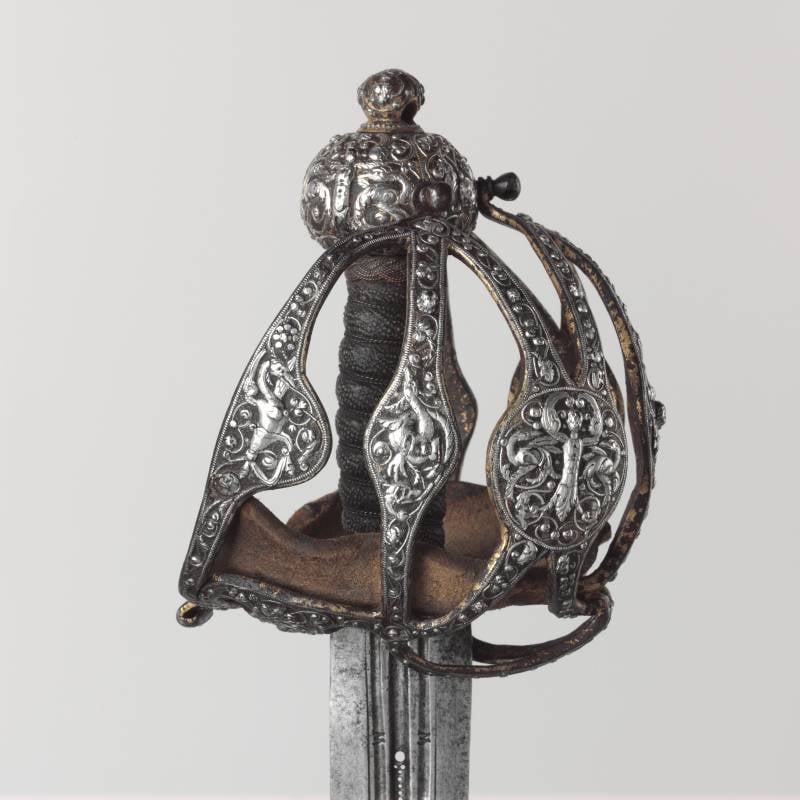 This broadsword is a hilt. Due to its characteristic shape, it was called “basket” - “basket”
In 1685, Jacob II succeeded Charles II, but three years later he was overthrown in the so-called bloodless revolution (“Glorious revolution”). During his reign, the English cavalry was the most equipped, most trained, and highest paid regular horse force in Europe. Seven cavalry regiments five were formed in 1685 and two more in 1688. 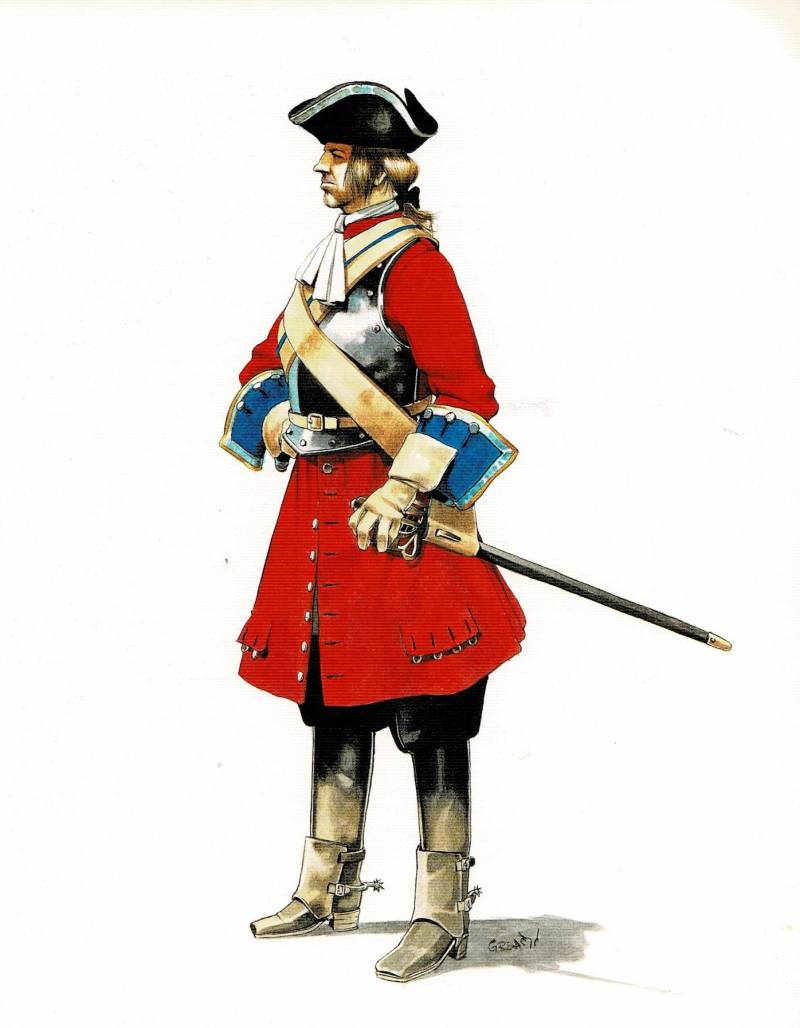 English Horse Guardsman of the beginning of the 650th century Fig. from the book: V.Vuksic, Z. Grbasic. Cavalry. The history of fighting elite 1914BC - AD1994. L .: Cassell, 159. P.XNUMX
In 1746, for reasons of economy, the 3rd and 4th companies in each regiment were disbanded, and the first three regiments were converted into cheaper dragoons, although they continued to be listed as guards. In 1678, the Guards Horse Grenadier Detachment was also formed, and horse grenadiers appeared in all other units. The second, or Scottish, Detachment of equestrian grenadiers was created in 1702. In 1746, when the horse-riding troops began to be divided not into four, but into two parts, they were respectively given the names of the First and Second detachments.

In 1788, the First Horse Guards and the First Horse Grenadier Detachments became the First and Second Regiments of the Life Guards. Before that, they were called the Horse Guards, but now they have received this official name. They existed as such until 1922, when both of these regiments were combined into one. 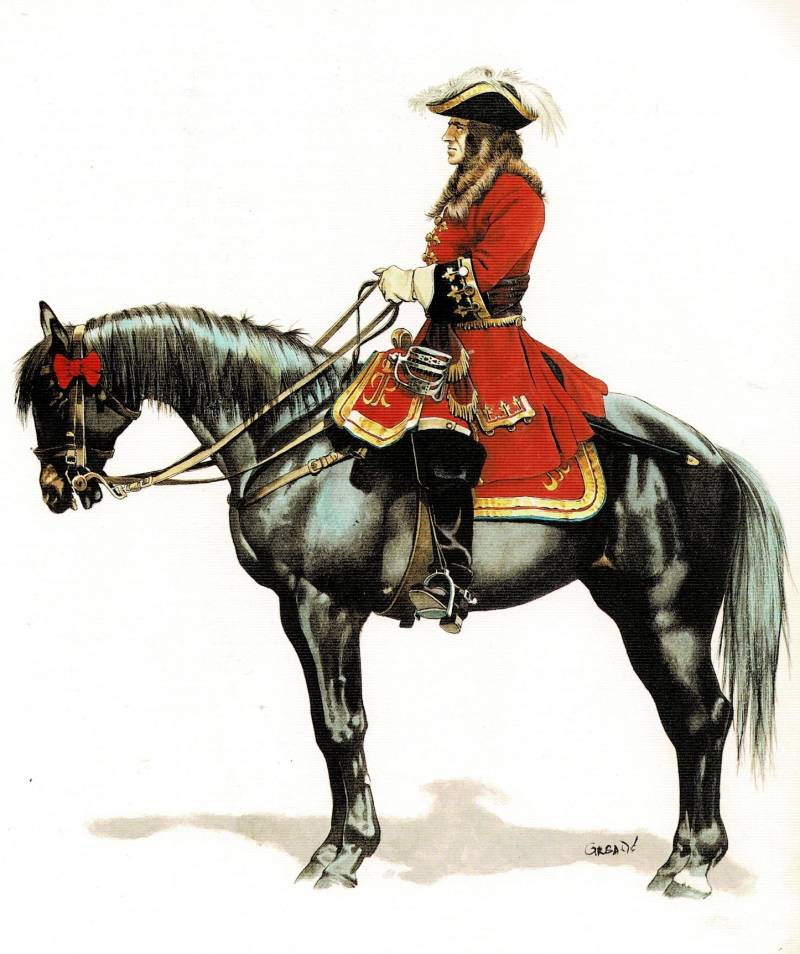 Officer of the regiment of the Royal Dragoons in 1685. In the 1670s, cuirasses, which were widely used before in the British cavalry, became obsolete and were not officially used until 1707, when the cavalry of the Duke of Marlborough used them in the Netherlands. They were also used by the British cavalry in Tangier. There are several portraits painted in 1680, in which cavalry (and infantry!) Officers are depicted in cuirasses, so this does not mean anything, since cuirasses in portraits were considered a symbol of masculinity, although it is quite possible that they wore them in parades . In 1751, the name of the regiment was changed to the 1st regiment of royal dragoons. Fig. from the book: V.Vuksic, Z. Grbasic. Cavalry. The history of fighting elite 650BC - AD1914. L .: Cassell, 1994. P.145
The British Life Guards first entered battle in Maastricht in 1673. She played a major role in the defeat of the army of the rebellious Duke of Monmouth at Sedgemur in 1685. At the Battle of Boyne in 1690, she fought against the forces of the former Jacob II, and at the Battle of Lenden in 1695, under the command of William III, she first fought a battle with the French palace cavalry. This was followed by the war for the Austrian inheritance, Dettingen and Fontenoy, as well as participation in the Napoleonic Wars and the famous Battle of Waterloo. In 1882, the combined regiment of the Life Guards and the First Dragoon Regiment fought in Egypt in one of the battles known as the Battle of Cassassin.

But these units did not wear cuirasses for a long time, although they are worn today. True, the cuirass of the current form belongs to the reign of George IV. The second Life Guards was dressed in black varnished cuirasses at the royal show in 1814, but there is no evidence that they were used in battles later than the end of the XNUMXth century. That was the level of distrust of defensive weapons at that time in the British cavalry!

Author:
Vyacheslav Shpakovsky
Articles from this series:
Cuirassiers in museums
Friends and Enemies of Imperial Cuirassiers
Polish shells, Austrian hussars and Turkish fives
Enemies of the Cuirassiers
With whom the latniks of the emperor Maximilian fought?
“A small discovery in the butt of an arquebus ...”
Horsemen of the Eighty Years War
Horses and saddles of the XVI-XVII centuries
“By people and by horses, not by aer”
Ordonance companies
“It's a miracle if someone is killed with a spear”
Mounted Latniks Sunset