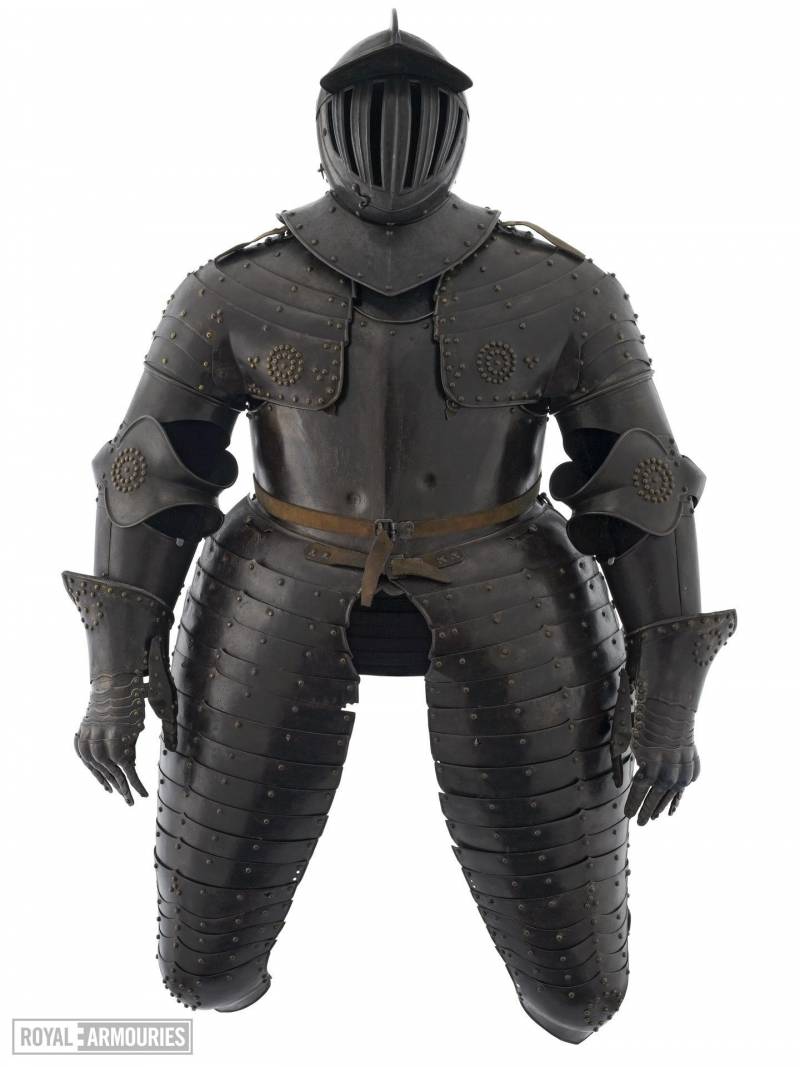 I saw slaves on horses, and the princes walking, like slaves, on foot.
Ecclesiastes 10.5: 7

Military affairs at the turn of the eras. In the transitional era, military affairs always develops rapidly. However, it is influenced by two directly opposite trends. The first is the power of tradition and the established belief that the old is good with what is familiar. The second - you need to do something, because the old tricks for some reason do not work. So, Marshal Henry VIII Thomas Audley demanded that none of the shooters should wear armor, except for the helmet of Morion, as he considered: "There can be no good shooter, be it an archer or an arquebusier, if he serves dressed in armor." 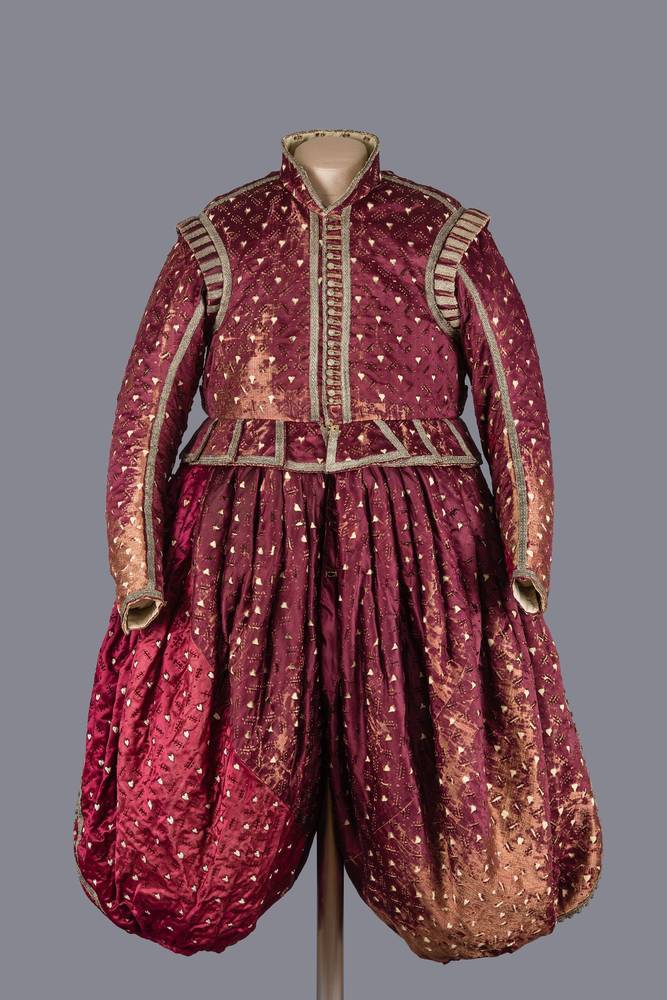 Many readers of VO ask why many armor of this time have such plump leggings. And here's why: look at what pants were in fashion at the time. Here is the double of the Elector Christian II of Saxony (1583-1611). OK. 1610. The waist circumference is 120 cm. The chest circumference is 111,5 cm. Weight is 987. Inventory records show that this doublet was worn by Elector Christian II of Saxony when he received the feudal right to dominate the duchy from Emperor Rudolph II in Prague in 1610. year. This event happened on the morning of June 27, 1610, so we know for sure that such clothes were worn then (Vienna armory Ward) 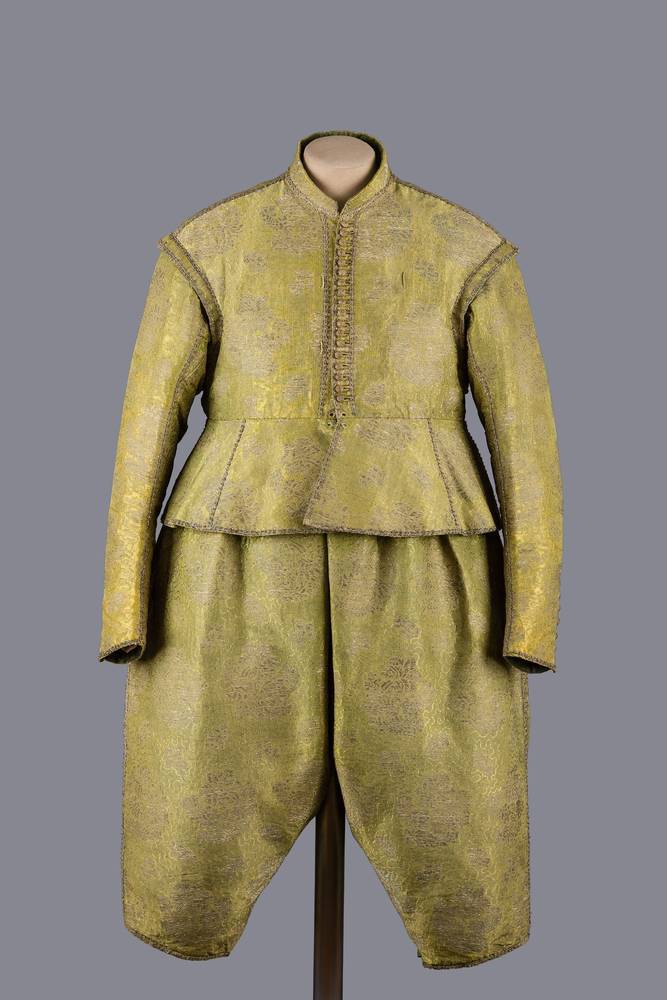 19 years have passed, but the fashion has not changed. Doublet of Elector Johann George I of Saxony. OK. 1629. G. Sewn in Dresden. Pants length 70 cm, buttocks 51,5 cm, weight 1220 g (Vienna Armory)
As a result, when in 1543 40 soldiers were sent from France to Norwich, then 8 of them were archers who had a “good bow”, 24 “good arrows” (the number since the time of the Battle of Bannkobern!), “A good sword”, a dagger, but all the rest were “billmen,” that is, spearmen armed with a “bill” (“tongue of an ox”) - a 1,5-meter spear, with a knife-shaped blade, convenient in hand-to-hand combat. The sword and dagger complemented the weapons, and they were all also in armor, but they weren’t specified in the document. By the way, this same "bill" from the armament of the British army was excluded by decree of 1596. Now the infantry was completely armed only with peaks and arquebuses.

The development of military affairs in the XNUMXth century gave rise to many amusing weapons. For example, here is such an infantry shield with a lantern, a plate glove and a retractable blade. The idea was to open the flashlight cover on the shield unexpectedly for the enemy, blind it at night and stab it without much difficulty. The blades on the glove had notches to capture enemy blades. However, most likely this shield would be more dangerous for its owner than the enemy. After all, the lamp on it was oil, and dousing with burning oil, waving such a shield, it would be easier than simple! (Vienna Armory)
However, not quite so. Good English Bow was still in use. Moreover, there were military leaders who demanded and even sought the presence in the English army of infantry with two types of weapons - a lance and a bow. They were called that - dual-armed warriors. The illustrations depicting them and relating to 1620 have been preserved. They depict a typical pikiner in pikiner armor and a Morion helmet, which shoots from a bow and at the same time holds his lance in his hand. It is clear that this required considerable dexterity and serious training. In addition, the warrior was seriously burdened. So the “double weapons”, although it looked theoretically very tempting, did not take root in practice. Moreover, British historians such as A. Norman and D. Pottinger report that after 1633 Pikiner armor was not mentioned at all, that is, they did not wear anything except a helmet to protect them! 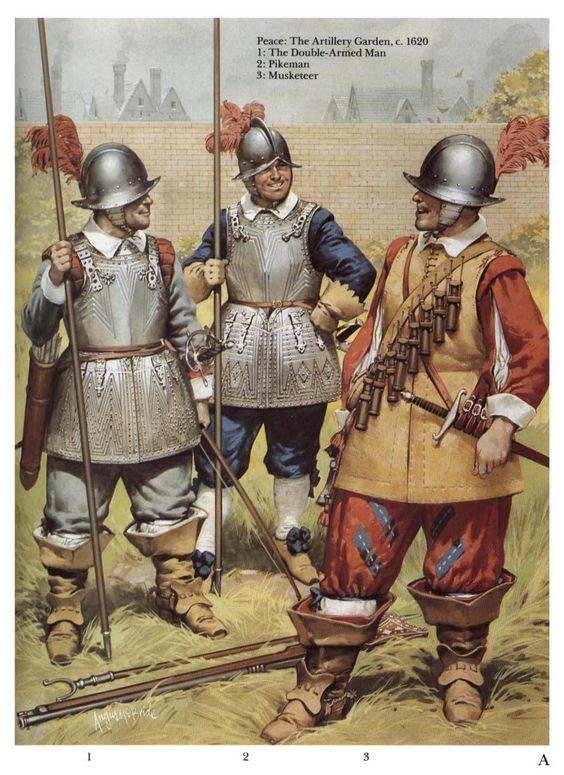 Drawing by the English artist Angus McBride. On it you see two British pikemen and a musketeer of 1620. The one on the left is just one of the “double weapons” warriors. By the way, their armor is by no means a fantasy of the artist, but is most carefully redrawn from samples from the Royal Armory of Leeds
At the same time, the number of arquebuses was constantly growing, and at the time of the death of Henry VIII there were 7700 of them in the Tower arsenal, but only 3060 bows. Knightly armor still existed, but essentially turned into a masquerade metal costume. During the reign of Queen Elizabeth, the development of knightly armor continued, but it was worn mainly by her courtiers. In fact, the battle armor at that time was only cuirassier armor, which was described in previous articles of this cycle, but they also underwent changes in accordance with the requirements of the time. True, back in 1632, the English historian Peter Young noted, the English cavalryman was all the same knight, although he did not have plate shoes that he was replaced with knee-high boots. He armed himself either with a spear, but somewhat lightened in comparison with the knight's, or with a pair of pistols and a sword. 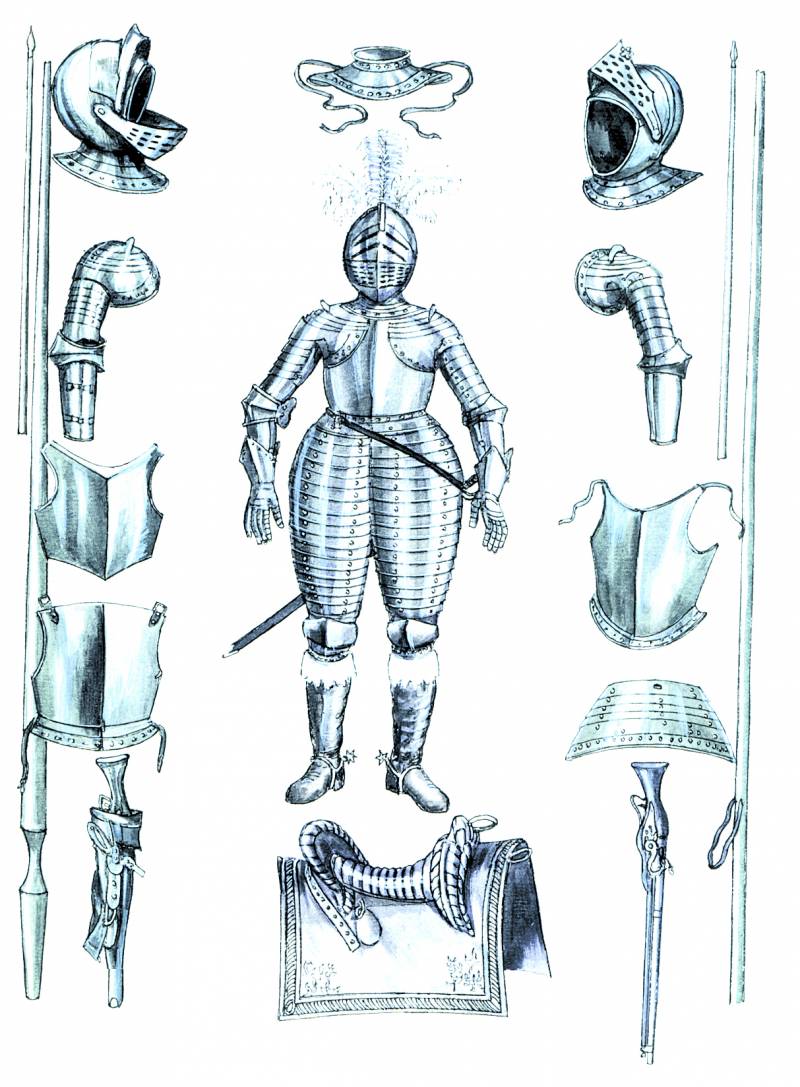 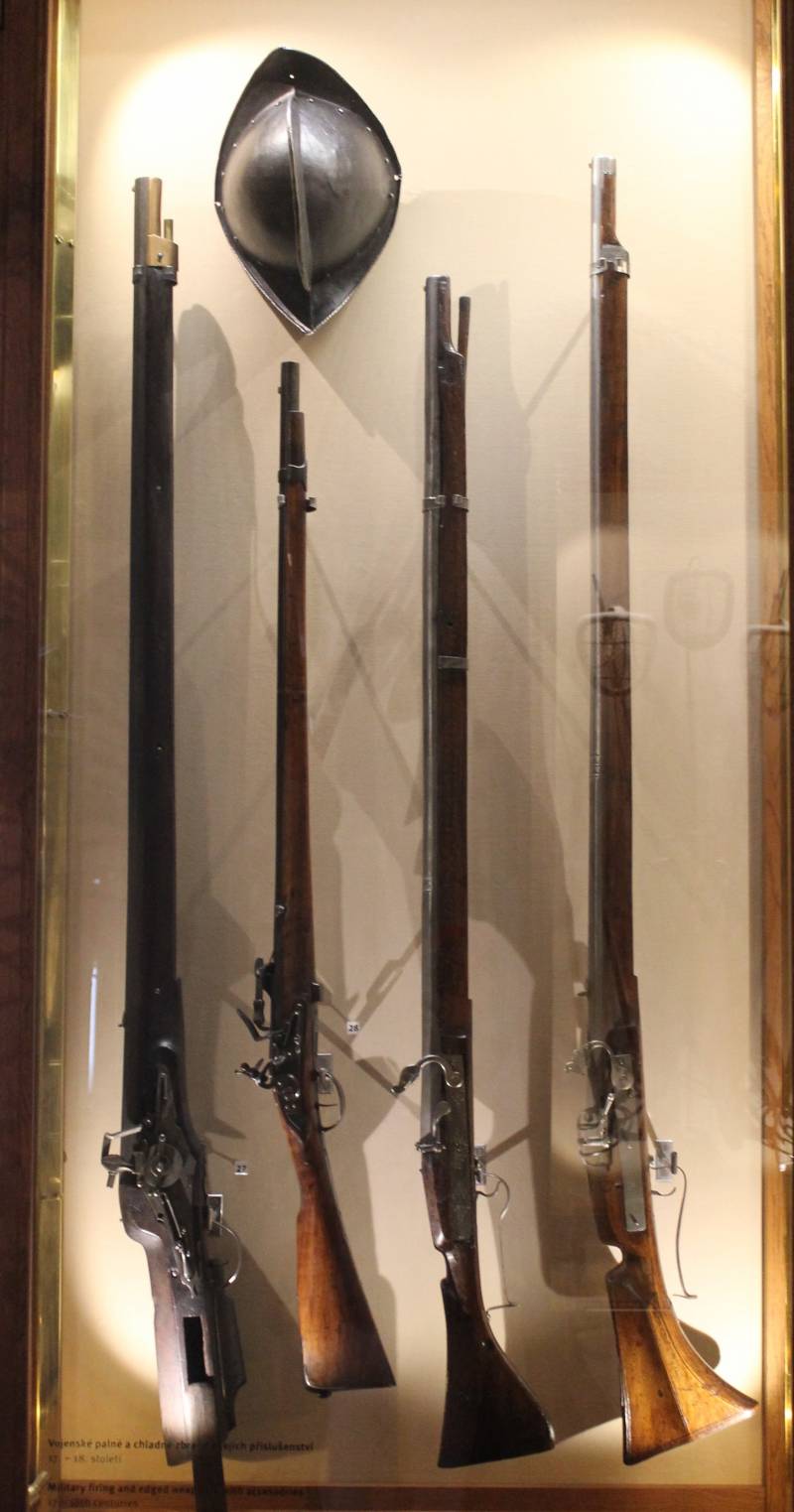 Muskets and helmet from Cesky Krumlov castle on the Vltava
And then the time of the civil war of 1642–1649 came, and the problem of the price of cuirassier armor became crucial. Armies became more and more massive. More and more common people were called in to them, and buying them expensive plate gloves, plate leggings and completely closed helmets with visor type was an unacceptable luxury. Armament was simplified and cheapened all the time. Therefore, it is not surprising that at that time such simplified types of protection appeared as a helmet “sweat” (“pot”) for ordinary horsemen of the army of the parliament and helmets “cavalier”, which looked like a wide-brimmed hat with a sliding metal carrier, popular in the army of the king. 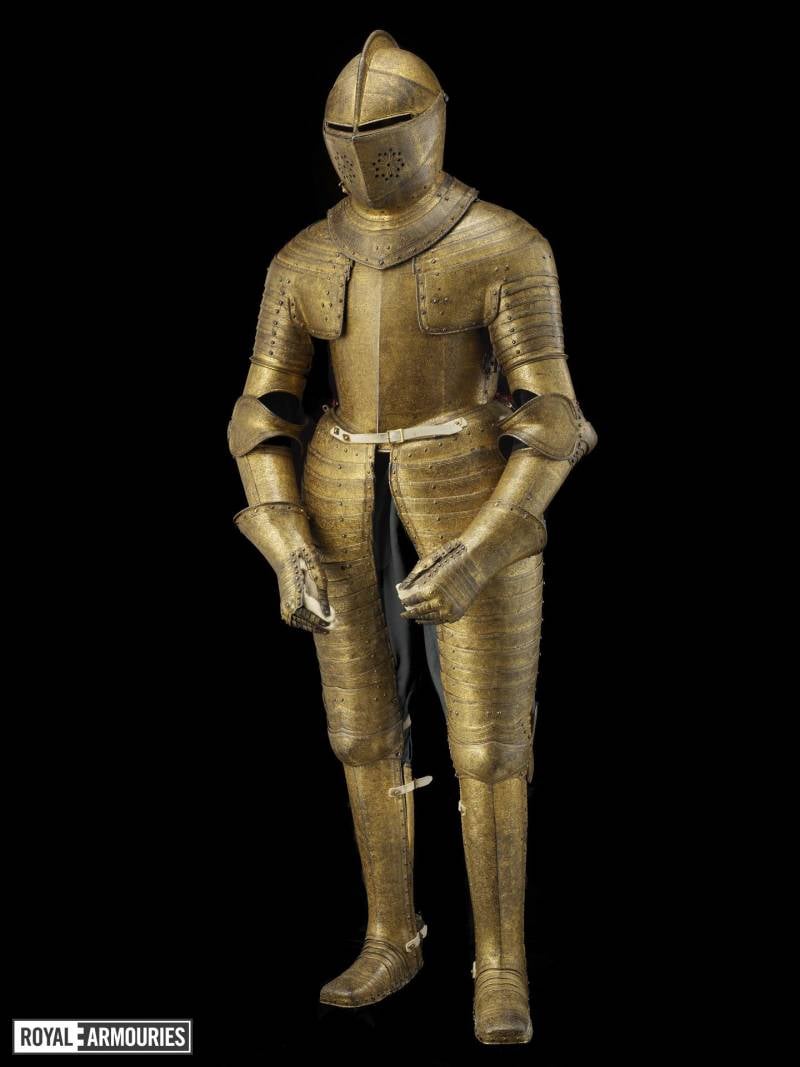 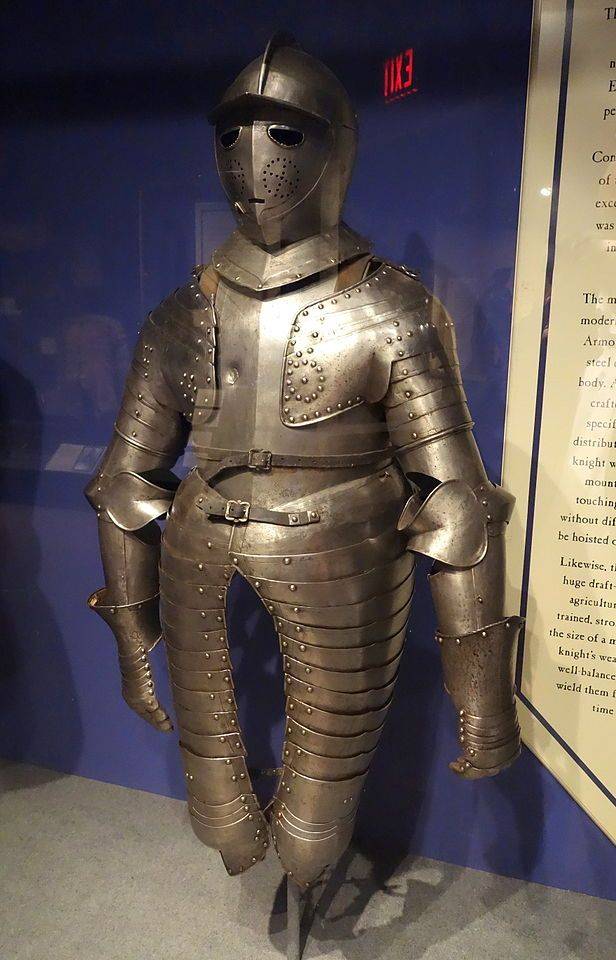 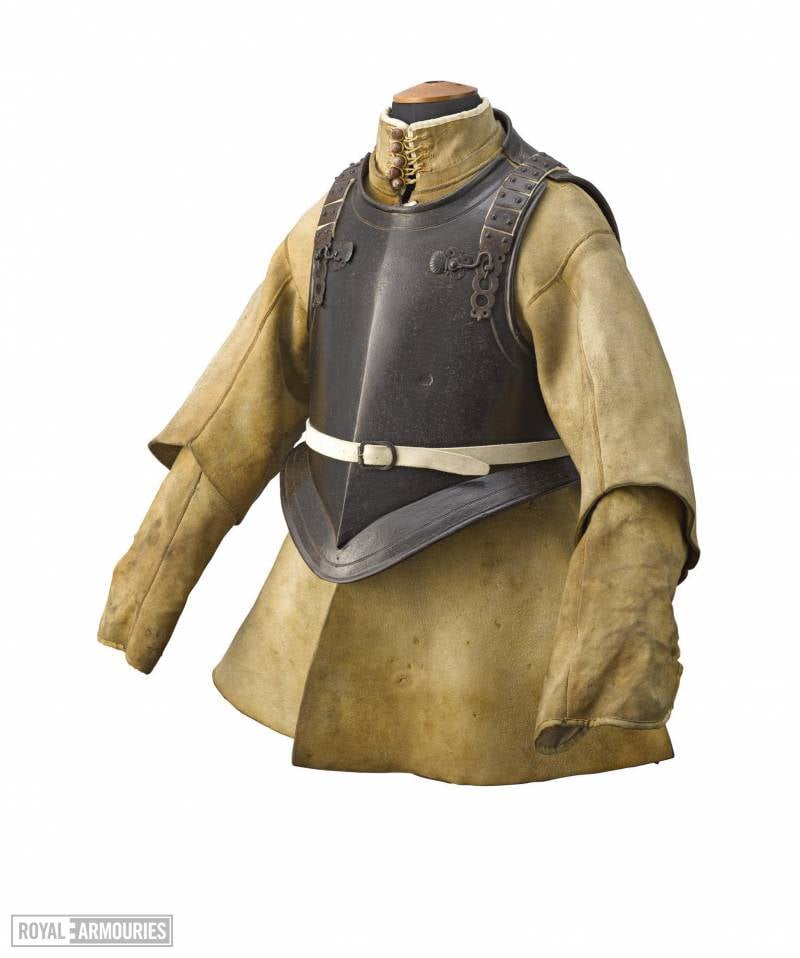 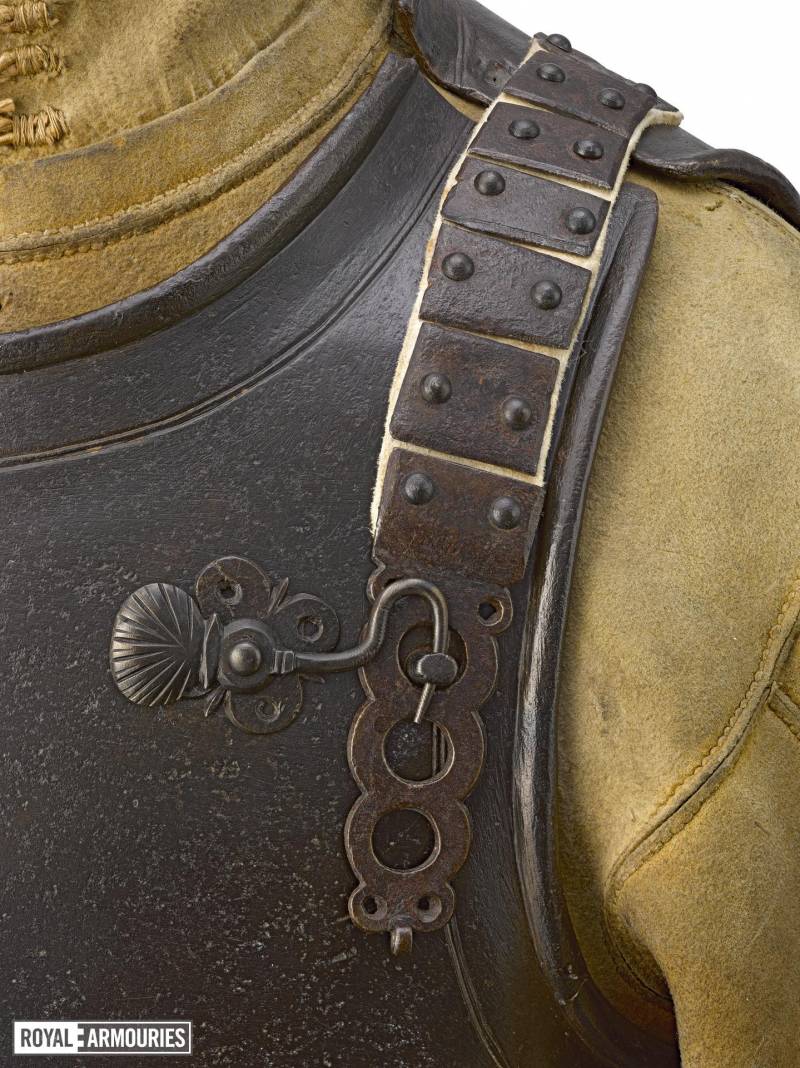 The chest and back began to cover the cuirass to the waist, and the left arm - the bracelet that protected the arm to the elbow, and wore it with a plate glove. But in the army of the parliament, such details of armor were considered "overkill" and her "virgin cavalry had only helmets and cuirasses.

One of the two swords solemnly handed over to the imperial embassy by Pope Julius II on January 24, 1509 on the occasion of the construction of Maximilian I and his grandson, later Charles V, into the knighthood of St. Petra. The jeweler Salomone da Sesso, who, after a change of faith, called himself “Ercole dei Fidelis” (circa 1465–1518/1519, Ferrara or Rome) (Vienna imperial arsenal. Hall No. 2), may be hiding under the name of the manufacturer “Master Ercole”.

Since the mid-1540th century, a war hammer has become an increasingly popular weapon for cavalry, worn either on the bow of a saddle or on a belt. All the impact force of the hammer tip was concentrated in a very small area, so with its help it was possible to break through even strong armor. A war hammer was used until about 1526. To decorate this magnificent battle ax, which was made for the brother of Emperor Charles V, who later became Emperor Ferdinand I, the gold melt technique (amalgamation) was used, which, due to its complexity, soon ceased to be used. Year of manufacture 1503th. Place of manufacture: Augsburg. The owner is Emperor Ferdinand I, son of Philip of Habsburg (1564-3). Vienna Armory. Hall number XNUMX
John Clements, a well-known specialist in the field of reconstruction of fencing, in this regard, indicates that from 1500 to 1600 the West European sword very quickly transformed into a rapier and a sword, and in the heavy cavalry the latter turned into chopping broadswords.

Basketball Sword (Metropolitan Museum of Art, New York)
In fact, these were the same swords, but with a wider blade. In England they began to be called the "basket sword", since the handle was protected by a real "basket" of iron rods or strips. Under the influence of the French fencing school, the type of civilian light sword with a blade 32 inches (81 cm) long spread. 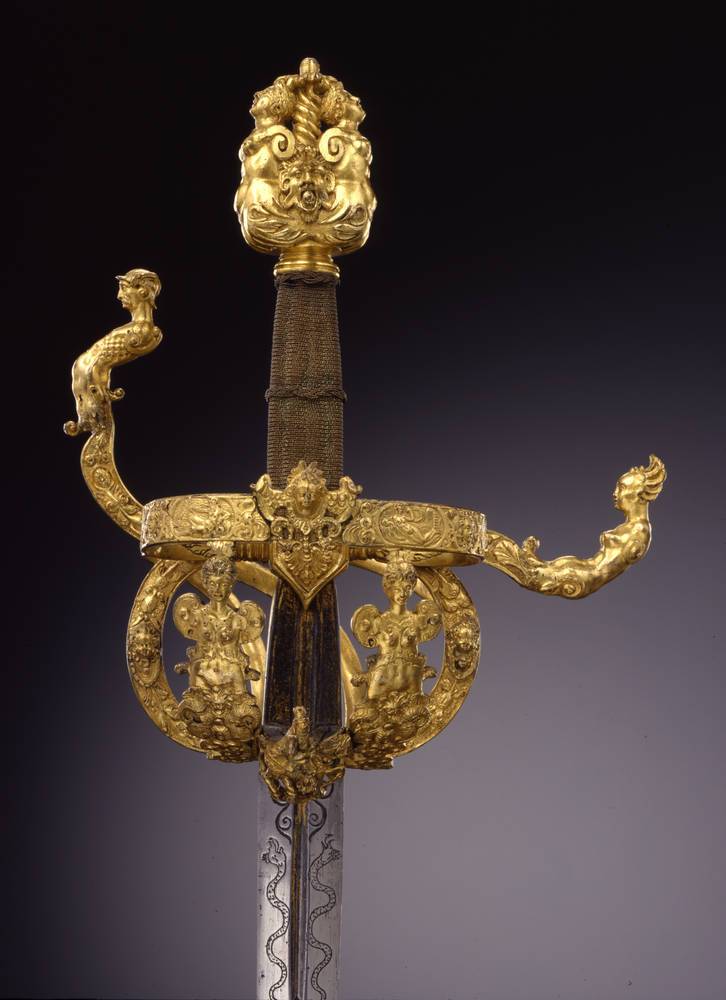 So, in fact, equestrian armor gradually approached its sunset and the year 1700 became its border. No, cuirassiers in brilliant cuirasses from the armies of Europe did not leave anywhere, but they did not play such a significant role in wars as, say, French pistols of the “war for faith” era. It became clear that success in the battle depends on the skillful actions of the commander and the integrated use of infantry, cavalry and artillery, and not the complete superiority of any one kind of troops and, in particular, plate cavalry.

It remains to talk about a little. In particular, about the recognition system "friend or foe" on the battlefield. After all, there and there, people fought in black armor, covering them from head to toe, or in yellow leather tunics, black cuirasses and hats with feathers. How can one distinguish between friends and foes? 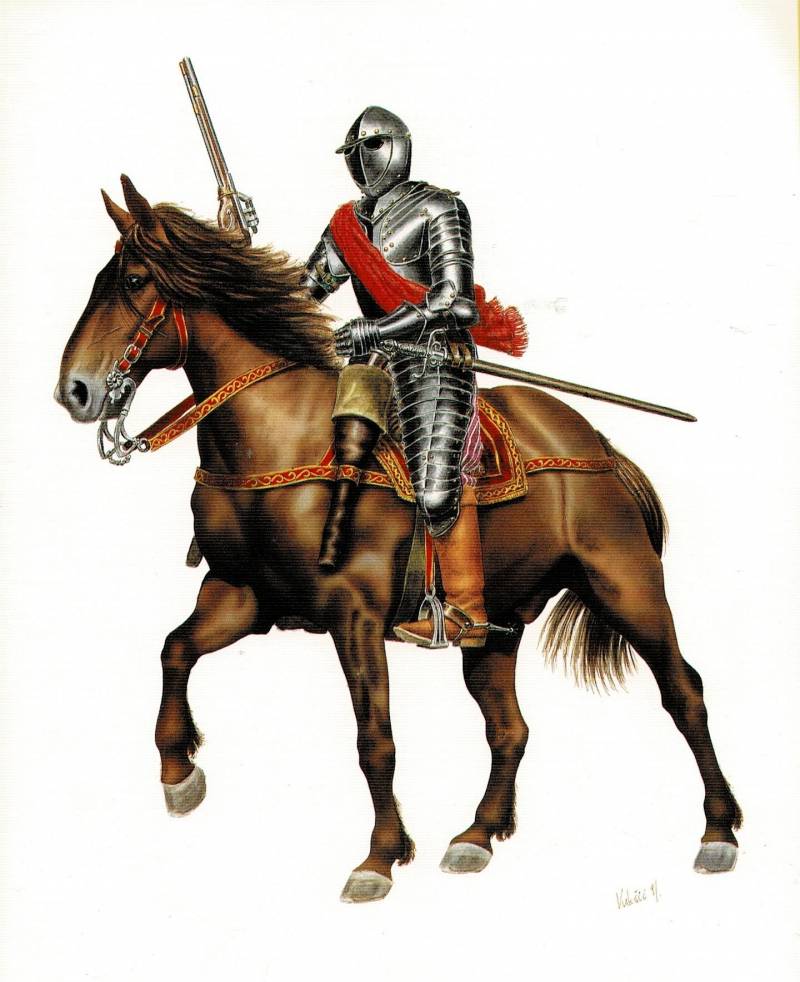 Imperial cuirassier with a scarf over his shoulder. Without him, who is who, it would be simply impossible to determine. Illustration from the book “Cavalry. The history of fighting elite 650BC - AD1914 »V.Vuksic, Z.Grbasic
The solution was found in the use of a scarf, which was worn over the shoulder like an order ribbon, and which the decor of the armor did not hide, from whom it was, of course, and indicated its nationality in the most noticeable way. In France, for example, in the XNUMXth century it could be black or white depending on who its owner fought for - for Catholics or Huguenot Protestants. But also it could be green, or even light brown. In England, scarves were blue and red, in Savoy - blue, in Spain - red, in Austria - black and yellow, and in Holland - orange. 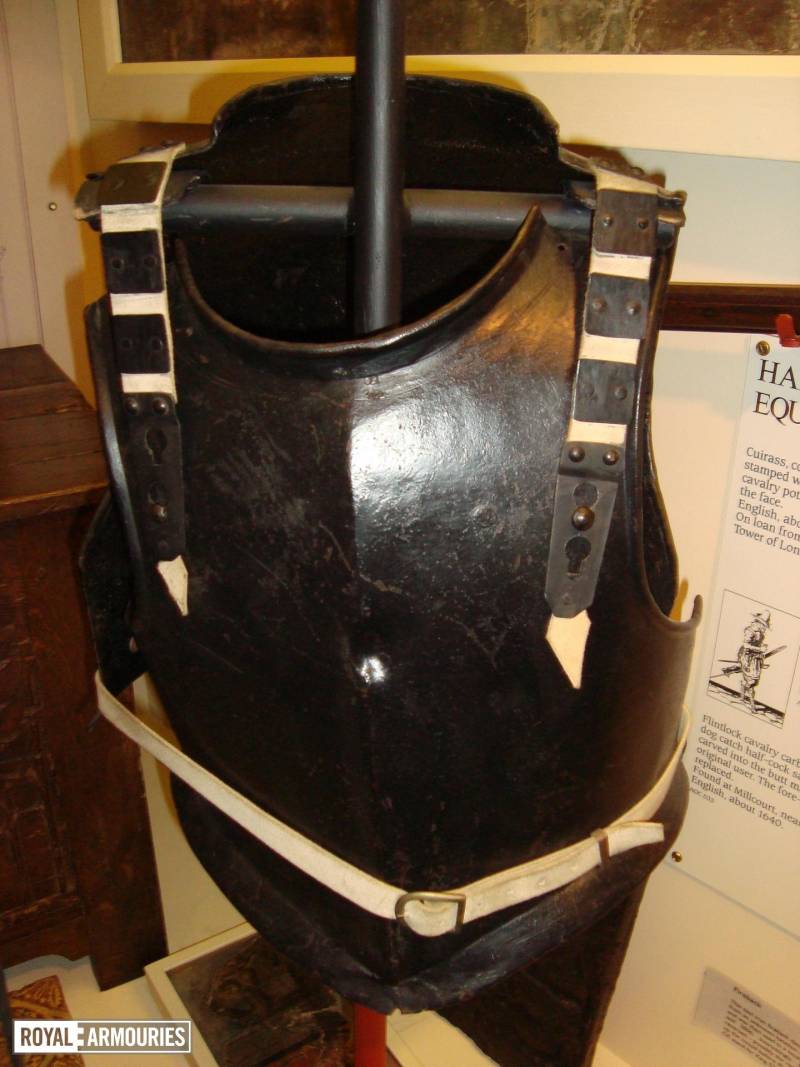 The English cuirass of 1650 was not much different from the later cuirasses of the XNUMXth-XNUMXth centuries. (Royal Arsenal, Leeds)
Arms simplification also happened. All kinds of clerics and maces from the arsenal disappeared. The weapon of the heavy cavalry was a broadsword and two pistols, a light pistol and a saber, dragoons got a sword and a carbine, and horse pikemen got long peaks. This turned out to be quite enough to solve all the combat tasks of the era of developed industrial production, which Europe entered after 1700.

Author:
Vyacheslav Shpakovsky
Articles from this series:
Cuirassiers in museums
Friends and Enemies of Imperial Cuirassiers
Polish shells, Austrian hussars and Turkish fives
Enemies of the Cuirassiers
With whom the latniks of the emperor Maximilian fought?
“A small discovery in the butt of an arquebus ...”
Horsemen of the Eighty Years War
Horses and saddles of the XVI-XVII centuries
“By people and by horses, not by aer”
Ordonance companies
“It's a miracle if someone is killed with a spear”