Friends and Enemies of Imperial Cuirassiers 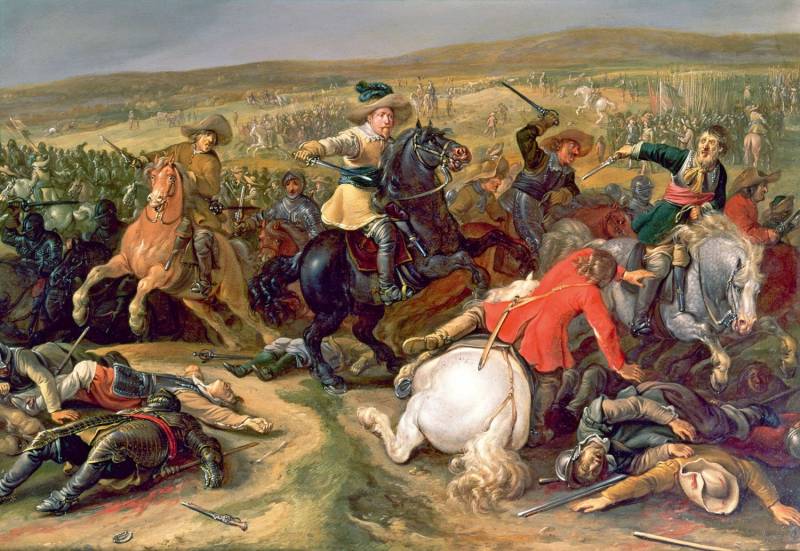 Darius sent a thousand horsemen with them.
The second book of Ezra 5: 2

Military affairs at the turn of the eras. В past materials We met with the enemies of the cuirassiers among the riders of the West and East. But not all of the East was considered, so today we will continue this topic. Well, this time the material will be illustrated entirely and completely by “colorful pictures”. And then all the photos from museums, even famous ones. But the illustrators of the same books by Osprey and Kassel publishing houses are also familiar with them, and their requirements are very high. So why not look at them, and at the same time not get to know the next “horsemen of the war", whom the battlefields of the XNUMXth – XNUMXth centuries saw in this very crucial era? However, we can not do without museum artifacts, as well as paintings by artists of that era, so today we look at the paintings of Jan Martens de Jonge. 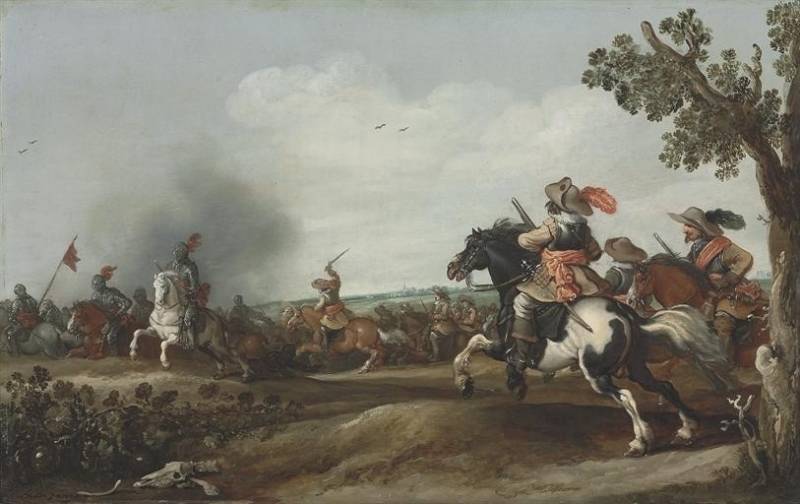 Swedish cavalrymen attack the flank of imperial cuirassiers. One of the many paintings by Jan Martens de Jonge, dedicated to the equestrian battles of the Thirty Years War. His paintings are often confused with the works of Palamedes Palamedes and Snyers, and vice versa. Yes and no wonder! It is in a private collection, sold at Sotheby's

Knights with pistols in their hands.

But it was that the plate cavalry of cuirassiers and reitars, replacing the former knights, although it was very numerous - under Henry II in France in 1558 alone there were 7000 riders, but still could not replace the cavalry from the riders with light weapons. And if it was hard for France to have so many detachments of latin pistols, then what can we say about countries whose economy and industry were not so developed at that time? 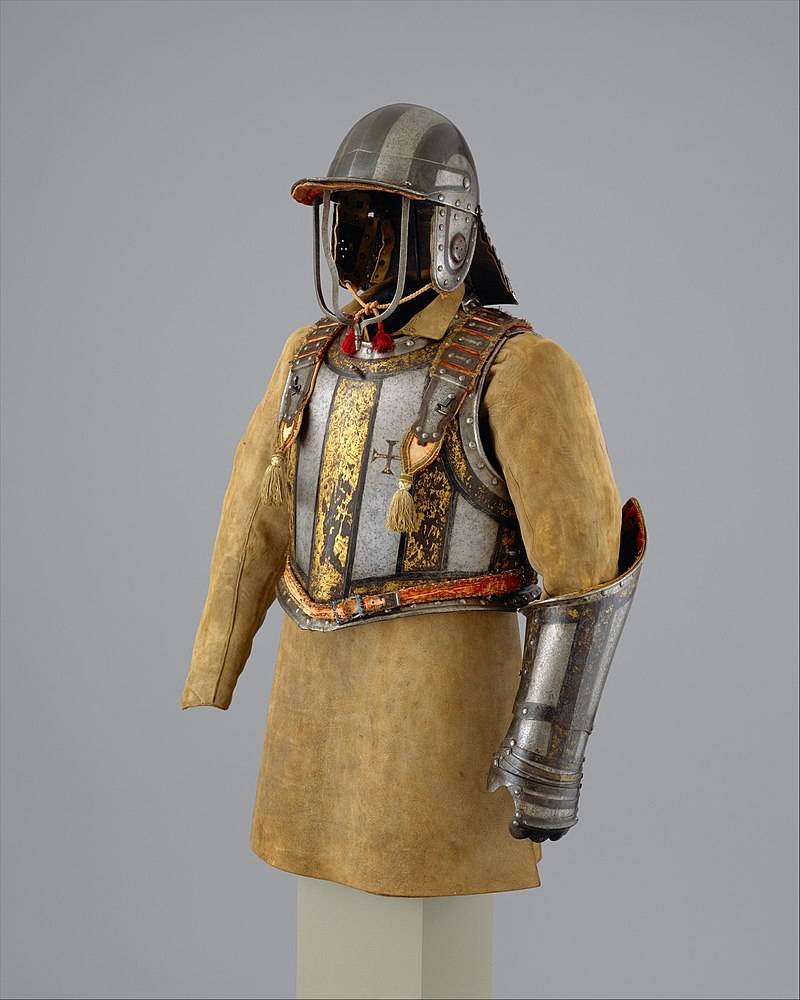 Armor of the Horse Arquebusier. Belonged to the King of Portugal Pedro II (reigned in 1683–1706). (Metropolitan Museum of Art, New York) 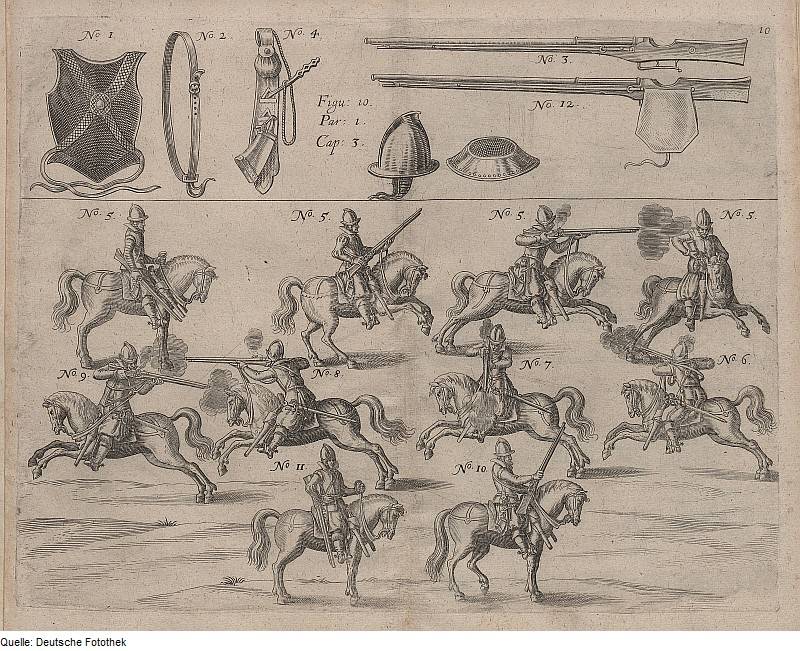 "Equipment and martial arts of arquebusiers." Engraving from the textbook for officers "The Military Art of the Cavalry" by Jacob von Wallhausen, published in 1616. (German photo library, Dresden)

The opinion of a stupid king is a tragedy, of a smart one is happiness

That is why four types of horsemen dominated the battlefields of Europe in the period immediately preceding the Thirty Years War, not counting the light eastern riders. The heaviest were the cuirassiers in three-quarters of armor, which the Swedish king Gustav Adolf, for example, considered too expensive compared to their combat characteristics; then came light cavalry, which played a secondary role in the battle and which he considered underestimated; then horse arquebuzirs, who were engaged in fire support of the cuirassier by firing from the horse, and dragoons, "horse infantry", which, in his opinion, could be used much better. 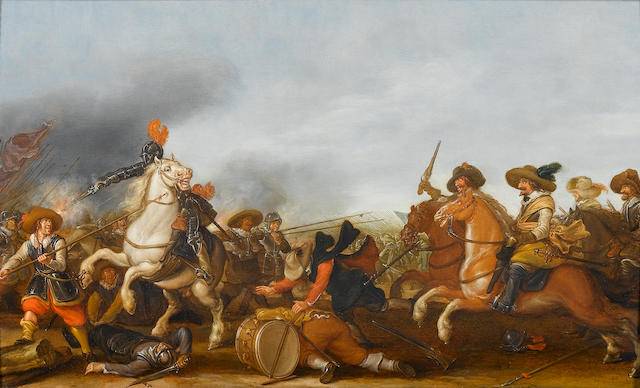 Plate cavalry fights with infantry. One of the paintings by Jan Martens de Jonge. (Private collection)
And now, being an innovator in his soul, but also just an intelligent person, and possessing the fullness of royal power, he restructured the Swedish army, made it the main fighting force of the continent and a model for reform in the armies of other countries. The logical consequence of royal preferences was the decision to get by with only two types of riders: dragoons had to take on the role of fire support, and light riders, who were to become its shock units. He also did not completely abandon the cavalrymen, who mainly consisted of the Swedish nobility, in “three quarters” armor, but now they did not greatly affect the nature of military operations and did not play a serious role in the army of the Swedish king. 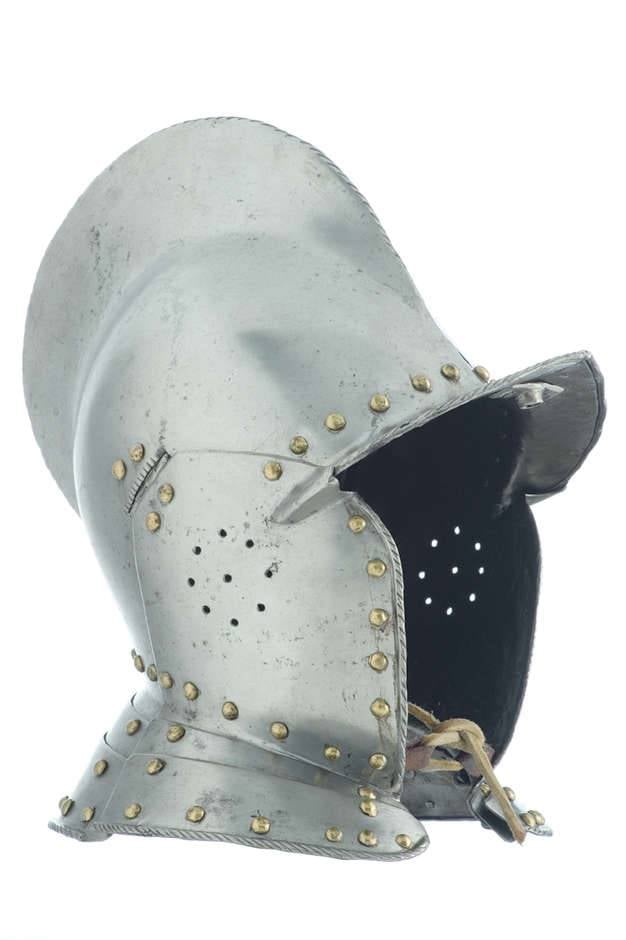 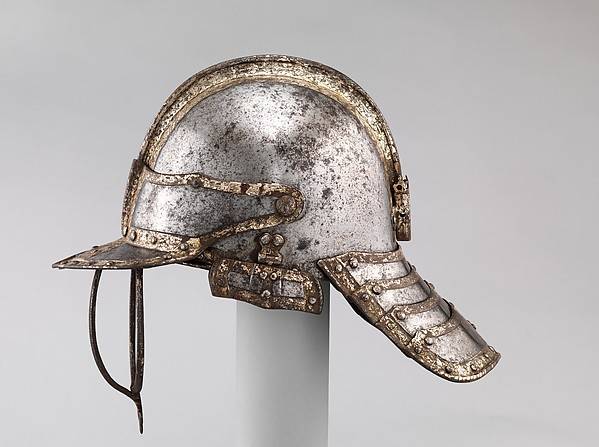 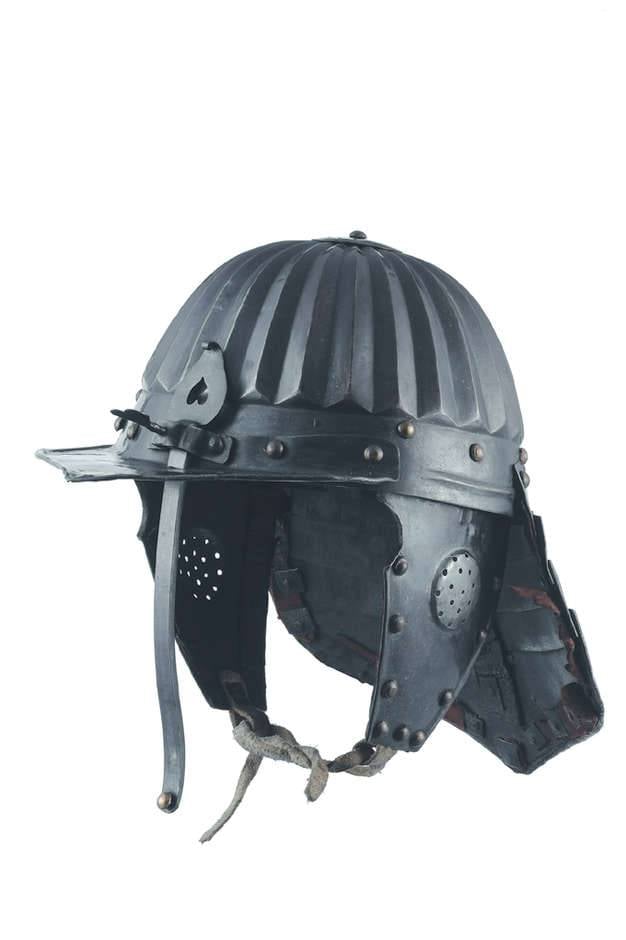 "Pot" in the European manner. (Arsenal in Graz, Austria)

Over time, the standard Swedish cavalryman from that time began to relate to the cavalry of the "middle" type. He wore a cuirass and a "pot-helmet" ("sweat" in English) (or a large hat with a metal frame) and was armed with a pair of pistols and a heavy sword of slightly greater length than other European armies. The tactics of such riders was to use cold weapons; only the first line used firearms, and fired at the enemy during the attack at point-blank range. On paper, the number of the regiment was eight companies of 125 people each; in fact, only four companies could be in the shelves. 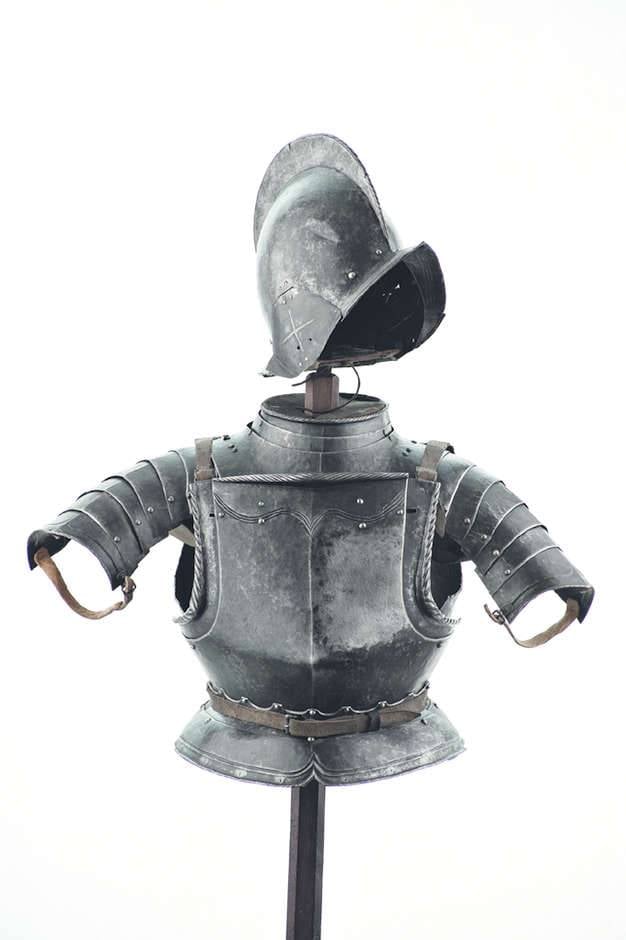 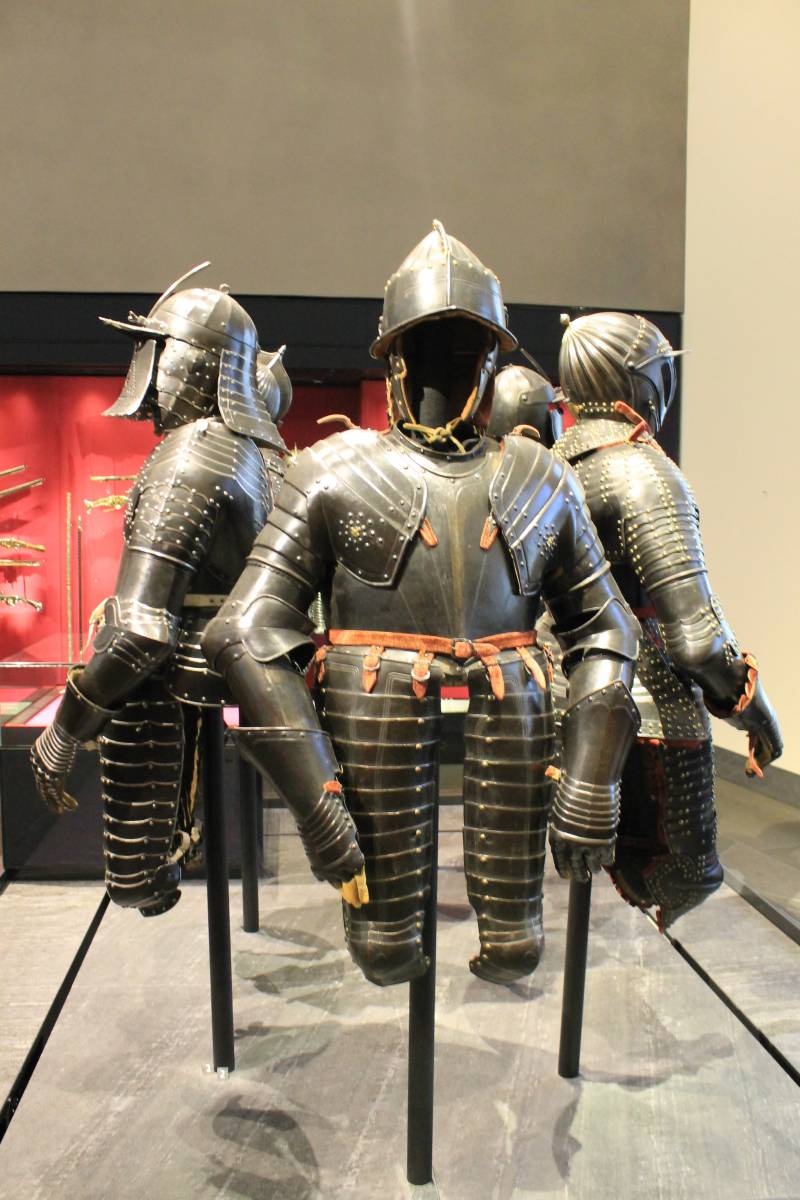 Cuirassier Plate of the XNUMXth Century (Armory of Dresden)
One of the best cavalrymen in the Swedish army was the Finnish riders, known as hakkapeli, a name that came from their battle cry, meaning "chop them!" 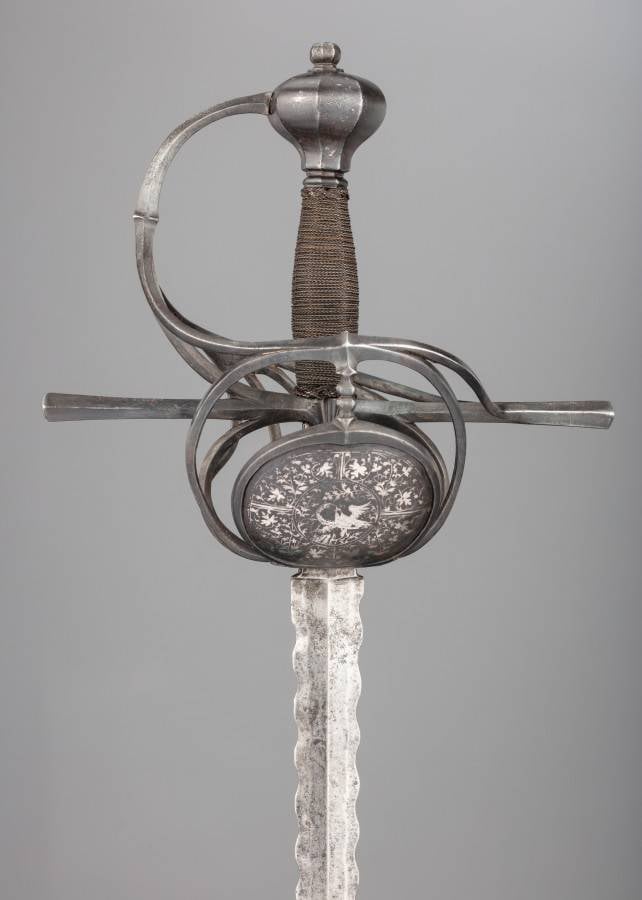 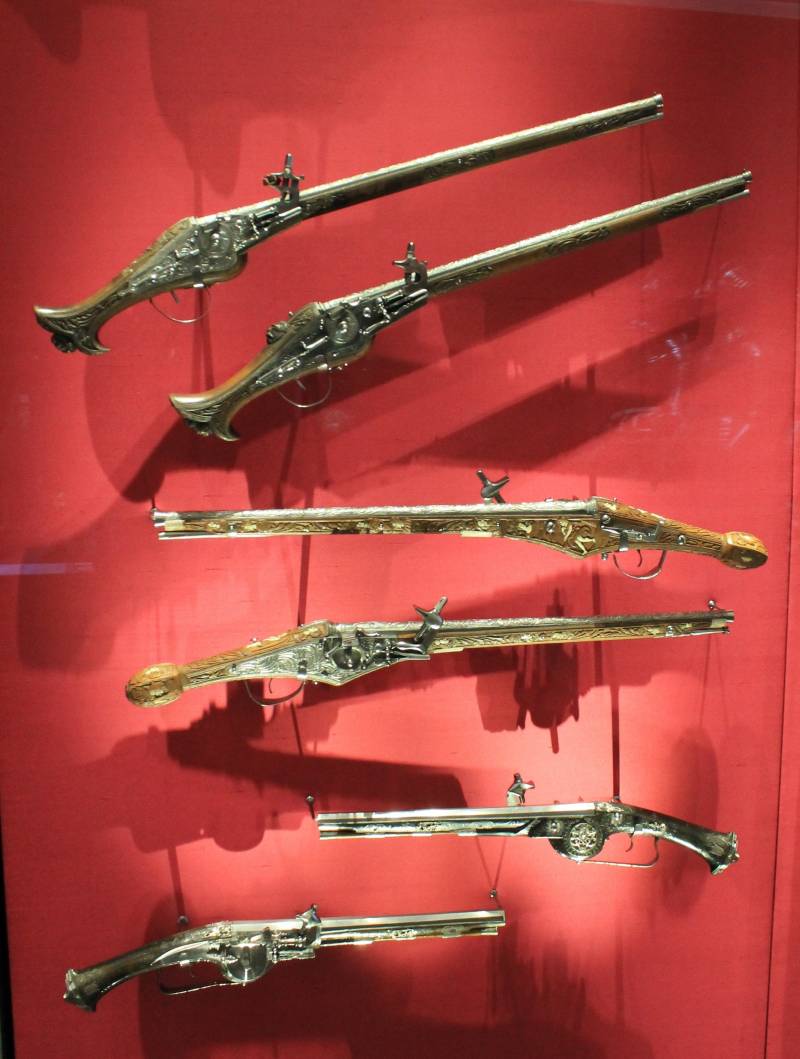 Cavalry pistols of cuirassiers. From which it was possible to shoot, and after the shot also to use as a club! (Armory of Dresden)
With such troops, Gustav Adolf won many victories, fighting in Europe during the Thirty Years War, however, he himself fell on the battlefield at the Battle of Lucene. 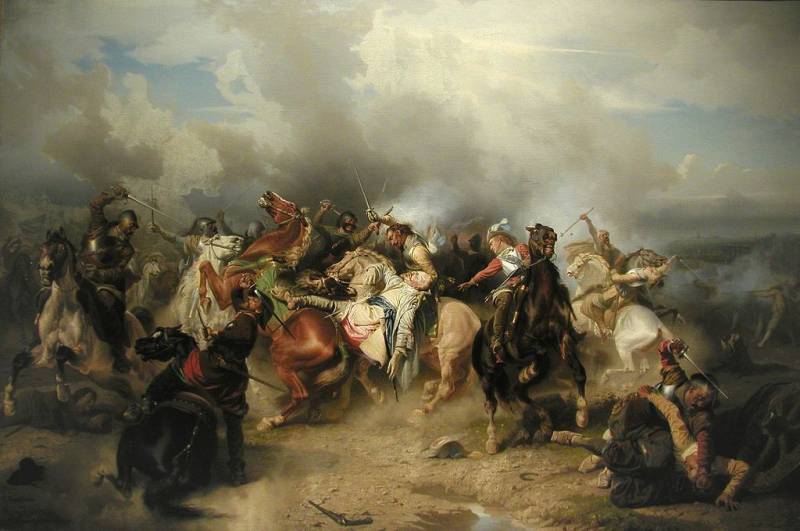 However, both the Swedes and the imperial cuirassiers had very worthy opponents in the Commonwealth. A participant in the battle of Vienna (1683) witnessed the attack of 3000 Polish winged hussars on the Kalenberg slope on the Turkish army and described it this way: “The hussars attacked the godless Turks like angels from heaven”, clearly referring to the wings attached to the backs of the hussars armor. And yes, indeed, these riders, dressed in richly decorated "three-quarter armor", with blankets and cloaks from the skins of a bear, a leopard and a tiger, as well as wings made of feathers of an eagle, a swan and a wild goose, with long spears with colored pennants , struck the imagination of contemporaries. Many contemporaries wrote that they were the most beautiful riders in the world: metal, hides, flags and noble horses, all this was truly amazing and at the same time formidable sight. 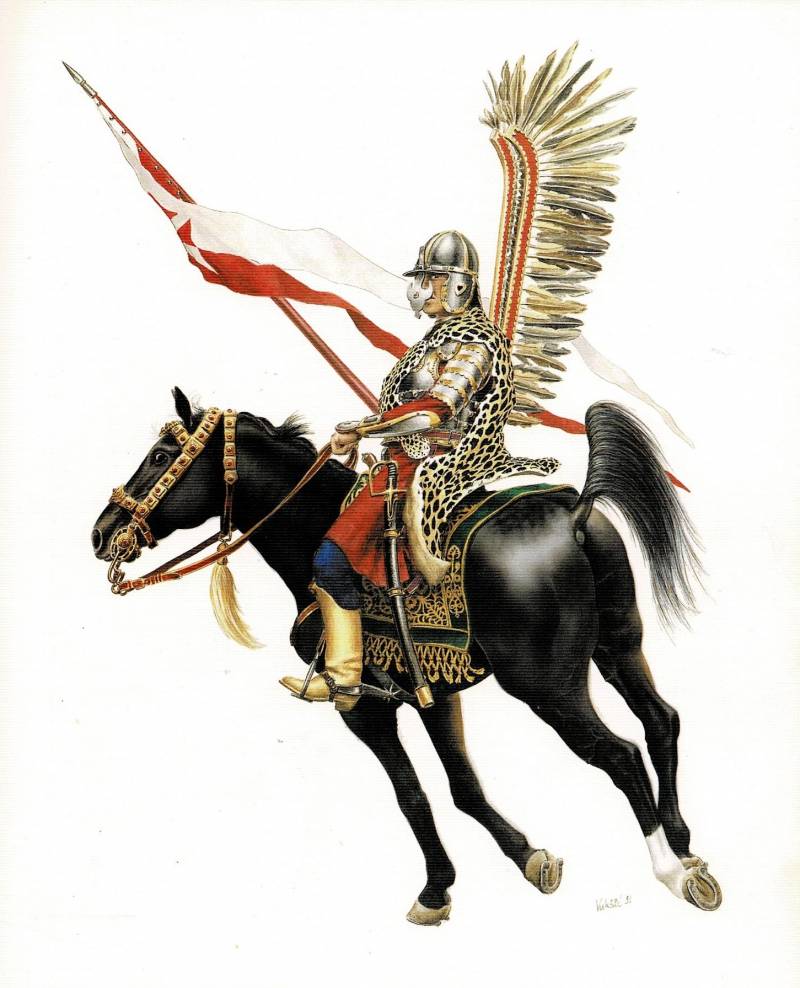 The Winged Hussar. Illustration from the book “Cavalry. The history of fighting elite 650BC - AD1914 »V.Vuksic, Z.Grbasic
Many drawings, prints and written sources of the XNUMXth century depict or describe these “winged horsemen”. According to one source, this original tradition came from Asia and was accepted by the nations that became part of the Turkish Empire. Another finds him in medieval Serbia. In addition to its purely decorative function, it was believed that the wings give the rider "the ease and speed of a bird carried by the wind," and, presumably, they did not allow him to throw a lasso on him and hit the saber in the neck from behind and from the side. Well, and of course, giving the rider growth, such equipment frightened the enemy horses, and the riders themselves.

However, the “winged horsemen” of the 1601th century are usually identified precisely with Polish plate hussars, and all because for almost a hundred years the Polish cavalry dominated the spaces of northeastern Europe. With the motto: “First we will defeat the enemies, and then count”, they defeated the Swedes at Kokenhaussen (1610), defeated the Russian troops at Kushino (1651), the Cossacks at Berestechko (1621), and beat the Turks in 1673 and in 1683, but their main victories were the battle at the walls of Vienna and the battle of Parkan (XNUMX). 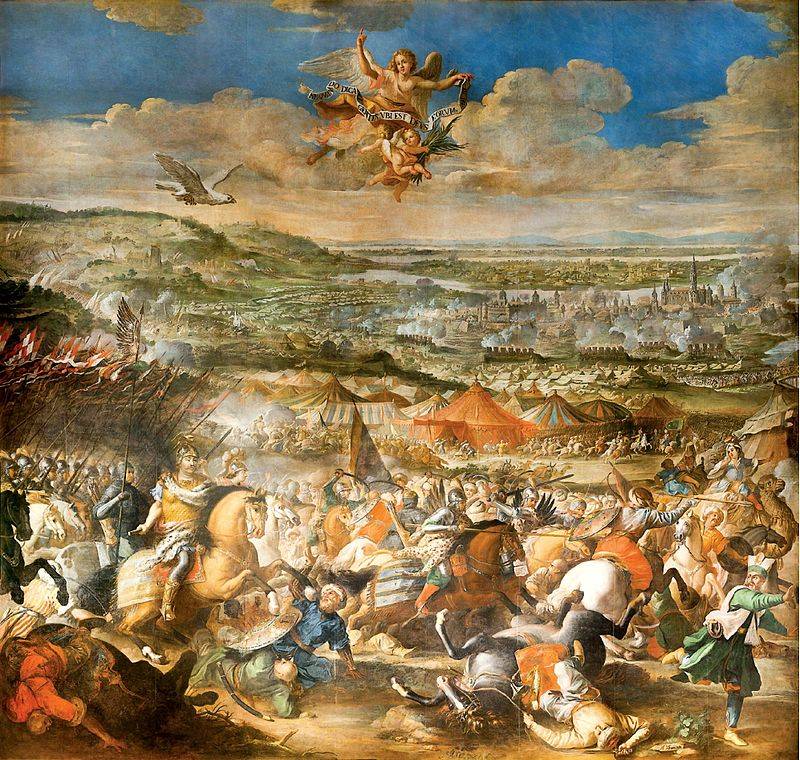 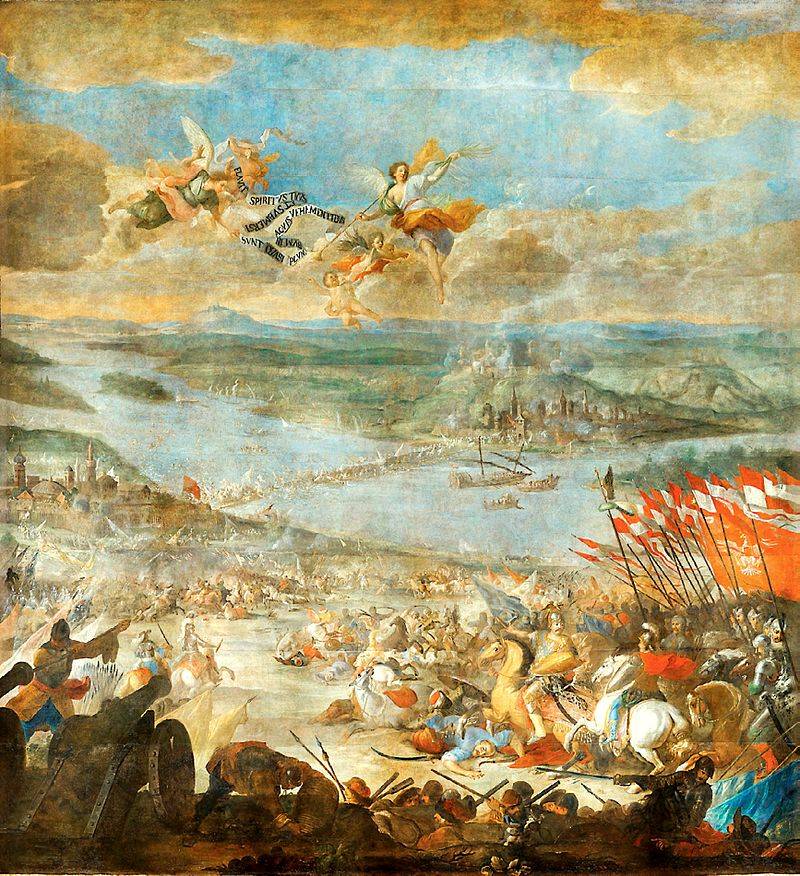 “The Battle of the Parkans” (1693-1695; dimensions 886 × 782 cm). Hood. Martino Altomonte. (Lviv National Gallery of Art) It is considered the largest battle painting in Europe. By the way, the famous "Battle of Grunwald Jan Matejko has dimensions 426 × 987 cm
The hussar's breastplate in front could withstand a shot from the musket from 20 steps, while its back was impenetrable for firing a pistol at point-blank range. The most frequent gilded jewelry on the breastplate was the image of the Virgin Mary on the left side and the cross on the right side. In addition to a heavy spear 5 meters long, the hussars had a saber-shipbuilder, a straight sword-konchar 170 cm long (transported to the left of the saddle), as well as two pistols in saddle holsters. That is, in fact, they were the same cuirassiers, but with more advanced weapons, which was based on the experience of using plate riders. The spear helped to fight the light cavalry and infantry, which was deprived of cover of pikemen, pistols - turned the “winged hussars” into the same cuirassiers, but when the spears were broken or could be thrown, a stabbing sword came to the aid of the rider. He had no sharpening on the blade, but they could hit the infantryman who fell to the ground, and any rider with a shorter saber or sword. No wonder it was with swords that the British cavalrymen were armed on the eve of the First World War. It turned out that pricking is easier than chopping. Since the piercing blow is not only more dangerous, but also applied for a split second rather ... But a saber, while you swing it ... 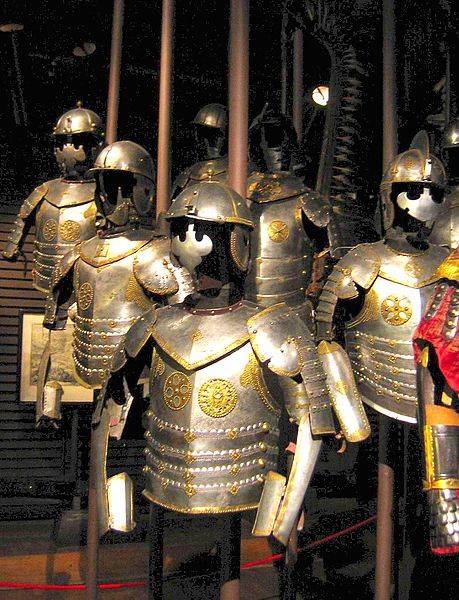 Armor of the Polish Hussars (Museum of the Polish Army, Warsaw)
In addition, the armor of the Polish hussars, in particular, the same cuirasses, as well as, by the way, like many English knights of the first half of the XNUMXth century, were recruited from bands connected by riveting. It turned out that such "typeset cuirasses", firstly, are easier to do, and secondly, they were stronger than solid forged ones. Stripes turned out to be easier to temper! 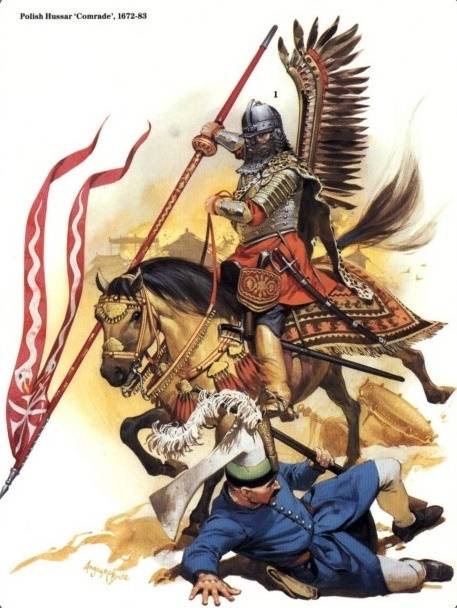 Polish hussar in a battle with Turkish janissaries. Fig. Angus McBride
The Kavaleria Kassel edition reports that the hussar’s cuirass was so strong in front that it could withstand a shot from a musket from a distance of 20 steps, while its back was impenetrable for firing a pistol at point-blank range. Moreover, the breastplate of cuirasses was customary to decorate. The most frequent gilded decorations on the breastplate were images of the Virgin Mary on the left side and a cross on the right. The helmets had a movable fixed nasal, often with a highly developed forerunner, which gave the rider's face additional protection.

Hussar detachments (gonfalons) consisted of 150 people who were either recruited according to the territorial principle or belonged to some major Polish magnate: Radziwill, Sobesky, Pototsky, Sienovsky, Lubomyrsky, Race and so on. Each unit had a distinctive pennant for identification on the battlefield, and each hussar during the campaigns had from one to two servants, as well as a corresponding "baggage" in the wagon train.

PS There were a lot of materials about the “winged hussars” in Russian publications, such as, for example, the magazines Tseikhgauz and Voin, and there this topic was examined in great detail. Therefore, here it is given on the basis of foreign sources and only with reference to the general theme of the series.

Author:
Vyacheslav Shpakovsky
Articles from this series:
Polish shells, Austrian hussars and Turkish fives
Enemies of the Cuirassiers
With whom the latniks of the emperor Maximilian fought?
“A small discovery in the butt of an arquebus ...”
Horsemen of the Eighty Years War
Horses and saddles of the XVI-XVII centuries
“By people and by horses, not by aer”
Ordonance companies
“It's a miracle if someone is killed with a spear”