“A small discovery in the butt of an arquebus ...” 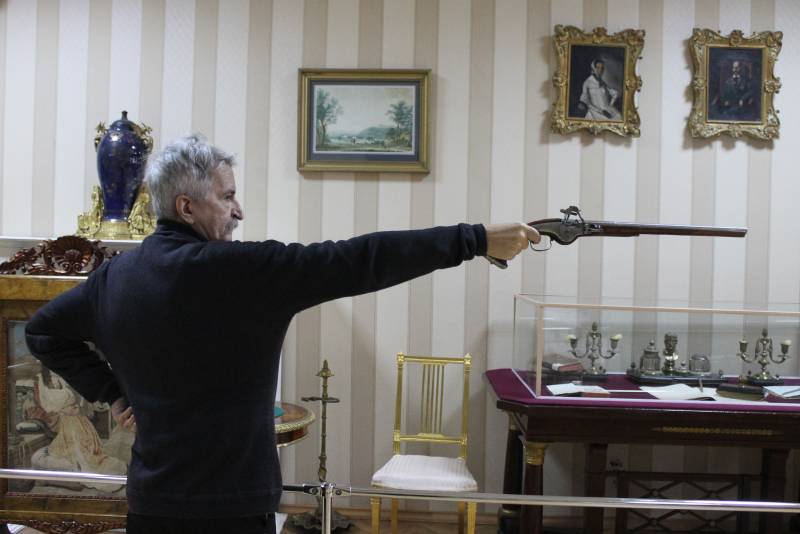 The author with a wheeled pistol in his hand (right view) in the hall of the Penza Museum of Local Lore. It turned out that it is not heavy at all and is very comfortable to hold, despite the great length.

"Gentlemen, you get involved in a nasty history and you will be riddled with bullets. “My servant and I will treat you with three shots, the same amount you will get from the basement.”
A. Dumas. Three Musketeers"

Military affairs at the turn of the eras. The amazing thing is the life and destiny of man. He once wrote that since his childhood the “Black Muzzle” has been humming, not knowing that this is the anthem of the Italian fascists, and that fate has predetermined for me not only to find out, but also to write an article about it in “VO”! But the most, perhaps, the most amazing event happened on the 28 of November, and ... I’m sitting right now writing about him and I can’t stop wondering him. And it so happened that in the distant Soviet childhood they brought me to our Penza Museum of Local Lore and for the rest of my life it struck me in the heart. And what was there only: a huge skeleton of a mammoth and only a little smaller - a woolly rhino. Illuminated dioramas with species of the Proterozoic, Paleozoic, Mesozoic and Cenozoic era. Triceratops and tyrannosaurus, cavemen stone cave bear ... Soldier Suvorov in full growth! The gun on wheels! Model of the Penza fortress at the time of foundation in the 1663 year! Mauser in a holster, the German assault rifle Sturmgever. In a word, it was possible to walk on it for a long time, but there were just a lot of exhibits in it. Especially for a little boy. 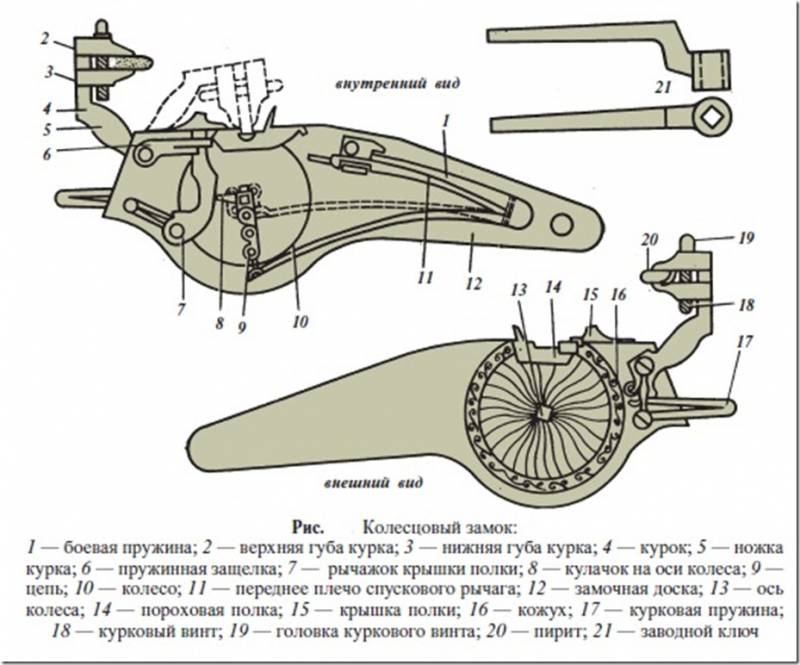 The scheme of the wheel lock device.
But I remember well that I was particularly impressed by the “West European Musket XVII” and the “flintlock pistol”, with a large wheel on the side to the right. It was decorated in a minimal way and therefore looked especially impressive. 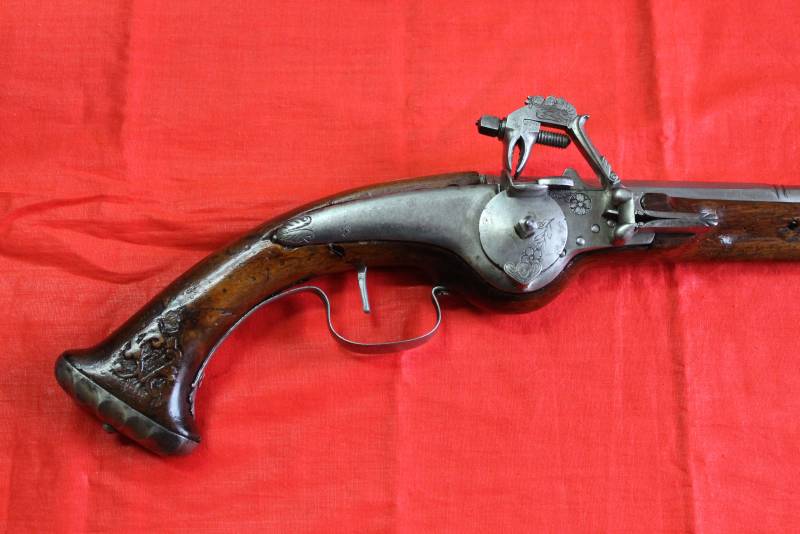 The handle and mechanism of the Penza wheel pistol.
Well, then my wife began to work in this museum, and I literally cried and slept there. For the exposition, he made them models of the ships on which the Penzens served: “Potemkin”, “Aurora”, “Oleg” and “Ochakov”, the T-34 tank “Penza Komsomolets”, which was bought with clear money, and the first Soviet tank “ M "..." to the heap. " He worked in their archives and in the library, he remade all the magazines “Soviet Archeology”, all the magazines “The Great War”, the whole “Niva” ... In a word, it was a wonderful time. That's just the gun and the "musket" just then put into the storeroom and I could not hold them in my hands, but I honestly did not try. 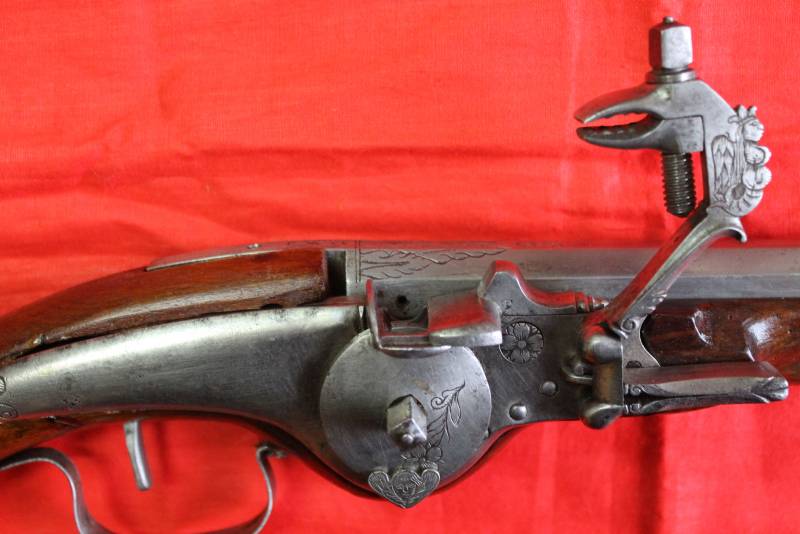 The trigger with sponges for clamping pyrite and the lid of the shelf are clearly visible. The lid is moved and the ignition hole is visible. Also on the scroll wheel when enlarging the photograph, the transverse spark-groove is clearly visible.
And so the years passed, but what years there - decades! On "VO" began to go out my materials on arms past eras. I managed to admire the same wheeled pistols (and they are closer to knightly times than shock-flintlocks with a French battery lock!) In the museums of Dresden, Vienna, Paris, Venice and here, just the other day, I remembered that there are weapons “With a wheel” in our Penza Museum of Local Lore. Remembering how reluctantly they reacted to my requests there in recent years, I honestly went there with some apprehension. But it turned out that the leadership there changed and met me there, one might say, just sincerely. They brought both a gun and a gun and provided the opportunity for photography. 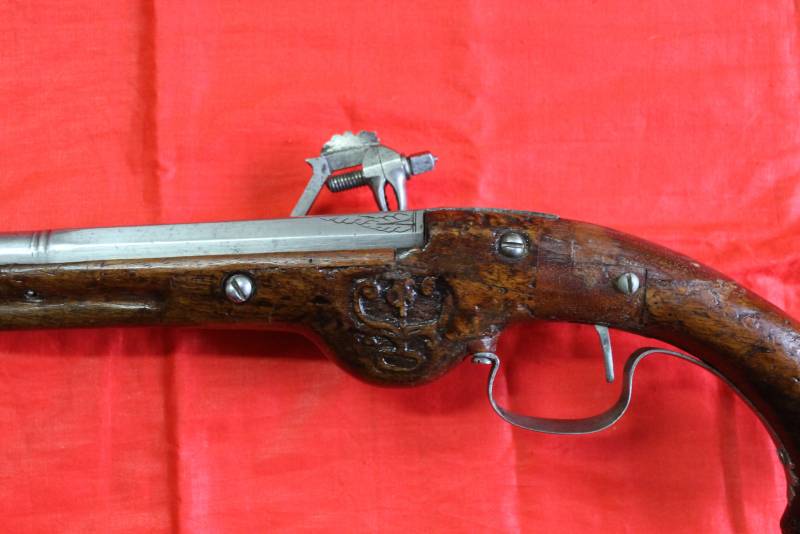 View of the gun on the left. By the way, his caliber was 13,5 mm. That is less than that of the Russian pistols of the 1812 war of the year, which was equal to 17,78 mm
It was very strange to hold a cuirassier’s wheeled pistol in their hands with a long barrel and no front sight, that is, obviously the 16th century, when they were shot at almost point blank range from an enemy dressed in armor, which is why he did not need a front sight. But even more surprising was considering the arquebus. It was not a musket, of course, but a light arquebus with a caliber of only 12 mm. First of all, it became obvious that this is not a military weapon. Engraved patterns on the trunk, on the keypad. In addition, the wheel on it was secret, and this was never done on military weapons. And the caliber is too small, such a bullet of a rider dressed in armor cannot be killed. And not every beast can be killed by such a bullet. In addition, the trigger was most likely equipped with a sneller. In any case, it is unlikely that what was found inside the trigger guard could be something else ... True, the springs of the triggers on the pistol and on the arquebus were missing and I could not “click”. Here, apparently, the "competent authorities" tried. The weapon, after all, was it ... But everything else worked properly, that is, the trigger could be opened and closed, and the lid of the ignition hole also worked perfectly. And judging by the design of analogues and their appearance, it could refer either to the end of the XVI, or to the beginning of the XVII century. Well, to be used ... as a target weapon, for entertaining target shooting! And if now dozens of varieties of AR-15 are being produced specifically for such shooting, then why not produce something similar for those who like to shoot at that distant time ?! 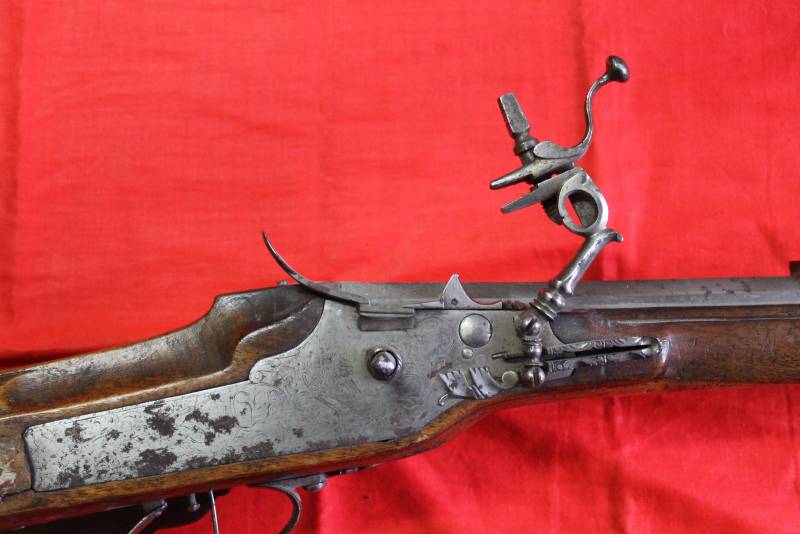 View of the keyboard and the trigger. The lid of the shelf covers the ignition hole and the powder shelf. 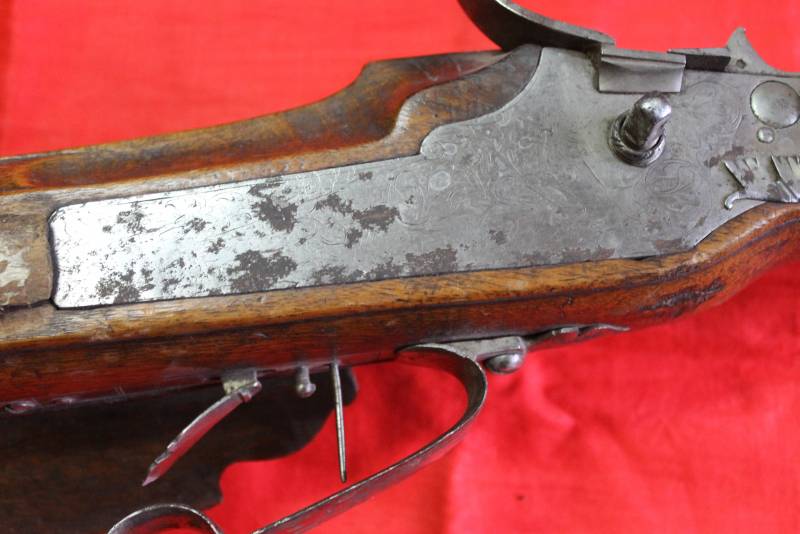 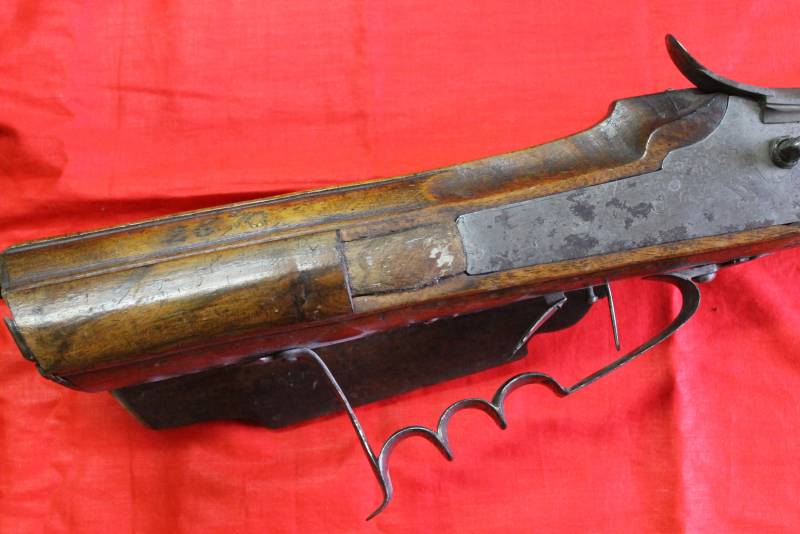 Butt with a characteristic subcutaneous protrusion on the left, trigger, sneller and pencil case cover.
Well, in general, I began to consider the butt, and on it on the right side is a pencil case, closed and held in this position by a latch. I ask the employees: “Have they opened it?” No, they say, we are afraid to break it! Well, I knew how such latches open and where to press to slide its cover. He pressed, pushed, opened, and there, in the recess of the pencil case, several lumps of crumpled paper. And again, paper and paper. But ... that was exactly what bullets should have looked like, which the arrows often wrapped in paper before pushing them into the barrel. And when we unfolded these lumps, they really contained bullets cast with a bullet (they had a slice on them!) From lead, which were oxidized in order. 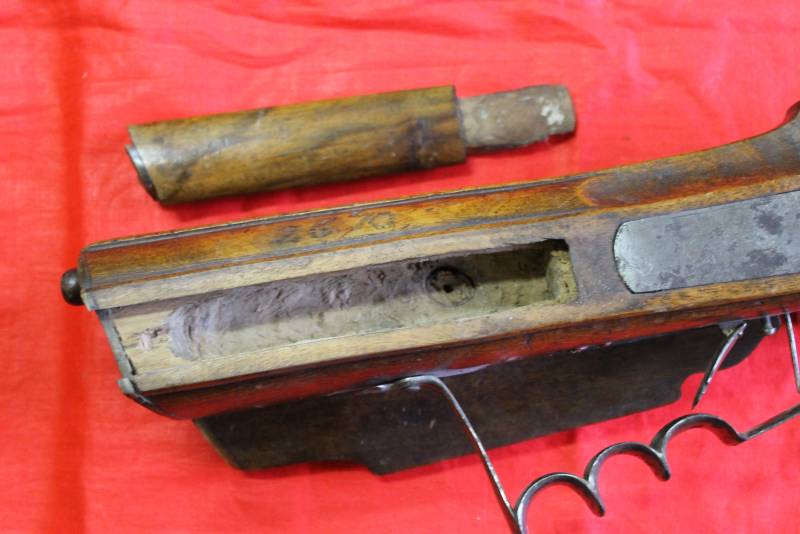 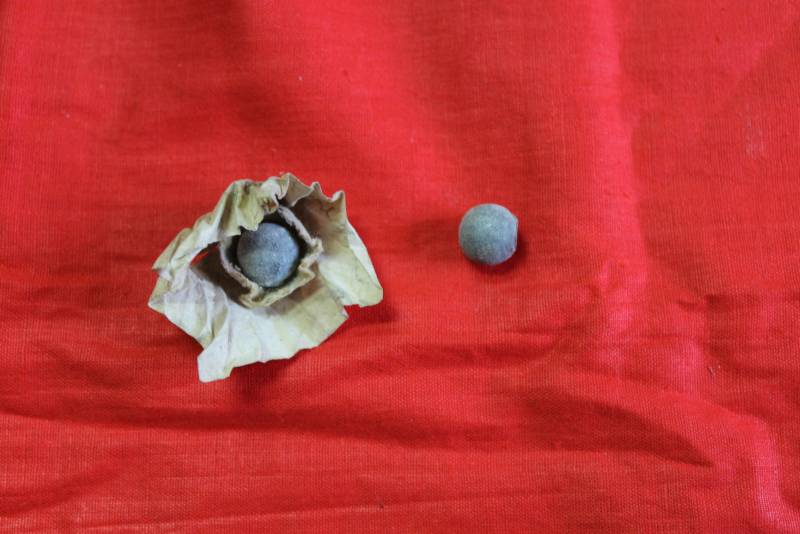 Bullets, and pieces of paper in which they were wrapped.
But the most interesting was one "piece of paper" on which inscriptions in German with all the curls accepted then were preserved! That is, no one has opened this pencil case since the last time they fired from this gun! The shooter put the bullets in a pencil case, wrapping them in advance with pieces of paper that were at hand in order to use them as a wad. He used a part - there was a place left in the pencil case, but he didn’t shoot three bullets and ... forgot that they were there. And then ... then centuries have passed! A ramrod, a repair key, a screwdriver, which should have been tied to a trigger guard by a strap, were lost from the gun. The gun was sold and resold. He was examined by our valiant police and ... could not open this pencil case and find these bullets. Museum workers, and the arquebus came to them somewhere at the end of the 40, either from the funds of the Artillery Museum in Leningrad or from the police confiscation, where she, in turn, got from some landowner estate, also did not pay attention to this pencil case ... I was admiring her as a seven-year-old boy, and now 62 of the year passed, and I finally got her in my arms and found a thing that no one had ever picked up since then. So amazing. Now museum workers want to turn to linguists, specialists in the Middle German language, to try to read at least some of the words written on this piece of paper. 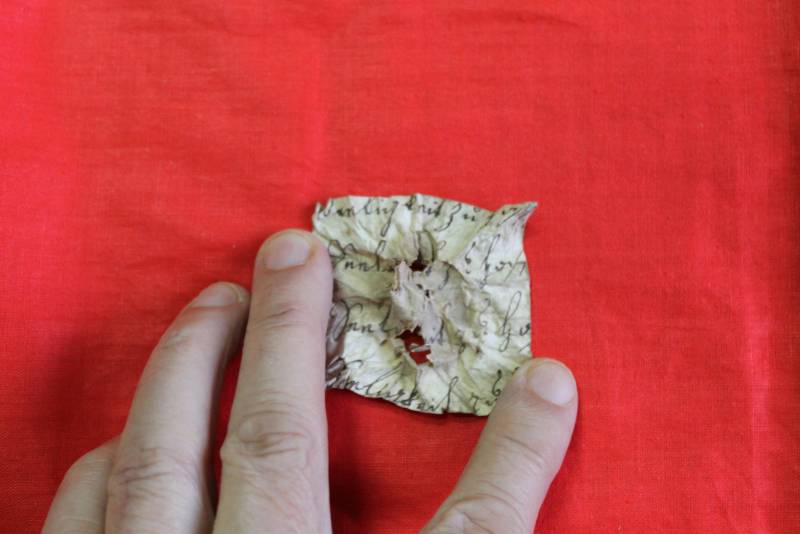 A piece of paper with text in German.
Another small discovery for me was the design of the spark-producing wheel itself. Everywhere it is written that it was notched. And I imagined, but I’m sure that I’m not alone, but everyone who didn’t hold the wheel pistol in their hands, that it had a transverse notch, like a wheel on a modern lighter, that is, it looked like a big fine-toothed gear. And no! In fact, on the wheel (both the gun and the pistol!) Were ... longitudinal grooves, and quite deep. And there were also transverse notches, single (!) Of no more than six on the whole wheel! That is, when you turn the wheel when you press the shutter, it touches about pyrite only once and that’s all! But at the same time it turned out not one sheaf of sparks, but several, according to the number of grooves, or rather protrusions between them with transverse recesses. Pyrite fell into them, pressed by a spring to the wheel and - and so there were sparks that set fire to the powder. 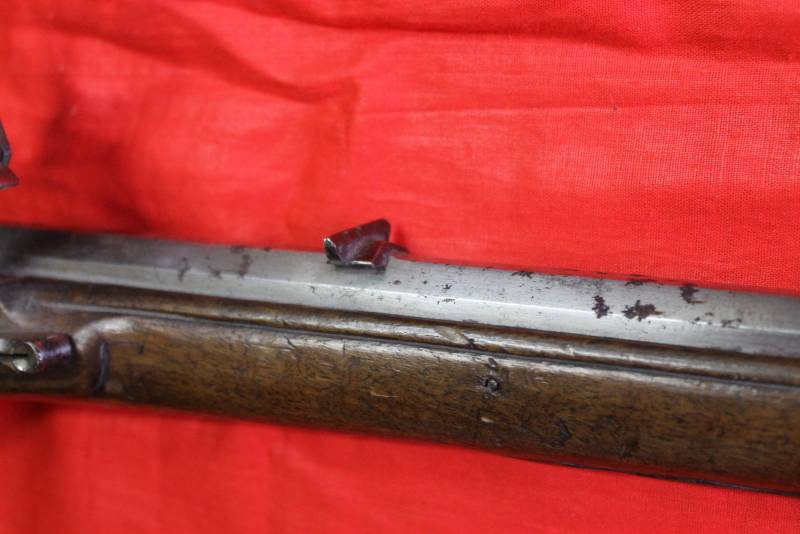 The sight on the barrel was very simple: a visor with a semicircular notch. 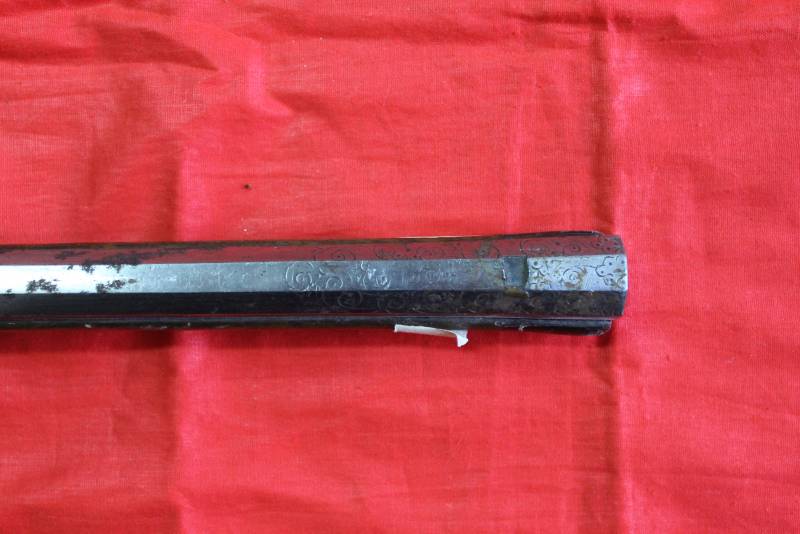 But the fly, soldered with tin, alas, could not resist. The faceted barrel itself has eight faces, and to the muzzle end it elegantly expands with a small bell.
That's how historians make their little discoveries and ... rejoice! However, in our Penza Museum of Local Lore there is still a lot of interesting things, so the time has come to write about it ... 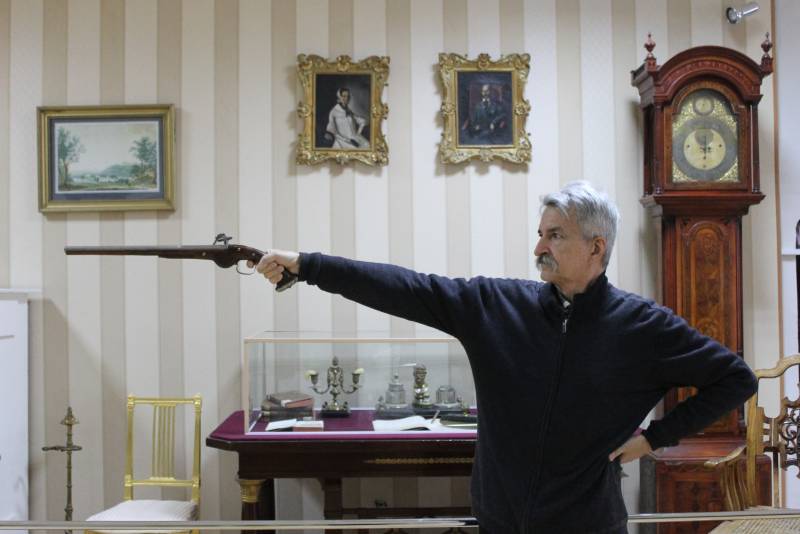 Author with a gun. Left view.
PS The administration of the VO site and the author are grateful to the staff of the Penza Museum of Local Lore for the opportunity to explore the artifacts available in their museum and take their pictures.

Author:
Vyacheslav Shpakovsky
Articles from this series:
Horsemen of the Eighty Years War
Horses and saddles of the XVI-XVII centuries
“By people and by horses, not by aer”
Ordonance companies
“It's a miracle if someone is killed with a spear”