“It's a miracle if someone is killed with a spear” 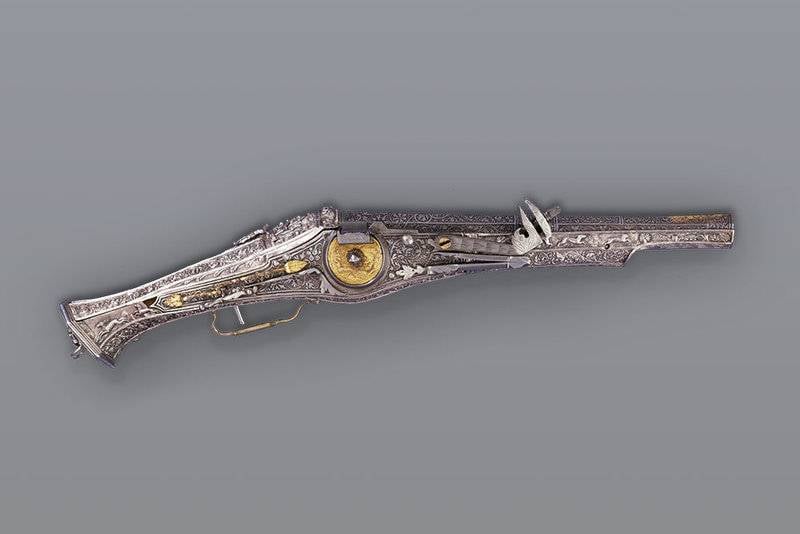 Wheel gun: weapon, which created a new kind of troops in Europe - the cavalry of pistols. Pistols made for noble people got off very richly. Sometimes the surface of the tree behind all kinds of inlays was simply not visible. (Imperial Arsenal, Vienna)

Military affairs at the turn of the eras. It just so happened that in the Middle Ages in Italy, wars practically did not subside. But the endless wars between the Guelphs and Ghibellines, that is, the papal throne and the emperor of the Holy Roman Empire, especially bothered everyone. Naturally, the decline in people was enormous, so they started to hire mercenaries very early there (first of all, rich trading cities), equip them with knightly armor and send them into battle against the feudal nobility. And she also did not lag behind and tried to recruit mercenaries so that they fought instead of them and their children.

True, the first mercenaries were not the Italians, but the Catalans, whose troops were willing to serve for a fee in Venice, and in Genoa, and in Constantinople. Nevertheless, in Italy, condottieres, that is, condotta commanders, appeared already in 1379, when Alberico di Barbiano formed his "Company of St. George." The most interesting, however, is that from the very beginning, Italian condottieres tried to carry a “good war” in contrast to the “bad war” waged by the Germans and Swiss. Those prisoners were not taken (especially the Swiss, who simply slaughtered them like cattle!), Burned cities and villages, that is, they behaved like real barbarians. Italian condottiers didn’t do that. Since they recruited their troops with their own money, they resorted to war as such only as a last resort, and as far as possible they did without shots. They were slow and careful, maneuvered a lot and preferred negotiations and bribery to the cruelties of the “bad war”. Sometimes in battles there were not even wounded or there were only a few, and losing a mercenary for a condottier at the time was the same as today for Americans to lose an Abrams tank in some Iraq. 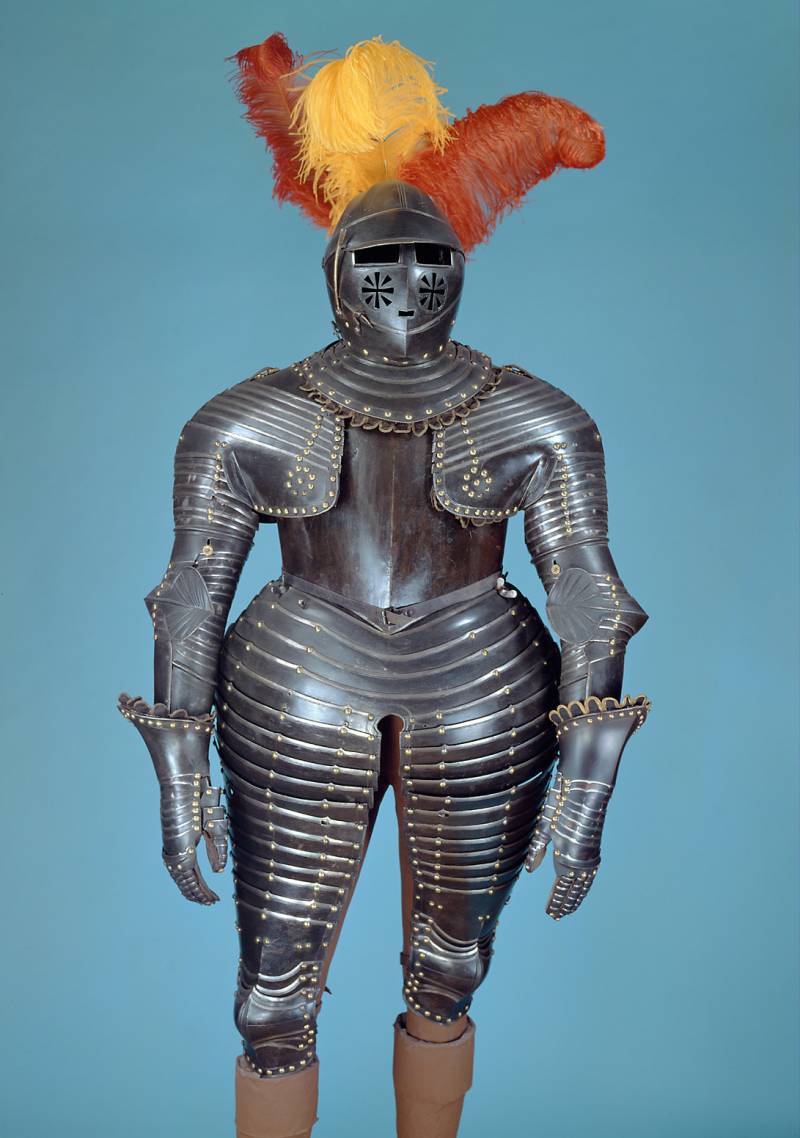 Reytra armor, approx. 1625 g. Belonged to Jacob Hannibal II, Count of Hohenhem (1595 — 1646). Master: Hans Jacob Topf, Plattner (1605 - 1628, Innsbruck). Materials: blued iron, leather, velvet. (Imperial Arsenal, Hall VIII, Vienna) Pay attention to the very lush leggings. They were needed to cover the same magnificent, padded with cotton pants
Condotta was led by the captain, and the “baners” (same as the “banner”) included in her units were commanded by the “bannereres” (“denominators”). Usually in the “baner” there were 25 “copies”, 20 of which made up the “squadron”, and 10 - “ensign”, under the command of the decurion. The “post” included the last five “copies”. He was commanded by a corporal. 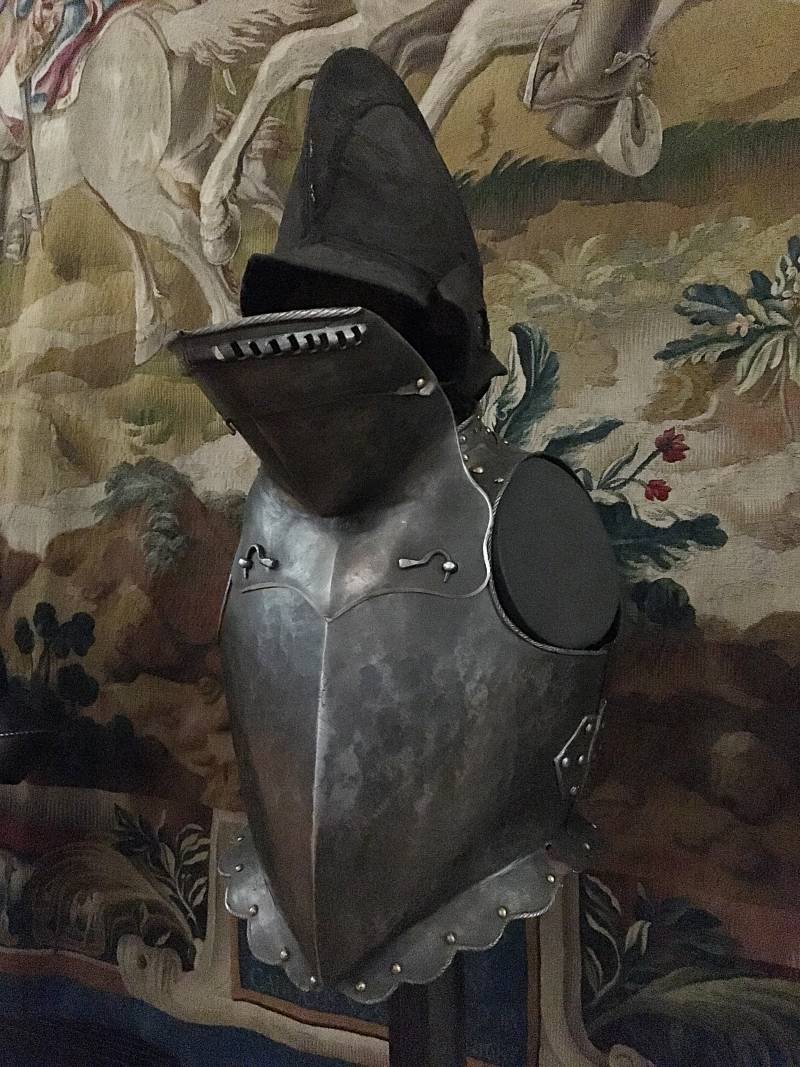 Armor with the forerunner. At the same time, the armor of ordinary infantrymen and horsemen over time more simplified and gradually reduced to a cuirass and helmet - morion or cabinet. This armor, however, is interesting in that it has a detachable predecessor attached to the cuirass on hooks. Most likely it was a spearman's gear. It would hardly be convenient to shoot a pistol and charge it with such a “shield” in the face (Imperial Arsenal, Vienna)
In turn, the Italian "spear" was smaller in number than the French and Burgundy. It included a trio of warriors: equestrian armor, his page and ecuier swordsman. The infantrymen did not enter the “spear” and in general there were few of them in the “condotta”. They were called "fancy" and from this word came the French word "fantasy", that is, "infantryman." 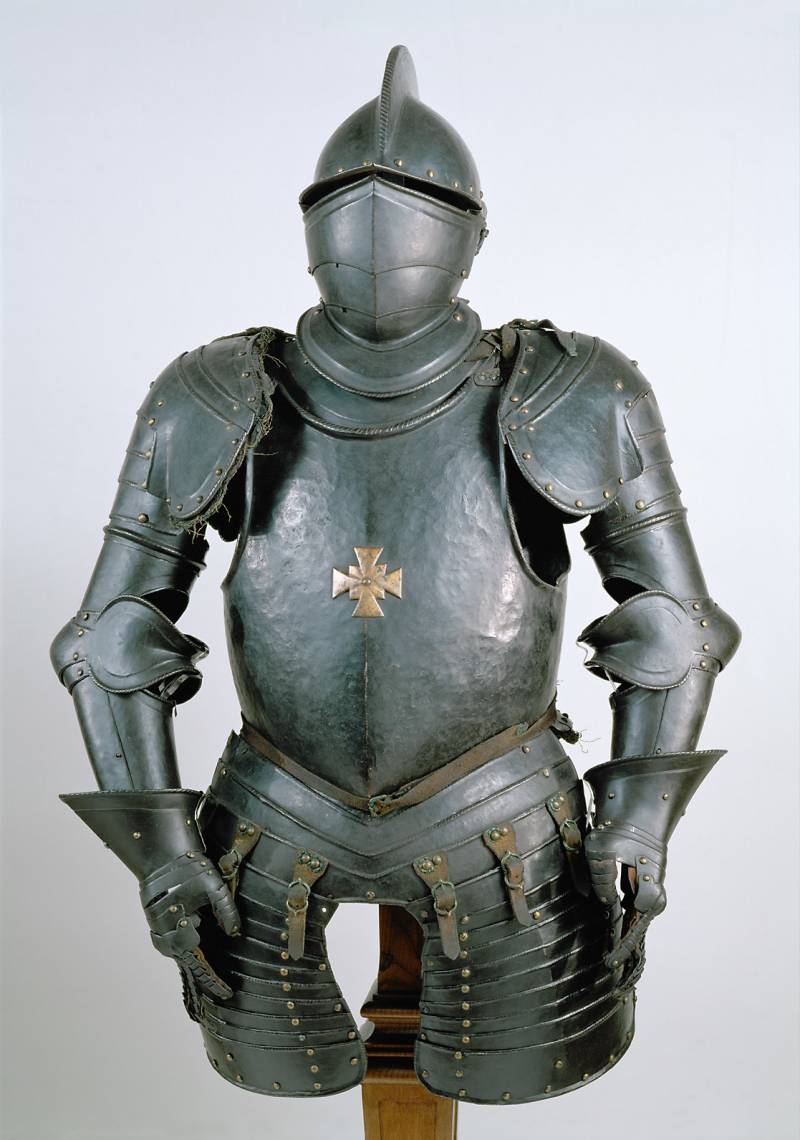 Italian horseman armor, approx. 1570 Mr. Belonged to Giacomo Soranzo. (1518 - 1599) Materials: blued iron, black velvet, leather. The extremely coarse forging of cuirasses is noteworthy. In fact, it did not even get off, and immediately after forging it was burnished (Imperial Arsenal, Vienna)
And just after the model of the Italian condottes, the Ordonance companies in France, Burgundy and Austria began to be created subsequently. Their number, as we already know, was greater than that of Italians. By this, the European monarchs tried to compensate for the worst training than the Italians, who drew their military experience in the treatises of the ancient Greeks and Romans, and which only later became available to other European peoples. 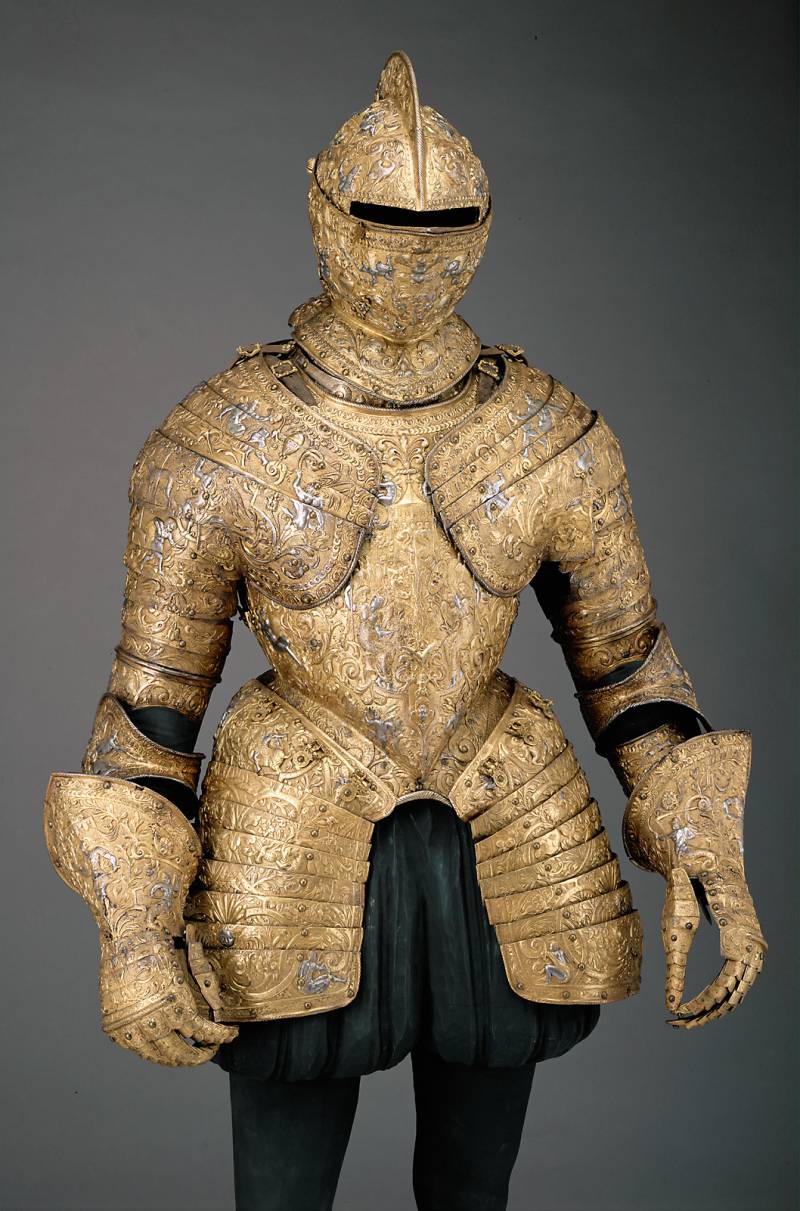 Armor made around 1570 of the year. Owners: Kings Henry III and Henry II (1551 — 1589). Currently not billed. Material: gilded iron, leather. Fittings - brass. (Imperial Arsenal, Vienna) Note that the skill of the armored masters did not go anywhere at that time, but ... on the one hand, they made wonderful examples of knightly and horseman armor, and on the other, mass cuirasses and morions were riveted in huge quantities.

The cavalry is divided into parts ...

It should be noted that progress in the field of military equipment at that time was very fast. So, arquebuses with a lid for a powder shelf, a spring trigger and a wick lock in Germany in 1475 were produced in droves. In the 1510 year they received a shield protecting the shooter's eyes from the hot powder parts, flying apart when fired, the first pistols in the same Germany appeared already in the 1517. Moreover, it is believed that the same wheel lock for the gun was invented by Leonardo da Vinci somewhere around 1480 - 1485. The first wick pistols appeared at all around the year 1480, but they were inconvenient for riders, so they were not widely used at first.

However, at first all the innovations were aimed precisely at stopping the avalanche of horsemen riveted in armor, who in the past primarily lacked only one thing - discipline. To resist the attacks of the gendarmes, dressed in such perfect armor that they did not even need shields, could only be one way. Set against them a picket fence from the peak. And the foot soldiers massively turn into pikemen, and the length of their copies increases to 5 and even 7 meters. Owning such a “superpeak” was difficult, but even the most untrained recruit could afford it. All that was required of him was to rest it on the ground, to press it with his foot, and with both hands to direct towards the approaching riders, while trying to stick her horse in the neck or hit the rider. It is clear that he could not break through the armor, but having hit such a peak, the rider risked flying out of the saddle, and a fall in 30-kilogram armor to the ground usually put him out of order. 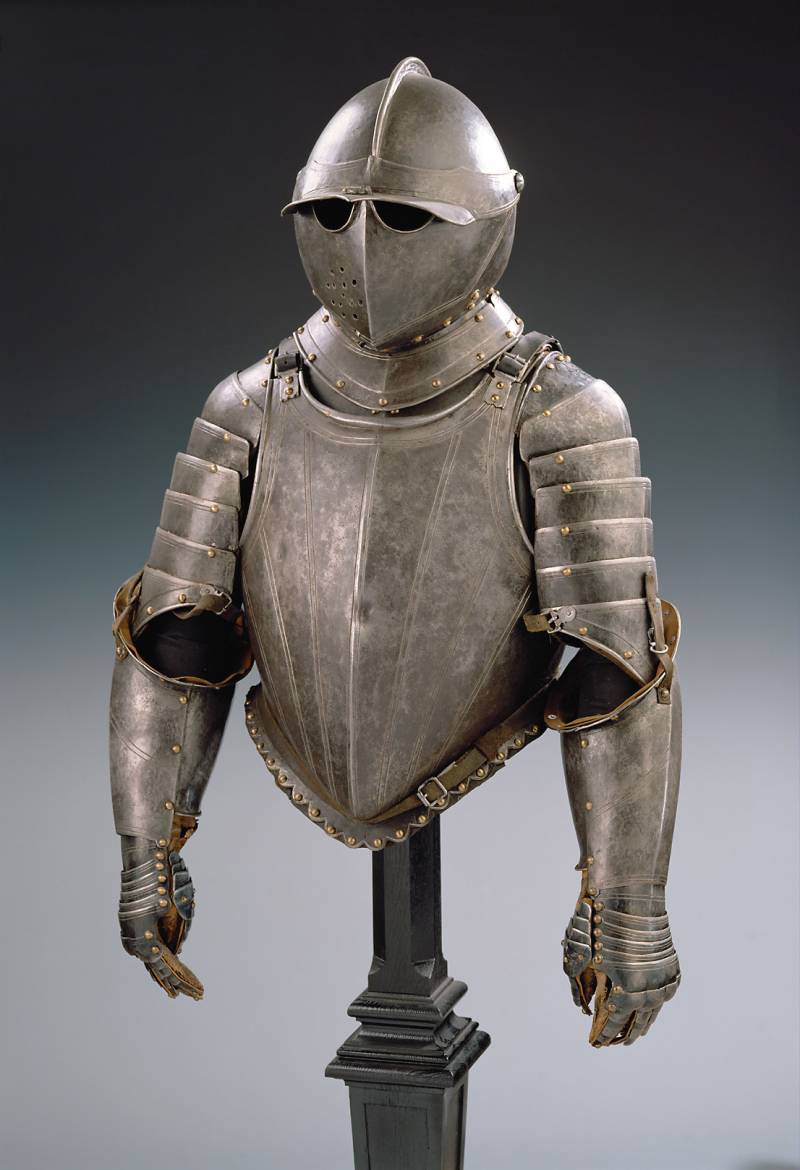 Half-armor belonging to Freicherr Johannes Baptista (1552 - 1588). OK. 1585 d. Materials: black etched iron, leather, green linen lining. (Imperial Arsenal, Hall VIII, Vienna). Over time, the “three-quarters” armor completely gave way to such half-armor. These armor had no elbow pieces at all. Their role was played by trumpets of plate gloves. Trace from the bullet in the most prominent place, most likely - a kind of quality mark
And, of course, it was most convenient to kill such horsemen with other horsemen, namely, horse-drawn arquebusiers, who appeared in the French army by decree of Francis I in 1534. By this time, in addition to the gendarmes, light-mounted chevolier riders appeared in the French cavalry, used for reconnaissance and protection. Now 10-50 people of horse arquebusiers were added to each company to them. And immediately it became clear that in order to shoot from the arquebuses, they did not need to get off the horse at all, which was very convenient in all respects.

Rapier with a "flaming blade." Around 1600 of the year, Northern Italy, Milan. The sword was replaced by a sword at this time, as well as a crossbow - an arquebus and a pistol. Decorations of the hilt in the form of the heads of the Moors are a tribute to the tradition born of traveling to exotic countries (Imperial Arsenal, Hall VIII, Vienna)
Then the varieties of light cavalry began to multiply in number more and more, and the cost of their weapons decreased. Dragoons appeared - speargun dragoons and arquebuzir dragoons, which in essence became an analogue of pike-infantry and arquebuzir infantry, carabinieri are natives of Calabria. Armed with carbines or escopettes with rifled barrels, as well as “Albanians”, also called Estradiots, dressed as Turks, only without a turban on their heads and wore a cassette, cuirass and plate gloves. The latter, for example, were hired by Louis XII to fight in Italy, and the Venetians - to fight with Louis. At the same time, they paid a ducat for the head of every Frenchman, so it was not cheap to hire them!

A rapier, circa 1600, belonging either to Emperor Rudolph II himself, or being his gift to one of his favorites. Blade: Pietro Formigano, (approx. 1600, Padua) Handle: Daniel Sadeler (metal cutter, before 1602 - Antwerp) (Imperial Arsenal, Hall VIII, Vienna)

Cuirassiers and Reitars appear on the battlefield

The problem, however, was that with all the effectiveness of the lance heavy and light cavalry, the cost of the first was already too high. Only a horse dressed in horse armor could survive without harm, but they were very heavy - 30-50 kg and roads, plus the rider's armor - also 30 kg and its own weight, plus a sword (and often not one) and a spear. As a result, the horse had to carry a large load, so the plate cavalry required tall, strong and very expensive horses. Moreover, as soon as a horse was incapacitated, the price of its rider on the battlefield dropped to zero at once. In addition, again, remember that the armor was now worn by the infantry, and the armor of the riders became extremely durable. The chronicler Francois de La Well, nicknamed "Iron Hand" and the captain in the army of the French Huguenots (1531 - 1591), for example, wrote in the year 1590: "A gun can penetrate defensive weapons, but a spear cannot. It’s a miracle if someone is killed with a spear. ”

Two spanish wick muskets. C. 1545 of the year. The stock and forend of the lower one with the “Spanish butt” are covered in black velvet and studded with nails with gilded hats
Therefore, any reduction in the cost of horseman weapons by the sovereigns was only welcomed. “Take away his spear and a good horse from the spearman, and then it will be a cuirassier,” wrote one Wallhausen in 1618. However, the cuirassiers' armor also underwent, so to speak, “secularization”. Legplates - sabatons and greaves, difficult to manufacture and fit on the leg, were removed, and the leggings were made only on the front of the thighs and in the form of plates falling on each other. To fit them in size was much easier, which was also helped by the fashion for chubby, padded with cotton, pants. Legplates were replaced by taut leather cavalry boots. Also not cheap, but compared to plate footwear, which gave considerable savings. And armor plates were always easier to do than legs. In addition, they now began to be replaced with chain mail, while cuirasses began to be produced using stamping. The armor stopped polishing, and began to cover with a thick layer of black paint. Reutars, natives of Germany, also used similar armor, which is why they received the nickname of “black devils” and “black gangs,” and for their weapons both reitars and cuirassiers were also called guns, “pistols,” since they , and for others it was the pistol that became now the main weapon, a spear substitute. On the other hand, the same La Nou wrote about the other, namely, that to protect against bullets from arquebusiers and musketeers, as well as brutal kicks, many began to make the armor more durable and resistant than before. Additional plate armor plates have come into fashion, that is, riders, like modern Tanksstarted using multilayer exploded armor!

PS The author and site administration express their heartfelt gratitude to the curators of the Vienna Armory Ilse Jung and Florian Kugler for the opportunity to use her photographs.