Cuirassiers in battles and campaigns 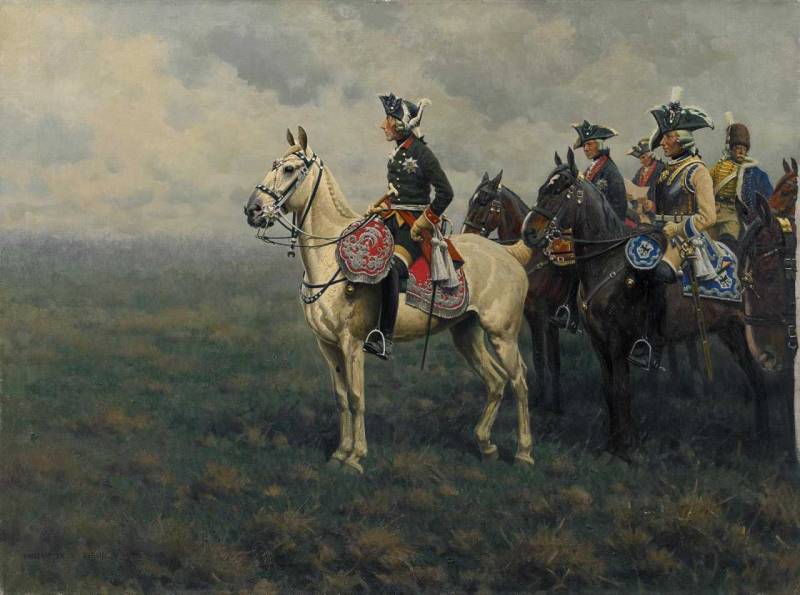 Prussian King Frederick the Great at the Battle of Leuthen on December 5, 1757. Picture by Hugo Ungevitter

Gathering after them weapon and removing the armor from the enemies ...
Second Book of Maccabees 8: 27

Military affairs at the turn of the eras. The XNUMXth century began; new cuirassiers appeared on the battlefields. Who, then, first of all, all began to equal, with whom to take an example? But from whom: from the Swedes!

After the end of the Thirty Years War, in which the Swedish army, led by King Gustav Adolf and the commanders of Baner, Hurn and Tosterson won a series of victories over the imperial armies, the role of Sweden in continental affairs was limited to the Baltic states. Warfare gradually faded away, but in 1675, Charles XI ascended the throne of Sweden and began a series of significant military reforms.

At the end of the 2,5th century, 5 million people lived in Sweden, of which only XNUMX percent lived in cities. Its most important competitor, Russia, had ten times more people, and therefore much more resources to recruit an army. The constant presence of a large number of people under arms would destroy the Swedish economy, so the king introduced the administrative organization Indelningsverkt, under which soldiers and officers of the regular army had the right to work on the royal land on which they were allocated farms. There were typical farm construction projects, depending on the rank of the owner. People from one county belonged to the same detachment, therefore they knew each other well, and therefore their morale was higher than that of mercenaries. Although, if the unit suffered serious losses, the district could be devastated. He then simply would not have enough labor!

The shock force of the Swedish army was the horse regiments, although there were few of them. The main organization of the regiment was four squadrons of 125 people each. In peacetime, soldiers cultivated the land and took part in exercises. In wartime, all the forces of the regiment converged at the gathering point and went to the main army camp, where they were already undergoing continuous training.

During the time of Charles XI, a uniform was introduced in the Swedish army on the model of the French era of Louis XIV. The cavalry was divided into national horse and dragoon regiments, with one squadron of Trabant-Garde (Royal Guard) and a corps of nobles (adelsfanan). In 1685, a royal decree determined a special test for the blades of cavalry broadswords: they had to bend in both directions and withstand a strong blow to a pine board. The blade was branded only if it passed the test. Cuirasses were worn only by royal trabants. The cheapness of the army was one of the principles of the policy of Charles XII.

In 1697, Charles XII became king of Sweden. He continued military reforms and turned the cavalry into a powerful fighting force, which proved itself in many battles against the Danes, Saxons, Poles and Russians during the Great Northern War (1700-1721). How dangerous were these battles, illustrates the example of the Royal Guard; Of the 147 soldiers who went to war in 1700, only 17 returned in 1716. 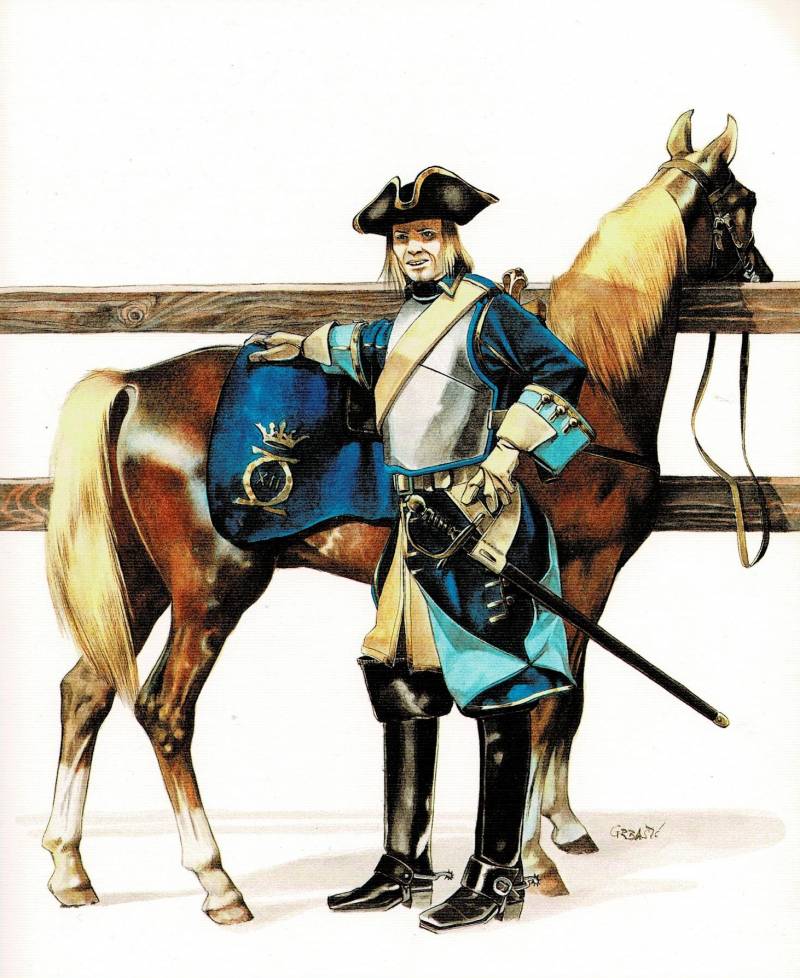 Swedish cuirassier-trabant 1709 Fig. from the book: V.Vuksic, Z. Grbasic. Cavalry. The history of fighting elite 650BC - AD1914. L .: Cassell, 1994. P.155
It should be noted that the creation of the first national mass armies was a serious test for the economies of Europe. Yes, before that, they had to pay mercenaries, but their “men” were at hand and paid taxes. Now they had to tear people away from fields and farms, take artisans into the army, and feed all this mass, water and uniform in fashion. Moreover, no one even thought about how to really simplify the uniform. The great reformer Peter I did not even bother to think about the fact that the meaning of the regular army was not in poses and triangular hats, but in tactics, and ... he immediately dressed his whole army in a Western manner, although he had beautifully dressed archers before his eyes! So I would take away their reeds and train them in a new way, and leave the old clothes: for winter, spring and autumn - a long caftan overcoat and high, goatskin, boots, and a three-piece hat and a hemispherical helmet with small brim on his head, and for summer - a short caftan and a hat with a lapel around the edge. And that’s all! And there would be huge savings for him, and for the enemies ... it would be purely subconscious to see so many people dressed in completely different ways. And the soldiers had to leave beards - they would look worse! But he was a man of traditional thinking and could not think of such a thing.

True, attempts to reduce the cost of the already expensive cuirassier uniform were made. But they didn’t really succeed. Here's what, for example, a traditional European cuirassier of 1710 looked like. Kaftan made of elk leather under a cuirass, which could be double or single, that is, only on the chest. On the head is a traditional cocked hat, but with a metal “lining”. She is also wearing a traditional tie - croat. Tall leather over the knee boots. Armament: a straight long broadsword, two pistols in holsters at the saddle and a carbine. The cuirass could be polished or painted black. 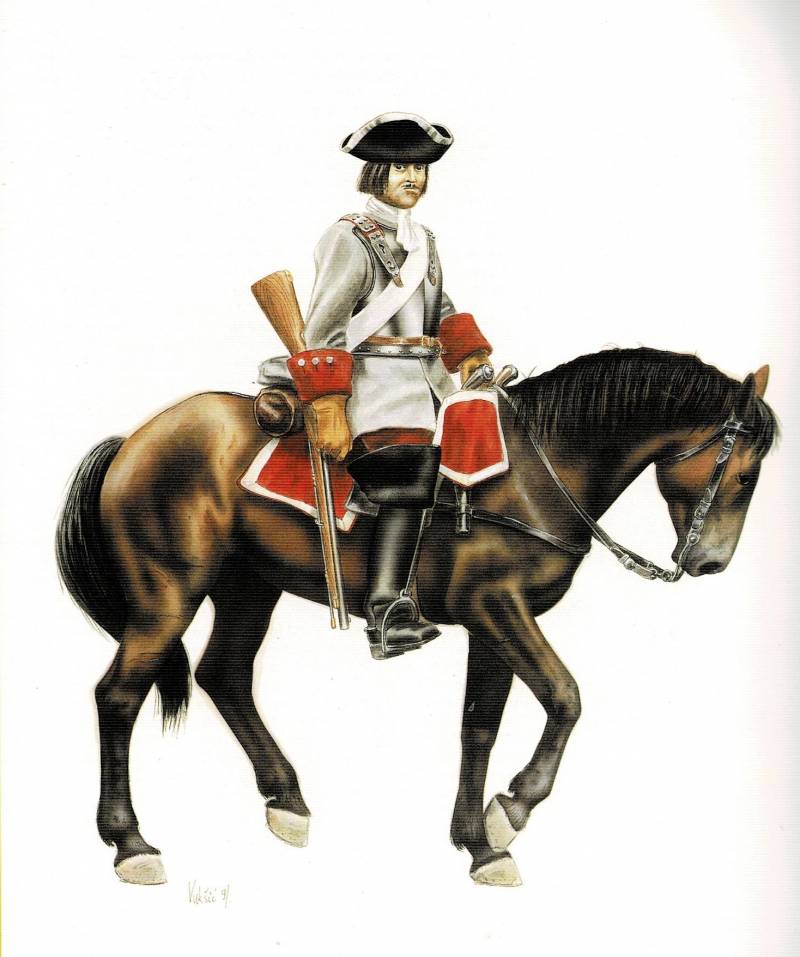 European cuirassier 1710. Fig. from the book: V.Vuksic, Z. Grbasic. Cavalry. The history of fighting elite 650BC - AD1914. L .: Cassell, 1994. P.161
In France, the medieval cavalry was reorganized in 1665, when all the horse units were converted into 17 regiments of regular cavalry with companies of 250-300 people each. According to an earlier tradition, some of them were called gendarmes, while others were called legionnaires. The first four (including 1st Scottish and 2nd English) belonged to the king; the rest is to the queen and various princes. Each company was commanded by a lieutenant commander, equal in rank to colonel of the army cavalry. Cornet is a lieutenant colonel, a sergeant is a captain, a brigadier is a lieutenant. The four gendarmes divided among themselves one servant who took care of them and transported their equipment on a pack horse.

The gendarmerie was not a guard, but had almost the same status. On the battlefield, it was kept as a cavalry reserve in the amount of 2-3 thousand people, usually together with the guards, and sent to the fire at critical moments of the battle, regardless of losses. The gendarmes participated in all French campaigns, with considerable success, but by the time of the Seven Years' War the French army had only 10 squads of gendarmes. 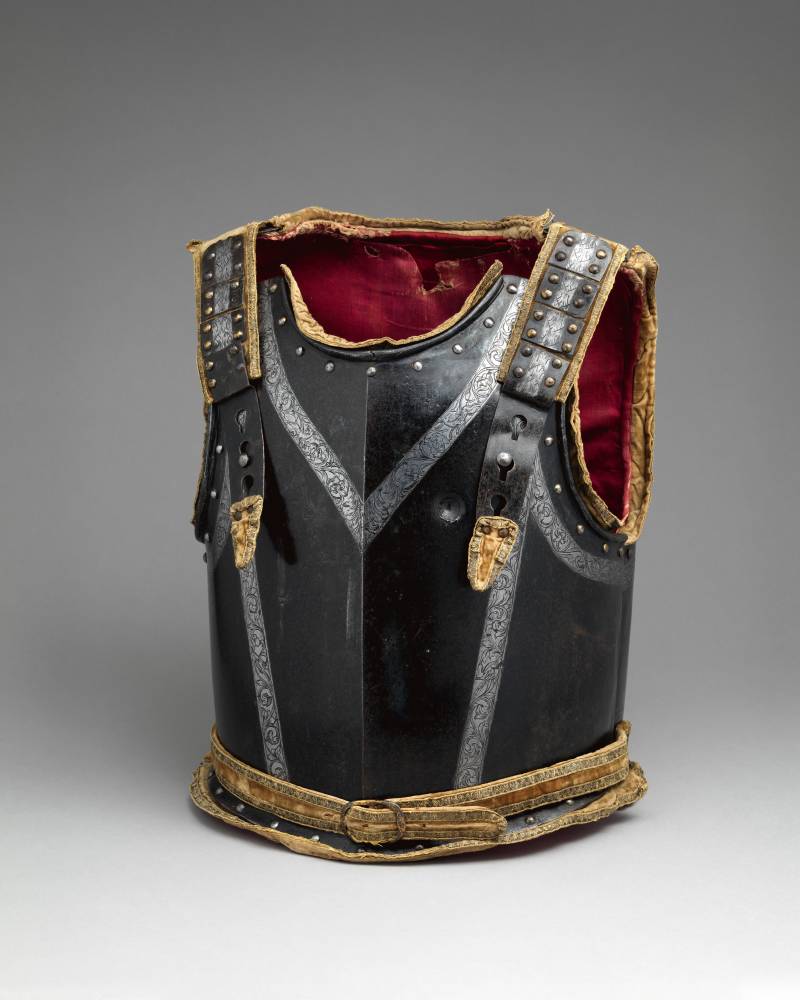 Breastplate, end of the 6577th century Germany. Front view. The weight of the back plate is 6350 g.; chest plate weight XNUMX g. Metropolitan Museum of Art, New York
Like the guards, they were allowed to wear red camisoles, but chest breastplates can be worn under them. Each company had its own insignia embroidered with silver thread on holsters, mats and carabiner belts. They were armed with a rifled carbine, two pistols and a broadsword, and on their heads they wore a steel “cap” (calotte de fer) under a hat. 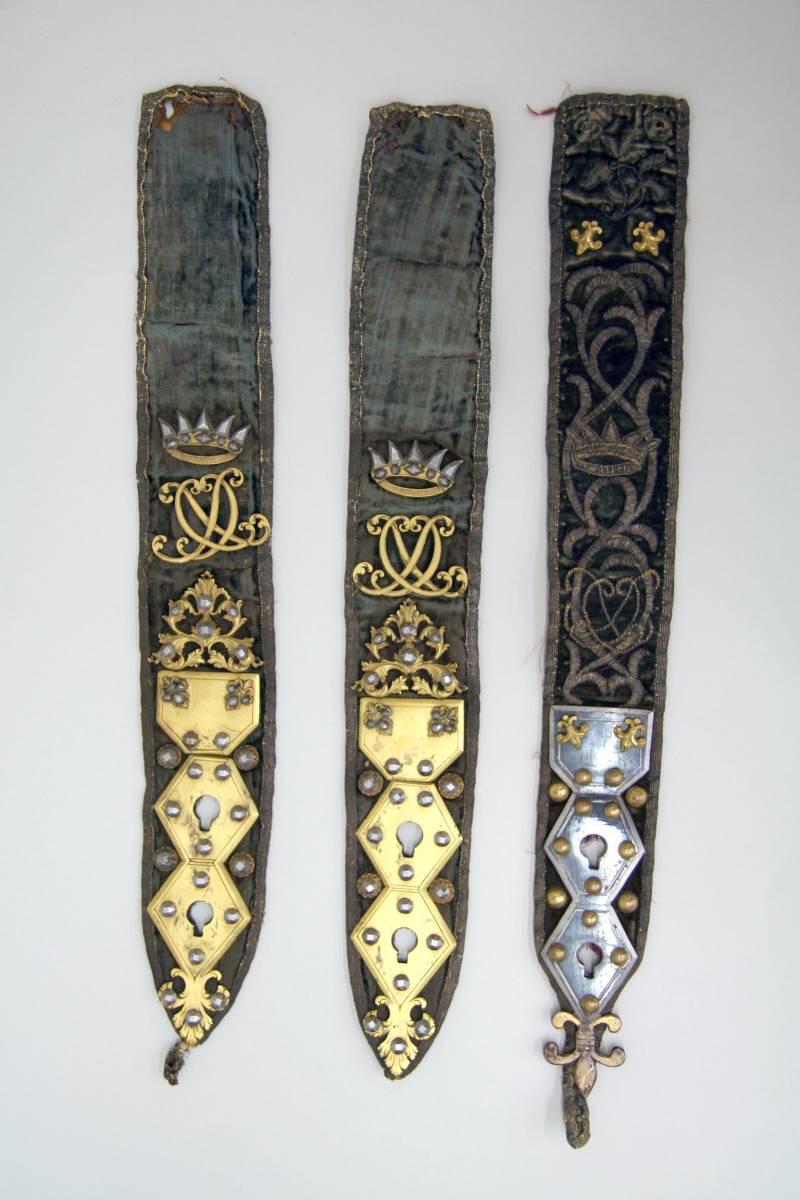 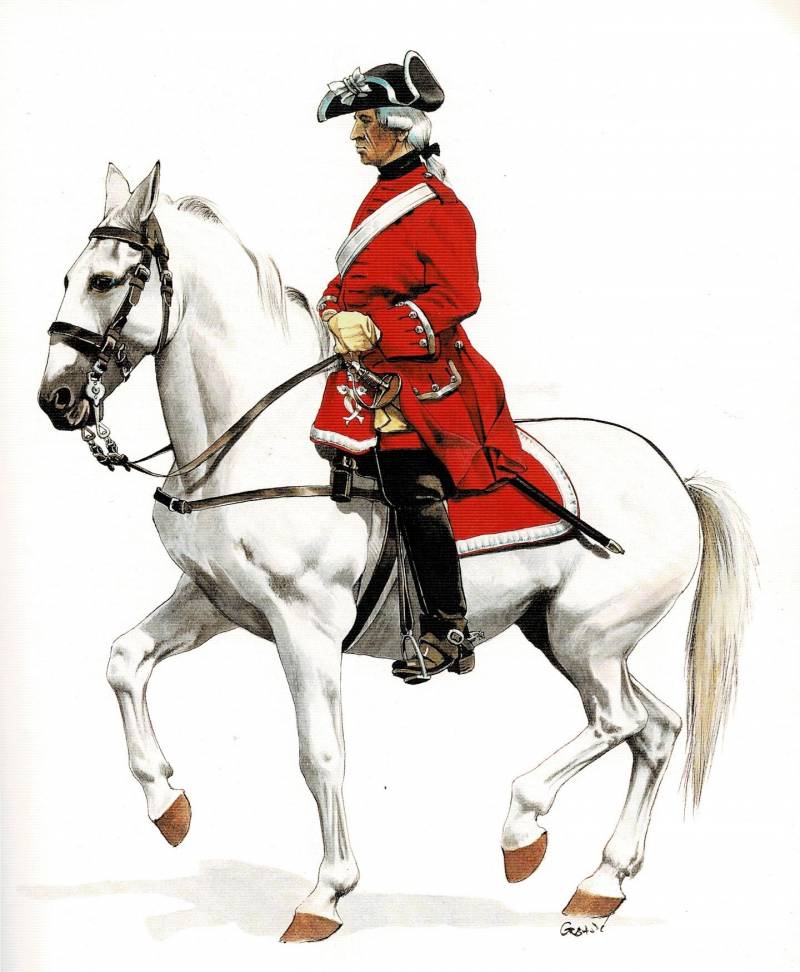 French gendarme 1750 from the book: V.Vuksic, Z. Grbasic. Cavalry. The history of fighting elite 650BC - AD1914. L .: Cassell, 1994. P.165
At the beginning of the War of Austrian Succession, at the Battle of Molvitz in 1741, Frederick learned of his victory only at the very end. The Austrian cavalry defeated their Prussian opponents and almost captured the Prussian king, but his superior infantry turned defeat into victory. As Friedrich later wrote, he had the opportunity to see on the battlefield how bad the cavalry he had inherited from his father. Most of the officers did not know the service, the horsemen were afraid of horses, few were able to ride well, and the exercises were carried out on foot, as in the infantry. Worst of all, the riders on horseback moved very slowly. He decided to reorganize his cavalry and issued numerous rules and instructions, which most of all concerned precisely the cuirassier regiments, which became the best in Europe.

Friedrich decided that recruits for cuirassier regiments must be healthy and strong, at least 160 cm tall, to wear heavy cuirasses. Selected were mainly the sons of peasants who knew how to deal with horses. Height at the withers of 157 cm was declared the minimum acceptable for horses, and the Holstein breed became the most popular horses. Holstein horses have been bred at monasteries in the Elbe Valley since the 1719th century, where local mares crossed with Neapolitan, Spanish and Eastern stallions. The first rules on horse breeding were published in 1735, and in XNUMX the state stud farms in Prussia had already begun to breed Holstein horses for the army. They were very popular and exported to many European countries. They were large, black and dark brown, firmly built and dynamic in movement horses.

Towards the end of that century, the uniforms of Prussian and other European cuirassiers became almost universally white; the color was the only reminder that they once stood out from bleached skin. The cuirassiers were armed with a carbine, two pistols and a broadsword, and the regiments consisted of five squadrons, each of which had about 150 people. 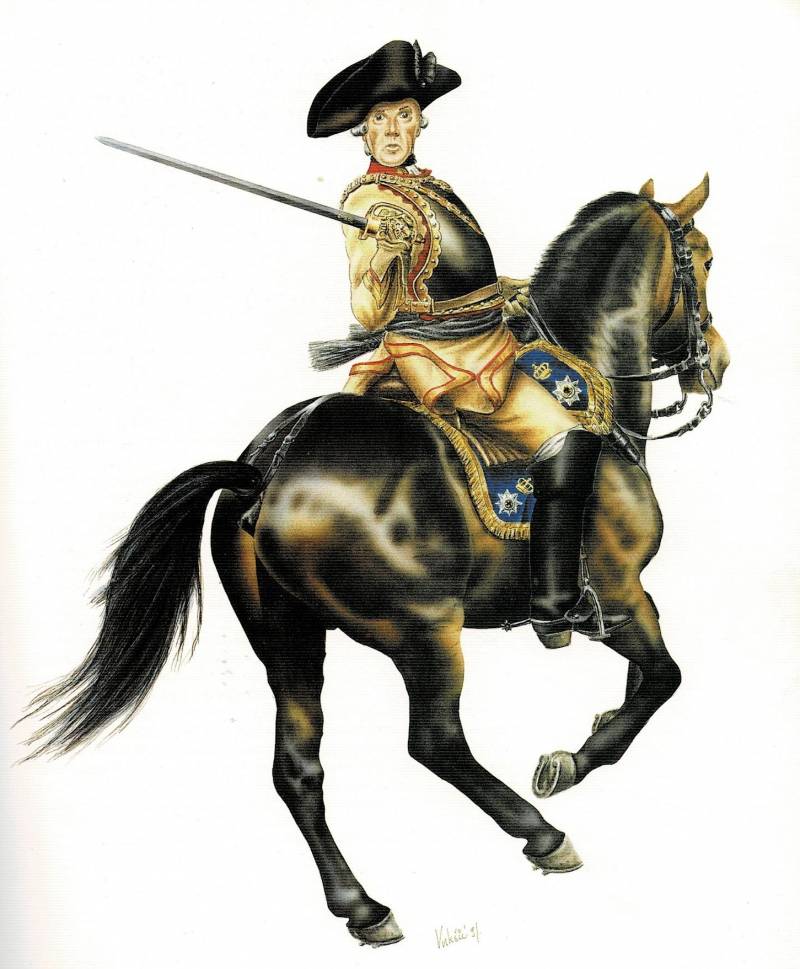 Prussian cuirassier 1756. Fig. from the book: V.Vuksic, Z. Grbasic. Cavalry. The history of fighting elite 650BC - AD1914. L .: Cassell, 1994. P.165
At the Battle of Rossbach in 1757, five cuirassier regiments, a total of 23 squadrons, under the command of Major General Seidlitz twice attacked the French troops and ultimately decided the outcome of the battle in favor of Prussia. 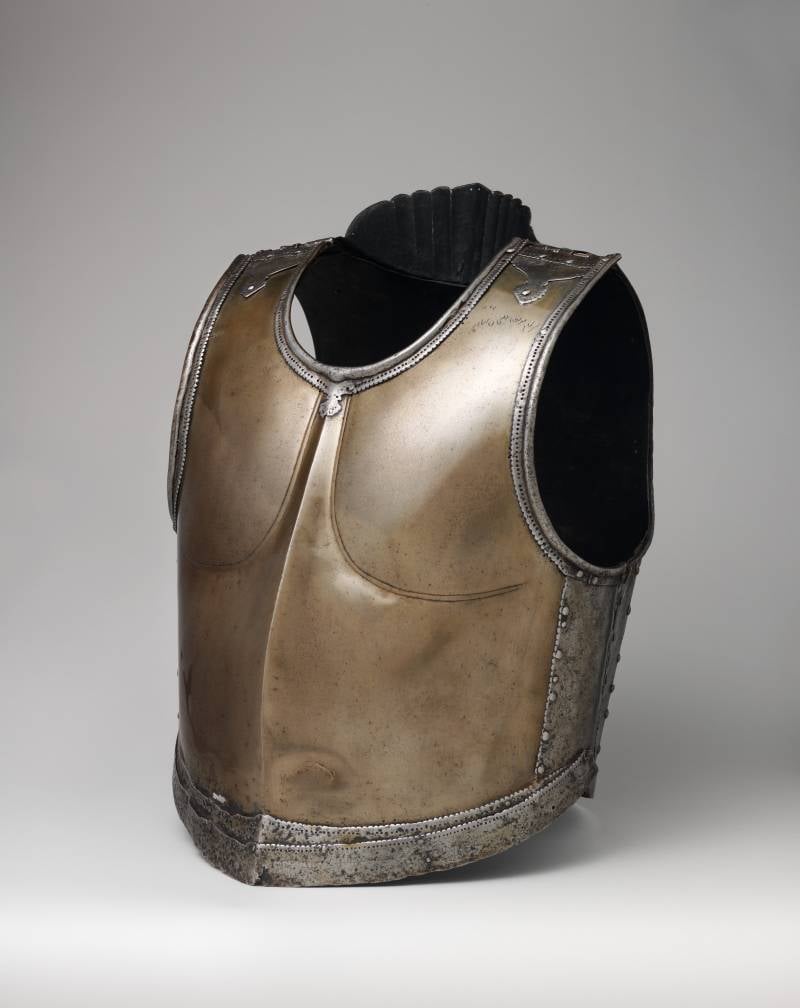 Hyderabad Royal Arsenal Breastplate. 1778-1779 It belonged to Ali Khan (reigned from 1762–1803), who headed the state of Hyderabad during his economic growth, during which he became an important cultural center of India. The unusual one-piece design of the bib and back panel, which resembles a stylized torso of a person, may reflect European influence. Both plates are forged from crucible steel, which is also referred to in the literature as polished steel due to the delicate pattern of ripples visible in the metal structure. Polished steel was often used for sword and dagger blades, but rarely for armor, with only the highest quality. Metropolitan Museum of Art, New York

Author:
Vyacheslav Shpakovsky
Articles from this series:
Horse latniks back in service
Cuirassiers in museums
Friends and Enemies of Imperial Cuirassiers
Polish shells, Austrian hussars and Turkish fives
Enemies of the Cuirassiers
With whom the latniks of the emperor Maximilian fought?
“A small discovery in the butt of an arquebus ...”
Horsemen of the Eighty Years War
Horses and saddles of the XVI-XVII centuries
“By people and by horses, not by aer”
Ordonance companies
“It's a miracle if someone is killed with a spear”
Mounted Latniks Sunset