Cuirassiers and cuirasses of the Napoleonic wars 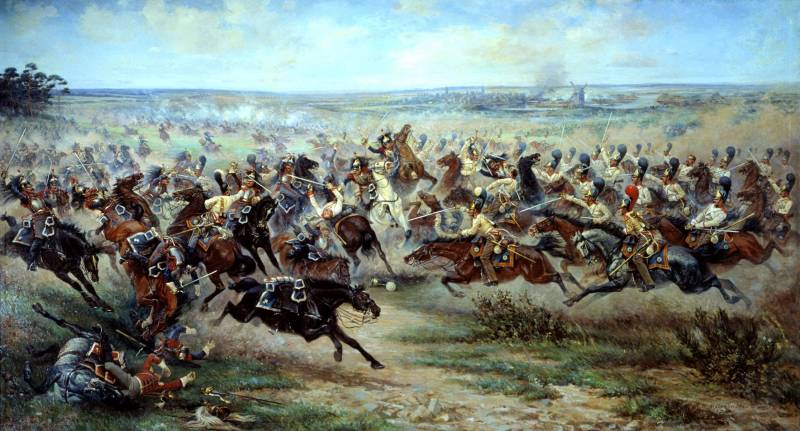 V. Mazurovsky. The attack of the Life Guards Cavalry Regiment on the French cuirassiers in the battle of Friedland on June 2, 1807

Cavalier guards, the century is short,
and therefore it is so sweet.
The trumpet sings, the canopy is opened,
and somewhere saber ringing is heard.
The stringed voice still roars,
but the commander is already in the saddle ...
Do not promise young maiden
eternal love on earth!
Bulat Okudzhava. Cavalier's song

Military affairs at the turn of the eras. By the end of the reign of Paul I, the Russian cavalry had as many as 13 cuirassier regiments in its composition - a solid force. But for the sake of economy, by 1803, their number was reduced to six. These were His Majesty's regiments; Her Majesty; Military Order; Little Russian; Glukhovsky; Yekaterinoslavsky, to which in 1811 they nevertheless decided to add two more: Astrakhan and Novgorod. In 1812, two more regiments, the dragoon regiments of Pskov and Starodubovsky, were converted into cuirassier regiments, and in April 1813 His Majesty's regiment was transferred to the Guard. 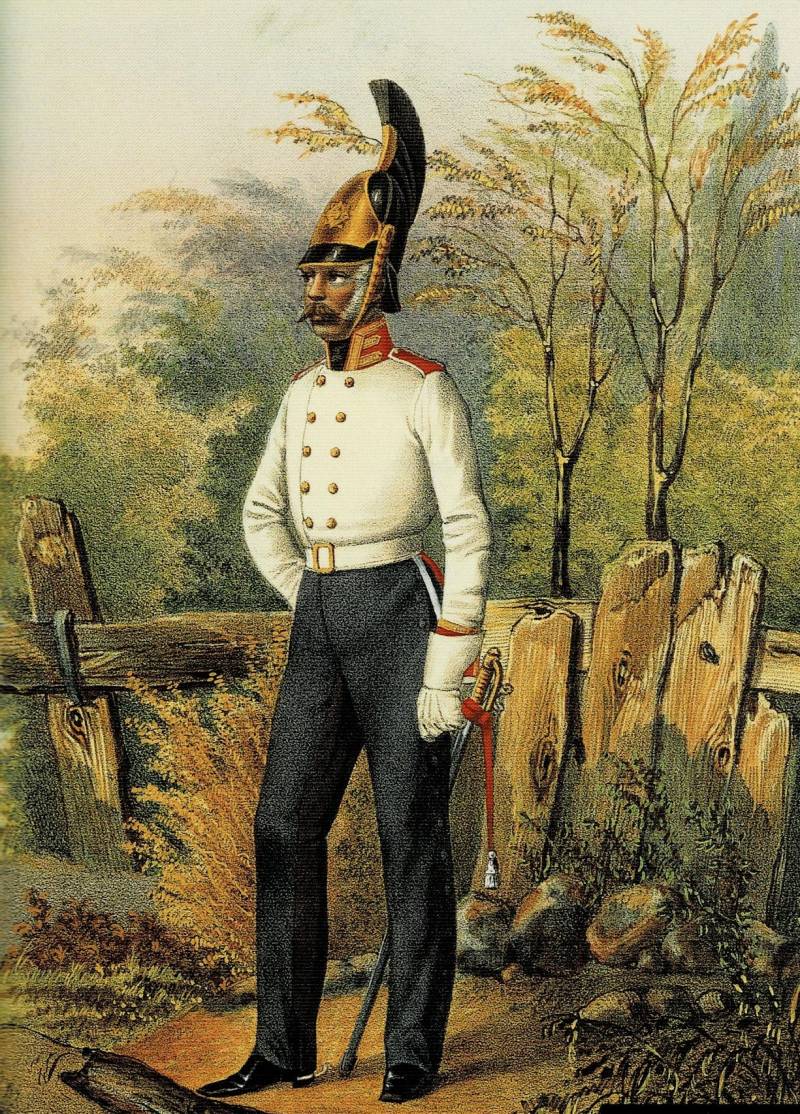 Non-commissioned officer of the Life Guards Cavalry Regiment, 1809-1812 From the book "Drawings to stories Life Guards Cavalry Regiment: uniform of Life Guards Cavalry Regiment, 1731-1848 "
All regiments had a five-squadron composition and included the chief of the regiment, a colonel, a lieutenant colonel, two majors, two captains, seven headquarters captains, ten lieutenants, 17 cadets, five senior non-commissioned officers (vakhmisters), ten warrant officers, five quartermasters, 50 non-commissioned officers, 660 soldiers, 17 musicians, three ministers of the regimental church (a priest and two assistants), ten doctors, five barbers, 32 artisans, profos and 21 Furshtatsky. The reserve squadron of the regiment consisted of a major, a captain, a headquarters captain, a lieutenant, a cadet, a sergeant-major, a quartermaster, ten non-commissioned officers, 102 soldiers, two trumpeters, a barber and four carts. In 1812, first another squadron was added to the cuirassier regiments, and then a second, so there were seven of them. 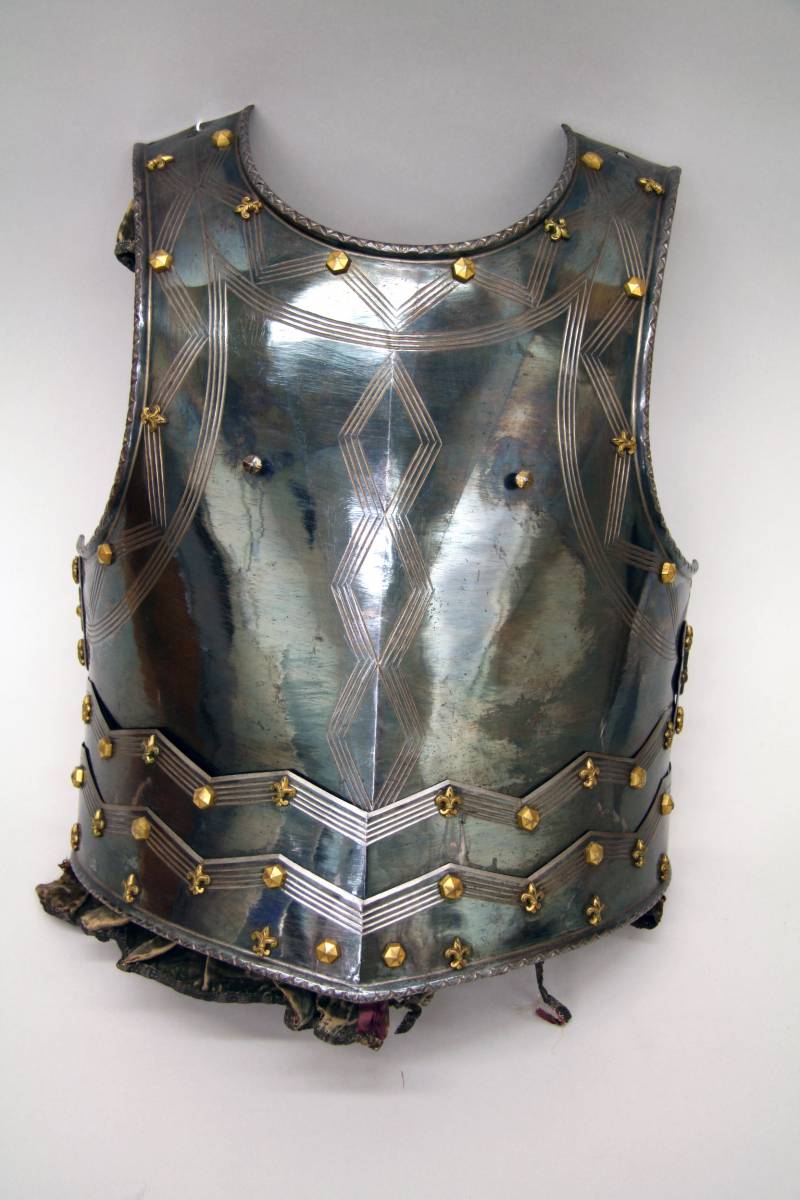 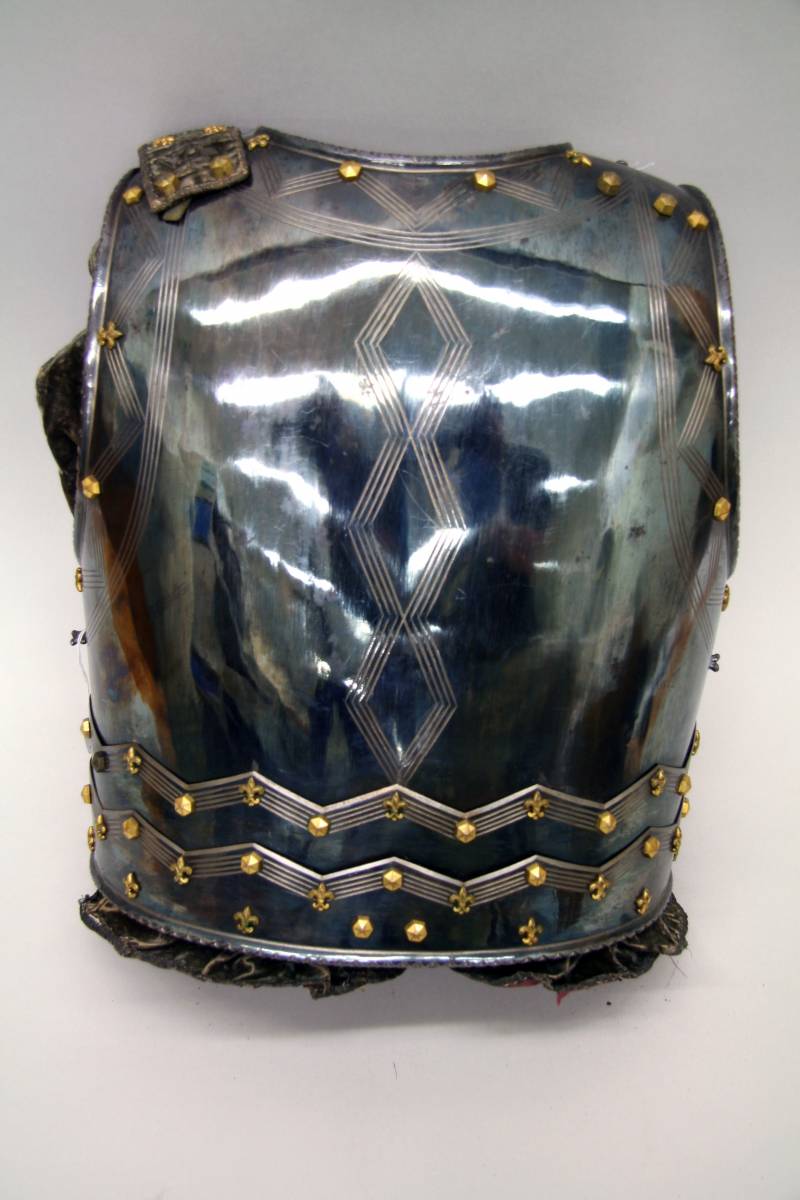 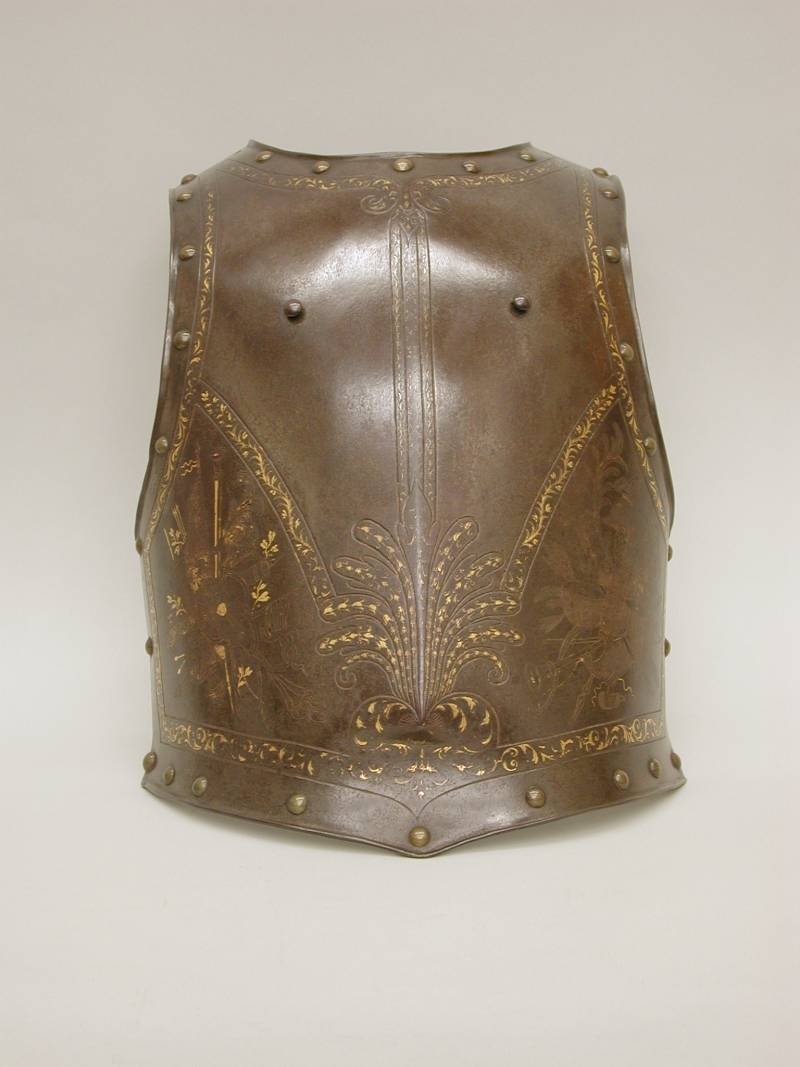 Breastplate of the early XNUMXth century France, Besancon. This cuirass is an extremely rare example of late decorated armor of the highest quality and one of the few documented French examples bearing the N mark (either from the city or from its creator in that city) 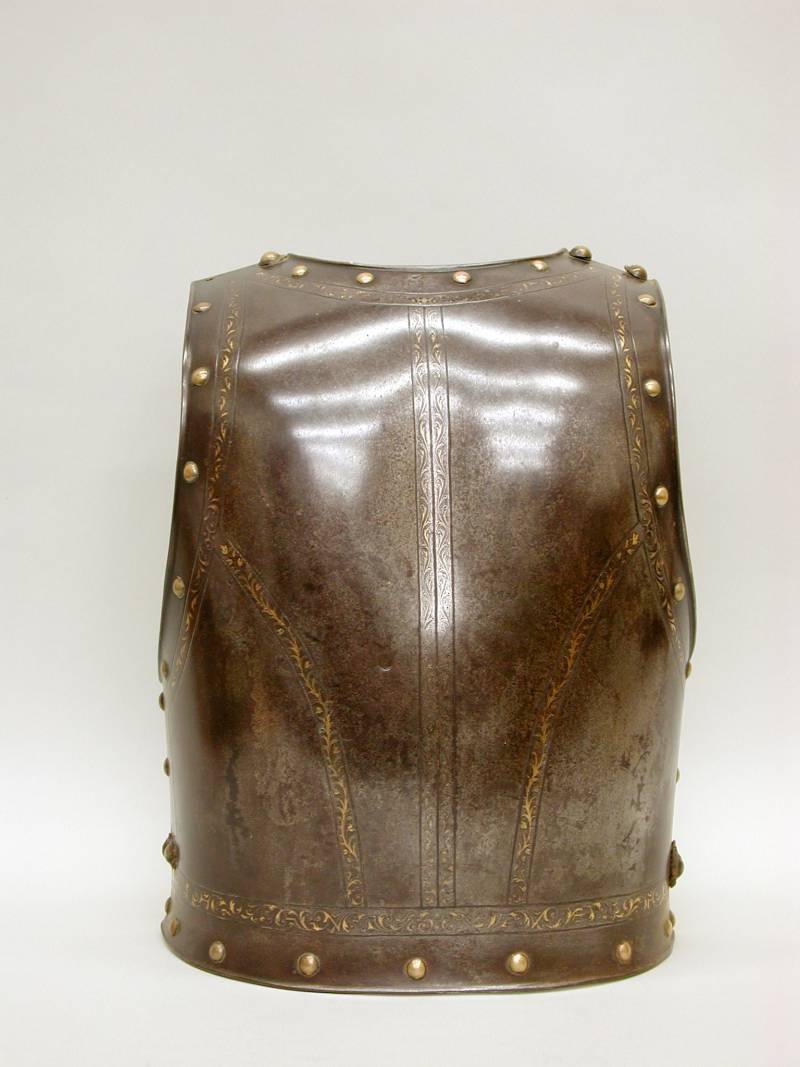 The same cuirass, rear view. By the end of the XNUMXth century, the wearing of armor had fallen out of fashion, although the French cavalry were sometimes supplied with cuirass. This specimen, made for a high-ranking officer, probably a nobleman, was specially decorated and includes baroque trophies and foliage ornament similar to that found on a French firearm weapons late XVII - XVIII centuries. Despite the decoration, the cuirass was functional. A shallow circular indentation in the lower left side of the breastplate indicates that the cuirass was shot in test firing to prove it was good bullet protection
Until 1803, the cuirassiers of the Russian imperial army, as if in the 1803th century, continued to wear high two-cornered hats (like dragoons). But in XNUMX, another uniform reform began, and such cavalrymen as dragoons and cuirassiers were given high helmets made of black pumpkin leather, with high combs and visors in front and behind (and the front had a brass edging), and a metal forehead plate with the image of a two-headed eagle (instead of an eagle, on the helmets of the regiment of the Military Order, there was a St. George's star with four rays). The helmet was held in place by a black leather chin strap. In cold weather, a cloth lining was inserted under it, covering the ears. The crest of the helmet was adorned with a curved black plume that looked like a carrot.

The tunic had short coattails and a high collar and was sewn from dense white fabric - karazei. A black tie rested around his neck. Collar and cuffs - from cloth of applied color; the collar had white piping. There was only one shoulder strap, on the left shoulder.

In the dress uniform, leggings of goat or elk leather with high boots were worn. On the contrary, the hiking uniform relied on short boots, over which they wore leggings of either gray or brownish-gray color, with black leather trimmed inside and with wooden buttons covered with fabric along the seam on the side outside.

This uniform corresponded to European fashion in everything, but not even five years had passed, when in 1808 the plume caterpillar on the helmets was replaced with horsehair "bristles", although the magnificent plumes were left to the officers for parades until 1812. In 1812, the cavalry guards also received black steel cuirasses and new collars: low, fastened with hooks tightly. Both the cuirassiers and the cavalry guards had their fittings and carbines taken away (in the period from 1812 to 1814, only flankers had them), leaving only broadswords and pistols.

Now let's see how effective the then cuirass was. Actually, all of them in those years in all European countries were approximately the same in structure and weight, except that they differed in appearance. For example, in Napoleonic France, where cuirasses were worn not only by cuirassiers themselves, but also by carabinieri, unlike Russian, black, painted ones, there were cuirasses, for the sake of beauty, covered with copper sheet! 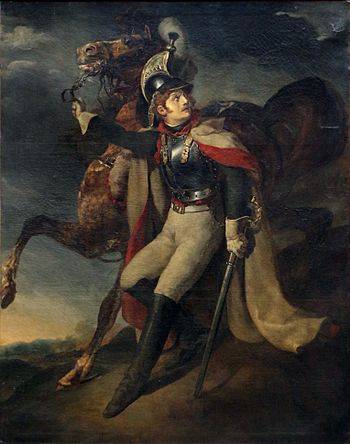 Theodore Gericault. A wounded cuirassier leaving the battlefield, 1814 Louvre, Paris
And there, in 1807, they were tested by shelling. They tested a regular iron breastplate weighing 4,49 kg and a 3,26 kg backrest about three millimeters thick, as well as a German steel cuirass (these were privately allowed to be acquired by gentlemen officers) and an old cuirass from the Seven Years' War, connected by forging layers of steel and iron, whose bib weighed 6,12 kg. The shots were fired from an army infantry rifle of 17,5 mm caliber. And this is what came of it: the first cuirass made its way from distances of 105 and 145 meters, the second did not always break through, but the third, the heaviest, did not break through. The pistol was also fired from a distance of 17 and 23 meters, and the first cuirass was pierced, but the last two passed the test successfully. 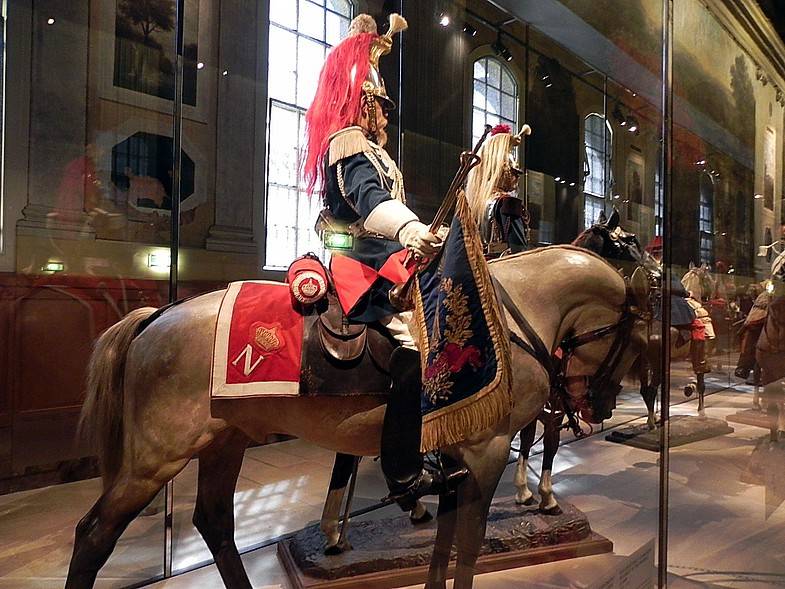 The Paris Army Museum in the House of the Invalids. There are good riders, cuirassiers, dragoons ... But it's very difficult to photograph through glass and against the light from windows ...
By the way, the sapper cuirass made of one bib, which weighed 7,2 kg, at a distance of 23 m withstood all bullets, except for the Tyrolean carbine. That is, the degree of protection that the cuirass gave was quite high. And in principle, it would be possible to make a cuirass and completely impenetrable for the bullets of that time, only now its weight would be at the level of 8 kg! 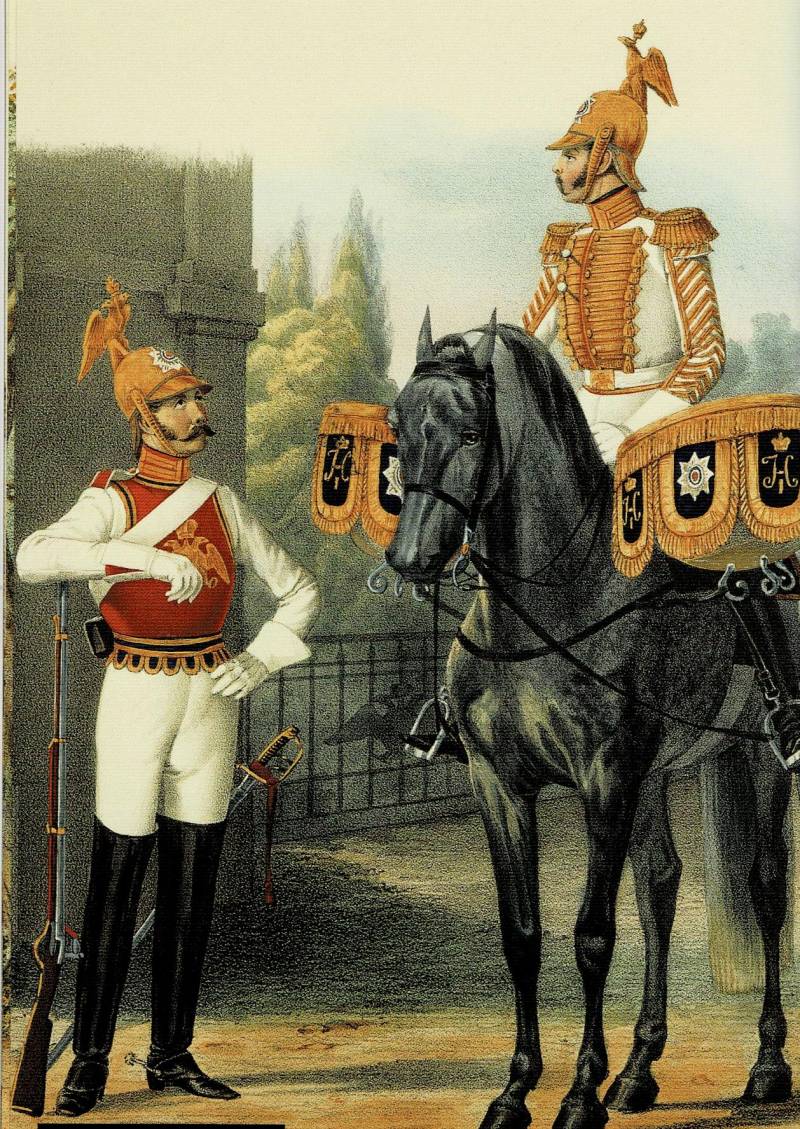 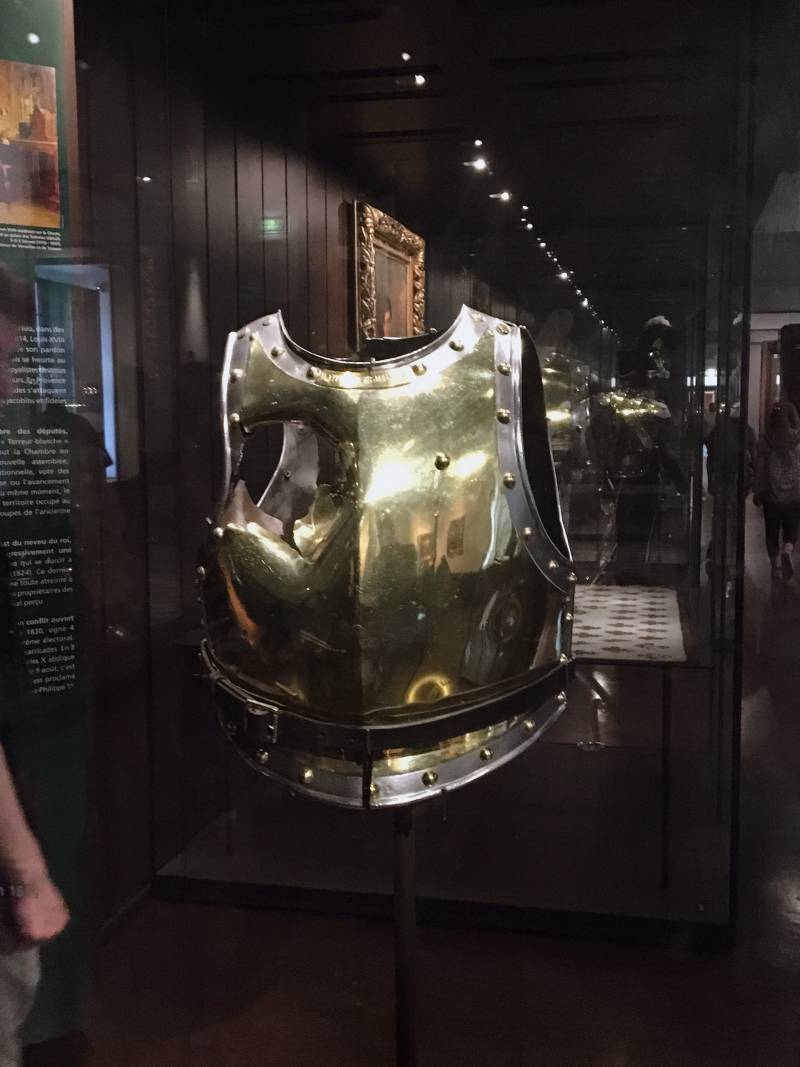 But this is the cuirassier of the French cuirassier of the Napoleonic wars era, pierced by a cannonball. The nucleolus was small, only the size of an orange, and the "hole" was also small, but one can imagine what happened to the poor fellow on whom this cuirass was. And it wasn't over yet! It flew further, into the second rank! 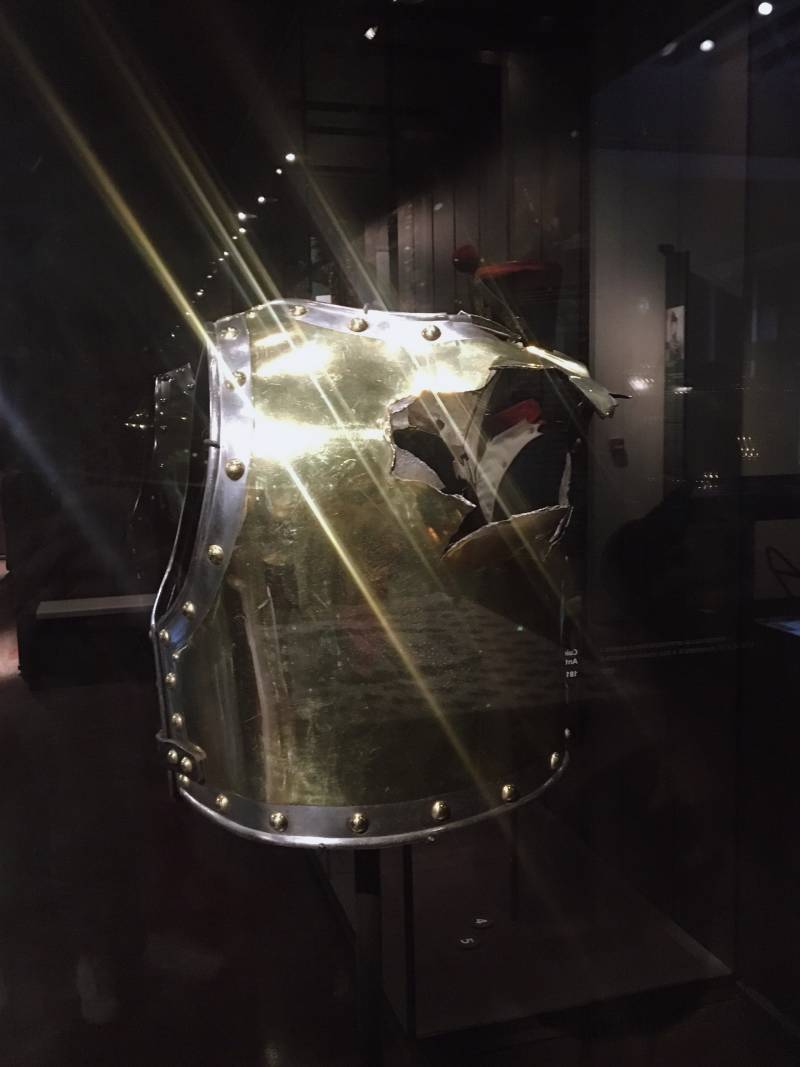 The same cuirass. Back view. Paris Army Museum
In 1855, they decided to lighten the cuirass and began to make the bib already from hardened steel with a thickness of 3,3 mm, and the back - from the usual one. The weight was thus reduced by almost 2 kg. But the problem was that, in addition to progress, there was also progress in the field of small arms in metallurgy, and the Franco-Prussian war showed this once again in the most graphic way. 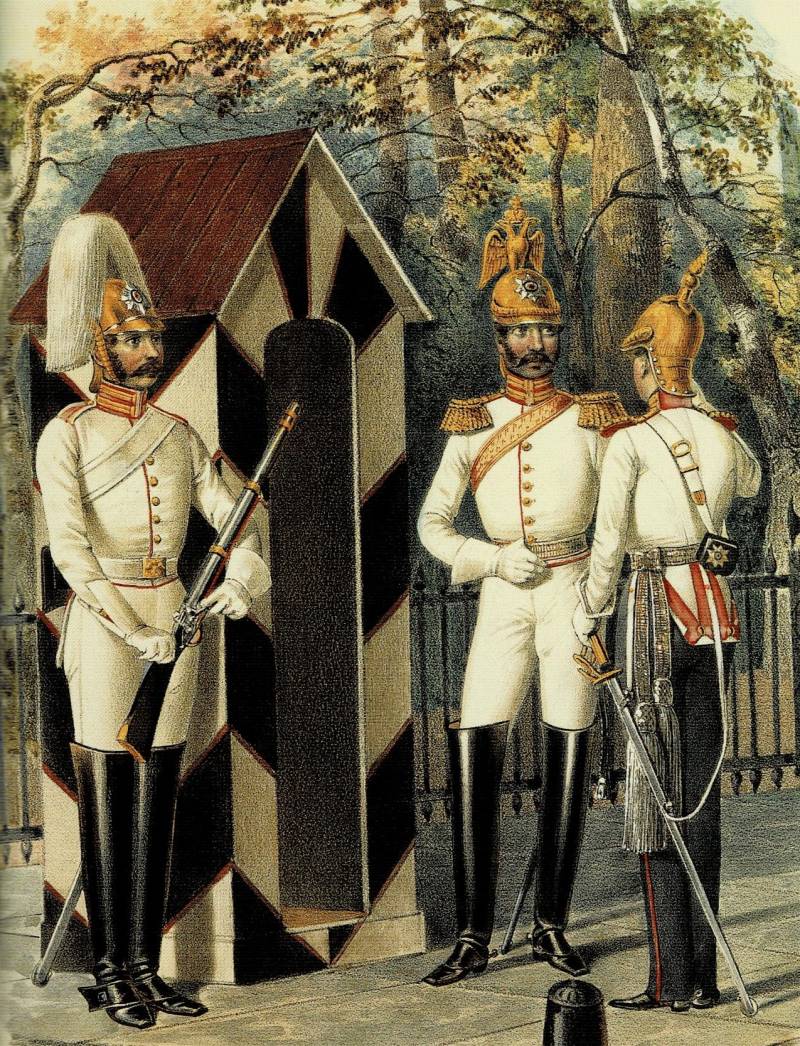 General (center), chief officer (right) and private (left) of the Life Guards Cavalry Regiment of 1848. From the book "Drawings for the history of the Life Guards Cavalry Regiment: the uniform of the Life Guards Cavalry Regiment, 1731-1848"
However, the French army continued to use cuirasses! In the 80s of the XIX century, they began to be made of chrome steel, and now they already protected the rider from the Gra rifle bullets at a distance of 100 meters, and at the same weight. And since 1891, they began to be made of new chromium-nickel steel, which was not penetrated by the bullet of the standard blunt-headed with a lead core and copper-nickel sheath bullet of the French Lebel rifle of 1886 from a distance of 375 meters. But now a bullet of the ogival form of 1898 made of tombac alloy pierced it at all distances ... 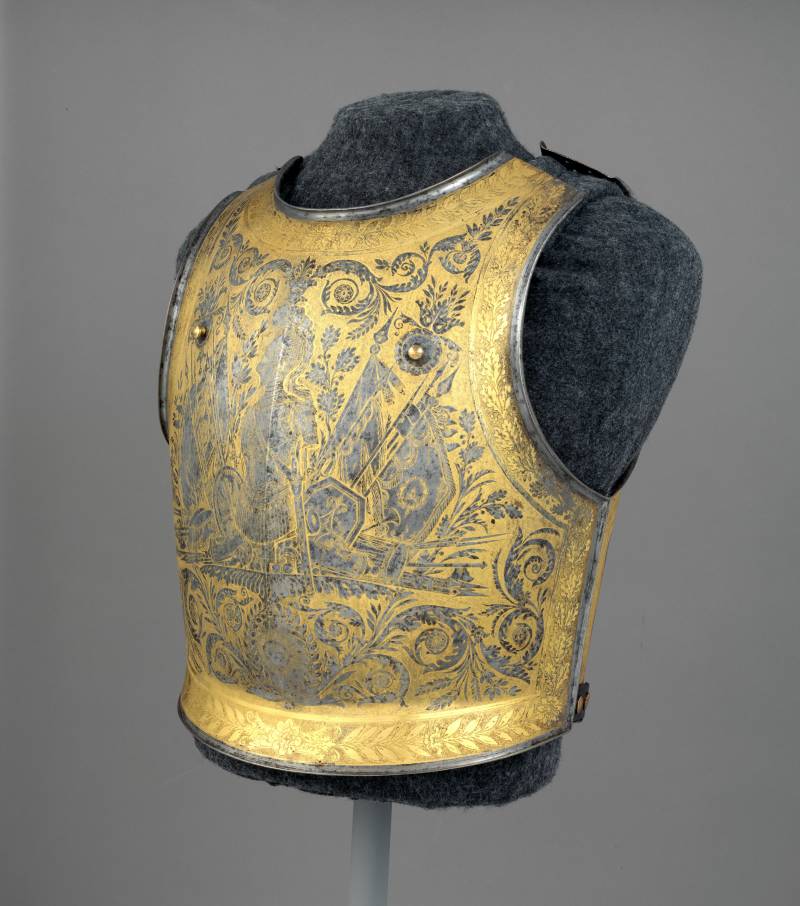 Breastplate, approx. 1825 Produced by Coulaux Frères, Manufacture Royale d'Armes de Klingenthal. It is one of two famous cuirasses with rich engraved and gilded ornamentation from the restoration of the French monarchy, and a very rare example of luxurious armor from the 1784th century. Designed and decorated at the Royal Arms Manufactory in Klingenthal in Alsace, it was probably specially commissioned by François Marie Louis Victor, Baron de Latour-Foissac (1851-1757) in anticipation of the coronation of Charles X of Bourbon (1836-1824, reigned from 1830) to 29) May 1825, 23 in Reims. As Colonel of the Queen's Cuirassier Regiment, Latour-Foissac was the commander of the detachment who accompanied the royal carriage during the solemn procession to the Reims Cathedral. However, due to his age and deteriorating health, Latour-Voissac, an experienced veteran of the French Revolutionary and Napoleonic Wars, received permission to retire from active service on 1825 May XNUMX, just two days before his coronation. Perhaps the cuirass was borrowed by his successor the Comte de Saint-Mar.
In its design, closely related to the standard model of 1825, the cuirass is distinguished by engraved and gilded ornaments made on it from trophies of weapons and foliage. In concept and execution, the decor demonstrates a noticeable similarity with the blades of luxurious sabers made for high-ranking French officers at the Klingenthal manufactory from the Directory (October 26, 1795 - November 9, 1799) and in the era of the Restoration (1814 - July 29, 1830) ...
An accurate comparison with the melee weapons produced in Klingenthal leaves no doubt that the cuirass was engraved and gilded by François-Xavier Biche (1793-1841), who after the resignation of his father François-Joseph Bichat (1756-1831) in 1822 became chief engraver in Klingenthal. The similarity in the design concept of edged weapons decorated by his father in previous decades clearly indicates that he used his father's decorative designs as a source of inspiration.
To be continued ...

Author:
Vyacheslav Shpakovsky
Articles from this series:
Cuirassiers in Russia: how it all began
Cuirassiers in battles and campaigns
Horse latniks back in service
Cuirassiers in museums
Friends and Enemies of Imperial Cuirassiers
Polish shells, Austrian hussars and Turkish fives
Enemies of the Cuirassiers
With whom the latniks of the emperor Maximilian fought?
“A small discovery in the butt of an arquebus ...”
Horsemen of the Eighty Years War
Horses and saddles of the XVI-XVII centuries
“By people and by horses, not by aer”
Ordonance companies
“It's a miracle if someone is killed with a spear”
Mounted Latniks Sunset

Ctrl Enter
Noticed oshЫbku Highlight text and press. Ctrl + Enter
We are
Cuirassiers in Russia: how it all beganVasily Kashirin: Russian troops entered Bessarabia and liquidated the Bujak Tatar horde at the start of the Russian-Turkish war of 1806-1812.
Military Reviewin Yandex News
Military Reviewin Google News
66 comments
Information
Dear reader, to leave comments on the publication, you must to register.