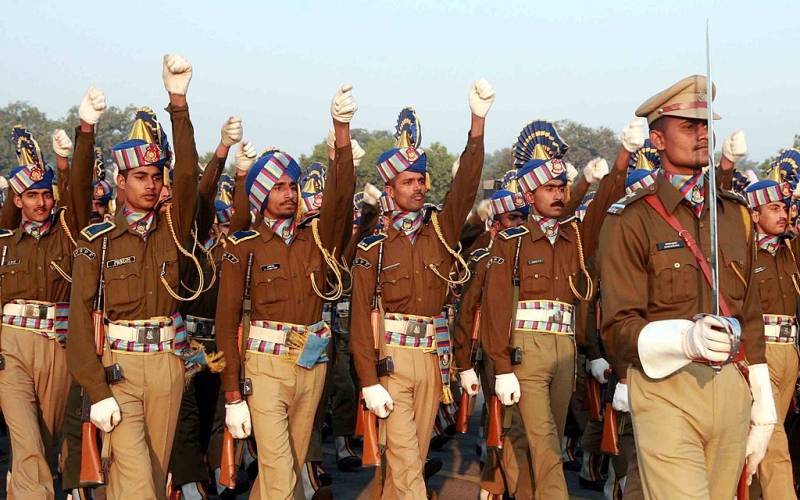 Good, huh? I mean the beauty of the formal uniform! And for some reason, it’s very unusual for us to carry our INSAS assault rifles. Probably more militant ...

I will dress like a picture
I'm in japanese boots
In a big Russian hat,
But with an Indian soul.

I'm in American socks
In tight trousers I'm Spanish
In a big Russian hat,
but with an Indian soul.

Weapon and firms. It is unclear why, but many states want to have their own weapons - instead of buying them from those who get it best. They want to want something ... But whether something worthwhile is obtained from this “desire”, the question is different. Here, for example, India. Since the late 1950s, the Indian army has been armed with a copy of the locally produced English L1A1 self-loading rifle. But in the mid-1980s, Indians needed their own 5,56 mm caliber rifle to replace this outdated specimen. Tests of various prototypes were carried out on the basis of AKM, because what other weapons fight better in the desert and the jungle than our usual Kalashnikov? The samples presented were tested by the Armament Research Institute (ARDE) in Pune. The tests were completed in 1990, in general, successfully, after which the Indian Small Arms System (INSAS) was adopted. In order to send all Lee-Enfield rifles to warehouses as quickly as possible (apparently, this was critically important for the country's defense), in 1990–1992. India acquired another 100.000 pieces of 7,62 × 39 mm AKM assault rifles. Moreover, machine guns were purchased in Russia, in Hungary, Romania and even in Israel.

INSAS in all its glory ... But that's strange. They live in the tropics, in the jungle, where every tree is full. And the “hardware” for the machine was made of plastic
Whatever it was, but in the end, INSAS entered service. Production is carried out at the small arms factory in Kanpur and in the Ishaporsky arsenal. The INSAS assault rifle is today the standard weapon of Indian infantrymen. 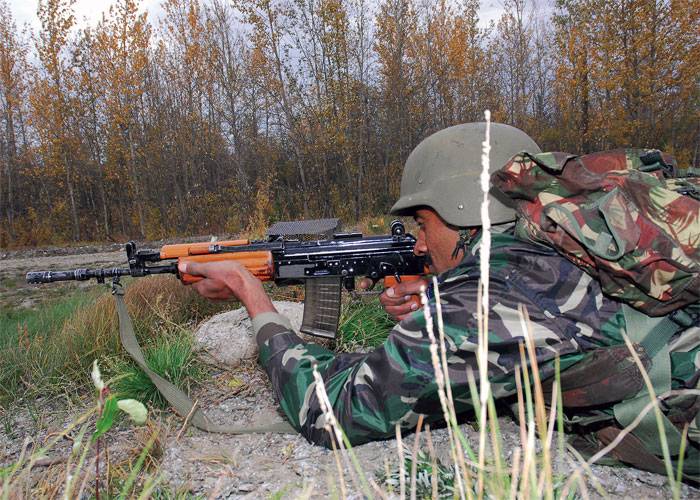 Rifle in battle
Initially, the INSAS system was planned to have three samples: a rifle, a carbine (in fact, our machine gun) and a light machine gun (LMG). In 1997, the rifle and LMG went into mass production, and in 1998 the first INSAS rifles were shown at the Independence Day parade. But then the introduction of the rifle in the army had to be postponed due to the banal lack of ammunition 5,56 × 45 mm, which in large quantities had to be bought again from Israel.

INSAS was a copy of AKM, but ... improved. The barrel has a chrome finish. There are six grooves in the trunk. The long-stroke gas piston and rotary shutter are very similar to the AKM / AK-47 counterparts. But there are differences - these are the very “improvements”. First of all, this is a manual gas regulator, taken from the FN FAL, and the barrel design, which allows you to shoot grenades put on it. The reload handle was placed on the left, like the HK33, and as a switch of fire modes. The machine is equipped with a cutoff of three shots. The rate of fire averages 650 rds / min. Transparent plastic stores were borrowed from Austrian Steyr AUG. There are 20- and 30-charge stores. The sight is located in the breech and is designed for firing at 400 meters. The handle and fore-end can be made of wood or polymer. The fore-end and the grip differ primarily from the AKM in that they are more similar to the same parts from the Galil rifle. Some options got a folding butt. The bayonet is provided. There is a mount for it. 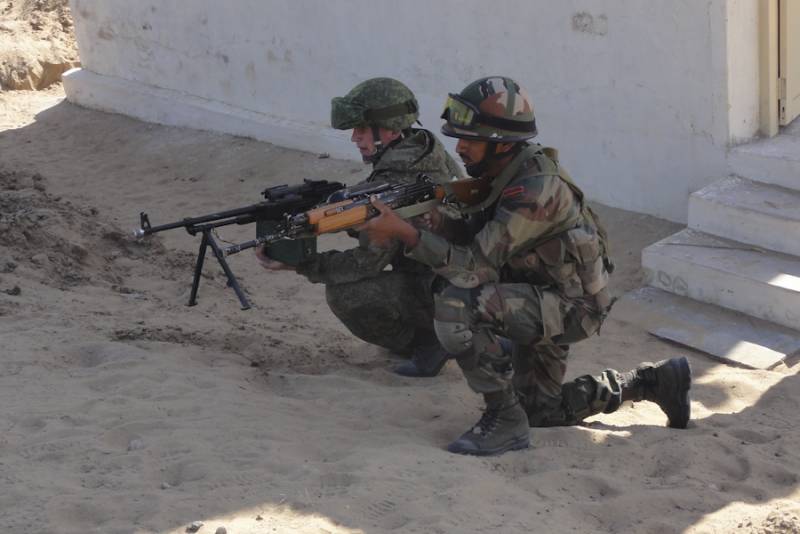 At one time, about the friendship of Russians and Indians in India they said: “Bhai gangs!” - "Children of the same breath." In 2015, the Indians and I held joint exercises of the "brothers in arms." Our left, Indian right
During the 1999 Kargil War in the Himalayas, rifles were used high in the mountains. Complaints of jamming, cracking of stores due to the cold, and automatic switching of the rifle to automatic fire were noted when it was configured to fire a burst of three rounds. When shooting from a greased rifle, oil splashed into the eyes of an arrow. Some shooting injuries were also reported. In 2001, the army received the 1B1 model with increased reliability following the results of this war, but it had other problems, for example, shops began to break down.

The Nepalese army, which also received these Indian assault rifles, faced a similar problem. In August 2005, after 43 soldiers were killed during the fighting in the mountains, a representative of the Nepalese army called this machine substandard. In response, the Indian Embassy issued a statement in which it rejected all claims and explained the problems of the improper use of weapons, after which training was offered to Nepalis on "proper" use.

INSAS with black plastic parts
On August 8, 2011, Pallam Raju, then Minister of State for Defense of India, said in an interview with the Lock Sabha newspaper that all the defects had been fixed. Soon a press release was issued at the Ministry of Defense, in which it reported on the number and characteristics of injuries sustained when firing from INSAS since 2009. The statement also recognized the problem of oil splashes, which was reported in 2003, and stated that the problem was completely resolved. All injuries are due to improper use of the rifle and ... substandard materials from which some instances are made.

But all these encouraging statements ended up being a dummy.

In November 2014, the army proposed removing INSAS from service, as reliability problems were not resolved. In December 2014, an investigation was carried out of the discovered deficiencies already in the parliament committee. It came to a hearing in the Supreme Court. But why rifles with initially low quality were put into service, it was not possible to find out. But in April 2015, the Indian government in some parts of the INSAS rifle was replaced by Kalashnikovs. Then, at the beginning of 2017, it was announced that INSAS rifles should be discontinued and replaced with rifles capable of firing 7,62 × 51-mm NATO ammunition. In March 2019, Indian media reported that INSAS will be replaced with Russian AK-203 assault rifles manufactured in India as part of a joint venture. 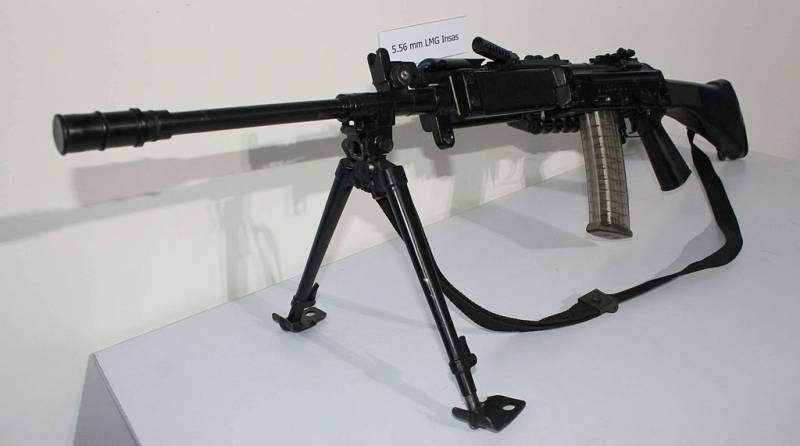 LMG (Light Machine Gun), that is, a light machine gun, which differs from a standard army rifle in that it has a range of 700 m compared to a range of 400 m with standard INSAS rifles. He has a longer and heavier trunk with a modified cut, and equipped with bipods. The LMG version also uses 30-round magazines, but you can also insert short 20-magazine rifle magazines into it. From this machine gun, you can fire both single shots and fully automatically
The Excalibur assault rifle with a range of 400 m, which is lighter and shorter than the INSAS automatic assault rifle, should have become an improved INSAS model. In July 2015, it was reported that INSAS may be replaced by a modified INSAS rifle (MIR), which is nothing but one of the Excalibur rifle options. This decision was made by General Dalbir Singh, who again wanted his own, "national" rifle. It was also reported that another prototype of the Excalibur, AR-2, was being prepared, in which the 7,62 × 39-mm cartridge from the AK-47 would be used.

On the basis of INSAS, a shortened Amog carbine with a firing range of 200 m was developed
The Excalibur prototype has a right-angle gas outlet on the barrel to reduce recoil and a traditional switch for automatic and single firing modes. But it was decided not to use the regime with a cutoff of three shots on it. By September 2015, the sample was tested in water and mud, and the four foreign rifles that participated in this tender did not pass them. It was also reported that 200 rifles were produced, which are due to be officially tested at the end of 2015. And it seems that Indian machines also successfully passed these tests.

But in September 2019, the Ministry of Defense of India announced a new tender for the purchase of 185.000 rifles already caliber 7,62 × 51 mm. But since the tender procedure may again stretch for several years, and the INSAS rifles, as stated, are “hopelessly outdated,” the military department decided to purchase 5,56-mm Mark I Excalibur assault rifles as a “temporary weapon”. And they will be used in the army until the introduction of the new 7,62 mm rifles. From the basic version of INSAS, the Excalibur rifle is distinguished by a reduced weight, a shortened barrel (400 mm) and the presence of Picatinny rail. In fact, it is precisely the shortened automaton that was originally planned in the INSAS system. The new machine guns will primarily be armed with specialized anti-insurgent units of the Indian ground forces. 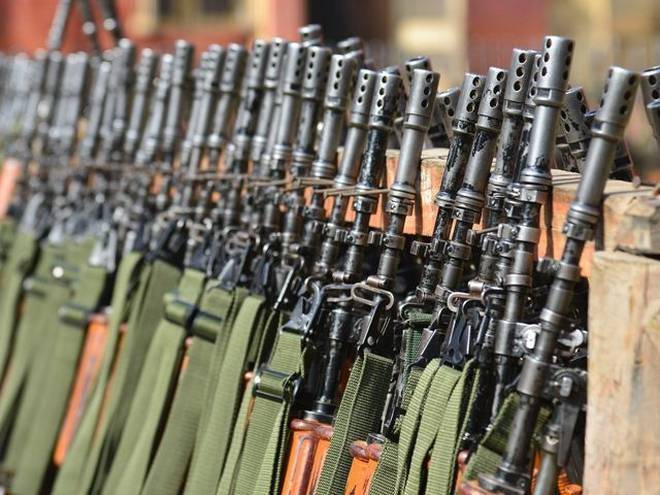 Escaliburs are ready for battle!
All countries have a custom to be proud that their military equipment and weapons are in demand elsewhere. That is, they sell them internationally, so to speak. And India is no exception! She managed to promote her INSAS assault rifles into service with the Royal Army of Bhutan, as well as in Nepal. Since 2001, the Nepalese army has received about 26.000 rifles supplied by India with a subsidy of 70%. They ended up in Oman: in 2010, the Royal Omani Army began using INSAS rifles, sent in accordance with the defense agreement signed between India and Oman in 2003. And they are also used by the African Republic of Swaziland. Involuntarily I recall the saying: tell me who your friend is, and I will tell you who you are.

Well, the "principle of 420", or, in Russian speaking, with a pine forest, as a whole, when applied to the creation of weapons, is not bad and even works very well. It works, but only in those cases when it is used by talented people. Artisans can use it, but their crafts come out "artisan".