October 19 2019
40
Weapon and firms. So, Arthur Savage made a name and capital for himself on a rifle with a rotary store, which the military did not like, but liked the Indians and hunters, and then he was drawn to create a gun. And I must say that he really managed to make a self-loading pistol, which made a significant contribution to history short-barreled firearms. Some even say that he began a new era. That the Browning pistol of the 1900 model of the year was, of course, also an epoch-making thing, but the “savage” (as it was, by the way, was called in France), was nevertheless more significant in this regard. It was fast-firing, accurate and compact at the same time, very convenient for hidden carrying, and had the highest rate of fire among all the compact self-loading pistols that appeared at that time, and there was nothing to say about revolvers. He exceeded them in this indicator four times no less. It was also a beautiful weapon and looked good in the hand of the shooter. Of course, the main thing in a pistol, as in any weapon, is its lethality and other "deadly properties", but at the same time it matters when all this is combined with the completeness of its forms. In the "luxury version" this gun had an excellent engraving, and the cheeks of the handle in this case were made of mother of pearl. Women were asked to pay special attention to this, since “savage” was offered to ladies as a weapon of self-defense when hiddenly worn. By the way, Savage's advertising slogans paid particular attention to the fairer sex: "This weapon gives her courage," He fights for her as a friend, "and even a very short word -" Safety "hit her eyebrow , because among the people there are definitely those who are commonly called “security guards” today and they certainly couldn’t get past the weapons, which seemed to be specially created specifically for them. 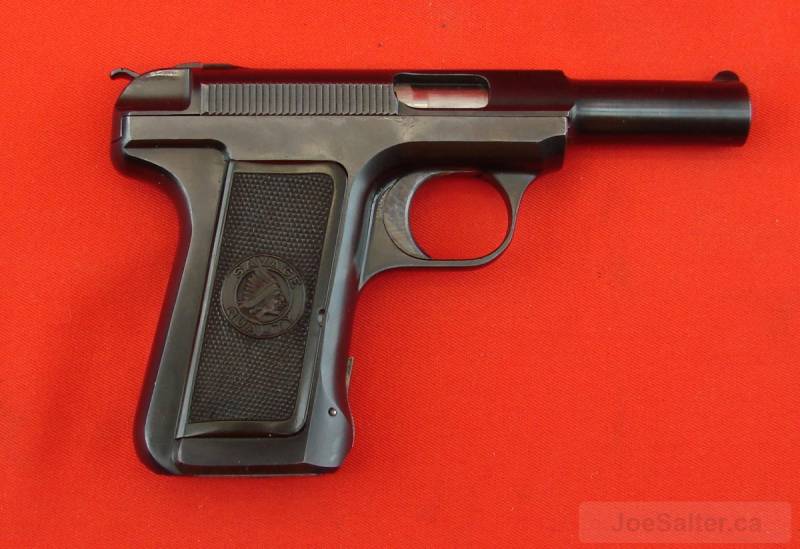 Yes, Arthur Savage, having created a rifle with a unique rotating rotary magazine and a cartridge counter that visually showed their number, showed everyone a very high creative potential. And if his Model 99 became a model of advanced weapons culture at the turn of the century, then the gun he made became the real weapon of the twentieth century. Although, it was precisely him that Savage himself did not personally create. He simply bought the patents obtained by Albert Hamilton Searn in the 1905 year, and embodied his ideas in metal. However, it was first necessary to understand Searle's design and evaluate it, not to mention getting the new gun to work, and to work flawlessly. To begin with, this design was distinguished by an original and very unusual system for slowing down the backward shutter-casing that occurred after the shot. At that moment when the bullet began to move along the barrel and crashed into its rifling, the barrel, trying to turn in the direction opposite to the rotation of the bullet, was pressed with a special protrusion to the edge of the longitudinal and somewhat curved cut on the shutter cover, which slowed down its rollback. As soon as the bullet left the barrel, this protrusion no longer pressed on the cutout in the shutter-casing, and he freely retreated to its extreme rear position. 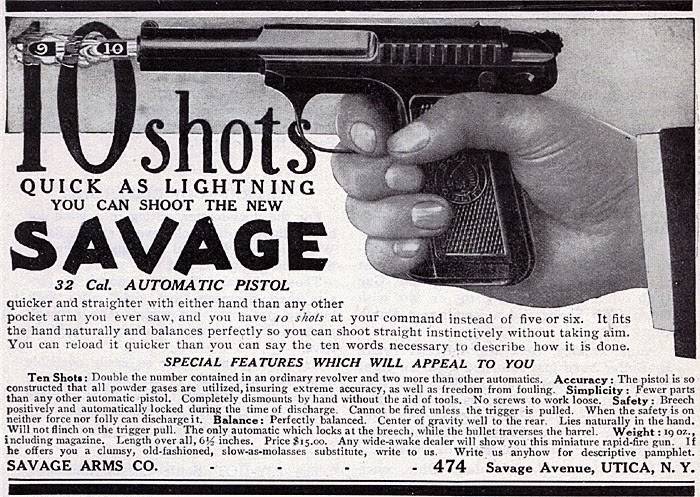 “Ten quick shots like lightning: you can shoot like this from the new Savage.” Savage M1907 pistol ad in the USA

Searle did not begin to create his pistol himself, but simply sold all the rights to it to Savage Arms Co. Therefore, when he finally came into the world, he was called Savage 1907. It was immediately mass-produced, and already in 1908, he appeared on the American arms market. Moreover, he had many original features. 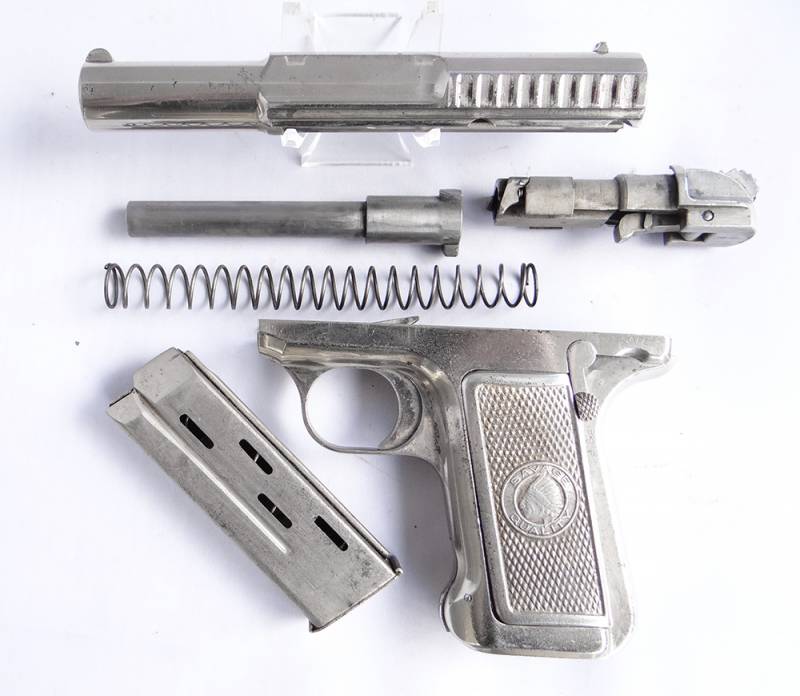 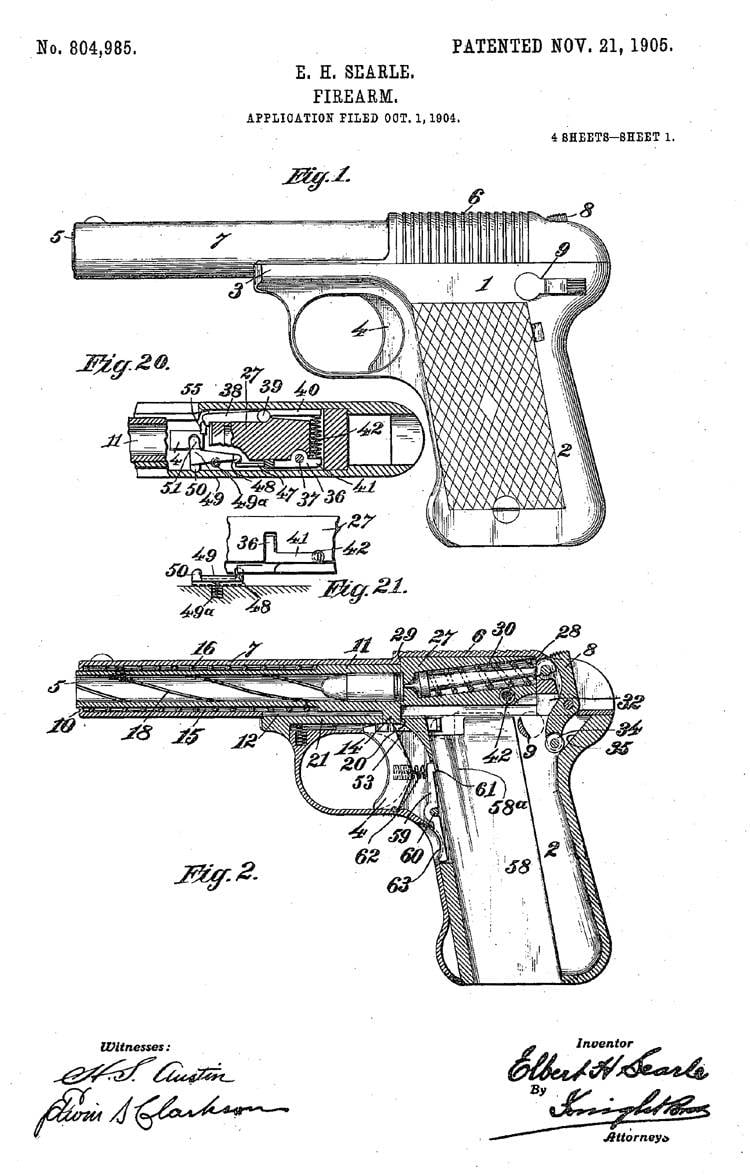 The main feature of the pistol was the placement of a return spring around the barrel, which significantly reduced the dimensions of its front end. John Browning subsequently used this circuit in his Browning 1910 pistol. The trigger of the gun had the following feature: the trigger did not hit the drummer, but was connected to it by a rod fixed on it on the axis. That is, he simply moved them back and forth. The shutter consisted of two parts: front and back, which was also somewhat unusual. As protection against accidental shots, a safety lock is used located on the left of the frame. The trigger pull on the hook for the self-defense pistol can be considered optimal. At a distance of 9 meters when using Remington cartridges with shell bullets weighing 4,6 g., The range of hits is approximately 50 mm, which is an excellent indicator for a short-barrel pistol with a barrel length of only 89 mm. The total length of the pistol, by the way, is also small - only 165 mm, that is, at the time of its appearance it was the most compact and powerful pistol among its kind. Small was the mass of the pistol without cartridges - 539 g. 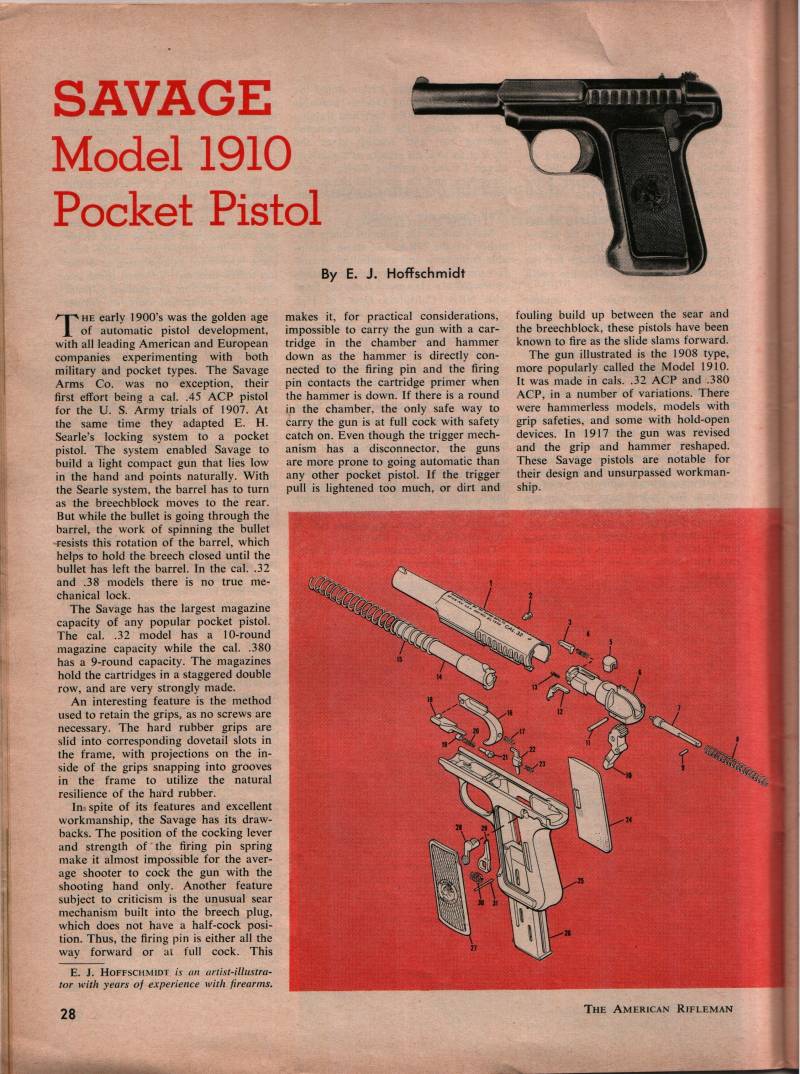 The next and very important feature of the pistol was its box magazine, which had a two-row arrangement of cartridges. This design of the store in a serial gun of the time was used for the first time. The pistol magazine housed 10 rounds. In addition, another cartridge could be inserted into the chamber manually. Meanwhile, most of the then pistols had a magazine capacity of only 7-8 rounds. So, having appeared on the market, Savage 1907 raised the bar for the quality level of such pistols so high that then for a long time not one of the manufacturers risked to mass-produce a self-loading pistol similar to the 1907 model. Of course, the Mauser C-96, also had a two-row magazine, but it was located in front of the trigger guard, which was significantly reflected in the length and its total weight. Users noted that the Savage sat perfectly in the hand, that is, holding it while firing did not cause the shooter any difficulty. The weight of a pistol with an equipped magazine was 656 g, that is, it was also small, as was the empty weight. In 1913, production of the pistol was launched under the cartridge .380 ACP, with a total length of 180 mm. But models with a 9 mm cartridge were just as popular as pistols with a 7,65 mm Browning cartridge. So until 1920, only 9800 of them were made. 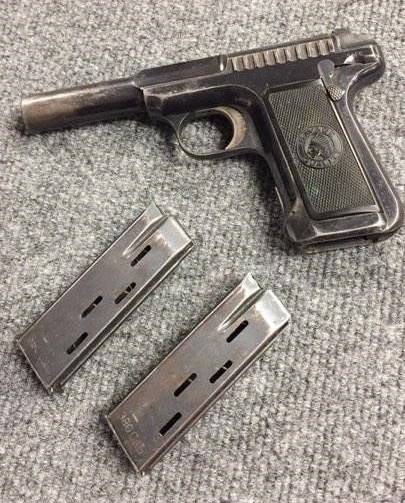 Savage and to it are two stores, on which slots are visible, allowing you to monitor their filling 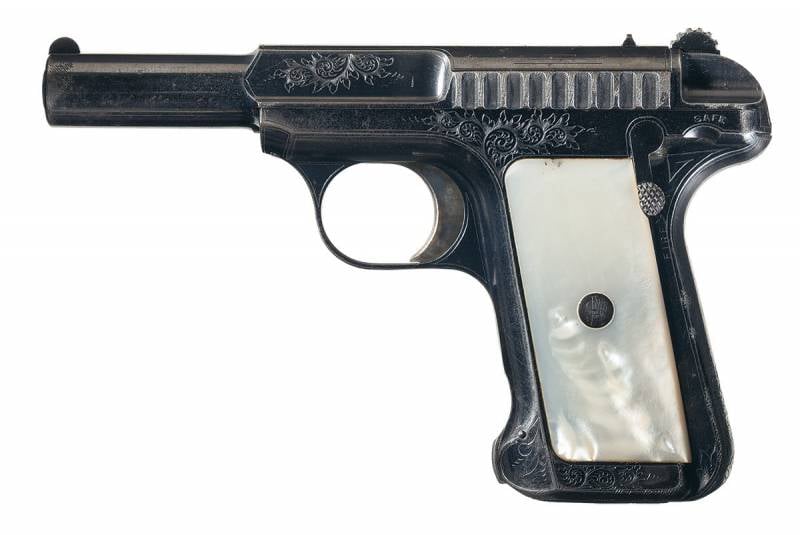 Savage with mother-of-pearl cheeks on the handle 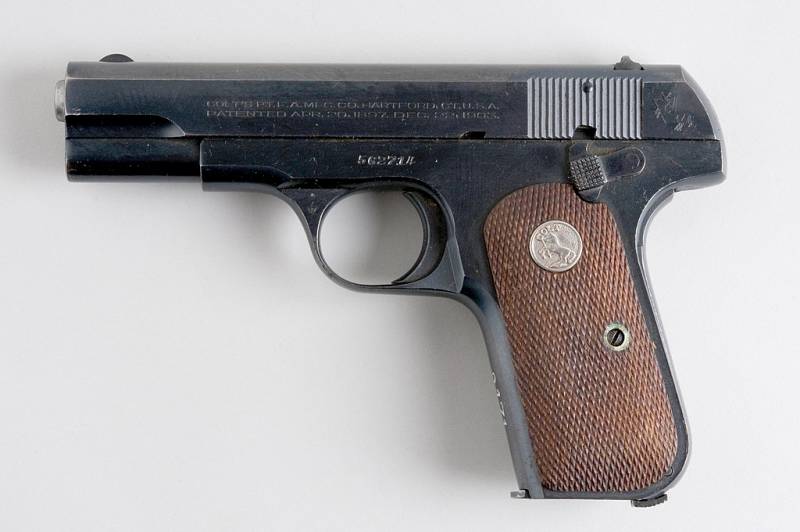 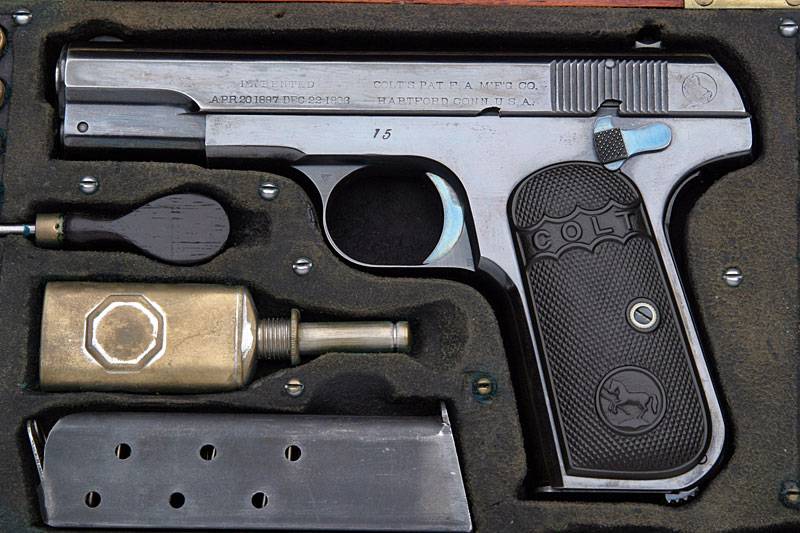 When the U.S. Army announced a contest in 1910 for a pistol that was supposed to replace revolvers in it, Savage presented the gun under the cartridge .45 ACP. He had to compete with John Browning and Colt. Won "Colt" with the M1911 model. But a number of circumstances need to be clarified. Firstly, these companies have produced pistols designed by Browning for many years, improving them from sample to sample, and under the cartridge .45 ACP since 1905 year. And secondly, the Savage 45 caliber pistol was just an experienced model. 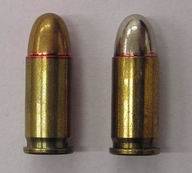 Cartridge 7,65x17 mm 32 ACP left. On the right is his military model with nickel-plated bullets

Be that as it may, but the Savage pistol of the 7,65 mm caliber did get into service. But not in the USA, but in France, where he received the name "le Pistolet Militaire Savage". And they were purchased quite a lot - about 27000 copies. Then the gun was liked by the Portuguese Navy, which supplied the 1200 pistols "Pistola Savage da Marinha portuguesa M / 914", caliber 7,65 mm. 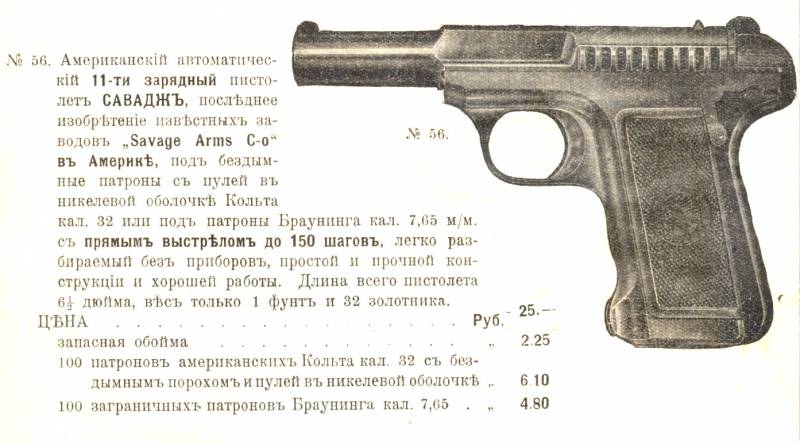 "Savage" became widespread in other European countries, and enjoyed popularity in the Russian Empire. In addition to the high fighting qualities of our compatriots, the price was also attractive - 25 rubles, while the similar "Colt Pocket Pocketless" M1903 cost 34. Interestingly, in tsarist Russia of the beginning of the century, American pistols were valued more than European ones, and browning, Mausers, and Draze were sold on average at 16-25 rubles, and Savage, although it was an “American,” cost almost the same. To officers he was allowed to wear out of order. 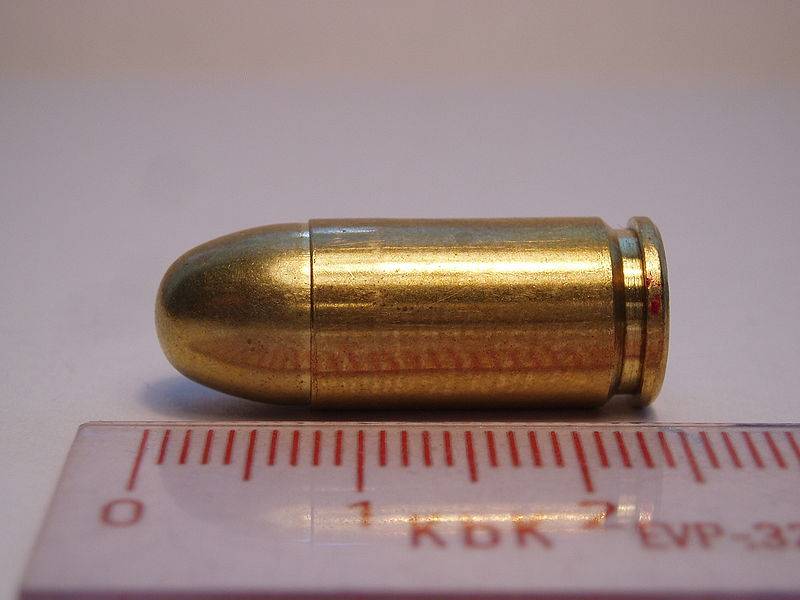 But the largest M1907 pistol achieved in the civilian weapons market in the United States. Why not buy them, including shooting at picnics. When the release of this model was discontinued in 1920, it turned out that the total number of pistols produced was something around 235000 units. Eight years later, the production of pistols was completely stopped, and Savage Arms Co completely switched to rifles. However, in the story with her M1907 pistol, she will remain forever. 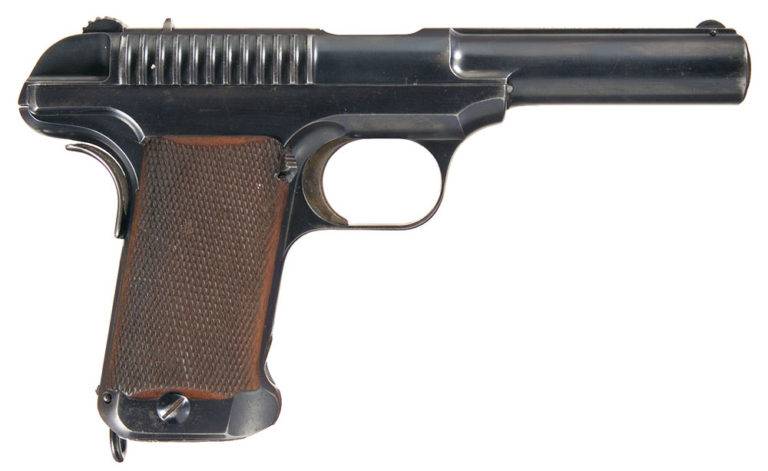 Savage under the cartridge .45ACP.

PS It is interesting that Elbert Hamilton Searl continued to engage in inventions all this time, and in 1916-1917. created an original lever-operated pistol that allows the trigger of the trigger and the ejection of the magazine with just one shooting hand. 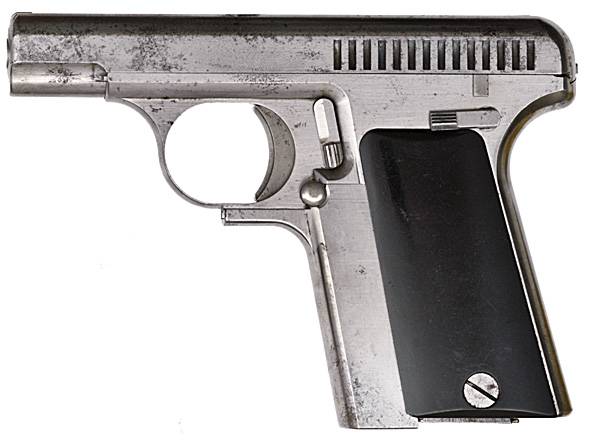 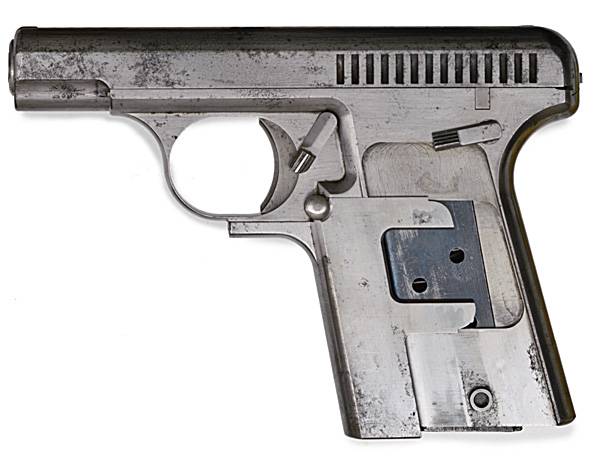 Sirla pistol with the handle removed