October 12 2019
18
Weapon and firms. It always has been and will be that "Best alien" often not accepted only because there is "worse, but ours." Oh, the priority of “our own” is in the technology under the tinkle of political gossip: “We are great, we are powerful, higher than the sun, more clouds!” And it happens that everything is just the way it is. Well, almost like that! For example, the Italian battleships “Vittorio Veneto”, “Littorio” and “Roma” were better than the English “Queen Elizabeth” and “Barham” in the Mediterranean Sea, but in the battle at Cape Matapan it turned out that their role in the victory of the English seemed to be played differently an important factor, namely, the presence of radar on British ships and its absence among Italians. Although their ships themselves were very good. 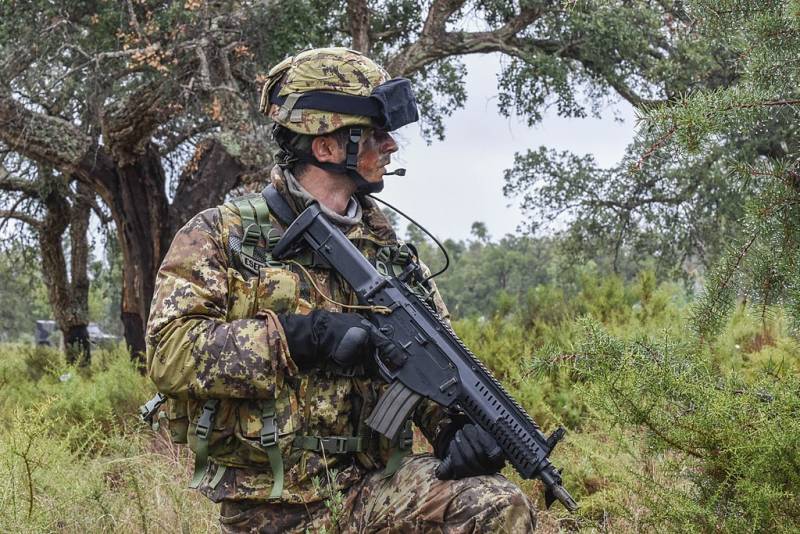 “There is nothing more beautiful than a strong and rich family!”

As applied to small arms, this most often looks like this: “I want my own national automatic rifle” and “I don't want a Russian AK and an American M16.” A similar situation took place in modern Italy. And if in other countries weapons are engaged in firms that have long been led by boards of directors, and their names themselves are a tribute stories, in Italy, families and then everything else deal with weapons and everything else first! And here the name "Beretta" is not at all an empty phrase. It belongs to the same family and company for more than 500 years! Well, which country can boast of something similar? At least the fact that her pistol won the contest to replace the famous Colt 1911A1 pistol in the 1985 year speaks of the quality of the weapons of this company. Then "Beretta" received a contract for the production of US Army 500 000 pistols M9 and ... built in America, a well-equipped company in the city of Akkekik, in the state of Maryland. The parent company Beretta also owns Beretta USA, Benenelli, Franchi, SAKO, Stoger, Tikka, Uberti and also owns 20% of Browning shares. 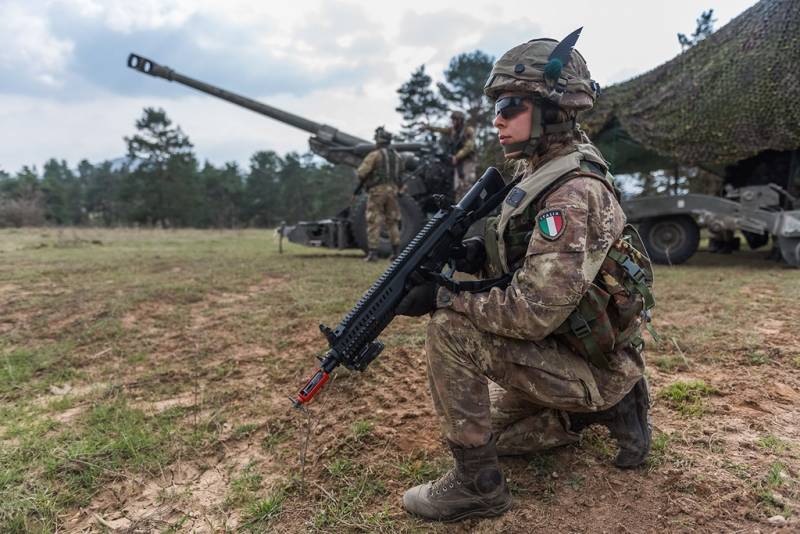 However, such prosperity and prosperity did not immediately come to this company. After all, Italy lost the war together with Germany, the Beretta company (it happened) until the end of the war supplied Germany with arms and it is not surprising that the victorious countries at first entrusted it with only ... repairing the American Garand M1 rifles. The Italians repaired them, and did it so well that they eventually created their own BM-59 rifle. It seems to be a complete analogue of M14, but only now it fired for some reason more accurately. And then it started ... 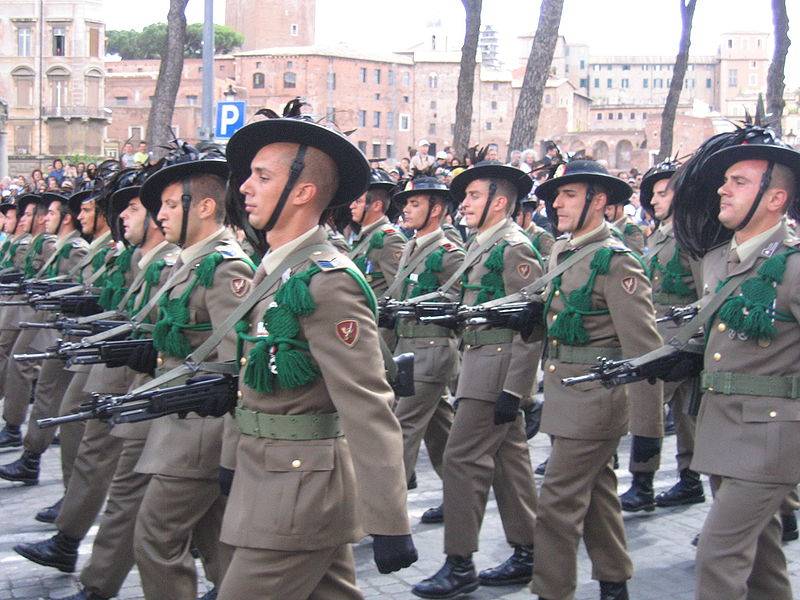 There are Italian “bersaliers” with AR-70 / 223 rifles ... By the way, quite a funny film “Women and Bersaliers” was shot about them

Already in the 1968 year, the Beretta company designed an automatic rifle AR-70 / 223 on the 5,56-mm cartridge M193, which began in the 1972 year to come into service with special forces. It is interesting that both its trigger and gas engine were very similar, or rather, almost identical to those of our Kalashnikov assault rifles, but the receiver, which she “cracked”, was explicitly borrowed from rifles such as the FN FAL and M16. The gas engine was designed so that it operated with a long working stroke, and the barrel was locked by turning the bolt and setting it on two combat stops. That is, it is obvious that good is always good, to be sure. But ... why then take and not adopt the same copy of the AR-15 rifle, replacing the direct gas supply to the bolt with a piston? A license to issue it is easier to buy than an easy one, and replacing one unit with another is even easier ... But no - we want everything our own, and in the external design (“let our rifle be the most“ chubby rifle in the whole world ”!) And in the details of its internal devices.

Following this rifle in the 1985 year (and on its basis), the AR-70 / 90 rifle was developed, but already under the SS109 cartridge - the standard 5,56 × 45 mm NATO cartridge. It introduced a number of “modern” innovations of the time: three shots were cut off during firing, and the store’s receiver was made according to the STANAG 4179 standard so that stores from M16 could also be inserted into it. Fashionable at this time, the carrying handle, made in the manner of the M16 combined with the sight, also fell on this rifle. 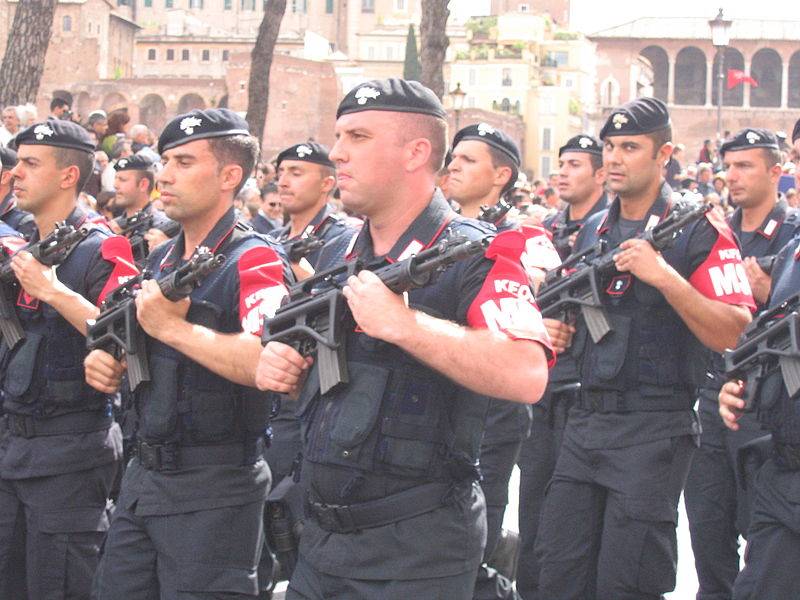 And these are the famous Italian carabinieri with carabiners SCP70 / 90

And then time passed and the mod came to modular weapons. And immediately the Italian army needed another automatic rifle of a modular design. The concept of the new model was linked to the Soldato Futuro program - "Soldier of the Future", and it was launched into mass production in 2008, initially as a system of commercial weapons. The GLX160 grenade launcher for 40 × 46 mm ammunition, which can be mounted under a rifle or used with a special stock as a stand-alone weapon, was also created in a kit for it. And in the period from 2008 to 2014 for the army of the Italian Republic, the naval fleet, the Italian Air Force and Special Forces supplied about 30 ARX000 rifles under the standard 160 × 5,56 mm NATO cartridge, then under the “Russian cartridge” 45 × 7,62 mm (model introduced in 39) and, finally, ARX2012A160 under the NATO cartridge 2 × 5,56 mm, which were used in a number of "hot spots", including Afghanistan. The new rifle was supposed to be a replacement for the AR45 / 70 (and it has become!) As a standard assault rifle for all the armed forces of Italy, including the army and special forces. 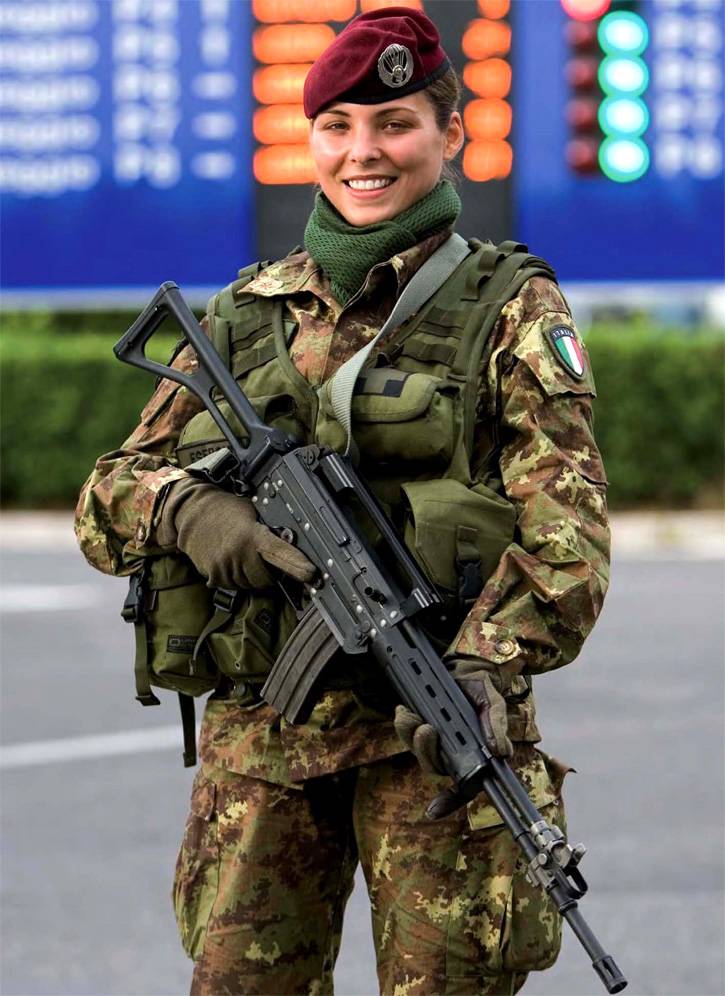 In the 2013 year, Beretta also introduced the ARX160 A3, which is an improved version of the ARX160. Improvements were in the design of the forend (the barrel cooling was improved on the new one), using the Picatinny rail also from below, as well as the pistol grip of a more ergonomic shape.

In 2014, the Italian Ministry of Defense allocated 2,7 million dollars to Beretta to develop a new ARX200 rifle. In addition, the Ministry of Defense announced that it is quite possible for the army and special forces to also need 1170 rifles under the NATO cartridge 7,62 × 51 mm.

At the end of 2015, the company introduced a new ARX200 rifle chambered for 7,62 × 51 mm, which is a derivative of ARX160. The Italian army plans to adopt the ARX200 rifle in two versions: with a folding telescopic stock and a sniper variant (DMR) with a fixed stock. ARX200 plans to fill the gap in the armament of Italian infantry between the NATO 5,56 × 45 mm assault rifle and large-caliber sniper rifles - a solution based on combat experience gained by the Italian military in Afghanistan. Today it has passed all of the following necessary tests: low m high temperature, it was poured with sea water, frozen in ice, sprinkled with salt, sand, dust, and wallowed in the mud, shot without lubrication, tested for soldier resistance and “protection from the fool” and all theirs, this sample survived successfully. ARX200 has three positions of a gas regulator for shooting under normal conditions, in adverse conditions and shooting at low temperatures. Rate of fire around 600 – 650 rounds per minute. The ejection of the sleeves is carried out only to the right, but the handle of the shutter handle can switch from the right to the left. Weight 3,9 kg without magazine. 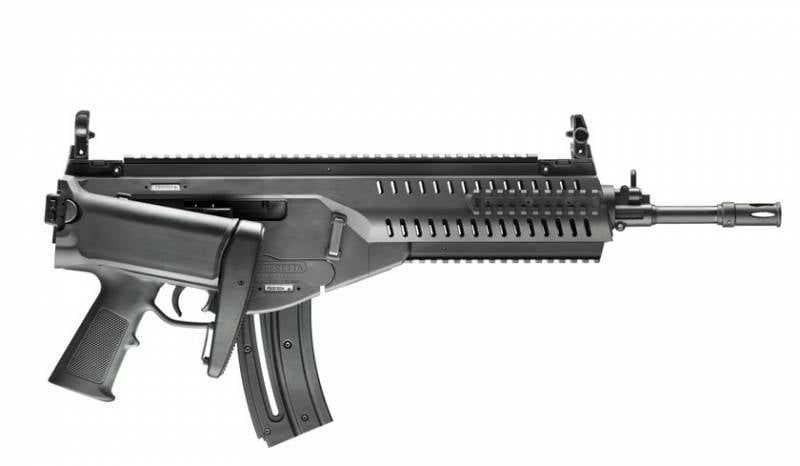 However, it is thought that Italians can not be in a hurry. Moreover, the ARX160 rifle is very well sold abroad. So, in February 2013, the Argentine army received an ARX160 rifle and a GLX160 grenade launcher to evaluate them as weapons of national special forces. And in December of 2016, the state-owned Argentine arms manufacturer Fabricaciones Militares finally signed an agreement with Beretta to manufacture ARX200 under license. The Indian Army also tested the ARX160 as a replacement for the INSAS rifle. But this tender was withdrawn in June 2015 of the year. 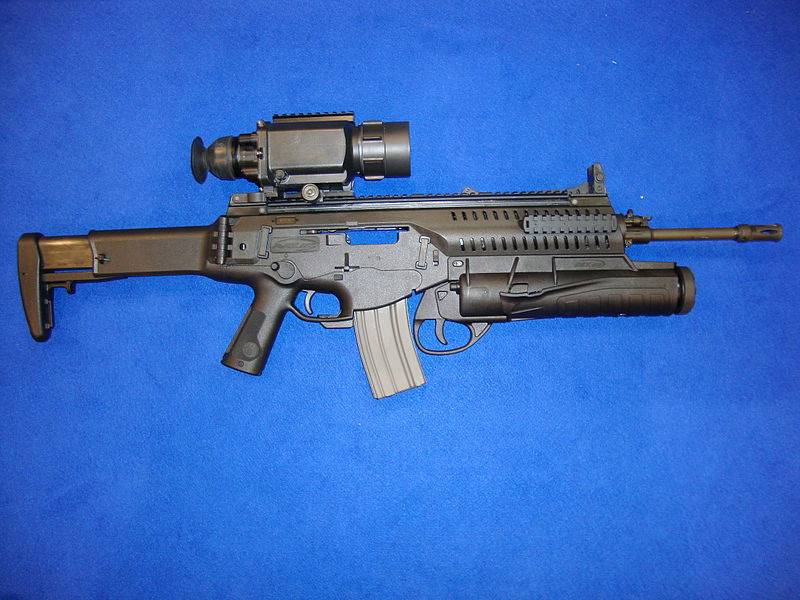 ARX160 A3 was one of the five finalists of the French army tender to replace FAMAS, but it failed to win, the German HK416 rifle was (or seemed!) The best in terms of basic indicators. 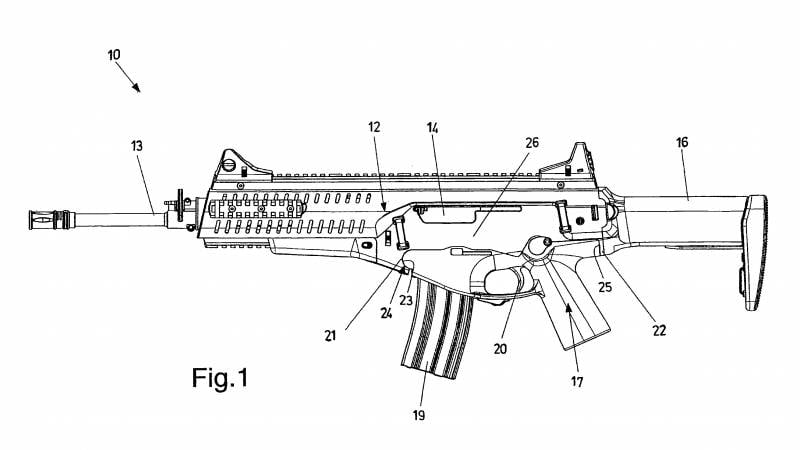 US Patent US7941958B1 for ARX160 Rifle Device. The scheme of the internal device 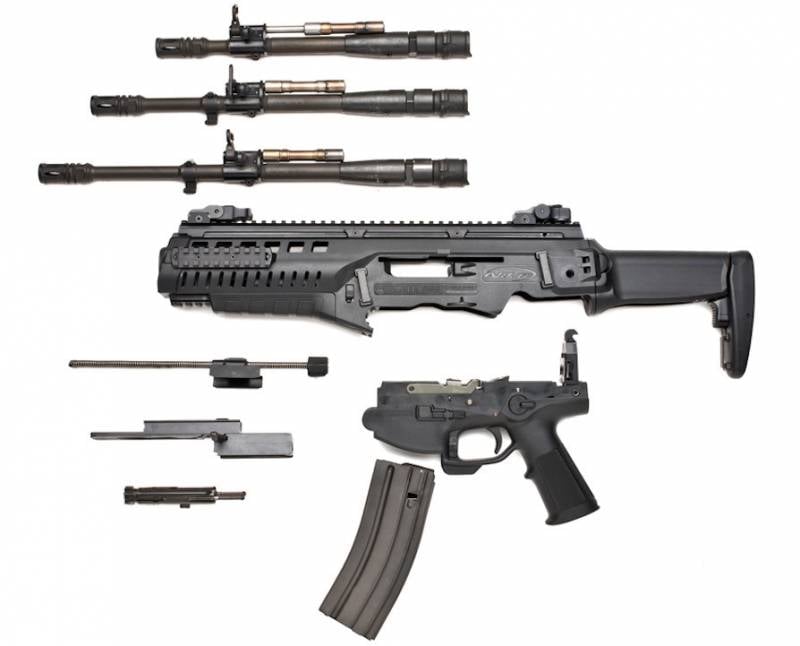 Incomplete disassembly of the ARX160 rifle. Three interchangeable trunks at the top

The magazine latch on the rifle is not one. There are two of them: left and right. Probably for greater convenience. The shutter handle can also be rearranged as you wish. There are two windows for ejecting spent cartridges, both on the left and on the right, and you can change them by pressing the bullet nose with a special button. The rifle also has a quick-change barrel, which can be removed and replaced in seconds without any tools, there are also four Picatinny rails and a folding telescopic butt.

For ease of use on the rifle installed as many as six swivels!

The lightweight barrel is cold-forged at the Beretta plant in Gardone Val Trompia in Lombardy. The barrel length for the rifle is 16 inches (40,6 cm) for the standard barrel and 12 inches (30,48 cm) for the "carbine". The flame arrester has five radial cuts and four smaller cuts to compensate for the muzzle of the barrel when firing in bursts. The rifle case is very modern in design, made of plastic, as is the store. The bayonet is mounted above the barrel, not under it. 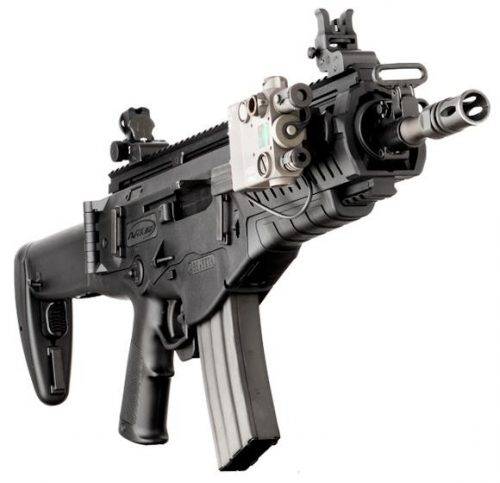 A lot of equipment can be hung on a rifle

The ARX160 operating system is unique in that the piston of its gas mechanism moves a distance of 50,8 mm, while for others, the piston stroke is literally a few millimeters. Therefore, the piston goes behind the bolt frame almost to its stop, which ensures a low level of gas pressure in the barrel and ... a more comfortable return.

The shutter has seven protrusions and an extractor, both left and right, without an ejector. The extractors are spring-loaded, and the liners fly out when ejected at an angle of 45 degrees from the barrel. This is convenient, since it excludes their getting into the shooter's face.

Sights are made of the same polymer as the store’s receiver. The front sight mount is adjustable horizontally and height, and the rear sight has six positions for shooting in increments of 100 – 600 meters. The main optical sight is Aimpoint ACIES, the Italian version of Aimpoint CompM2. Telescopic sights, night vision systems, front handles and other accessories are being developed as part of the Soldato Futuro program.


The ARX160 modular assault rifle is used only by military and law enforcement agencies. She can use cartridges 5,66 × 45 mm NATO or 7,62 × 39 mm. In this case, it is necessary to replace the barrel, bolt, receiver lower assembly and magazine.

ARX160 A2, also called ARX160 SF (special forces), is similar to ARX160, but has a shorter stock, an extended Picatinny rail at the bottom of the handle and a barrel length of 305 mm. 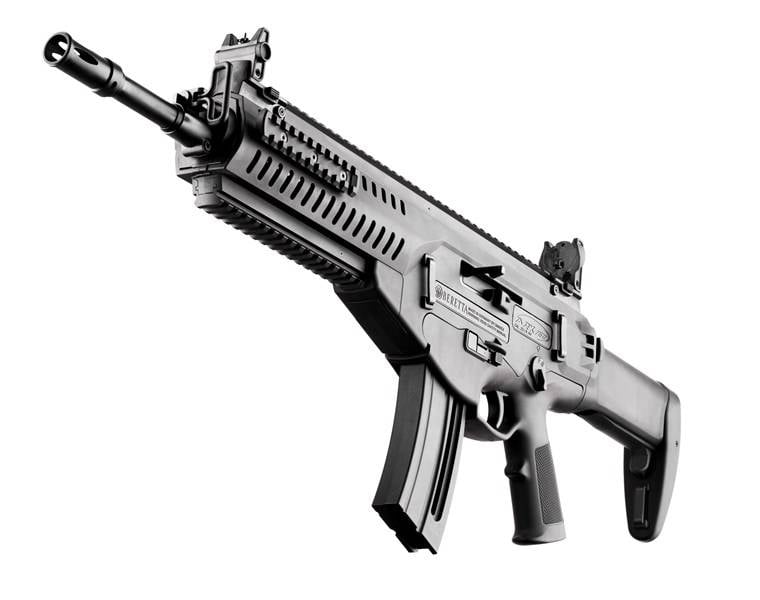 The Beretta ARX160 A3 is an improved version of the ARX160 and has similar characteristics with it. Increased ventilation slots in the upper row on the fore-end (or the upper receiver, as it has become fashionable to call this part now). The vent in the bottom row are the same size. This is done to lighten the weight of the rifle and improve air circulation around the heated barrel. The barrel length can be both 280 and 406 mm. 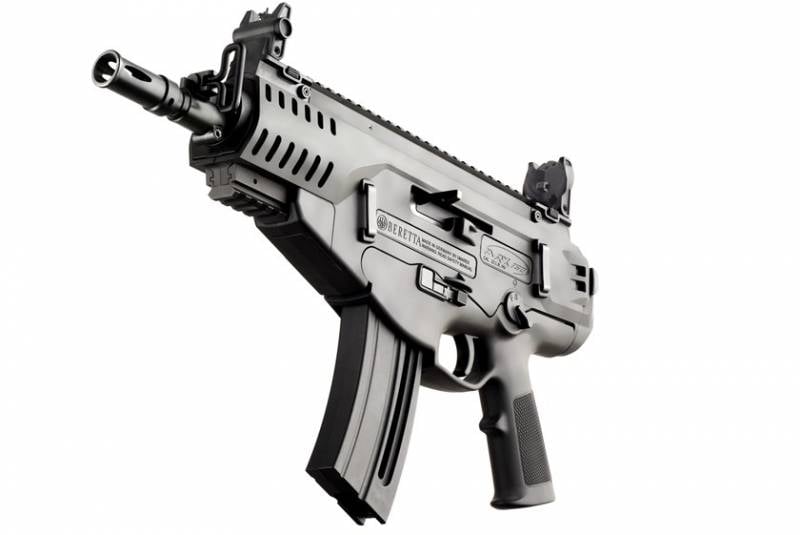 ARX100 is a semi-automatic version of ARX160, for the civilian market. This rifle uses 5,56 × 45 mm NATO or .223 Remington cartridges. All other design details remained unchanged.

The ARX160 22LR is another semi-automatic version of the ARX160, which enters the civilian market. It uses the .22 Long Rifle cartridge, which makes this rifle an ideal weapon for training shooting. Barrel length 406 and 280 mm, magazines on 5, 10, 15 or 20 cartridges. 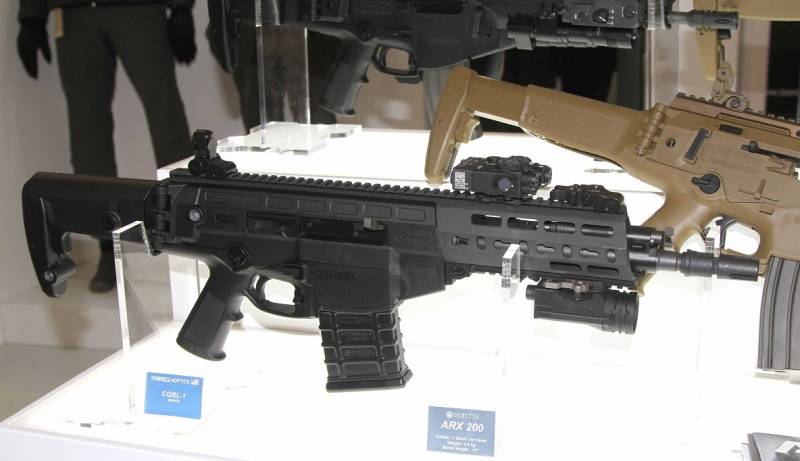 Another photo of ARX200. Everything seems to be fine, but purely visual ... it’s somehow very big. Don't you think? The thinner AR-15 in my opinion (whatever the technical specifications) looks somehow better ...