October 13 2019
17
Weapon and firms. Мы continue our story about the companies, one way or another connected with the production of automatic rifles based on AR-15, the legendary Eugene Stoner rifle, which, as readers of “VO” have probably been able to notice from the previous materials of the cycle, is not released by the very lazy industrialist in the West gunsmith. Accordingly, there are a lot of companies that produce it, and different companies. There are recently created ones under the brand name, and there are some история which entered the World Foundation for the History of Arms. Again, there are more well-known companies, and there are less, but equally interesting, and sometimes even more interesting. One such company is the Savage Arms Company, which is one of the oldest American enterprises, which, in addition to small arms, also produces various types of ammunition, as well as accessories for it. The company is headquartered in Westfield, Massachusetts, and one of its direct manufacturing units is in Lakefield (Ontario, Canada). It was founded in 1894 by a certain Arthur Savage, a man with a very, let's say, unusual biography, with which we will begin our story. 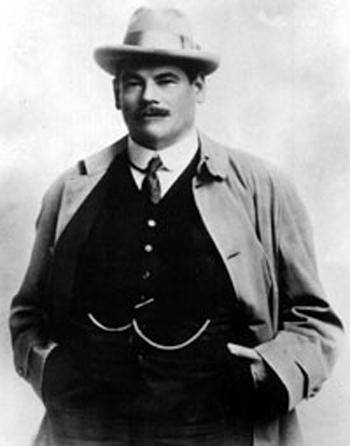 Arthur William Savage was born on 13 on May 1857 in the city of Kingston on the island of Jamaica. Moreover, his father was the British Commissioner for Education received there freedom of black slaves. Savage Sr. also did not spare money on the education of his son, and he studied in England, Britain and the USA, in the city of Baltimore in Maryland. After graduating, Arthur Savage married Annie Bryant, from whom he had four daughters and four sons.

At thirty, Arthur Savage, for some reason, went to Australia with his family. If it was a passion for adventure, then he could fully satisfy it there: he often lived in a gold digger van, and then he lived for about a year among a tribe of local natives, either as a hostage or as a guest. But something else is important here: Savage eventually became the owner of almost the largest cattle ranch in the land of Australia and began to receive corresponding income from it. 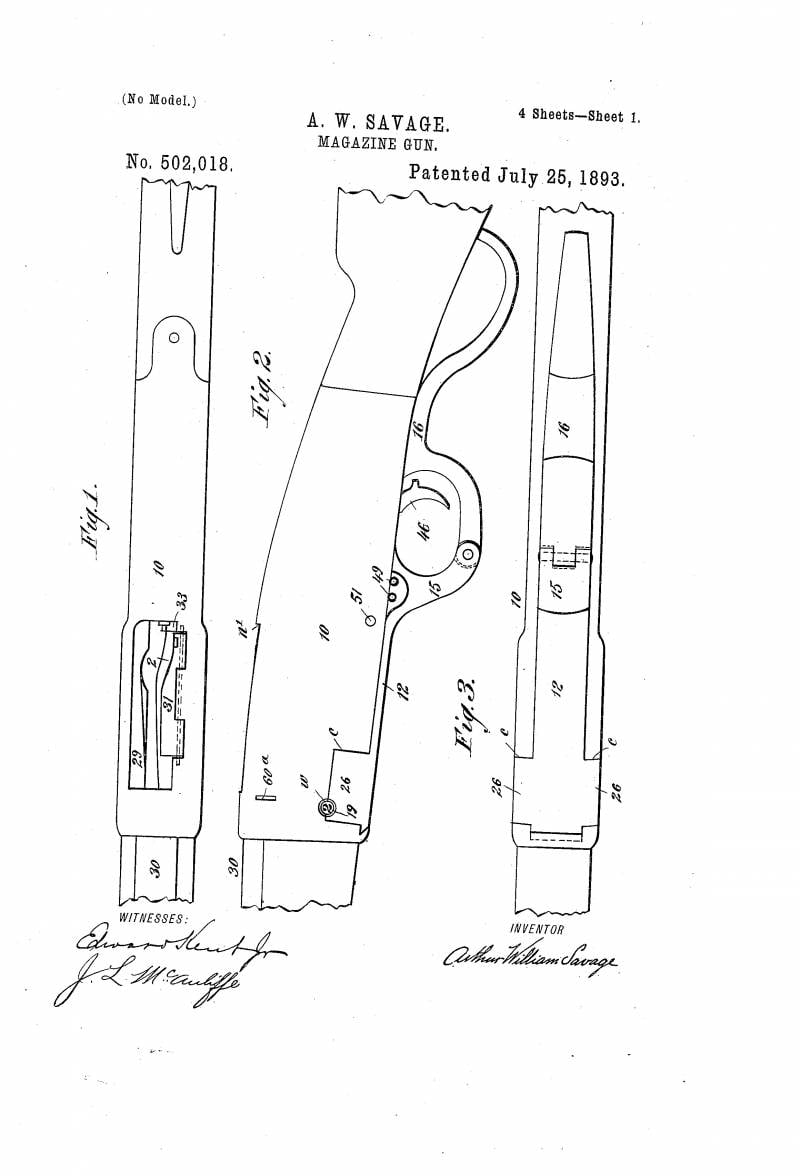 And he would have lived happily in Australia in a two-story house with columns in the colonial British style, but then he again suffered in the United States. In 1892, he settled in Utica, New York, where he hired on the Utica Belt Line Street railway line and worked there so well that he eventually got the position of its superintendent. And then two years later, Savage and his eldest son Arthur John took, and opened their own weapons production, called Savage Arms. And they were not even afraid of competition with companies such as Colt and Winchester. Although it cannot be said that they did not have any experience in the arms business, because, while working on the railroad, Arthur also managed to work part-time at the local arms factory. And before that, he ordered a Colt company to manufacture a rifle to compete in a new rifle for the US Army. His development did not get into service, but the fact that he attracted the attention of a company so famous at that time speaks for itself. So he had both money to engage in design, and a certain experience, and, which, undoubtedly, obvious ability to design in the field of weapons. 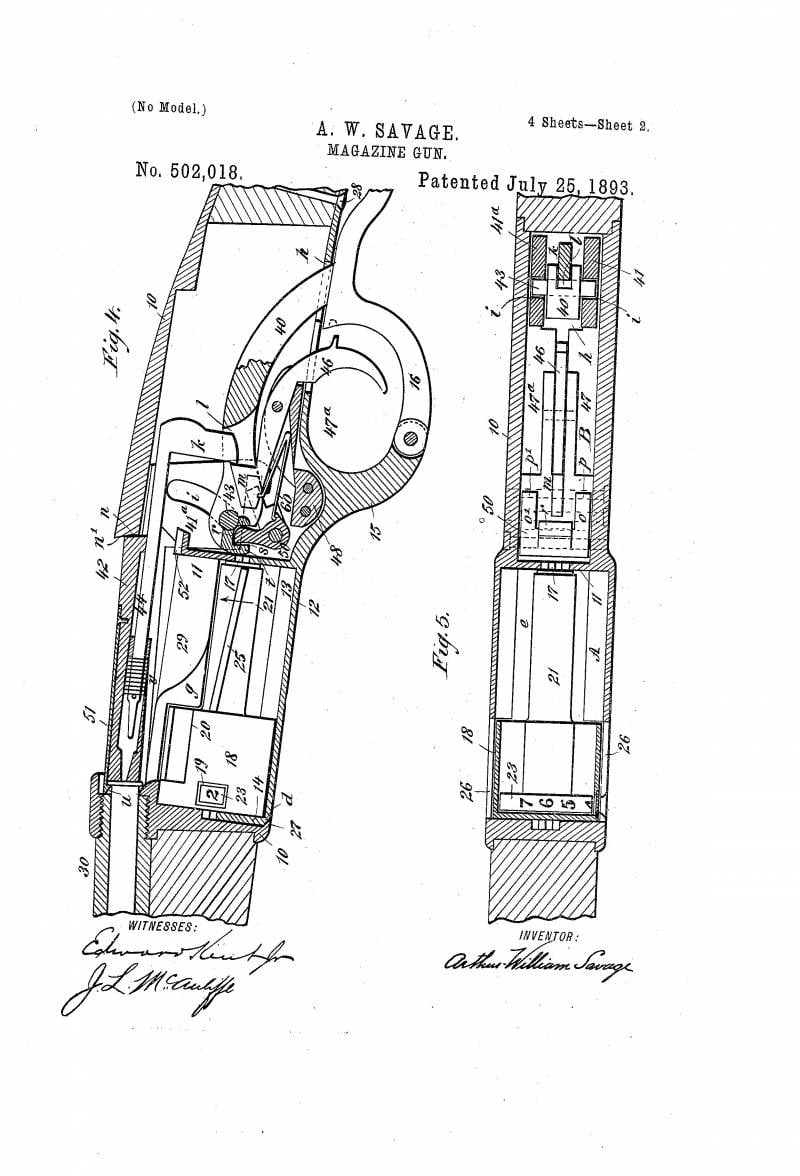 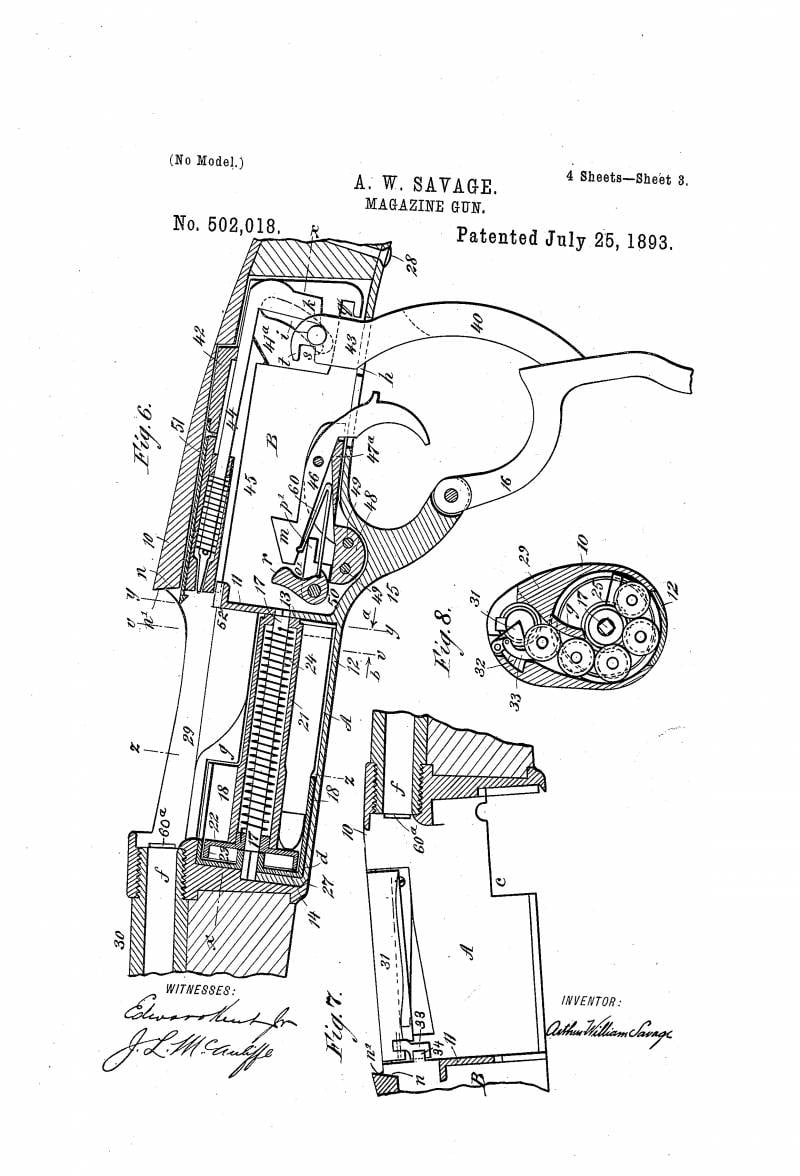 This first model was followed by the second one - the 1894 model. It, like the previous one, was recharged by means of the “Henry staples” movement, but at the same time it had a rotary magazine rather than an underbarrel. The rotary magazine seems to be similar to the drum, but in fact it is very different from it. The drum is both a store and a chamber, while cartridges are only stored in the rotor and are already fed from it into the chamber with a shutter. It is important that in such a store the cartridges are located without touching each other, and not like in the "hard drive" - ​​one after another. That is, in Savage, the bullet nose could not pierce the capsule of the cartridge located behind, and if so, then in the new rifle it was possible to use the most advanced ammunition of that time, that is, cartridges with pointed bullets. And Savage himself made such a cartridge, and he received the designation .303 Savage. Like many rifle cartridges of those years, he had a rim, but his bullet had a pointed shape. It turned out that the new cartridge is superior in energy and ballistic cartridge Winchester .30-30, although not very significantly. Nevertheless, as a hunting cartridge, he retained his popularity until the 30 of the XX century. 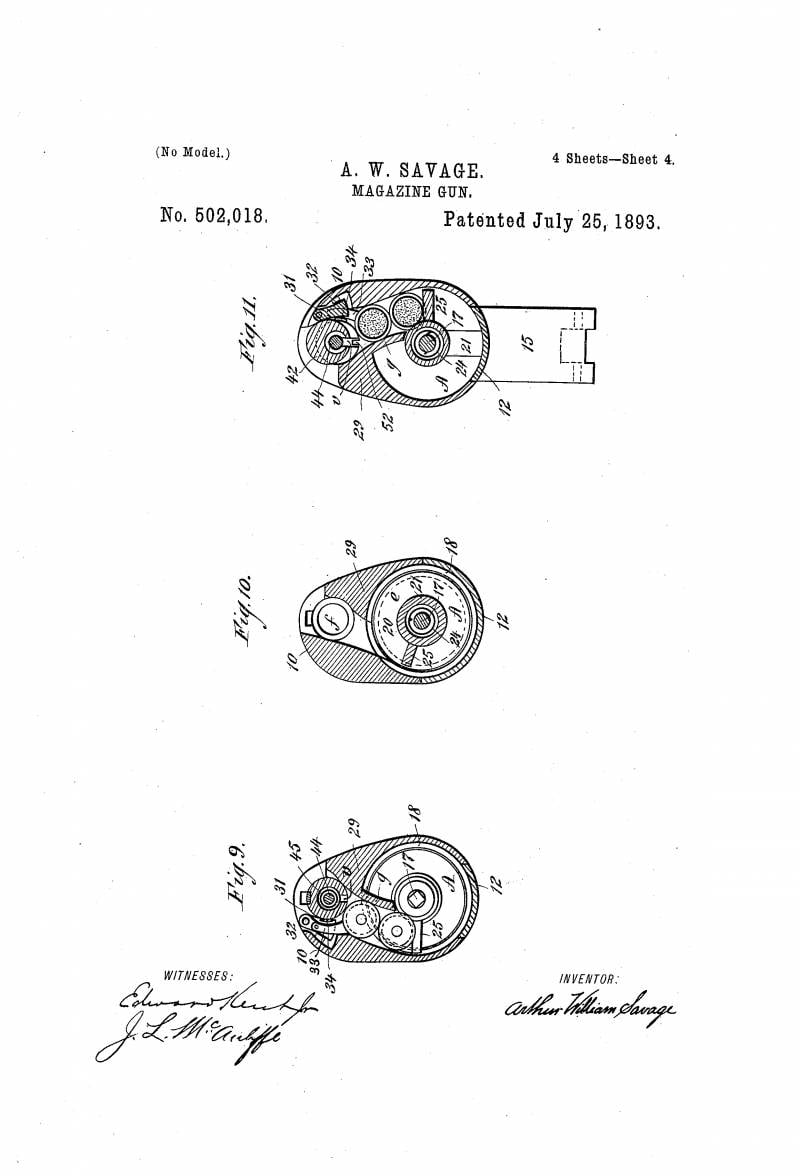 A year later, the “1895 model”, released by Marlin Repeating Arms in the amount of 9600 units, followed. And then she made a real splash in the American arms market! Firstly, she did not have any protruding parts, secondly, her entire mechanism was most reliably protected from dust and dirt inside the receiver; that is, this guaranteed its reliable and uninterrupted operation in any conditions. It is interesting that the trigger of this rifle was not just hidden, but was generally absent as a part: the Savage rifle had a design with a hammer, which ensured a reduction in the mass of its moving parts at the time of the shot, and as a result, increased accuracy. The rotary magazine on 8 cartridges was also a novelty then, as was the indicator on the number of cartridges on the left side of the receiver. 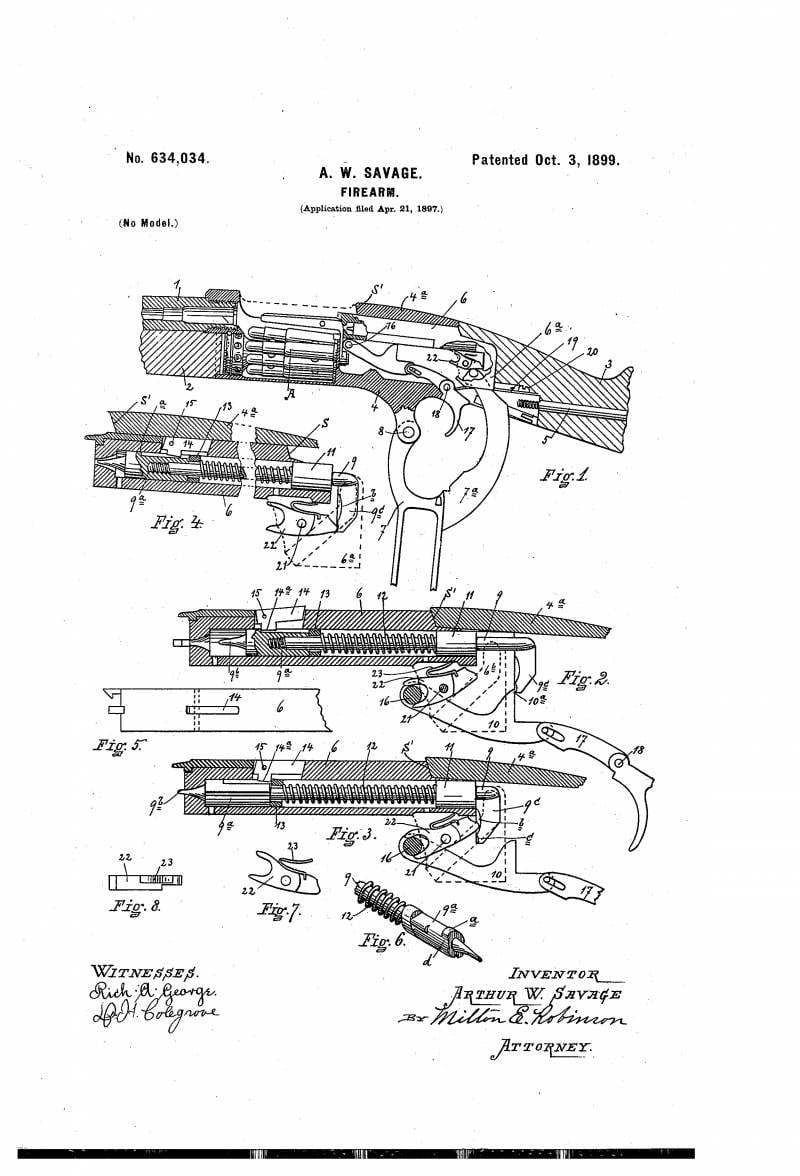 Then Savage Arms with the 1895 model won the New York National Guard competition, but because of the undercover intrigues, the guards never received it, and remained with the old Springfield M 1873 rifles. She also didn’t go into the army, having lost the Norwegian Krag-Jorgensen rifle at a competition of army rifles. However, this did not affect the popularity of the new rifle and they bought it very well. And then, in 1899, the M1899 rifle appeared with a five-round magazine, a shortened barrel and a modified scope, and now it literally conquered the American market for hunting weapons. From 1899 to 1998, it was produced in an amount of more than one million copies under cartridges of various calibers. That is, than she did not shoot. These were the cartridges .303 Savage, and .30-30 Winchester, and the later and strong cartridge .300 Savage, its competitor is the cartridge .308 Winchester, and .358 Winchester, and 7-mm-08 Remington, and 8-mm .32-40 Ballard. Moreover, in the 1899 year, Savage suggested converting any previously purchased rifle or carbine of the 1895 model of the year into the configuration of the 1899 model of the year for a fee of only 5 dollars. 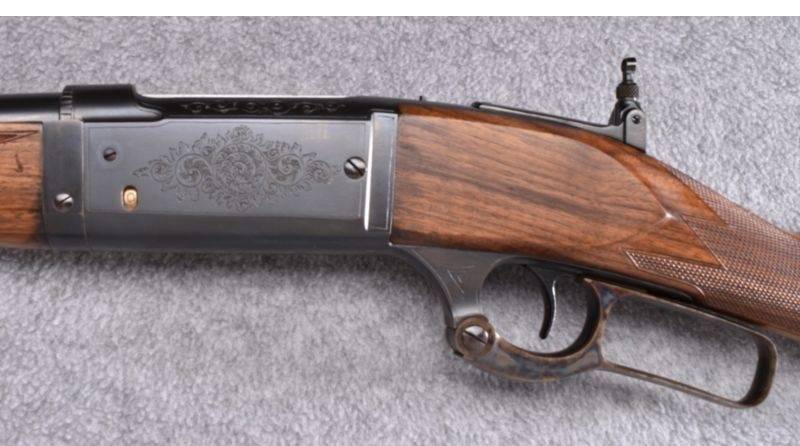 However, this rifle still fell into the hands of soldiers. During the First World War, the M1899-D Musket rifles were armed with the Montreal Home Guard. They were released in the amount of 2500 pieces, and they all had a completely military look: a long barrel, covered with a barrel overlay along its entire length, and, of course, a bayonet mount. Moreover, the guards needed to purchase these rifles, for their own money and at the same time engrave their own name and surname on them.

Rifle of the Montreal Home Guard

It should be noted here that, competing with the Krag-Jorgensen rifle, Savage also had competitors among the Americans, one of them - John H. Blake from New York, created a rifle in some way similar to his own, but with a direct-acting sliding shutter . The shutter here hardly makes sense to describe, but the store for it turned out from its creator and really very original. Like Savage’s rifle, it was rotary (so the members of the competition committee didn’t even know what to call it correctly), only the rotor with Blake’s cartridges was removable, and it was ... a clip loaded into the store. 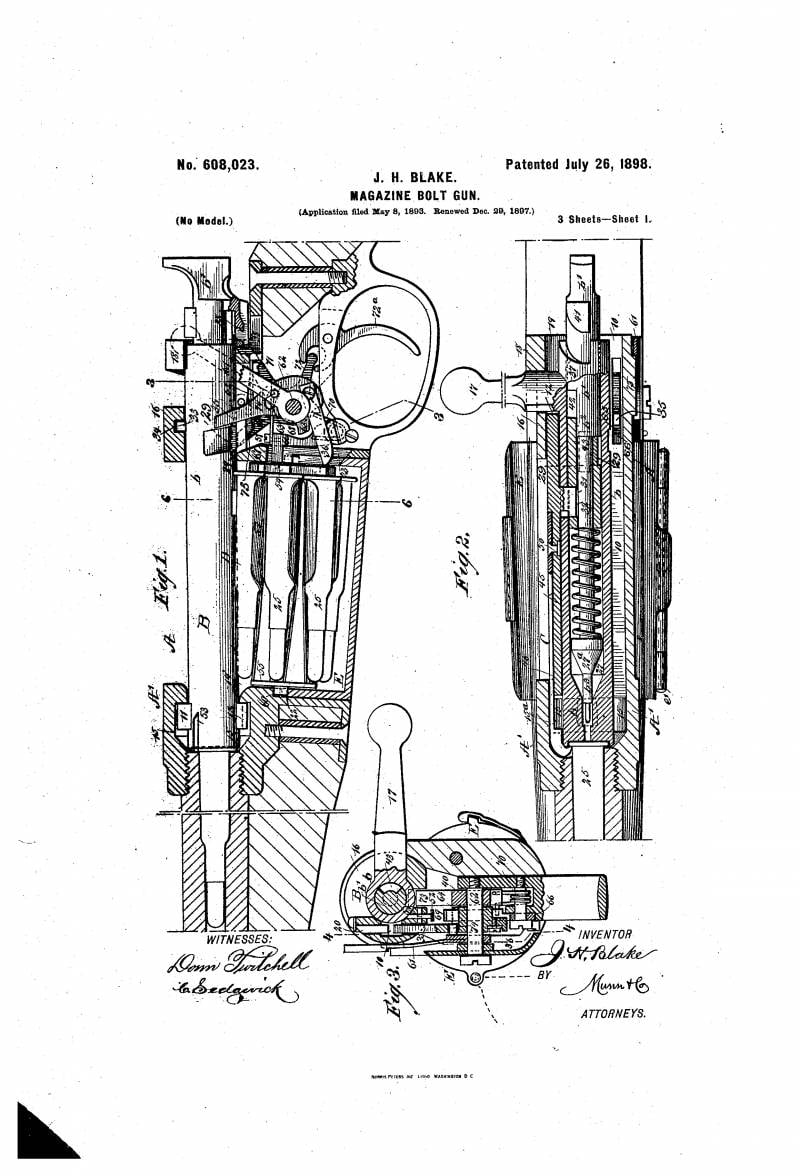 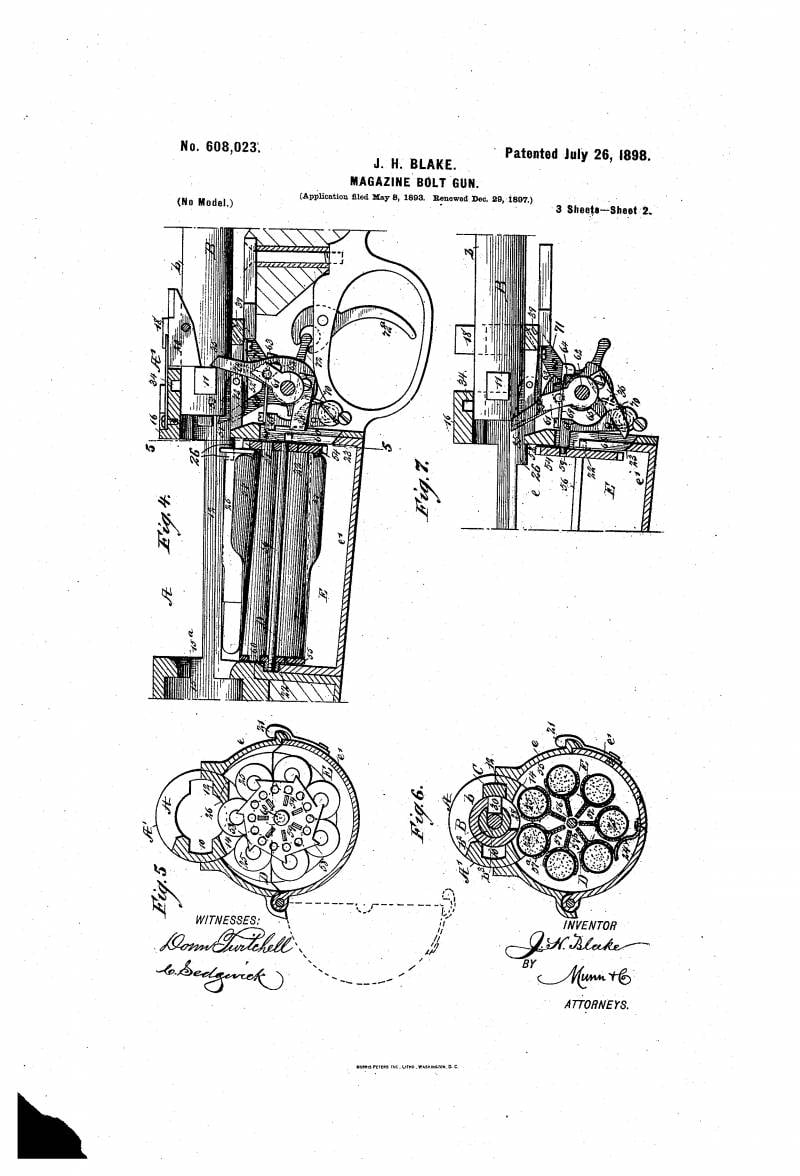 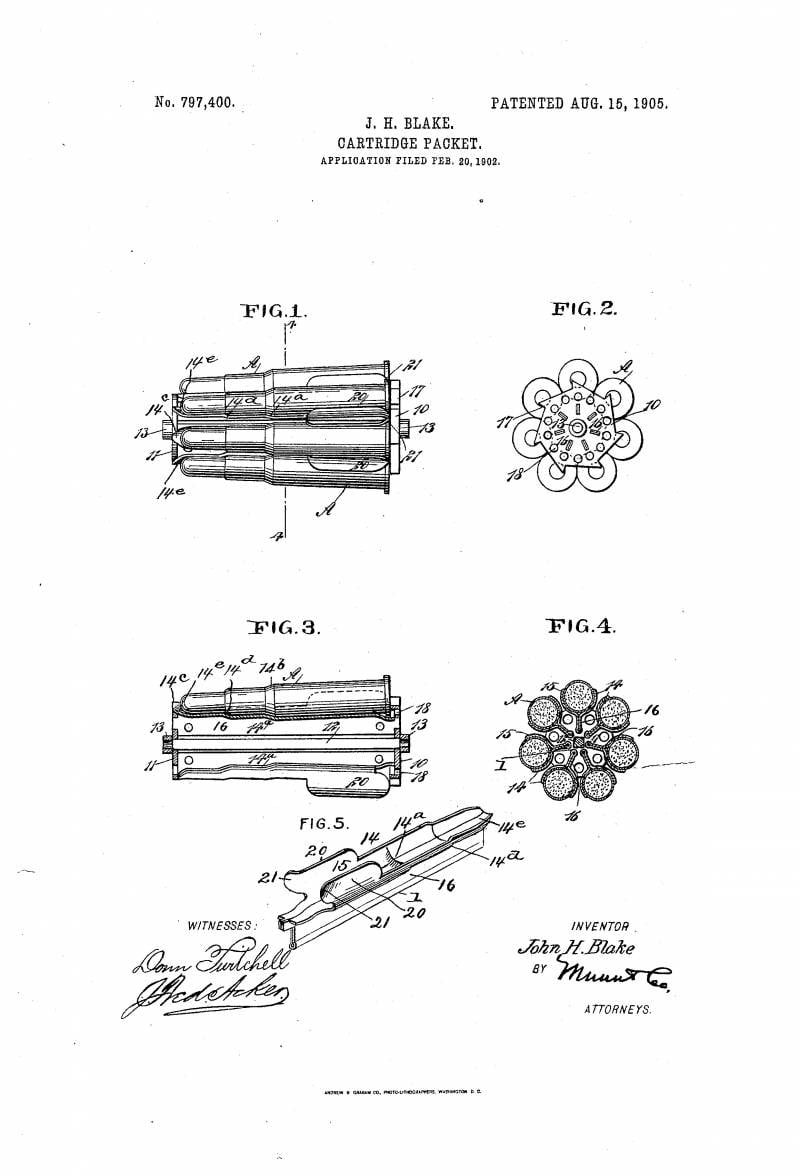 To load a rifle, a soldier should first open a semicircular magazine cover on it, which was closed by a latch, then take a cylindrical clip, resembling a revolver drum, only without walls (it contained seven .30 Blake cartridges), and insert it into the store so so that it is fixed inside him. Now it was possible to slam the cover and shoot. Although seven rounds of ammunition were placed in Blake’s store, and another one could also be inserted into the barrel, the US military did not like such a complicated loading process, and its 1892 model of the year lost the competition. 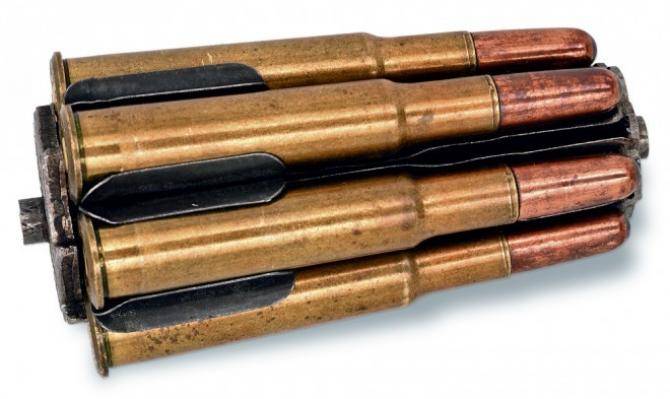 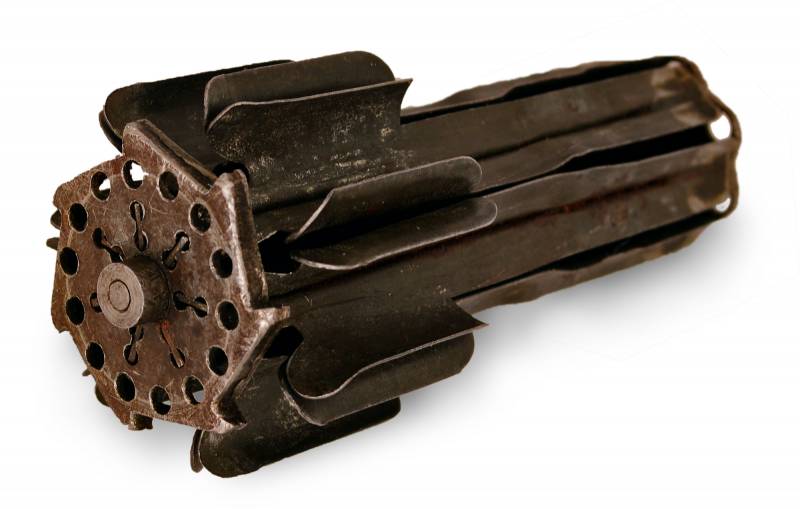 An empty clip to the Blake rifle. 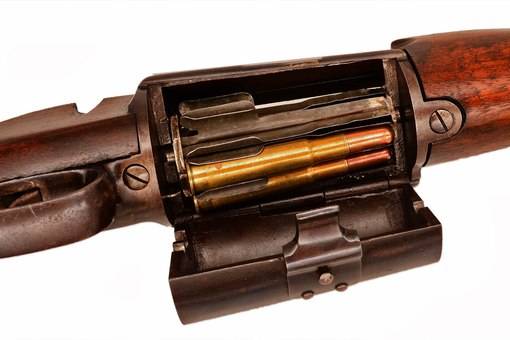 Cartridge holder in the receiver

The hinges of the cover of the Blake rifle store and the lever for switching from single-fire to high-speed.

Its mechanism was excessively complicated, in particular, having a switch from the single-shot mode to the "Rapid" mode - that is, high-speed shooting. In a single shot, the bolt alternately pushed the cartridges into the chamber, the cartridge was rotated, a new cartridge was fed to the feed line, and the spent cartridges were thrown out. 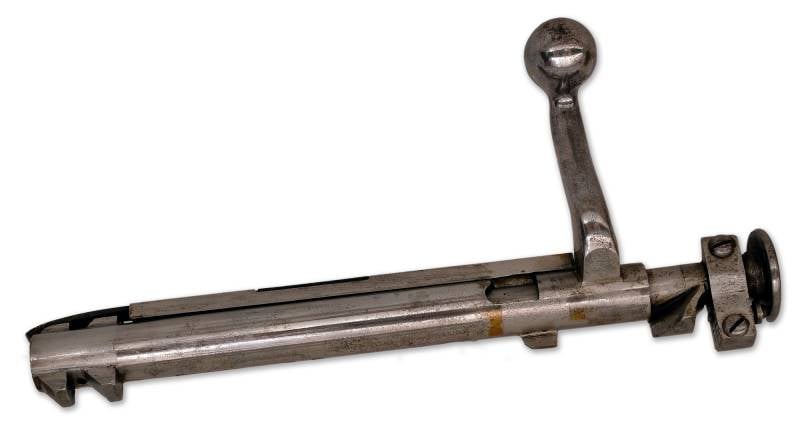 During high-speed shooting, the rifle acted in exactly the same way, but the cartridge holder rose to the level of the feed line, which is why empty cartridges were not thrown out, but remained in the holder. It was removed along with the cartridges, and fractions of a second were saved during the firing process. If desired, the soldier could even switch the rifle to manual reload mode. Then, if the clip was completely shot and filled with sleeves, it would be possible to throw all the empty sleeves out of it in turn by moving the shutter. That is, the design was clearly unnecessarily complicated without any gain in performance. As a result, neither the army nor the American fleet became interested in the Blake rifle. She did not use, in contrast to the Sevage rifle, in demand and in the market of commercial weapons.

The Manlicher Schoenauer M1903 is the only rifle with a rotary magazine that has been in battle. Used in the Greek army

However, the popularity of the Savage rifle was associated not only with its high consumer properties, but also with well-organized advertising, as was the case, for example, in the case of Colt revolvers. It so happened that the leader of the Cheyenne tribe from the reservation in Wyoming, named the Bear, offered Arthur Sevige to sell him a batch of rifles at a very low price, but promised that for this his Indians would advertise his rifles as the best. Savage turned out to be a reasonable person and agreed with this proposal. And everyone was the winner. The Indians received cheap and high-quality rifles, and the company received excellent advertising, since it was with her rifles that Cheyenne participated in speeches telling about life in the Wild West. Moreover, it was after talking with the Indians that he came up with her memorable and very suitable logo for America - the profile of the head of an Indian in eagle feathers, the image of the same Bear, which became Savage a personal gift from the leader.