4 September 2019
28
Weapon and firms. At one time, the Soviet tanker V.P. Chibisov in his memoir "English Tanks at Krutogo Log (Novosibirsk, 1996) he praised the English Bren machine gun very highly, and even spoke of him as a “gentleman machine gun.” However, not only he. In India, he was in service even at the beginning of 21 centuries, and everywhere it showed itself in the best way. But after all, this is, in fact, Czech development, only in a certain way adapted to the technologies of English production and wartime. On the same North Korean and Chinese battle canvases, machine guns ZB-26 are found every now and then. not surprising, because they were delivered to 24 countries of the world, etc. Auger is not accidental. And its very name “Bren” (“Brno-Enfield”) only emphasizes what was the first and what is second. So the Czech arms school has a long tradition and supplies very sophisticated small arms to the modern arms market. 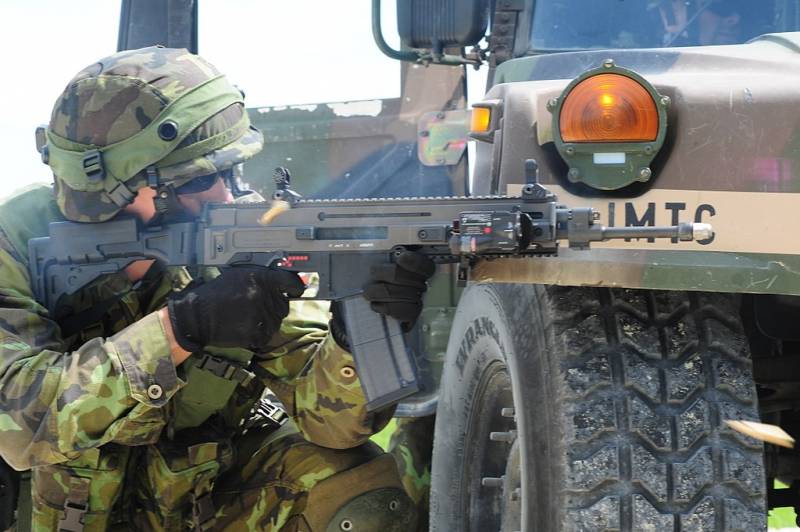 Czech soldier fires from a rifle CZ 805 BREN A1

Even in Soviet times, Czechoslovakia was the only country - a member of the Warsaw Pact, which was allowed to have its own model of an assault rifle, rather than a universal Kalashnikov assault rifle. And since the quality standards for all his armies were the same, this can only mean one thing: the Czech counterpart was practically inferior to our machine, and if in some way it was inferior, it was very insignificant.

One of the last such samples that the Czech army actually received in 2011 was the new automatic rifle, which received the indicative name CZ 805 Bren A1 / A2, under cartridges of the caliber 5,56 × 45 mm. Weapons are available in two main versions A1 and A2. The first is a rifle, the second is a carbine, that is, the same weapon, but with a shorter barrel, for fighters involved in special operations and paratroopers.

The same sample with folded mechanical sights and mounted optical

By and large, the CZ BREN is a whole family of infantry small arms, consisting of such models as the CZ 805 BREN, CZ 807 and CZ BREN 2, which were developed and produced by the company Česká zbrojovka Uherský Brod (Česká Zbrojovka Uherski Brod). The first samples to be replaced in the Czech army Sa vz. 58 were introduced back in 2006, and later the CZ 805 BREN was put into service. Today this system is used by both the Czech military and the Indonesian special forces and even ... the Mexican police. In 2014, the now Slovak army replaced its old vz. 58 on CZ 805 BREN. The CZ BREN 2 modification went to the Czech army in November 2016, and in 2017 68 BREN 2 rifles chambered for 7,62 × 39 mm were received by the French GIGN, maybe in the future the order will be increased, since most of the Heckler & Koch HK416 arsenal is planned replace it with CZ BREN 2 in 7,62 × 39 mm version. They were also received by the Egyptian Airborne Forces and the Republican Guard, respectively, in 2017 and 2018. 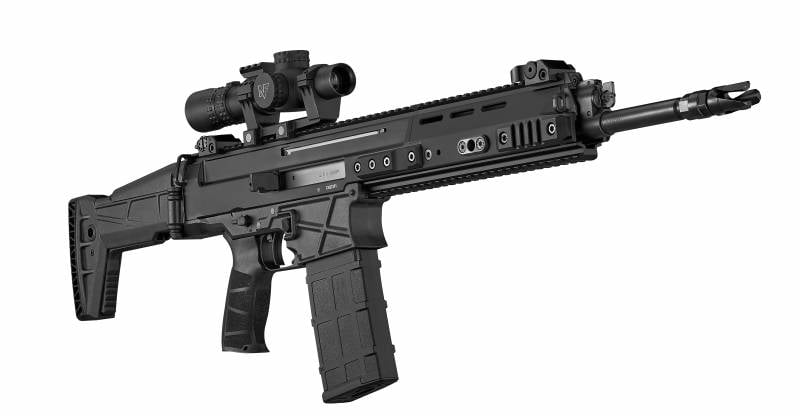 Front view on the right. Clear hole for removing liners

The rifle uses light alloys, steel and plastic. The design is modular, the most modern. It has gas (short-stroke piston) gas automation with a rotating shutter and a forged chrome barrel, which is produced by the Ceska Zbrojovka company by cold forging. The modular design is very popular today, primarily because it allows users to easily change the caliber of weapons and use intermediate cartridges 5,56x45 mm and 7,62x39 mm by quickly replacing the barrel with gas pipes, a shutter, the receiver of the magazine and the magazine itself. The gas regulator allows for precise adjustment. The trigger consists of a separate removable unit, the main components of which are the trigger with a chopper and a four-position switch of fire modes. The stock, unlike the popular M16 rifle, can be folded by turning to the right and at the same time it is telescopically adjustable.

The weapon is equipped with a Picattini rail that runs along the entire receiver. But the edge of the upper bar also has a lower one, and two on both side surfaces, which allows you to install a variety of accessories on the rifle, including optical sights (collimator sights, sniper sights and thermal imager), measuring, marking and lighting equipment. Since the metal plates are compliant with the NATO MIL STD 1913 standard, the lower one also provides the possibility of installing a grenade launcher. A standard arrester, a tip for training firing and a silencer can be mounted on the muzzle of the barrel as standard.

The service life of the barrel is designed for 20 000 shots, the technical service life of the rifle as a whole is at least 20 years. The failure rate is 0,2%, if not taking into account failures due to ammunition. The weapon meets the requirements for reliable operation in difficult conditions (dust, dirt, high and low temperatures) according to NATO requirements. The surfaces of this type of weapon provide minimal reflectivity of light sources and are resistant to abrasion, corrosion, fresh and salt water, aggressive substances and products resulting from firing, and the use of preservatives approved for use in the Czech armed forces. There are no sharp edges and corners on the rifle (they are all flattened), as well as protrusions, except for Picattini slats. Under the barrel, you can attach an additional handle, which does not affect the balance of the weapon. The shutter handle can be installed both on the right and on the left, which increases the convenience of handling weapons. True, the hole for ejecting sleeves is only one and is on the right.

Basic disassembly and assembly of the rifle for routine maintenance can be done without any tools. Maintenance tools, including: a brass brush, an oiler, a universal wrench, a training shooting tip and a cable ramrod are included in the textile bag.

Due to the fact that the magazines for the rifle are made of transparent plastic, the arrow is easy to control the consumption of ammunition. Moreover, the rifle’s kit includes special plastic clips for connecting stores in a package, which is a modern trend of additional equipment stores to “shooter”. The kit for the rifle includes eight 30-loading magazines, that is, wearable ammunition is 240 rounds. 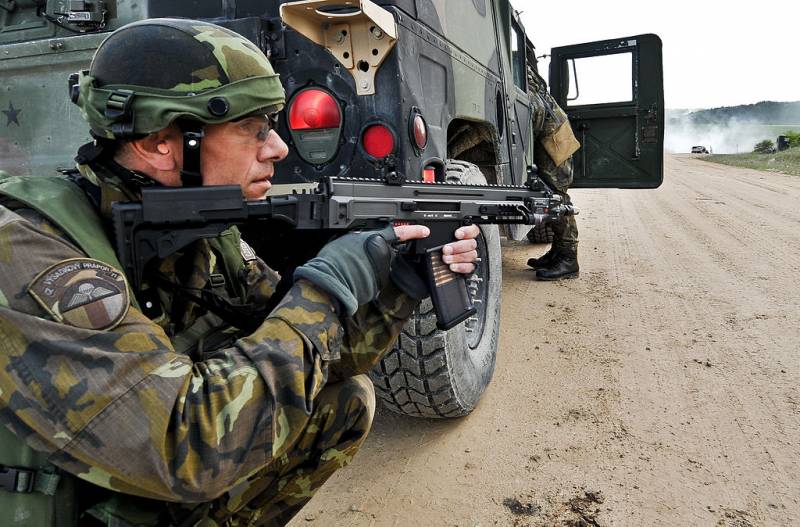 Czech parachutist with a carbine CZ 805 BREN A2

History the development of a new assault rifle model dates back to the 1977 year, when the Research and Development Center of the Brnon Machine-Building Plant adopted a program to create a new rifle called Lada S. In the 1984 year, requirements were approved for it, including the need to use a reduced cartridge 5,45 × 39 mm, and the presence of three barrels of different lengths: barrel length 382 mm, 185 mm and barrel in 577 mm, which turned the rifle into a machine gun. The resemblance to the AK-74 was obvious, with the exception of a number of differences in design, sights and fuse. At the end of the 1985 of the year, the new machine went to tests, after which in November of the 1989 of the year its serial production was to begin. But then the Velvet Revolution began and everyone was not up to the new machines. The country of 1 of January 1993 of the year was divided into the Czech Republic and Slovakia, thus ending the 74-year history of Czechoslovakia. Well, the Česká zbrojovka Uherský Brod company, which was developing its project, was privatized, and again took up other matters.

But at the end of the 1990's, the Lada project was resumed as the Czech Republic became a full member of NATO and wanted to have its own weapons under NATO cartridges. The rifle was "converted" to standard NATO ammunition 5.56 × 45 mm. Then Lada was offered for export under the name CZ 2000. The project itself received the designation "805". Two types of assault rifles were developed: Model A for intermediate cartridges, including NATO 5,56 × 45 mm, 7,62 × 39 mm and 6,8 mm Remington SPC; and model “B” under the cartridges of 7,62 × 51 mm NATO and even .300 Winchester Magnum.

Everyone had three barrels of different lengths to use the new weapon as an assault rifle, melee carbine and sniper rifle. All of them were actively promoted at international exhibitions, but the Czech army only in November 2009 of the year finally decided to announce a tender for a new automatic rifle. 27 images were presented at it, but in the end only two remained: CZ 805 and FN SCAR-L. CZ 805 won because it was a domestic development, and the tender results were published on February 1 2010 of the year. FN Herstal did not dispute this decision, and CZ 805 18 of March 2010 of the year finally joined the army. The order was 6 687 assault rifles CZ 805 BREN A1; then 1250 CZ 805 carbines BREN A2; and finally, the 397 grenade launchers CZ 805 G1 under the grenade caliber 40xNUMX mm. Moreover, they could be produced both in the underbarrel version, for mounting on a rifle, and as an individual infantryman’s weapon with a butt. All rifles were equipped with Meopta ZD-Dot sights with a "red dot". For the special forces, 46 enhanced kits were also ordered, consisting of the 1386-fold Meopta DV-Mag3 sight, the night-time 3-fold NV-3Mag sight and the DBAL-A3 laser designator.

In May 2010, the army asked for design changes before the rifle could be put into service. It was necessary to change the butt, pistol grip, and on the shutter, the number of locking protrusions to reduce from seven to six. The first delivery of the CZ 805 took place on 19 July 2011 year in the number of 505 rifles and 20 grenade launchers. The full order should have been completed in 2013. 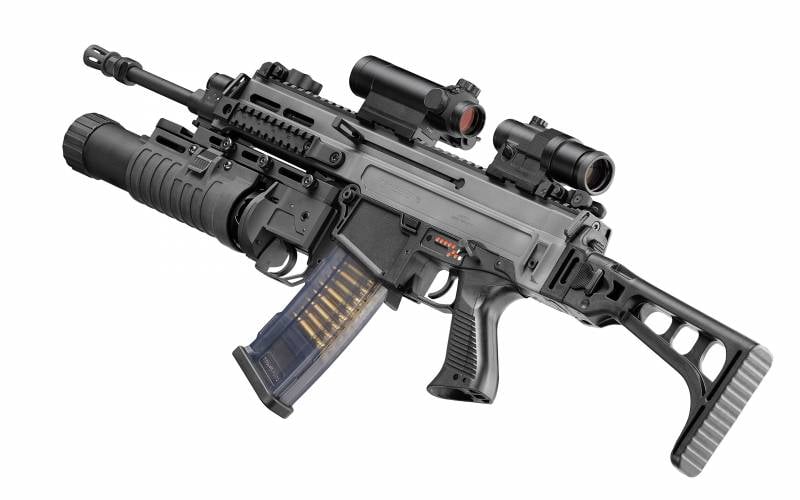 In October of the 2015 of the year, the company announced that it was ready to provide the army with a lighter model of its CZ 805 BREN rifle called the CZ BREN 2 (unofficial name CZ 806 BREN 2), which has improved ergonomics and a number of design changes that increase operational characteristics . In particular, the weight was reduced by 0,5 kg, and a number of other changes were made. In January 2016, the Czech army confirmed that the contract with CZUB for the BREN 2 was signed at the price of 2600 Czech crowns for a rifle and 800 crowns for a grenade launcher.

On the new rifle is the store’s receiver, which is a unit that can be easily replaced with blocks for NATO STANAG stores or the store from the HK G36 5,56 × 45 mm rifle. It was also possible to install NATO-100 Beta C-Mag 100 cartridge stores on it.

Today this Czech rifle exists in the following designs:

The CZ 805 BREN A1 is the standard configuration of an assault rifle chambered for the NATO cartridge 5,56 × 45 mm with a barrel length of 360 mm.

CZ 805 BREN S1 is a semi-automatic version of the A1 model, designed for the civilian market. 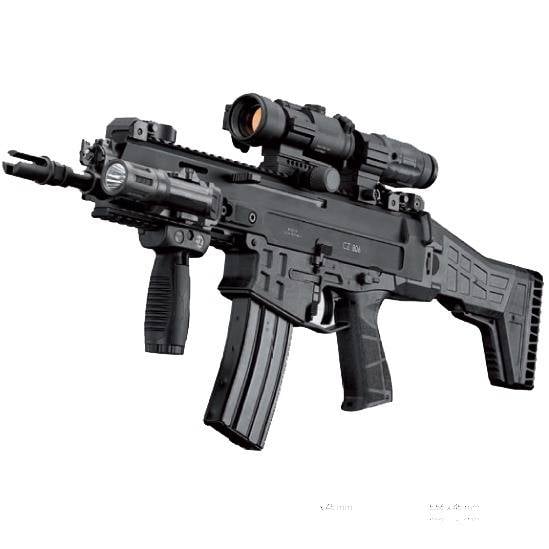 CZ BREN 2 - assault rifle, the design of which was based on the experience of fighters of special forces, which require highly functional weapons.

CZ BREN 2 - a modular multi-caliber rifle, caliber 5,56 × 45 mm and caliber 7,62 × 39 mm. The CZ BREN 2 BR uses NATO's 7,62x51 cartridges. The CZ BREN 2 caliber can be quickly changed by changing the barrel and inserting a compatible magazine insert of 5,56x45 mm size. The barrel length is from 207 mm, 280 mm to 357 mm. The firing mode selector is completely ambivalent, like other controls on this rifle. It has a simplified trigger system with three positions: “safe”, “semi-automatic” and “fully automatic”. The "cut-off by 2 shot" firing mode, which was on the CZ 805 BREN, was canceled.

The CZ 807 is a modular assault rifle under the 7,62 × 39 mm cartridge, which can be easily mounted under the 5,56 × 45 mm cartridges by changing the barrel and corresponding combat modules. 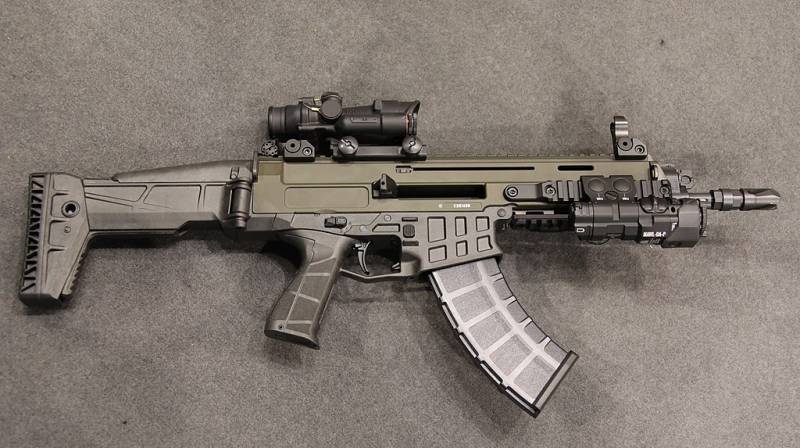 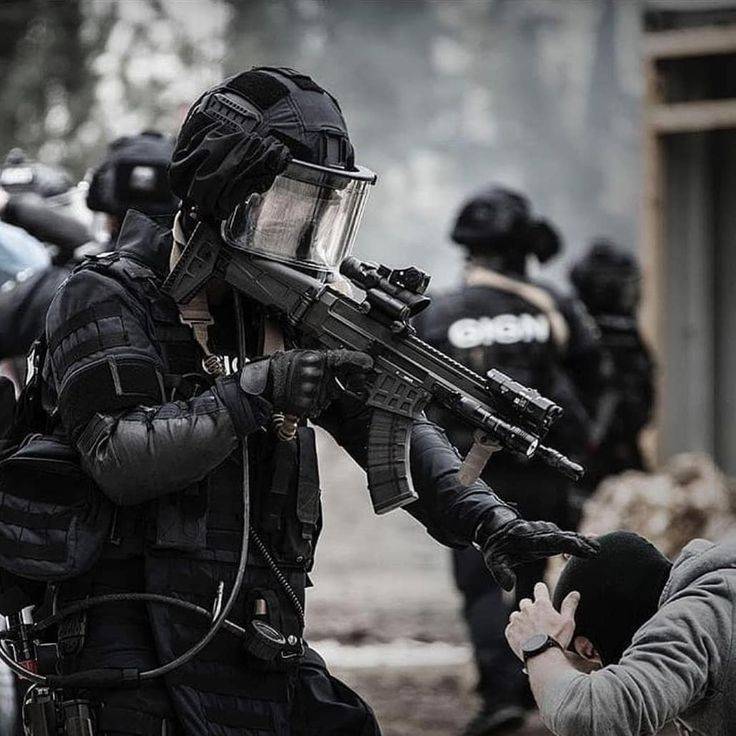