29 September 2019
36
Weapon and firms. Although Sweden has maintained its neutrality for almost 200 years, it has been able to make significant progress in the field of weapons technology and remain among the countries whose military potential is largely based on its own developments. But very often the military faces the question of which is better: to create weapons for your army on your own or to buy from someone a ready-made and high-quality model? And here everything is important, and the equipment itself, as it turns out, is far from in the very first place. Politics, economics, and even psychology and cultural traditions of one or another nation are involved in choosing such a model. And today we will talk about one of the least well-known examples of Swedish small arms, which was pretty close to becoming a standard combat rifle of the Swedish armed forces, but in the end, for a number of the above reasons, it did not become, although it was close to victory. This is an automatic rifle FFV-890C. 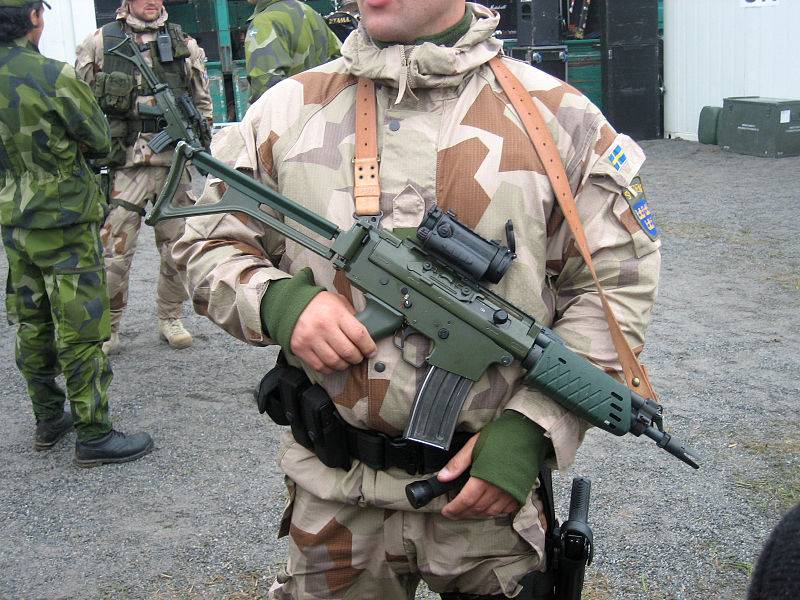 History It began in the early 1970's, when Sweden began to look for a new rifle as a replacement for the outdated AK4, which was an almost exact copy of the G3 rifle of the famous German company Heckler and Koch, introduced by the Swedish armed forces in the 1965 year. The AK4 rifle proved to be reliable and easy to manufacture - which was important for the Swedish military, who in those years preferred to buy one Draken jet plane instead of wasting money on small arms. However, the military did not like the fact that 70% of the army continues to use old Mauser rifles. Meanwhile, the USA has already adopted the M16 rifle, and the USSR AKM assault rifle. And all prompted the Swedish military to look for a new, lighter model of an automatic rifle, with a caliber smaller than the NATO’s 7,62 mm caliber. So, on AK4, the military put an end to the cross and at the same time began to prepare to adopt the AK5. But then they faced the most "terrible problem" of our time - the "choice".

In addition, it was obvious that “any rifle” was not suitable for Sweden. The fact that the Mauser rifle was adopted by the Swedish army at one time suggests once again that the Swedes are used to taking all the best. And now, let’s say so, “having indulged in this good example, we wanted ... to have an automatic rifle no worse than your old“ good ”Mauser! 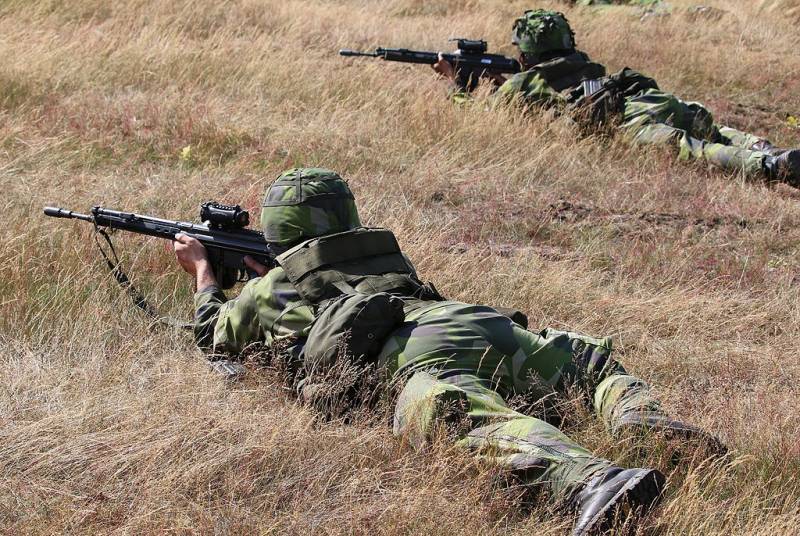 Soldiers of the Swedish National Guard train with the AK4 (photo 2015). 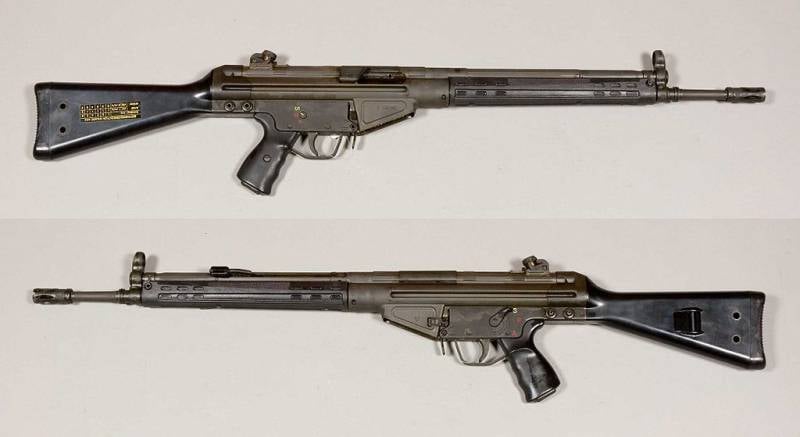 The tests of the new rifle, which was to become AK5 in the future, were quite unique in the sense that the policy on paper did not play any role in them, although, of course, it affected the decision. Nevertheless, the neutrality of Sweden allowed us to consider a number of samples of various origins, which were carried out in the 1974-1975 years. The following samples of rifles took part in the competition:

HK-33 (the main differences between the HK33 and the G3 were the smaller caliber, reduced weight and size. The automatic weapons have not undergone significant changes.
Fn-fnc
FN-CAL (was taken to participate in the contest only for the sake of comparison with FN-FNC)
Colt M16
AUG pin
Beretta M70
Armalit AR18
540 SIG
63 stoner (63A stoner was the main weapon of SEAL units during the Vietnam War)
Galil and SAR are its export option, which is why during the tests they were both declared as FFV-890.

Rifles were tested in the winter, and, as you know, winter in Sweden, like ours in Russia (!), Is not the best time of the year. Therefore, most rifles very soon dropped out of competition for technical reasons. As a result, there were only two leaders: Galil and SAR, and this, recall, was the same Galil, but only in the export version.

During the 1975-1979 years, the Galil rifle was removed from the test due to its heavy weight, but the SAR was already lightened at the local enterprise, reduced in size, and optimized for a cold climate and ... reduced production costs. Changes included the following:

The gas pipe and piston were shortened.
Enlarged store receiver, selector switch fire and trigger guard.
The size of the store has been reduced.
Barrel length reduced to 330 mm
Selector markings changed from SAR to SAP (S-Säkrad - safe; A-Automateld - automatic fire, P-Patronvis eld - single shots).
A rubber pad has been added to the back of the return spring as a buffer.
The rifle is repainted in bright green instead of black.

The upgraded FFV-890 (“Galil” / SAR) received the designation FFV-890C (designation “C” in Sweden similar to the American use of the designations “A1 / A2”) and was presented as a complete ammunition kit including, in addition to the rifle itself, a cleaning kit, ramrod , rifle grenades and a carrying strap, consisting of a Gali belt with metal hooks from Heckler and Hawk. The belt was also painted green.

Then, subsequent changes followed, in particular, the shutter handle was bent on the model of the Soviet AKM assault rifle. 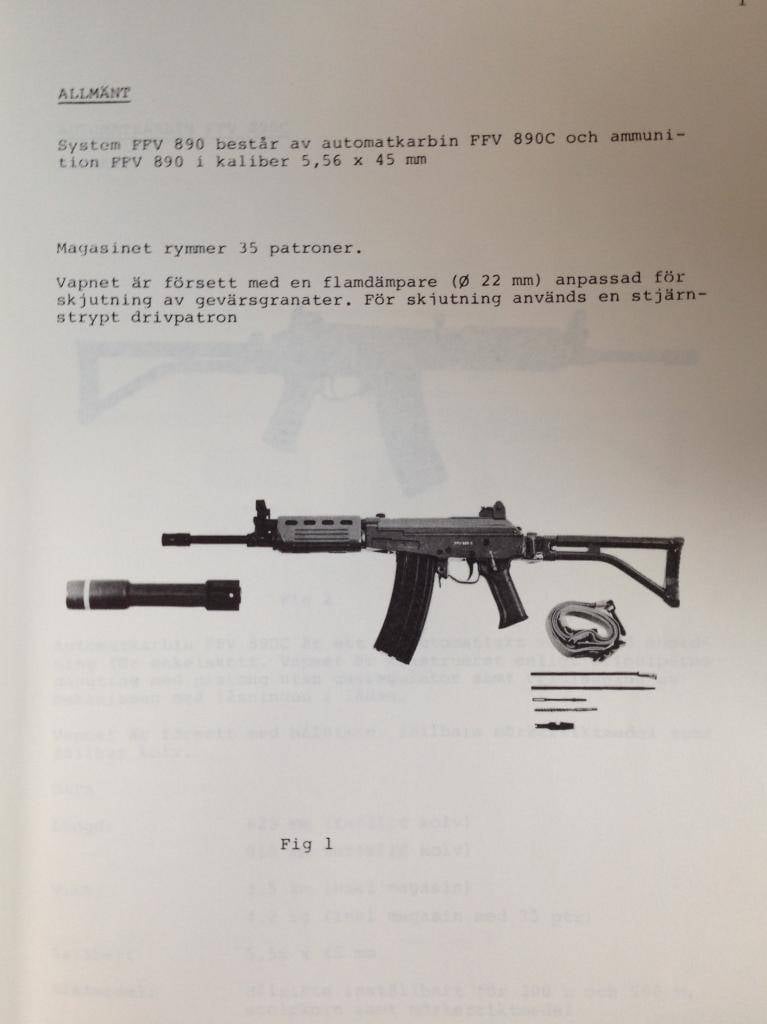 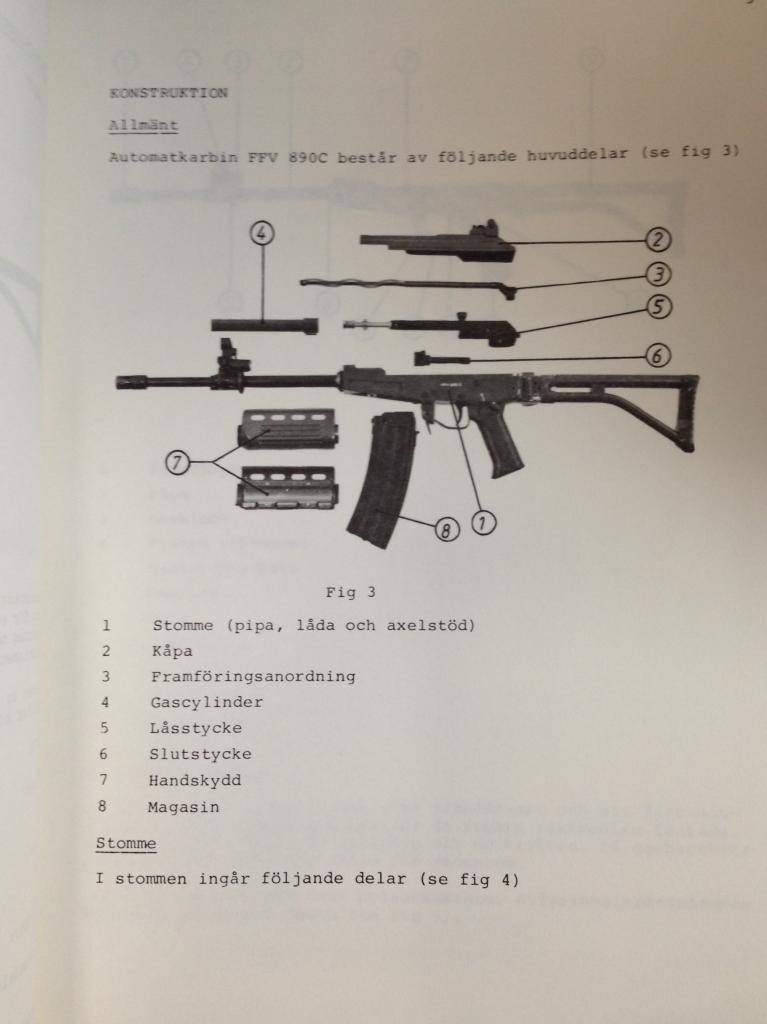 Further tests took place between the FFV-890C and the FN FNC rifle in the 1979-1980 years, and the FFV-890C was in the favorites of the competition jury. But then everything went wrong and in the end the leader was the FNC rifle - the Belgian machine gun of the weapons company Fabrique Nationale de Herstal under the low-pulse cartridge of the NATO 5,56 mm caliber. Why suddenly this happened is not known exactly. It is believed, for example, that the Government of Israel allegedly did not have ... much support among the Swedish Social Democratic government and could not approve of the rifle project developed in Israel. This is the first. Secondly, although Sweden was an officially neutral country, its leadership always believed that the Soviet Union posed a much greater threat to it than Western countries. And if so, then adopting a design derived from the AK47 assault rifle was purely psychologically impossible. 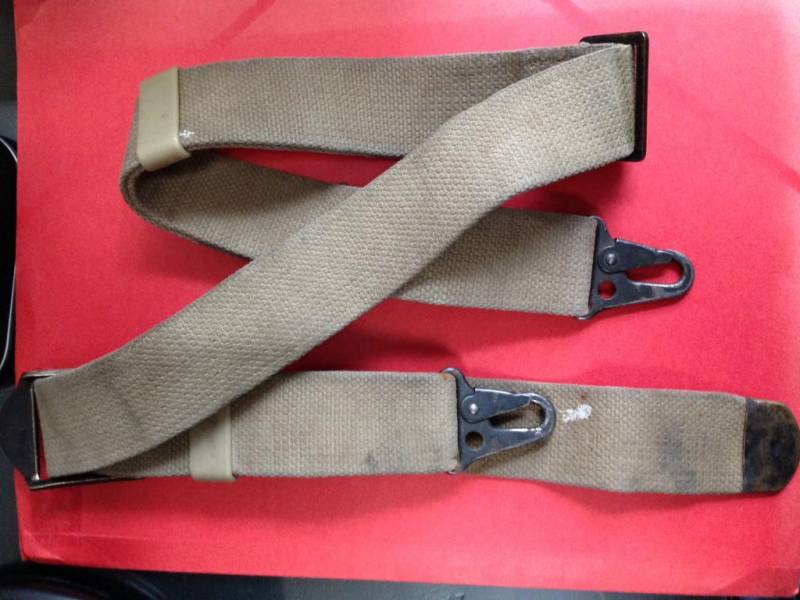 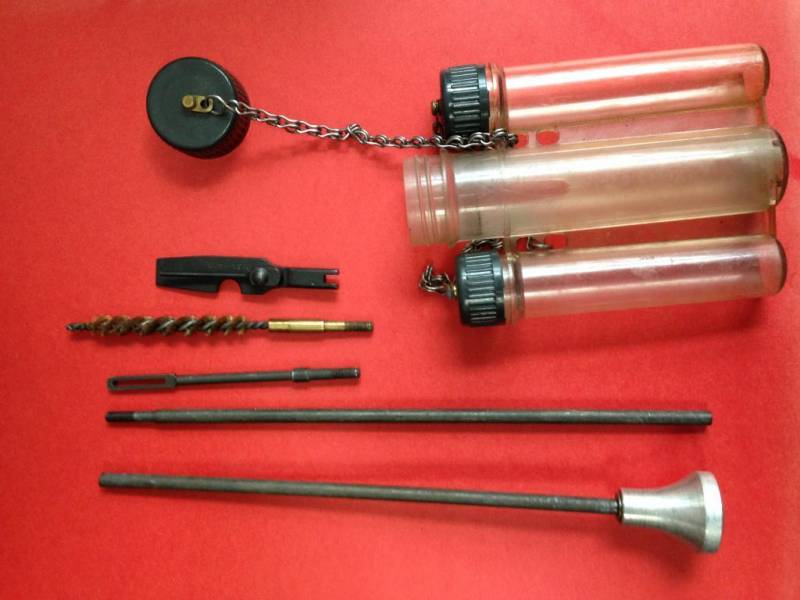 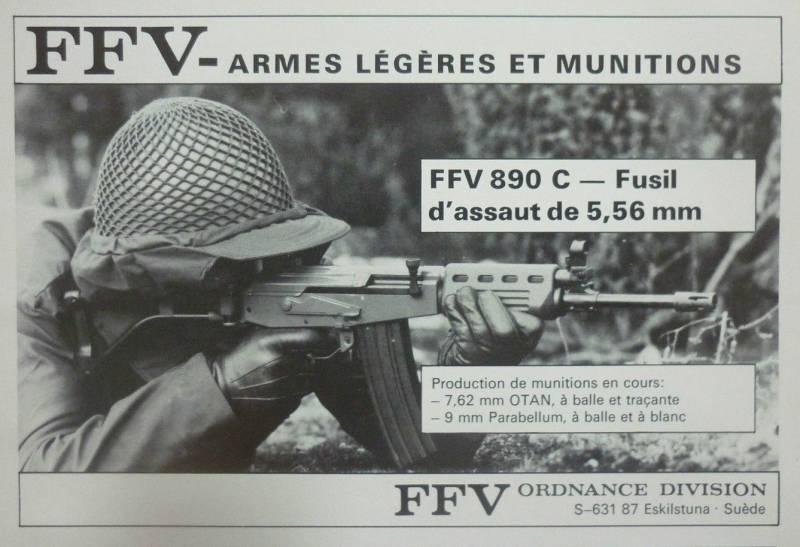 About this readiness for the FFV-890C rifle to be adopted, this information poster says best

As a result, the Swedish administration of military equipment declared the Belgian automatic machine the winner, and it was he who eventually became the AK5, which was adopted by the Swedish army in the 1985 year. In the same year, AK4 production ceased completely. 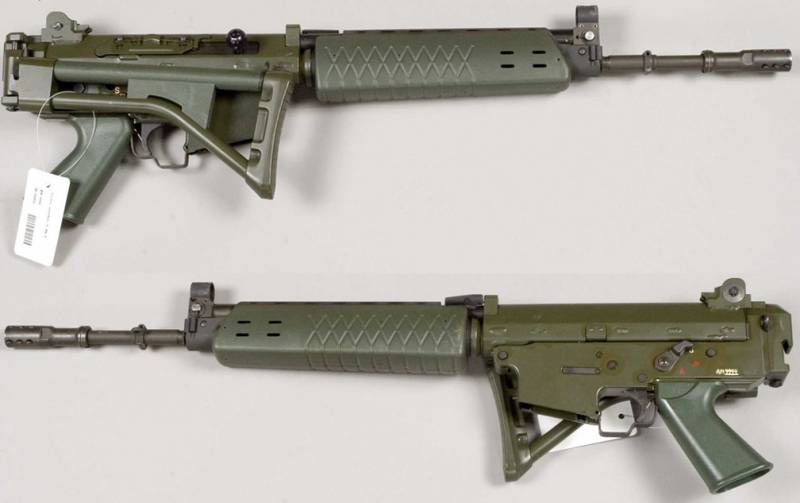 The design rights to the FFV-890C were then sold to the Finnish company Valmet, which allegedly used some of it in its own weapons. In total, less than 1000 prototype FFV-890C rifles were manufactured, some of which are still in the police arsenals to this day, and some of them have hit the civilian market. In general, the FFV-890C rifle was like no other close to being adopted, but instead of it for a number of reasons the FN-FNC got into service. Today, both the AK5 and the AK4 are still in service, with the latter in reserve units and the National Guard. 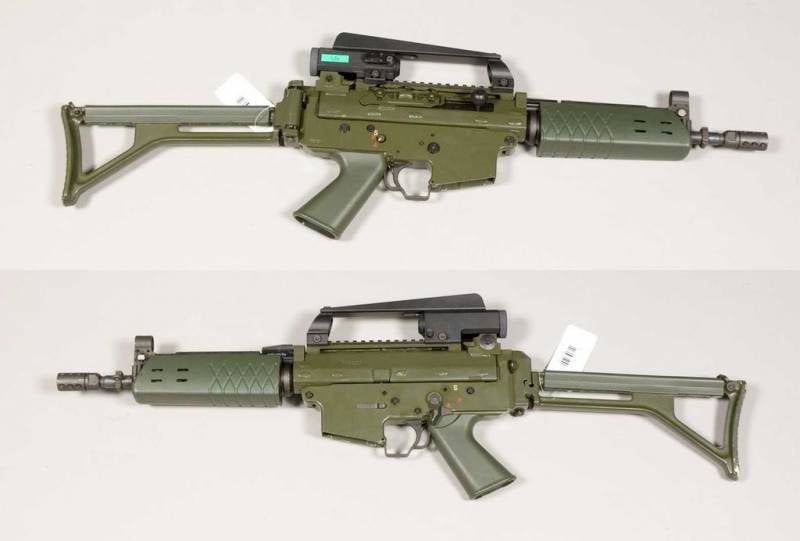 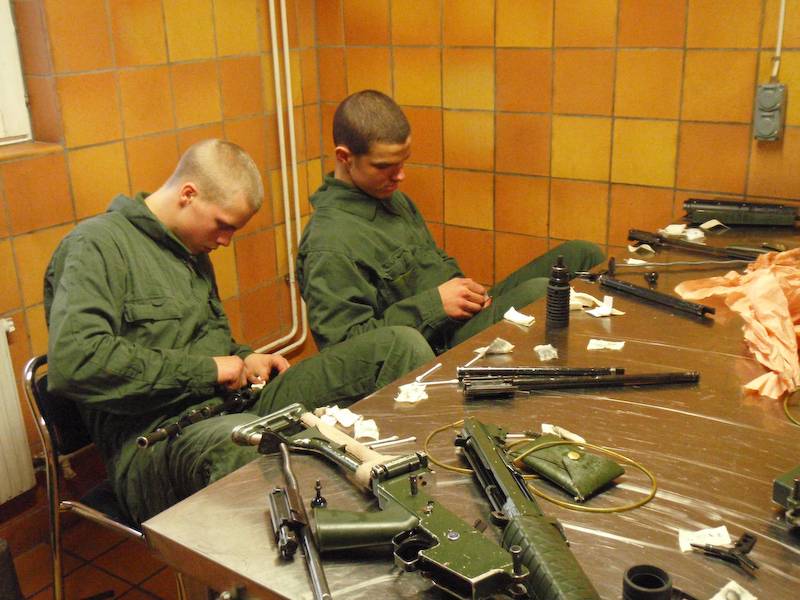 PS By the way, the whole story with the adoption of the FFV-890 is almost the best advertisement for our Kalashnikov assault rifle, isn't it?