18 September 2019
33
Weapon and firms. In the world of technology, including military, it very often happens that some new product does not have time to get on the conveyor, as there are people who see how to improve it. But nothing can be improved, since all contracts have been signed, money has been allocated, and any change in production will inevitably cause a delay in its release. Or, on the contrary, the novelty seems to satisfy everyone at first, but its operation began and it turned out that "they thought one thing, but it turned out completely different." And it also happens that years pass between the start of production and the appearance of new structural materials and technologies, but then it turns out that their use in this old model can improve its performance very significantly.

The market is all over the head!

This is where the extremes of mass mass production are avoided and the market, or rather, relatively private companies operating on it, helps. They are not connected with the government by large volumes of serial deliveries and can arbitrarily improve serial models. The military also benefits: they can always compare them with the latest products from these companies and ultimately choose the best. 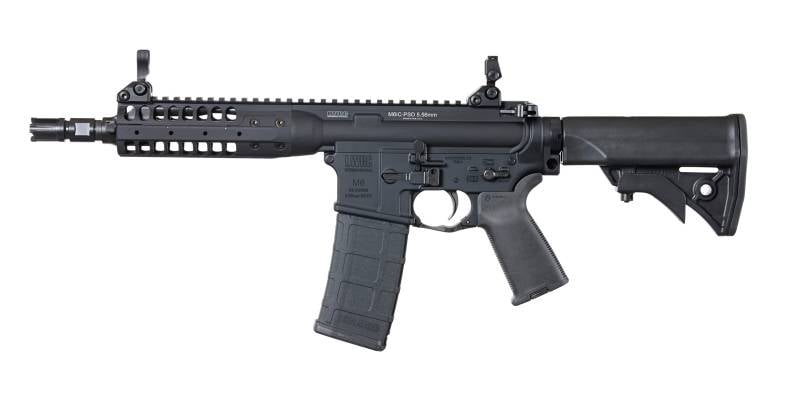 So the company LWRC International (Land Warfare Resources Corporation - the Corporation for the study of ground weapons) was founded precisely with the aim of improving the family automatic rifles AR15 / M16 / M4. Operational experience allowed us to identify all their strengths and weaknesses, and new technologies to further strengthen the first and level the second. So, as a result of the work of the company's specialists, another M6 family of gas piston rifles and carbines was created, in which the direct supply of powder gases from the barrel to the receiver and to the bolt was replaced by a much more reliable piston mechanism with a short piston stroke. 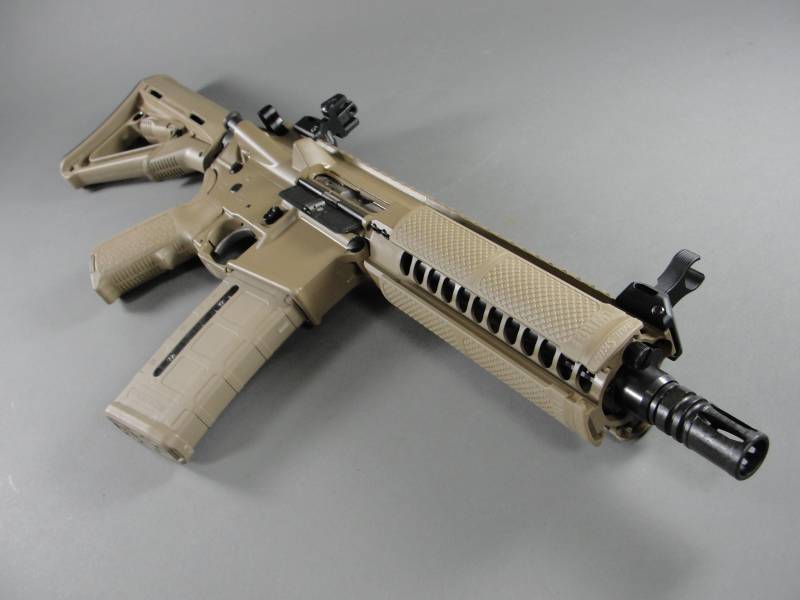 The equipment is the most modern!

The company is headquartered in Cambridge, Maryland, where there are also three production facilities with a total area of ​​more than 8300 square meters. In the workshops there are fifty modern CNC machines, there are laser cutting machines, screw cutters, a robotic welding and painting installation, and fully comply with all modern industry standards. LWRCI is also registered in the Lloyd's Quality Registrar and is fully compliant with the ISO-9001 international standard.

In order to improve the M16 / AR15 / M4 family, the company's engineers developed a patented, self-propelled, short-stroke self-regulating gas piston system. It completely eliminates the emission of hot gases saturated with carbon oxides in the receiver and eliminates their impact on the shutter. The springs that are located there are also not exposed to their burning effect, which is one of the main reasons for their failure, as well as the breakdown of various small parts. As a result, the new rifles and carbines presented by the company on the market turned out to be much more reliable than their immediate predecessors. 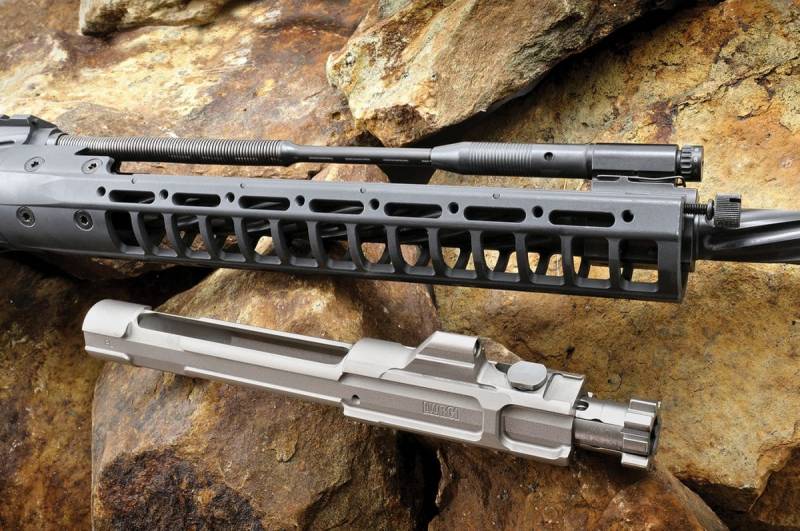 Piston pusher and bolt rifle LWRC REPR MKII. Unlike our AK, here the piston is a separate spring-loaded part. The turned out screws of fastening of the top part of forend are well visible.

Another advantage of the piston scheme is a lower recoil force, as well as a barrel toss. Surprisingly, this is achieved on the same AR-15 rifle, which is ergonomically identical to the standard model, weighs almost the same, and in which 80% of the parts are interchangeable. 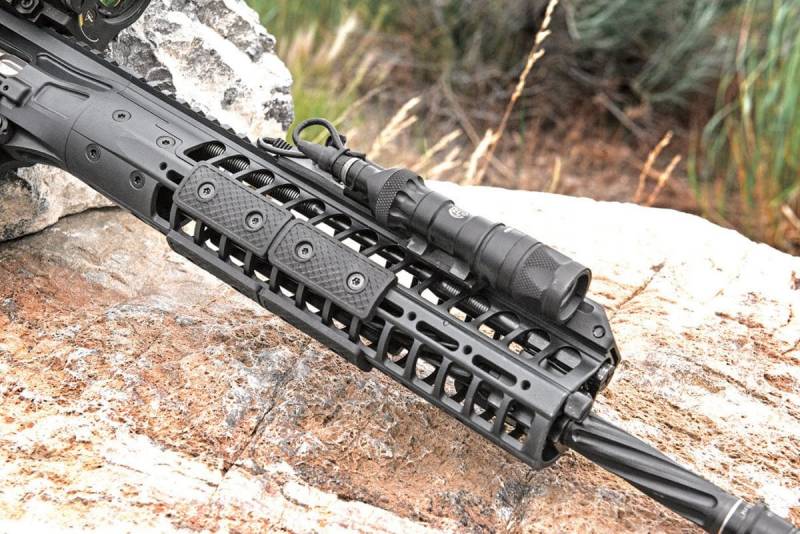 Another “invisible” novelty (or almost imperceptible) was forged trunks made of 41В45 alloy steel by cold forging and processed using NiCorr surface hardening technology. During cold forging, an oversized billet of the barrel is taken, and then it is compacted using high-pressure presses, being worn on the mandrel. This allows you to get the perfect cut inside the barrel without any traces of the tool. This technology also densifies the molecular structure of the metal, making it more dense and durable. These barrels can last significantly longer than standard barrels, without compromising accuracy or losing bullet speed. Moreover, the unusualness of many trunks of rifles of this company is immediately evident. The fact is that they are ... not smooth, but spiral-grooved, and they are 20% lighter than cylindrical of the same diameter. The increased surface area accelerates cooling, and even such trunks are certainly stronger than a regular smooth barrel. Although the company has rifles with smooth trunks. They are cheaper. By the way, NiCorr surface treatment is also advantageous in that it makes the barrel more wear-resistant, more heat-resistant and resistant to corrosion than with conventional chrome plating. Such barrels withstand up to 20 000 shots, compared to 6 000 – 10 000 shots for a standard army M4. 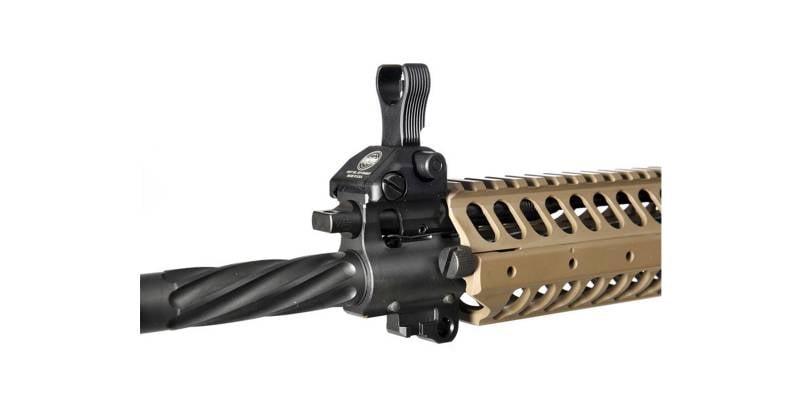 “Twisted barrel”, gas regulator and one of the screws securing the upper forearm panel

All rubbing parts of all M6 rifles now have a patented nickel coating that almost eliminates corrosion and at the same time provides constant lubrication of moving parts without the use of oil! This nickel plating is similar to that used by the US Army Research Laboratory to extend the life of existing weapons systems.

Another innovation of the company was Cerakote ceramic coating, which was developed as an alternative to traditional black anodizing. Cerakote is a type of thermally cured coating for firearms and it is undoubtedly one of the most successful and promising developments. It is applied over a standard anodized coating and provides unrivaled abrasion and corrosion resistance. All the advantages of Teflon and without sacrificing durability. This is also a self-lubricating coating, which means that these rifles can work with less grease; and this is especially valuable in the desert or in other "dusty places." Currently offered rifles in the colors of "matte dark earth" (Flat Dark Earth), "olive green" (Olive Drab), "local brown" (Patriot Brown). True, all Cerakote coated rifles are more expensive than the standard 150 black ones, but it's worth it. 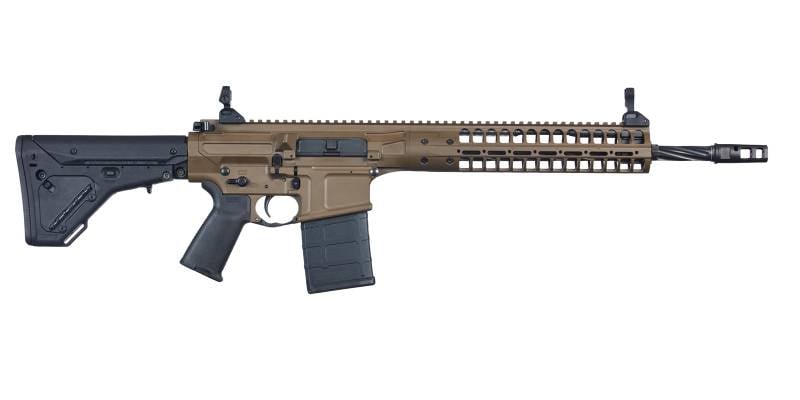 Well, now let's get acquainted with individual samples of weapons of this company. 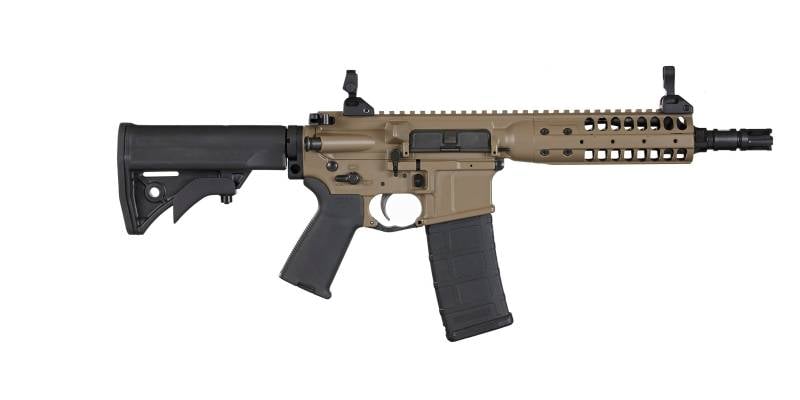 The first in a row will be a short IC-PSD assault rifle, which combines the firepower of a rifle cartridge and the dimensions more characteristic of submachine guns. Due to its size and light weight, it is easy to carry and use in a wide variety of conditions. It has an 177-mm Picatinny rail, which allows the shooter to mount a variety of devices on his weapon. Access to the gas piston system is quite simple: you just need to loosen the two screws on the forend.

Barrel length 210-mm. The shutter frame and the shutter itself are nickel-boron coated, which gives unprecedented wear resistance, corrosion resistance and ... constant lubrication. 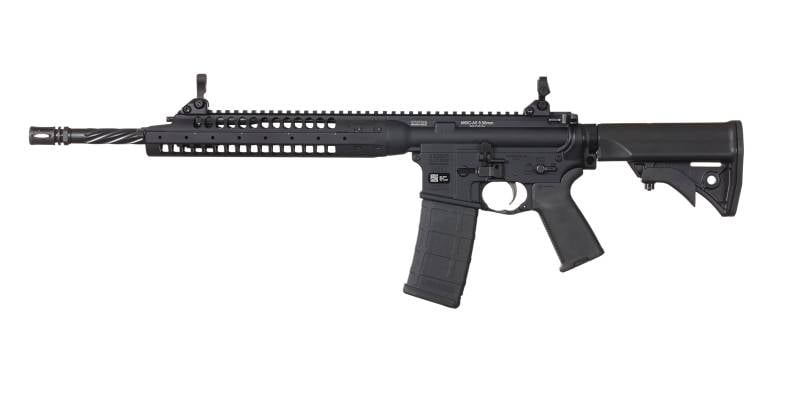 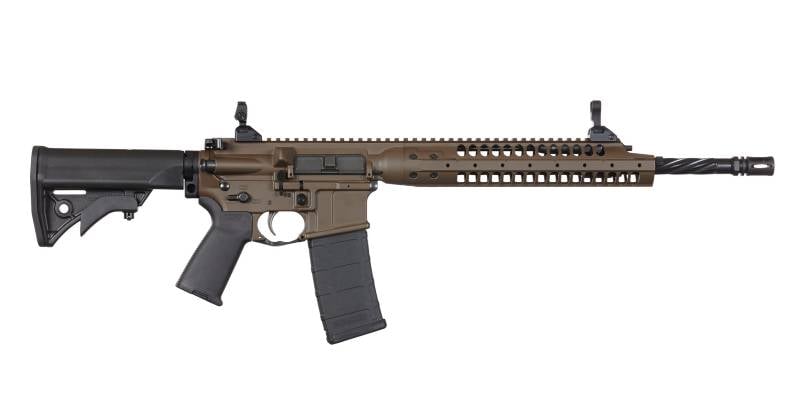 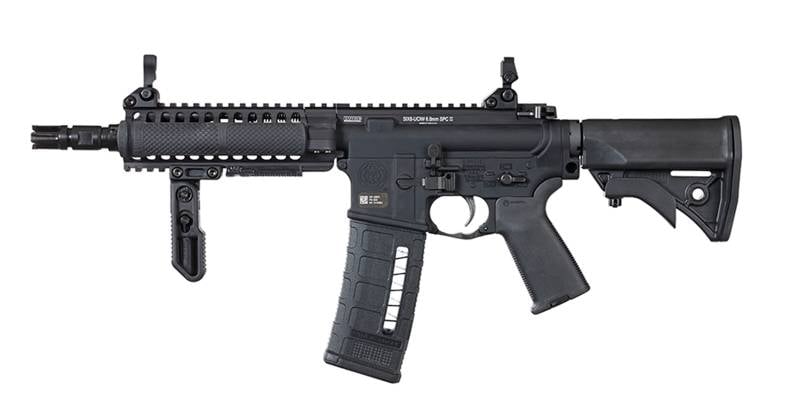 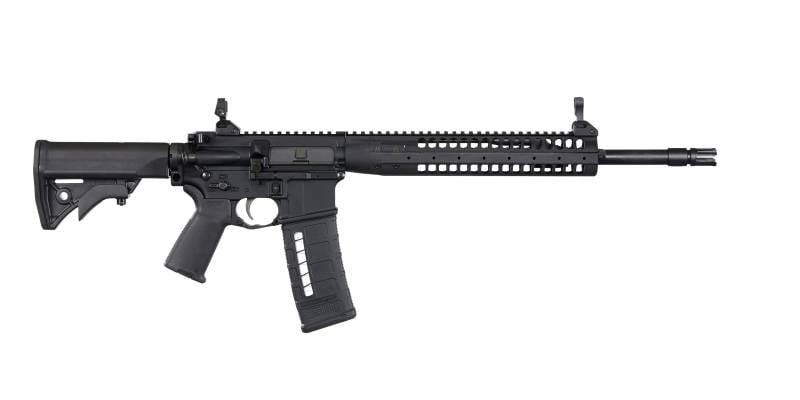 SIX8-SPR is a special-purpose rifle for 6,8 x 43 mm Remington SPC II cartridges. The cartridge has more power than 5,56-mm, but lighter than 7,62-mm. The rifle uses alloys that are most often used in the aerospace industry, which increases its quality and ... price! The window for ejecting cartridges is enlarged, and so it looks practically no different from weapons of standard calibers. Extractor spring also reinforced

The same rifle, but under the standard NATO cartridge 5,56-mm - LWRC IC SPR 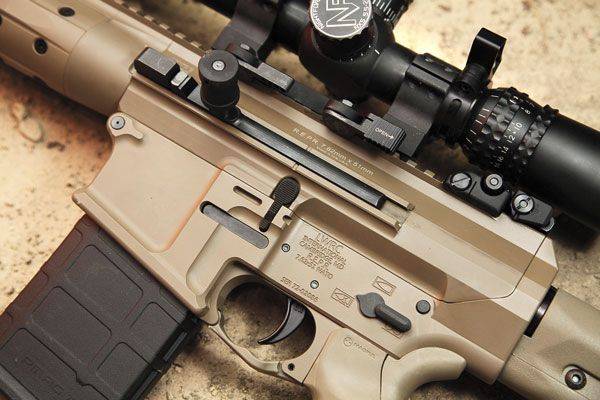 Sniper rifle LWRC REPR-308-AR15-6. Interestingly, in its butt there is a capacity for electric batteries needed to power various attachments 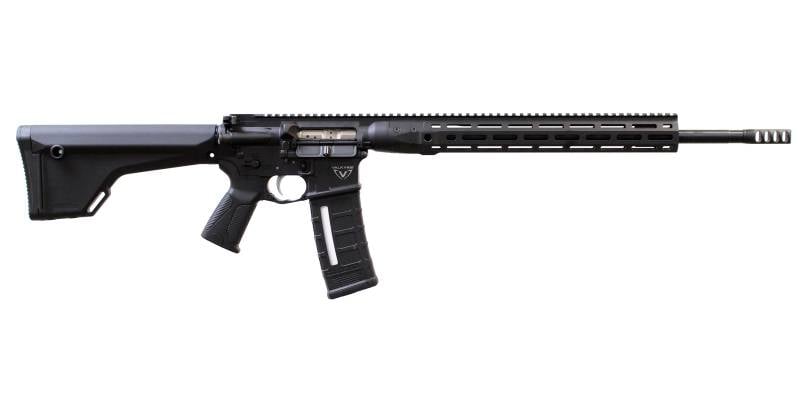 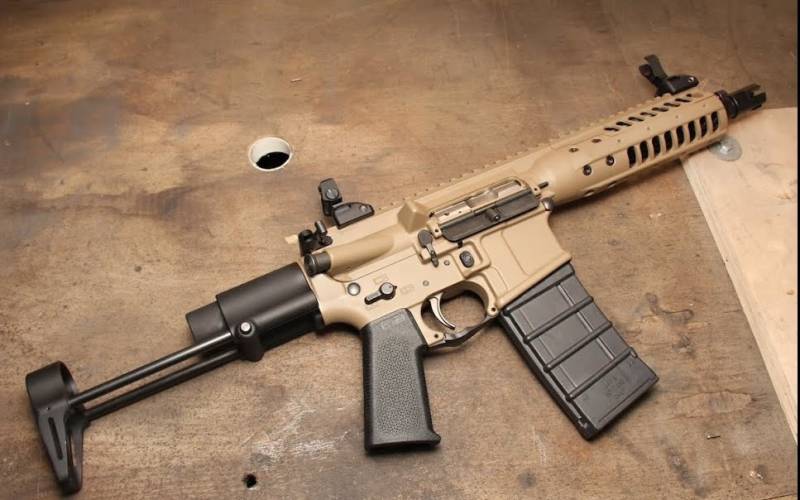 It’s already very compact ... the “carbine” of the 6,8-mm caliber, in which all other qualities were sacrificed for compactness, even the butt. However, with the AR-15 system with the butt, you won’t especially run away. The return spring tube, which is its base, will still stick out back! 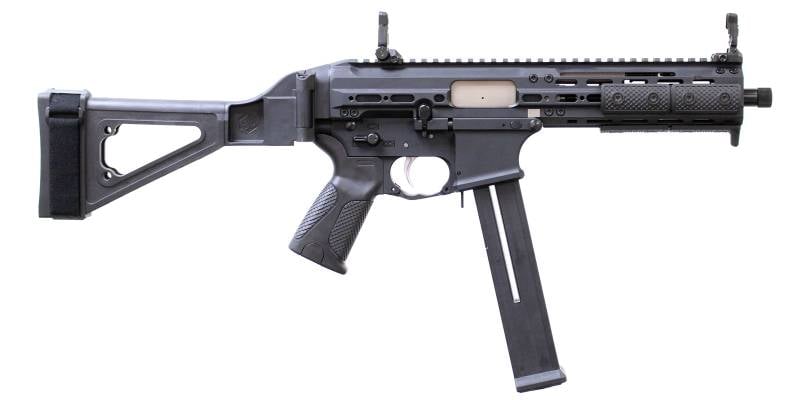 But the company also has a real submachine gun chambered for .45 ACP. His stock develops to the side, which is more convenient than for specimens leading their pedigree directly from AR-15. Weight without cartridges total 1,5 kg. Barrel made of chrome nickel steel, length 220 mm 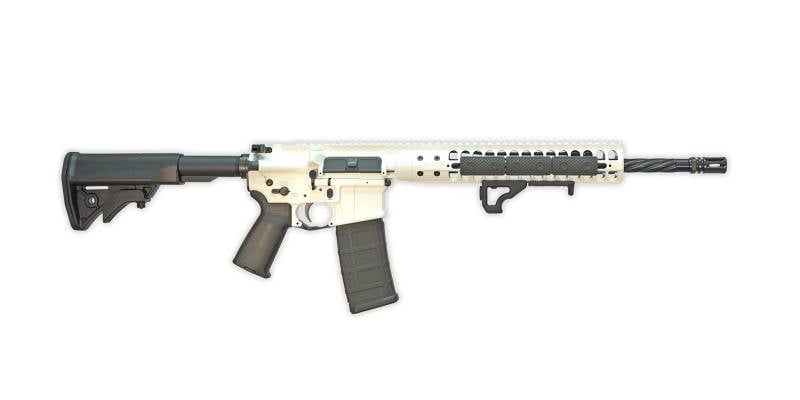 By the way, if you wish, they can make a rifle even with a pure white coating: any whim for your money!

Author:
Vyacheslav Shpakovsky
Articles from this series:
CZ 805 A1 / A2. No worse than the good old "Bren"
AR-15 of the Schmeisser company