"Arches" from Savage, or the New Generation of Modern Sports Rifles

October 27 2019
31
Weapon and firms. Every person, or rather, a man, is a little killer in his heart. This is in his genes, because it was a man who for many hundreds of thousands of years killed a wide variety of animals and fed them his life partner and her offspring. He fed well - multiplied well. He fed poorly ... and there was someone who could do it better and deprived the loser of the opportunity to transmit his genes. 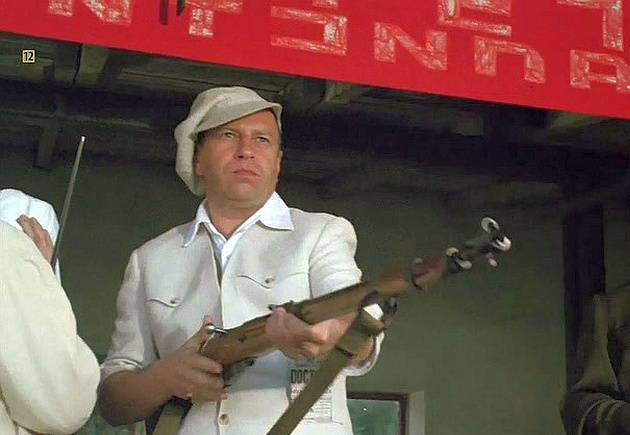 Today, the issue of killing animals for food is not on the agenda. But there are still some “killer genes” inside men that remain, even if their percentage is still not amenable to accounting. That is why some males still go hunting (not to mention the fact that there are those who voluntarily go to the “Foreign Legion” and “Blackwater”!), While others ... just shoot at the target! It’s a rather stupid thing, in my opinion, if you are not going to make money on it, even more than that - it’s just an extra transfer of money and time, but as they say, they don’t argue about tastes. On the other hand, if it is possible to shoot, then why not shoot?

If you have the desire and the ability to shoot, it means you have the opportunity to choose weapons for this. And the no more people, the more of their larger samples they want to choose. Emphasize, so to speak, your individuality with everything you can: the quality of the weapon, and its appearance, and your result, which is often directly connected with all this. And it is not surprising that in the West (by the way, today, too), a large number of companies specialize in producing both hunting and purely sports (although who said that sports weapons do not kill ?!) weapons for targeted shooting.

AR10 of the Armalit company. A feature of the rifle was the direct removal of gases into the receiver, the shutter handle located above the handle for carrying, and a metal, later plastic forend. Cartridges 7.62 × 51mm NATO

Some companies produce weapons for the army and the police, and some in these conditions - for fans who are firing for shooting and ... the same police who want something special. One of these companies turned out to be the American company Savage Arms, which we told you about in two previous materials of this cycle. Her weapon was never able to break into the arsenals of the US Army, but on the American market of hunting and sporting weapons, it is presented with dignity. Each year, this company produces more and more new models of both slide-action rifles and semi-automatic rifles based on such well-known designs of Eugene Stoner as the AR-10 and AR-15.

At one time, these rifles weren’t scolded by us, except that only lazy. Well, actually, like the bourgeois lifestyle itself. But time passed, “the passions subsided”, the experience of their use was gained and it turned out that it was AR-10 and AR-15, made of modern materials, with a modern coating, with modern care products that give excellent results when firing and, you can say , and - this is unlikely to be an exaggeration; they are almost the ideal weapon for sports shooting. 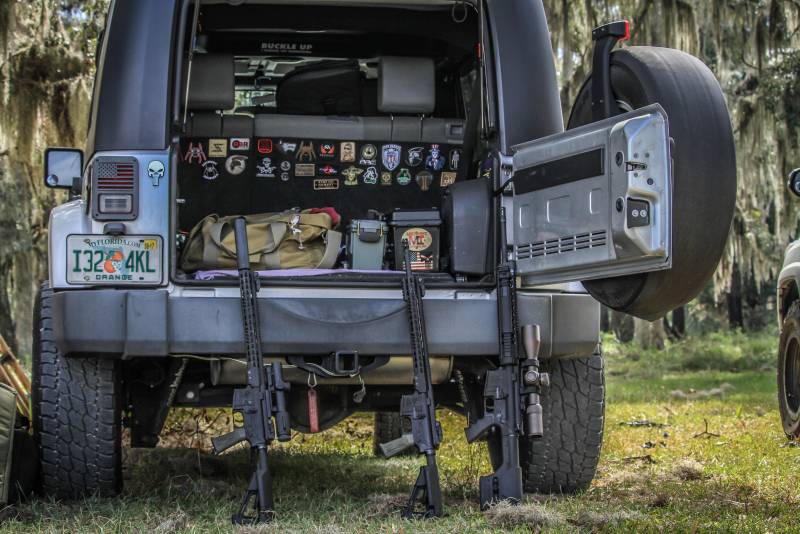 In a free country, a free citizen can have many weapons. And what? I want - that means I have the right! About that and in the constitution we have written!

This company itself writes today: “There are excellent news for serious shooters who want more from their modern sporting rifles. The new line of new generation semiautomatic devices, produced by the legendary American gunsmith, raises the popular AR platform to a new height, offering higher performance, an expanded choice of calibers and a modern design, as well as a full set of various updates to standard functions. The four-rifle family, known as the MSR 10 and MSR 15 (abbreviated as “Modern Sporting Rifles” - translates as “Modern Sporting Rifles”, but the company translates it as “Modern Savage Rifle”), includes a pair of powerful MSR 10 rifles, which turn the dreams of shooters into an easy game and provide tactical dominance at all long range shots. Two models of the MSR 15 line provide precision and firepower that mass-produced M4 clones cannot achieve with standard specifications. Savage Arms decided to enter the modern market of sports rifles not on a whim, and not overnight. The company has been manufacturing firearms for over a century. Arrows around the world recognize the name of this brand as a synonym for craftsmanship, providing impeccable accuracy and unmatched performance even in extreme shooting conditions. Savage is best known for its extensive collection of specially designed slide-action rifles that offer shooters of all ages and skills as unmistakable options for hunting, shooting competitions, and just shooting for fun. But few consumers know that Savage for many years also created high-quality trunks for other manufacturers, honing this process to the level of art.

About 10 of millions of modern sporting rifles are already in the hands of American gun owners, so why not give their owners the opportunity to purchase something new and better for themselves. After communicating with thousands of shooters online and in person at training grounds across the continent, the company already knew exactly where and what it should strive for. Therefore, "Savage" settled on an expanded selection of calibers and an increase in user functions. Experienced engineers of the company in the development of new rifles actively collaborated with manufacturers of ammunition, which allowed us to optimize each new development for their specific cartridge. Today the company is launching an attack on the AR brand rifle market and is convinced that its latest developments are excellent examples in the family of all other “arches”. Meet the new generation of modern sporting rifles: MSR 10 Hunter (“Hunter”) and Long Range (“Long Range”) (AR-10 platform) and MSR 15 Recon (“Scout”) and Patrol (“Patrol”) (AR platform -15). Together they raise the bar in modern sports weapons even higher, and for sure serious shooters everywhere will amaze their goals from them. ”

But with what does the AR10 / AR15 system bribe both manufacturers and shooters? Well, with the manufacturers, everything is clear. There is a license that you can freely buy. Recently, for example, the Russian company ORSIS announced the release of AR15 and will now supply the market with semi-automatic rifles ORSIS-AR15J. Moreover, before they were assembled from components coming from the United States. Now she will produce them from the details of her own production.

But so are many other firms. They buy all the technical documentation, all the data on steel grades, tolerances, in a word - “a rifle on paper from and to”. And they begin to produce another clone. But ... this is where the fun begins. The license does not prohibit changing the material, the shape of the handle, the barrel casing (the receiver, as it is now called in English instructions). An absolute requirement is the interchangeability of parts, but only for the same cartridge and caliber. You can, however, change the caliber, which will require the processing of many parts, but this is not prohibited by license. So having licenses for the basic caliber 7,62-mm (AR10) and 5,56-mm (AR15), you can easily issue them under the cartridges of the caliber 7, 8,6-mm, 9 and 11,45-mm. The main thing is that this cartridge of your choice be produced, be known in the market and have certification.

And then again, modern achievements come into play. We install a freely hung barrel on our rifle, which is a fashion trend today, put an adjustable butt on 5-7 positions, a Picatinny rail for the entire length of the receiver and a receiver (“from front to front”, then a couple of “picnets” on the sides and one on the lower side and ... here we have a “new”, excellent tactical rifle for ... hunting large animals, but we can also make different barrels for different cartridges and thereby expand the “product line.” Coverage ... again, maybe different: matte black, "dark "blah", "sand", "alpini" - that is, in principle, of any color and for every taste. But, most importantly, it’s a convenient design. The rifle is simple. There are few details in it - in fact there are only two - a bolt, shutter frame and return spring.It is easy to clean, in a word for shooters-athletes and hunters this is the “that.”

But a lot in creating a new market model of weapons depends on the cartridge ...

There was, for example, the .338 Lapua Magnum cartridge (8,6 × 70 mm) - specially designed for sniper shooting at long distances and this immediately gave a chance to appear and the rifle just for this cartridge. They created it to conduct accurate fire at a “growth target” at a distance of up to 1800 m, that is, it requires a rifle capable of firing further than the one that uses .300 Winchester Magnum cartridges (7,62 × 67 mm), but lighter than firing cartridges .50 BMG (12,7 × 99 mm). The optimal range of the .338 Lapua Magnum cartridge is 1500 m. That is, this cartridge occupies a niche between sniper cartridges such as .300 Win.Mag. and .408 Cheyenne Tactical (10,3 × 77 mm). Well, of course, he needs his own rifle made just for him. 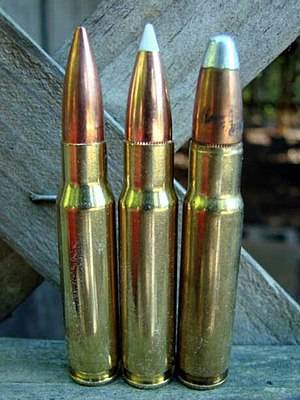 In 2006, the .338 Federal cartridge (8,6-mm caliber) was created, which soon earned the reputation of a universal cartridge, which, of course, was convenient for many shooters, since they received the destructive power of the “magnum” bullet, but without the recoil of “magnum” and ... who doesn’t like it? And, of course, the Savage MSR 10 Hunter rifle soon appeared under it. Weapons, both with a longitudinally sliding rotary bolt and self-loading for this cartridge, are today produced by a number of well-known weapons companies, for example, Tikka, Sako, Ruger Firearms, Savage Arms, Wilson Combat, Arma Lite, DPMS Panther Arms. Moreover, merely listing them indicates a huge demand for weapons in the United States. There are so many companies, and there is enough for everyone ... "place in the sun"! 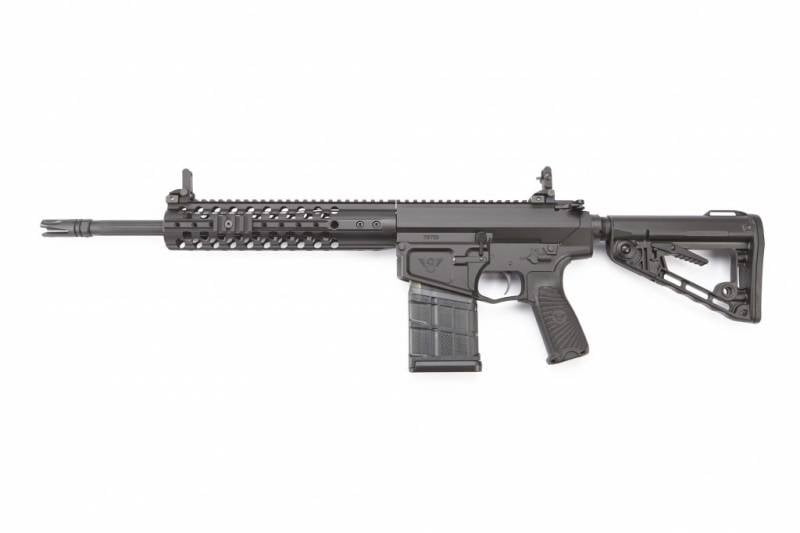 Wilson Combat .338 Federal tactical carbine with black coating. It can only be distinguished from a Savage Arms carbine by brand only 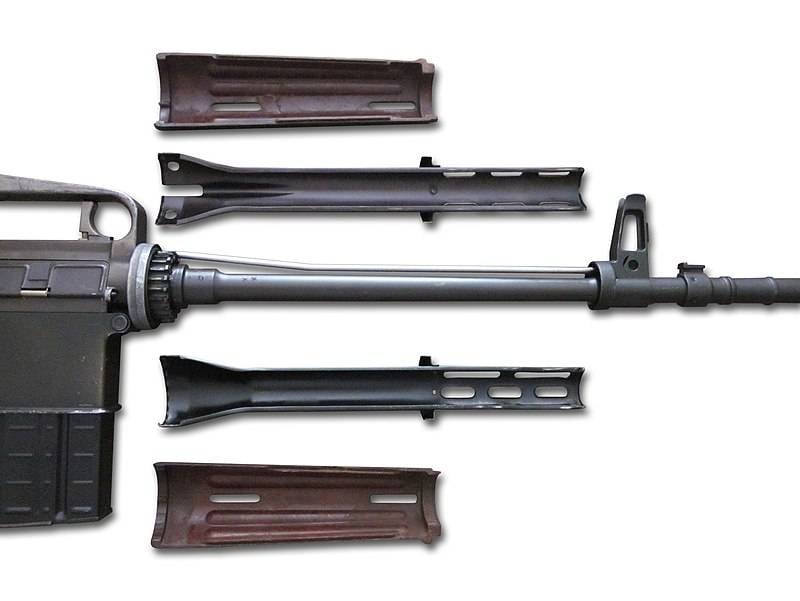 So today the company Sevij works with the legacy of Eugene Stoner and, of course, not only she, but now also our Russian manufacturer ORSIS. 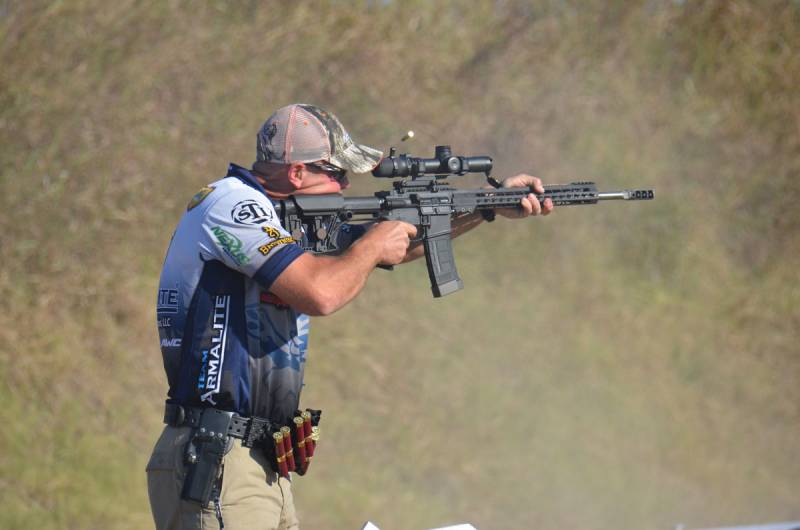 Now it’s customary to shoot from such rifles like this ...

These are today the principles that guide modern manufacturers of “arches”. Well, specifically, we will get acquainted with the samples of Savage products under the MSR brand next time.

Ctrl Enter
Noticed oshЫbku Highlight text and press. Ctrl + Enter
We are
Savage Very nice 1907 pistol of the yearWhat should be a modern sniper (part of 1)
Military Reviewin Yandex News
Military Reviewin Google News
31 comment
Information
Dear reader, to leave comments on the publication, you must sign in.