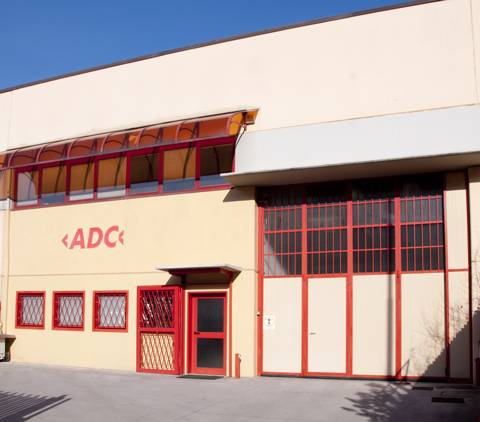 This is where the ADC rifles are made

And this is the case not only in the USA, but also, for example, in Italy, where the experienced craftsman Roberto Duller and his son Christian created a classic Italian small business where the owners themselves work not only with their heads, but also with their hands. Moreover, they do not need to do rifles from beginning to end. There is, say, a company that makes good trunks. So we will order her a batch of trunks of our size and under us selected cartridges. We can mill the receiver ourselves, well, we will mill it ourselves and indicate this in the brochure as a virtue. And the simplest thing is to put a fore-end type of forend on our “arch” so that everyone has it “like that”, but here we have “kind of business”. And then the sales manager’s business is to persuade customers, starting with wholesalers and ending with retail customers, that they should buy new “arches” from them. That they have both a cool assortment and a finish, and most importantly - the design is literally licked, so it’s their rifle at the shooting range that will show the best result. Naturally, an assortment line is needed, because people are so arranged that when their eyes run wide, selling them something new becomes much easier.

This is also the case with ADC Armi Dallera Custom from Brescia, established in 1987. They made several samples of rifles that differ in purpose, barrel length, design of a flame arrester, ventilation slots of the forend, and also milled receivers - upper and lower, and the trigger guard on the lower is made with it at the same time. There is also no shutter rammer on the right, and the reload handle has a larger size. Also rifles vary in color, there are red, blue, beige - in a word, beauty! You will go to the shooting range, and immediately everyone will notice you. And ADC also has a beautiful emblem - an arrowhead cut in half, which, firstly, indicates that there are two partners, and secondly, the high quality of products with this brand!

Weapon and firms. Today, in the West, any citizen who has his own money, or who has taken it on credit, can open his own production of automatic weapons and begin selling it. The result of this situation was the appearance on the arms market of literally a mass of small companies, often representing a family business, which produce what? Well, of course, the American AR-15 rifle under license, since buying the latter costs nothing, or rather, it costs only money. As a rule, they release them for sports shooting and hunting, since both types of leisure in the West are very popular. Parts of the “arches” are produced today by dozens of companies, and there are also tuning studios in which there are countless options at all, so it’s impossible to count all types of produced “arches” today. 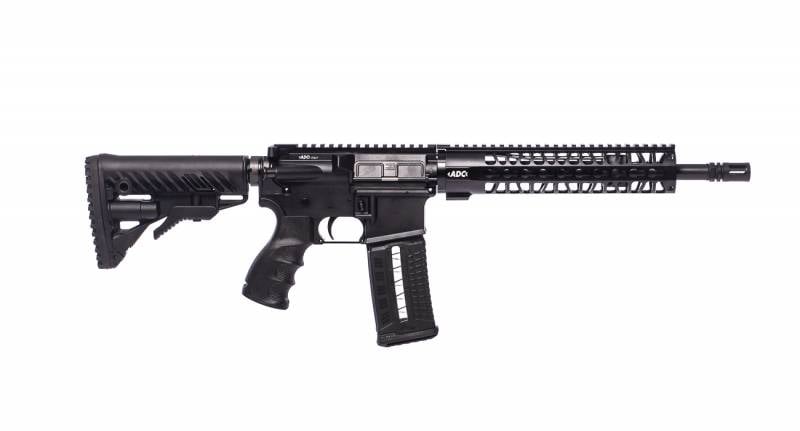 M5 BASIC
At first they were engaged in an upgrade, then they began to make individual parts, and in 2000 they switched to the production of their own products. Today, the company produces several series of rifles that differ in purpose, cost and various other indicators, since the main thing for the market is to provide a choice. That's exactly the same, but "without wings and with pearl buttons, not in front, but in the back!"

The M5 series is a development to expand the offer in the competitive arms market. This is an entry-level shooter product, hence the low cost of the series. That is, this is a weapon for beginners. Well, when a person got involved, fell in love with the brand, he was already offered new models, offered to participate in competitive programs, bonuses, in a word, all the tricks of the modern market, if only to make a regular customer out of a person. There are two versions of rifles under the names BASIC and PLUS, with all the difference in the latter in barrel length. The company does not sell them itself, but it does have a dealer company in Italy, which distributes these rifles. 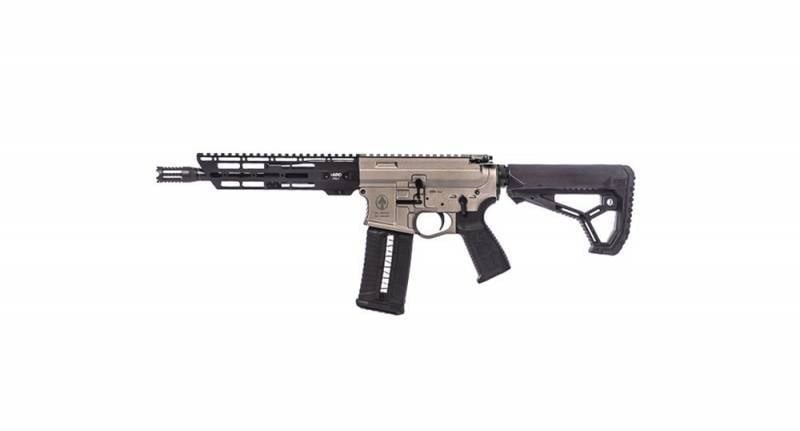 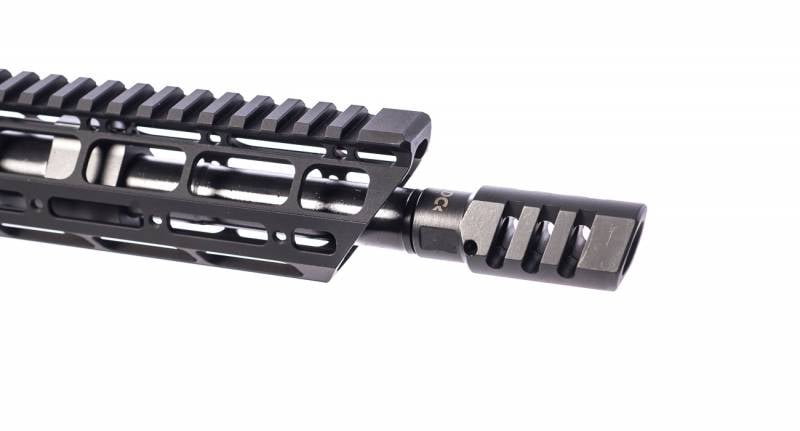 Muzzle brake compensator on one of the "Spartans" 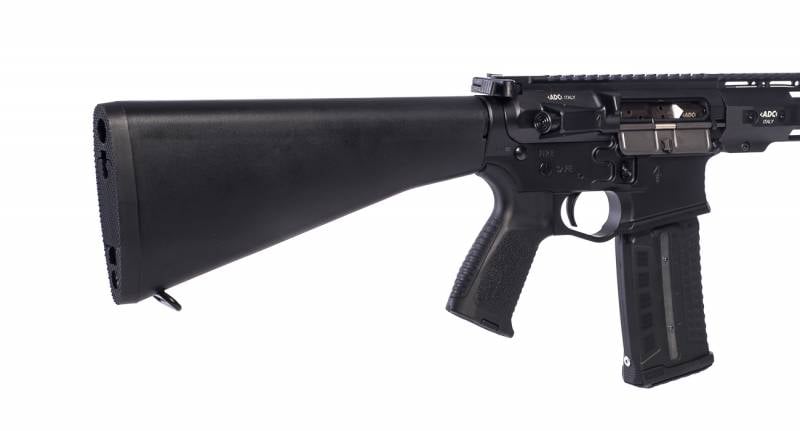 Butt of one of the SPARTAN series rifles 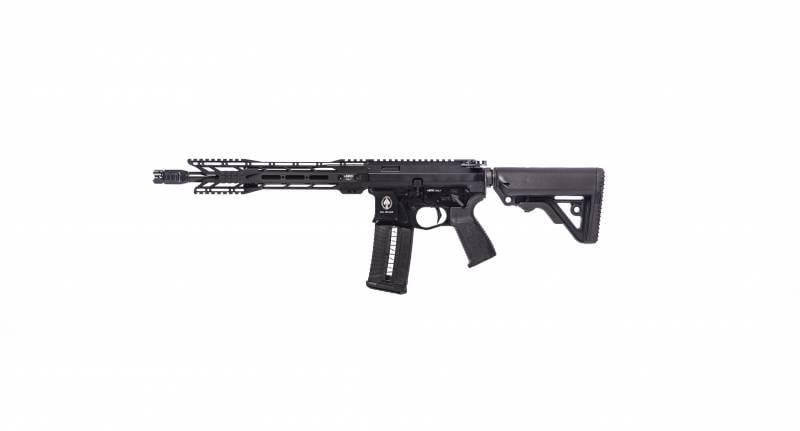 And so it looks all in its entirety! Nothing extra. Because and SPARTAN 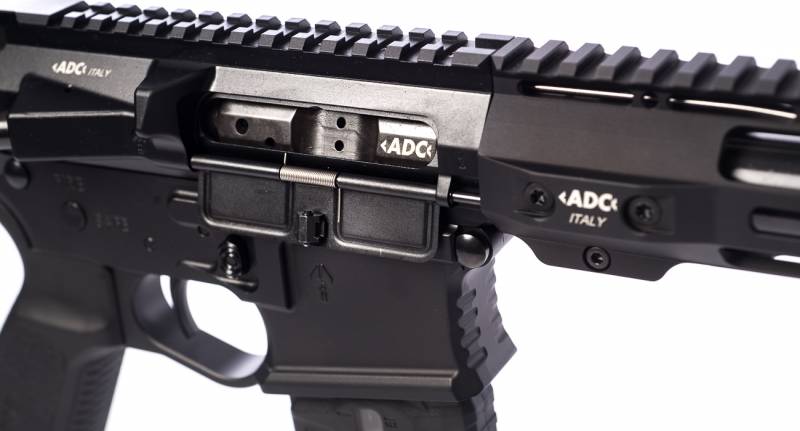 View of the receiver of the SPARTAN rifle on the right
Then comes the SPARTAN series, which was originally conceived as “BASIC” but later evolved into a standalone version. The upper and lower receivers of this "arch" are fully compatible with the base model, but the quality of the coating has been improved, and a number of design changes have been made to the design, which allows with good reason to write "Made in Italy". Rifles are available in two calibers: .223 Rem and .300. However, an optional 9,5mm rifle is also available with greater durability compared to other similar models, and which is designed to use the 1912 .375 Holland & Holland Magnum cartridges for hunting big African game. 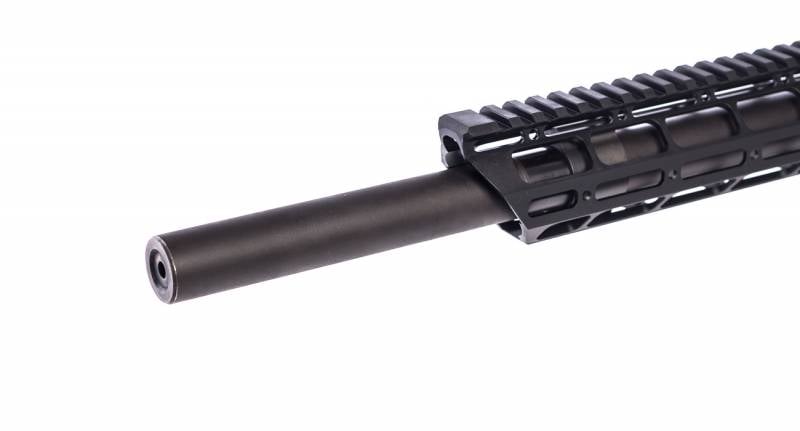 CUSTOM barrel - “high precision” option
The CUSTOM series was designed for experienced shooters. In fact, this is just a “platform”, which the shooter himself “personifies” by selecting a wide variety of details according to his exacting taste. The receivers are made of an all-metal blank on a CNC machine, a lot of attention is paid to the design, in a word - the price is oh, but it's all yours! There are also two calibers: .223 Rem and .300. What kind of “design” can there be? But what - an inquiring mind will always find that it is possible to improve, at least a little! For example, a proprietary ADC trigger box is milled with a trigger guard and a hole for the right shutter-release button. For sports weapons, this is fundamentally important. The front wall of the store’s receiver is profiled, that is, it has a notch that helps to more securely hold the weapon with a short grip. 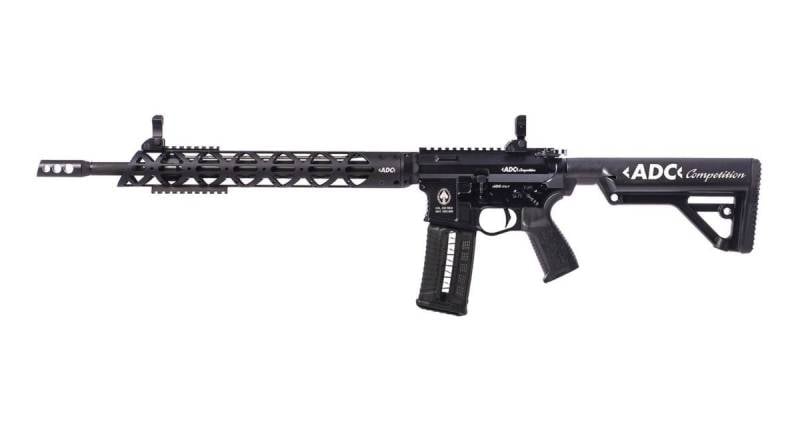 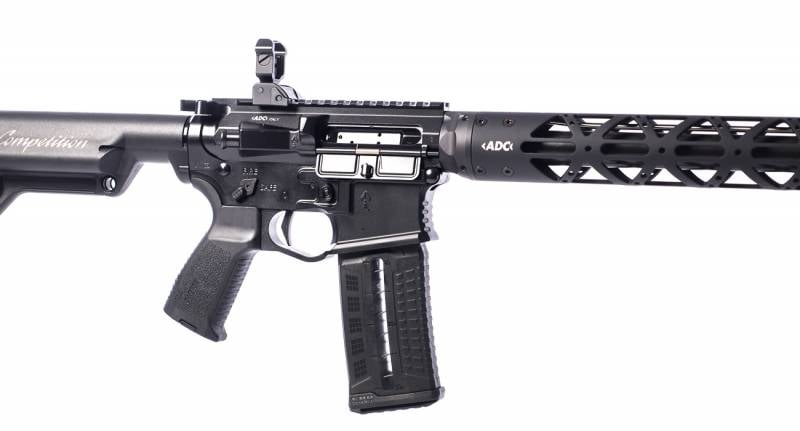 Rifle COMPETITION. Pay attention to the modified shape of the store receiver and the presence on it of characteristic recesses for better retention 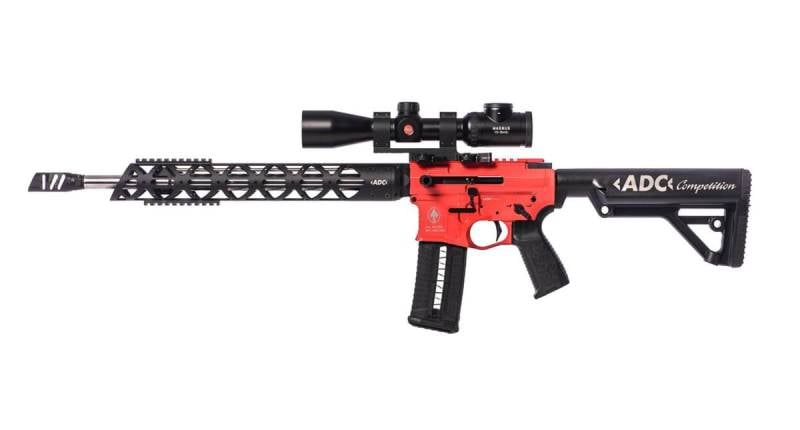 The same rifle in the Match-Grade version. And, of course, the red receiver. Impossible to resist! 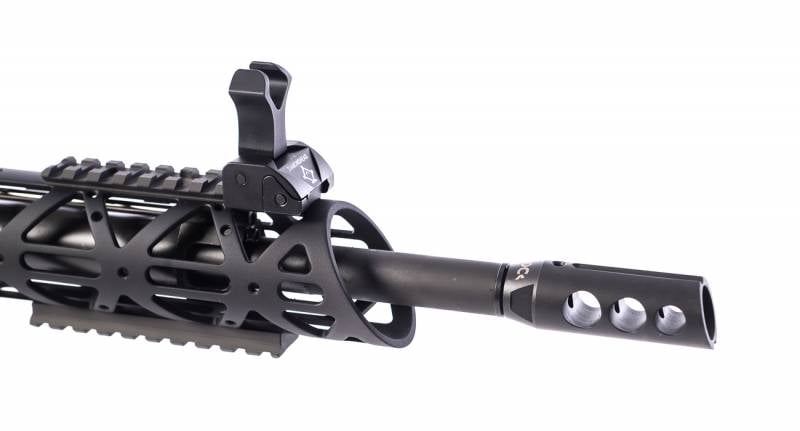 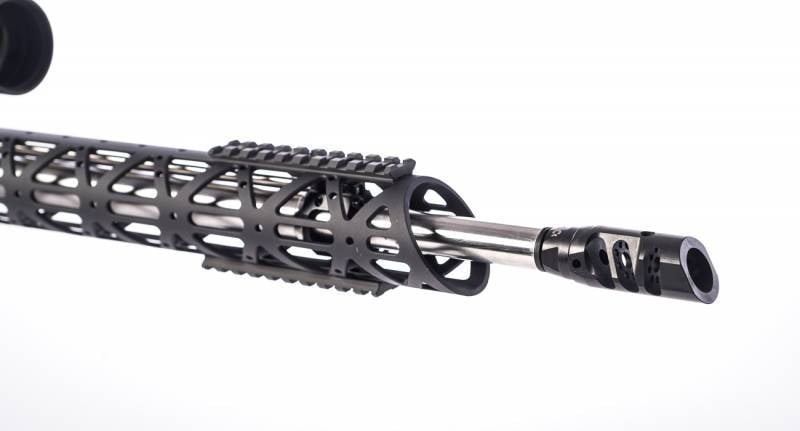 Another version of the muzzle brake-compensator ... By the way, in the basic configuration, the trunks from Lothar are black, but nickel-plated and stainless steel can be made to order! 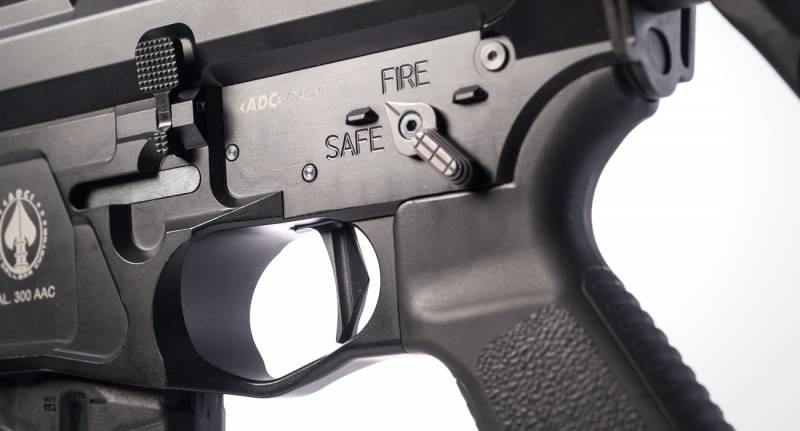 Well, what a beauty! The reload handle can be installed both on the right and on the left. The magazine latch button is on both sides. The fire translator has the shape of a branded arrowhead - a trifle, but how nice!
The COMPETITION series, according to the company's management, is “its flagship,” the result of careful research that has created the perfect weapon for sports. A lot of add-ons have been developed for it, making it easier to shoot with two hands, in short, the convenience of the shooter is put in the first place, because the rifle mechanism itself has long been debugged and brought to full perfection.

Don't like the bright red color? Then how do you like this one?
The basis of the ADC range is also made by such models as Tactical (405 mm barrel, weight 3,37 kg), Special Forces (barrel length 370 mm, weight 3,3 kg), Marksman (with a weighted barrel 510 mm long, weight 4,08 kg) and Tactical Sport (barrel length 405 or 460 mm, weight 3,51 kg). Moreover, all of them can be modified and understaffed in accordance with the wishes of the customer. There are differences, but they are not fundamental. The Tactical rifle is equipped, for example, with a telescopic stock, while the SF model has a fixed stock, but it has an adjustable back plate. 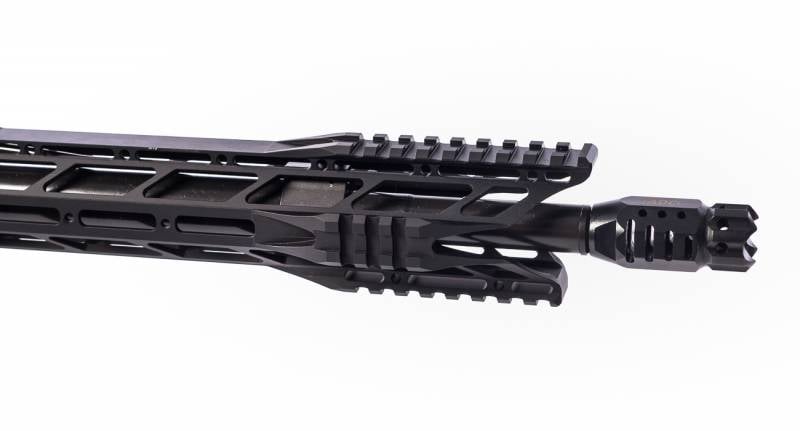 And this is something from Star Wars!
The company itself does not make trunks. This is a complex production, which must be set separately. But at its services there are trunks of the well-known company Lothar Walther. Take it, screw it into your own receiver, put your own aluminum forend, with branded "holes", and your own rifle "Made in ..." is ready. By the way, the forearm also gives a truly unlimited number of options. There is a faceted fore-end "quadrail", but you can put a round one - like Competition. Moreover, you can also put on the forearm Picatinny rail, coordinating its alignment with the bar on the receiver, which will allow you to mount on them a variety of sights at the same time. 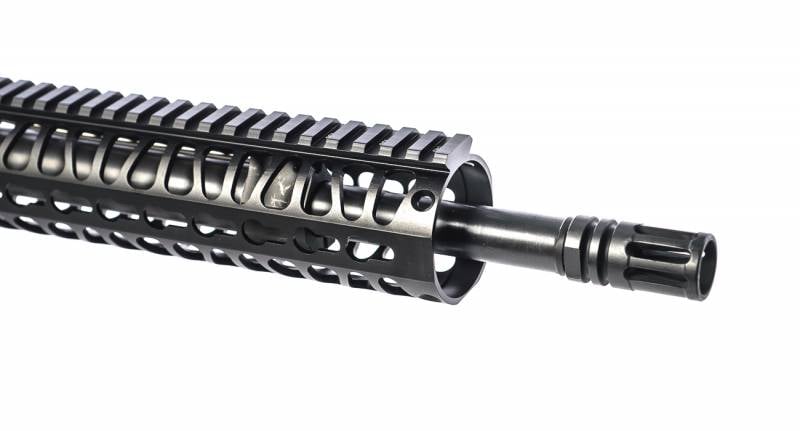 Not as advanced as the previous one, but also ... very modern
Well, now let's dream a little ... Let's say you decided to open your own production of "arches" in Russia. It sounds funny, although there are already those who already release it. But here it concerns you personally. Or here me. I want to release "arches"! But there is no money! And no engineer from me. What to do? Hire people? But you won’t hire without money! We need machines, equipment ... And yet there is a loophole. In any case, you can start with the components, as many others started. After all, the market is the market. Someone needs an "arch", and someone needs a bolt to the "arch", right? So that’s what we can safely do in our conditions literally on the knee, or rather, in the garage: the pistol grip for the same “arches” of the ACD company in the “Arctic version”! What does it mean? And here's what: these handles will be made of birch bark, which, as you know, does not cool your hands, absorbs sweat perfectly and, in general, is characterized by excellent environmental friendliness. And doesn’t we make the handles of knives from her! Yes they do! But who is stopping to make, firstly, the whole pistol grip; secondly, the tactical handle under the openwork forend, and finally, thirdly, the most difficult thing is the ventilated arm pads on the forearm, for a round shape and multifaceted. That is, they must have a metal base, be located at a certain distance from the forend, so as not to block the ventilation holes, and at the same time it is convenient to lie in your hand. 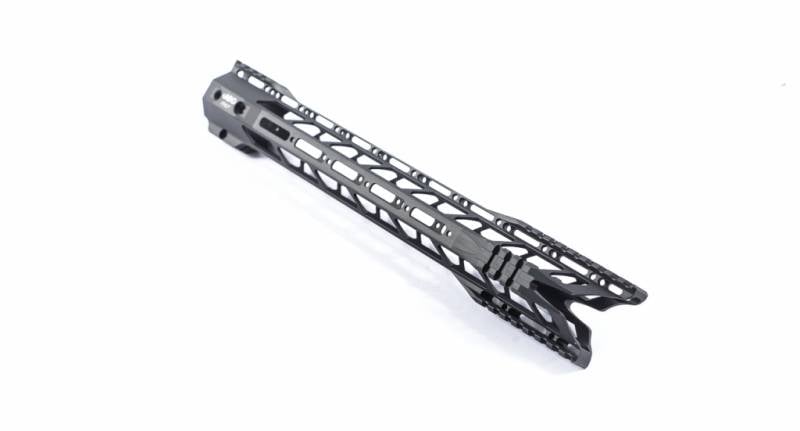 Everything for an upgrade ... once! 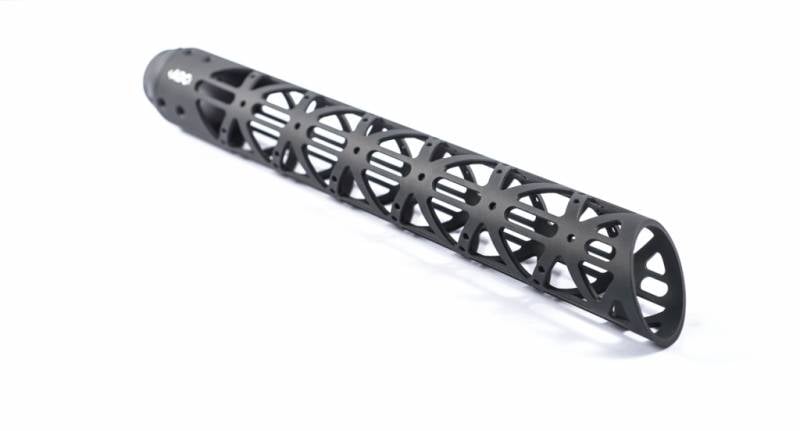 Everything to upgrade ... two! 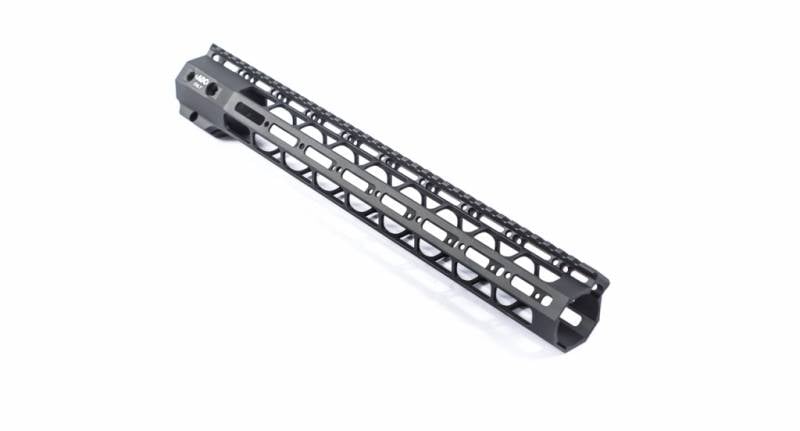 All for an upgrade ... three! Moreover, all this is only a small part of the "spare parts" for the rifle АDC
Can this be done? Yes, it is quite! The pistol grip, for example, consists of only three parts - these are two threaded rods passing through the mass of pressed bark, and the lower “plug”, which may well be “branded”. The tactical handle under the fore-end is essentially the handle of a knife mounted on the fore-end. Well, the pad ... You buy two three forends and come up with a pad for them. That's all. Moreover, you can negotiate with ADC, or you can not agree. Nobody canceled the “Upgrade Kits”. I’ll do what I want. In any case, although such a business will require both money and labor, it is several times cheaper than everything else. And it’s easy for him to do PR advertising. Easier than any other "crafts." But we only need this, right? Plus “we work on individual orders” - “any whim for your money”, and we respect the environment, “all the bark is removed only from fallen trees”. Green World: Hyp-Hyp - Hurray!

Author:
Vyacheslav Shpakovsky
Articles from this series:
Submachine gun carbine: modules, calibers and "whales"
Savage MSR Rifles
"Arches" from Savage, or the New Generation of Modern Sports Rifles
SCAR from Erstal
Savage Very nice 1907 pistol of the year
This weird Mr. Savage: rifles and gun
ARX160 vs just AR-15
FFV-890C vs. AK5: Swedish-Israeli arms competition
AR-15 vs ... AR-15
CZ 805 A1 / A2. No worse than the good old "Bren"
AR-15 of the Schmeisser company