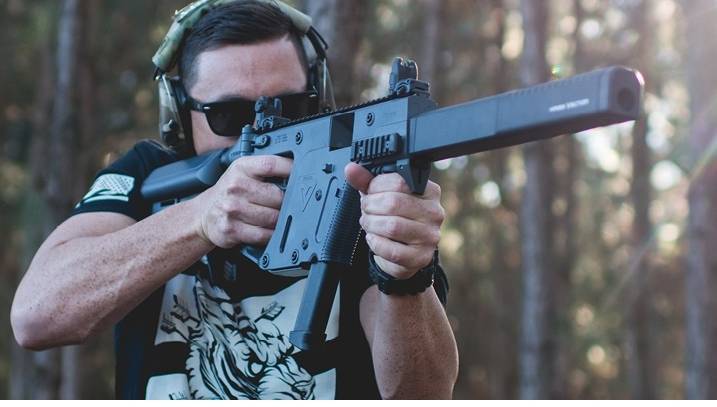 Weapon and firms. KRISS USA is the North American subsidiary of Swiss based KRISS. Its products are sold nationwide, from Virginia to California. Now every self-respecting company must have its own company mission. So, KRISS USA wrote to themselves that their "mission is to provide customers with products that have very high quality workmanship and no less impressive design, which is based on the best practices and innovative ideas." Sounds great, right?

"Vector", a classic of the genre. Caliber 11,43 mm
The Krisovites themselves claim that their trademark is the tip of a spear, that is, they are at the very forefront of scientific and technological progress in the development of modern firearms technologies of the XNUMXst century. They also have their own philosophy underlying the company's approach to creating firearms, its essence is to help the shooter maximize the speed and accuracy of shooting, and therefore the effectiveness of hitting one or more targets. And they succeeded. It was decided to use the patents of the French designer Renault Kerb to achieve the assigned tasks, but on the basis of which the design of a fundamentally new submachine gun with a half-free shutter was created. That is, they learned how to make such a weapon in which the energy of bestowal is used "to work in the interests of the shooter, and not against him, as it was until now." 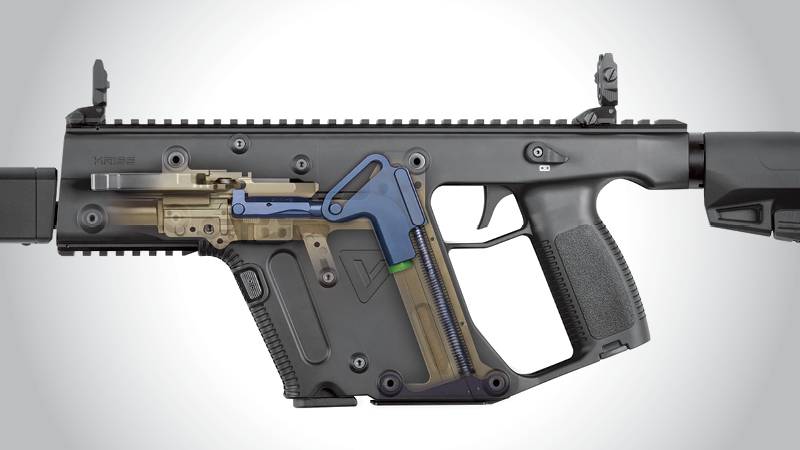 "Vector" in the context. A relatively small shutter and balancer on inclined guides are clearly visible
This was achieved due to the fact that the impulse to roll back the moving parts of the shutter in it is redirected not so much backward as down. At the same time, the KRISS Super V submachine gun shutter itself has a relatively small mass and has protrusions on the sides that enter the inclined grooves of a much heavier balancer. The balancer moves in the body of the submachine gun at a slight angle up and down. During the shot, the shutter movement to its extreme rear position leads to a vertical movement of the balancer downward, and in the first moments of the shutter recoil due to the groove profile on the balancer, its movement is also slowed down.

Way of working
The handle used to cock the KRISS Super V shutter is foldable and is located on the left side of its housing. When firing, it remains stationary, and firing from the "vector" is carried out with the shutter closed. The trigger mechanism of the trigger type is used, which makes it possible to conduct both single fire and shoot bursts. Moreover, the trigger is located above the axis of the barrel and it also houses the translator of the firing modes. The fuse is also located above the axis of the barrel above the pistol fire control handle. A design feature is the cavity in the front of the USM box directly above the barrel, into which, if necessary, the Surefire tactical flashlight can be inserted. The pistol grip of the KRISS Super V submachine gun is significantly higher than the axis of the barrel bore, which also helps to reduce the toss of the barrel and increases the stability of the weapon during firing from the hands without using a stock. 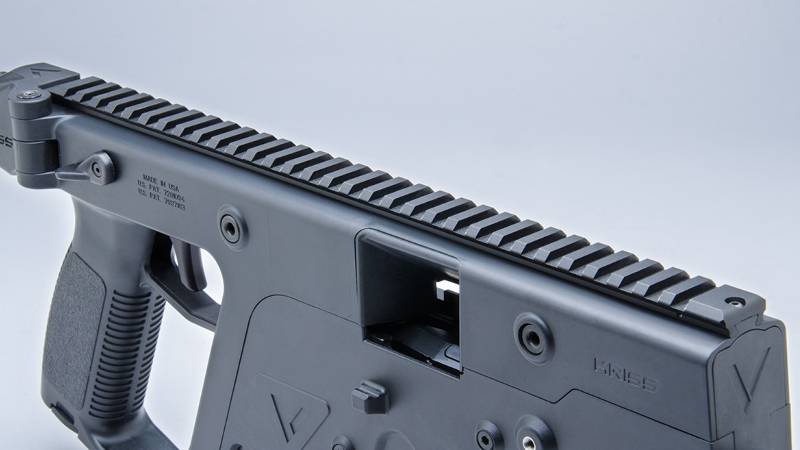 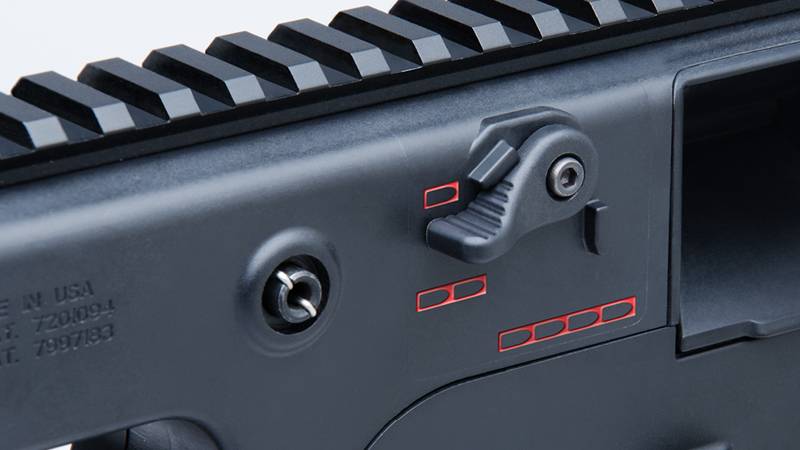 XNUMX-position switch
That's how the engineers of the company developed the innovative KRISS Super V system, in which the removal of recoil energy down and to the side of the shooter’s shoulder can significantly reduce the muzzle of the barrel, which in turn allows the shooter to fire shots at the target with greater speed and accuracy simultaneously . In all these parameters, the TDI KRISS Super V submachine gun is significantly superior to such samples as the German 11,43 mm HK UMP45 submachine gun. 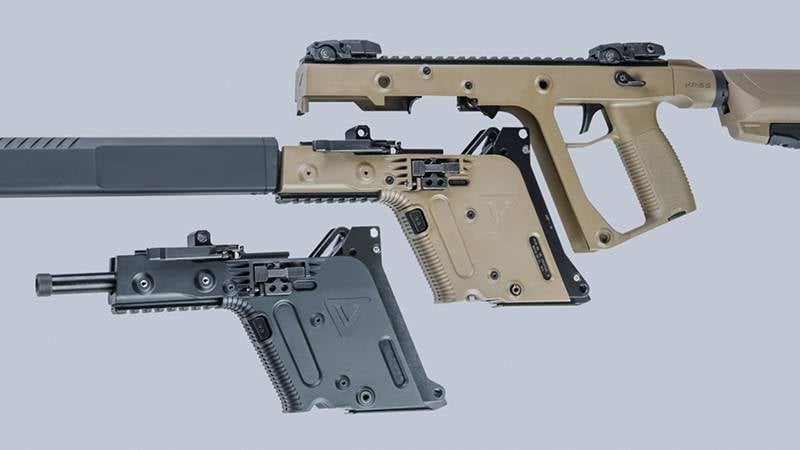 The two main modules of "Vector" with a barrel length of 406 and 140 mm.
At first it was a submachine gun firing .45 ACP rounds and having a corresponding short barrel with a length of 140 mm. But on the latest generations of KRISS’s “vectors”, firstly, in the best traditions of the modularity so popular today, it’s possible to change calibers in accordance with the preferences of customers, and secondly, disassembling them without using tools allows the user to quickly quickly replace barrels with the shutter recoil compensator in seconds.

Lower plug-in module with silencer simulator
Thus came the KRISS Vector CRB / SO with a 16-inch (406-mm) barrel, which is already classified as a rifle, and meets all state standards for rifles, without any special permissions. This is a self-loading version of the “Vector” for the civilian arms market, which also has a silencer simulator, but it only shoots with single shots. The use of an elongated barrel in this civilian version is caused by certain requirements of US law, according to which any civilian long-barrel weapon must have a barrel whose length must be at least 16 inches, otherwise it will be considered short-barrel. 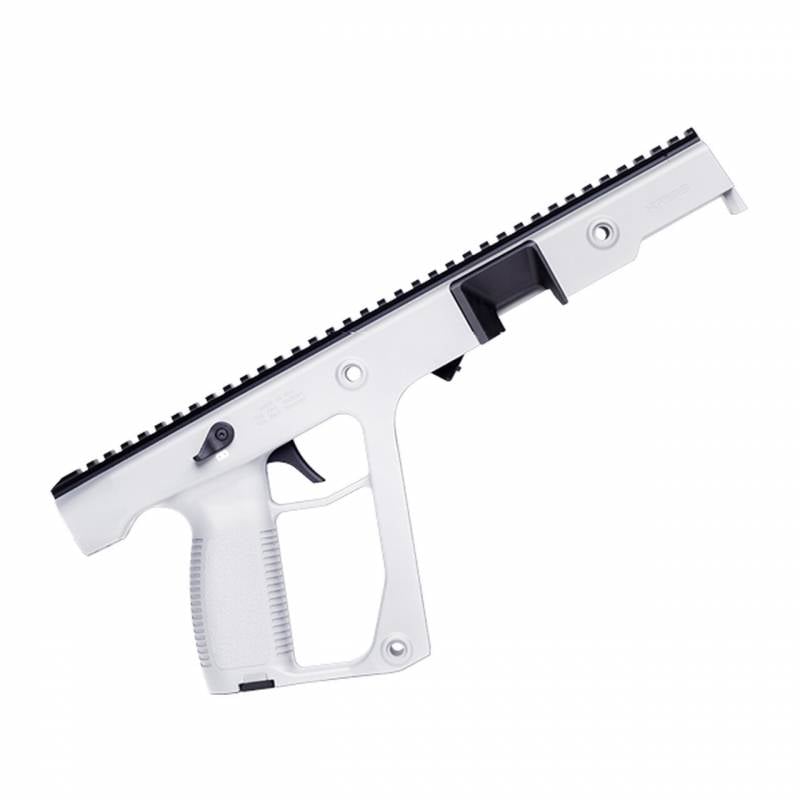 Upper alpine-replaceable module - price $ 294.95 - $ 299.95
The presence of the Picatinny rail MIL-STD 1913 allows you to use the sight so beloved by many shooters with a “red dot” or virtually any optics. Well, and the 13-inch top rail allows you to use optical instruments of any size or length at the choice of the shooter without restrictions associated, for example, with the small length of such a bar on some weapons. 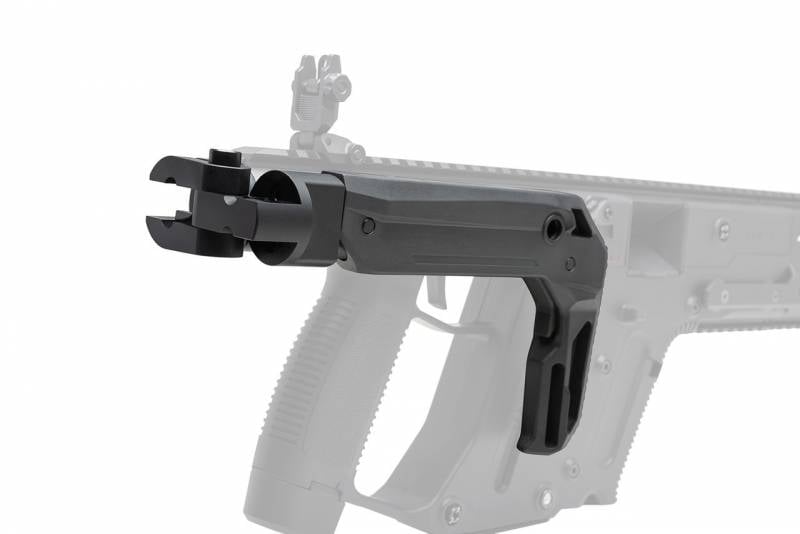 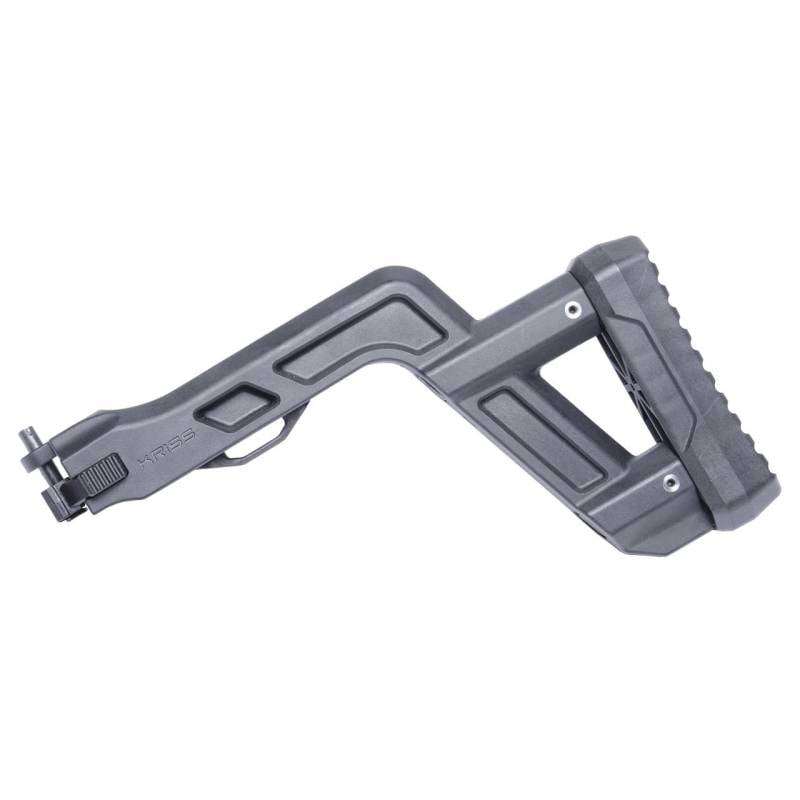 One of the stock options 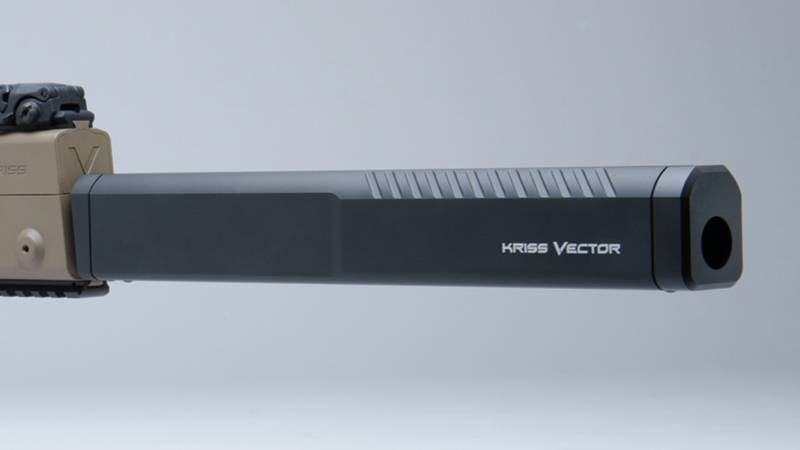 Silencer simulator
There are also “whales” (that is, sets) that allow you to quickly convert the original sample, using sets of finished parts for this. KRISS MagEx 2 Kit and Mag 02. Allows you to turn a standard "Vector" into a carbine. 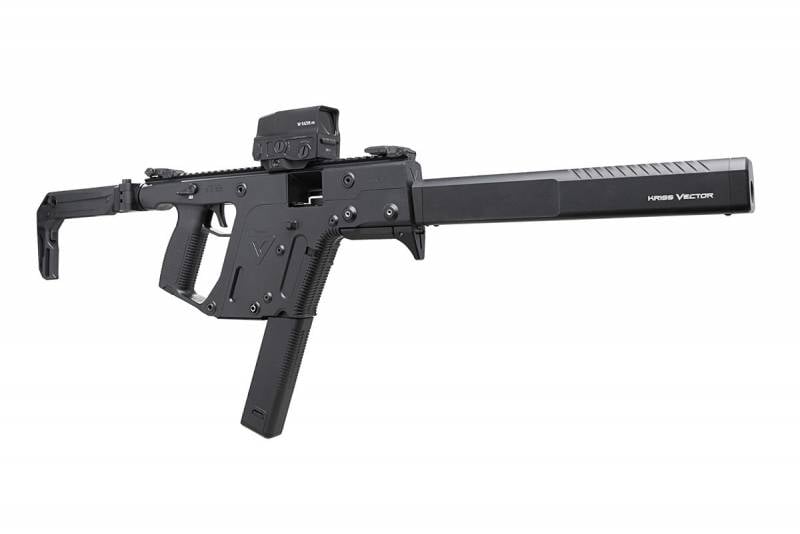 Set ("kit") KRISS MagEx 2 Kit and Mag 02
It is a complete set of parts for a standard Glock pistol magazine. Mag-Ex 2 is ideal for the KRISS Vector and is available in 9mm and 10mm 10x22mm (.40 S&W). Moreover, two magazines with a capacity of 40 rounds of 9 mm and 33 rounds of 10 mm have been developed for it, and the KRISS Vector itself, in turn, is fully compatible with magazines with double-row magazines for the Glock 21 pistol with a capacity of 13 or 30 rounds. 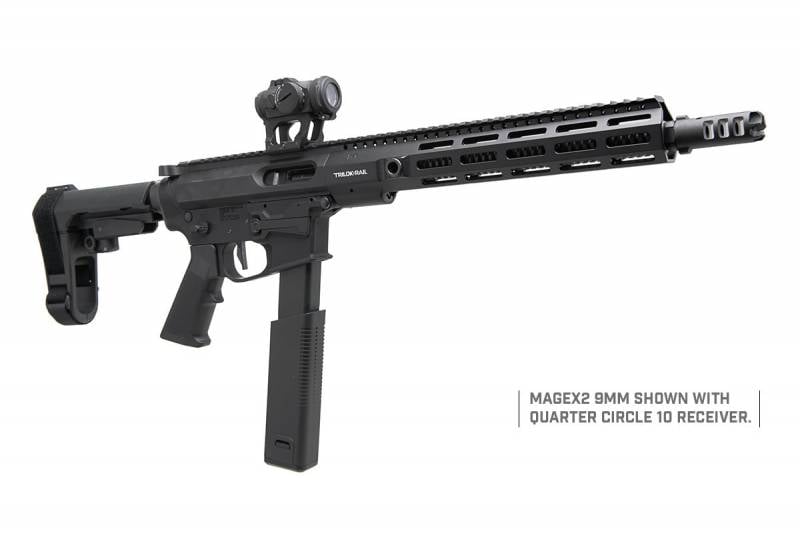 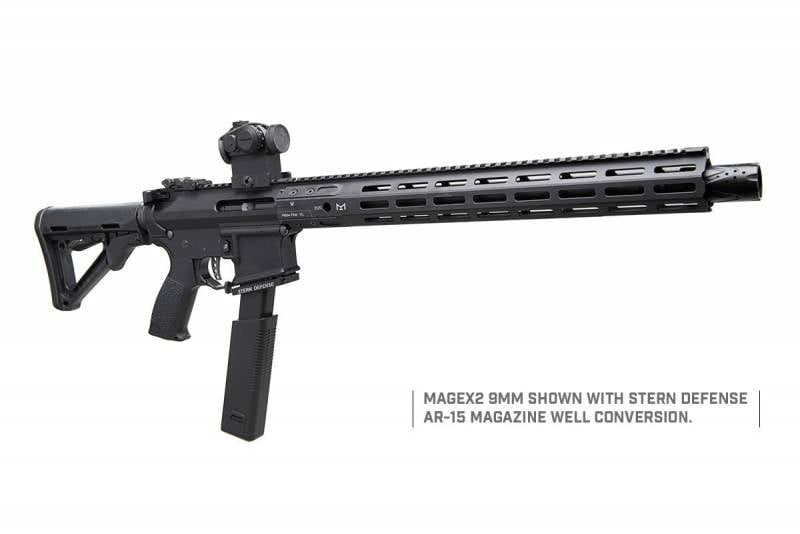 Set ("kit") KRISS MagEx 2 Kit and Mag 03 for cartridges of 9 mm caliber
The stock is made of steel, aluminum and modern polymer composites. It is attached to the top module on a hinge with a push button, and it folds to the right, although the same hinge can also be adjusted so that it folds to the left. The scope of delivery includes two QD swivel mounts on the left and right sides. Interestingly, this butt is also telescopic, and can be adjusted in three positions. 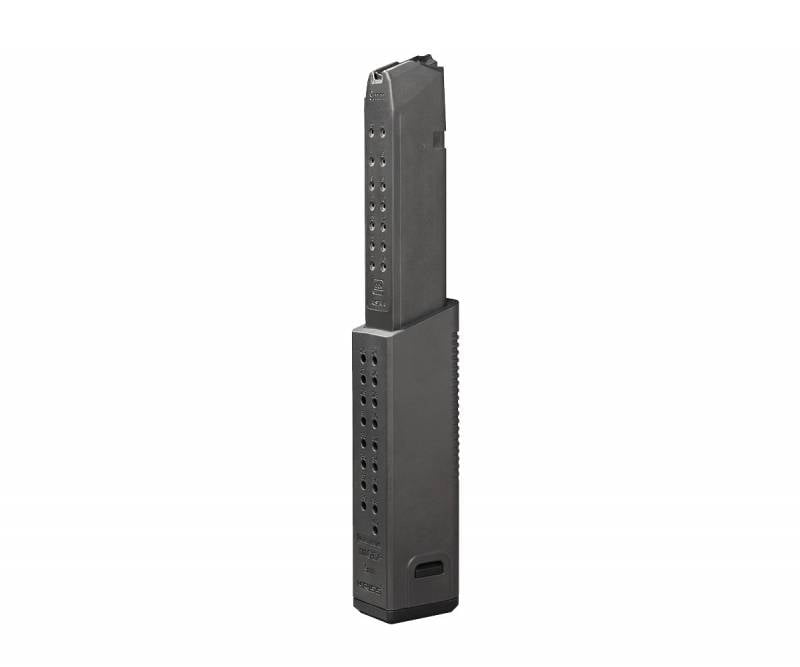 MagEx2 Store 9mm
That is, thanks to such a modular design, the modern Vector submachine gun can easily be transformed into a rifle, or rather a carbine, based on its general dimensions. The company also developed the DMK22 rifle complex, which is nothing but the same AR-15 rifle. Its full name is Kriss Defiance DMK22C .22lr AR-15. This weapon is very well suited for training, since it has virtually no recoil. Empty weight is only 2 kg, which is also very convenient. The handle is metal and also modular, that is, it can be selected in size.

Kriss Defiance DMK22C .22lr AR-15
Yes, but if there is a weapon of one caliber and design, and if there are magazines from other weapons of other calibers (or the same!), Then ... why not combine them? After all, what does a consumer need in a market? The choice! A lot of products similar in their consumer properties, but at the same time having differences. No wonder the release of rifles AR-15 in the United States is not involved except that only lazy. Because there is a demand ... “If I could put Nikanor Ivanovich’s lips to Ivan Kuzmich’s nose ...” - this is the same with rifles and submachine guns. And the Krisovites did just that, and made another “kit”: the KRISS MagEx 2 Kit and Mag 01 chambered for 9mm caliber cartridges and even made a “kit” for the Glock 21 pistol! Sets with different barrel casings were prepared, that is, again, a new product on the principle of "taste, color." 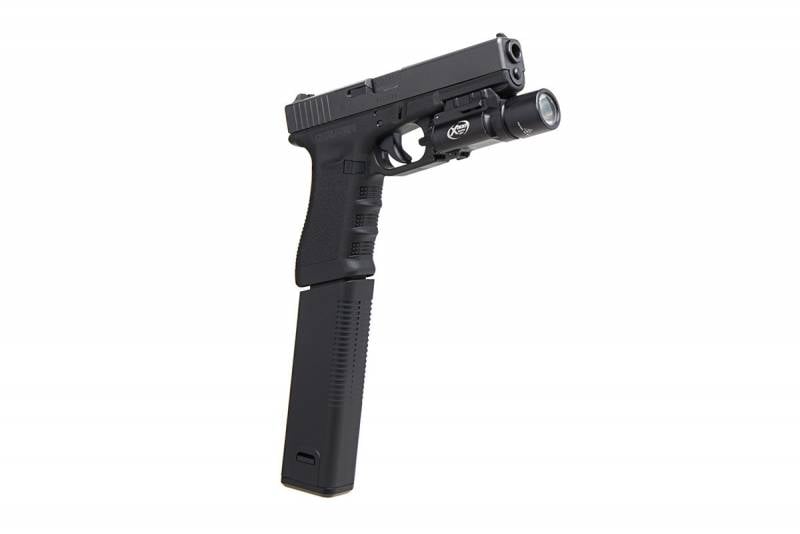 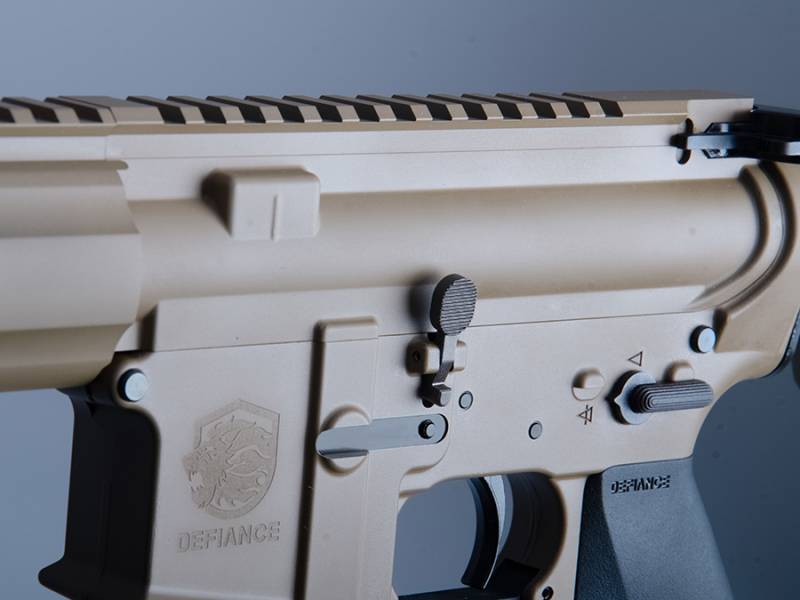 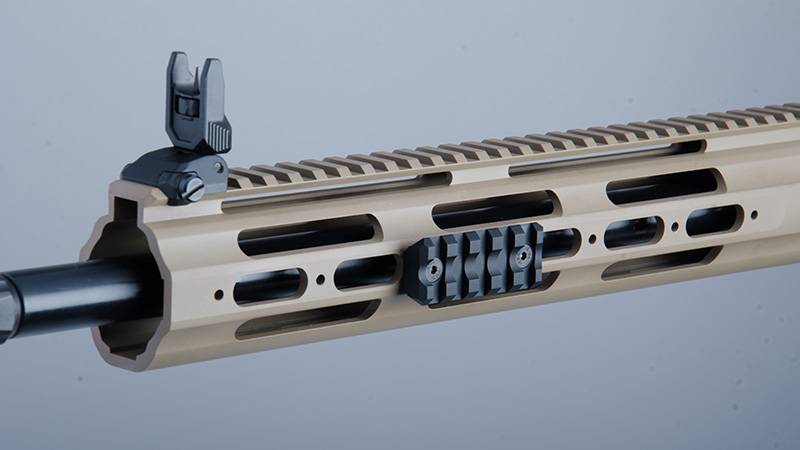 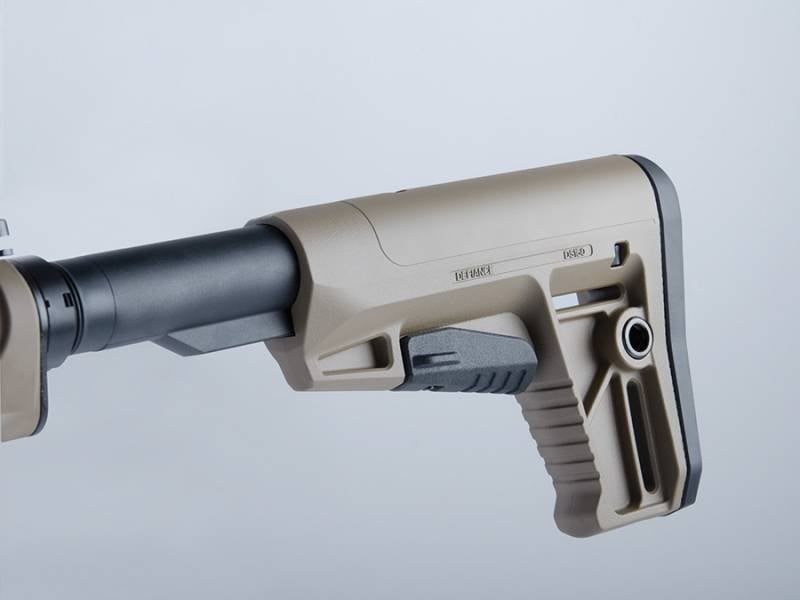 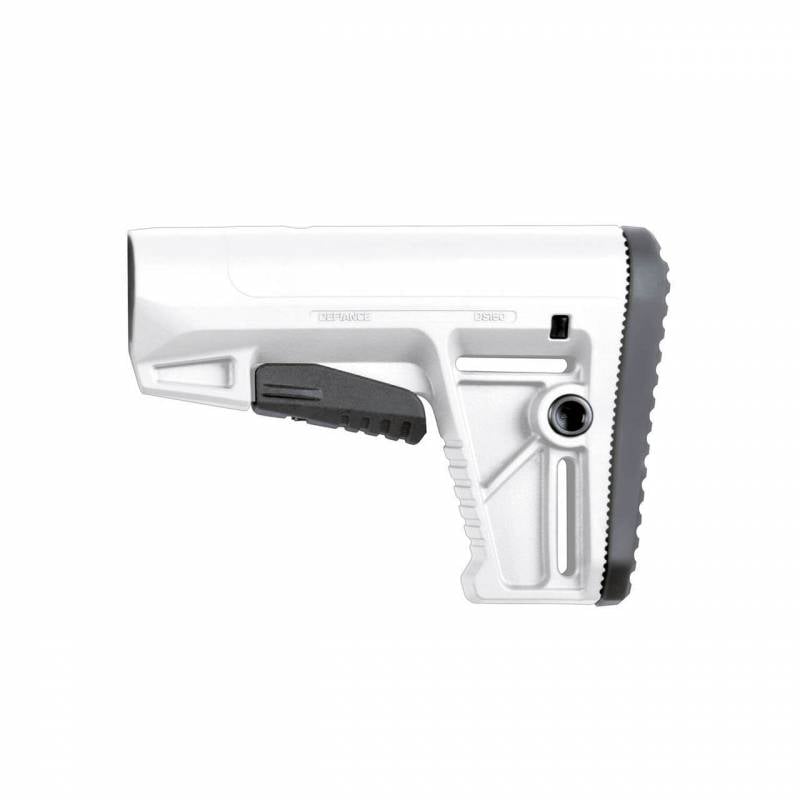 Company samples are painted in a variety of colors, ranging from “Alpine white” to “black terracotta”, which has the feature that does not give glare

Author:
Vyacheslav Shpakovsky
Articles from this series:
Savage MSR Rifles
"Arches" from Savage, or the New Generation of Modern Sports Rifles
SCAR from Erstal
Savage Very nice 1907 pistol of the year
This weird Mr. Savage: rifles and gun
ARX160 vs just AR-15
FFV-890C vs. AK5: Swedish-Israeli arms competition
AR-15 vs ... AR-15
CZ 805 A1 / A2. No worse than the good old "Bren"
AR-15 of the Schmeisser company