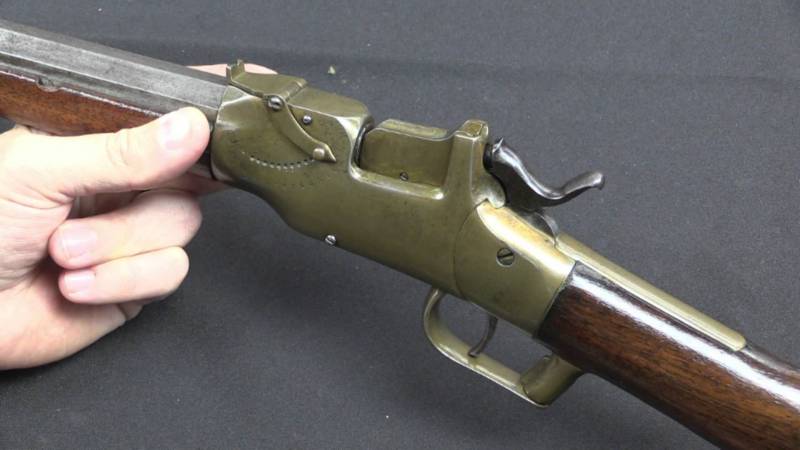 Eten Allen's carbine from Massachusetts. The lever for setting the aiming frame and the button for locking the bracket behind the trigger are clearly visible

You can't recognize the face behind the mask
In the eyes - nine grams of lead
Its calculation is precise and clear.
He will not climb on the rampage,
He is armed to the teeth
And very, very dangerous!
V. Vysotsky, 1976

Military affairs at the turn of the eras. Last time we met with a number of carbines from the "carbine epic" of the American Civil War, however, there were so many of them that it was simply impossible to fit them all into one material: this would make it completely unreadable. Therefore, I had to divide the article into two parts and continue our story about the carbines of the American cavalry of the North and South. 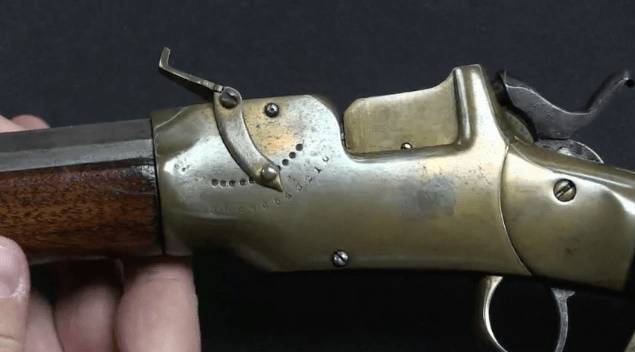 Allen's carbine. View of the receiver on the left. By unscrewing the screw at the bottom, it was easy to remove the shutter
Ethen Allen from Massachusetts was a major manufacturer during the American Civil War weapons... On September 18, 1860, Allen, along with Thurber, patented a breech-loading rifle, which they later converted into a carbine. This weapon was not officially adopted for service, but the same carbines were very often armed with scouts and militias. After the war ended, these carbines were adopted by some northern states for their units of the mounted militia.

Allen's carbine. Appearance
The carbine had a bolt that could be raised and lowered with a bracket-lever in the grooves of the receiver. It was originally designed to use a cartridge with a nipple cap, which Allen patented in 1860. However, the "nipple cartridges" were not successful, so the carbine was redesigned for more acceptable ammunition. Moreover, the highlight of the design was its shutter, suitable for both the use of cartridges of both types. For this, two channels for the striker were provided in it. One is central, and the other is located slightly higher than the first. The trigger hit both of them equally!

The disadvantage of the carbine was the complexity of manufacturing the receiver, which was first milled and then brought to the desired size with files by hand!

Frank Wesson's carbine was produced between 1859 and 1888. in Worcester, Massachusetts. Many northern states purchased this carbine during the Civil War, including Illinois, Indiana, Kansas, Kentucky, Missouri and Ohio. It was one of the first carbines chambered for metal rimfire cartridges, and it was produced in calibers .22 .32, .38, .44. Subsequently, all of them were successfully converted under the central battle cartridges.

Receiver of Wesson carbine. Right view. A feature of the carbine was the presence of two triggers, and by pressing the first, the barrel was disengaged from the bolt and rose to the loading line. An empty case or cartridge in the chamber was removed using a manual extractor, the handle of which is clearly visible in this photo
Its prototype was patented by Frank Wesson and NS Harrington as early as 1859, and in 1862, Frank Wesson received a patent for an improved model. In addition to all other advantages, the carbine is also quite light. So, with a 24 "barrel, it weighed only 6 pounds, while models with a 28- and 34-inch barrels weighed 7 and 8 pounds respectively. By 1866, twenty thousand of these carbines were made, of which the American army purchased 8000 copies.

Wesson's carbine. Left view
The quality of the Wesson carbine is evidenced by the results of a competition held on October 7, 1863 at a fair in Missouri. Then the shooter from him hit the growth target 45 times out of 100 from a distance of 300 yards. During a shooting competition in St. Louis, a similar target was hit 56 times out of 100, while the second-place rifle scored ... 10 hits out of 100. In Massachusetts, 20 shots, fired one after the other, hit a growth target at a distance of 200 yards, while achieving a rate of fire equal to 50 shots in 4 minutes.

Wesson's carbine. Right view
The carbine was primarily used in the northerners' army. But in November 1862, the Confederates were able to smuggle 10 carbines and 5000 rounds of ammunition from Texas. For this, Harrison Hoyt, who carried out this operation, was brought to trial in January 1865. By the way, the Wesson carbine at that time cost $ 25, and the cartridges for it were $ 11 per thousand. Their release was carried out until 1888.

He's on the left
The .54 caliber Merril carbine was patented in 1858 by James H. Merrill of Baltimore. In the first version, paper cartridges were used, but in 1860 the second was developed, for a metal sleeve. At the beginning, the carbine was considered more like a sporting weapon: it was accurate, very reliable with good care, but it had a rather complex mechanism, and most importantly, not interchangeable parts. 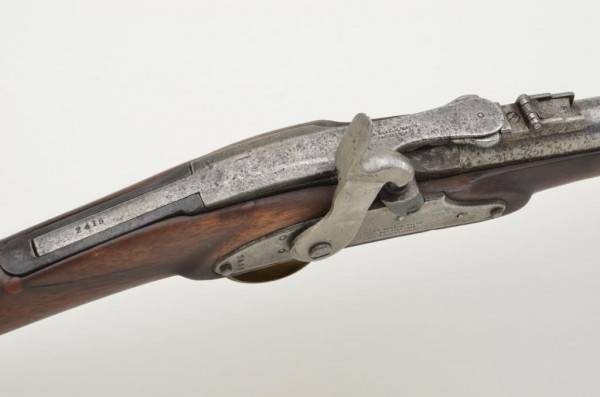 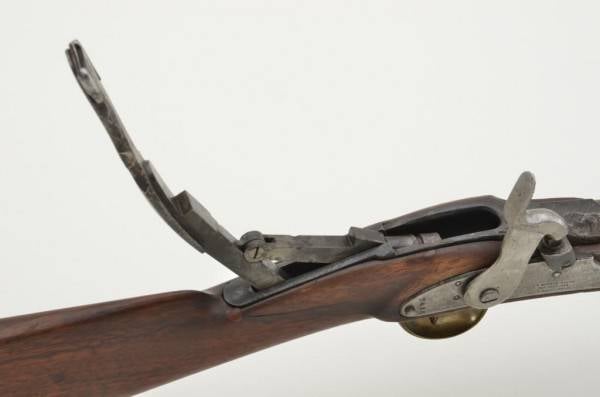 The shutter is open. As you can see, the bolt of this carbine looked like a piston, which was opened by a lever that lay on top of the receiver. This locking was very strong, the hammer drive from the trigger was quite complicated
The carbine was used in the most active way by both the northerners and the southerners, since at the beginning of the war the Confederates managed to capture a large number of such carbines in warehouses. They were most widely used in the Virginia cavalry regiments. The southerners were very pleased with this carbine, but the northerners, who had the opportunity to choose, treated it rather negatively, since they believed that it had a fragile mechanism. So by 1863, most of Merril's carbines were removed from the army. A rifle based on it, as well as a carbine designed by Merrill, but modified by a certain Jenks, did not go into the army.

Maynard's carbine was a very original example of the Civil War period, about which some spoke very well, while others very badly. Its design was truly unique. It had a metal cartridge with a developed rim, but ... without a primer. The charge in it was ignited from the capsule, put on the brand tube, through a hole in the bottom, usually smeared with wax. 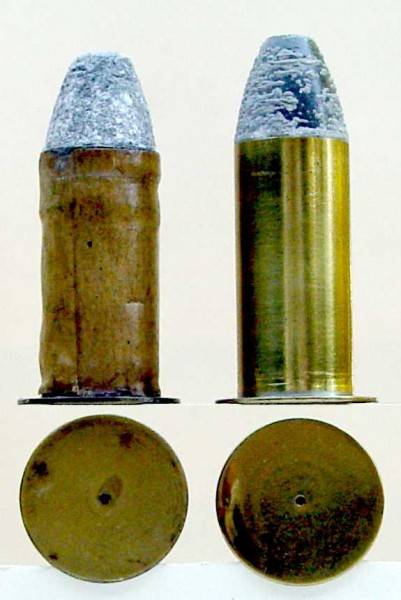 Maynard cartridges appearance
That is, the creator of this carbine made sure that he did not have problems with the cartridges. I bought a bullet, lead, gunpowder (and this was in abundance!), A dozen other cartridges - and equip them yourself as needed. The main thing is that the sleeve can withstand multiple reloads. But with this there were problems, in addition, through the ignition hole in it, powder gases entered the mechanism of the carbine and then into the shooter's face. Nevertheless, this carbine in terms of rate of fire was also noticeably superior to any muzzle-loading weapon, and therefore these shortcomings were forgiven him. 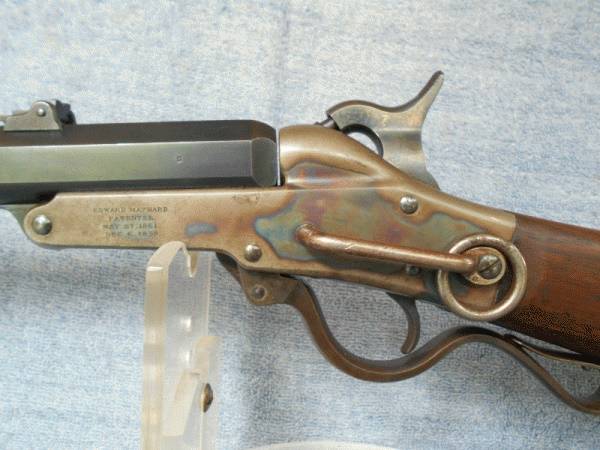 Receiver of Maynard's carbine. Left view. It is clear that we have in front of us a typical breakaway gun, controlled by a lever-brace
Southerners, who also used this carbine, learned how to sharpen casings for it on a lathe. In the cavalry, such casings were reloaded up to a hundred times. So for their limited capabilities, this carbine turned out to be a very suitable weapon!

The same carbine. Left view
The Gallagher carbine, designed by Mahlon J. Gallagher and patented in 1860, also fought during the American Civil War and was a rather rare type of firearm among those used in this conflict, although it was produced by Richardson and Overman of Philadelphia in the amount of 22 pieces. ... This was more than the number of Jocelyn and Starr carbines, but still significantly less than many other models.

Carbine "Gallagher"
"Gallagher" had a rather unusual design of the bolt, controlled by a lever mechanism. The lever on it was a trigger guard, like on many other carbines of that time, but when you press it down, the barrel first moved forward, and only then dropped down. This allowed the shooter to remove the used cartridge case, but this very often had to be done with a knife! Then the barrel returned to its place and locked when the lever was fixed in the upper position. The barrel had six grooves and a length of 22,25 inches (0,57 m). The caliber of the carbine was 0,50 inches (12,7 mm). The length of the carbine itself was 39,3 inches (0,99 m).

In practice, he was not very popular. Despite the fact that it was well made and rarely had problems with the operation of its mechanisms, the shooters often had difficulty retrieving the spent cartridges, since it lacked an extractor. The cartridges were made of paper or brass, but ... with a bottom sealed with paper. It is clear that such ammunition did not have any advantages over centerfire cartridges and even rimfire.

The last carbine, which will be described here, is the William Palmer carbine - the first in the American stories A sliding bolt-action carbine adopted by the US Army. Produced by EG Lamson & Co. at the very end of the Civil War. 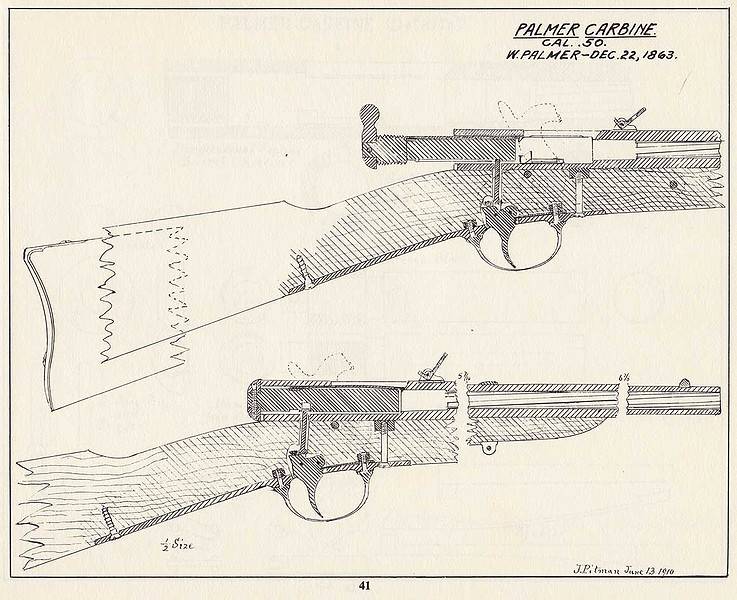 Diagram of the bolt device of the carbine by William Palmer
The carbine was patented in 1863. In June 1864, 1000 carbines of this type were ordered, but the supply of their army was delayed due to the problem of choosing a caliber for it. Initially, the army wanted a .44 caliber carbine. It was only at the end of November 1864 that it was decided to stop at .50. The fact is that the manufacturers of cartridges in those years did not yet know how to pull out long sleeves. But the .50 caliber cartridge had a shorter sleeve, but at the same time it had the same volume and could provide a sufficiently strong powder charge in it. As a result, 1001 carbines were delivered only a month after the American Civil War ended. 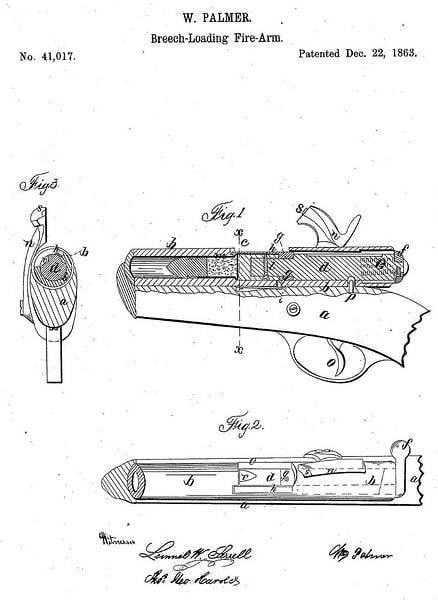 William Palmer carbine patent 1863
The carbine was arranged in the simplest way. The cylindrical receiver was simply screwed onto the barrel. The cylindrical shutter was machined from a whole piece of steel. The outer trigger hit right on the rim of the cartridge, which, when the barrel was locked in one place, that is, against the trigger, fell into a small cutout. Spring extractor. The reflector is also spring-loaded, so the shooters did not need to shake the sleeve out of the receiver after firing. The trigger could not be pulled if the bolt was not locked, since in this case its nose did not reach the rim of the cartridge. Only when the bolt was completely locked could the hammer strike the rim freely.

Palmer's carbine. Right view
Well, then it happened that the Civil War ended, a huge amount of weapons went to arsenals and for sale, and the US Army again came to the same thing, from where it began - maximum savings on everything. So for the needs of my post-war cavalry I chose the Springfield single-shot carbine with a folding bolt instead of the Winchester of 1866, well-known from the movies. Subsequently, it cost her dearly, but this is a completely different story.

Author:
Vyacheslav Shpakovsky
Articles from this series:
The carbine epic of the northerners and southerners
General Burnside's carbine: the first with a metal cartridge
People and spades
Rondash and rondachiers. From benefits to beauty
Artillery of the conqueror of Europe
Artillery innovations of the civil war between North and South
Mortars "Dictator" in the battles of the North against the South
Shuvalov's "secret howitzer"
North and South: smooth-bore and rifled guns
US Civil War ammunition
The most popular caliber of the North and South
Cannons of Tredegar and the Noble Brothers
Cannons of Brooke and Viard
James and Sawyer cannons: rifled versus smoothbore
"The parrot gun." Man and his instrument
Faceted bore gun

Ctrl Enter
Noticed oshЫbku Highlight text and press. Ctrl + Enter
We are
The carbine epic of the northerners and southernersGeneral Burnside's carbine: the first with a metal cartridge
Military Reviewin Yandex News
Military Reviewin Google News
176 comments
Information
Dear reader, to leave comments on the publication, you must to register.