The carbine epic of the northerners and southerners 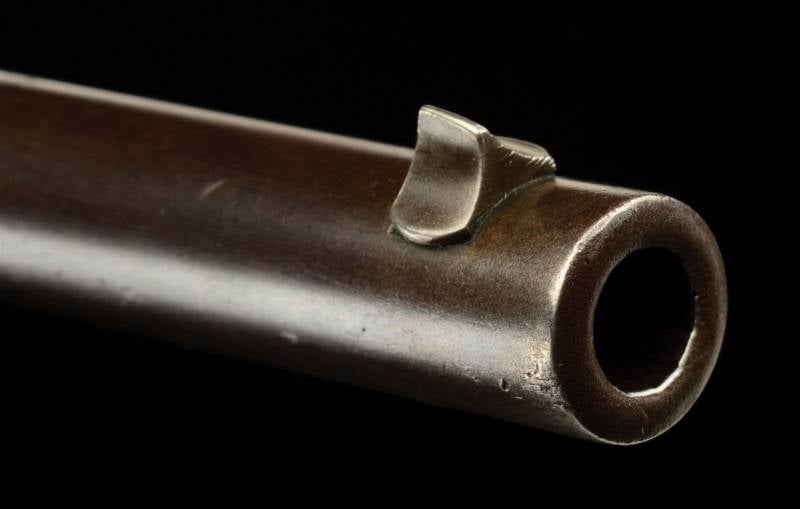 Oh, how many of these barrels with a front sight at the end people saw at that time for the last time in their lives! A point-blank shot from such a 12,7 mm carbine will fire, and that's it, it won't leave you any chance!

With a rifle, but without knowledge - there are no victories, only you can do it weapons any troubles!
V. Mayakovsky, 1920

Military affairs at the turn of the eras. In the past material about the Burnside carbine it was said that it just so happened that at the turn of times, when the old weapon was literally replaced by a new one in one or two years, it was the cavalry carbine in the United States that had a particularly important role to play. They tried to make and release all and sundry, engineers, generals, and even dentists. As a result, the belligerent armies received a variety of samples of these weapons, and even life itself showed what was good and what was bad. And there were so many of them that it is just right to talk about a kind of "carabiner epic" that took place during the war between North and South. And today we will tell you about it.

So, in the first place in terms of distribution in the cavalry, especially at the beginning of the war, were percussion, that is, capsule, muzzle-loaded, Springfield and Enfield carbines. Then came the more comfortable models "Starr", "Jocelyn", "Ballard" and, of course, the famous "Sharps". These carbines were reloaded using a bolt action. At the same time, breakaway carbines appeared: "Smith" (which we already talked about last time), "Gallagher", "Maynard" and "Wesson". The popularity of the new weapon was enormous. So, Burnside sold 55000 of his carbines, and Sharps more than 80000, but with all this, they were not the most common. The same Spencer carbines were purchased more than 94000 copies, Henry rifles - 12000, however, these were not cavalrymen, but infantrymen. But there were also samples that were purchased in quantities of even 1000 copies and, by the way, speaking, they are also very remarkable from the point of view stories military affairs. 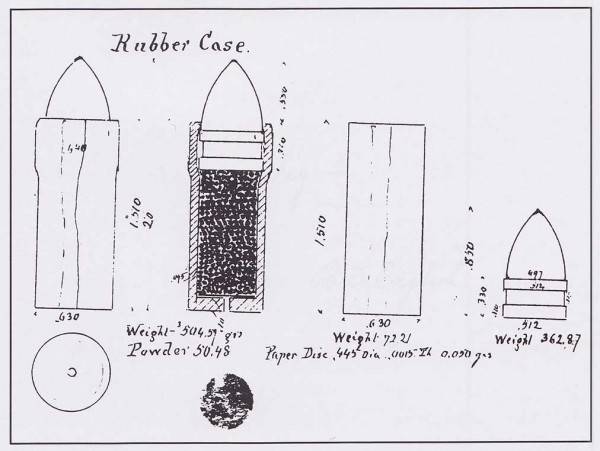 Well, to get acquainted with them closely, we, perhaps, will begin with the "rubber cartridge" for the aforementioned Smith carbine. This is how he and the bullet to him looked in section. But there was also a paper, cheaper version of this ammunition. Nevertheless, with all the positive aspects of the design of this cartridge, its combat life was short-lived, and this carbine itself was widespread, despite all its elegance, did not receive
The carbine of the design of Ebenerez Starr, who had created a good revolver before this, appeared in 1858. He presented it to the Washington Armory for evaluation, where the model was tested and it was found that the weapon does not misfire, the accuracy was recognized as better than average. But testers also noted that if the gas seal were more advanced, this carbine would be better than its competitor, the Sharps carbine.

Carbine "Starr". Left view
However, between 1861 and 1864, the Starr Arms Company in Yonkers, New York managed to produce over 20 pieces of this rifle. Moreover, the 000 model was developed for firing paper or linen cartridges. But in 1858, the government ordered 1865 Starr carbines for cartridges with metal cartridges. They turned out to be quite successful, and then 3000 more were ordered. However, while the Starr carbine proved to be effective during the Civil War, it was unsuccessful during the 2000 tests conducted by the US Army Testing Commission, and no further orders followed after the war. Although during the war, the Starr Arms Company was the fifth largest supplier of carbines and the third largest supplier of single-shot .1865 caliber pistols. But after the end of the war and the absence of new government contracts, Starr could no longer compete with larger manufacturers such as Winchester, Sharps and Colt, and his company ceased to exist in 44.

Carbine "Starr". Right view
The Starr carbine was similar in design to the Sharps carbine, but had a longer receiver. Barrel caliber 0,54 (13,7 mm), length 21 inches. The weapon had a total length of 37,65 inches and a weight of 7,4 pounds. The carbine had a three-position rear sight, which consisted of a rack and two flaps. The bolt, when the lever moved down, also cut off the bottom of the cartridge, after which the lever was returned back, and the bolt locked the barrel. The remains of the old cartridge after firing from the barrel were not removed, but pushed forward with a new cartridge. The weapon fired reliably as long as the long channel of fire torch transmission from the primer to the cartridge remained clean.

Carbine "Li". Left view
James Paris Lee is known today as the inventor of the detachable box magazine in the Lee-Enfield rifle system, that is, as a person who made a significant contribution to the development of firearms. However, his first experience in the development and production of weapons turned into a shameful failure.

Carbine "Li". Right view
Lee patented the oscillating barrel system in 1862 and hoped to get an army contract for it. In February 1864, he presented his model of the rifle to the army, but he was rejected - the army was not interested in such a weapon. Then Lee offered her a carbine in April 1864, and it was accepted for testing, since the army of carbines was still not enough. However, it was not until April 1865 that Lee received a contract for 1000 carbines at $ 18 each. Lee found investors, raised capital, and established Lee Fire Arms in Milwaukee, Wisconsin to manufacture them. The first two examples were introduced in January 1866, chambered for .42 rimfire cartridges. 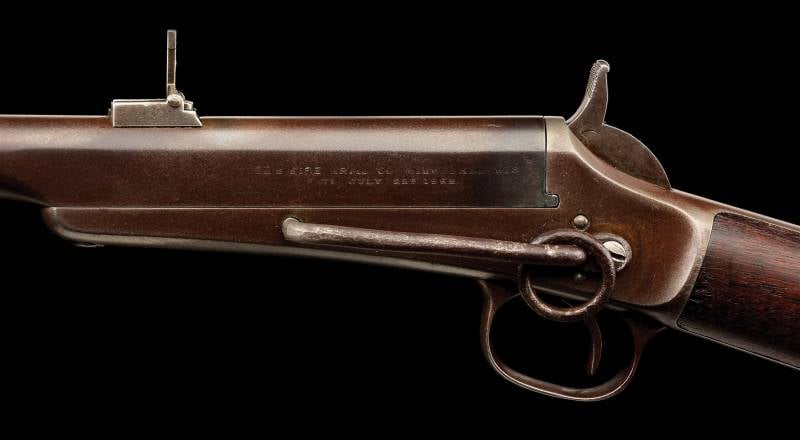 The receiver of the "Lee" carbine and on it a bracket with a ring for a running belt
And then a scandal erupted. The government stated that the contract specified caliber .44 (11,3 mm) rimfire and that delivery of .42 (9,6 mm) was unacceptable. A lawsuit was initiated, but with the termination of the contract, the company had to quickly look for a backup option for selling ready-made carbines. And in March 1867, newspaper ads were placed in Milwaukee for the Lee sporting rifles and carbines. By 1868, production ceased and Lee Fire Arms ceased to exist. 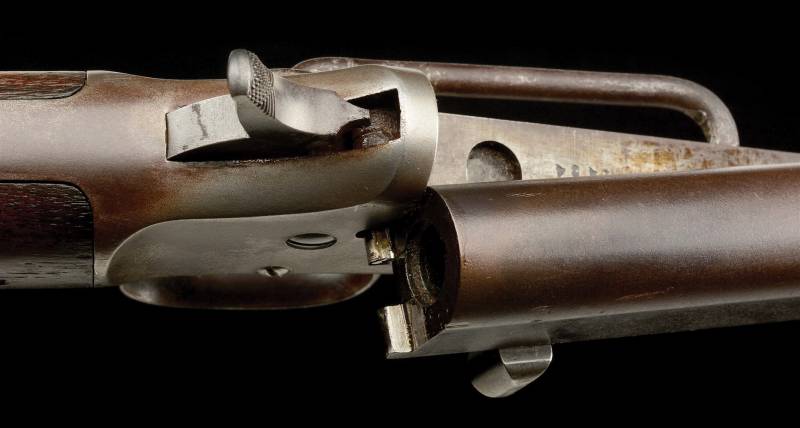 The barrel of the "Li" carbine, retracted to the right for reloading
James Lee himself returned to his former profession of watchmaker, but he did not forget the experience of developing weapons and in 1872 returned to work with Remington. And in the end, he created the store known to everyone today. Well, there is only one conclusion from this story: the creation of firearms is a risky business and not for the faint of heart. However, sometimes you can do better the next time with bad experiences.

Sights of the carbine "Lee"
The carbines had a two-position rear sight, a cavalry ring rail mounted on the left side of the receiver, blued steel parts and an elegant wooden stock. The hand extractor was located on the right side. In his patent for an earlier pistol on which the carbine was based, Lee explained that the bolt would lock when the trigger was pulled or fully cocked. When the hammer was half cocked, the bolt could be pulled aside for reloading. 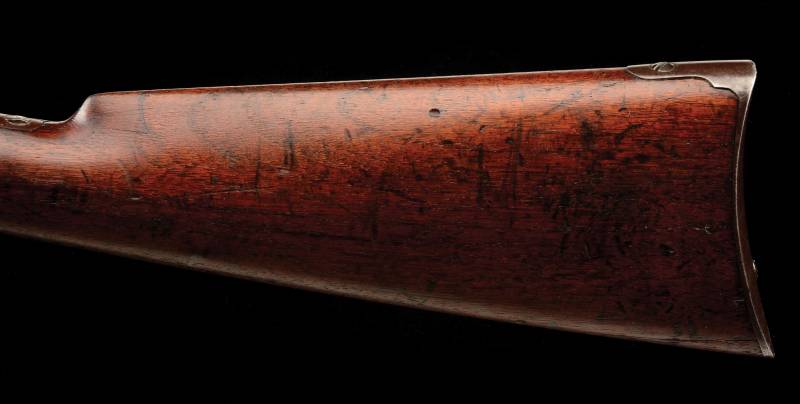 The butt of the carbine "Lee" 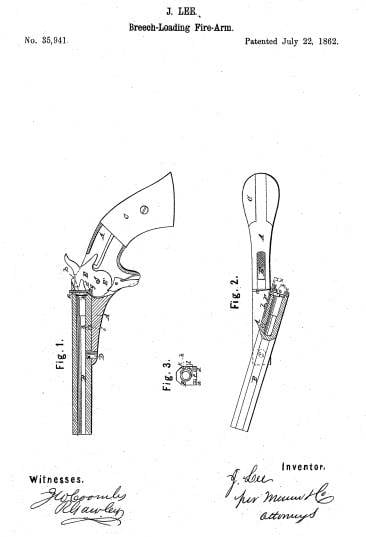 Lee's patent for a single-shot pistol of his own design, which, however, was never produced ...
Benjamin Franklin Jocelyn was known as one of the most famous weapons designers of the American Civil War era, although his fame was most likely created by constant litigation with subcontractors and the federal government, rather than the quality of his weapons, especially since his proceedings with the government then lasted for many years. after the end of the war.

Carbine "Jocelyn" 1862. Left view
In 1861 he developed an improved version for a metal rimfire cartridge. The Federal Armaments Directorate ordered him to test 860 of these carbines, which were supplied to them in 1862. Received their units from Ohio. The reviews were good, so everyone in the same 1862 gave Jocelyn an order for 20 of their carbines. The delivery of their army began in 000, but by the time the war ended, it had received only half of its order. 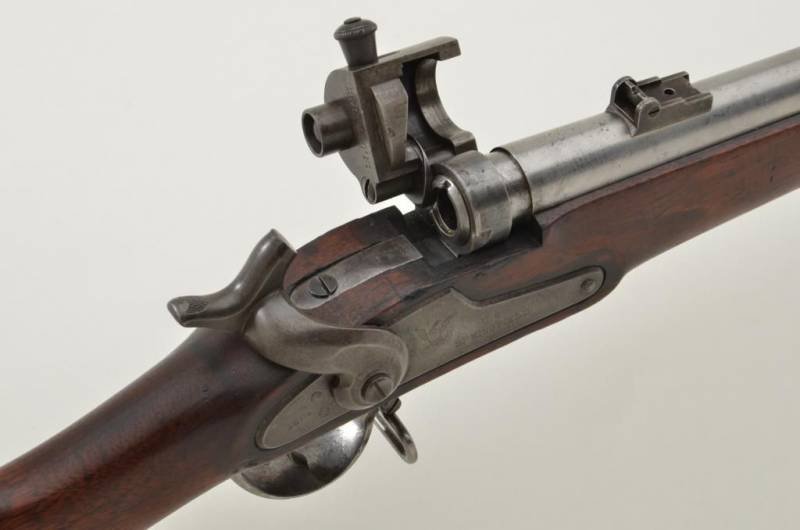 Carbine "Jocelyn" 1862. The shutter is open
In 1865, Jocelyn introduced two more carbines for testing based on the 1864 model. The US government ordered 5000 new carbines, the Springfield Arsenal produced about 3000 before the fighting ended, but then all contracts were canceled as the hostilities ended.

In 1871, 6600 Joslyn carbines, as well as 1600 of his own rifles, converted for .50-70 caliber central battle cartridges, were sold by the Americans to France, which was at that time in the Franco-Prussian war and was in great need of weapons. Many of them became trophies of Germany, were sold to her in Belgium, where they were converted into shotguns (!) And then sent to Africa.

The first model of the Jocelyn carbine in 1855 used burnable paper cartridges ignited by shock capsules. The rifle had a 30 "barrel and an overall length of 45". The carbine had a 22 "barrel and a total length of 38". The carbines purchased by the US Army were .54 caliber, but the carbines ordered by the Navy, for some reason, were .58 caliber. It was possible to attach a “sword” bayonet to the barrel.

The 1861 model used metal rimfire cartridges and a side-hinged breech bolt that opened to the left for loading. This design was then improved upon in 1862 with the addition of an extractor. The 1861 model used the .56 (14,2 mm) rimfire Spencer cartridge, and the 1862 carbine used its own improved cartridge. The barrels were not designed for bayonet installation.

Jocelyn M1865 rifle with bayonet. The 1865 model of the year produced by the Springfield Arsenal was essentially the same musket as the Springfield M1863 rifle, except that it had a Jocelyn bolt on it instead of the old M1863 capsule bolt.
To be continued ...

Author:
Vyacheslav Shpakovsky
Articles from this series:
General Burnside's carbine: the first with a metal cartridge
People and spades
Rondash and rondachiers. From benefits to beauty
Artillery of the conqueror of Europe
Artillery innovations of the civil war between North and South
Mortars "Dictator" in the battles of the North against the South
Shuvalov's "secret howitzer"
North and South: smooth-bore and rifled guns
US Civil War ammunition
The most popular caliber of the North and South
Cannons of Tredegar and the Noble Brothers
Cannons of Brooke and Viard
James and Sawyer cannons: rifled versus smoothbore
"The parrot gun." Man and his instrument
Faceted bore gun

Ctrl Enter
Noticed oshЫbku Highlight text and press. Ctrl + Enter
We are
General Burnside's carbine: the first with a metal cartridge6X49 cartridge and SVK, SVK-S, TKB-0145K sniper rifles
36 comments
Information
Dear reader, to leave comments on the publication, you must to register.