Cannons of Tredegar and the Noble Brothers 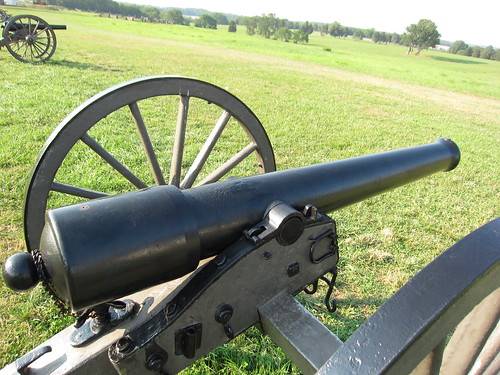 We go to Richmond with a dark blue wall
Stripes and stars we carry in front of us,
John Brown’s body lies in the damp earth,
But his soul is calling us into battle!
The national anthem of the republic, USA, 1861

Weapon from museums. It is generally accepted here that the southern states during the years of the war of the North and the South were so poor and unhappy in technical terms that it was impossible to say something, since "all the heavy industry was concentrated in the North." However, this is not so, or rather, not quite so. For example, in Richmond, Virginia, the city that was the capital of the Confederation, there was a metallurgical plant Tredegar Iron Works, opened there back in 1837. By 1860, it was already the third largest enterprise of its kind in the United States. So during the Civil War there was someone to produce for the army and metal, and artillery, and shells. Another thing is that the metal itself was missing. Moreover, when the city was to be occupied by the troops of the northerners in 1865, it escaped destruction and then successfully worked back in the late XNUMXth century and then in the first half of the XNUMXth century, and even during both world wars. Well, today a museum is open in it. Here we must give Americans their due: they can make a museum out of everything, the main thing is that the object is old enough and has its history. In addition, there is also the office of the famous national park - Richmond National Battlefield Park. 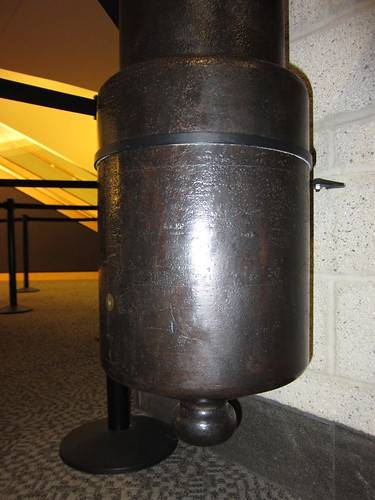 The breech of the 2,9-inch Parrott gun manufactured by the Tredegar factory from the Gettysburg Battle Museum 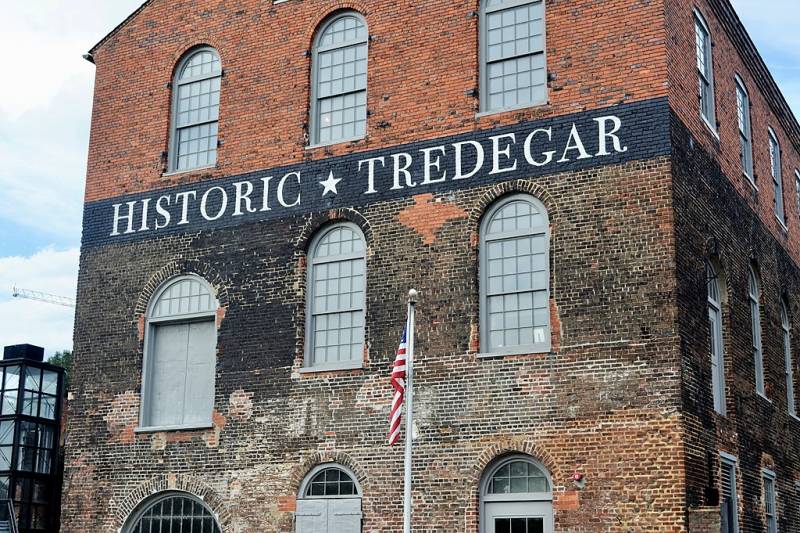 The building of the Tredegar Iron Works metallurgical plant that has survived to this day
It is interesting that already in 1841, which was soon after the opening, the owners of the plant gave it to the management of a young (28-year-old) engineer Joseph Reed Anderson, who coped with this difficult task as well as possible. Moreover, he managed so well that already by 1848 he became a co-owner of this enterprise and ensured that his plant began to receive orders from the federal government. 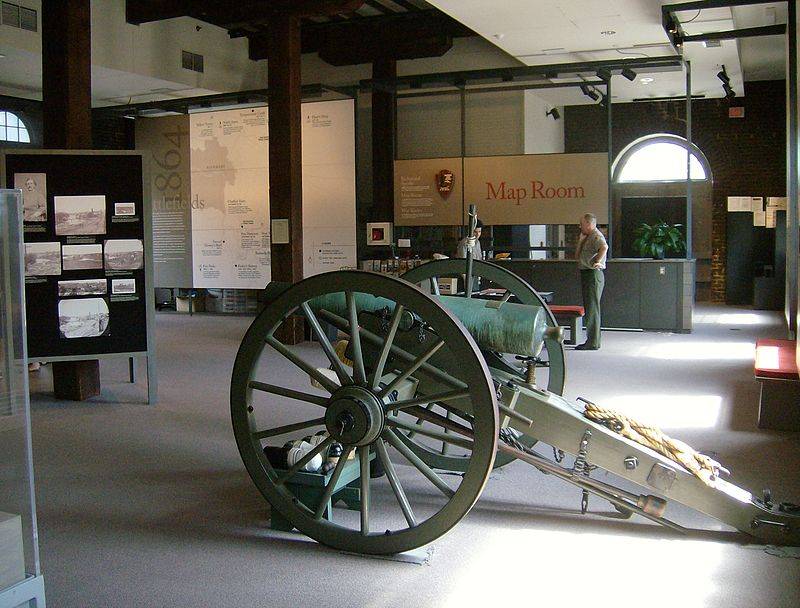 The Tredegar Cannon at the Richmond National Battlefield Park office
In addition, Anderson acted very cleverly. The famous Scarlett O'Hara began to hire convicts to lower the cost of production of his sawmills, and he used the labor of slaves, and very efficiently. So, by 1861, almost half of the factory workers, and about 900 people worked there, were slaves, including even craftsmen! And in 1860, a certain Robert Archer, a former relative of Anderson, also took part in this business, invested his money in the plant and became one of the largest metal manufacturing enterprises in the USA. And for KSA, this enterprise was definitely the largest. 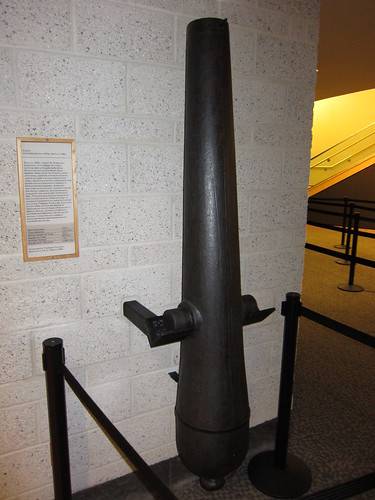 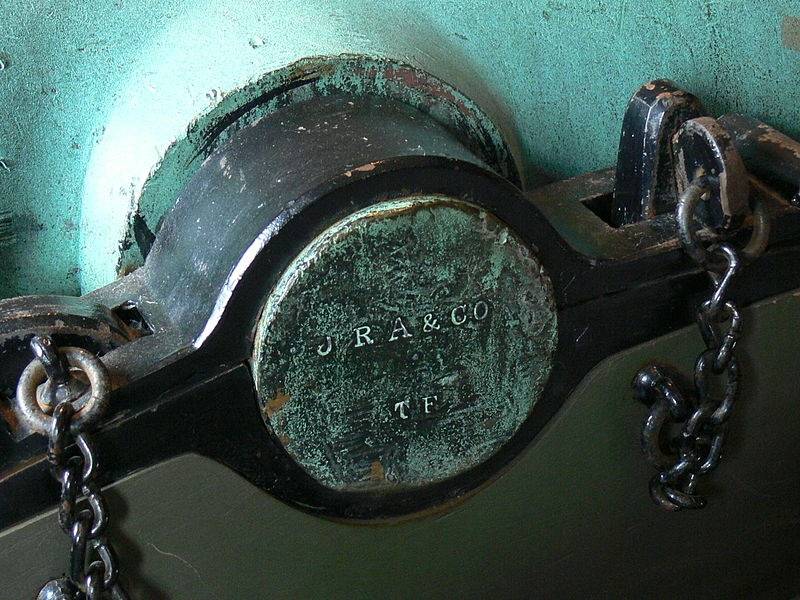 The trunnion of a Tredegar cannon with the JR Anderson & Company mark, and you shouldn't be surprised
Interestingly, this enterprise produced a variety of artillery pieces. So, in the documents for the supply of the army appear 6-pound bronze rifled guns and 12-pound bronze smooth-bore howitzers. And the guns were sold ... by weight, at a price of 55 cents per pound. Again, if you look at the documents, you get a pretty interesting thing: while the weight of howitzers is within tolerance, 6-pound rifled guns weighed forty pounds more than required by the regulations. 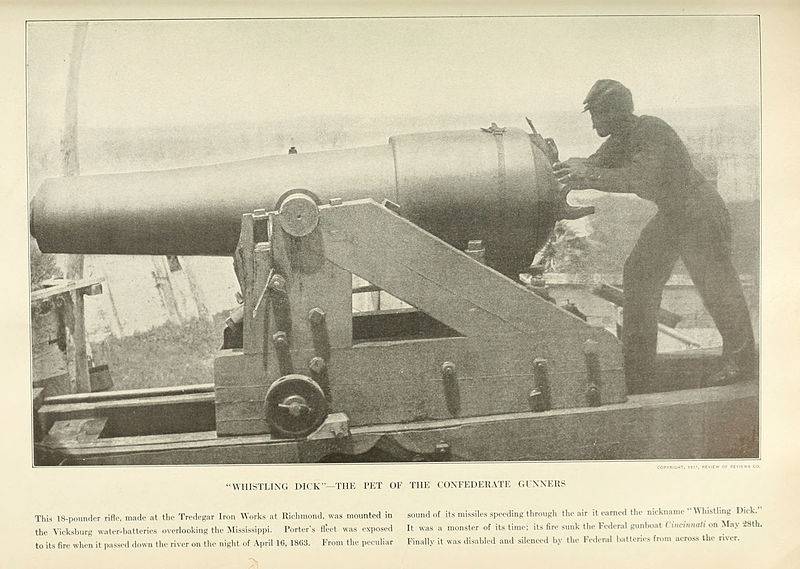 He let out the Tredegar plant and such heavy weapons ...
In the United States, there is a national registry of surviving artillery pieces of the Civil War era, which records all guns that have survived to this day, their locations and the numbers and hallmarks that have survived on them. It was possible to find out that the Tredegar plant throughout the war supplied the southerners' armies with a variety of artillery guns, primarily 3-inch iron field guns, and 6-pound rifled bronze guns, and smooth-bore guns. 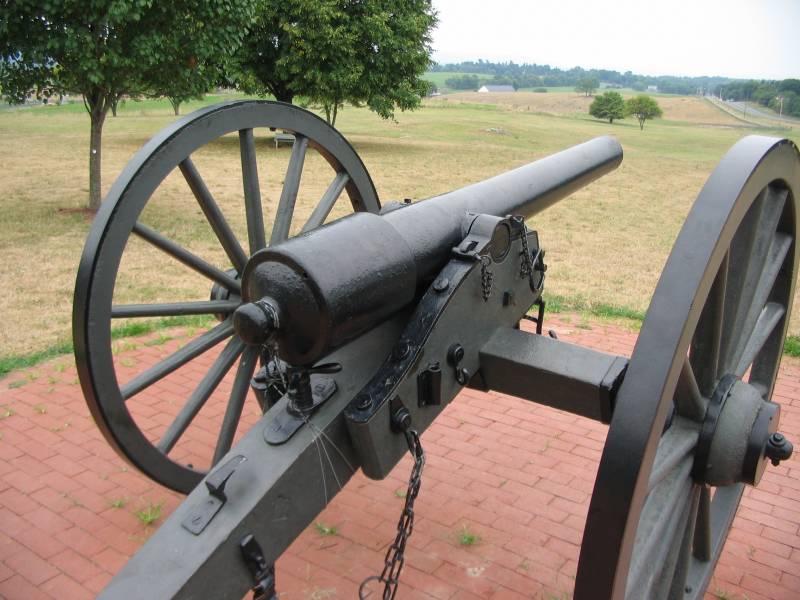 The design of the guns changed over time. So, for example, the 3-inch gun, manufactured in March 1862, and currently located in Gettysburg, does not have the muzzle amplification characteristic of earlier guns
Another enterprise producing artillery for the southern state army was the Noble Brothers Factory from Rome, Georgia — Noble Brothers Foundry. This foundry was built by James Noble Sr. and his six sons (William, James Jr., Stephen, George, Samuel and John) around 1855. Around the same time, the brothers ordered a huge lathe in Pennsylvania. And it was so big that it was first delivered first by boat to Mobile, Alabama, from where it was transported by a river ship up the Kusa River to the first waterfall. Here it was disassembled, and already in carts delivered to carts in Rome. 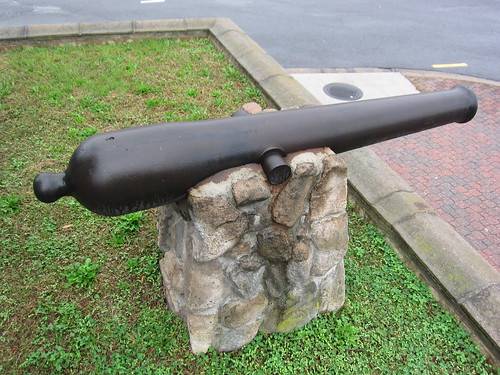 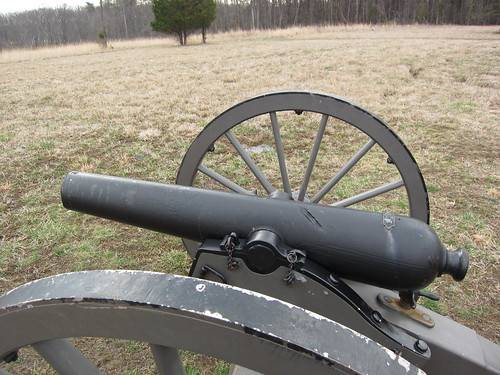 Late 3-inch Noble Brothers Foundry Cannon
In 1862, in Cedar Bluff, a neighboring town with Rome, the brothers built a blast furnace to have their own metal on hand. The Noble Brothers venture produced mainly copies of 10 and 20 pound Parrott guns, which diverged from here across all the batteries of the armies of the South. The importance that the southerners gave to this production is evidenced by the fact that all six Noble brothers were exempted from draft in the army. Confederation President Jefferson Davis on this occasion said: "... the six Noble brothers are exempted from the draft because we have a lot of people who can fight, but few who cannons." True, the production of guns in 1864 was suspended due to claims to their quality. 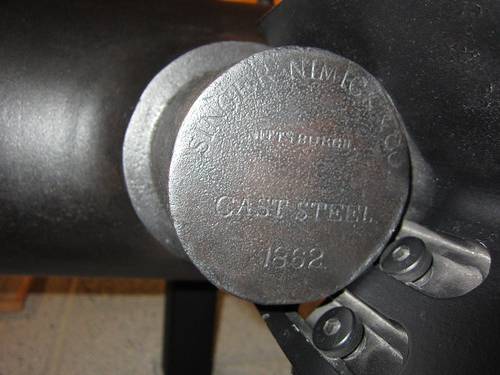 Trunnion of a 3-inch cannon from the Gettysburg Museum. Interestingly, this gun was produced by Singer, Nimick & Company in Pittsburgh. Thus, later they began to produce sewing machines ... 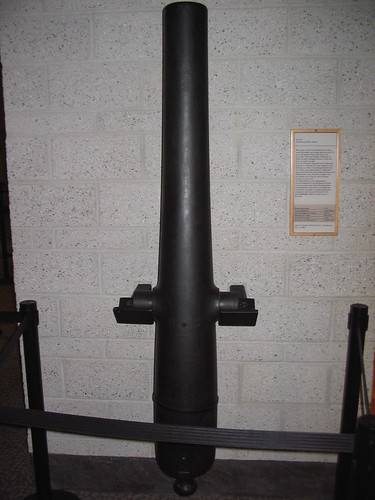 And this instrument itself ...
In November 1864, the Union’s troops burned down the Noble brothers factory, and on their wonderful lathe (and it has survived to our time!) At a height of 10 feet, traces from the sledgehammers with which the northerners tried to destroy it were still visible. But ... none of this came of it. The massive machine had a steam drive, then an electric one and worked ... almost until the mid-1960s! 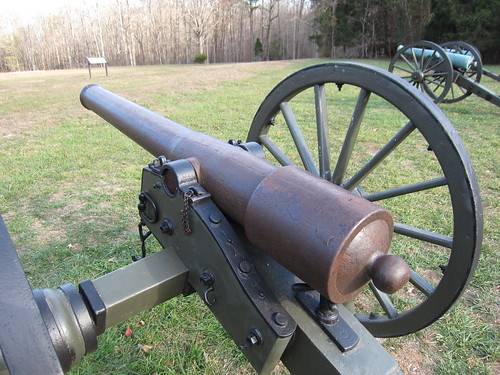 10 lb. gun released by the Macon Arsenal
The city of Macon also had an ironworks, which the southerners began to use as an arsenal and produce ammunition there, as well as 6- and 12-pound guns “Napoleon” and “Parrot”. Functioned until April 1865, when it was destroyed during a raid by General James Wilson. In total, about 90 guns of various calibres were released here. 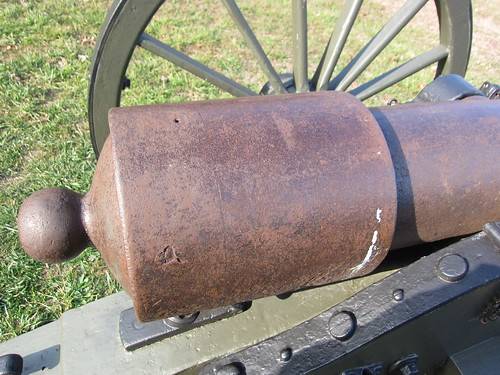 And this is her breech ...
In total, for the Confederation, the Noble Brothers enterprise produced about 60 guns, 24 of which were 3-inch iron guns, which very clearly shows production problems in the southerners. Yes, they could make weapons and ammunition, but they simply had enough raw materials for this! 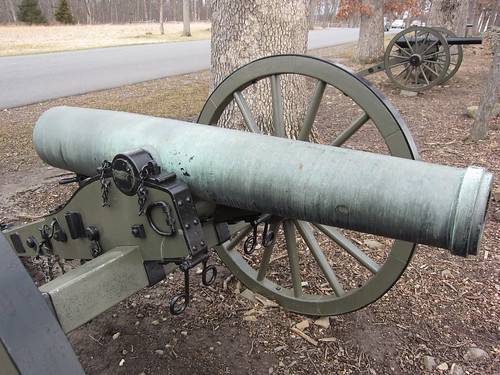 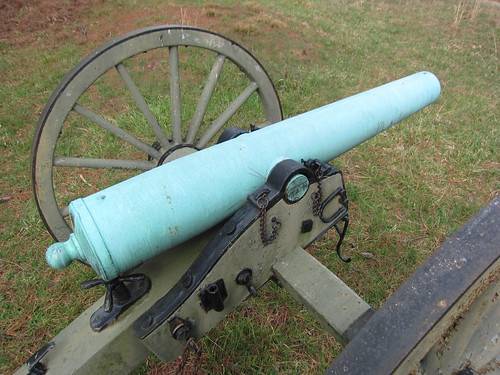 Quinby & Robinson 3-inch Cannon
In the spring of 1862, the Memphis-based firm Quinby & Robinson also set out to become a major cannon manufacturer for the Confederation. The firm began manufacturing weapons in April and eventually delivered nearly 80 guns to the Confederation. These were mainly 6- and 12-pounder field howitzers, and the company became one of the first manufacturers of "Napoleonic" guns for the Confederate army. And in February of that year, Major William Richardson Hunt approved the receipt of more than $ 2500 of ammunition from the company. But this enterprise also lacked metal. It got to the point that rifled bronze guns with worn-out cutting were simply melted into smooth-bore Napoleons in order to have at least some tools. 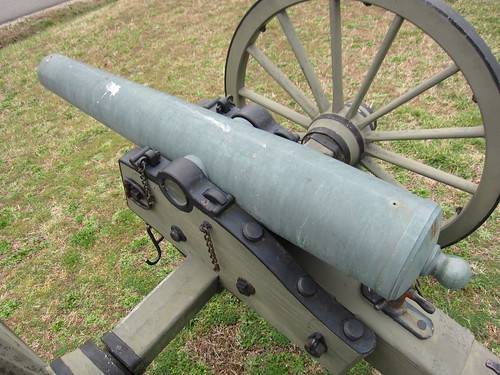 3-inch cannon from AB Reading & Brother
Remember AB Reading & Brother in Vicksburg, Mississippi. There, businessman Abram Brich Reading, along with his brother, set up a foundry and an engineering plant by the river. The firm produced boilers and steam engines for steamers and machine tools for light industry. Shortly after the outbreak of the war, the company switched to military products. But later that year, the firm rented out most of its equipment to an arsenal in Atlanta and stopped making its own cannons. However, between December 1861 and May 1862, the company produced 45 guns with its own markings. They were all bronze field 6-pound, 12-pound and 3-inch rifled guns. Moreover, at least fourteen 3-inch ones were delivered. 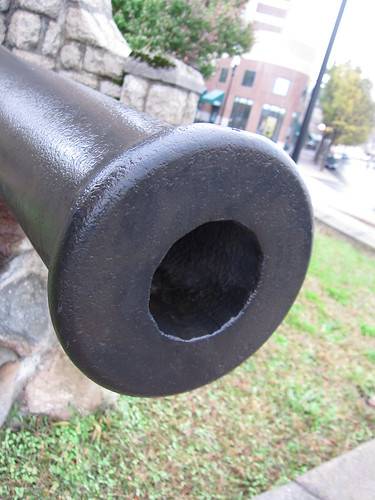 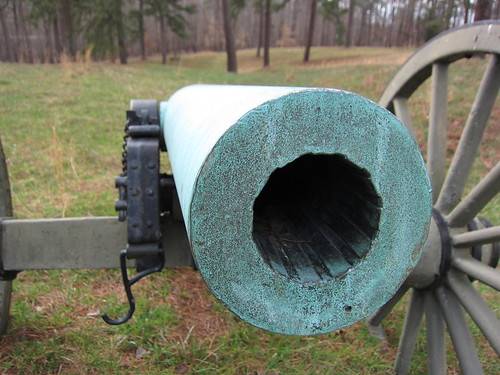 Muzzle section of later guns
Some of the guns that went to the North and South from the pre-war era were not modernized due to their specificity. We are talking about 12-pound mountain howitzers, which had a bronze barrel and arranged so that they could be transported both on a gun carriage and in packs, which, in fact (and even weight!), Mountain guns and howitzers are different from all others. 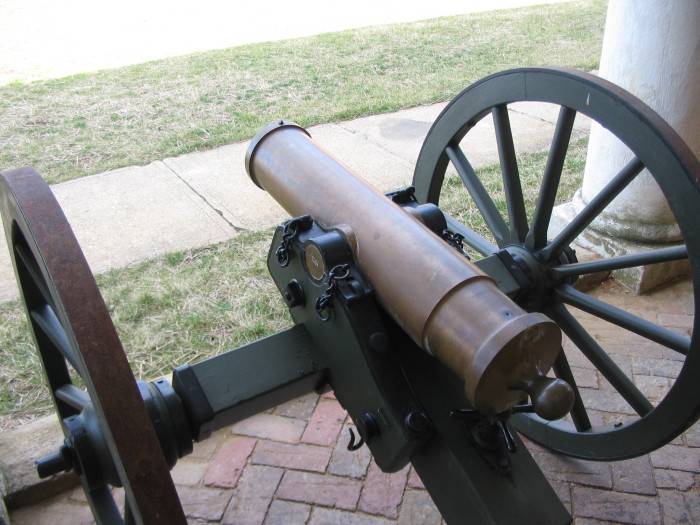 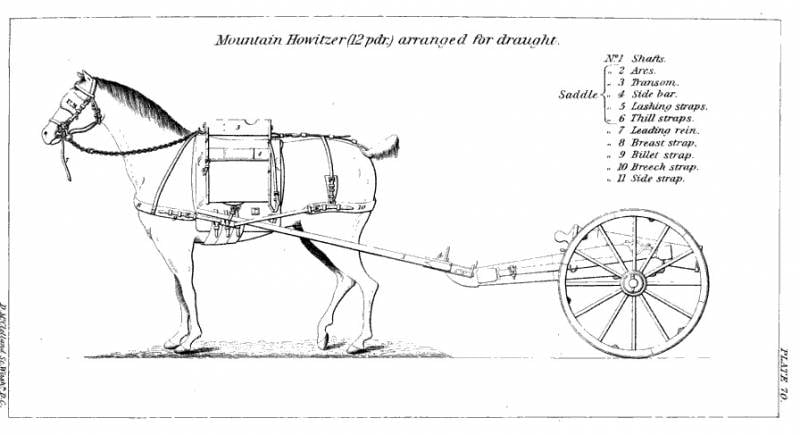 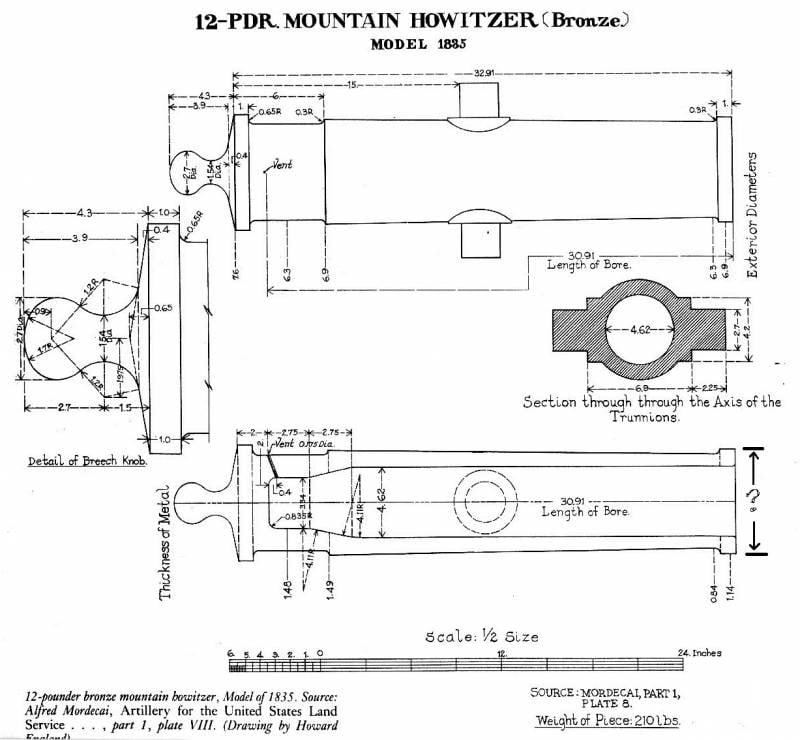 Schematic of the 12 Mountain Howitzer Model 1835
Well, some artillery guns were completely in the States by accident. So, for example, the Austrian 3,75-inch rifled howitzer hit the land of America. A plaque attached to her pedestal reports that it is an “Austrian 6-pound rifled howitzer” and that it was captured on the Columbia vessel on August 3, 1862. The Colombia was a 500-ton steamboat and was a typical ship of that time - the “blockade breaker”. She was captured by the northerners after a six-hour pursuit at sea 75 miles north of the Bahamian island of Abasco. 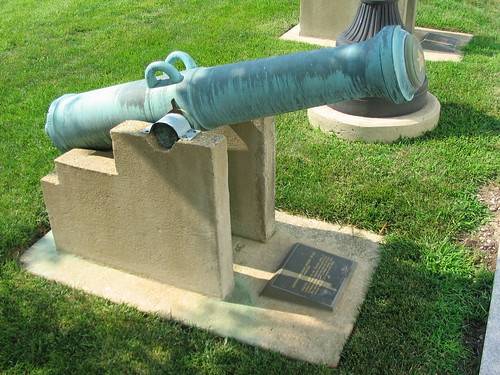 Austrian 3,75-inch rifled howitzer
The ship was loaded with ammunition, rifles, iron, blankets, and other supplies and weapons, including two 24-pound brass rifled guns. On one of them there is an inscription: "Vienna 1852", on the other - "Vienna 1854". The cannons are preserved, and although their trunks are clogged with wooden plugs, it is clear that the cutting on them is deeper than the one used in the USA, but the barrel design itself is more traditional. So the captains (blockers of the blockade) from the northerners like Rhett Butler from Gone With the Wind carried not only ribbons and lace to the southerners, but also brought serious help to the United States, delivering the materials he needed and even weapons in exchange for the South.

Author:
Vyacheslav Shpakovsky
Articles from this series:
Cannons of Brooke and Viard
James and Sawyer cannons: rifled versus smoothbore
"The parrot gun." Man and his instrument
Faceted bore gun