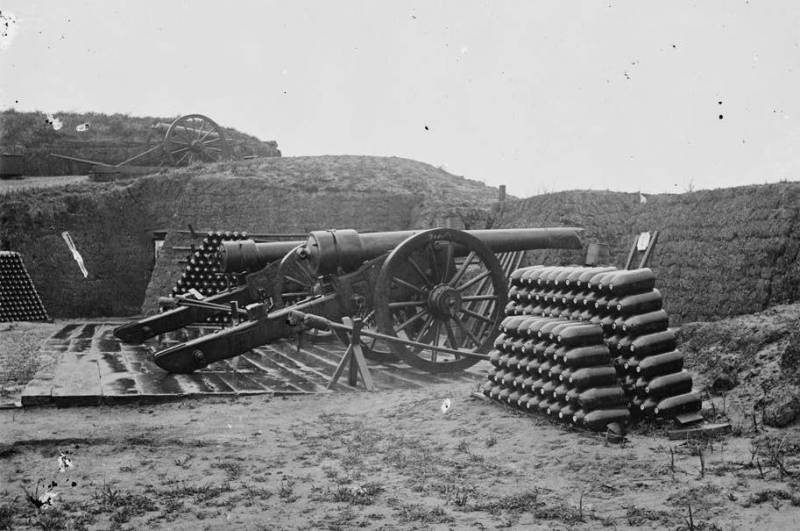 Parrott's cannons and shells for them

As long as the Union was true to principles, we were brothers;
but as soon as these traitors from the North encroached on the sacred, on our rights,
we proudly raised our sweetheart blue flag with a single star.
Harry McCarthy. Cute heart blue flag

Weapon from museums. Articles on the topic of artillery armament of the armies of the North and South of the era of the Civil War in the United States definitely aroused the interest of the VO audience. Many offered options for its continuation, directly pointed to interesting systems that appeared at that crucial time.

The tool does not exist by itself. He always needs ammunition. Although some articles of the cycle talked about some of them, it is obvious that some generalizing article on this topic is simply necessary. And since it is necessary, then it is time for her to be born! 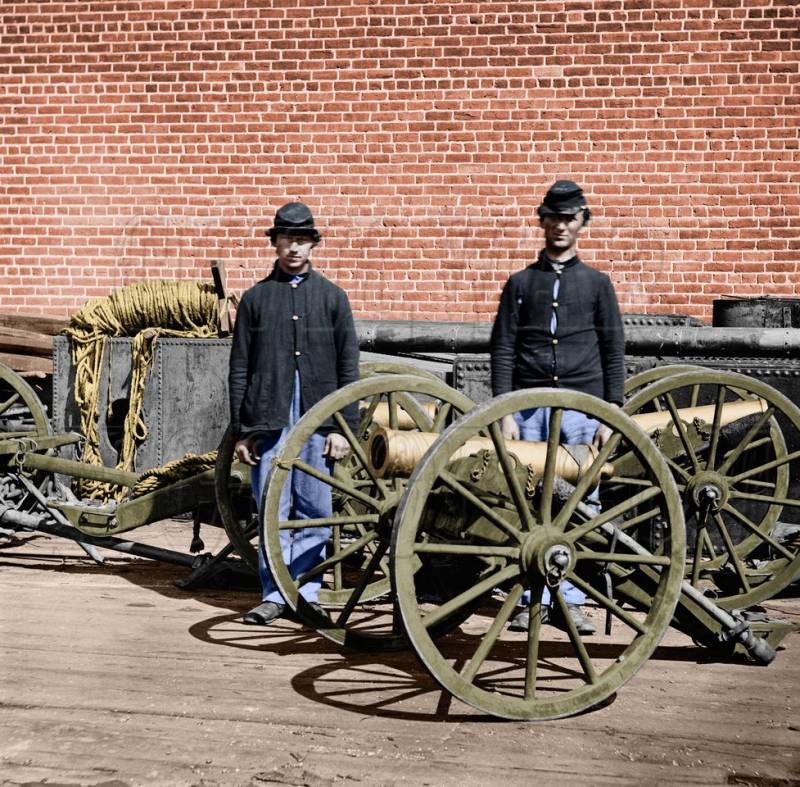 Such short mountain howitzers hardly needed rifled shells. They fired well with old grenades!
So, ammunition for guns of the transition period: from smoothbore "Napoleons" to the rifled guns of Whitworth, Parrott and Griffen.

This was the time when the new was rapidly advancing, although the goal of this "offensive" was the most barbaric - to kill as many people as possible and with greater efficiency than before. As you know, by 1861 smoothbore guns have reached perfection everywhere. The artillery crews were so trained that they fired one shot every 30 seconds. But the firing range of the most massive field guns at that time was relatively small, and the assortment of shells was small. 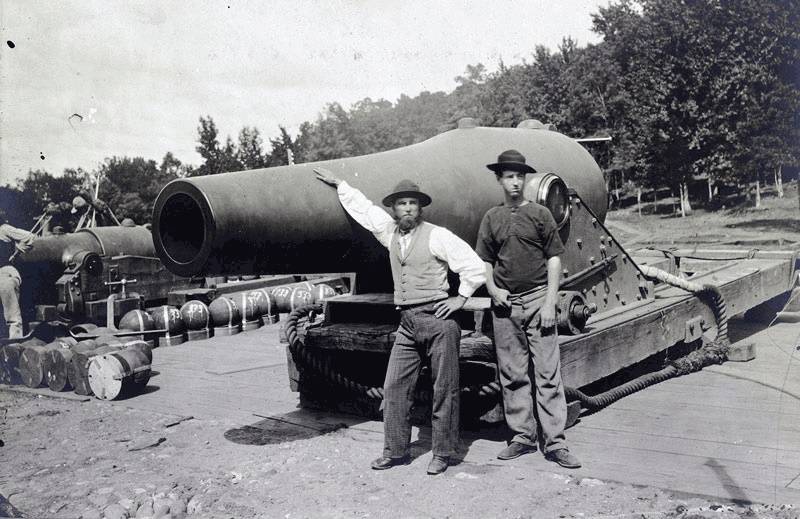 This photo shows very clearly how (with the help of three metal bands) the cast-iron cores were fastened on wooden pallets that played the role of a wad
They used solid cast iron cannonballs, which were fired at fortifications and masses of cavalry and infantry, explosive grenades - the same "cannonballs", but cast hollow and having a hole for an ignition tube, and buckshot - linen containers with bullets to hit the enemy at close range. As a rule, "bullets" (buckshot) were larger than rifle ones, and the larger the larger the gun caliber, the larger. The largest guns used grenade buckshot, although it was expensive - bundles of small-sized grenades with wicks, which first hit the enemy with shock force, and then burst under his feet. But the “pleasure” was expensive. It was difficult to tie them into a bunch of several rows of such buckshot. In addition, 40-mm grenades in 90-mm guns in a row there were only four. They were stacked in three rows, that is, out of the trunk flew ... only 12 buckshots. 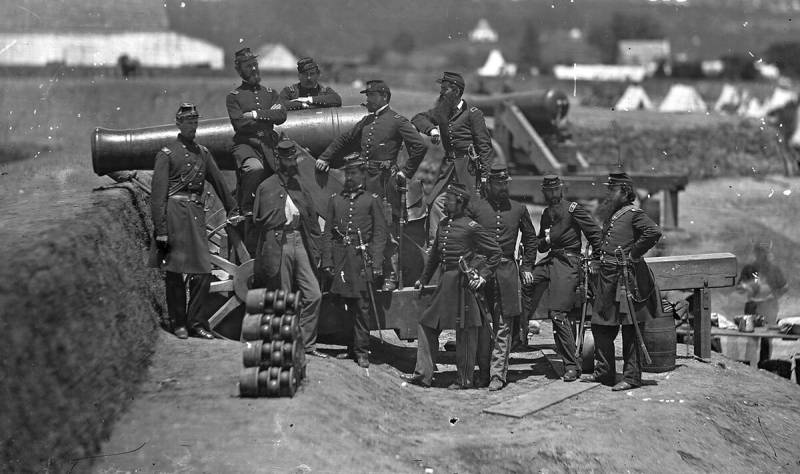 And here you can clearly see buckshot shots for large-caliber guns. The pomegranate buckshot also looked approximately the same.
Explosive cores also had disadvantages. They gave an unequal amount of shards. For example, a cast-iron grenade once exploded under the belly of the horse Alcides, on which sat the legendary cavalry girl Nadezhda Durova and ... at least that! She heard the whistling of fragments, but not one hit either her or her horse, although the goal was not at all small! From hitting a stone wall, grenades often cracked, but did not have time to explode. They came up with the idea of ​​casting them with walls of different thicknesses, but for such nuclei, flying with the heavier part forward, only the thin-walled rear part was torn into fragments. They returned to the equal-walled grenades, but "with the tide", that is, in one place the wall was made thicker. And it worked, in the sense that the impact of such grenades increased, but ... they became more difficult to cast and they required more metal. In a word, everywhere you throw, a wedge is everywhere! 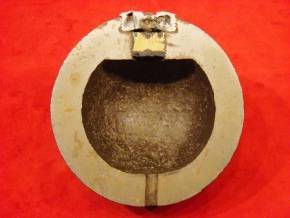 "Pomegranate with the tide"
That is why the very first rifled guns were received with such joy. The oblong shells, rotating in the air, flew farther, more precisely, hit harder, and, in addition, contained a larger powder charge, and also formed a more favorable fragmentation field. The whole question now was that the projectile would enter the rifled barrel easily, but back ... it would go out, rotating along the cuts made inside it. On large-caliber marine guns on the shells began to make protrusions-rifling, coinciding in profile with the rifling of the bore. But what was to be done with the shells of relatively small-caliber field guns?

However, the gunsmiths had to solve this problem a little earlier. On rifled guns! In them, round lead bullets at first had to be beaten with hammers (because of what the nipples were called “shotguns with tight bullet driving”), but then Claude Mignet came up with his famous bullet and at once solved all the problems. That is, it was necessary to resolve the contradiction: the bullet should be easily charged and at the same time firmly enter the rifling. Now, exactly the same situation was repeated again: it was required to ensure easy loading of muzzle-loading guns and at the same time to ensure that the shells in them acquire rotation at the time of the shot. 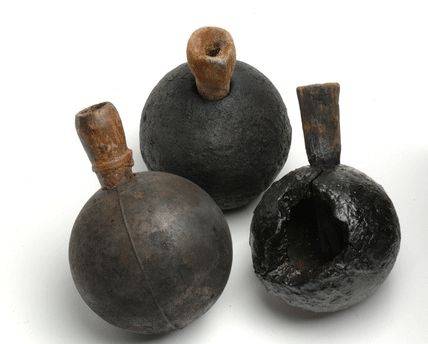 Traditional muzzle-loading spherical grenades
Many designers have worked on this problem in the United States, they solved it in different ways, but on the whole they achieved the desired results. It hardly makes sense to talk about oblong hexagonal-shaped shells for Whitworth guns a second time, but some other designs can be considered in more detail. 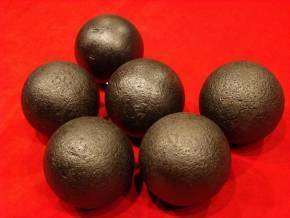 Cast Impact Cores
First of all, and with the least difficulty solved the issue of firing with buckshot. Now card bullets in the form of lead or iron balls were loaded into the likeness of a tin can (hence its name - "canister") along with wood sawdust. Therefore, the rifling bullets did not damage the barrel. True, the peculiarity of such a shot was the color of the smoke, which, thanks to the sawdust, became bright yellow, and its cloud was even larger than when fired by a grenade. It was believed that if the enemy is 100-400 yards from the artillery gun, the grape-shot would be most effective in this case. But such “packages” were nevertheless more expensive than the traditional ones used for smooth-bore guns, which also had no risk of damage to the cuts when firing traditionally packaged buckshot.

For spherical grenades of muzzle-loading cannons, firstly, an effective grater igniter was invented, and secondly, ready-made round bullets (Henry Shrapnel's invention) began to be added to their powder filling, which increased their striking power, especially if they exploded in the air above heads of enemy soldiers. 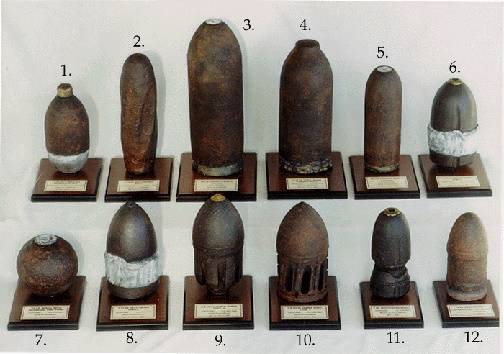 A - Shankle's shell and E - James's shell
At Shankl, the projectile had a teardrop shape with developed fins in the tail. A leading cylindrical part (pallet) made of papier-mâché (pressed paper) was put on it, and in order to prevent it from getting wet, a thin zinc shirt covered it on top. When fired, the gases burst open the paper pallet, it crashed into the rifling and led a projectile over them. Simple and cheap! Look at the cross-section of the Shankle and James shells (the part of the shell that expands with gases when fired is highlighted in red). James' round resembled a spherical bomb with a metal tray attached. He was also bursting with gas pressure during a shot, which was achieved by its rotation in the barrel when moving along rifles.

Hotchkiss shell in the context - C, and a shell with a lead shell - G
Hotchkiss shells (C) consisted of three parts. The front part contained a fuse and an explosive charge and was separated from the lower base by a conical ring around the outside. The shot forced these two iron parts to join together, while they burst out an intermediate lead or zinc ring that went into the grooves. There have been attempts (G) to cover the entire surface of the projectile with lead and push it into the barrel while cutting the threads. But the rifling was quickly leaded, and it was difficult to clean them, so such shells were not successful. 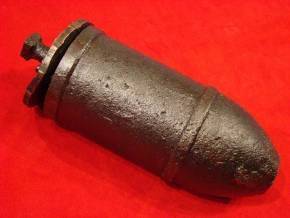 In the southern states, shells were used with the so-called Tennessee pan, at the bottom of which a copper "plate" was attached, expanding by gas pressure and entering the barrel rifling 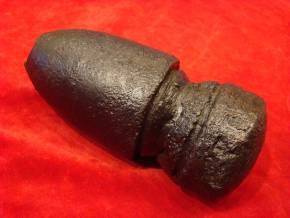 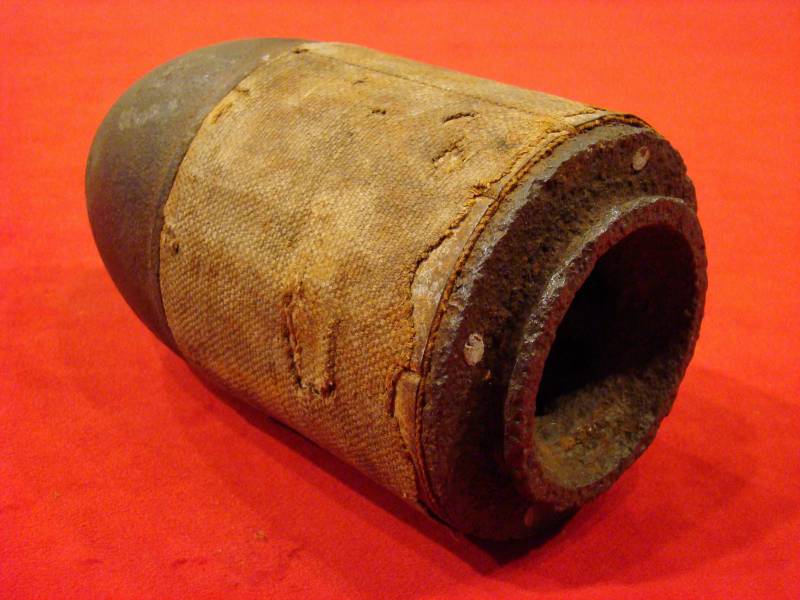 James' 3,8-inch projectile (large). You can well see the burlap shell covering its back. The principle of operation was the same as that of the Shankle projectile.
As for the Parrott and Reed shells (two almost identical designs from two different manufacturers), they used a soft metal cup, usually brass, fixed at the base of the shell, which was expanded by gas pressure and pressed into the grooves.

Author:
Vyacheslav Shpakovsky
Articles from this series:
The most popular caliber of the North and South
Cannons of Tredegar and the Noble Brothers
Cannons of Brooke and Viard
James and Sawyer cannons: rifled versus smoothbore
"The parrot gun." Man and his instrument
Faceted bore gun