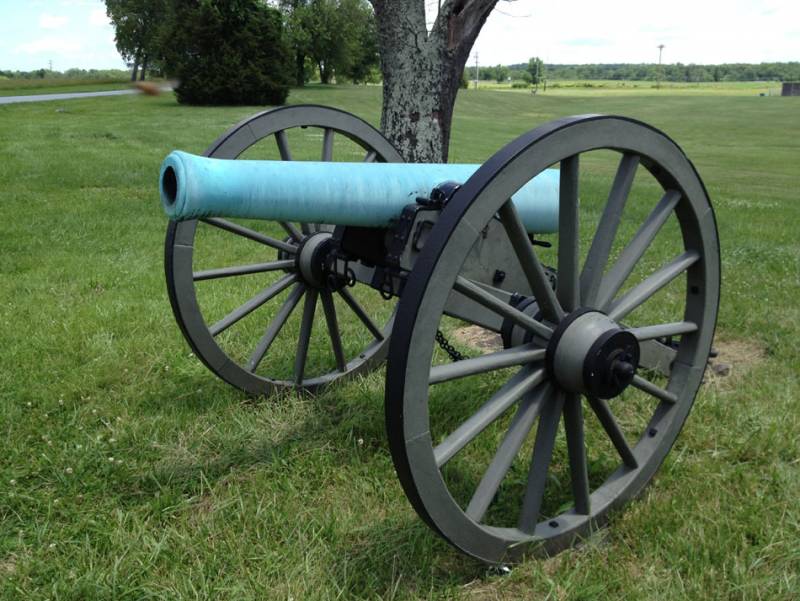 A stream flows in greenery
And next to the monument to the heroes.
May glory weave them a wreath,
Sons are proud of their peace.
May the spirit of the fighters be eternal
Freedom bequeathed to us.
May the bold fathers banner
Spares both time and nature.
Ralph Waldo Emerson. Concord anthem, performed on July 4, 1837 at the opening of the monument in honor of the battle. Translation by I. Kopostinsky

Weapon from museums. In the United States there are many monuments erected in memory of the Civil War. It has long been noticed that if they portray a soldier, then they look kind of not too fighting, but rather tired. A soldier is standing, leaning on his gun, all the details of the uniform are one on one in place, but the pose is such that he is at the same time resting, and not running, say, in the attack with a rifle at the ready. There are no naked characters with piles of muscles either. All dressed as expected. But on the other hand, an amazing number of different cannons were exhibited there as monuments, not just one, but often whole batteries. And at the same time the most diverse! Last time we talked about the Parrot cast-iron guns, today we will continue our story about the US Civil War guns: we will talk about both rifled and smooth-bore guns used by the warring parties. 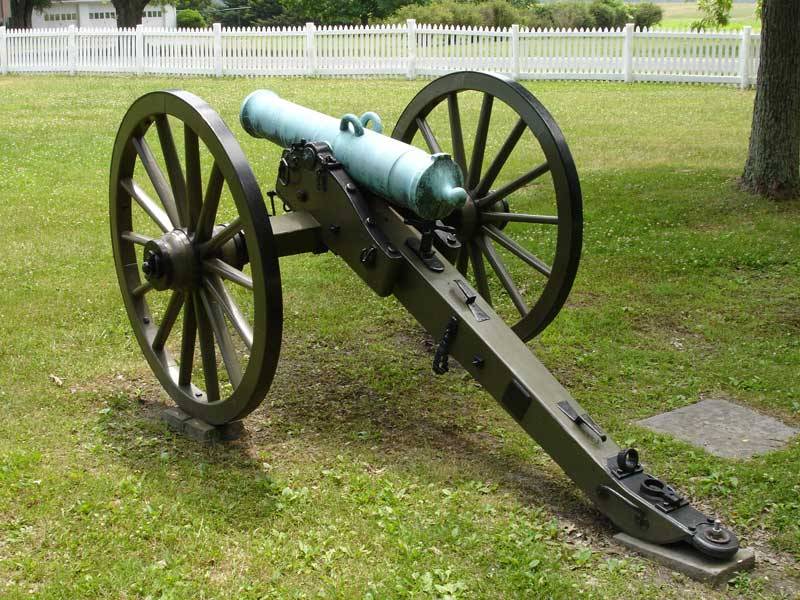 Austrian-made 24-pound howitzer purchased by the Confederation in Europe. Its trunk was lighter and shorter than the trunks of 24-pound federal howitzers
To begin with, the most common artillery piece for both northerners and southerners at the beginning of the war was the smooth-bore muzzle-loading bronze gun “Napoleon”, so named because it was made according to the French model. She shot round cores, wick bombs, or buckshot, and charged from the barrel. The advantage of these guns was their high rate of fire. So, a trained calculation could produce one shot every 30 seconds. "Napoleons" were used in two types: light six-pound caliber 3,67 inches and heavier 12-pound caliber 4,62 inches. Field carriage was used in the sample of 1841. 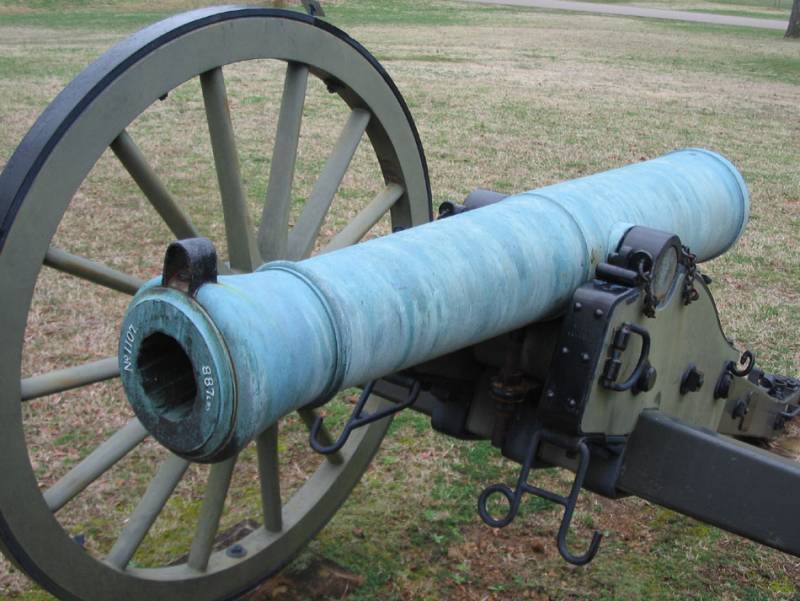 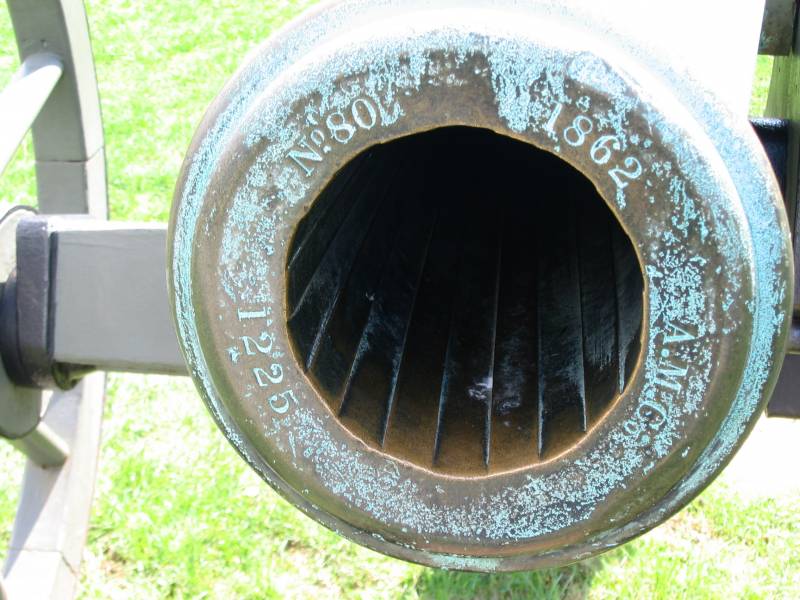 Rifling in the trunk
It is clear that in 1861 such guns looked like a real anachronism. And in order to modernize them, an engineer from the state of Rhode Island Charles T. James (1805–1862) came up with a proposal to turn these guns from smooth-bore into rifled, for which to make rifles in their trunks. Similarly, several hundred guns were modernized, as a result of which the range and accuracy of fire from them significantly increased. In addition, now it became possible to shoot cylindrical shells of Parrot and James himself from them. The first, cylindrical, had a copper “plate” in the bottom part, which crashed into rifling. The latter resembled a pointed egg, but outwardly looked like the most ordinary pointed cylindrical shells thanks to the cylindrical nozzle put on their bottom part, hollow inside. When fired, gases pressed its walls into rifling, and the shell, spinning, flew out of the barrel. It only turned out that bronze was still too soft metal, and when firing, the rifling of such guns pretty quickly ground. 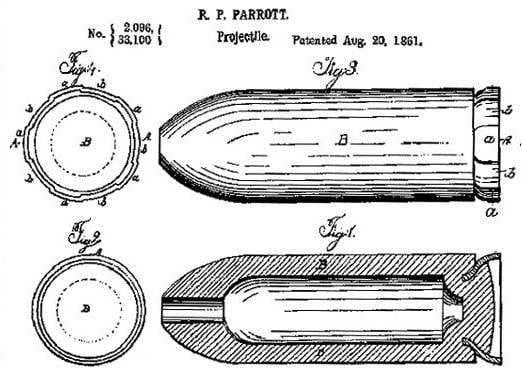 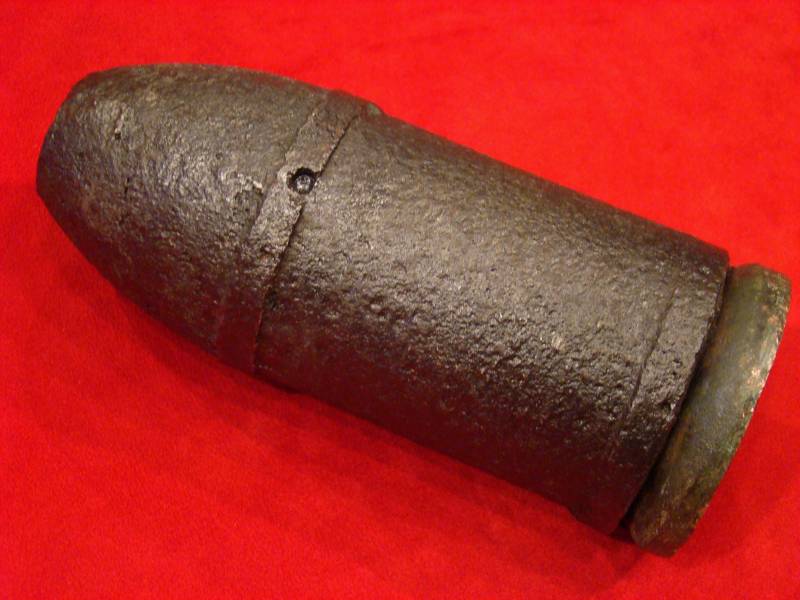 Parrot shell. Appearance
Nevertheless, the northerners liked the idea, and they began not only to drill old Napoleons, but also to cast entirely new 14-pound James long-barrel rifled guns from bronze, which also found application in the civil war.

It should be noted that Charles T. James developed a series of muzzle-loading rifled guns named after him. True, American historians such as Warren Ripley and James Hazlett believe that the term "James’s gun" only applies to 3,8-inch (97 mm) caliber artillery guns for firing shells of its own design and that it cannot refer to 3,67-inch (93 mm) smooth-bore trunks, which were cut to fire with James shells or cannons of other calibers converted by his method. 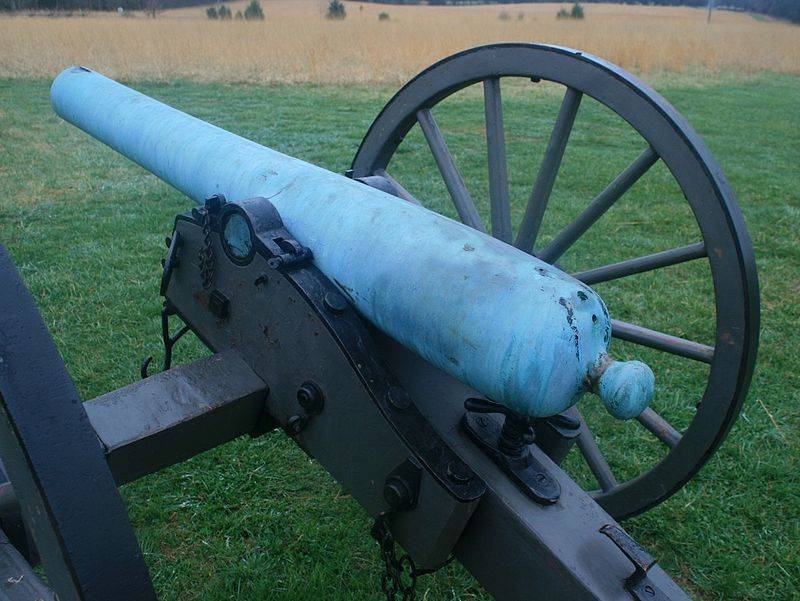 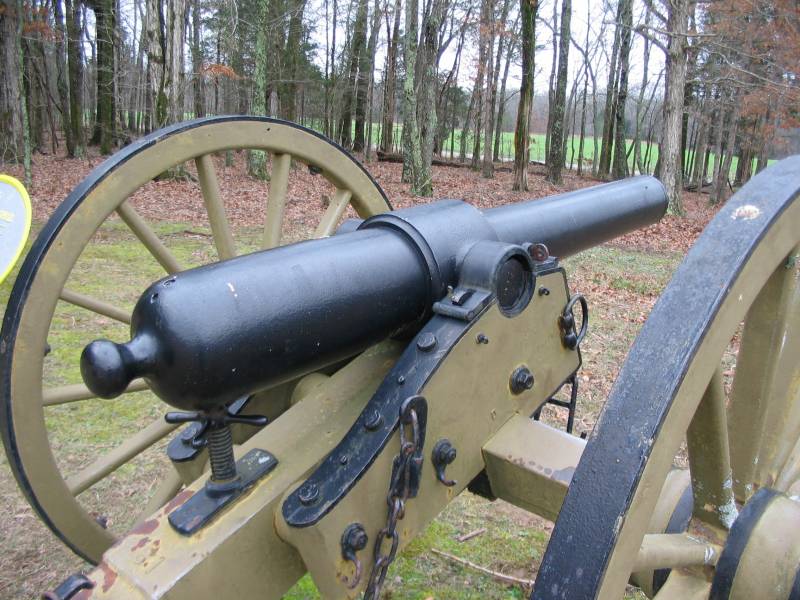 James 14 pound steel gun
As already noted here, at the beginning of the war, many 6-pound (2,72 kg) bronze smooth-bore guns were used, in which rifles were then made, and the caliber became 3,67 inches (93 mm). They are classified as “6-pound rifled guns” or “12-pound (5,44 kg) James rifled guns”. Well, the drilling of trunks was also practiced to eliminate their wear, which was observed in smoothbore guns. The first type was usually called the "12 pound James gun", and the second, reamed, was the "14 pound James gun." 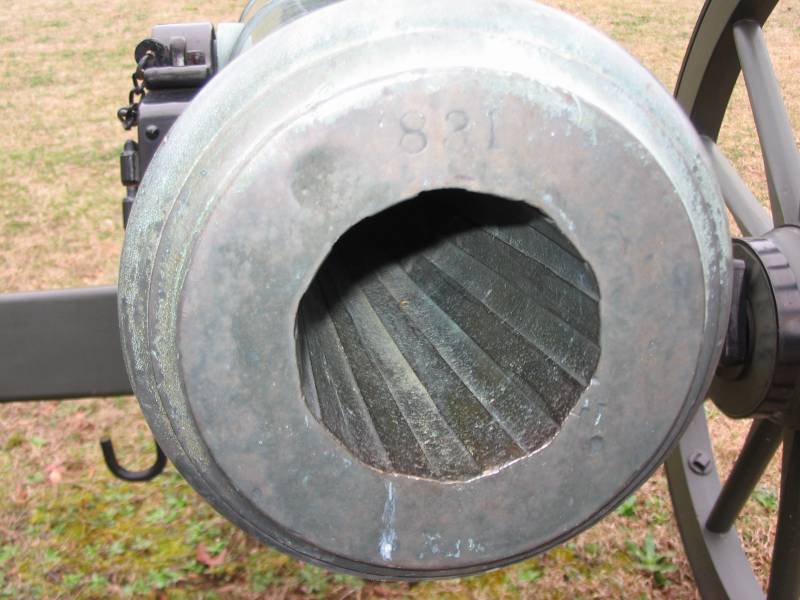 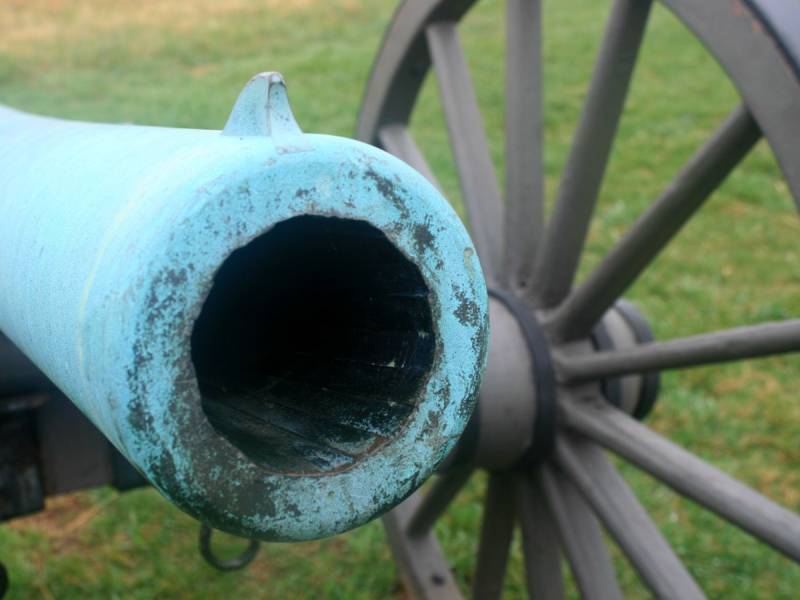 "A gun with a fly"
Charles James collaborated with Ames Manufacturing Company, Chicopee, Massachusetts, where he created numerous modifications to the 1841 model guns. The first five options were bronze, while the last was already iron. The inventor died in October 1862, having been mortally wounded as a result of an accident (the projectile fuse exploded in the hands of the worker next to whom he was standing), and with it the popularity of his guns and the shells created by him for them went away. The reason is the rapid grinding of rifled trunks of bronze guns. 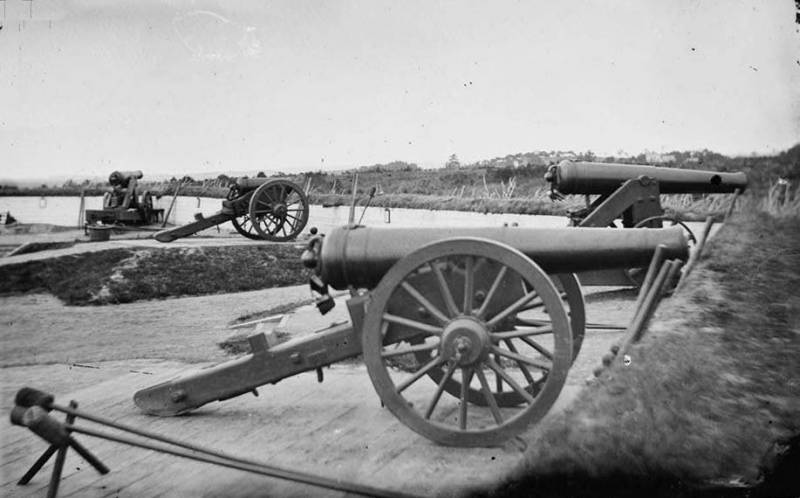 Two 1829 caliber 32-pound (14,5 kg) cannons converted to rifled by the James method
At the same time, its rifled guns worked well during the bombing of Fort Pulaski in April 1862, where they were used in conjunction with Parrott guns. The rapid fall of Fort Pulaski was probably the most significant contribution of the James system to the North-South war. Today, more than 150 14-pound James cannons have been preserved, many of which are located in the Shiloh National Military Park, Tennessee, including more than fifty 6-pound guns, bored to 3,8 inches, and rifled. 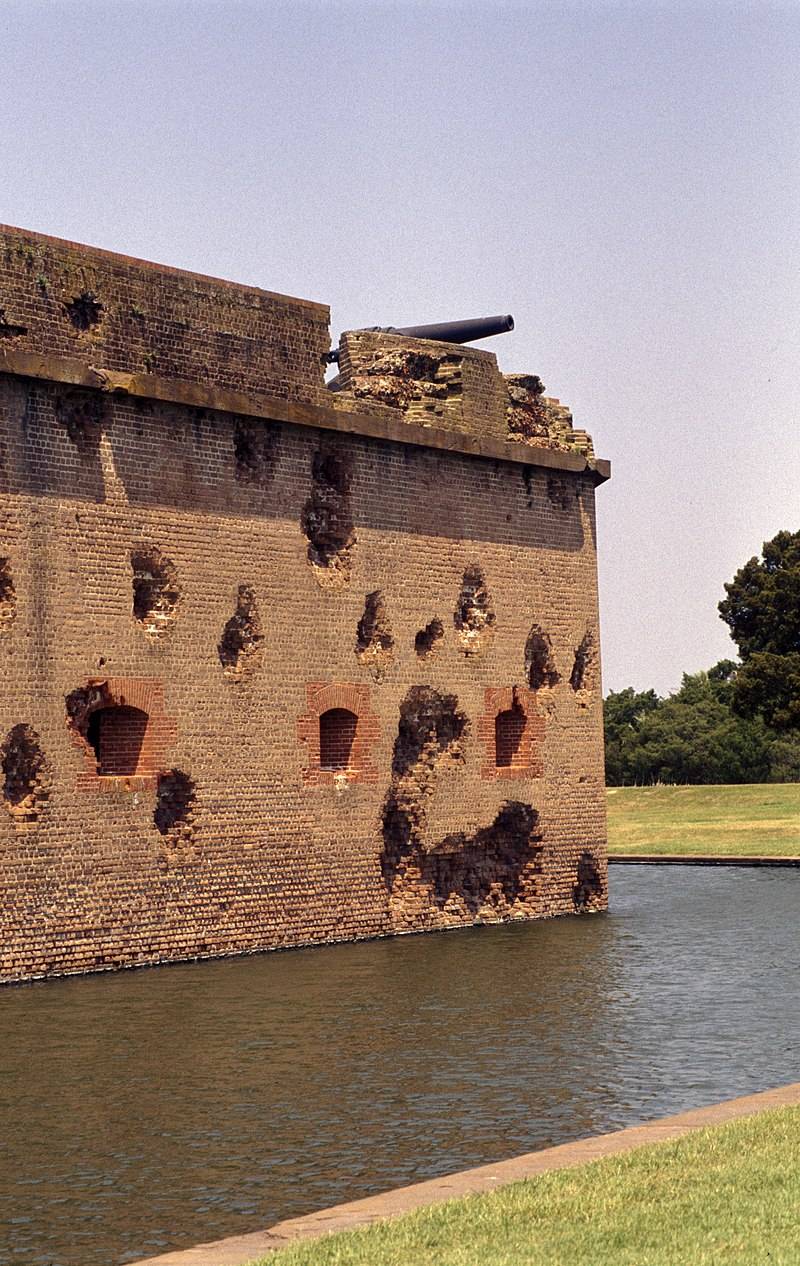 The wall of Fort Pulaski riddled with Parrot and James cannon shells
Several 14-pound James cannons are located at the Manassas National Battlefield Park in Virginia, where they participated in the First Battle of Bull Run as the first Rhode Island battery.

Another inventor who contributed to the development of artillery during the Civil War of the North and South was Silvanus Sawyer (1822–1895), who from childhood showed a penchant for invention. As a boy, he invented and made a reed organ. Due to poor health, he could not work on a farm, but learned to be a gunsmith, and in 1843, working in a Boston factory in a machine shop, he invented a rattan machine. More than a thousand dollars were spent trying to create such a machine, but Sawyer still succeeded, received a patent ("rattan cutting technique") and, together with his brother Joseph, opened an enterprise for the production of wicker chairs. It is said that his inventions revolutionized the production of wicker furniture, which after that had already moved from South India, China and the Netherlands to the United States. 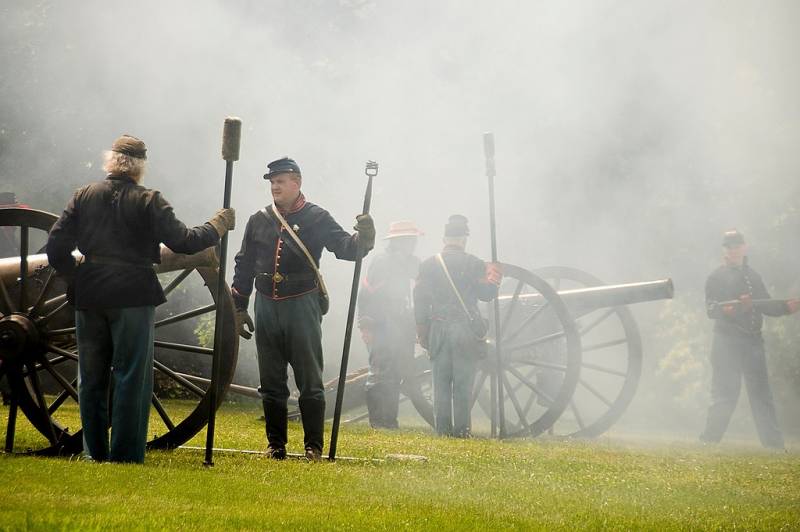 Battery in battle: modern reconstruction of the US Civil War battle
In the summer of 1853, he invented several shells for rifled guns, which were patented in 1855. The essence of the invention is the use of lead for cutting a projectile into rifling and preventing gas breakthrough during firing. It is interesting that at that time many inventors solved this problem in a very, very original way. For example, one Shankle proposed a drop-shaped projectile that had a tapered back and ribs on its surface. A special cap was put on top of this cone, made of papier-mâché, which, expanding due to the pressure of the powder gases, just went into the grooves of the barrel and, when fired, rotated by itself and rotated the projectile put on it, and then the cap flowing onto it simply blew off. 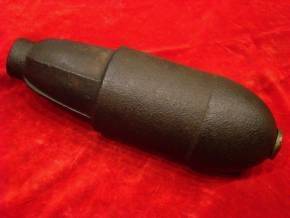 Shankle's shell
Due to its conical shape, the center of gravity of such a projectile was always ahead of the center of the axis, which is why its flight was as accurate as the flight of an arrow with a massive tip. But Shankle’s shell had a serious drawback: the “glass” often swelled from dampness, although later this was eliminated with the help of a special zinc shell, which was put on top of it.

And then Sawyer began to develop steel rifled guns and in 1857-1858, together with his brother Addison, he successfully tested a gun with a 24-pound (5,86-inch) barrel. Then, 42-pound rifled guns and shells for them in 1859 were tested at Fort Monroe. The Minister of War announced that the practicality of rifled guns and shells was finally well established. It was recommended that four field guns be made for testing in the army, but then the Civil War began in the United States. The first 9-pound cast steel artillery was ordered in June 1861 and was soon made. Then the 24-pound guns designed by Sawyer were installed in Newport News, Virginia, and one on the Rip Raps (Fort Calhoun, later Fort Wool) in the middle of 1861. The gun at Fort Wool was the Union’s only land weapon on the Hampton Roads, which could fire at a Confederate fort from three and a half miles away, which it did with great accuracy, causing terrible chaos there. Part of the Sawyer guns fell on the ships of the northerners, where they also showed themselves very well. 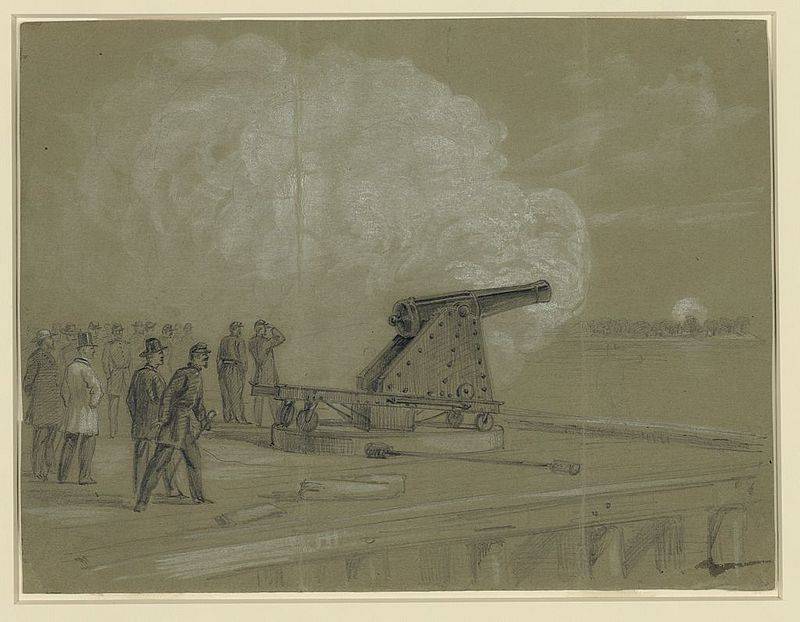 Test Sawyer guns at Fort Wool. "New York illustrated news", September 9, 1861, with. 289. Library of Congress)
Sawyer subsequently claimed that he was unjustly treated during the Civil War. His patents were used, but he never got anything for it. In the years 1864-1865 he built a special ammunition workshop, awaiting orders from the United States, Mexico, Brazil and Chile, but then the war ended and he had to be redesigned. 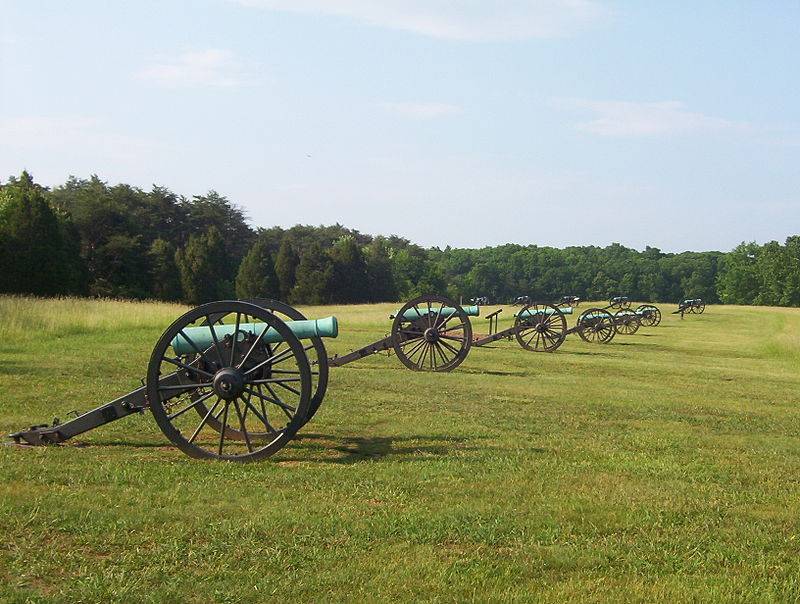 Guns National Park Battle of Manassas in Virginia
But he received patents for machine tool supports in 1867, a steam generator in 1868, a sewing machine in 1876, and a self-centering lathe in 1882. Subsequently, he began to manufacture tools for watchmakers, but soon left this business and became interested in agriculture. In the early 1890s, he developed a fertilizer production system by filtering the sewage in the city of Fitchburg. In general, Sawyer's contribution was very significant, because he developed at least five types of rifled artillery pieces and a full line of shells for them, including shells and buckshot, as well as shotgun charges. Well, the 9-pound Sawyer gun that was ordered to him in June 1861 was, in fact, the first rifled steel gun of the US Army. 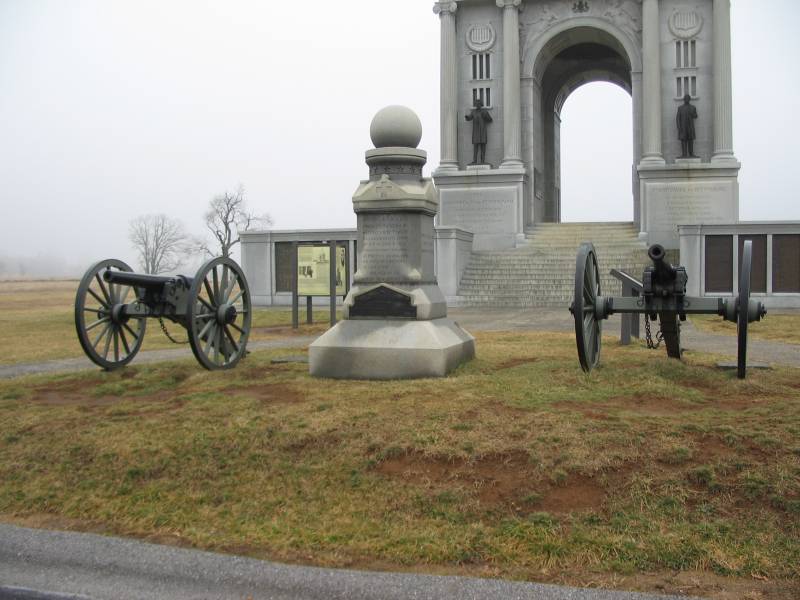 New Jersey, Gettysburg. The memorial at the scene of the battle. And the guns! As without them. So it’s easy for Americans to study history his artillery of that era. They have everything before their eyes!
One of its 24-pound guns has survived as a monument in Allegany, New York. Unusually, he has only two narrow rifling in the bore!