Cannons of Brooke and Viard 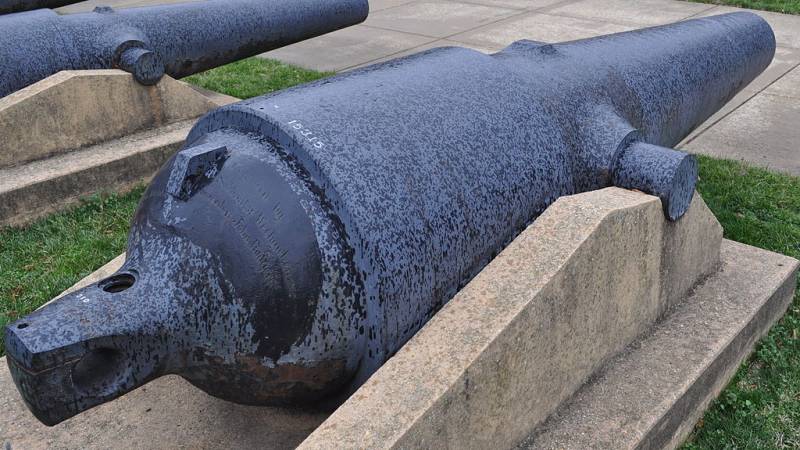 Weapon from museums. Interestingly, Parrott guns were fired not only in the North, but also in the South. True, if the southerners produced small-caliber guns, in general, quite successfully, then with larger ones they had very great difficulties. The thing was that in the South there simply weren’t enough sufficiently equipped factories where there was a powerful forging and pressing equipment necessary for the production of forged iron hoops of large diameter and large thickness, necessary for these guns and for pressing them on gun barrels. How to deal with this problem was invented by John Mercer Brook, a naval officer and inventor who proposed making bandages on trunks of several narrow rings or putting relatively thin tubes on one trunk - one on top of the other. Both ideas turned out to be very robust, and the "guns of Brook" with the southerners went!

The scheme of the device Brook guns with a two-layer bandage on the breech
Their production was established at the Tredegar Iron Works (sometimes called JR Anderson & Co, after the owner Joseph Reed Anderson) in Richmond, Virginia, and the naval arsenal in Selma, Alabama. But due to the fact that their capabilities were modest, in three years only about a hundred rifled guns of Brook's design in caliber six, seven and eight inches were made, as well as 12 powerful smooth-bore ten-inch guns and several 11-inch guns. 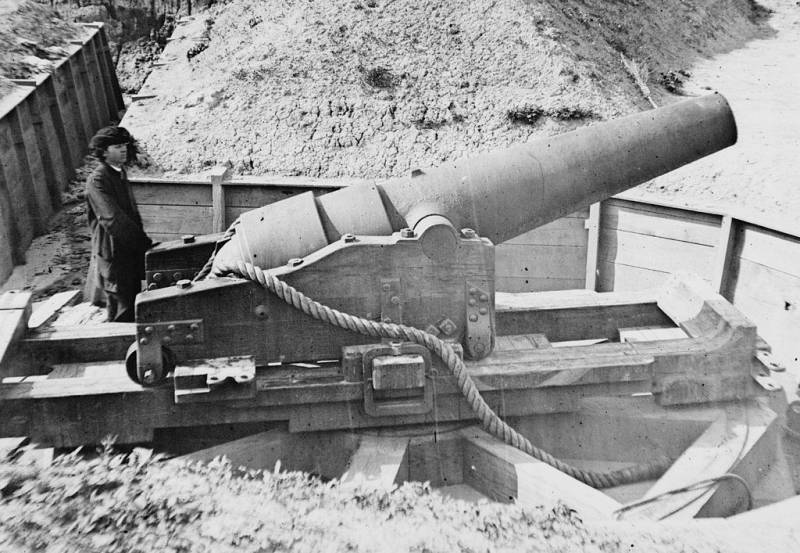 Brook's 8-inch (203-mm) gun with a two-layer bandage on the breech
Brook’s guns, as well as Parrott’s guns, were structurally very simple. They had a conical muzzle and a cylindrical breech. For simplicity, the trunks were made of cast iron, but one or two cylinders rolled from wrought iron strips were put on the area of ​​the charging chamber so that it would be affected by the high pressure arising from the shot. Since no southerners foundry could put a single thick-walled cylinder on the barrel like the Parrott design, a number of smaller rings were used, each usually 2 inches (51 mm) thick and 6 inches (152 mm) wide. All Brook’s gun trunks had seven right-handed rifling in the barrel. The shape of the charging chamber is a truncated cone with a hemispherical bottom, but with the 6,4-inch guns it was simply cylindrical. 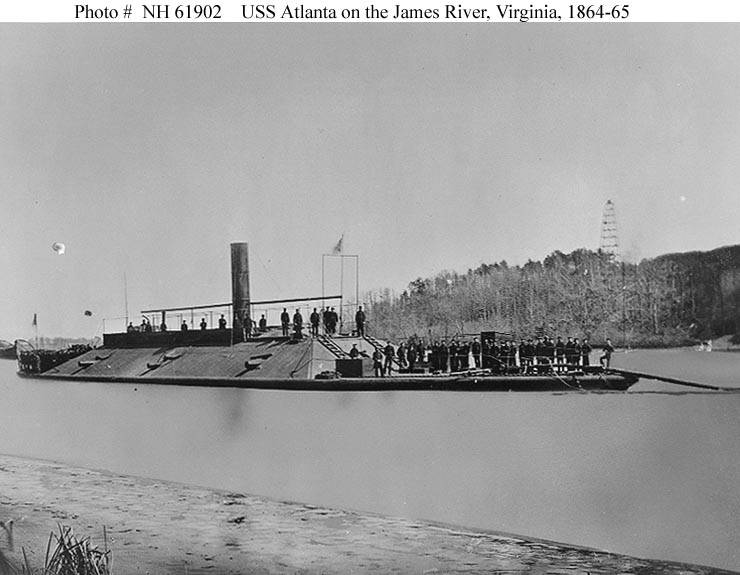 Armadillo Atlanta with Brook’s guns
But the southerners were let down not only by technology, but also by the production culture itself, which was low and therefore led to a high percentage of marriage. So, out of 54 seven-inch Brukovo guns made in Selma, only 39 were able to pass the tests successfully, and out of the 27 six-inch guns - only 15. However, it was bread, and therefore Sruzhans considered the Brook’s guns a very valuable weapon and tried to use them with maximum efficiency. In particular, two of these guns were installed on the first battleship of the southern states of Virginia. The battleships "Atlanta", "Columbia", "Jackson" also received two such guns, and besides them, also a number of other ships of the Confederation. By the way, the two guns that were mounted on the turntables of the battleship Atlanta have survived to this day and today are exhibited in the Willard Park of the Washington Naval Shipyard. 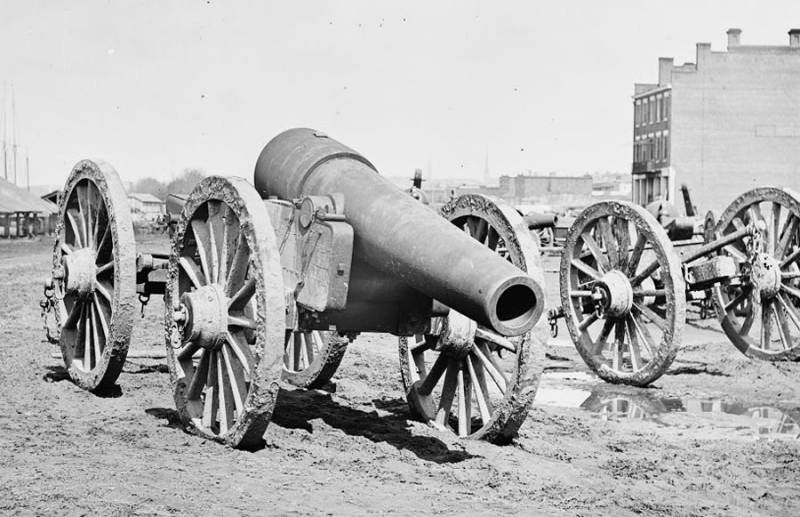 Brook's smooth-bore ten-inch gun captured by northerners in Richmond after the surrender of southerners
Brooke also designed a series of smoothbore trunks, which were produced in small quantities by all the same factories of Tredegar and Selma. Two guns survived, one of them located in the park at Columbia University in Washington. In 1864, Selma cast twelve 11-inch smoothbore guns, but only eight were sent to the front. One is located today in the city of Columbus, Georgia. 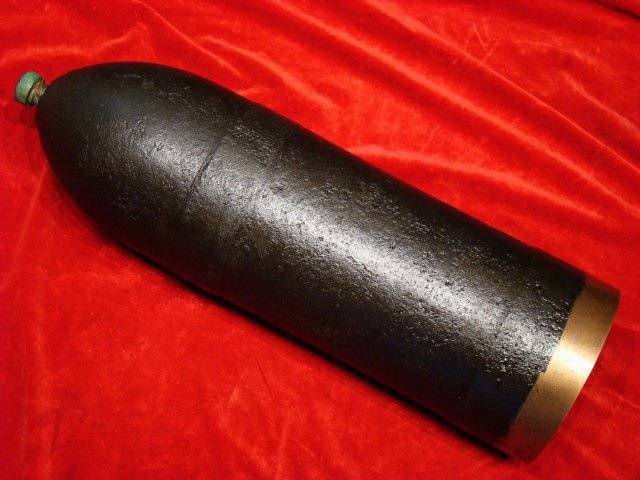 Brook's high-explosive shell. The copper plate in the bottom of the projectile, expanding due to the pressure of the gases, fit snugly against the rifling and made the shell rotate!
Brook's guns fired both armor-piercing and explosive shells of his own design. The former were a cylinder with a blunt nose, which had a sharp edge, in order (as F. Engels wrote about this at the time) to reduce the likelihood of a rebound when it hits the armor. In reports of that time they were often called “bolts”. Accordingly, the explosive shells were hollow cylinders with a rounded or pointed nose. They were filled with black powder and had the simplest fuse. Brook's smoothbore guns fired spherical nuclei at armored targets and hollow spherical explosive shells at unarmored targets.

But Norman Viard belonged to the opposite camp. He was a foundry master from Ontario, Canada, came from a family of blacksmiths and metalworkers, and was an inventor all his life. Before the war, he received a patent for a steam boat that could travel with passengers and cargo on ice and snowdrifts. He also patented a steam boiler that he sold to the US and Japanese governments for $ 72 and $ 000, respectively, and which was installed on 80 warships. fleet USA. 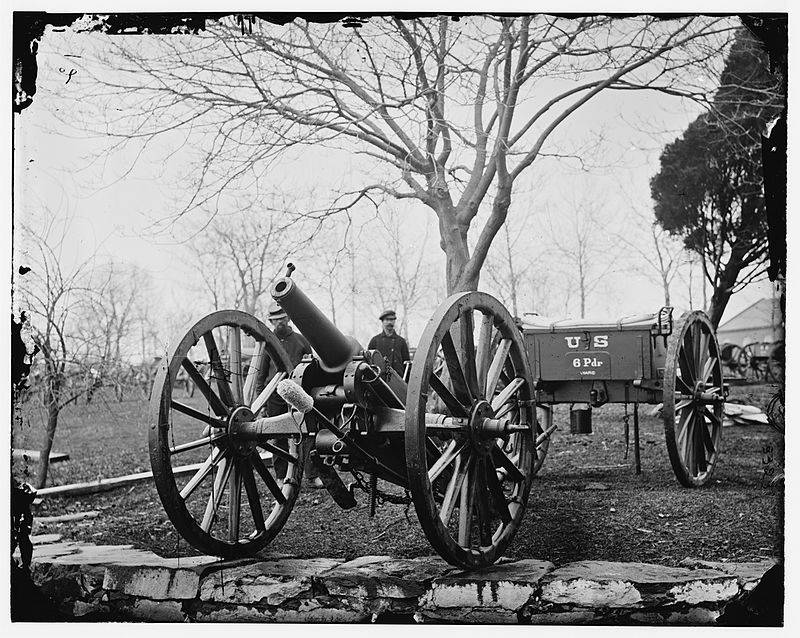 6-pound (2,72-kg) Viard cannon from Fort McNair, Washington
During the Civil War, Viard served as the head of the ammunition depot of the Union Army, which gave him the opportunity to know all the supply problems well. He really did not like the fact that the federal forces had "at least nine different calibres of rifled and smooth-bore guns," which made it very difficult to supply troops with ammunition. Therefore, he developed two unique cannons, which, in his opinion, could become a viable alternative to the needs of the North for field artillery: a 2,6-inch 6-pound rifled gun and a 4,62-inch smoothbore 12-pound howitzer. Between 1861 and 1862, during the American Civil War, about 60 of his guns were made at the O'Donnell Foundry in New York, and it was noted that “although the weapon is obviously excellent, it does not seem to be very popular ". He tried, albeit unsuccessfully, to create an ultra-powerful 20-inch (510 mm) gun and was able to produce two 15-inch (381 mm) rifled guns for the U.S. Navy, one of which was tested, but this gun was not produced in series. 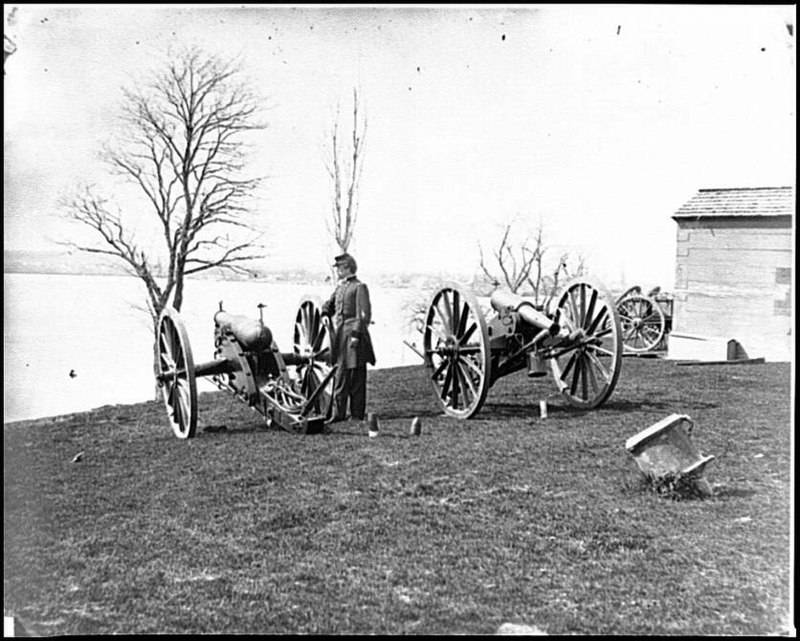 Two officers pose for a photographer next to Viard's cannons.
Shells were used weighing 2,72 kg design Hotchkiss. From all other muzzle-loading shells for rifled guns, they differed in some features of their design. The projectile consisted of a pointed warhead containing a bursting charge, put on its middle part of a zinc cylinder, and a pallet, which had a beveled front part that went under the zinc cylinder. Moreover, between the pallet and the head part there was a certain gap. When fired, powder gases pressed on the pallet, it moved forward and with its conical front part pressed from the inside onto the walls of the zinc cylinder. Naturally, they moved apart, pressed into the rifling, and then they drove the whole shell over it! 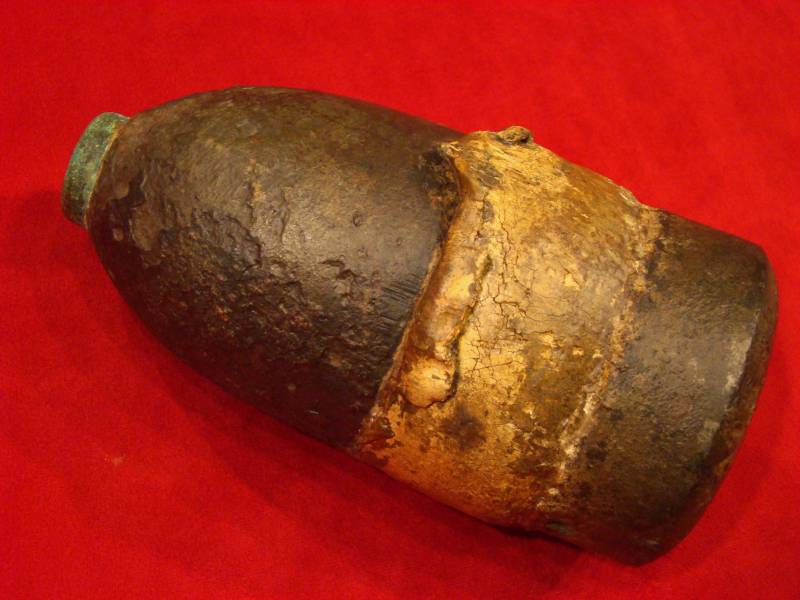 Hotchkiss shell. The long zinc cylinder, located in the middle part, is clearly visible and thus provides a very good obturation
The barrel was cast from pudding malleable iron and mounted on a specially designed Viard wheeled carriage. The gun mounts were spaced far enough apart so that the barrel could rotate freely on the pins. The designer added a long lifting screw, making shooting possible at an elevation of the barrel up to 35 °, that is, the gun acquired the property of a howitzer. Among the innovations can be attributed a flat base plate with a metal rib, which did not allow the coulters to bury themselves in the ground when returning, and a more successful carriage brake system. The recoil of the gun was therefore the smallest among all the other guns of the northerners, which, of course, was liked by the gunners, who at that time had to return their gun to its original place after each shot. Both the front and rear sights on the barrel had a crosshair for accurate aiming, and the rear sight could also be adjusted horizontally. 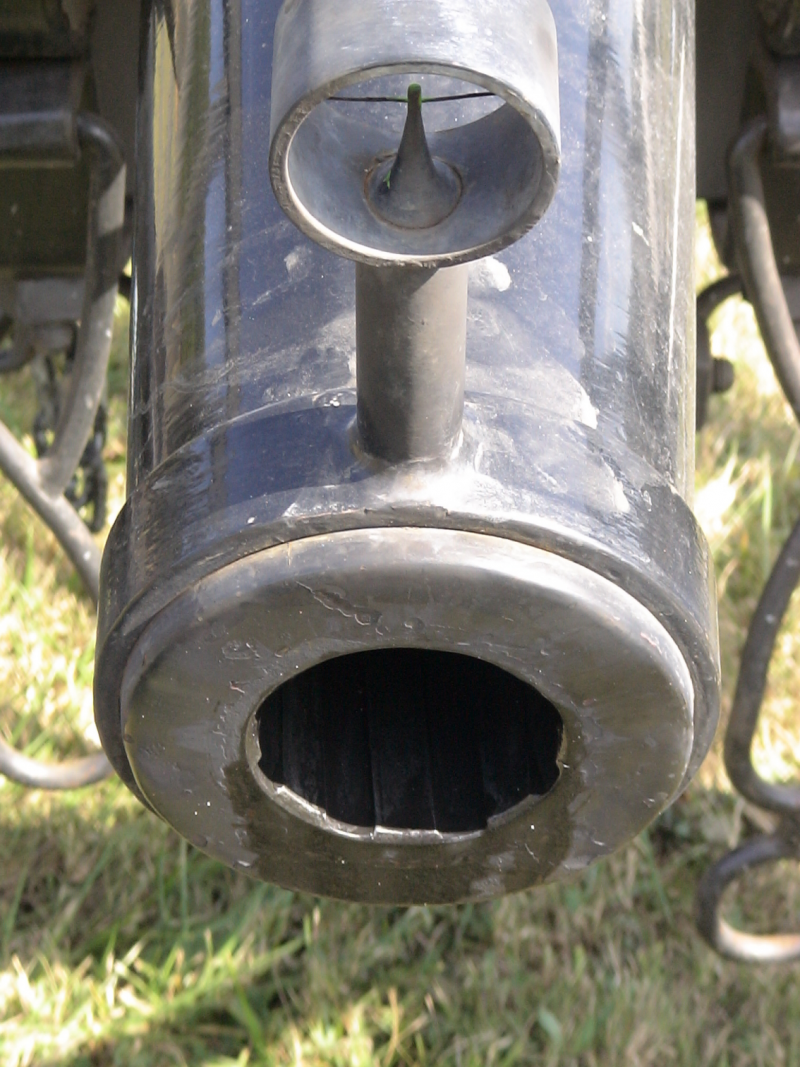 Muzzle Sight
In addition, Viard managed to come up with something that did not exist before him: a wooden wheel of enhanced maintainability, consisting of replaceable segments. Prior to this, all the wheels on the field gun mounts were solid. If such a wheel was damaged in battle, the gun could not shoot and the wheel was usually replaced. But it was a pretty, very laborious operation, especially under enemy fire. Viard's wheel consisted of segments that easily connected to each other. And if some part of the wheel was damaged, it was no longer necessary to remove the entire wheel from the axis. Only its damaged part was replaced. Interchangeable parts for small arms during the Civil War were already commonplace, but no one had ever seen removable wooden wheel parts. 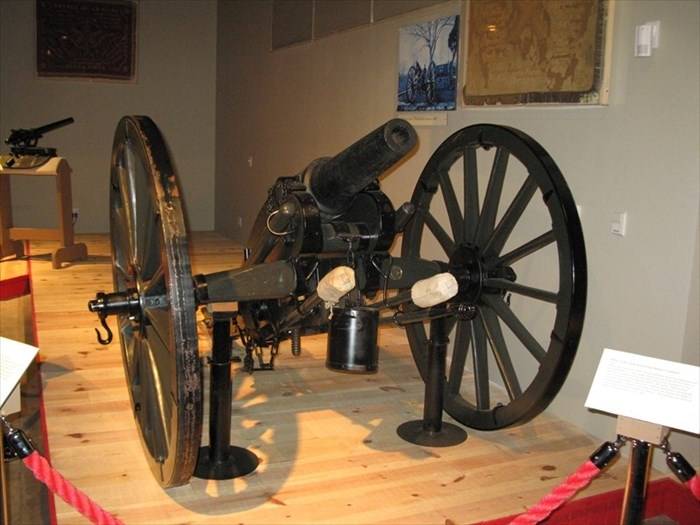 Viard's Cannon at the US Army Field Artillery Museum in Fort Silla, Oklahoma 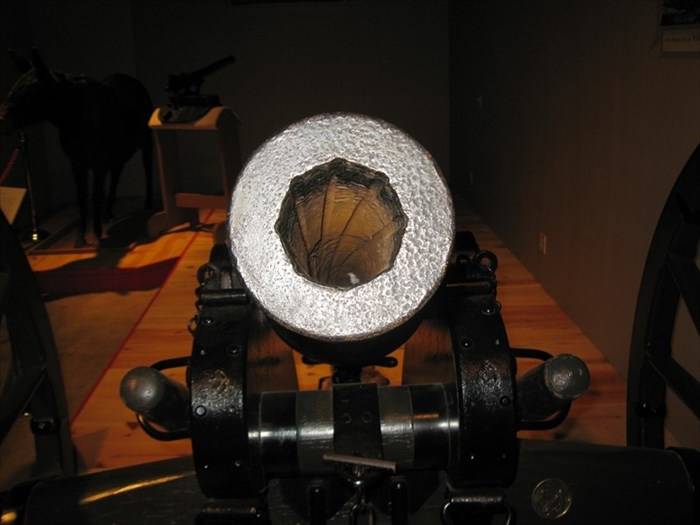 And here is clearly visible barrel cutting
Viard devoted much attention to studying the strength of guns and the influence of thermal expansion of the barrel on the possibility of its rupture during firing. The result was a contract concluded by the US Navy Arms Department under Rear Admiral John A. Dahlgren and Viard's company to produce two 15-inch (381-mm) rifled guns of about the same weight as a smooth-bore 15-inch (381-mm) Dalgren smoothbore gun. Viard at the same time had to pay 10750 dollars for each such weapon manufactured according to his design. But then the government had to buy them from him. As a result, perhaps one of the most complex and unusual tools that ever existed in the world appeared. The barrel, like that of Dalgren's Columbiad, was solid cast. But at the same time, its entire breech was penetrated by numerous narrow channels that served for cooling, the gaps between which played the role of stiffeners, reinforcing the trunk and having a peculiar S-shaped bend. Such a complex design possessed not only less weight, but also greater strength due to more uniform barrel cooling during casting. True, one of the guns “died” during the casting process, but the second one was successfully cast, and also successfully shot at the firing range. There were no further orders, although the picture with the proposed appearance of the 20-inch (510-mm) gun was preserved. 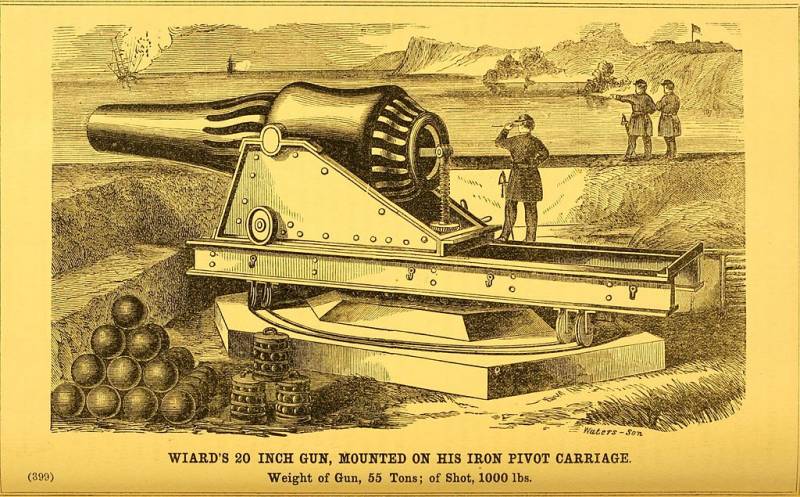 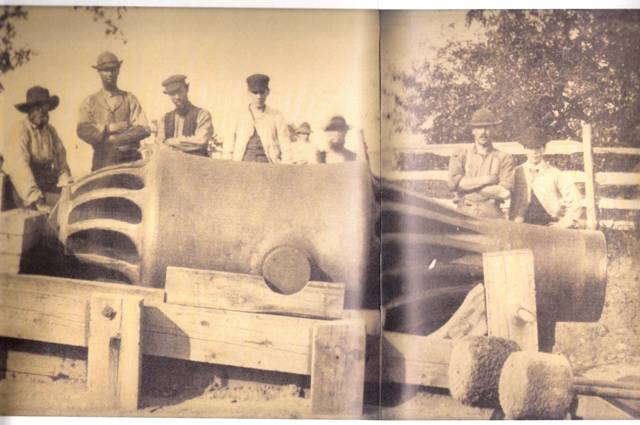 Photo of a completely monstrous 381 mm Viard caliber gun
At least 24 6-pound Viard guns have survived to this day. For example, one gun stands in front of the Fayette County Courthouse in Uniontown, PA, two at the U.S. Army Field Artillery Museum in Fort Silla, Oklahoma, four at Shiloh National Military Park and two at the Stones River National Battlefield in Tennessee. 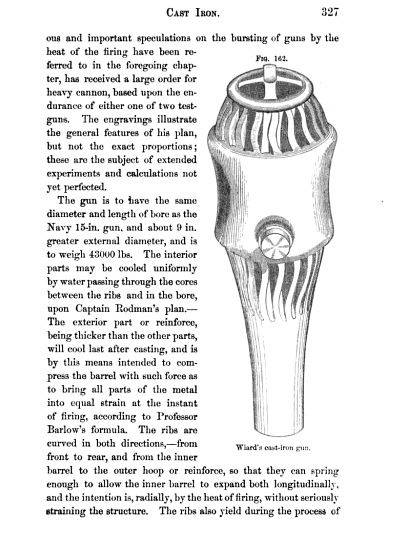 A page from Viard’s book where he talks about his 15- and 20-inch guns. Shows the appearance of the 15-inch barrel. 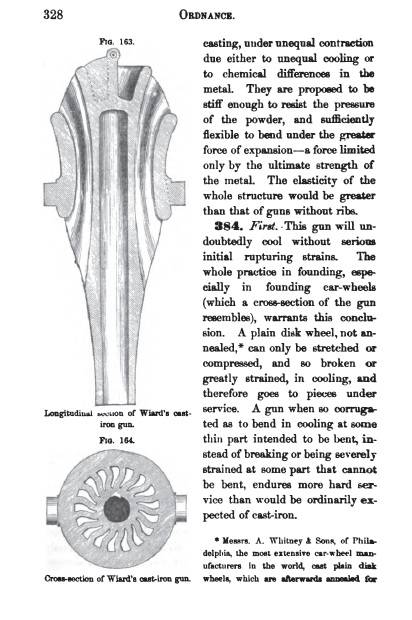 The same trunk in a section with all its ventilation ducts and stiffeners
He also developed a new 6-pound shell, which gave more than other shells, the number of fragments: 40-60 pieces. Another advantage of this was that this 6-pound projectile could be made at a lower cost than any other rifled shell. It was carried out on the basis of the Hotchkiss shell, so the guns fired him with amazing accuracy.

On October 1, 1862, Brigadier General Franz Siegel wrote to Wiard about his guns that “mobility, accuracy and range ... together with their remarkable field maintenance and repair capabilities make these guns a subject of universal admiration among officers and soldiers. In my opinion, your guns are superior to any field artillery I have ever seen. ”

Ctrl Enter
Noticed oshЫbku Highlight text and press. Ctrl + Enter
We are
"The parrot gun." Man and his instrumentPipes and rings
Military Reviewin Yandex News
Military Reviewin Google News
18 comments
Information
Dear reader, to leave comments on the publication, you must sign in.