Military orders and medals of the Soviet Union. Order of Suvorov 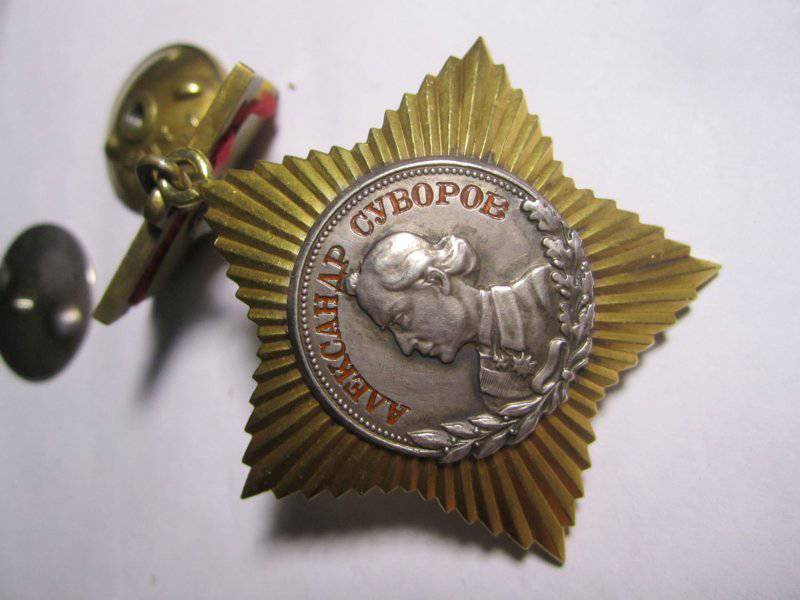 In July, 1942, changes occurred in the award system of the Soviet Union. 29 July was signed a decree on the establishment of a new military order, the first of all Soviet awards, which had three degrees. It is about the Order of Suvorov, who was the highest award among the "commander" orders of the USSR. The idea of ​​its creation appeared in June 1942, when the Red Army suffered severe defeats, and its position on the fronts was critical. The decree on the establishment of the new order was signed 2 day after the release of the famous Order number 227, known as "Not one step back!"

The technical committee of the main quartermaster department of the spacecraft, including its artist I. S. Telyatnikov, was involved in the development of new orders. Also, artists such as S.I. Dmitriev (the author of the Order of Lenin project and soldiers’s favorite For Courage medal), N.I. Moskalev, A.I. Kutuzov, who authored the Order of the Patriotic War, N.A. Karetnikov, decorative artist I.Ya. Gremislavsky, as well as architect Academician L.V. Rudnev (in the future he will create a project for the Moscow State University building located on the Lenin Hills). This team presented 55 sketches of future awards, of which only 11 was selected for further work. At this stage, P. I. Skokon, a student at the Moscow Architectural Institute, was brought to the assignment. By this time he had already managed to make war on the territory of Belarus as part of a sabotage group. As a result, the project of an architectural university student was recognized as the best.

It was this project that was made public in the description of the award, along with the decree establishing the order. However, at the suggestion of one of the employees of the mint, the appearance of the Order of Suvorov was somewhat modified. Thus, the Order of the I degree was supplemented with a small red star, which was located above the portrait of the Generalissimo, in order to make it more distinct from the Order of the III degree, which had the same color. Also, the size of orders of II and III degree was reduced by 7 mm relative to the Order of Suvorov I degree. Changes in the appearance of orders were legalized 30 September 1942 of the year. 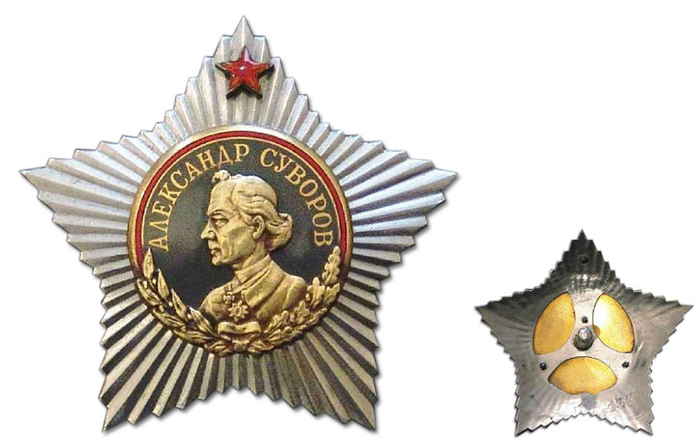 Order of Suvorov I degree

The badge of the Order of Suvorov was a five-pointed star, which had faceted rays. In the center of the order there was a circle with a rim and a portrait in profile of the famous Russian military commander. For the portrait of Alexander Suvorov, an engraving of 1818 was made by the artist N. I. Utkin. The inscription “Alexander Suvorov” was located above the portrait of Suvorov, under the portrait itself along the edge of the circle were embossed oak branches and laurel branches, which were tied with a ribbon. The orders of different degrees differed among themselves by material, size, and the presence of a small red star on enamel of the order I, enameled. The distance between the opposite rays of the order of the first degree was equal to 56 mm, the two remaining orders - 49 mm.

On the back of the order there was a nut and a pin, which were designed to fasten the order to military uniform and other clothes. A moire silk ribbon of green color was relied on to the order; the width of the ribbon was 24 mm. Orange longitudinal stripes were placed on the tape. On the Order of Suvorov I degree - one strip in the middle (width 5 mm), on the order II degree - two strips (width 3 mm each) along the edges of the tape, on the order III degree - three strips (width of each 2 mm) - one in the middle and two around the edges. 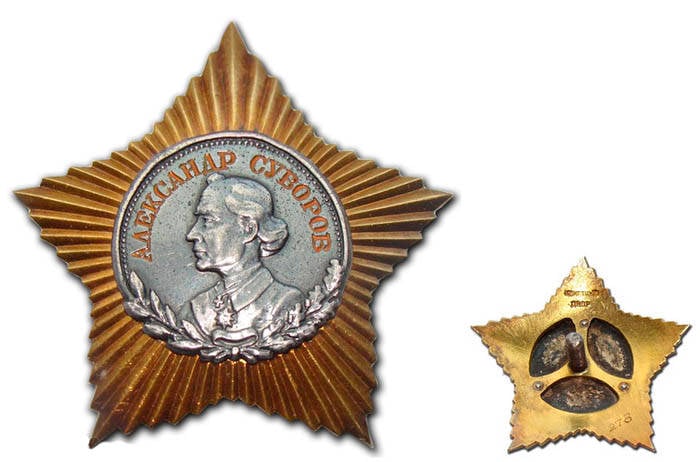 According to the established statute, the Order of Suvorov I degree was planned to reward the commanders of fronts, armies, as well as heads of arms of service, heads of operational departments and headquarters, their deputies. The basis for submission to the order was the skillful and competent actions of all the above-mentioned commanders during the organization and implementation of major army operations. The result of the operations to be carried out was to be a partial or complete defeat of the superior in number and strength of the enemy.

According to the statute, the Order of Suvorov II degree was planned to reward the commanders of corps, divisions and brigades for the skillful implementation of various types of military operations using well-coordinated interaction of different combat arms. The result of such an operation was to be the encirclement and the capture or destruction of most of the opposing forces of the enemy (his manpower), as well as the seizure of his weapons and military equipment.

According to the statute, the Order of Suvorov, III degree was planned to reward regimental commanders, battalions, their deputies, as well as company commanders. The Order was awarded to those who distinguished themselves for active resistance to the superior enemy, to retain the defended positions and objects, as well as to launch an attack with inflicting a tangible defeat on the enemy. 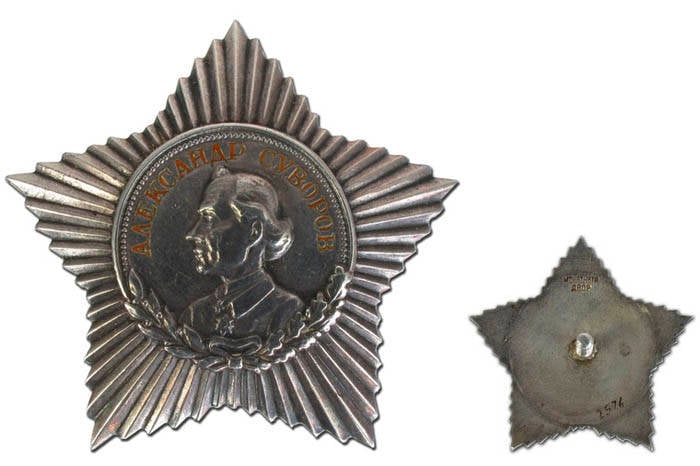 Order of Suvorov III degree
The first award of the Order of Suvorov II degree occurred 26 December 1942 of the year. It is worth noting that this was the first award of this order without regard to its degrees. Major II Badanov, a commander of the 24 tank corps from the South-Western Front, was introduced to the Order of Suvorov, II degree. He was awarded for skillfully conducted a deep raid of corps tankers to the rear of the enemy troops. This raid led to the defeat of the largest airfield near the station Tatsinskaya. With the help of this airdrome, the Germans carried out the supply of a group of troops surrounded in the Stalingrad area under the command of Paulus.

24-th tank the corps destroyed more than 200 German transport aircraft at the airport. Also in a five-day battle, the corps destroyed 84 German tanks and 106 artillery pieces, more than 11 thousand German soldiers, about 5 thousand enemy soldiers were captured. In the final stage, Badanov’s corps had to act in complete encirclement, from which he could escape on the night of December 28. This operation was highly appreciated by the rate, Badanov was awarded the Order of Suvorov, II degree, number 1, and the corps itself was renamed the 2nd Guards, and it was also called Tatsinsky.

Many outstanding commanders of the Red Army during the war were presented to two, and some even to three Orders of Suvorov II degree. For example, Katkov Fedor Grigorievich, who commanded the tank corps, became a knight of the 3's of the Orders of Suvorov, II degree. The first holder of the Order of Suvorov III degree was Major Zaran N. Garanin. He was presented for the 3 or 8 award in February 1943 of the year. Garanin was awarded the Order of Suvorov III degree for the number 1 for the skillful use of tactical experience and causing great damage to the superior forces of the enemy. 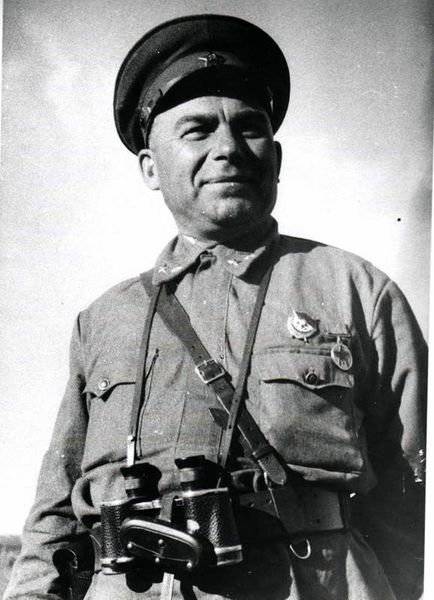 The Order of Suvorov II degree during the war was awarded 2863 times, including the 676 military units of the Red Army awarded to them. For example, for the liberation of Kiev to the order, the 1-I separate Czechoslovak brigade of General Ludwik Svoboda was represented, who in the future became the Hero of the Soviet Union, and after the war ended - the president of Czechoslovakia. The Order of Suvorov, Grade III, was awarded 4012 times during the war, including 849 times - to the formations and units of the Red Army. In total, during the years of the Great Patriotic War, 7266 awards were made by the orders of Suvorov of all degrees. Were among the award-winning and more 80 generals and officers of the armies of foreign countries.

Ctrl Enter
Noticed oshЫbku Highlight text and press. Ctrl + Enter
We are
"With such a general as Kutuzov, Russia can be calm"Military orders and medals of the Soviet Union. Order of Kutuzov
Military Reviewin Yandex News
Military Reviewin Google News
3 comments
Information
Dear reader, to leave comments on the publication, you must sign in.