Military orders and medals of the Soviet Union. Medal of Honor"

January 9 2014
36
The Medal "For Courage" - one of the most honorable Soviet soldiers' awards, is the state award of the USSR, the Russian Federation and Belarus. One of the few medals that even after the collapse of the Soviet Union (with minor corrections) was again approved in the system of government awards of the Russian Federation and Belarus. The medal "For Courage" was established on the basis of a decree of the Presidium of the Supreme Soviet of the USSR in October 1938. According to the statute of the award, the medal could be awarded to servicemen of the Red Army, Navy, internal and border troops for personal courage and bravery in defending the country and in the performance of military duty. This combat medal could also be awarded to persons who are not citizens of the USSR.


From the very moment of its appearance, the medal “For Courage” was very popular and was highly valued among front-line soldiers, since it was awarded this medal exclusively for personal bravery, which was shown during the fighting. This was the main difference between this award and some other Soviet orders and medals, which were often awarded “for participation”. Most of the medals "For Courage" was issued to the ordinary and sergeant composition of the Red Army, but there were also cases of awarding officers to them (mainly junior).

The author of the drawing of the medal “For Courage” was a Soviet artist S. I. Dmitriev. The first awarding of a new combat award was already made on October 19 1939. According to the signed decree, the person 62 was presented to the medal. Among the first recipients was Lieutenant Vasily Ivanovich Abramkin. Also October 22 1938 of the year, among the first recipients were the border guards N. E. Gulyaev and B. F. Grigoriev. 14 November 118 was presented to the medal. The next time a massive medal was awarded already in 1939, it was mainly awarded to soldiers and officers who distinguished themselves in battles against the Japanese at Khalkhin Gol. For the entire 1939 year, 9234 people were presented for this award. 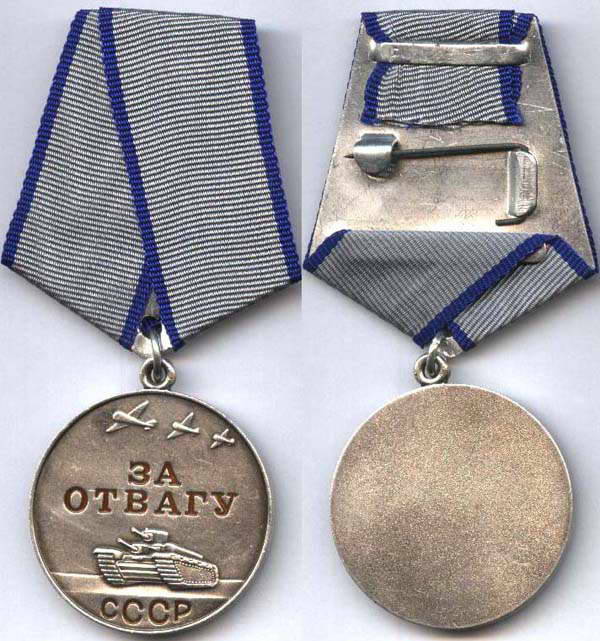 The Medal of Honor was the largest among Soviet medals, with the exception of the medal 50 Years of the Armed Forces of the USSR. It was round, the diameter of the medal was 37 mm. On the front side of the For Courage medal was an image of three aircraft flying one after another, the wingspan of the first machine was 7 mm, the second 4 mm, the third 3 mm. Directly under the flying aircraft was the inscription "For Courage", which was located in two lines. Red enamel was overlaid on the letters. Under the words "For Courage" was an image tank T-28, the width of the tank was 10 mm, length - 6 mm. Under the T-28 along the bottom edge of the award was the inscription "USSR", these letters were also covered with red enamel.

On the circumferential face of the medal there was a slightly protruding rim, having a width of 0,75 mm and a height of 0,25 mm. With the help of a ring and an ear, the medal “For Courage” was connected to a pentagonal shoe block, which was covered with gray silk moire ribbon, and there were two blue stripes along the edges of the ribbon. The overall width of the tape is 24 mm, the width of the strips is 2 mm. With this pentagonal pad, a medal could be attached to a uniform or other clothing.

The Medal "For Courage" was the second time institution of the USSR military battle medal after the medal "The XX Years of the Red Army". At the same time, she was the highest medal of the USSR and, when worn, was strictly in front of the other medals (by analogy with the Order of Lenin in the system of orders of the USSR). Since the medal was mainly awarded for the accomplishment of a personal feat, it was mainly awarded to private and non-commissioned officers of units and subunits, rarely junior officers. The senior officers and especially the generals of this medal were practically not awarded. 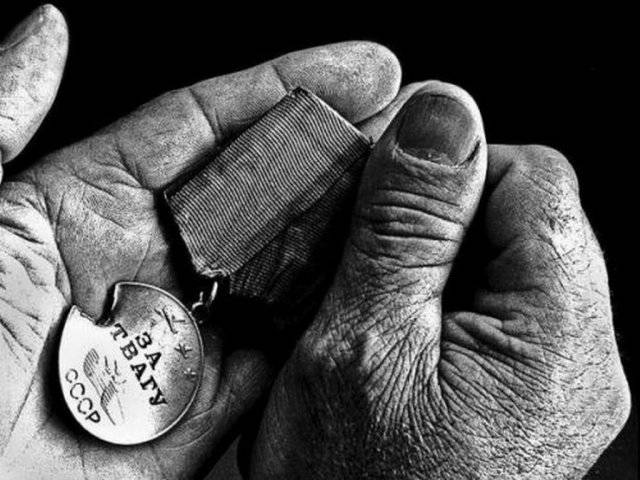 After 1939, the next massive award for the Medal of Courage medal took place during the Soviet-Finnish war. All in all, before 22 June 1941, about 26 thousands of servicemen were awarded with this medal. During the Great Patriotic War, the award for the Medal of Courage medal acquired a massive character and a very large scale. In total, for the exploits that were accomplished during the Second World War, 4 million 230 thousand medals were awarded with the medal "For Courage". Many Soviet soldiers were awarded several times.

Among those awarded the medal "For Courage" were many Soviet women. There are cases when the fair sex was presented to the medal "For courage" several times. For example, Moiseeva Larisa Petrovna (the maiden name of Vishnyakova) started the Great Patriotic War as a medical assistant, and finished off with a telephony operator. She served in the 824-m separate reconnaissance artillery division. During the war years Larisa Moiseeva was awarded three medals "For Courage", in addition, she had the Order of the Red Star.

The youngest gentleman ever awarded this award was a pupil of the 142 Guards Rifle Regiment Sergei Aleshkov, who was only 6 years old! The men of the 47 Guards Division picked up the lad in the summer of 1942, they found him in the forest. Sergey’s brother and mother were brutally tortured by the Nazis. As a result, the soldiers left him in their unit, and he became the son of the regiment. In November, 1942, he and the regiment went to Stalingrad. Of course, he could not fight, but he tried as much as possible to help the fighters: he brought water, bread, cartridges, and sang songs in between fights and recited poems.

In Stalingrad, Sergei Aleshkov received a medal "For Courage" for the rescue of the regimental commander Colonel Vorobyov. During the battle, Vorobyov had collapsed in his dugout, Seryozha tried to dig out the commander himself, tried to rake a blockage, but soon realized that he simply didn’t have enough strength to do this, after which he began calling for the help of the unit’s fighters. The soldiers came in time were able to dig out the commander from under the rubble, he survived. In the future, he became the adoptive father of Sergei Aleshkov.

Another regiment's son, Afanasy Shkuratov, joined the 1191 Infantry Regiment at the age of 12. By the end of World War II he had two medals "For Courage". He received the first award during the fighting in the Vitebsk region for the city Surozh. Then he bandaged and delivered Major Starikov to the medical battalion, who was seriously wounded in battle. He received his second medal for his personal courage, which he showed during the fighting on the Mannerheim Line in Karelia.

After the end of World War II, the medal “For Courage” was awarded much less frequently, since the USSR was not officially in a state of war. Despite this, in 1956, a large enough group of Soviet soldiers was awarded for suppressing a “counter-revolutionary rebellion” in Hungary. Only in the 7 Guards Airborne Division 296 people received awards. The second mass medal award "For Courage" took place already during the Afghan war. Thousands of Soviet soldiers and officers who participated in this conflict were awarded various military awards, including this medal. In total, before the collapse of the USSR, 4 569 893 awards were carried out.

Ctrl Enter
Noticed oshЫbku Highlight text and press. Ctrl + Enter
We are
"For service and courage" "He was given for courage and loyalty to his native land."Military orders and medals of the Soviet Union. Medals of the series "For Defense"
Military Reviewin Yandex News
Military Reviewin Google News
36 comments
Information
Dear reader, to leave comments on the publication, you must sign in.