Military orders and medals of the Soviet Union. Order of the Red Star

December 24 2013
42
One of the most desirable and affordable military awards for soldiers and officers of the Red Army was the Order of the Red Star. This government award was approved by a decree of the Presidium of the CEC of the USSR of 6 on April 1930, a little later in May of the same year the statute of the order was approved. The name of this award itself eloquently said that the order was intended to cap the combat exploits of the soldiers and officers of the Red Army, as the red star was the hallmark of Soviet servicemen.


This order was established to award for great services, which were manifested in the defense of the country not only in wartime, but also in peacetime, merit in ensuring the security of the state. The Order of the Red Star could be awarded not only to servicemen, but also whole military units, formations, formations, warships, enterprises, organizations, institutions. In addition, military personnel of foreign countries could be represented for this Soviet award.

The authors of the sketch for this sign were the artist V. K. Kupriyanov and the sculptor V. V. Golenetsky, who had previously worked on the Order of Lenin. The Order of the Red Star, as you might guess, was a five-pointed star, which was covered with ruby-red enamel. In the very middle of the award was a shield on which a Red Armyman in a Budenovka and a greatcoat was depicted, holding a rifle. On the rim of the shield there was an inscription: “Proletarians of all countries, unite!”, At the bottom of the rim there was an inscription: “USSR”. Directly under the shield was a sickle and hammer. The image of the Red Army man, the shield itself, the sickle and hammer, the inscriptions, as well as the edges of the star, were oxidized. 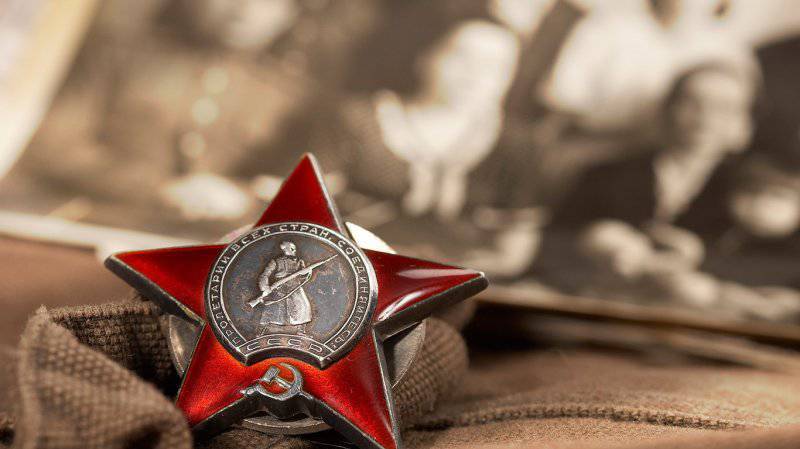 This award was made of silver. As of September 1975, the order contained 27,162 ± 1,389 g of silver, and its total weight was 33,250 ± 1,620 g. The size of the order varied depending on the year of production. The distance between the opposite vertices of the star was in the range from 47 to 50 mm. The distance from the center of the Order of the Red Star to the top of any of the 5 rays of the star was 26-27 mm. On the back of the order was located a threaded pin with a nut for attaching it to a uniform or clothing.

The Order of the Red Star, the number one 13 of May, 1930 of the year, was received by the famous Soviet military leader, the hero of the Civil War, V. K. Blucher. The one who, even during the war, was awarded the first Order of the Red Banner in the USSR. However, in 1930, V. K. Blucher was awarded for other events. Commanding the troops of the Special Red Banner Far Eastern Army, Blucher managed to carry out an excellent operation to eliminate the armed conflict on the CER-China Eastern Railway, which appeared in the summer of 1929. In the summer of 1929, the Chinese authorities, yielding to militaristic sentiments, decided to take control of the CER under their control, before the railroad was controlled jointly by the two countries. As a result of the action, thousands of Soviet citizens — Soviet workers and workers — were arrested and thrown into Chinese prisons. However, the army commanded by V. K. Blucher was quickly able to give a fitting rebuff to the Chinese military and was able to restore the position that existed even before the outbreak of the military conflict.

Also among the first Soviet citizens who were awarded the Order of the Red Star were participants in a large flight that took place in September 1930 on the route Moscow - Ankara - Tiflis - Tehran - Kabul - Tashkent - Moscow. The total length of this route was 10,5 thousand km, and the flight itself was called the “Big East”. The flight was the hardest test not only for modern Soviet aircraft, but also for the people who drove them. The flight often took place at an altitude of more than five thousand meters above the mountains, often without any visible landmarks and prepared landing sites. All participants in this flight, including a journalist who was involved in its coverage and played the role of an observer pilot, were awarded orders of the Red Star. 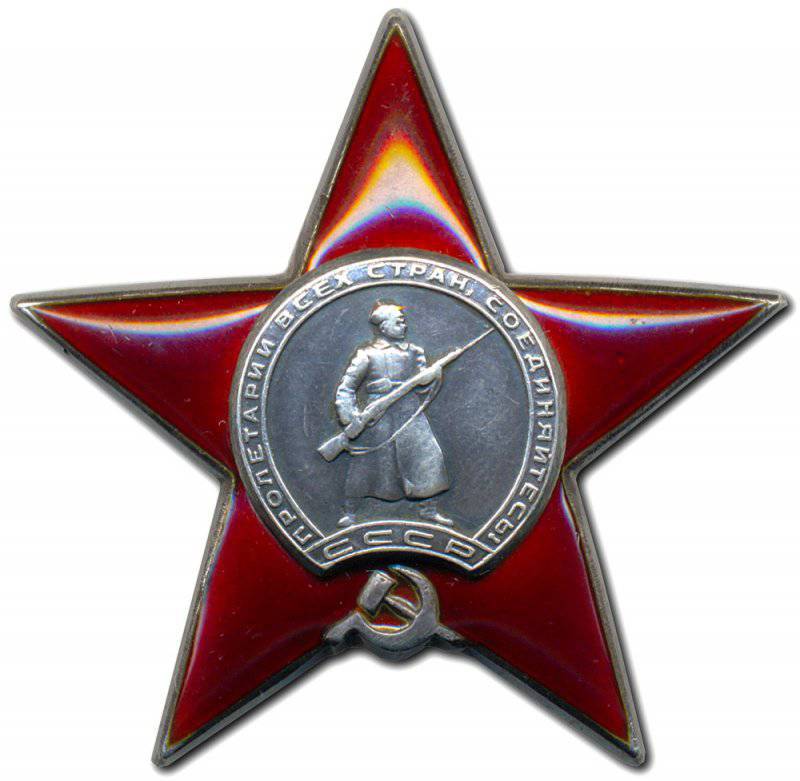 In the years of the Great Patriotic War, the Order of the Red Star became one of the most popular Soviet awards. To this order was presented about three million people who received an award for their resistance and courage in the fight against the Nazi invaders. Also, the order was presented immediately 1740 formations, units and institutions of the Red Army, rear teams and most of all foreign formations that fought alongside the Red Army (14 Polish and Czechoslovak divisions and units).

In addition to Soviet soldiers, this order was also awarded to allied soldiers and officers, in particular, sailors and pilots of polar convoys. For example, 22 in March 1944 of the year, the English captain Guy O'Mond was presented to the Order of the Red Star for successfully managing the reception and shipment of allied convoys with military equipment and goods necessary for the USSR. In total, since the beginning of World War II to June 1944, this award was marked by 182 foreign military personnel.

After the war, the authority of this military award decreased because, starting from 1944, the Order of the Red Star began to be awarded to all servicemen for years of service (for 15 or more years of impeccable service). This award procedure was canceled only in the 1958 year, which, in turn, again helped to raise the prestige of the order. Since the Order of the Red Star could be awarded again for new distinctions in service and exploits, as well as for years of service, a sufficient number of Soviet soldiers and officers became multiple gentlemen of the Order of the Red Star. Since the end of the 1940-s and until the middle of the 1980-s, this award has been handed over 800 thousands of times, received by soldiers and officers of the Soviet Army, police officers, warriors for feats they performed in peacetime. In total, before the collapse of the Soviet Union, 3876740 awards were made by the Order of the Red Star. At the same time, this award remained one of the few in the USSR, which for all the years of its existence almost did not change its appearance.

The largest number of awards for this order was 6. So, six orders of the Red Banner had retired lieutenant colonel Vasily Vasilievich Silantyev. The technician-lieutenant Silantyev received his first order in August 1943 for the distinction shown in the Oryol operation. The lieutenant first rescued the wounded tankman from the wrecked tank T-34, and later drove the damaged German T-4 tank into the location of the Soviet units. He received his second award when crossing the Dnieper in October of that year. He received the third award on September 13, 1944 for the differences shown in the Proskurov-Zhmerinsky operation. The officer received the fourth order for the capture of Berlin and the battles for the liberation of Prague. After the end of World War II, he remained in military service, continuing to serve in armored forces. Vasily Silantyev received 2 more orders of the Red Star for his long service and many years of impeccable service in the ranks of the Soviet Army. 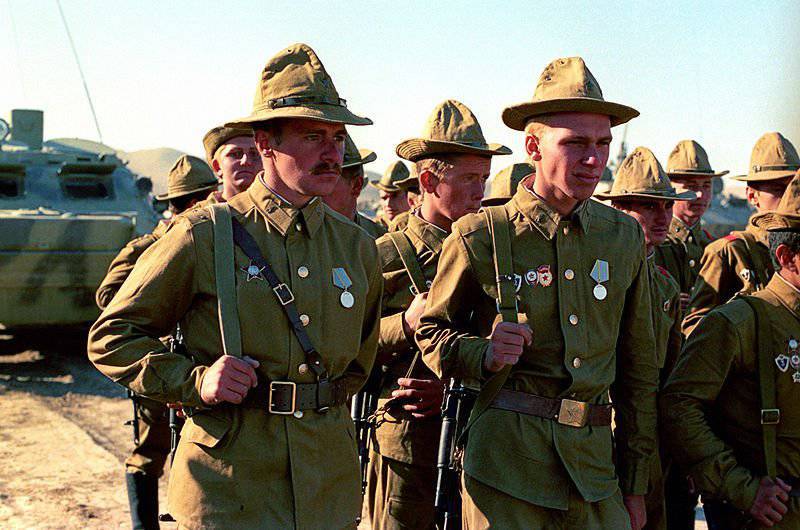 Also deserves special attention the case of awarding the Order of the Red Star in 1955 year. Many of you know about the heroic battle of the cruiser "Varyag" and the gunboat "Koreyets" with the Japanese squadron, which occurred 27 January 1904. Half a century after this date, the 45 survivors of that tragic battle were presented with the “For Courage” award, the award took place in 1954 and was timed to the 50 anniversary celebration of this feat. The following year, 1955, part of the award recipients were also presented with the Order of the Red Star for participating in the uprising of the battleship Potemkin. The award was also made in honor of the 50 anniversary of this significant revolutionary event. For example, the former fireman on the Varyag cruiser Pyotr Yegorovich Polyakov was presented to the Medal of Courage medal in 1954, and in the 1955 year he received the Order of the Red Star as a participant in the events on the battleship Potemkin in 1905.

Ctrl Enter
Noticed oshЫbku Highlight text and press. Ctrl + Enter
We are
"For service and courage" "He was given for courage and loyalty to his native land."Military orders and medals of the Soviet Union. Medals of the series "For Defense"
Military Reviewin Yandex News
Military Reviewin Google News
42 comments
Information
Dear reader, to leave comments on the publication, you must sign in.